February 21, 2008:  I went over to help Wendell this Thursday evening after returning from my recent business trip.  It was raining today and no additional flights were made.  The assignment tonight was to help Wendell get the ailerons properly rigged again and confirm the UP position of the flaps.  He has been concerned with a heavy left wing.  I had researched the issue and realized there may need to be some trim modifications made to the right aileron.   It seems that a number of quick-build RV-8's have had the same issue.  I spoke with a builder/pilot from Memphis, Tennessee after seeing his story on the Van's Air Force online forum.  Before doing the final adjustments to the right aileron, there are still a few flight tests to be made. 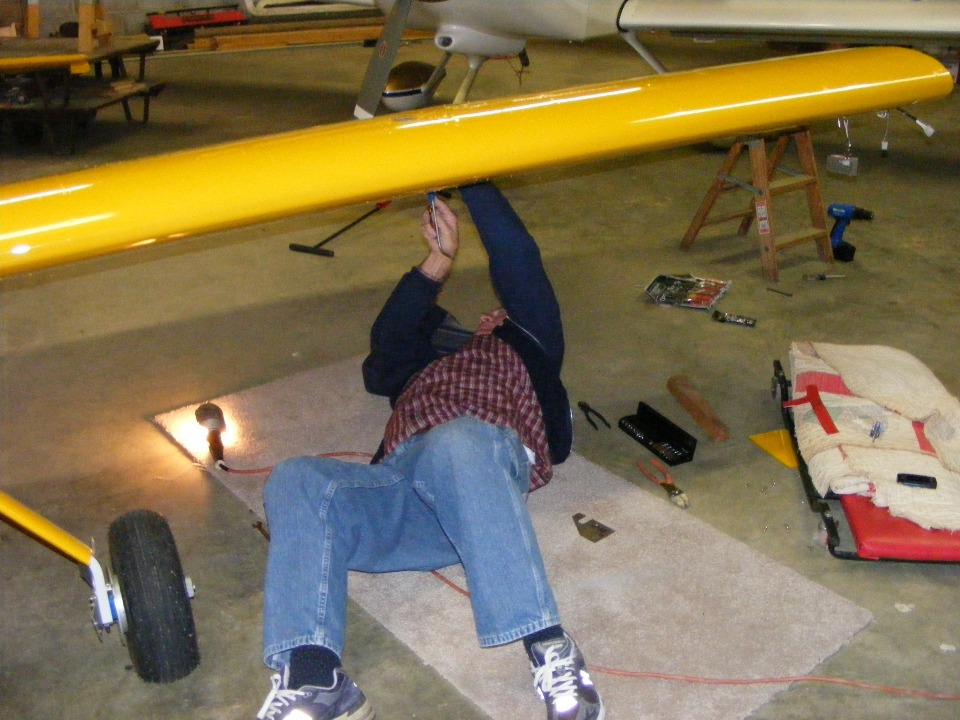 February 23, 2008:  Saturday afternoon found me once more helping Wendell with his airplane.  The focus today was on the encoding altimeter connected to his radar transponder.  The first thing to do was to test his unit on my airplane.  I disconnected the static air tubing from MY instrument panel and put on a new piece of plastic tubing which I used to simulate the lower pressure of flying at altitude.  With the avionics master switched on, I demonstrated to Wendell the normal pressure altitude display on my GTX-327 transponder.  I then connected his encoder to my system and it also displayed on my radar transponder.  After that was done, we removed his instrument panel to allow full access to all the connections on the back of his Garmin 330 transponder basket.  Every pin connection was confirmed going to the encoder with a digital volt-ohm-meter.  The last thing to do before the end of the session was to put the instrument panel back into his airplane, power up the transponder, and confirm the presence of power to the gray cable connecting to the altitude encoder.  Those power connections were good.  By now, the evidence points to internal issues with the GTX-330 transponder.  One more flight will be conducted to see if there was a faulty connection prior to this day's tests.

February 24, 2008:  This Sunday started out with less than ideal weather, but cleared enough to get in a flight in the afternoon.   Wendell rode down the runway on his golf cart and confirmed it was dry enough to get in a flight today.  He really wants to know how much the re-alignment of the ailerons may have helped his heavy left wing condition. 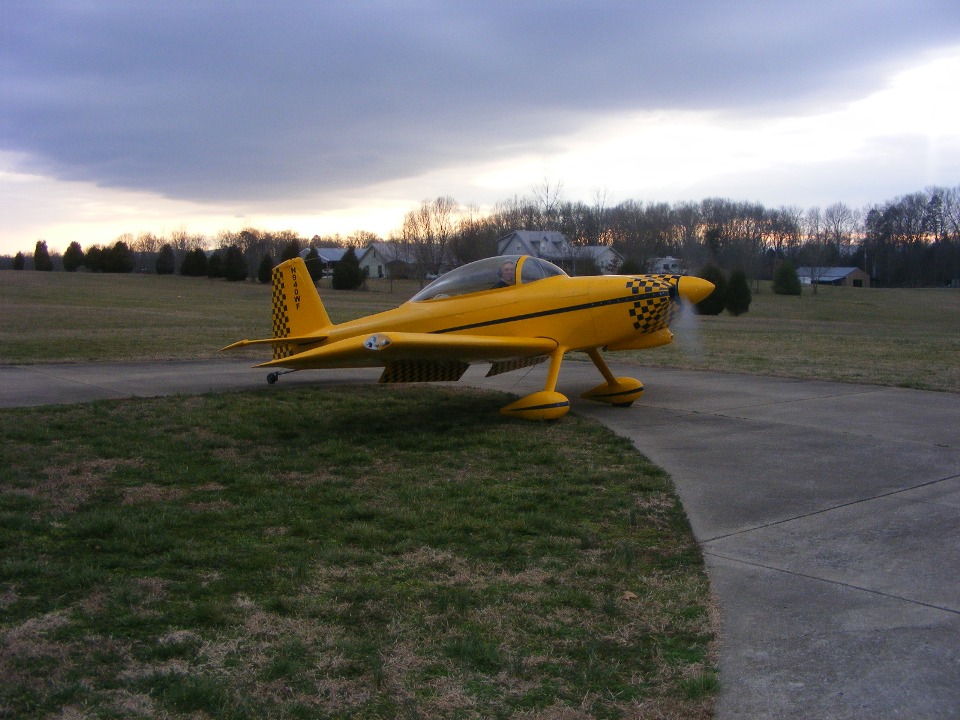 Here is the usual runup test at the north end of the runway. 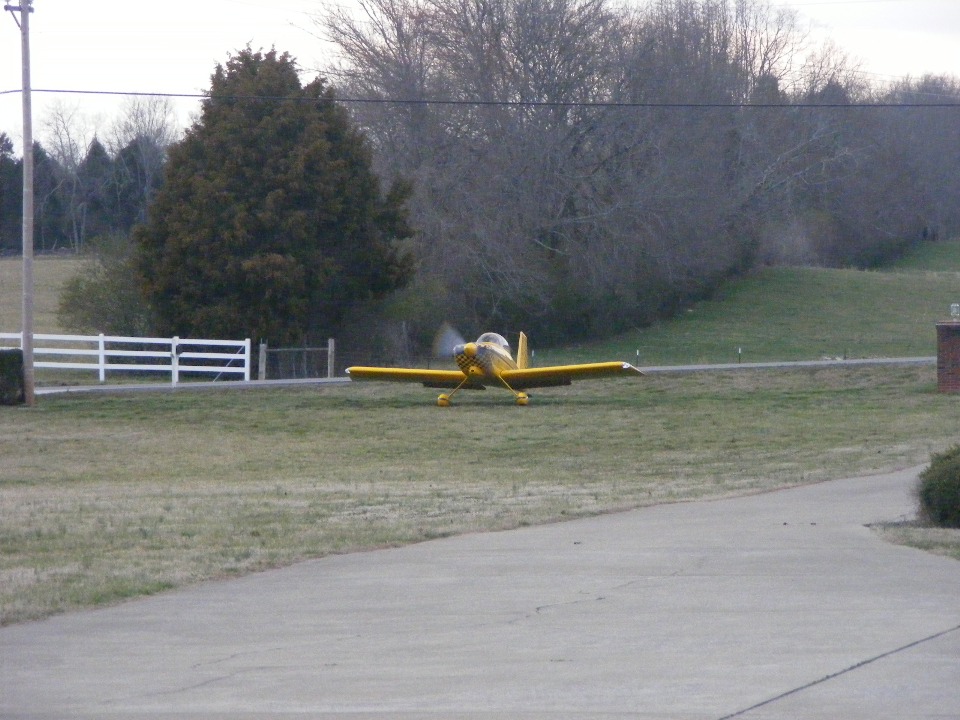 And we have LIFTOFF just past the hangar. 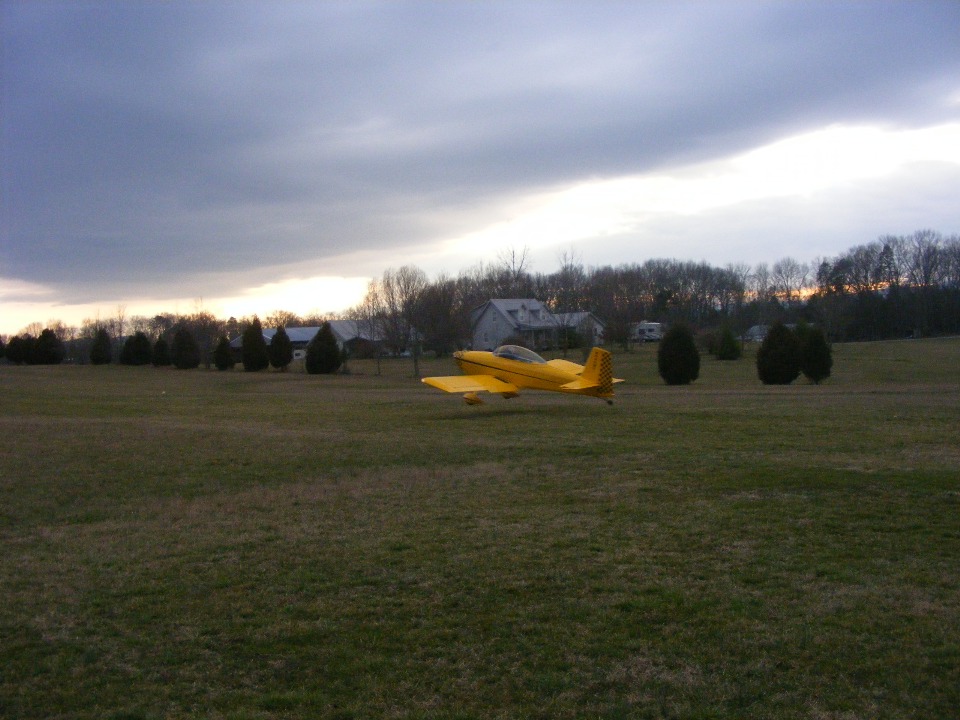 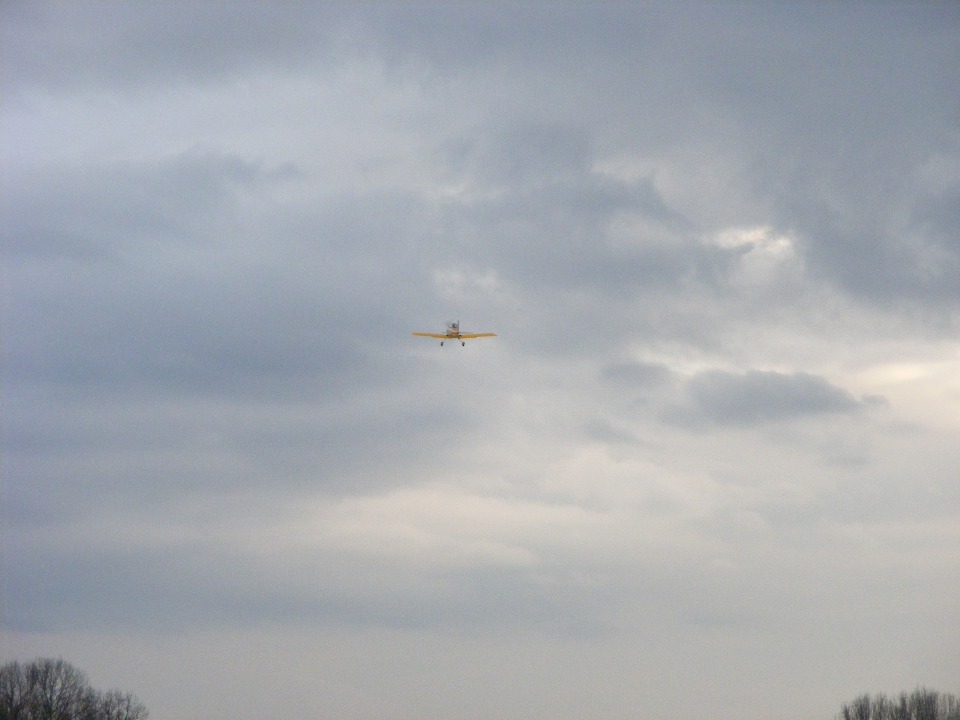 For the remainder of Wendell's flight, you have to jump to MY PAGE 253 where we get the first air-to-air photos of Wendell's airplane flying in the area near LaFayette, Georgia.

At the end of the flight, it is time to begin the first oil change on his new engine.  I pulled out my bucket and drain hose to make it an easy job.  Wendell will let the engine and oil filter drain overnight, replace the filter tomorrow, and fill the crank case with new oil. 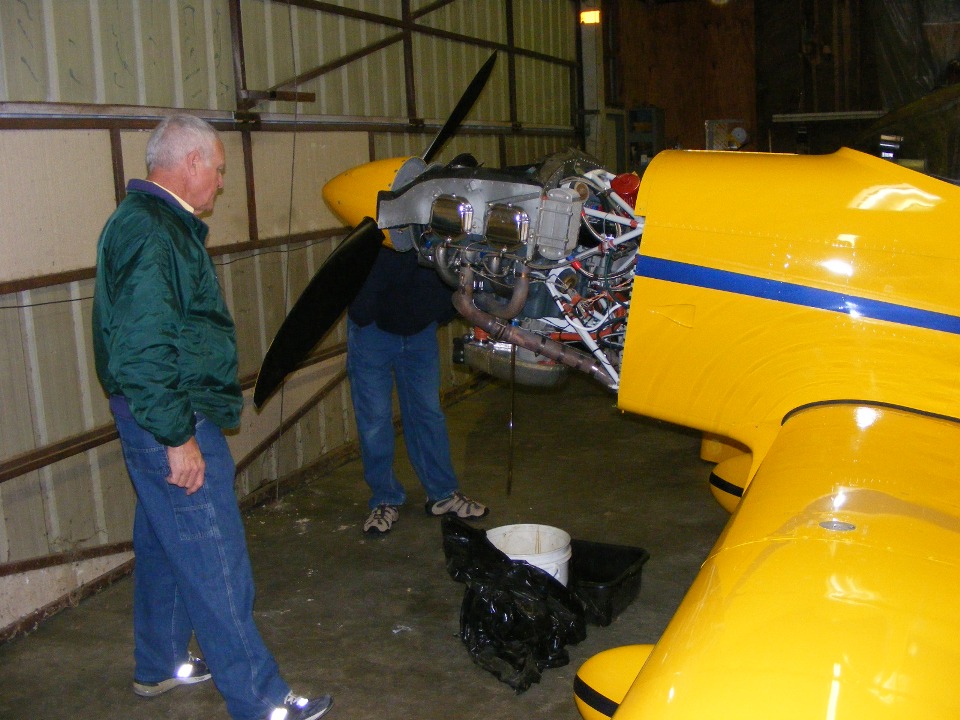 February 25, 2008: I went over to Wendell's tonight to get his last few problems cleaned up.  I called Pacific Coast Avionics before they closed their doors today.  I love being in the Eastern Time Zone and calling the Pacific Time Zone.  I spoke with Chris Brand there and he had the answer to the missing altitude information from the encoder.  The unit needed to have the strobe line tied to chassis ground.  He identified the color of the wire from the DBM-15 connector cable.  Sure enough, that wire had NOT been connected to anything.  A short warm up was required, but finally the encoder was doing its thing and the pressure altitude readout came alive on the Garmin GTX-330 radar transponder.

Next was the autopilot issue.  With the wing tip off and the instrument panel disconnected it was easy to check continuity to the wing-leveler servo.  I found a wire I had placed in the wrong position where the servo plug meets the wiring from the Trio EZ-Pilot.  Another quick check after the correction and the servo came to life.

And the last item of the evening session was trim for the right aileron.   I showed Wendell how to make a wedge-shaped trim block and it was taped to the underside of the right aileron near the flap.  If it does the job, then a more permanent solution will be implemented. 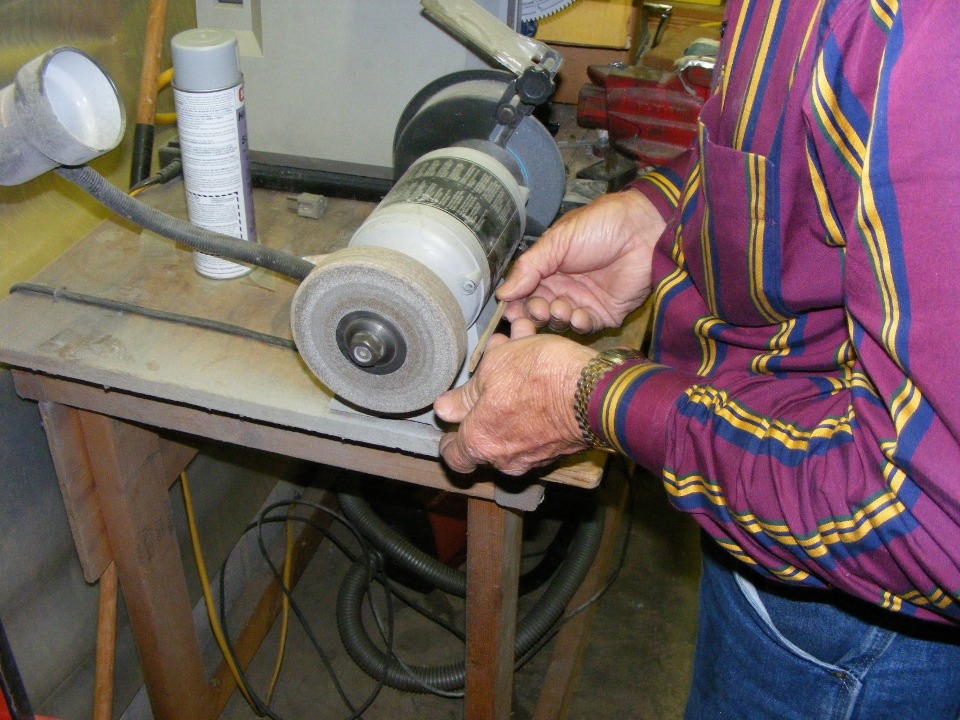 The weather forecast for tomorrow may not allow for more flight testing.  When I left Wendell, he was ready to try out the autopilot and get a good report on his mode C altitude reporting.  And of course, he wants to see if the "heavy left wing" has finally been cured, or reduced by the addition of the trim strip to the right aileron.

March 1, 2008:  This short entry will complete this page with my usual format of eight photos and text per page.   The calls I got from Wendell while I was on the road confirmed that the trim tab applied to the right aileron was a bit too large.  He landed at Collegedale and cut the thing in half and flew it one more time.  One final trim of 1/8" off the length of the wooden wedge and the airplane had no more turning tendencies.  He was happy with the hands-off trim of the airplane.

The altitude encoder was still not being reported to the Chattanooga approach radar operators.  It sounds as if there may still be a programming issue to be resolved or a button not being pushed on the radar transponder.

Wendell went through the ground setup procedures for the Trio autopilot to get the servo centered.  He tried the autopilot and had problems before reading the instructions to center the servo.  This was one lesson he learned without my coaching.  By the time I returned from my Florida trip, he was ready for another test flight to center the aileron servo in flight.  That was the last step before the autopilot is ready to operate in cruise flight.

I went over to the hangar for my usual Saturday afternoon session with Wendell.   I got out the Garmin GTX-330 installation manual for the radar transponder and programmed his N-number into its memory and checked the other setup menus looking for why the altitude encoder data was not being added to the transponder code.  The previous "N12345" code was put in by the folks at Pacific Coast Avionics to test the unit when they built the radio stack for Wendell's avionics order via Van's Aircraft.  By the time I had been through all the setup menus, I had not found anything that would prevent the altitude encoder data from being sent to approach control radar sites.

The weather was beautiful.  Only a rain-soaked runway would prevent a flight.  Wendell jumped on the golf cart and rode down the runway to check its condition.  He came back with that grin on his face to indicate he would launch another test flight to check the radar transponder and do the final in-flight trim of the wing-leveler servo.  I got out my aviation walkie-talkie to listen to his radio messages with Chattanooga approach.  He departed to the south away from the Class C airspace since he is prohibited from it until his 40 hours of phase 1 tests are completed.   By the time we heard him on the radio, it was apparent that he had been trimming the autopilot settings when he was south of the field.  He called approach when he was at a higher altitude and could avoid the Class C airspace.  They confirmed his MODE C altitude reporting was being received.

Finally, everything that had been a "bug" with the aiplane was resolved.  We heard Wendell fly over the field  on a southeast heading and it appeared to be toward the Dalton Airport.  A post-flight debriefing confirmed that was the portion of the flight with the autopilot engaged and tracking a GPS course line.   Wendell had a few questions about the engine monitor computer and I reviewed its operation on the ground as seen below.  It had been a productive flight with the last items resolved. 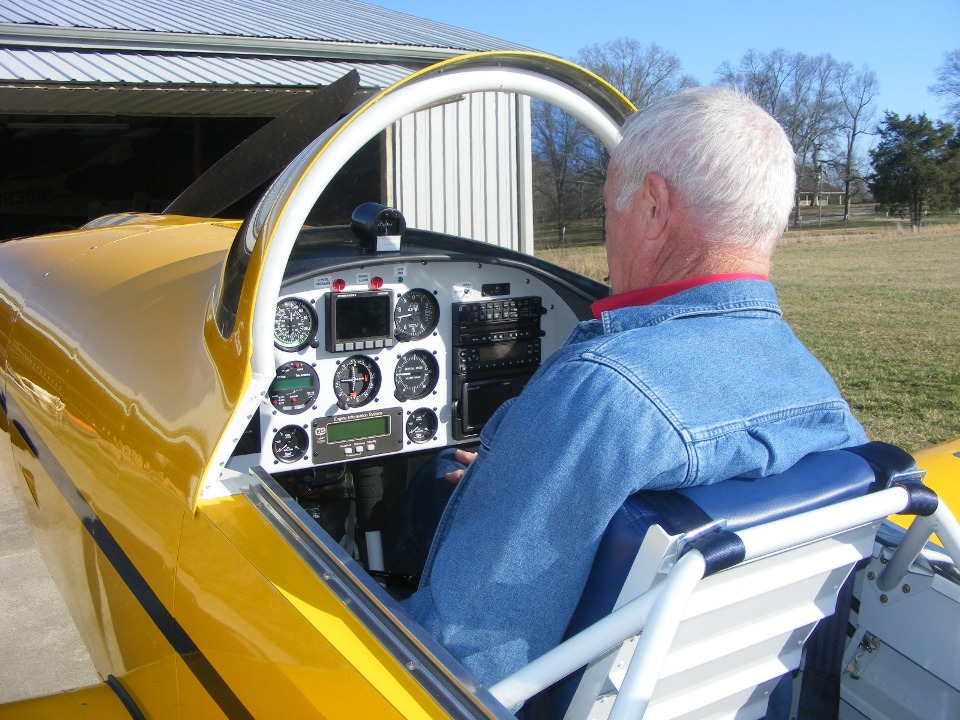 Wendell also started talking about a possible Oshkosh trip for this summer.   I told him he might want to think about a trip to New Mexico for the LOE RV fly-in.

March 29, 2008:  Wendell finished his 40 hours of phase one testing earlier this week.  He could finally take his wife for a ride in the airplane.  He had finished putting in the rear seat belts and shoulder harness earlier.  He made a short local flight to take some photos of the house of a mutual friend near Ringgold, Georgia.  During this short flight, it was discovered that the rear seat microphone circuit was not working properly.  The passenger could talk on the radio, but not on the intercom.  I went over late on this Saturday afternoon to investigate the problem.

We took out Wendell's Garmin 340 intercom and put it into my airplane and everything worked as it should.  That confirmed a wiring error in Wendell's airplane had to be the problem.  Since it was late in the day, we did not want to take apart the instrument panel to continue the search for the problem today.  It was perplexing to say the least.  I went home to think about it overnight.

March 30, 2008: Sunday morning and I awoke with a clear head and a good idea of what caused the intercom problem.  I went over early after lunch to check out my theory.  With the radio turned off, pushing the rear seat transmit button would enable the passenger microphone over the intercom.  Now, I was realizing the grounding of the push-to-talk wire was also completing the audio circuit to the rear seat microphone.

Wendell came into the hangar not long after I arrived.  We pulled out the instrument panel and I focused on the two pairs of 25-pin DBM mating connectors.  One of them handles the various power and ground connections for the active components and lights on the instrument panel.  The other one is dedicated to the pilot and rear seat headphone, microphone, and joy stick push-to-talk wires.  That second one had to have a couple of wires crossed on the rear seat microphone connections.  We dug out the original plug wiring diagram I created during the initial installation.  The plug connected to the panel had all the wires in the correct pin locations.  When I examined the wires to the plug in the airplane wiring harness, three of the wires were indeed misplaced.  All of them on the rear seat microphone connections.  The microphone jacks are wired to accept a push-to-talk microphone.  That extra wire is why it was possible to push the rear seat PTT button and get audio from the microphone.   I moved all three wires to the correct locations on the 25-pin connector and the intercom worked normally. The radio transmit function also performed as it should.   Mission accomplished.

Wendell was very satisfied that all was right with the world.  There is still one minor thing to be addressed.  A wooden wedge trim block is still taped to the underside of the right aileron to resolve a heavy left wing on the airplane.   That will be resolved after Wendell returns from Sun-n-Fun in Lakeland, Florida.   He wants to meet some other RV-8 pilots and get some insight into the squeezing of the aileron on its trailing edge as a permanent fix to the aileron trim issue.