August 26, 2006:  Since I was away on business last week, there were no updates on Wendell's project.  I stopped by his shop on Saturday night and took the next two photos.  We brought out the electric fuel pump and I reviewed the plans to indicate where the pump is to be installed. 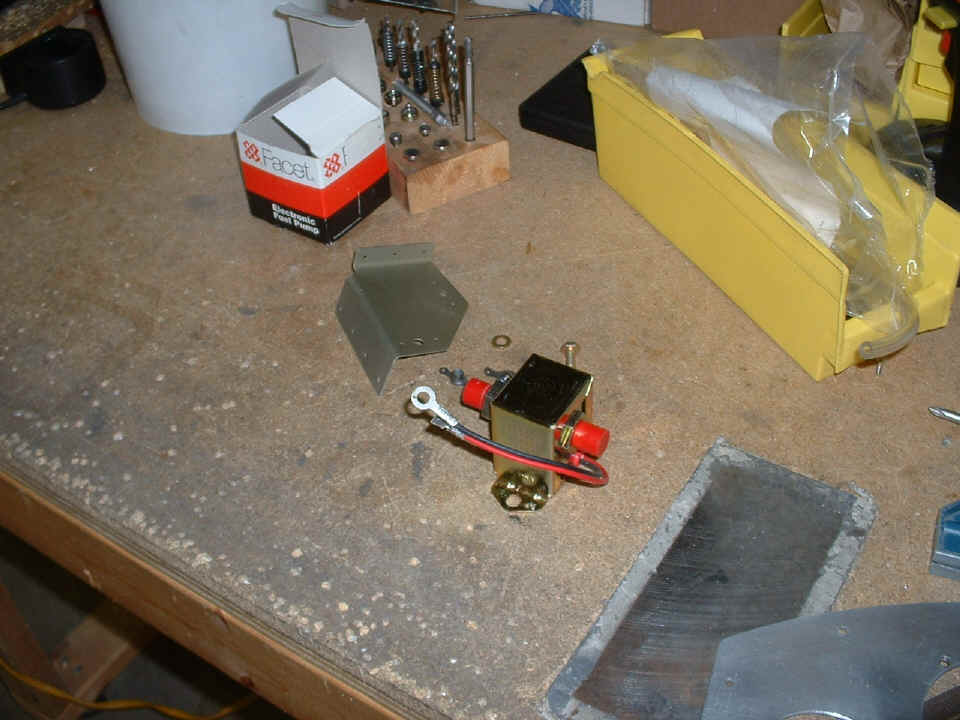 The starter solenoid and the brake fluid reservoir have been added to the firewall. 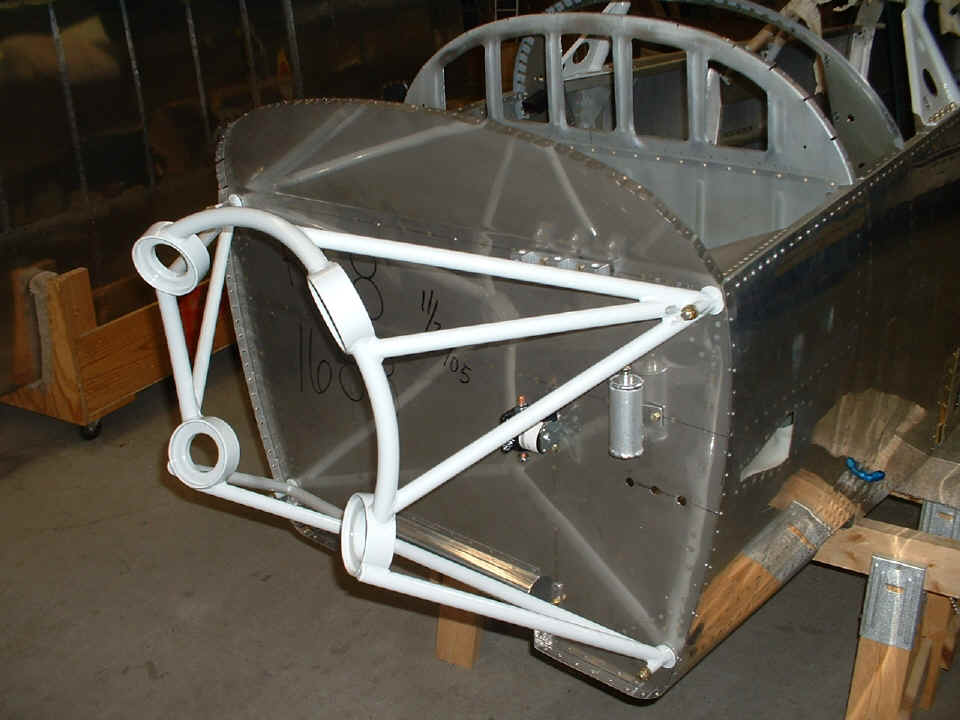 August 28, 2006:  When I went by the shop Monday evening, Wendell and I got out the wiring harness and cut it apart to check the length of critical wires for landing lights, etc.  The more I looked at it, the more it seemed the wiring harness was cut for an RV-6 with its shorter wings.  We figured out the larger wires that will be needed and began making a list of stuff to get from Aircraft Spruce & Specialty soon.  I gave Wendell instructions on the fitting of the pitot tube port on the underside of the wing, and the installation of the aluminum tube that runs inside the wing.

August 29, 2006:  Back in the aft fuselage, the static air ports and air lines have been installed.  I showed Wendell how to fabricate the aluminum tabs that will secure the plastic tubing to the side wall at the longeron.  I also drilled out two rivets to allow those tabs to be mounted via back-riveting from inside the fuselage.  The holes and plastic bushings for wires to the tail light and strobe assembly were added near the bottom of the last bulkhead visible here. 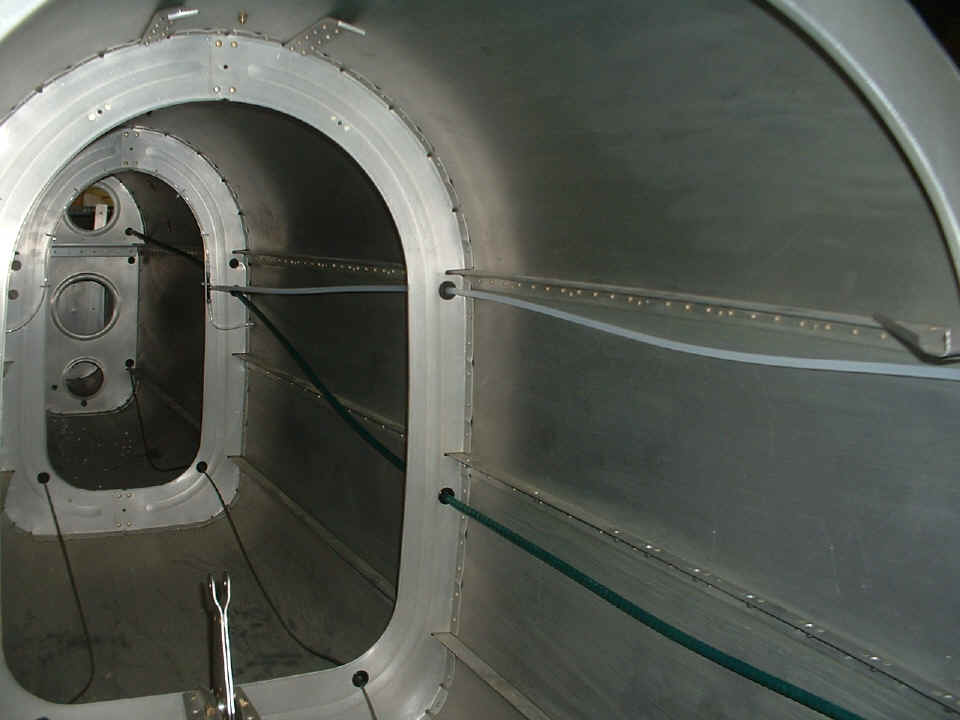 The other assignment from our previous meeting was to install the pitot tube fitting on the left wing and the aluminum tube inside the wing. 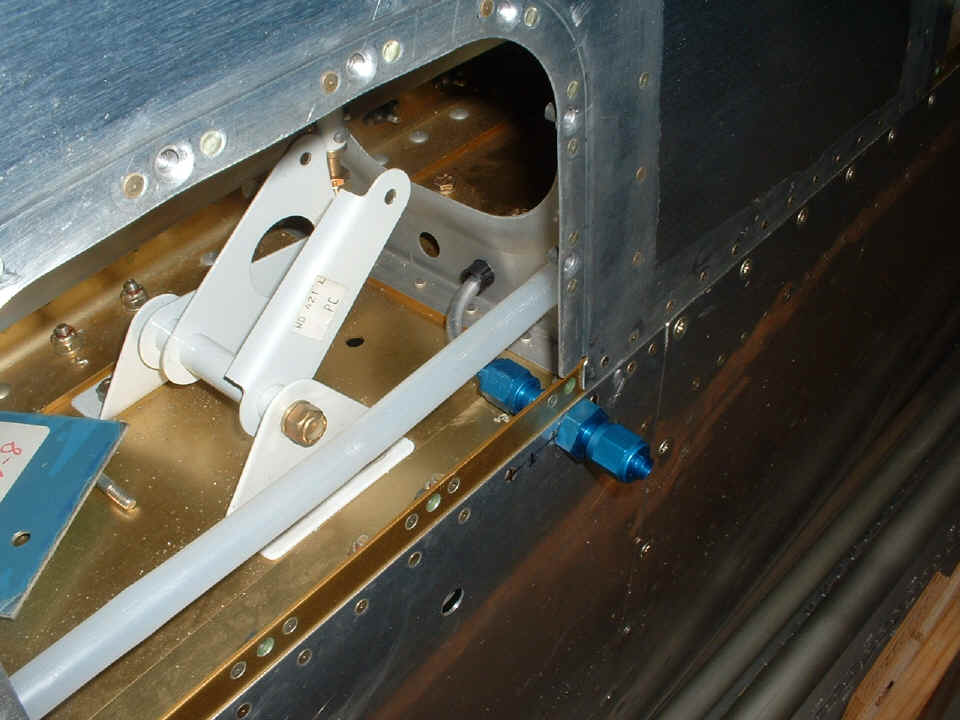 The remainder of the Tuesday evening session was spent checking the routing of the large battery cable that will come to the starter solenoid, and the installation of the fuel tank vent lines inside the landing gear towers.  Wendell had mounted the electric fuel pump, but I did not take a photo.  The routing of the fuel line from the fuel tank selector valve to the fuel pump and then to the gascolator was also scrutinized for clearance from the large power cable going to the starter solenoid.   We also looked at the path of the aluminum tubing for the brake lines to the landing gear.  That was when we realized the airplane will need to be turned over again soon to drill the holes needed to install some right-angle AN-fittings for the brake lines.  Things will get interesting in the days ahead.

September 2, 2006:  Here are three photos from the Saturday session I spent with Wendell.  The gear legs went back on for what should be the last time.  We needed to get them installed before drilling the holes for the brake line fittings in the bottom floor adjacent to the gear legs. 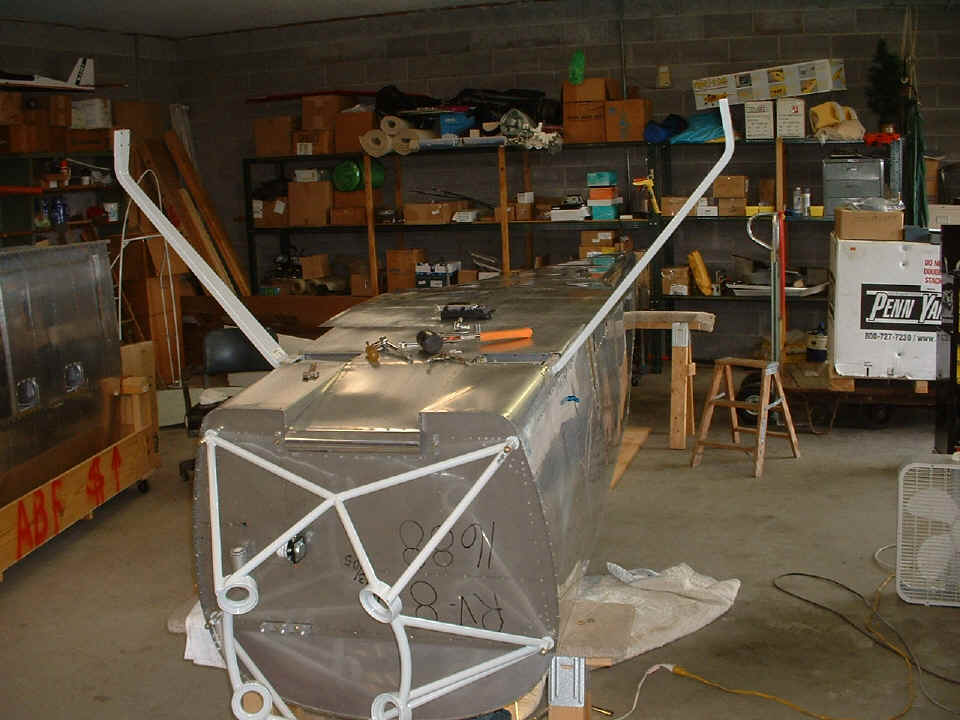 With the fuselage on its side, Wendell discovered all the metal filings hiding in tight places.  The remainder of the static air line is "stored" for now until we get the instrument panel in place.  I reviewed the large drawings with Wendell showing the routing of the fuel vent lines to be installed in the gear leg towers on both sides of the fuselage. 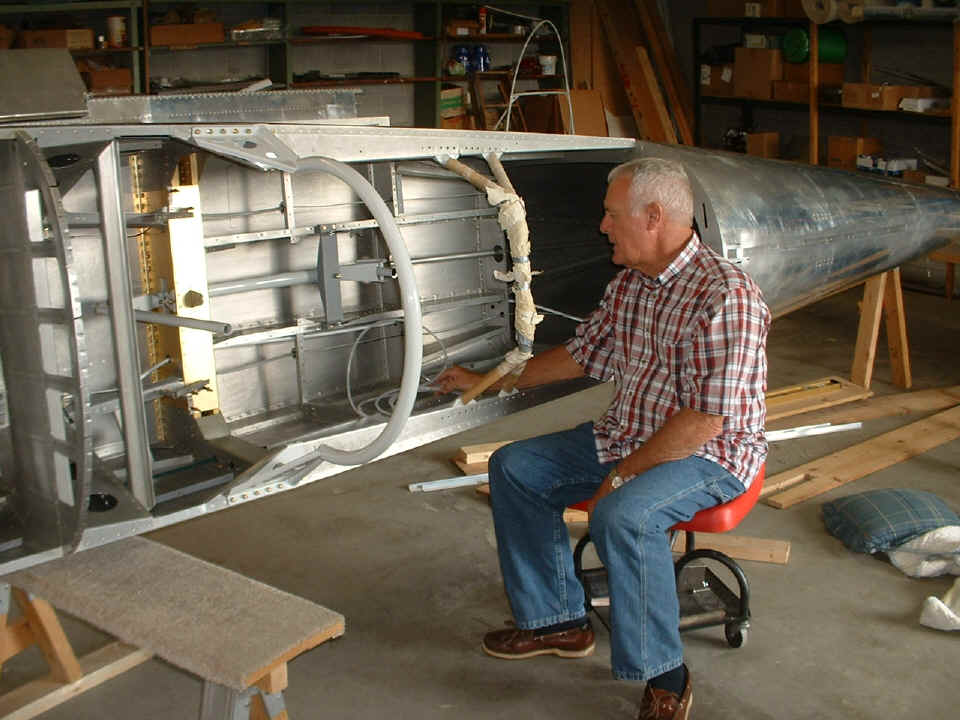 The gear legs touch the floor to keep the fuselage from rolling any further to either side. 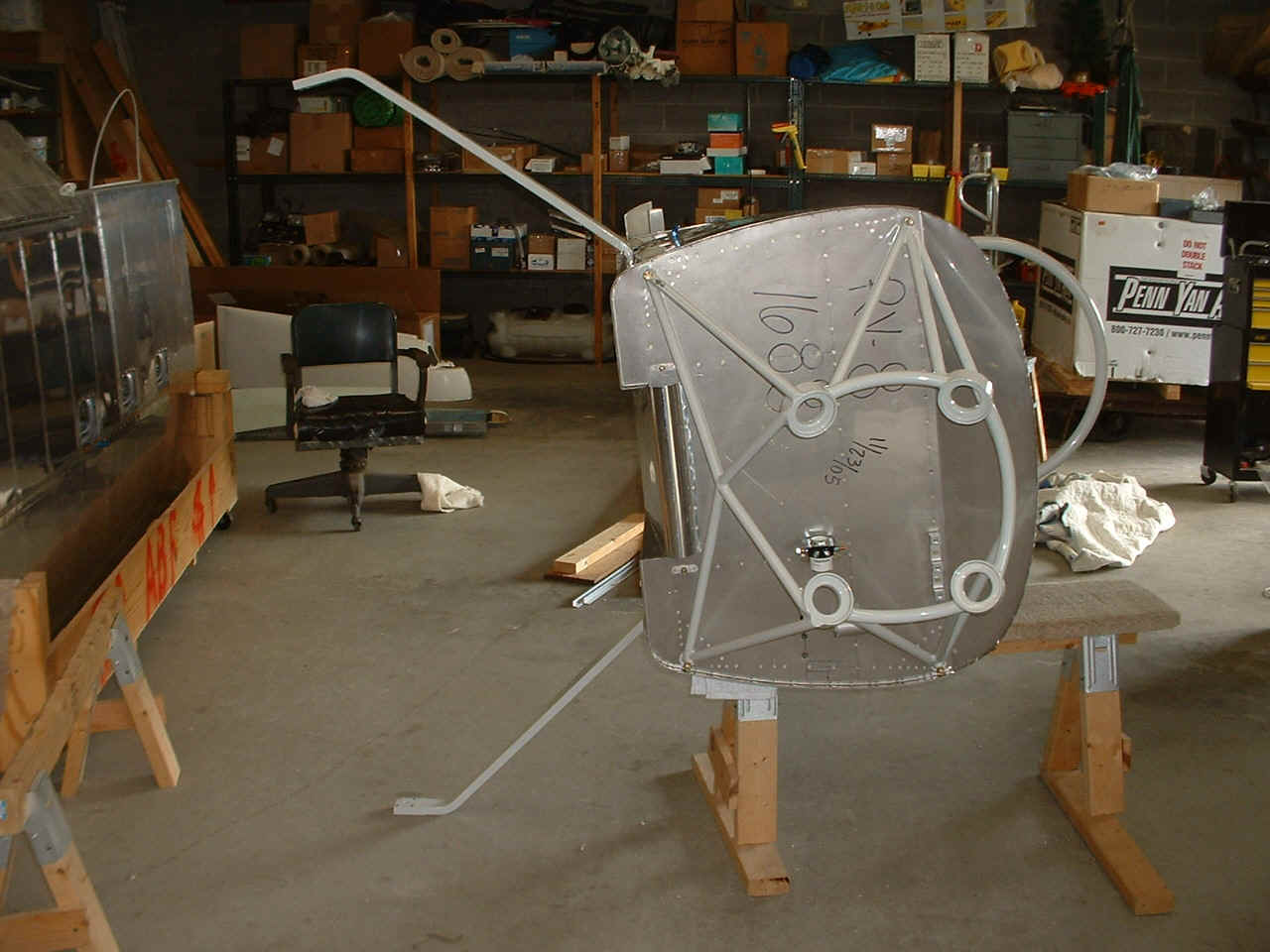 September 4, 2006:  Labor Day holiday in the USA.  Here is the only photo taken today showing Wendell installing the last two Ansel clamps on the fuel vent line inside the right side gear leg tower.  Look carefully and you will see the vent line 1/4" tubing through two of the access holes near Wendell's right hand. 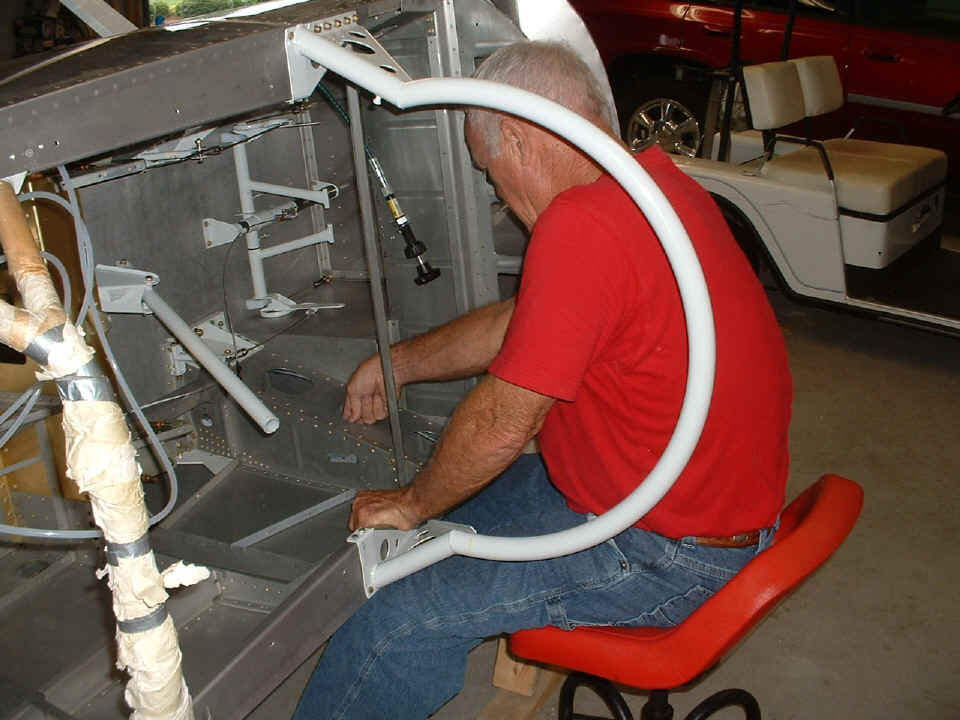