August 23, 2018:  I start this with some fear and curiosity.  This will be the first time to publish from Front Page 2000 using FTP.  This is the only new page to publish today.  It appears I will have to use file transfer protocol (FTP) to update the new web pages ONE at a time

The new web servers no longer support Front Page extensions.  I can still create my web pages using FP-2000, but I have to load them up manually, so far.  I may discover the answer soon.  It appears FP-2000 wants to upload all of my pages again.  I not ready to do that, yet.

August 24, 2018:  I just did an experiment by downloading a "copy" of my web site from the new servers.  I discovered the "hidden" sections not linked to my home page directly or indirectly were ignored by the import command in Front Page 2000.  All the files downloaded were given today's date.  The files on the web server still have the original date when they were published.

August 25, 2018:  It is another hot and steamy Saturday in Florida, and not good for flying.  When I was at the airport this morning, the nearby clouds were low with some light rain showers. The rumble of thunder was enough to convince me not to open the hangar doors.  If I would have gone flying, I would have needed to move the gyrocopter.  I checked on my battery trickle charger to confirm the GREEN LED of a fully-charged battery in the airplane.  I stopped by the hanger of an aerobatic pilot and found him working on a Continental engine from a yellow Piper Cub seen here in the background at the right side of the photo.  Here are a few photos from his hangar.  The airplane in the front is a 1948 Cessna 140 also with a similar Continental engine. 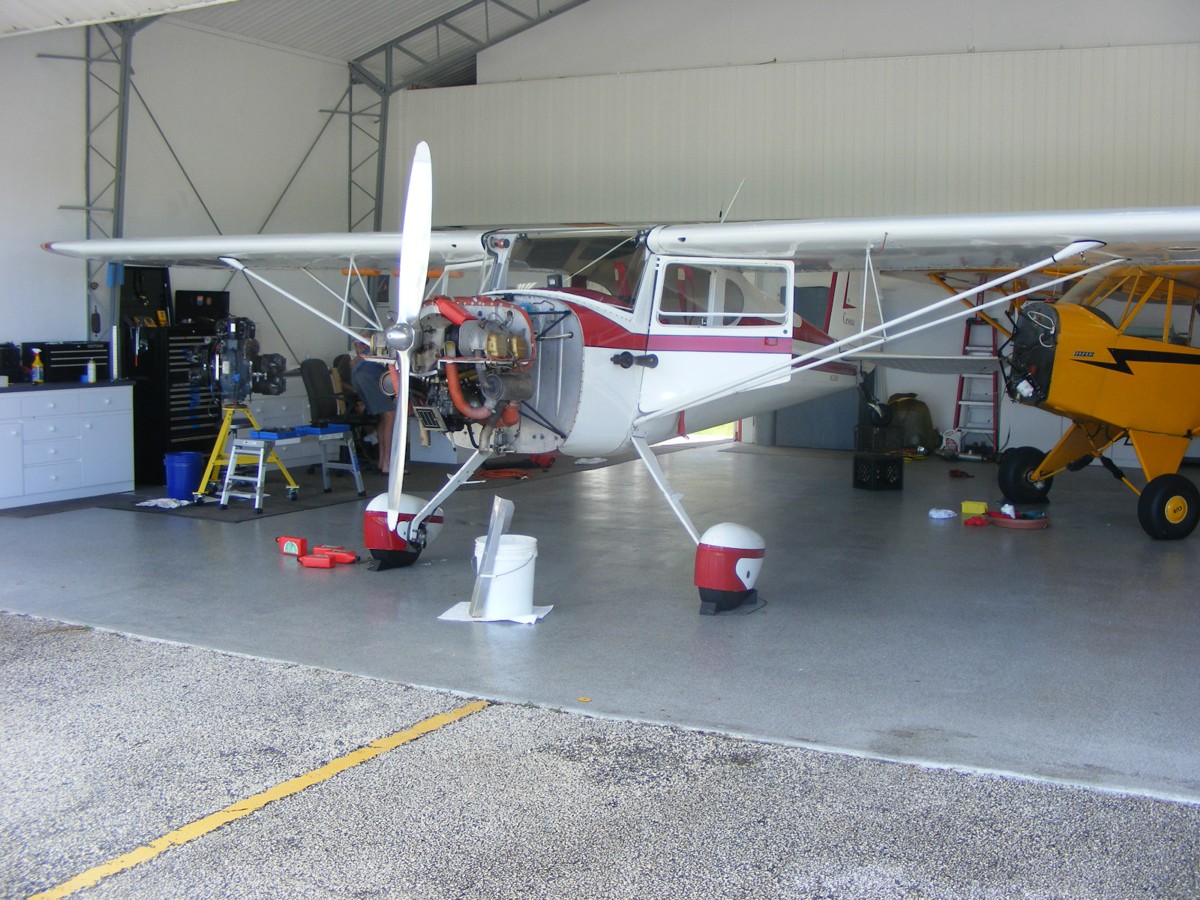 Here is a closer view of the engine from the yellow Piper J-3 Cub at the start of an overhaul. 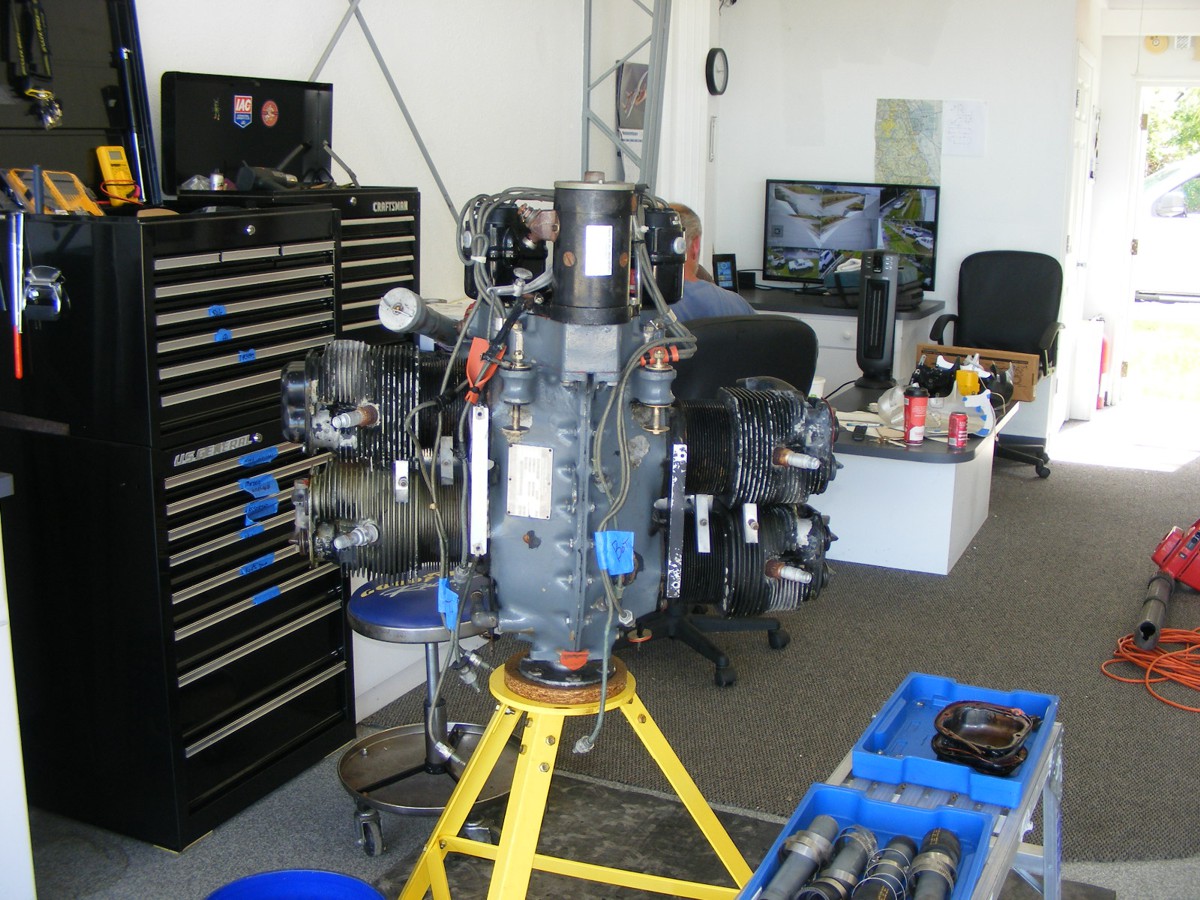 Here is the business end of the old Cessna 140 tail dragger. 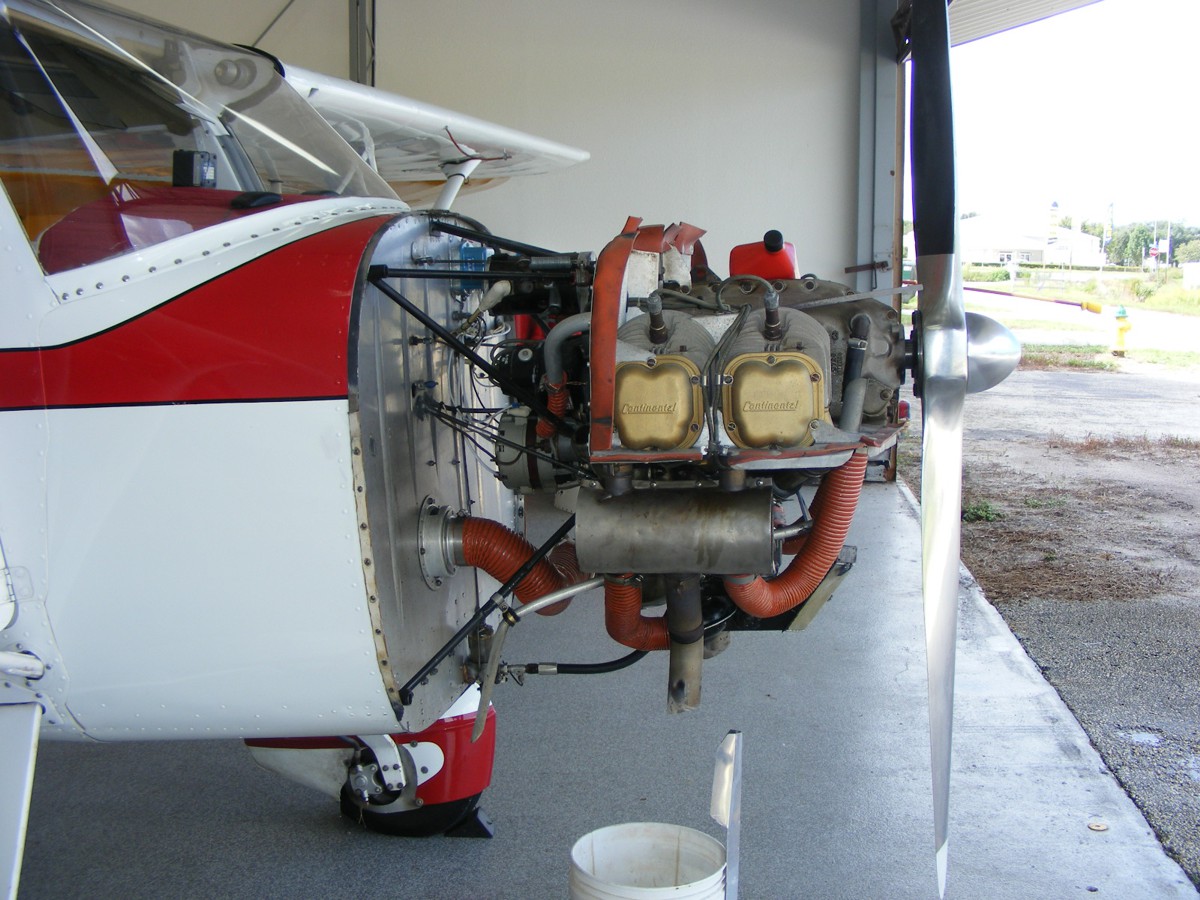 September 1, 2018:  The sound of distant thunder and light rain roused me from sleep at 6:30 AM on this Saturday morning.  I checked the weather radar along with my favorite online news sources before breakfast.  I finally opened the garage door and saw a rain shower filtering down through the oak trees on the East side of the house.  The gutter down spouts were flowing freely on the north side of the house where gutter covers keep the leaves from clogging the gutters.  Now, just a few minutes later, the sun has pierced the local cloud cover to light up my office window.  The current Weather Channel online radar shows a clearing area coming in from the nearby Atlantic Ocean.  The thing most people living in Florida agree upon is the weather and how quickly it can change.

September 1, 2018:  The Weather was good enough to get in another photo flight of the new housing project near my home and a quick touch-and-go down at the Valkaria Airport. 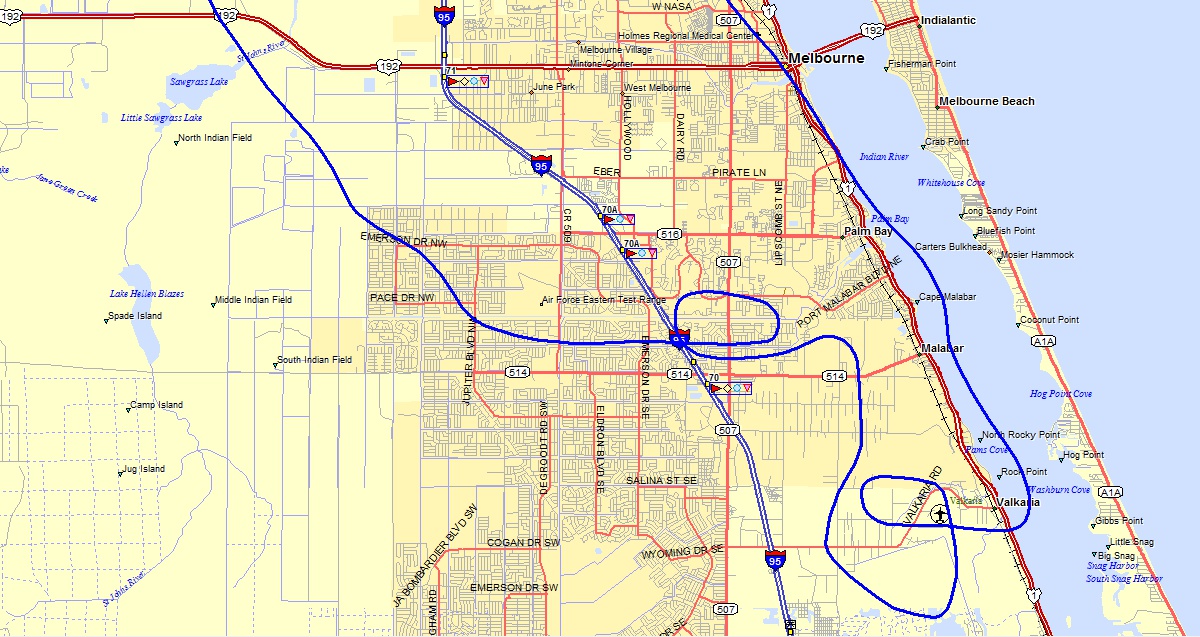 The flight was below the clouds and out west of the Class D air space for the Melbourne Airport.  That is US 192 crossing the Saint Johns River before turning due EAST for town and to the Atlantic Ocean coastal highway, Florida route A1A at the beach. 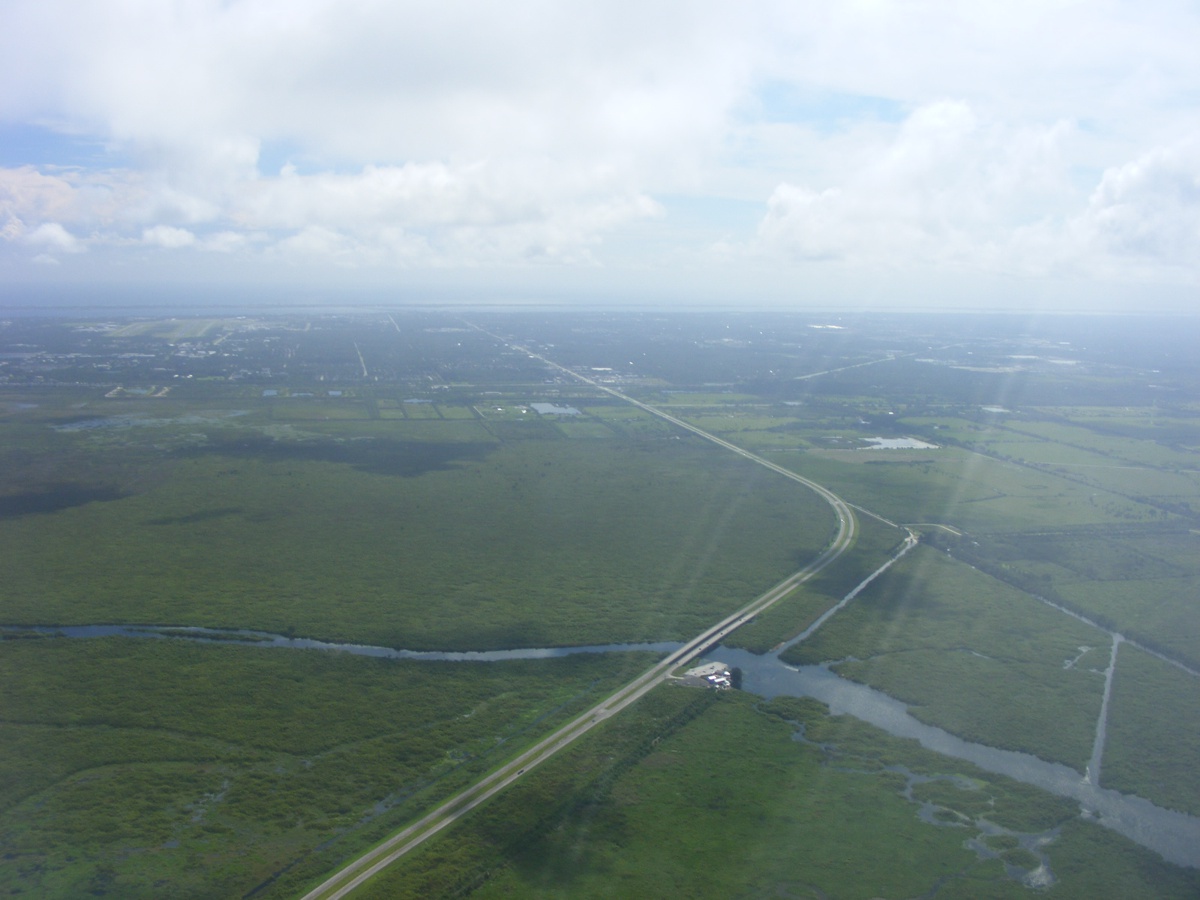 This second image today was taken immediately after the one above with the camera looking south at the man-made canals that drain the farm lands south of here.  There is virtually nothing left of the natural course of the headwaters of the Saint Johns River. 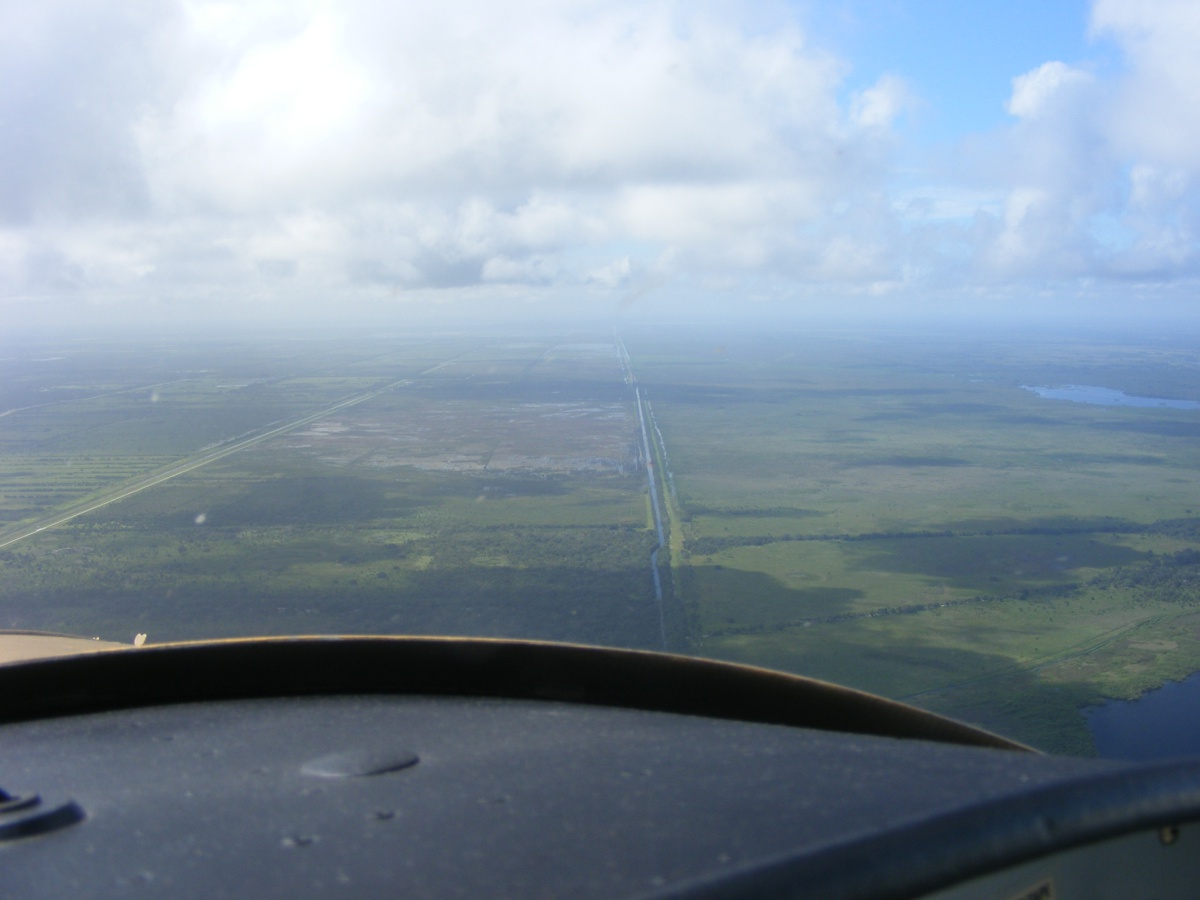 The US Air Force has this facility that occupies an old airport on a one-mile square property that developers would like to have for new homes.  It is gated and fenced the same as many military facilities.  There are no flight restrictions in this area on the navigation charts. 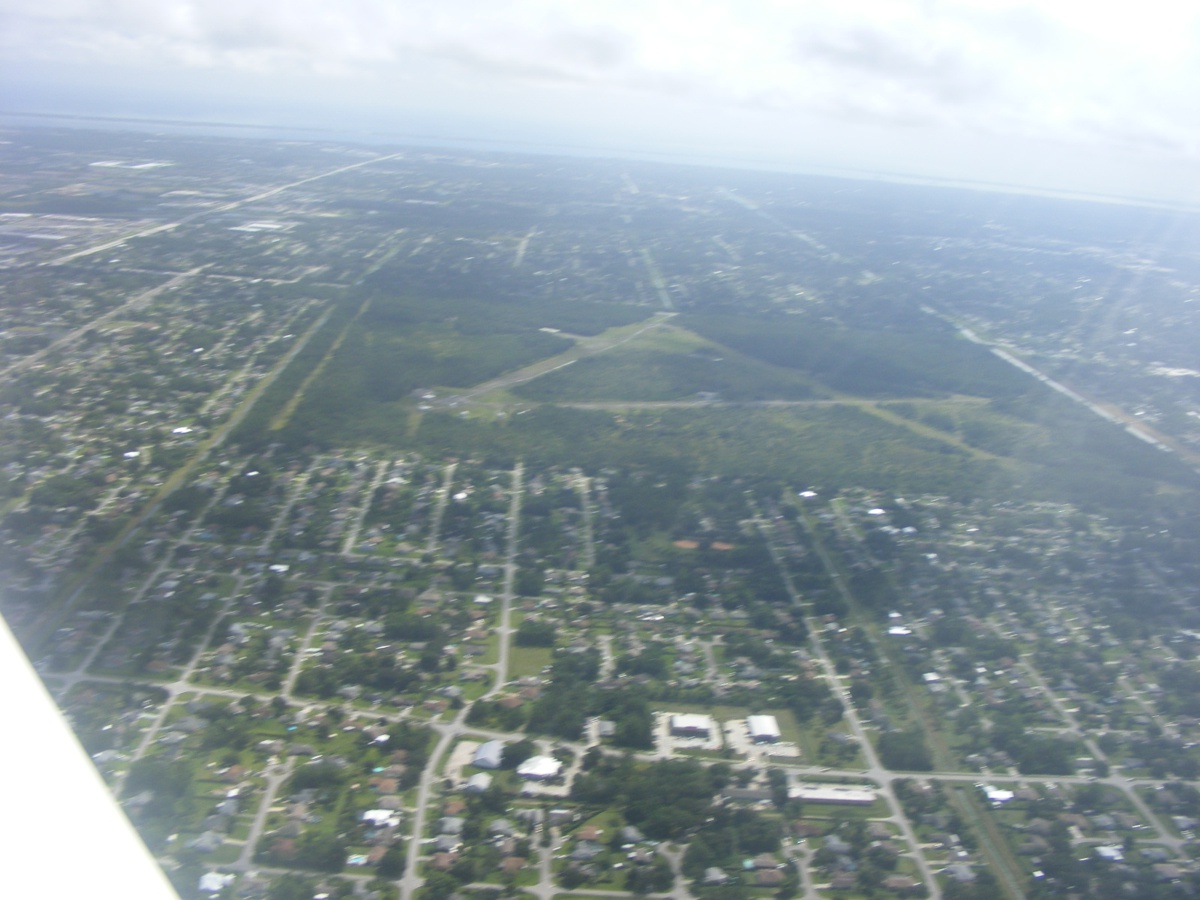 This second photo shows the Tillman Canal at the south side of the base with a view looking EAST. 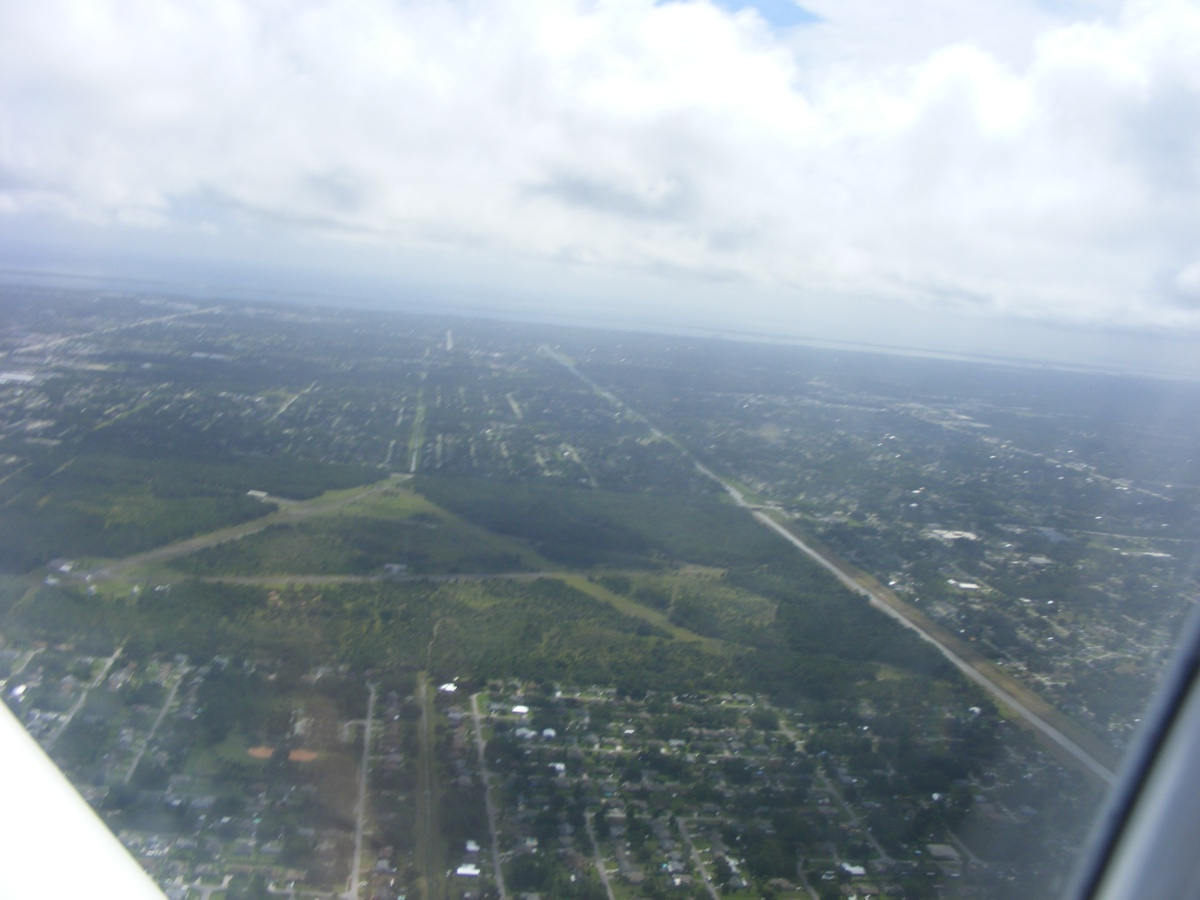 I am getting lined up with the canal as it passes just south of my home and the housing development that is replacing the golf course that was just north of the house. 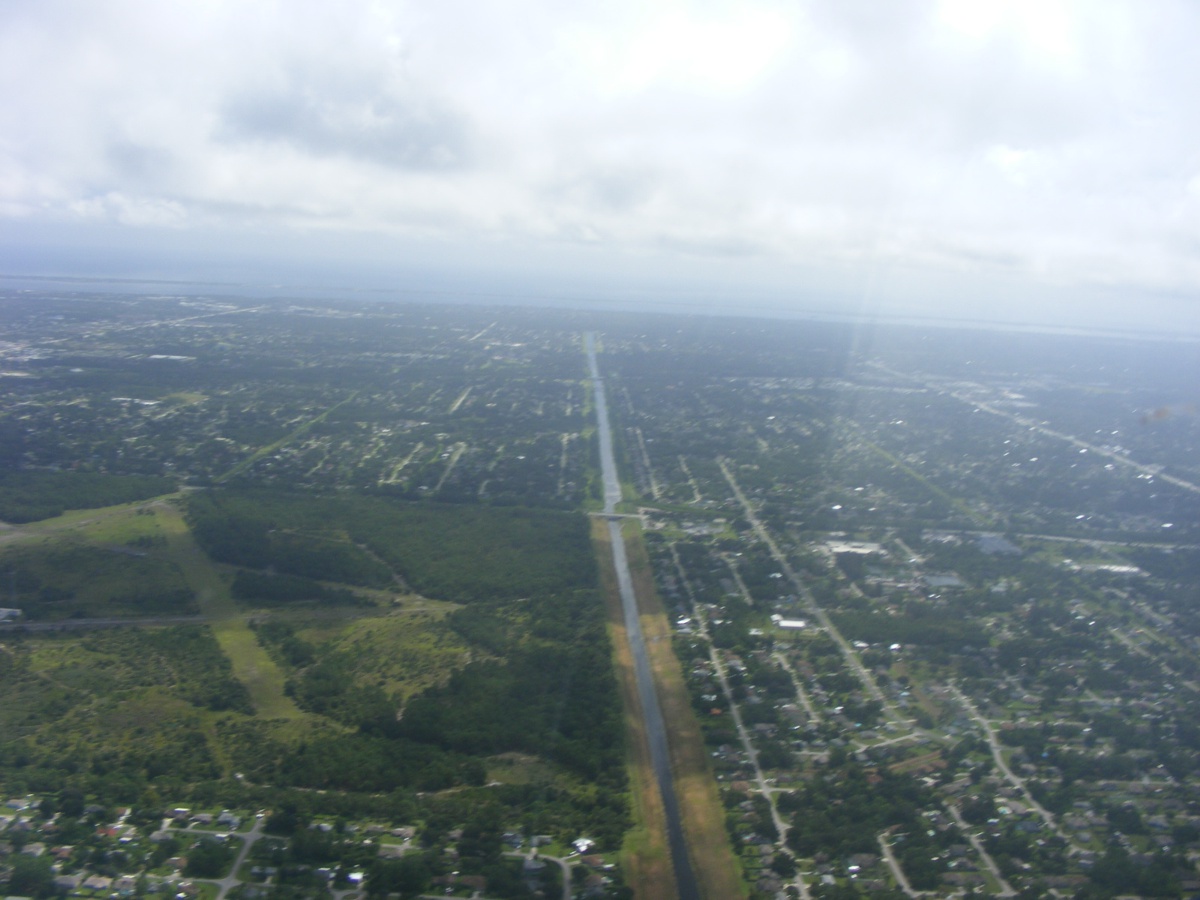 I-95 crosses the Tillman Canal at the bottom of this photo looking northeast toward the Indian River Lagoon and the Atlantic Ocean. 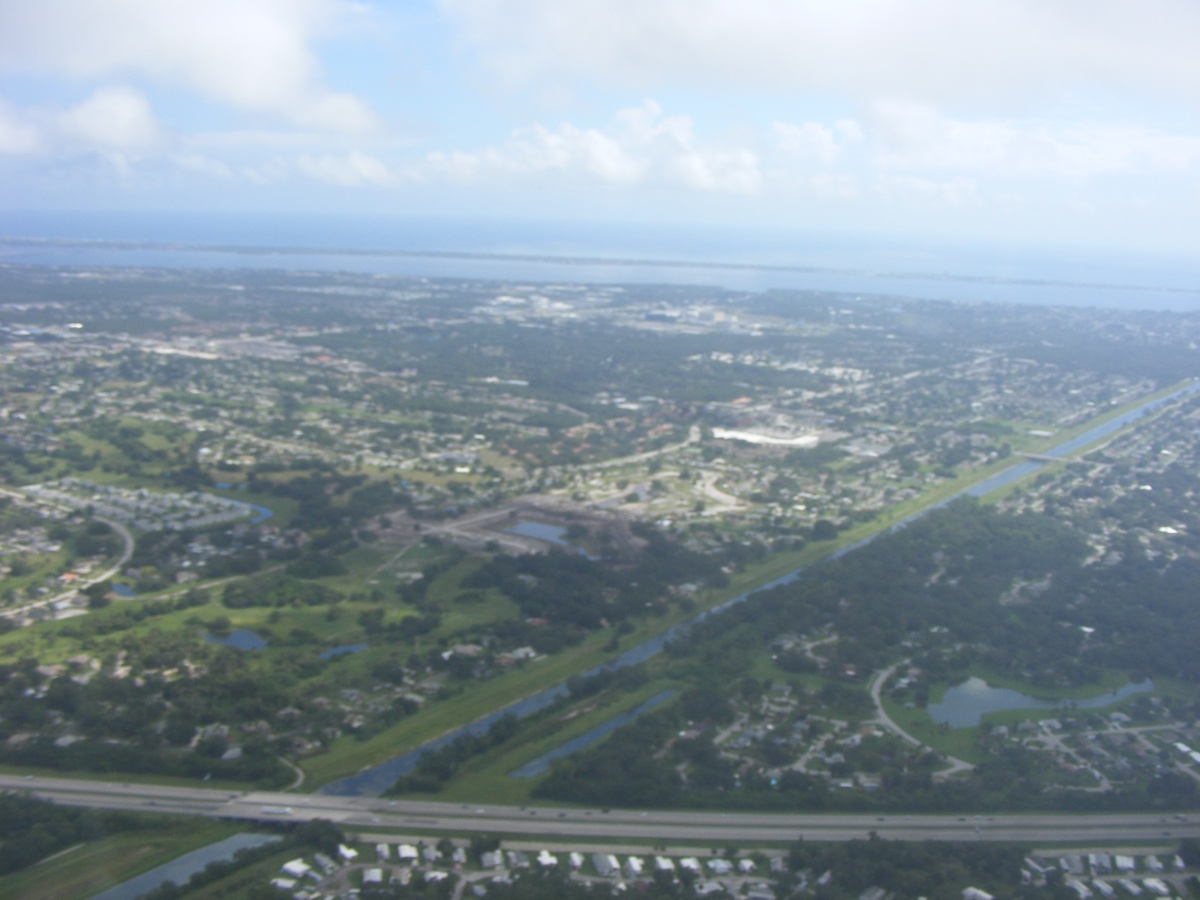 Here is the golf course being transformed into a housing development. 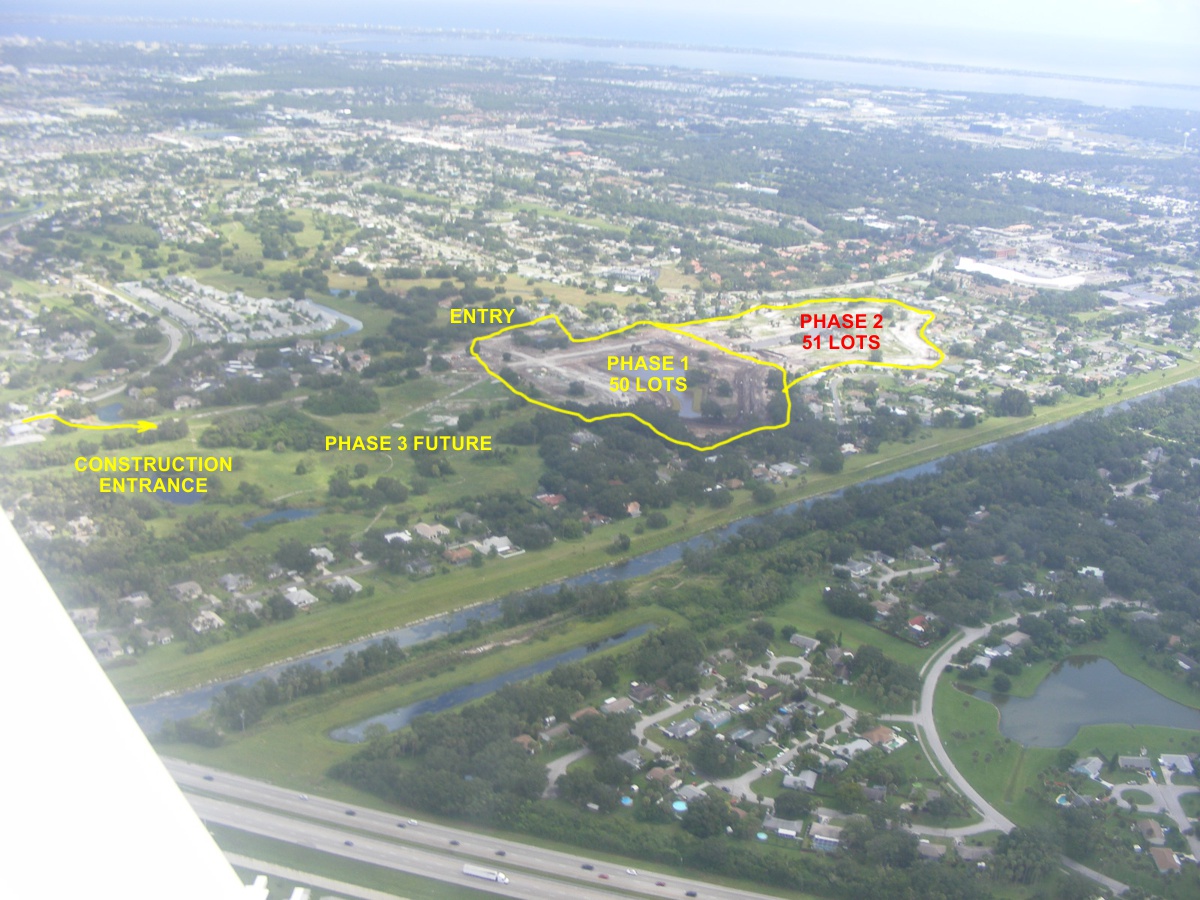 This is the flyby heading west on the north side of the development. 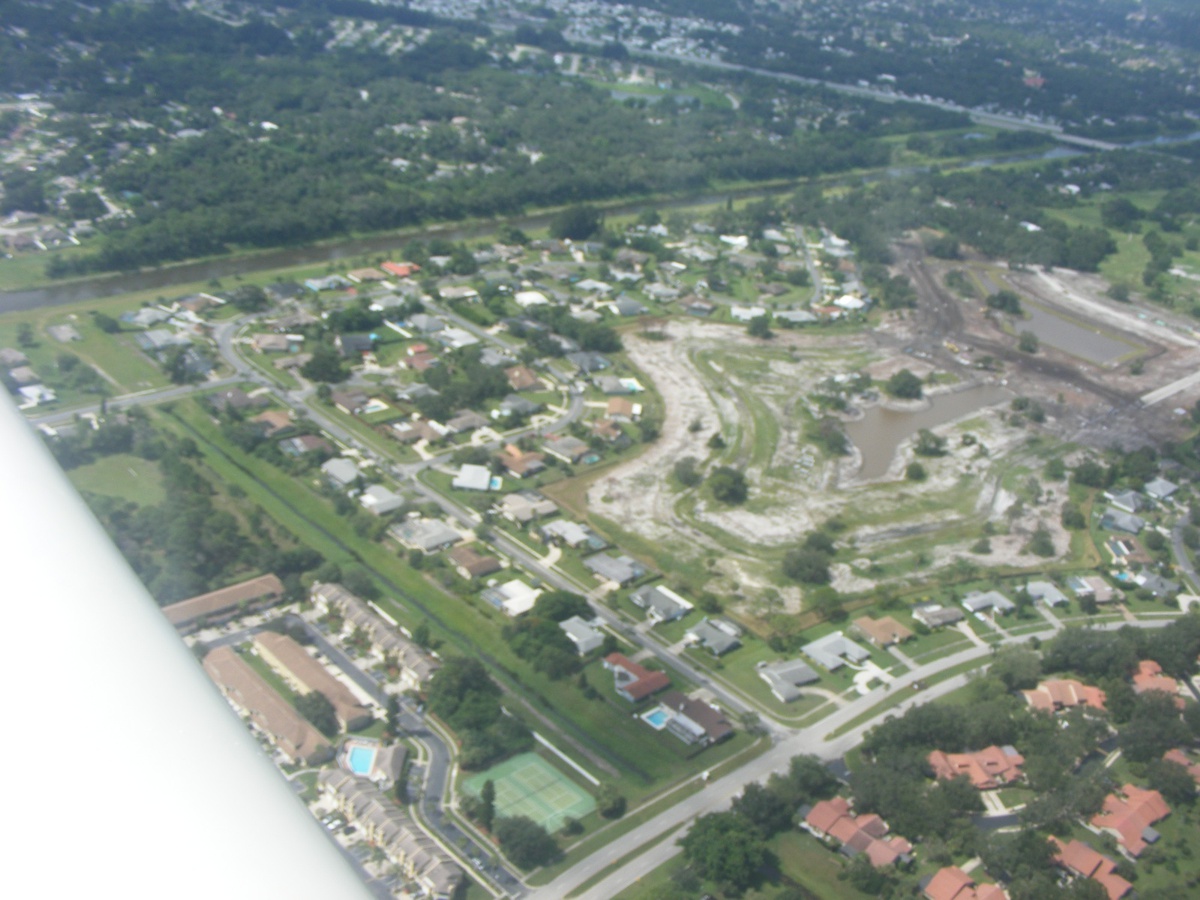 The water retention pond near the center of this photo has just had grass sod laid down on the shore line this past week.  This is the first time I have seen they have been putting in curbs for the main street from the traffic circle at the entry to the development. 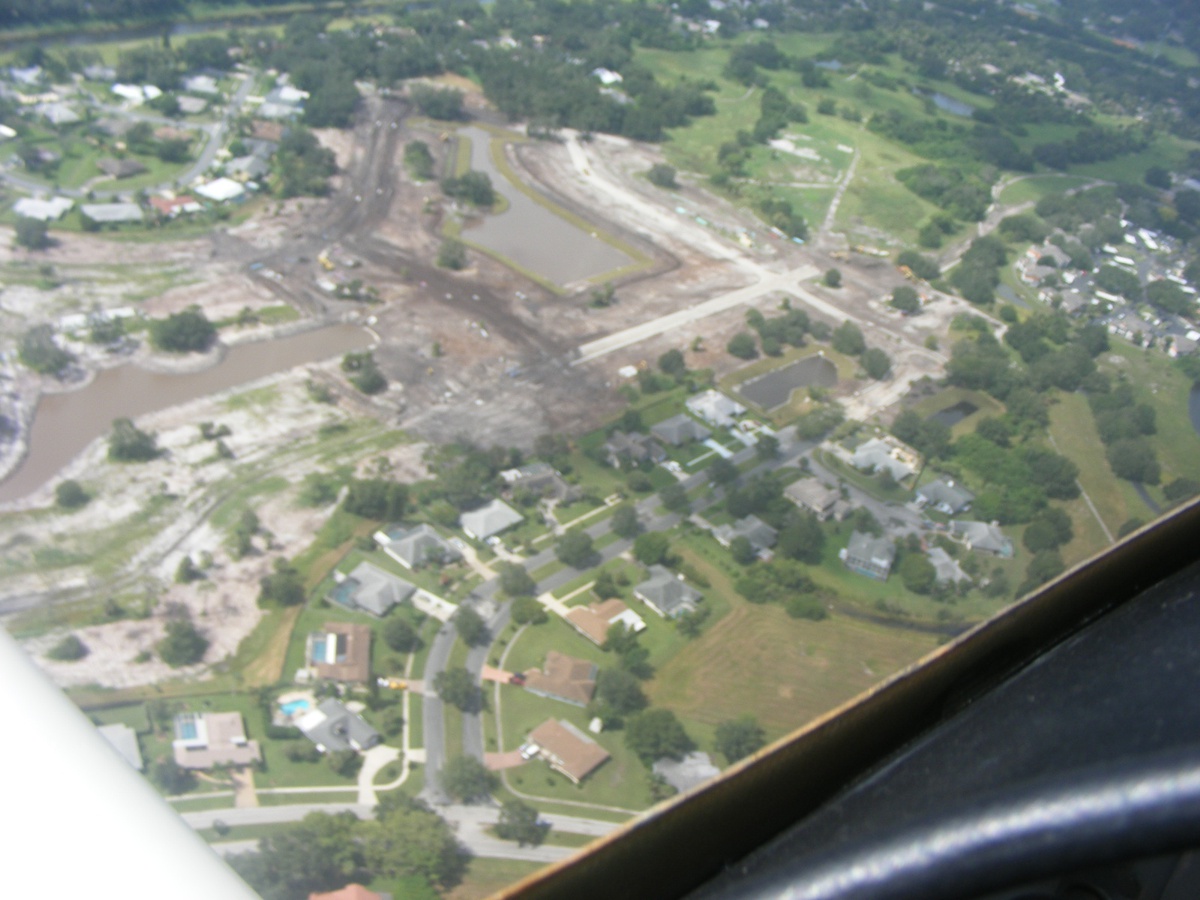 After the landing at Valkaria, I started my climb to get above the Melbourne Airport Class D air space and the Patrick Air Force Base on the barrier island.  The clouds here are about 2,000 feet above the ground. 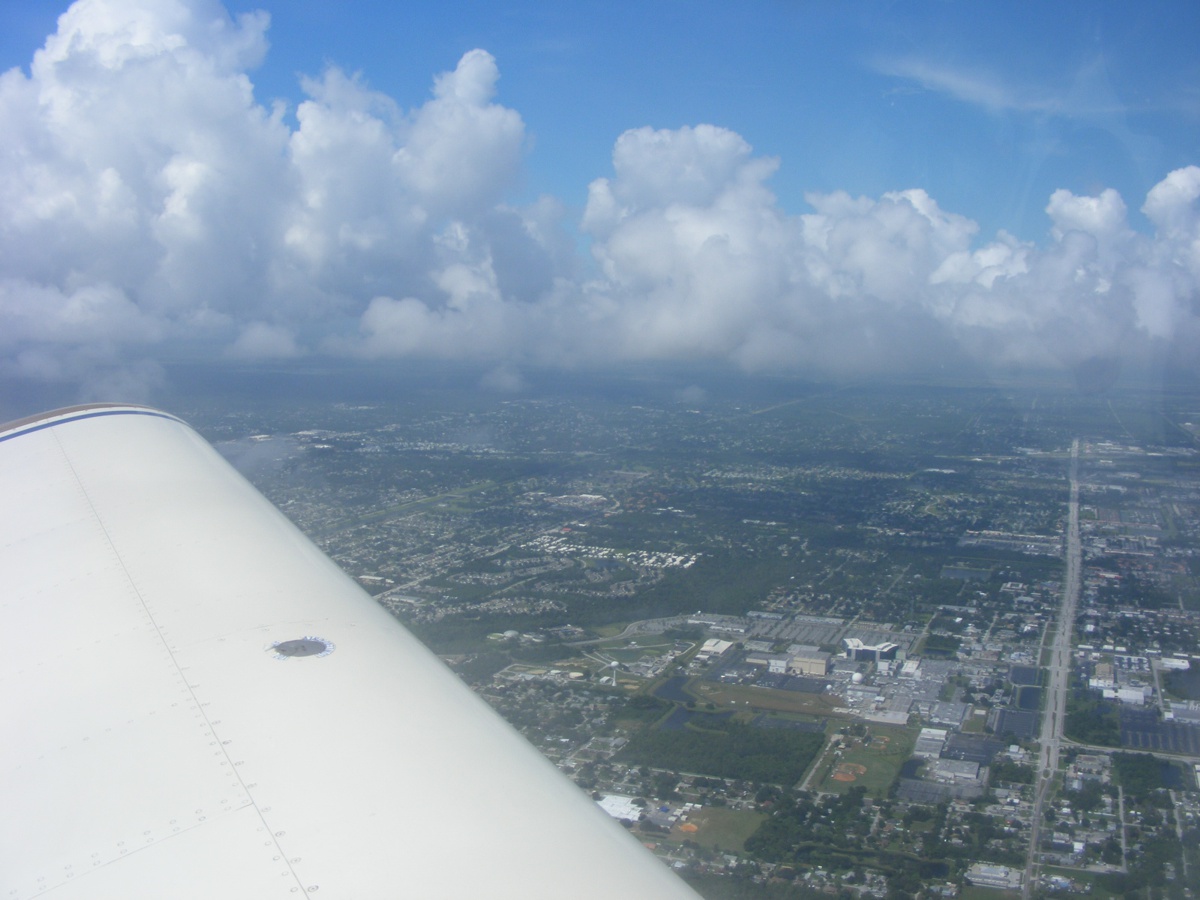 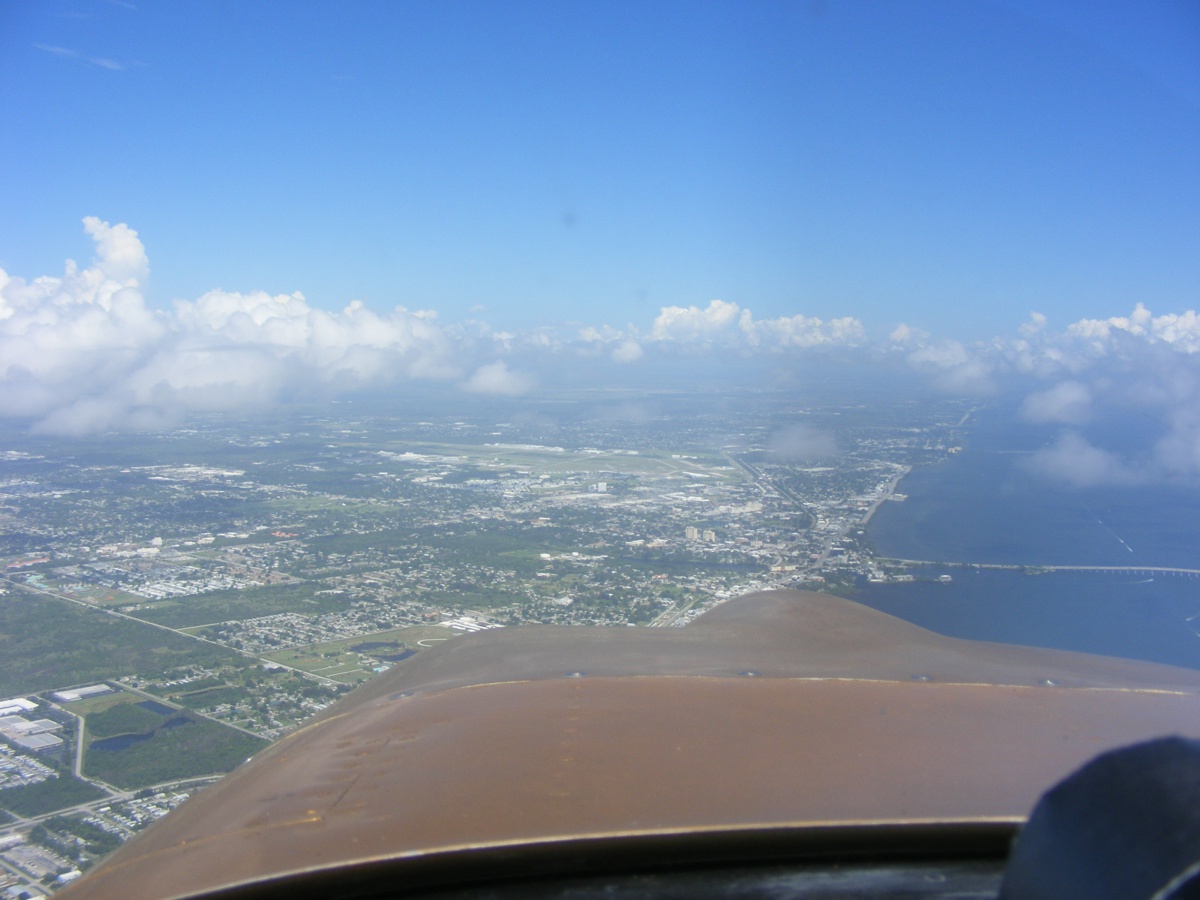 My Dynon D-10A gets serial data from my GPS and computes the winds aloft displayed with an ARROW and the value of 21 MPH as a quartering tail wind in the lower right quadrant of the display screen. 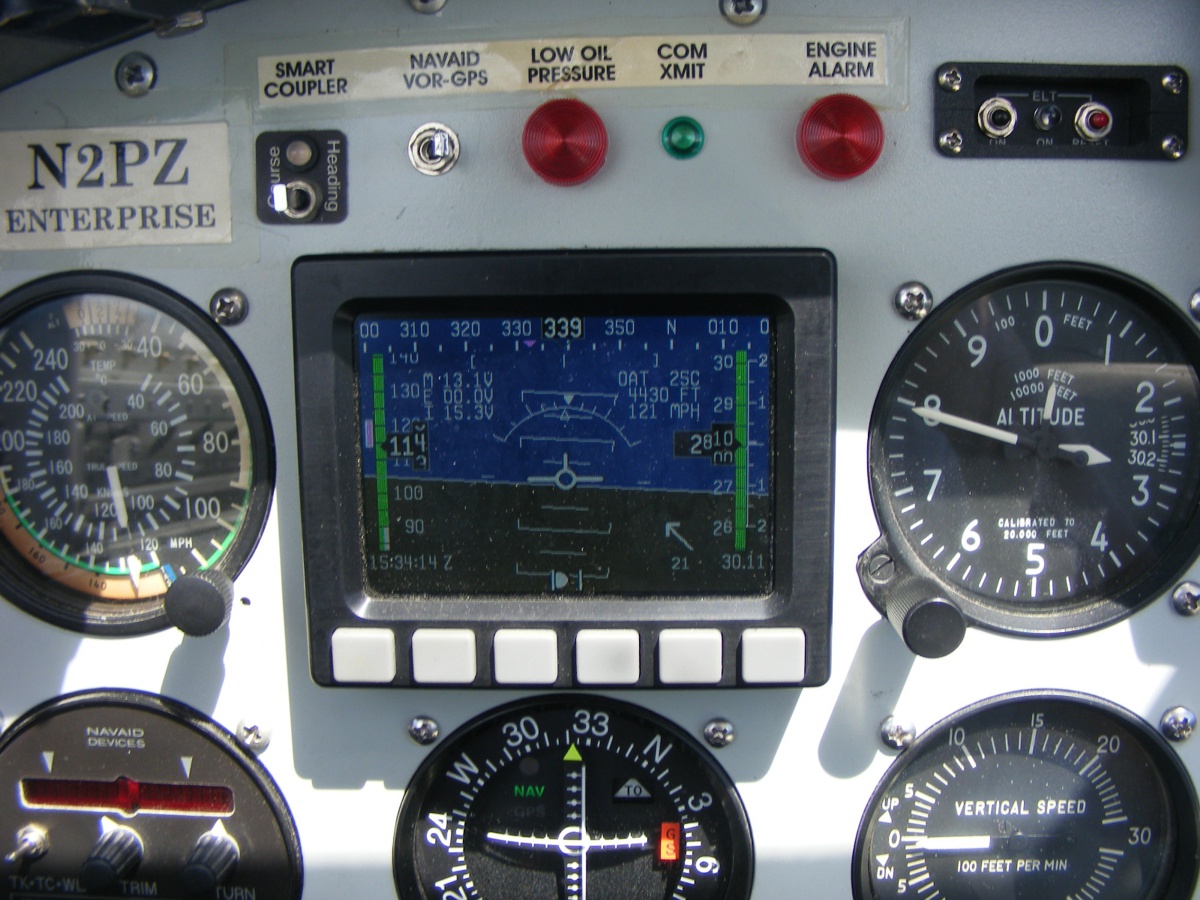 I descended down to 1,500 feet MSL west of the Patrick AFB Class D air space flying along the path of interstate 95 on the way toward the Rockledge airport.  I was watching the winds aloft from the Dynon unit and made a last-minute change to land on runway 36 instead of runway 18 toward the south.  My southbound departure is seen here to the west side of Lake Washington and the Saint Johns River. 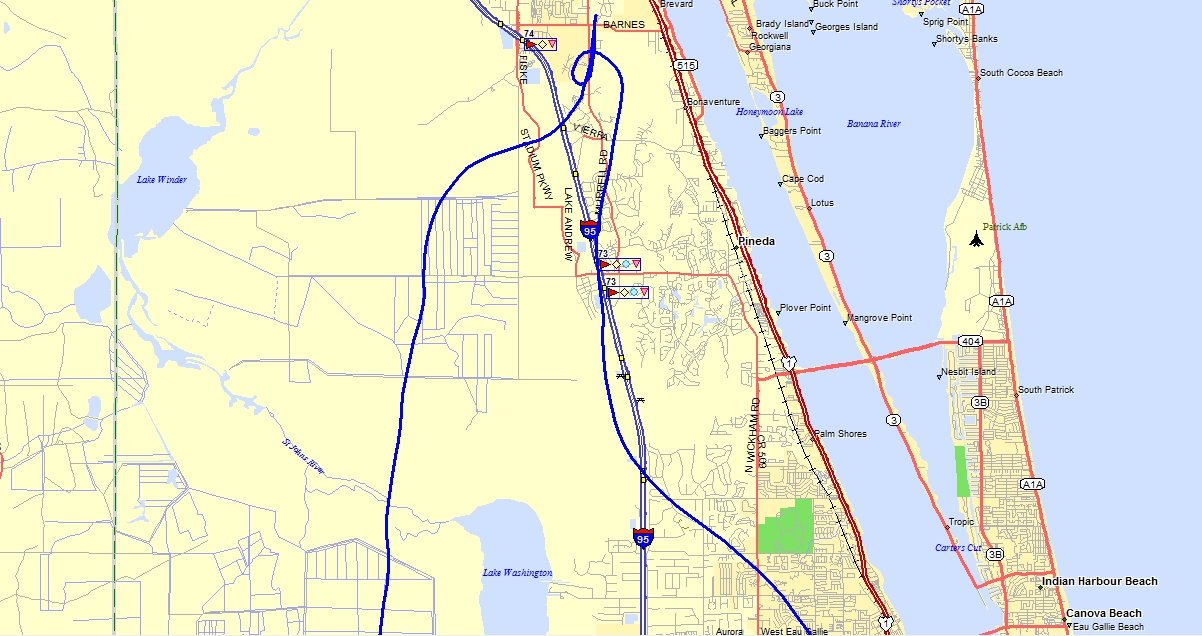 The Hobbs meter added 0.8 hours today and the weather held off after the overnight rains that were pushed off to the northwest.