August 21, 2017:  Eclipse Day has moved past the big event and I now begin the flight south to the Kennesaw Airport (KRYY) to take my son back home.  When I first looked at this image and the reflection of my pillow in the baggage area, I realized I need a BLACK towel or sheet to put back there.  That only took me 12 years to come to that realization.  That will allow these photos behind the left wing to be clear of reflections from inside the airplane. 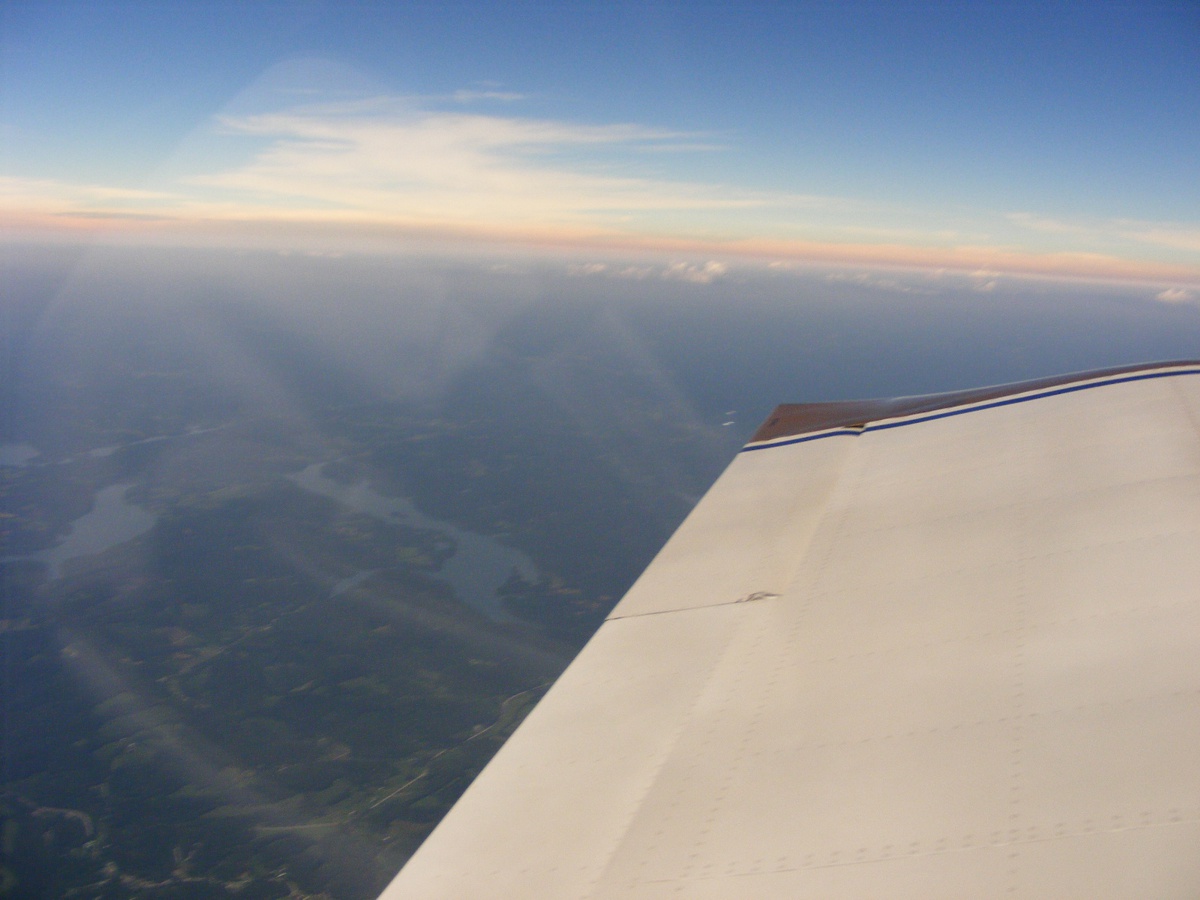 Daylight is back at our location with the time on the GPS showing 2:33 PM Eastern time.  The party is OVER and it is time to go home.  In the past 15 minutes, we were listening to the air-to-air radio frequency used by pilots in flight at 123.45 MHz.  We could hear probably 20 or more airplanes from Hopkinsville, Kentucky toward Bowling Green at various altitudes up to 20,000 feet in different types of aircraft.  One guy mentioned he spent $1,000 for this trip and it he said it was worth it.  As I write this page, I am at home and know that I spent about $250 on this trip.  Fuel was $200 and the Jeppesen aeronautical database update to the Garmin GPS 296 was $49.95 on the day before my flight from Florida.  As the other airplanes headed for home, the 123.45 MHz frequency went silent.  I read an online story of a pilot who flew from California to Oregon to have this same experience.  He had a moving map display that showed the positions of other airplanes doing the same thing.  When the totality ended, he could see the airplane targets scattering in all directions going home. 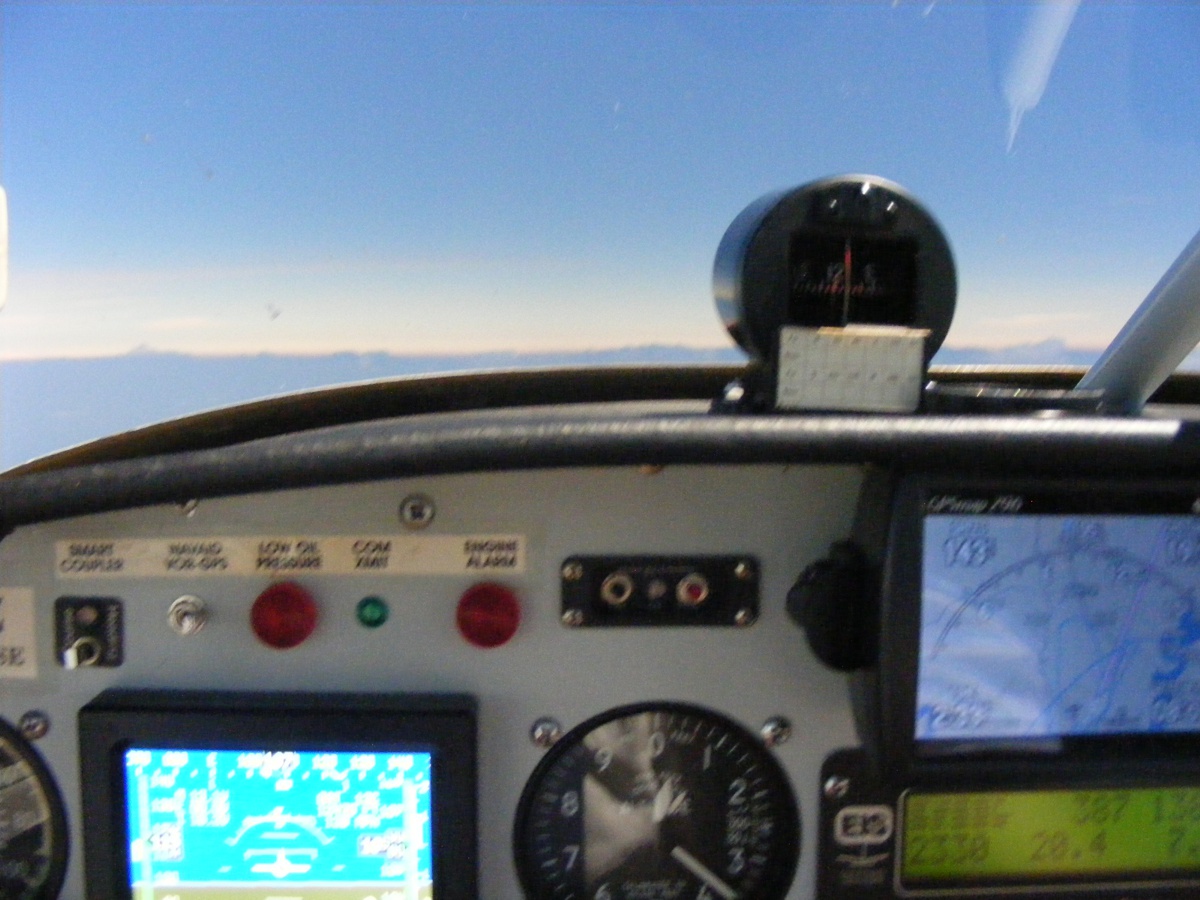 I handed my camera to my son Marshall to take some photos from the right seat.  Can you say BUGS on the windshield?  That one white cloud in the distance is more than 80 miles away to the East of our present location. 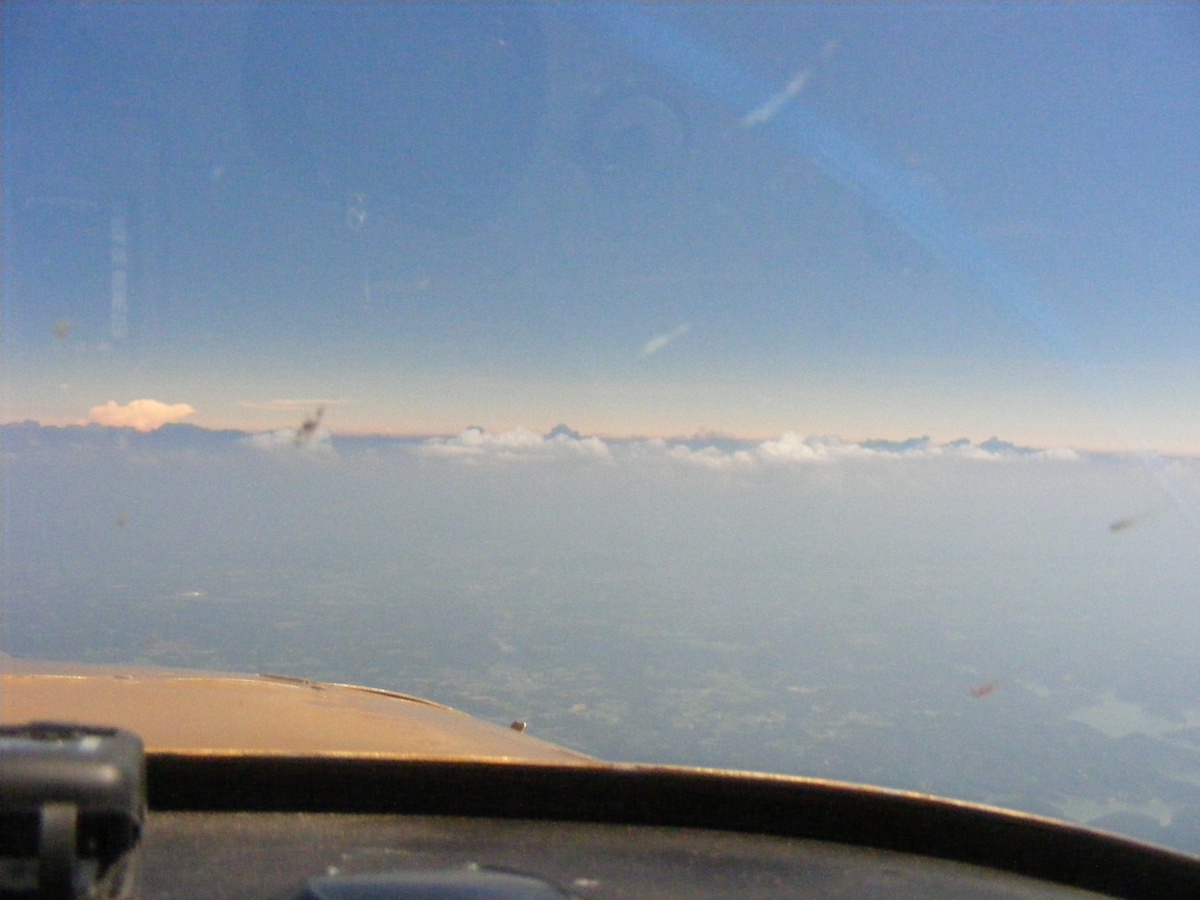 He is using the 10x zoom lens on the camera to look at the last of the moon shadow on the clouds to the East.  The cloud tops closer to us have more sunlight hitting them. 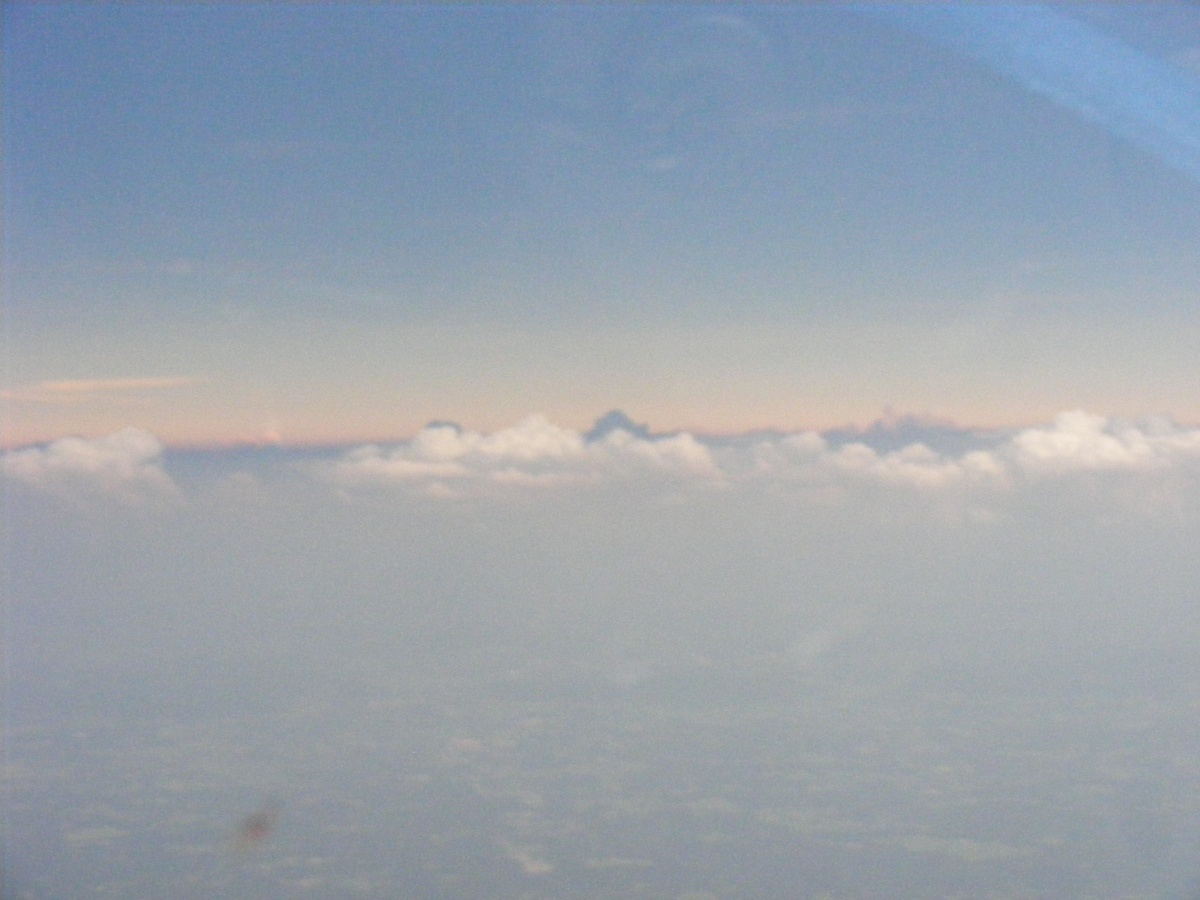 Here is another shot from my seat with the zoom lens pushed out toward the East directly on our course before we head south.  Just one more look at the tallest cloud over there still in the bright sun.  You can also see the patch work of the farm fields down below in the valley. 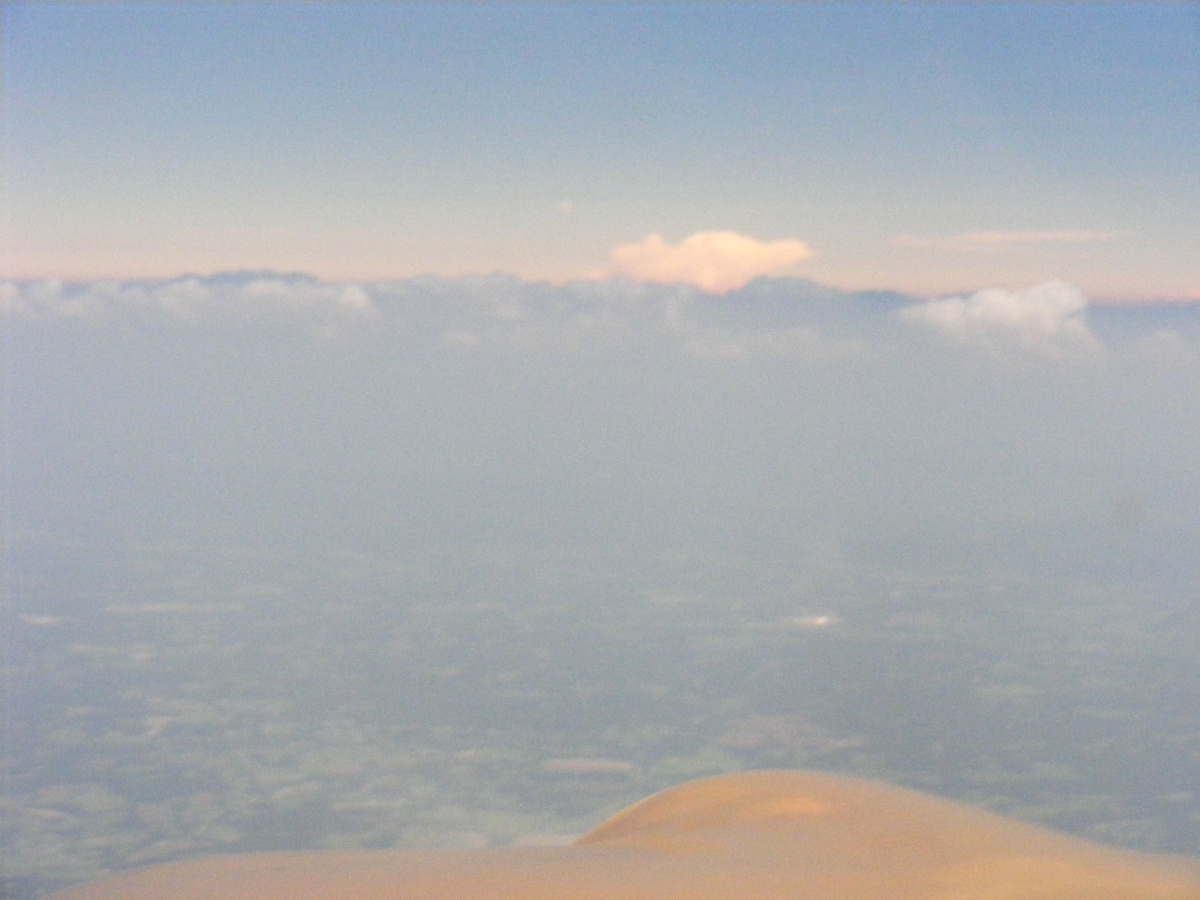 Do you see that tall cloud in the distance is starting to get dimmer?  It has gone from white to a red tint before the Eclipse reaches that location.  CAVU is what the airline pilots call the weather up this high above the clouds.  The acronym letters stand for "Ceiling And Visibility Unlimited" and that is why we were up this high to get above the haze down lower. 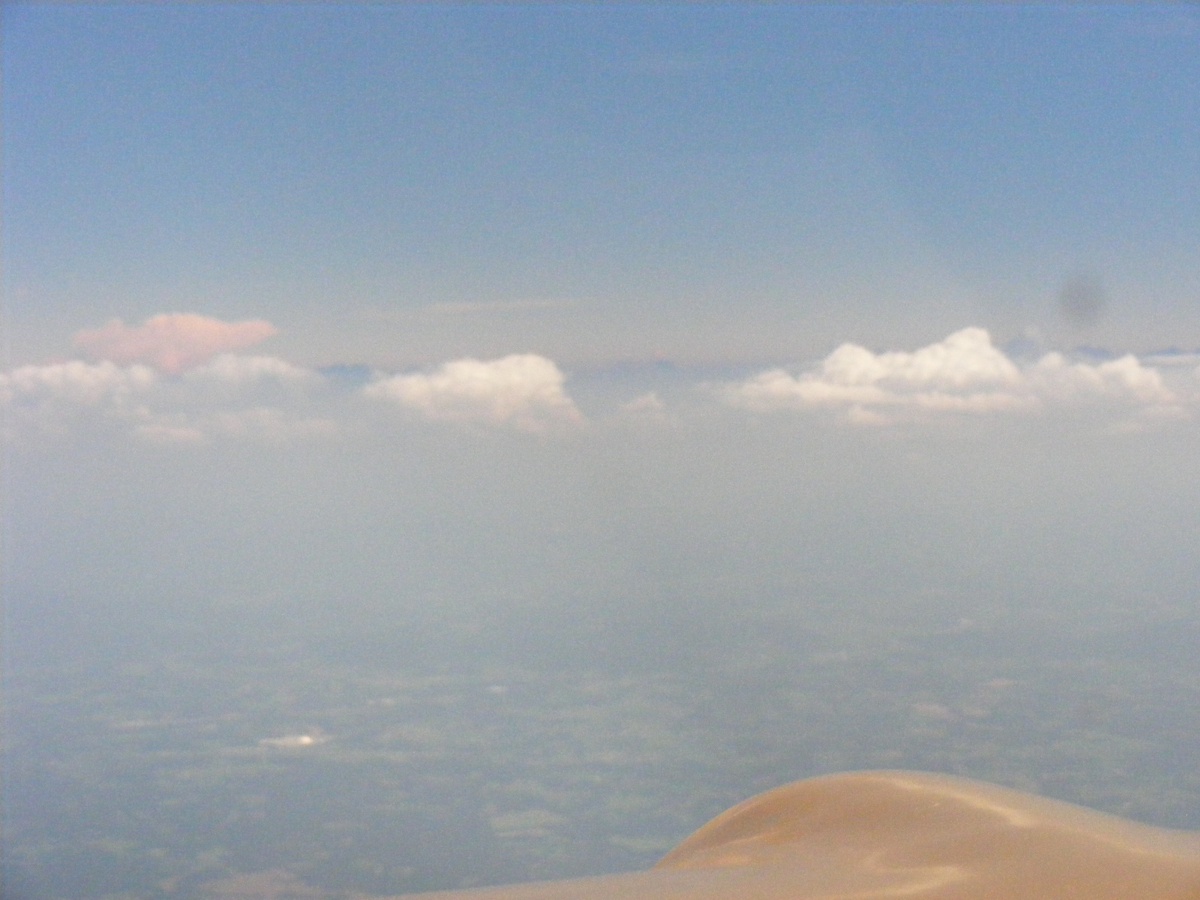 We are now more than 30 miles south of the Smithville area heading toward Chattanooga and points south.  With no shadows from above, the clouds are brighter. 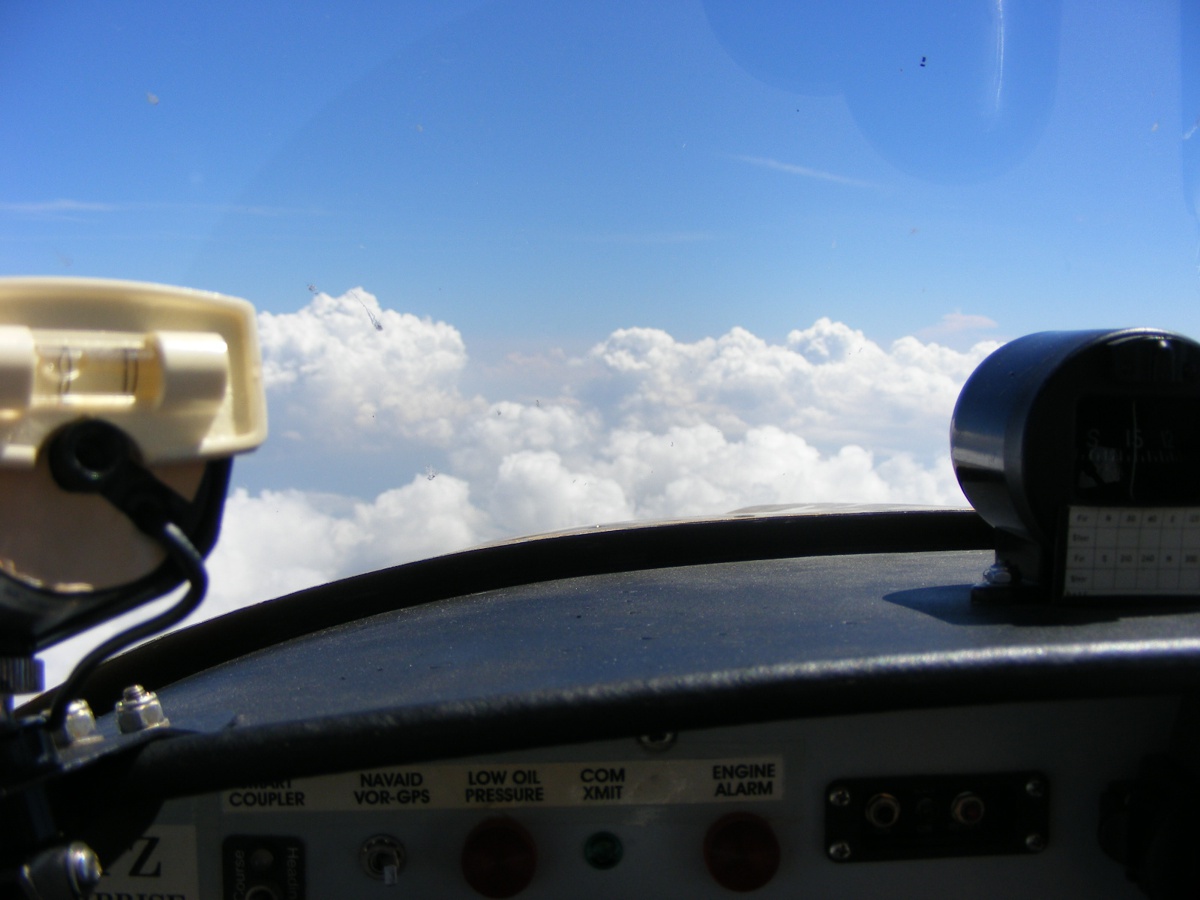 We have a 10 MPH tail wind on our way toward home just above 11,500 feet MSL covering the ground at 165 MPH at 2:47 PM Eastern Time.  Engine temperatures are normal again. 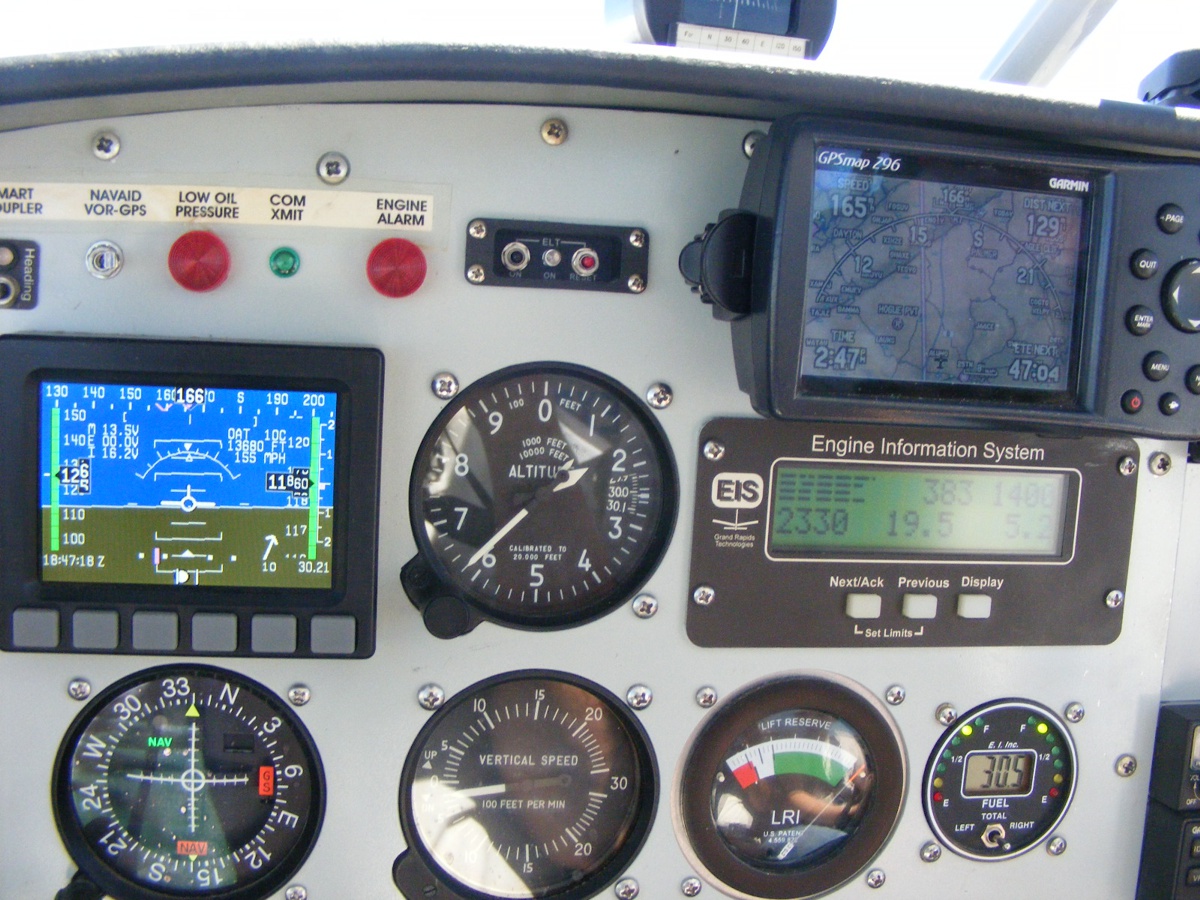 Marshall has my camera to take more photos inside that I cannot do when I am flying.  My pulse oximeter is on top of the instrument panel.  We compared our oxygen saturation levels and they were fairly close.  He is 36 and I am age 70.  Not bad at all for me as a cardiac survivor from 2011. 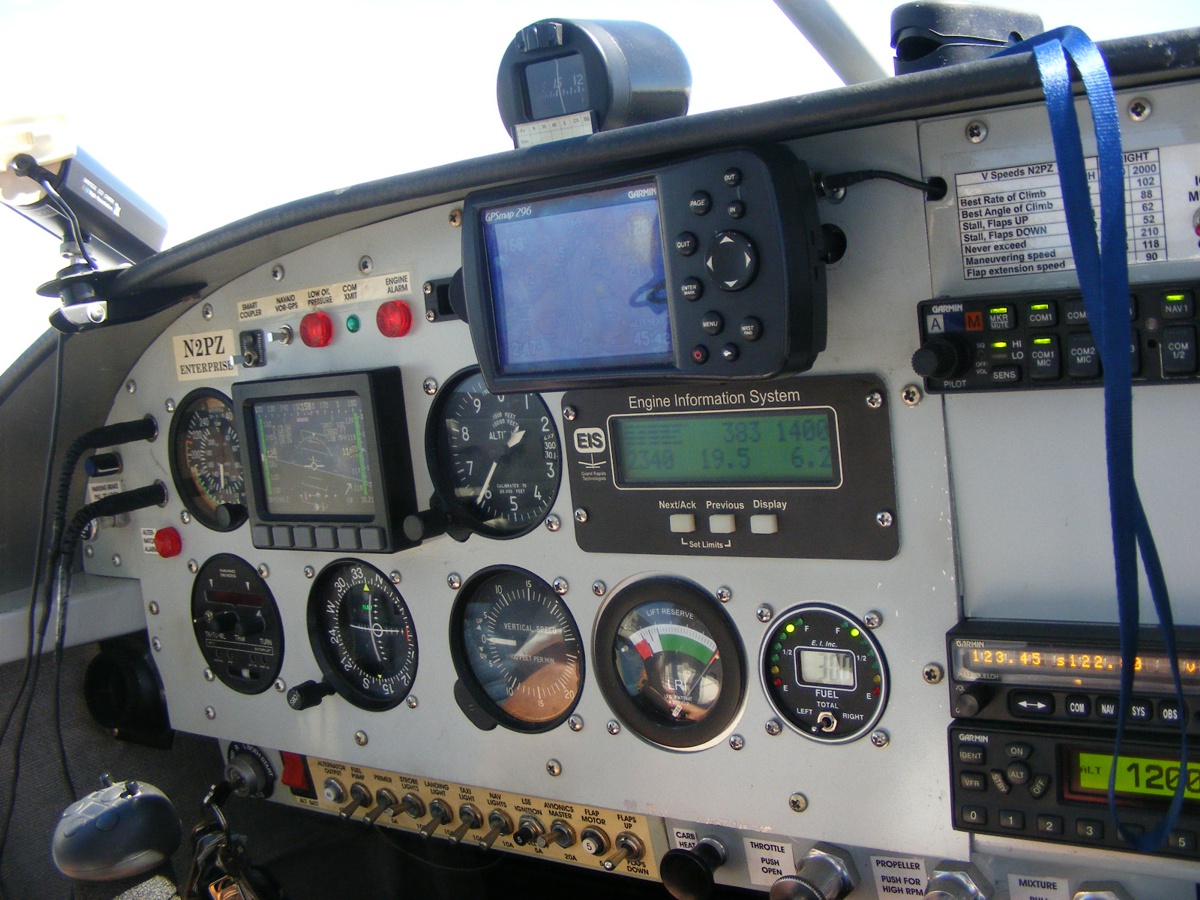 Marshall points the camera toward clouds to the west of our course line as we head south, but still in middle Tennessee. 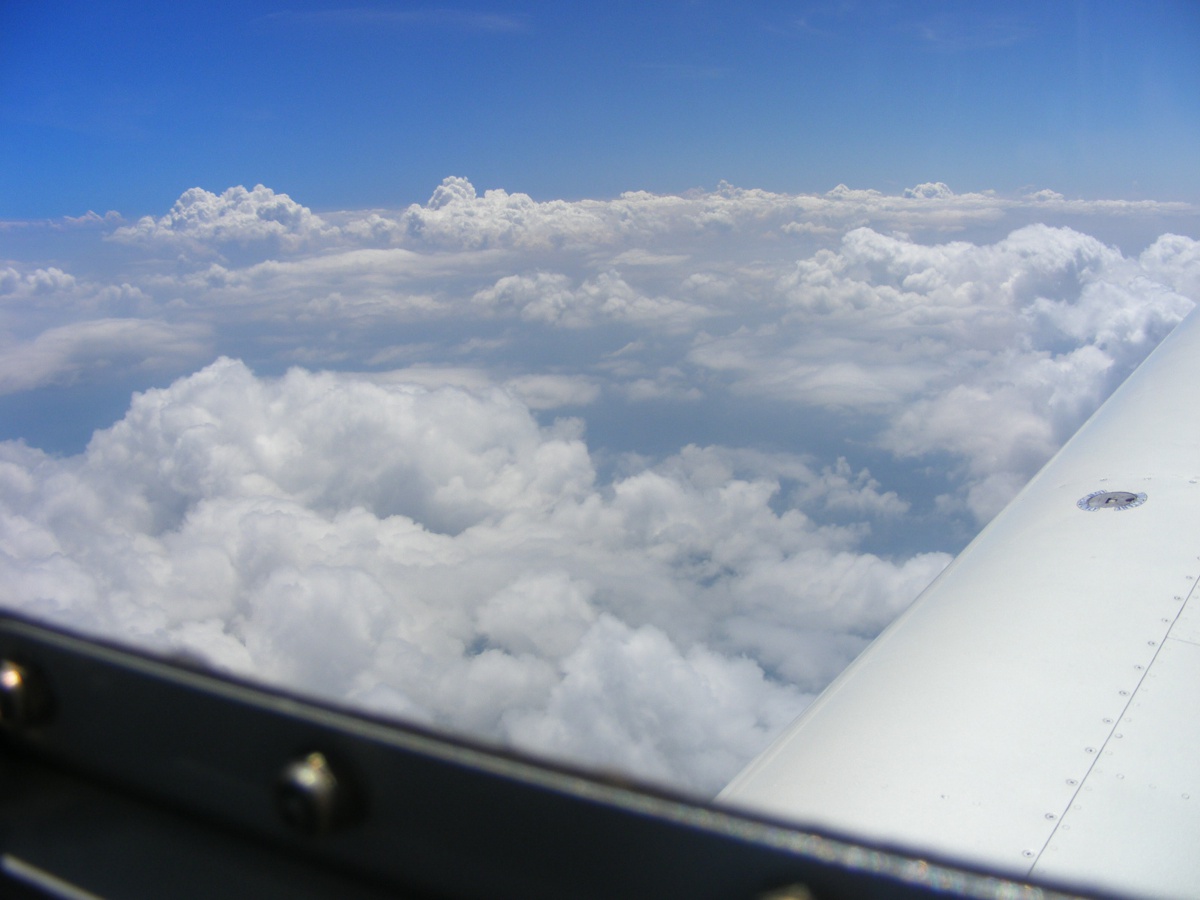 About two minutes later he took this image using his cell phone time stamped at 2:50:19 PM (corrected to Eastern Time).  These clouds are casting quite a shadow on the land below seen in the gaps between the clouds. 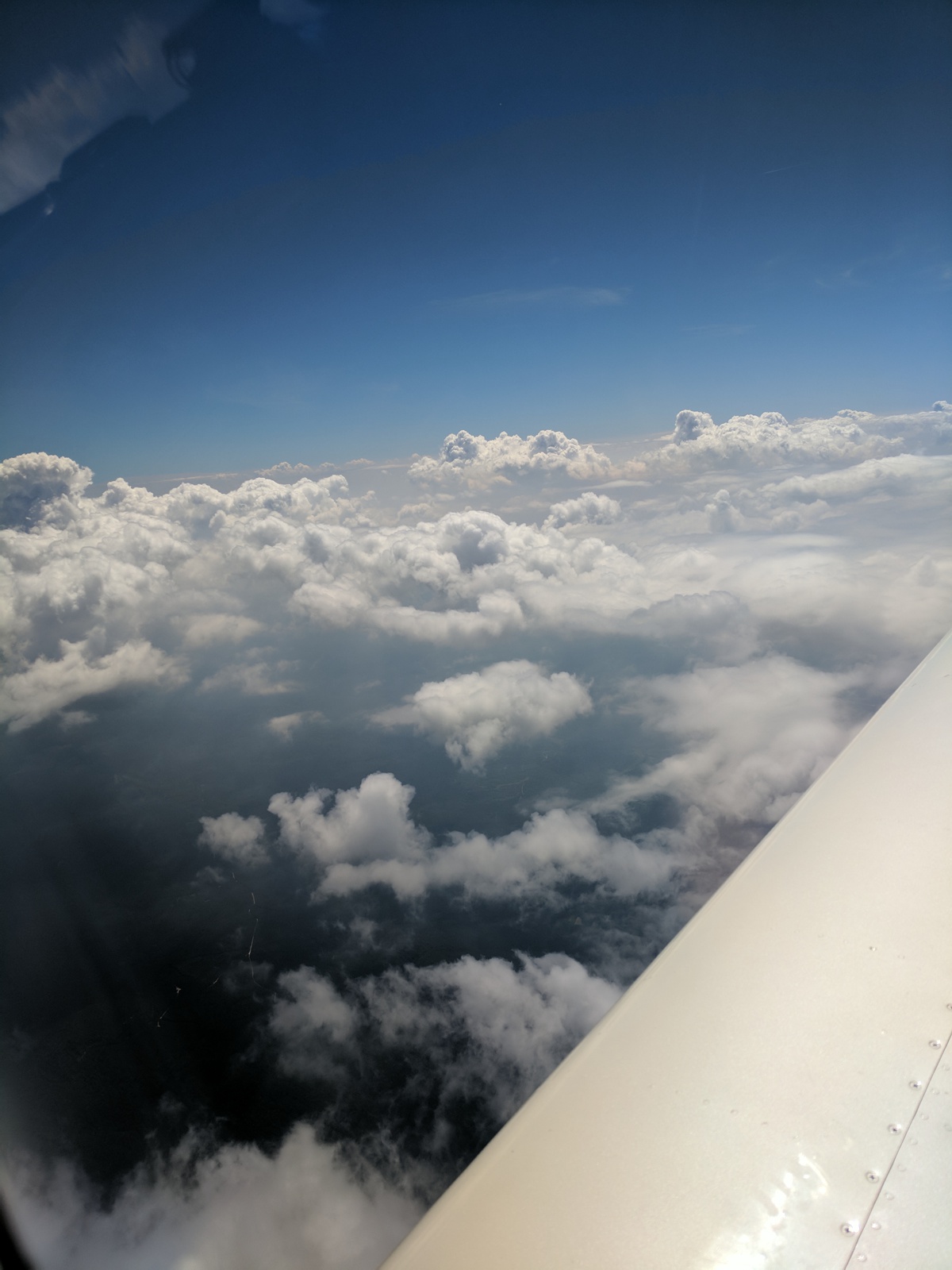 This image was taken only 6 seconds later looking ahead. 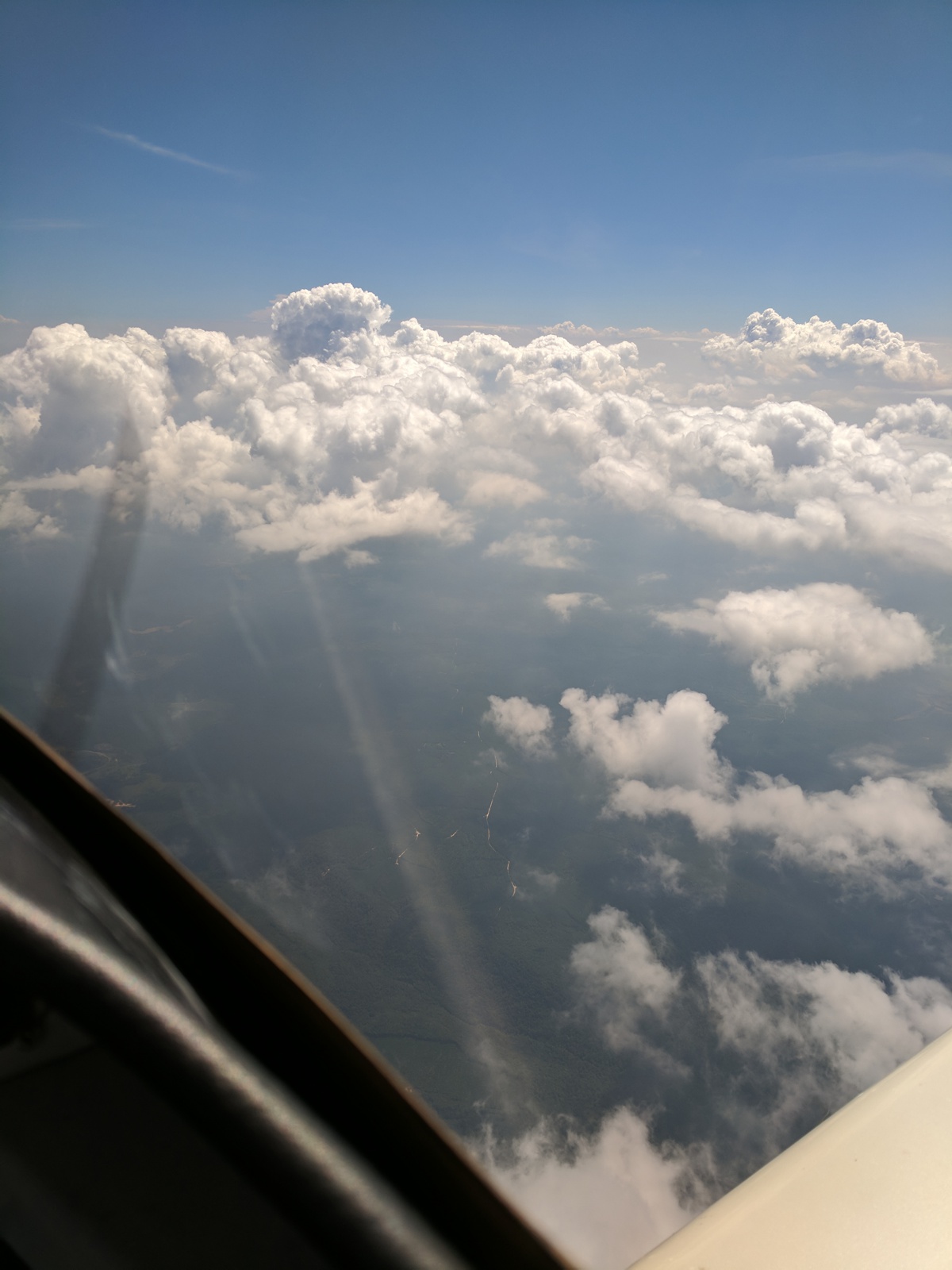 Another Marshall photo taken at 2:52:51 PM.  Here is the little yellow telescope used to check the height of clouds ahead.  That is how we can be sure we will maintain VFR flight conditions by staying out of the clouds.  Those two gray arcs are my propeller rotation vs. the shutter speed of the camera in his cell phone. 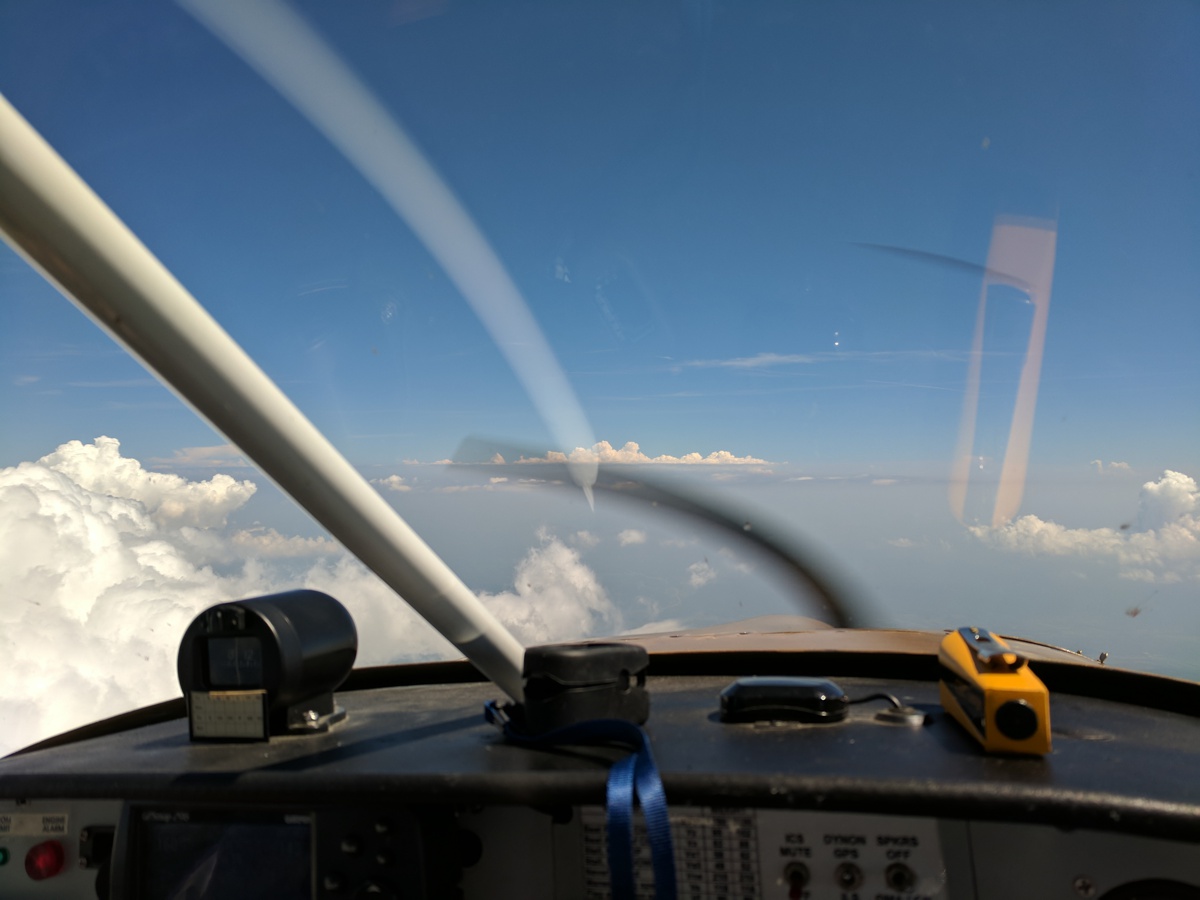 He took this photo at 2:53:04 PM as I am checking the camcorder sitting between the seats.  It should be running out of tape shortly as I started it just before departing the Smithville Airport before the Eclipse.  I have also been checking the old Navaid Autopilot and it is not healthy.  This flight has been hand-flown all the way. 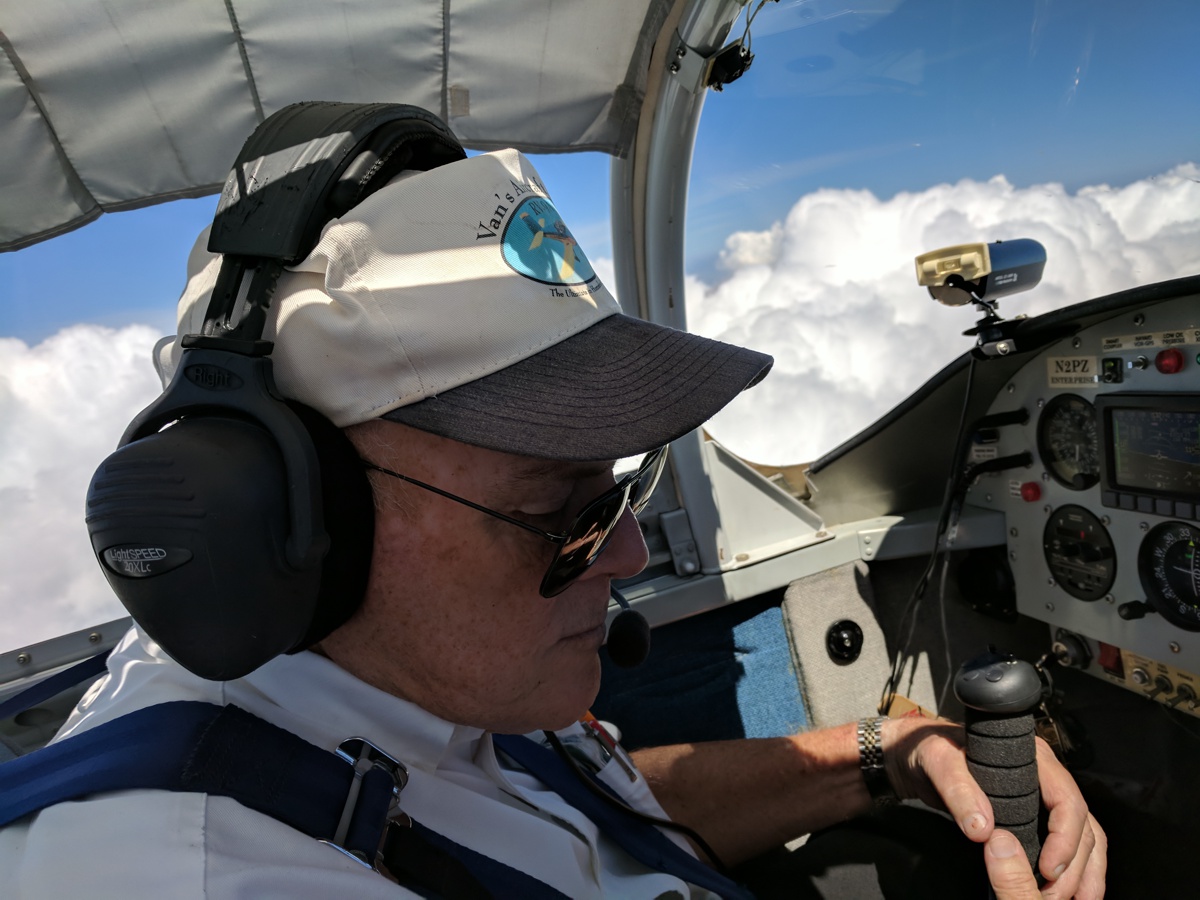 Marshall finally takes a "Selfie" at 2:53:16 PM to prove he was up here with me today!  Yea!  He has something to show his friends when talks about today's flight. 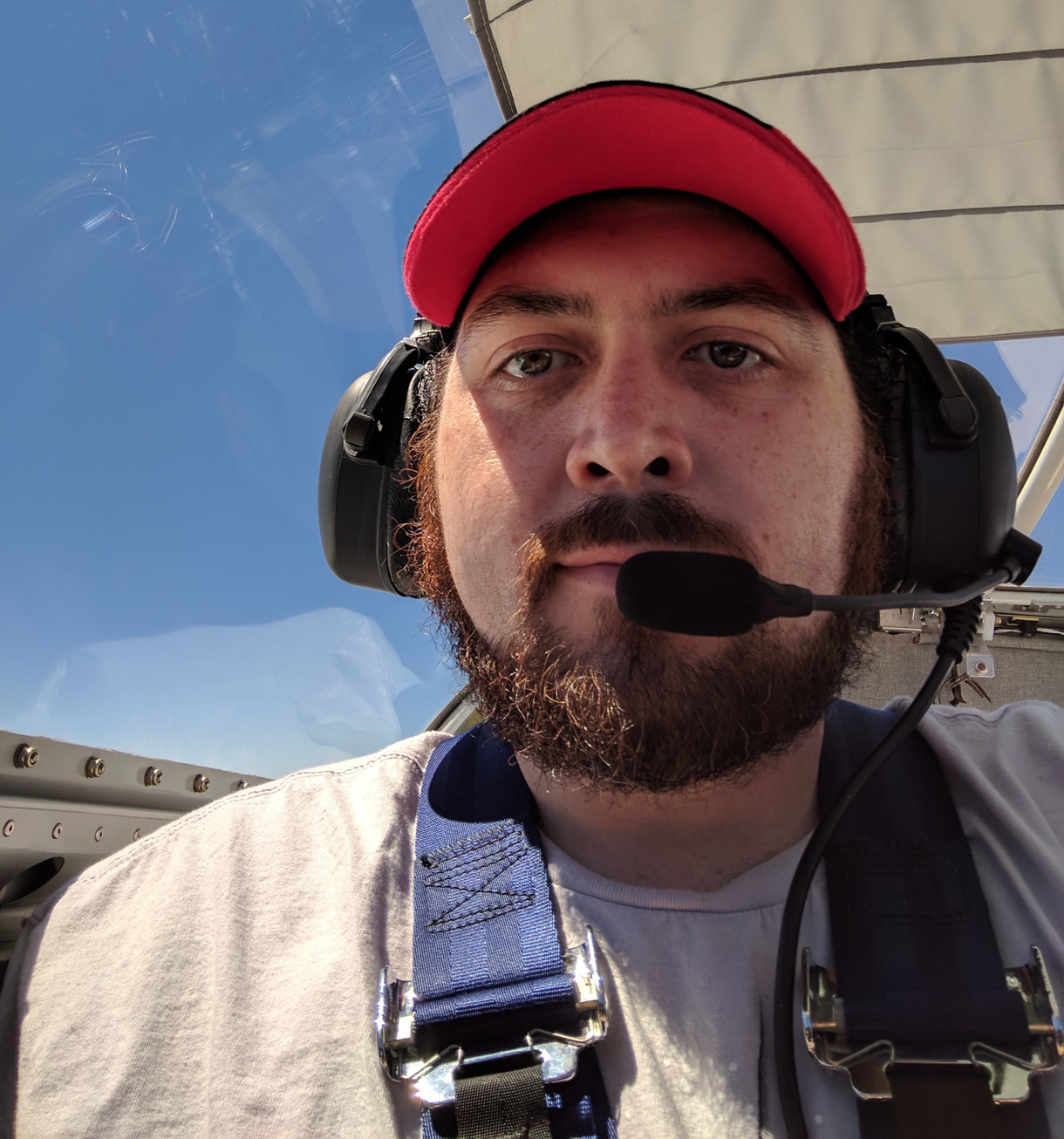 Marshall had downtown Chattanooga, Tennessee on his side when we flew past there at 3:03:47 PM.  The Tennessee River is flowing south from the Chickamauga Dam and past three bridges to the city and the fourth bridge just before the LEFT TURN around the west side of the city.  That bigger bridge carries Interstate 124 which runs concurrent with US 27 going to the north side of the river.  The second bridge is hard to see in this photo.  It was the first bridge across the Tennessee River at Chattanooga.  Now it is strictly pedestrians, no vehicles.  There is a park on the north shore.  The downtown tourist area is on the south shore.

You have seen me talk about Chickamauga, Georgia as the small town near Wendell's home air field.  Chickamauga Creek drains the national battlefield park north to the Tennessee River adjacent to the TVA dam that took its name from Chickamauga Creek.  Now you know a little more about the history of this area and where some of the Cherokee Indian names came from.  I lived around here for 11 years from 2001 to 2012 and I built my airplane while living in this area.  That large bend in the river that turns back to the north is known as Moccasin Bend as it has that shape when viewed from Point Park at the north end of Lookout Mountain. 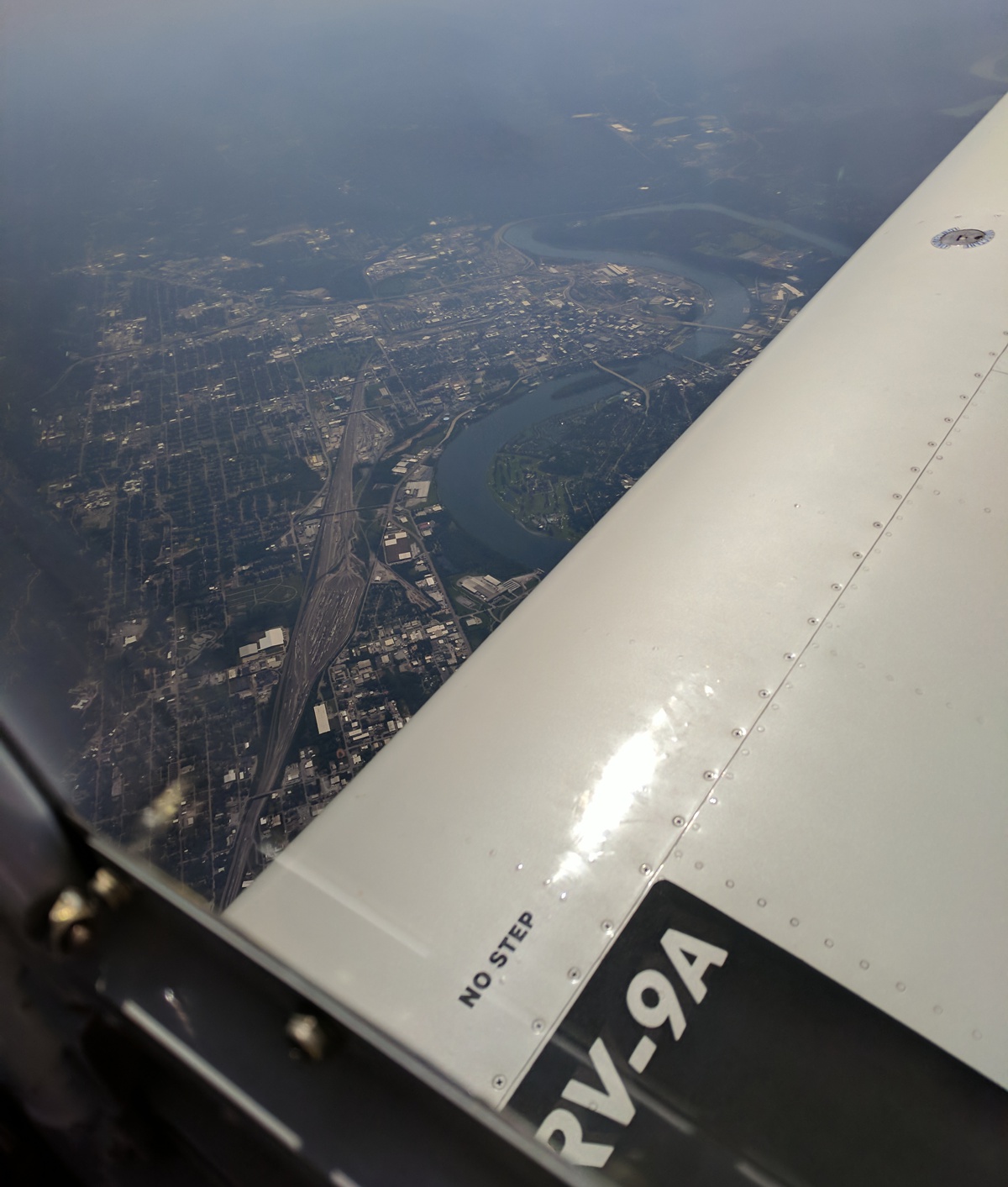 This image from my camera is time stamped at 3:05 PM.  The reflection from the canopy at the bottom of this photo is my left hand on the control stick.  Those clouds mark the location of two mountains I could see from the home in Dalton, Georgia where I spent my teen years.  The mountain closest to the Tennessee state line is called Grassy Mountain.  Just south of there is Fort Mountain.  It was named that from a Civil War military site on top of "Fort Mountain".  It was about 14 miles East from my home in Dalton. 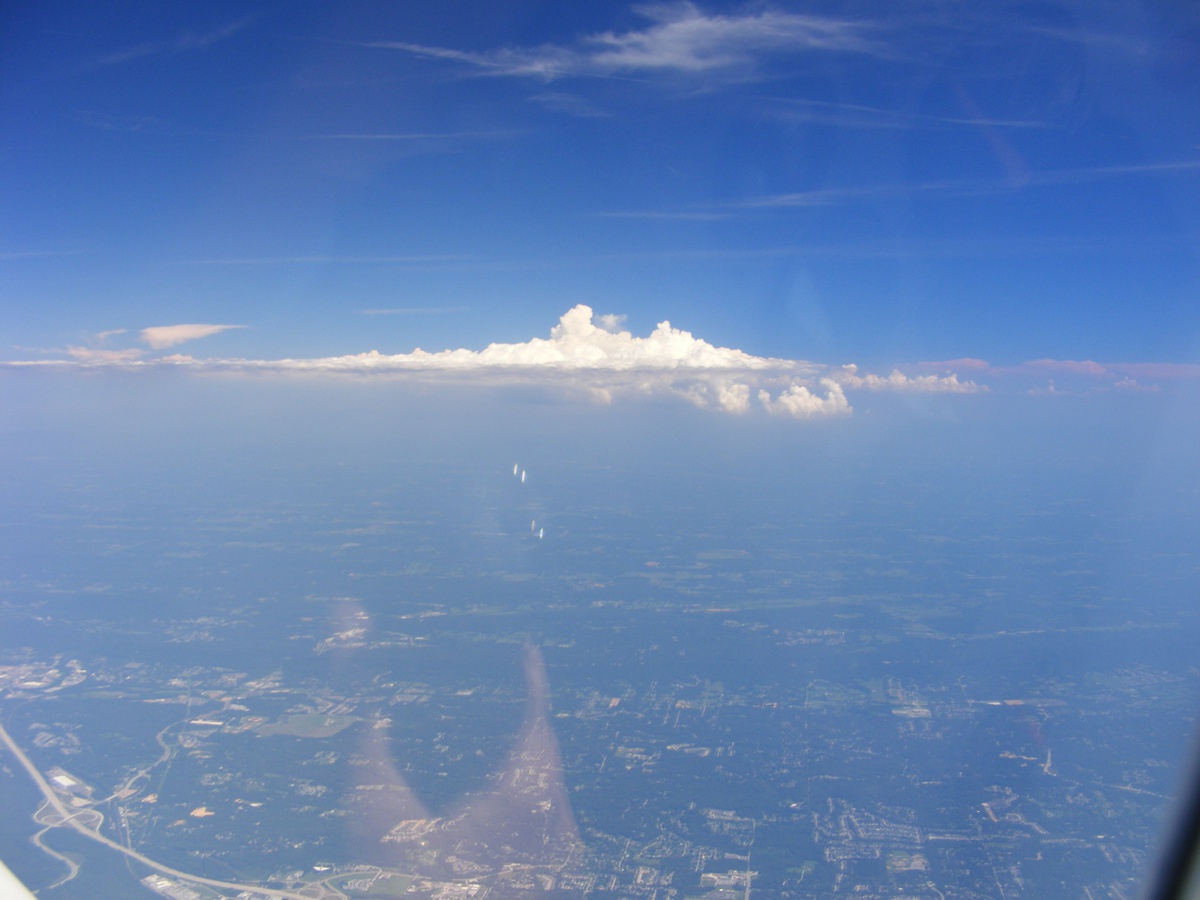