May 7, 2017:  Today is Sunday and the first flight since the oil change on April 23.  There was some much needed rain and some windy weather with crosswinds of 20 MPH or more at the Rockledge Airport in recent weekends.  Friday and Saturday had a major cool weather front come through this part of Florida with some rain, then clearing skies from the wind on Saturday.  I flew up past the Orlando Class B airspace on the north side to head west to the airport near Dunnellon, Florida (X35).  Winds varied as I climbed up through the different thermal levels to 6,500 MSL for the westbound part of the flight.  The highest layer of haze was around 6,000 MSL as seen here before I turned west.  The Atlantic Ocean is visible at the right side of this image.  I processed it to get some contrast of the ground through the haze below me.  (That processing made my cowling look like it has been sanded.) 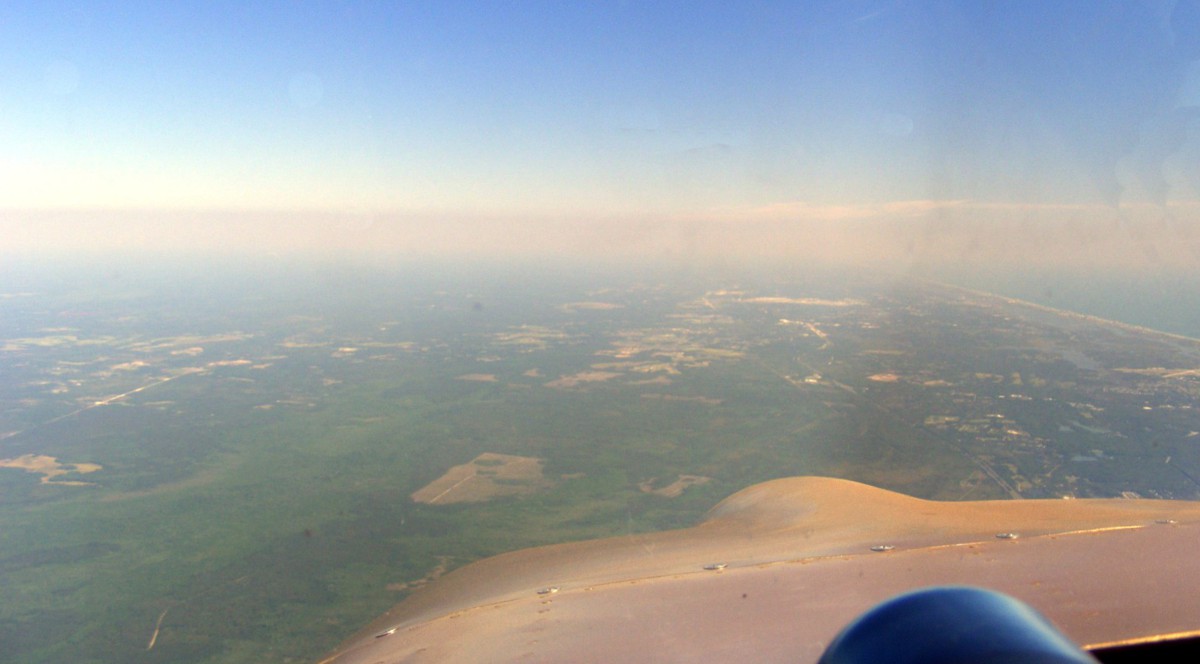 Turning inland shows the usual wet dry areas of Central Florida, and of course a reflection from the inside of the canopy and wind shield.  I also processed this image for some contrast. 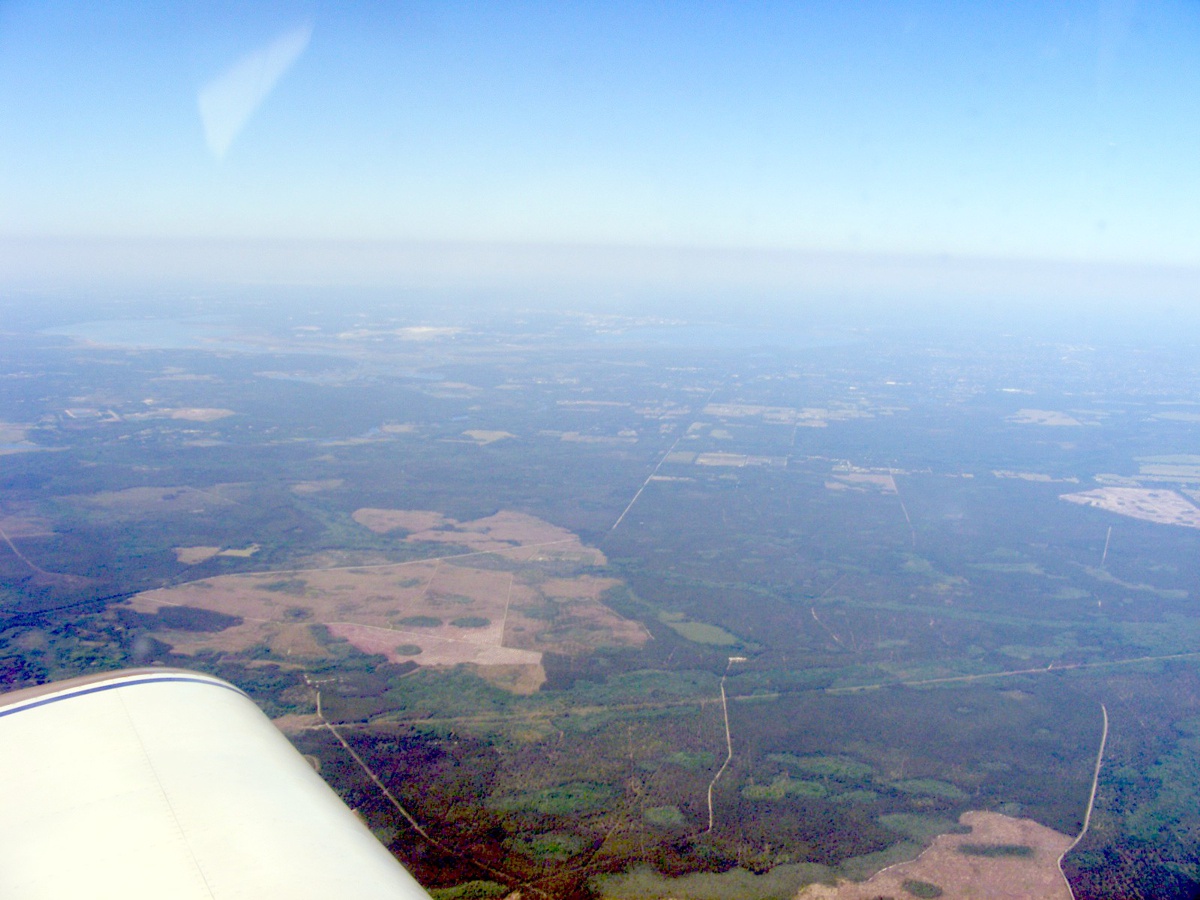 I called Jacksonville Center to learn the R-2910 bombing and gunnery range is COLD today with no military pilots shooting live ordinance in the middle of the Ocala National Forest north of my course today. 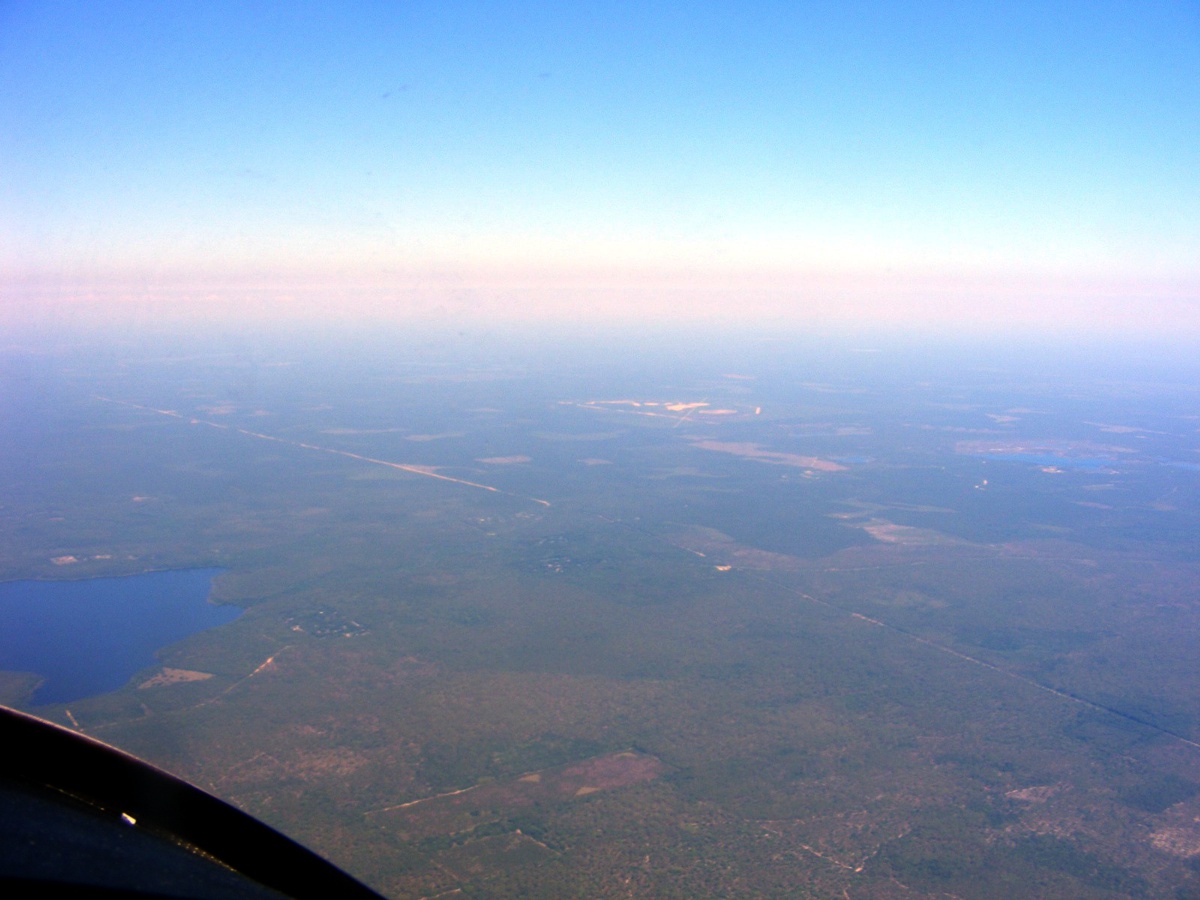 On the south side of the airplane it is civilization as normal and Lake County named that for a good reason, they have plenty of lakes. 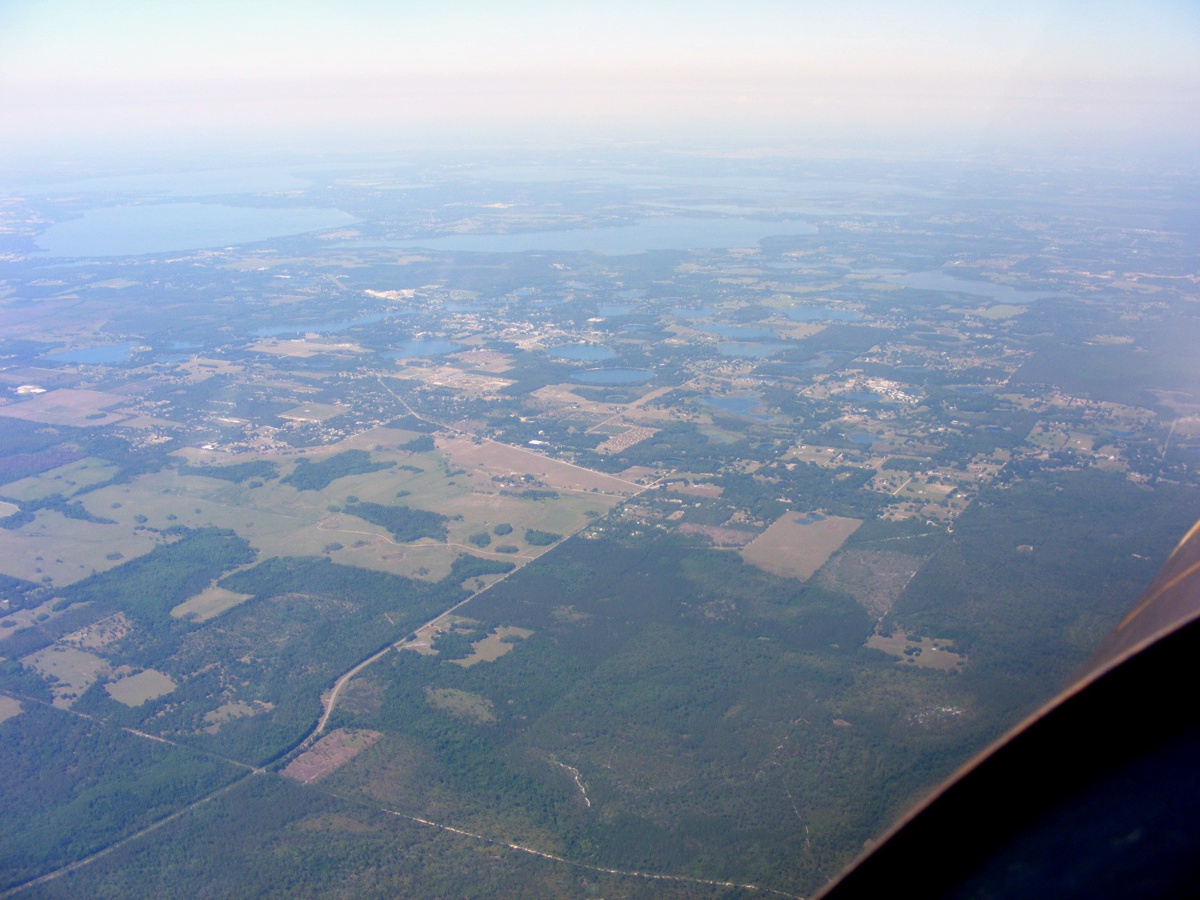 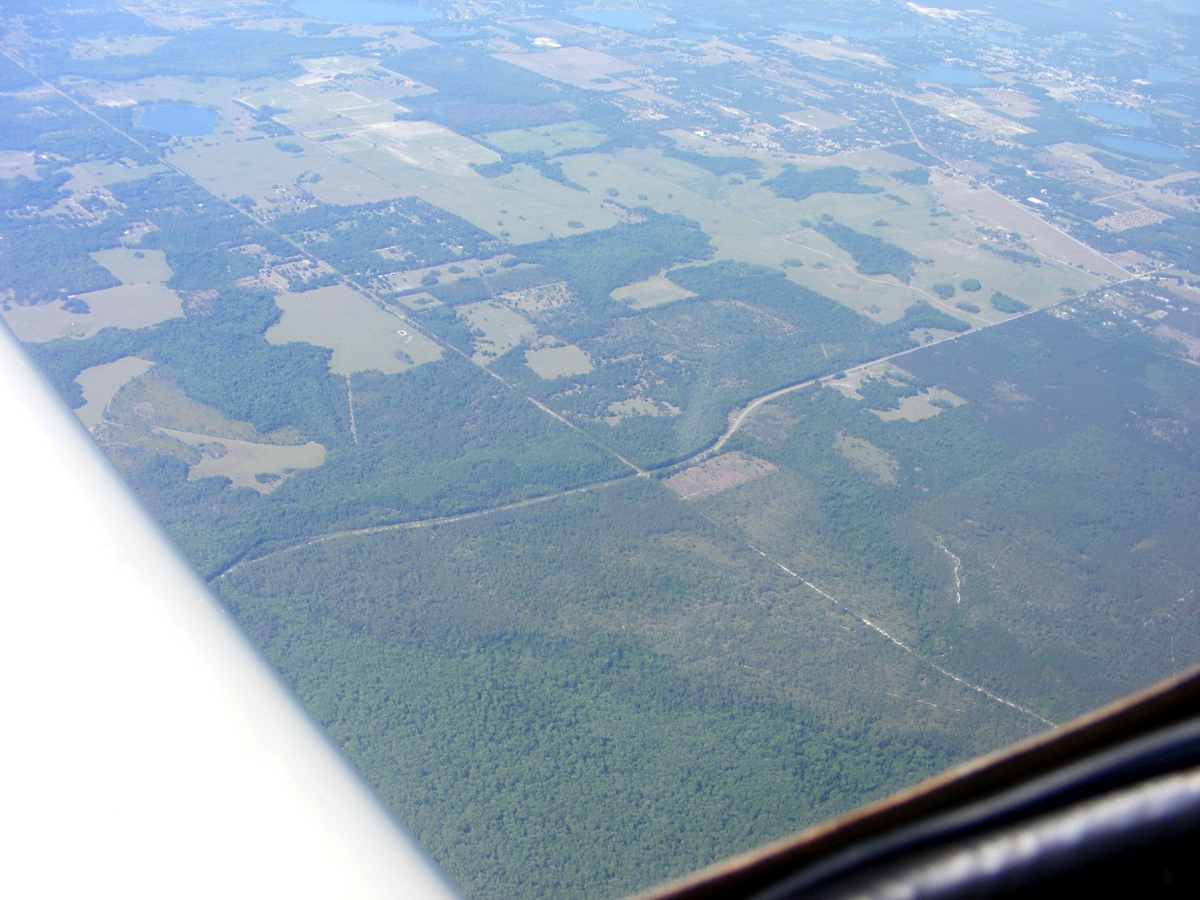 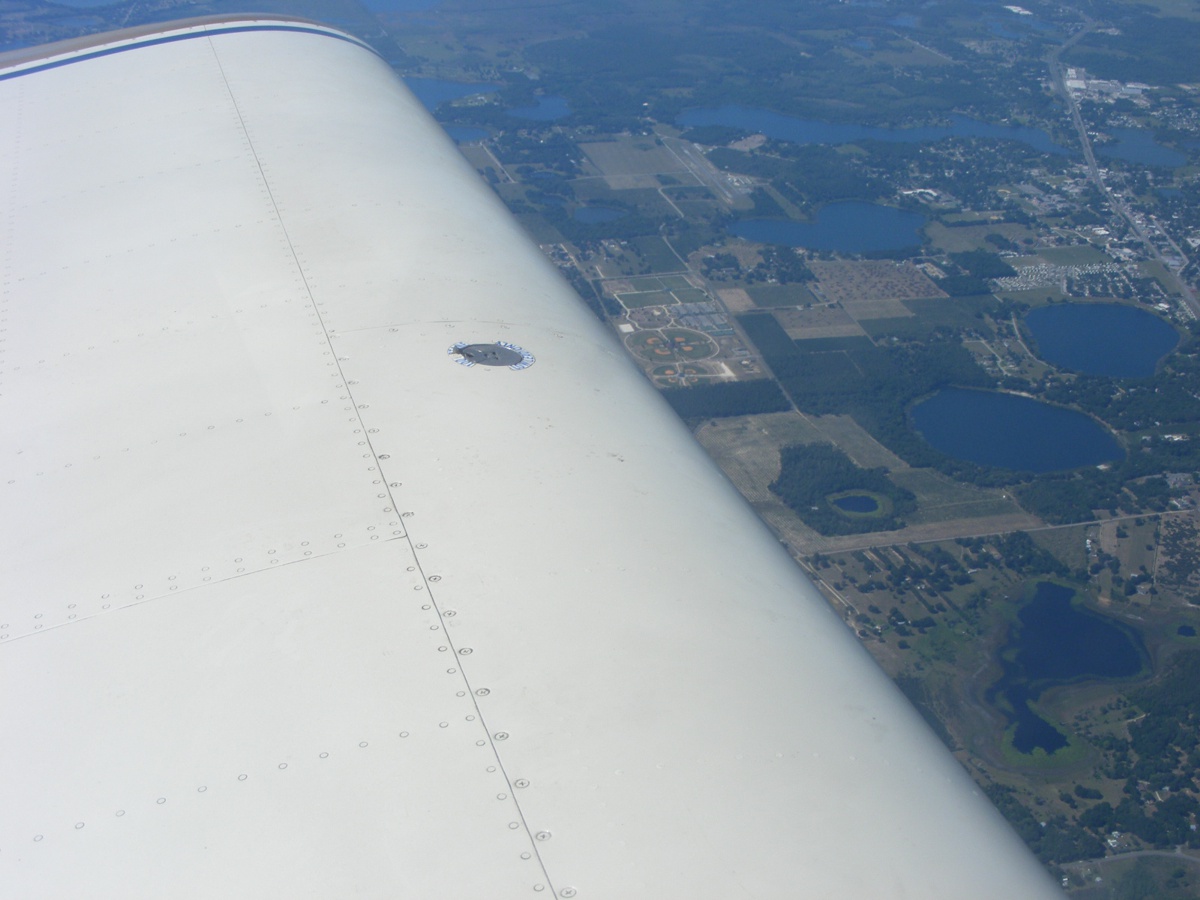 Here is a closer view of the bombing range from 6,500 feet MSL. 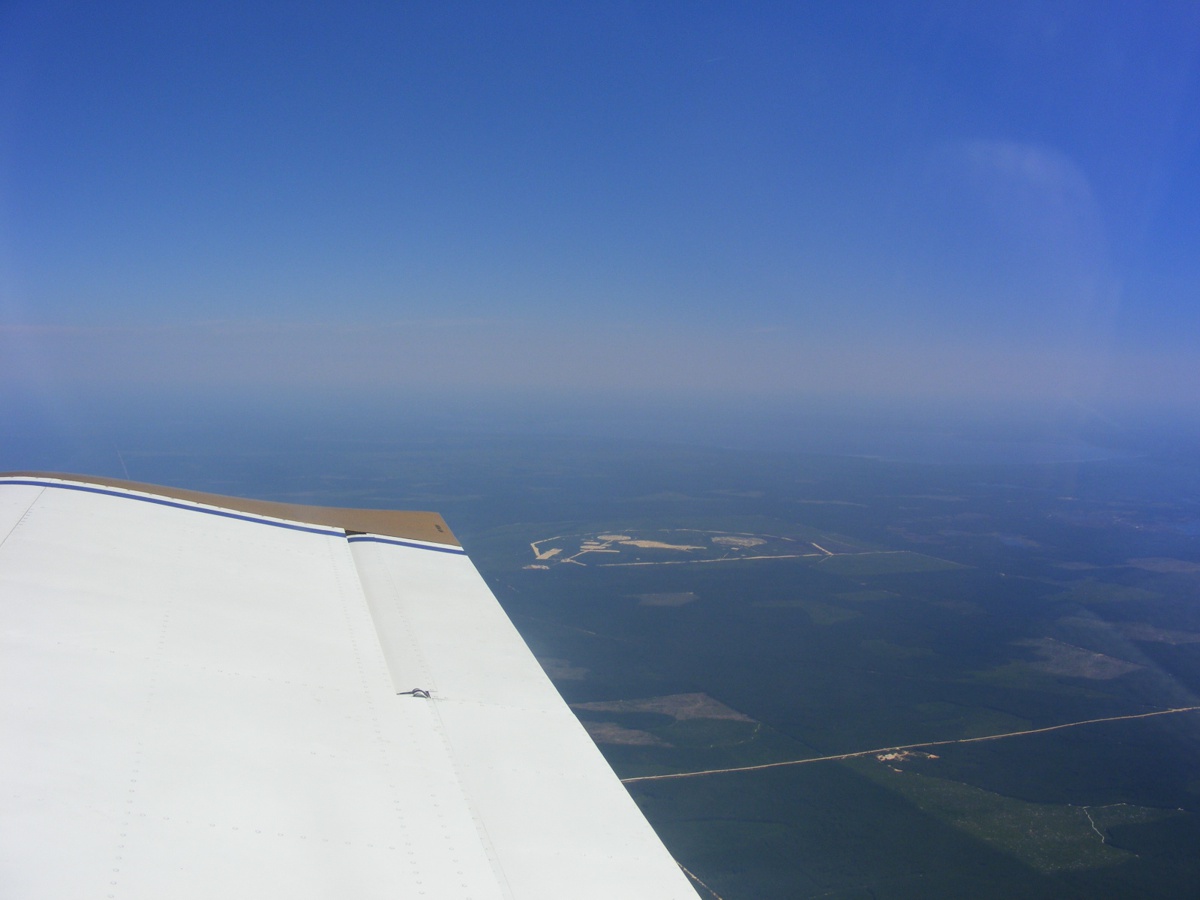 The winds in Marion County were the talk of the pilots on 122.8 MHz landing at a fly-in at the Williston Airport while things were quiet at the airport near Dunnellon.  I was busy working on the approach for a touch and go that could have been nasty.  The trip west bound had headwinds, and the trip homeward had tail winds of 30 MPH.  The winds aloft slowed down as I came back down.  The cross wind was 15 MPH at pattern altitude, and dropped to 8 MPH on final approach to a smooth, no bounce landing.  How sweet it is! 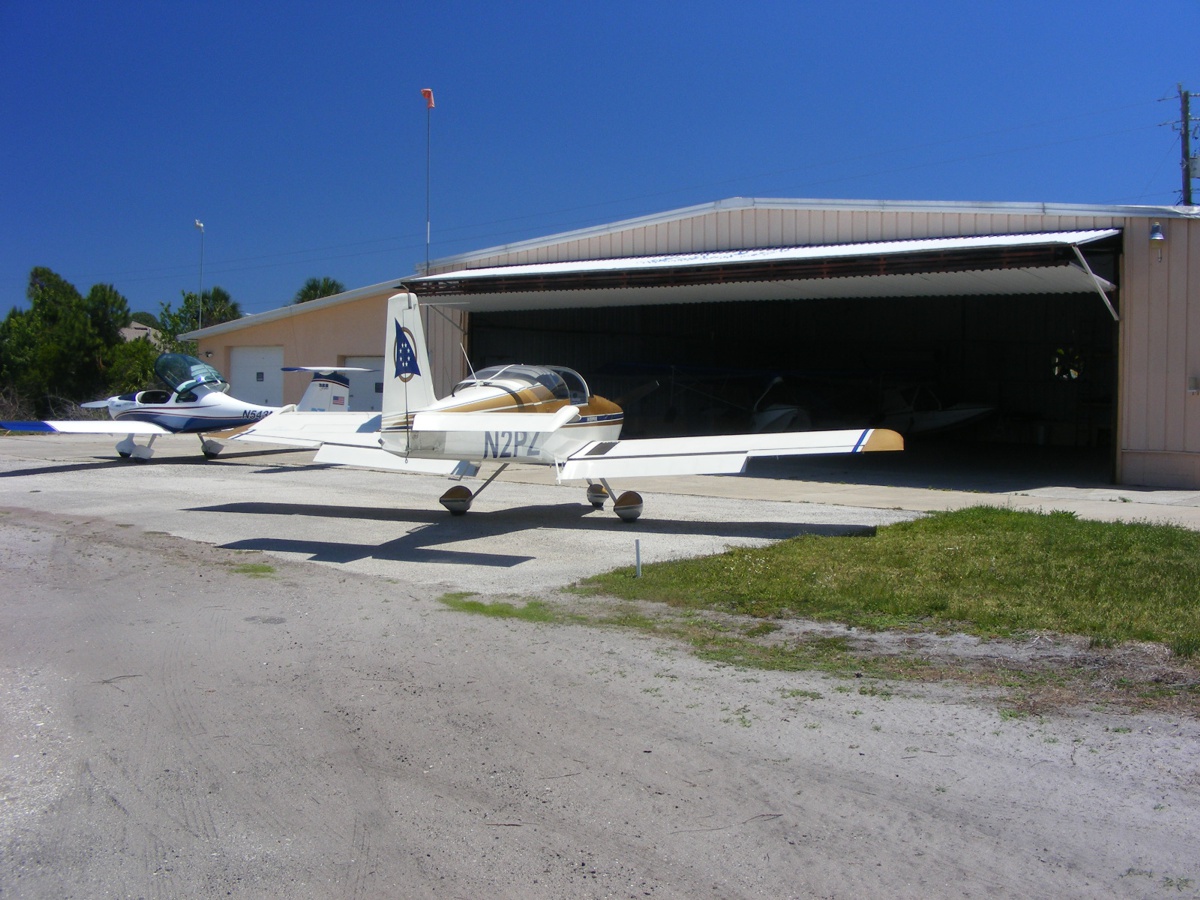 I worked alone to move the Faeta out before I departed, and put both planes away after my return.  Total flight time today was 2.2 hours.  I now have about 12 gallons of fuel and that is low enough to pump one tank dry at a time to replace my fuel drains in my next maintenance session.  More about that later.

Here is the route of flight today across central Florida avoiding the Orlando Class B airspace as usual, and the sight-seeing route for today. 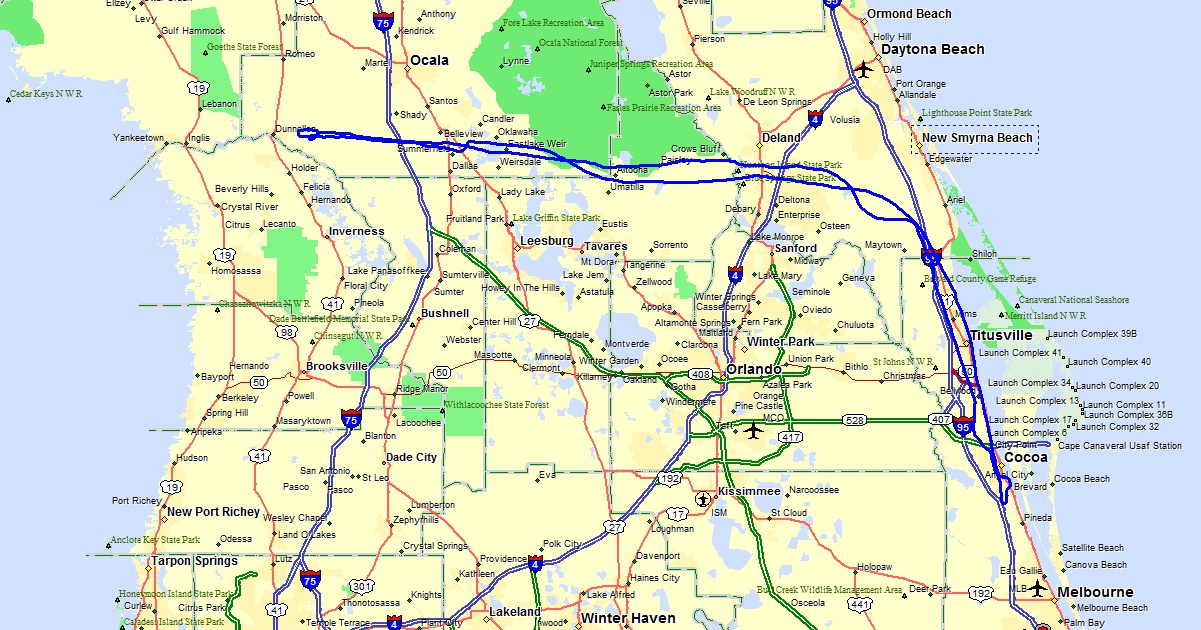 May 20, 2017:  Another Saturday at the hangar for some light maintenance.  I recently read an internet blog about a pilot whose fuel drain valve failed and realized I needed to check my three valves.  It has been almost 12 years since my first flight of Enterprise RV-9A.  If the "O-ring" that is the valve fails in flight, fuel could be lost quickly.  I bought all three valves a few weeks ago and had to wait until I used enough fuel that I could easily drain each fuel tank one at a time using my 5-gallon fuel container as seen in this photo.  I have done this before when I was sealing some rivets on the LEFT fuel tank.  Doing this safely required me to disconnect the negative battery cable from the battery.  I then turned on the master switch and the boost pump switch.  I then used my pocket screwdriver through the "ring connection" of the ground cable with a twist in that cable to get a good connection in the threaded hole of the battery negative terminal.  The fuel line running to the carburetor was removed and placed in the opening of the gas can before completing the temporary ground connection at the battery to run the electric boost pump.  The entire contents of the left fuel tank did not fill the 5-gallon container. 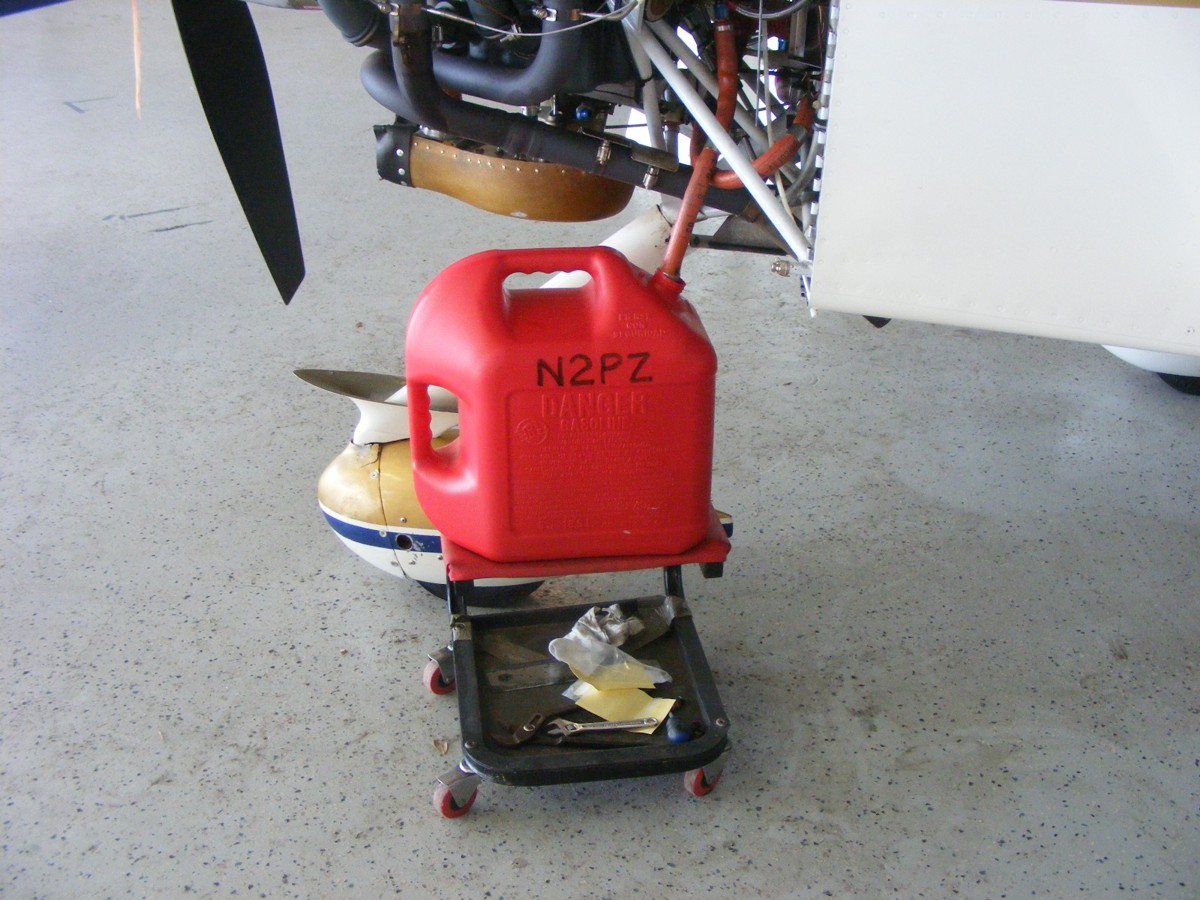 With no fuel in that tank, I removed the old quick drain valve and was greeted with a small amount of fuel dripping before I could insert the new valve and tighten it properly.  Here is that new fuel drain valve in the left fuel tank.  I then poured the fuel back into the left tank and started pumping fuel from the RIGHT tank.  I turned off the pump before reaching the 5-gallon limit of my fuel container, then poured that fuel into the LEFT tank also.  I drained the remaining fuel from the RIGHT tank and replaced that fuel drain valve.  I then replaced the third valve at the bottom of the gas collator mounted on the firewall next to the electric fuel primer valve.  When all three valves were secured, I poured the few gallons in the red fuel container back into the RIGHT FUEL TANK and then transferred a few more gallons from LEFT to RIGHT to balance the load somewhat.  I then restored the negative power cable connection to the firewall ground point and double-checked the amount of fuel in each tank on my electronic fuel gauge readout. 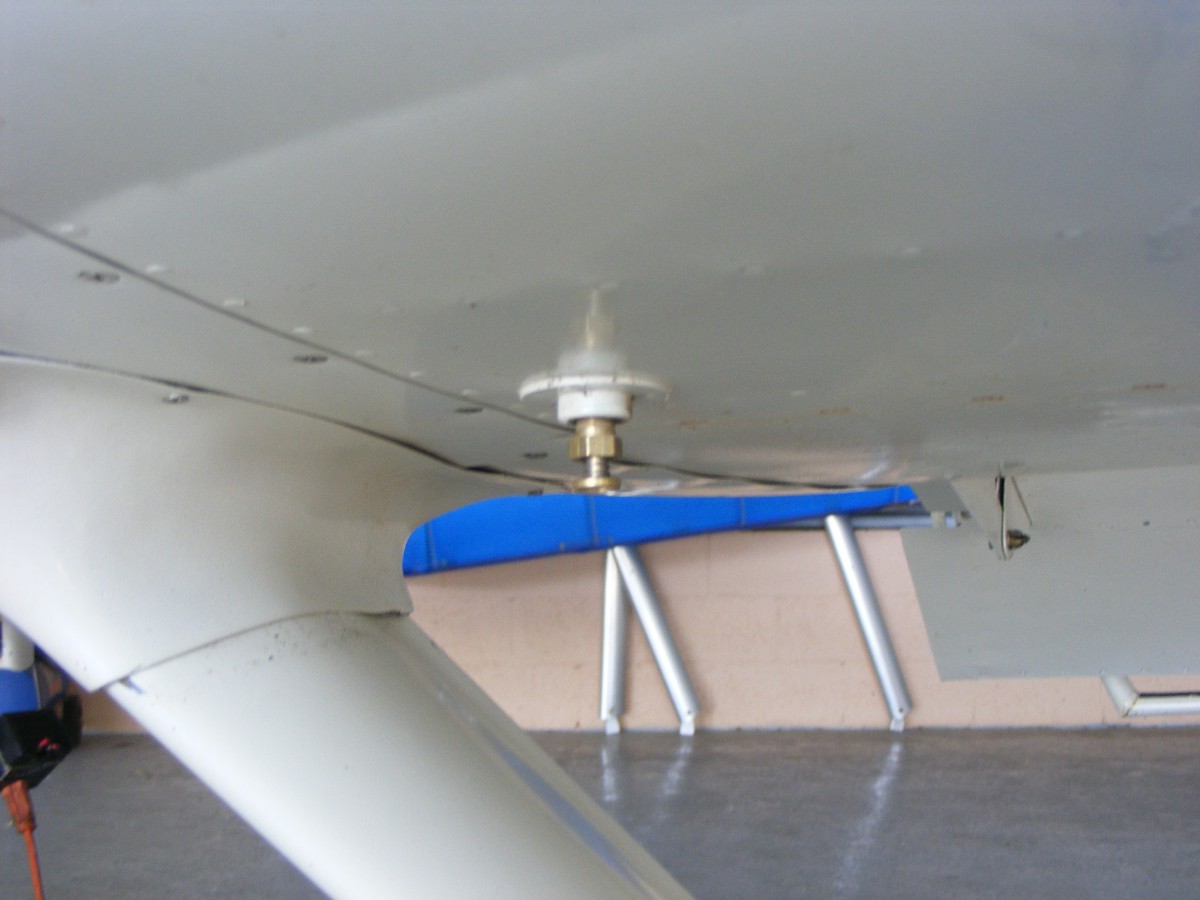 That BLUE fabric in the background is one wing of an Aventura II amphibian hanging on the wall behind my airplane in the hangar.  No engine run today and no photo of the airplane with the cowling re-attached and ready for the next flight.  I started the process around 1:20 PM and finished around 5 PM.