April 3, 2013: I had an early flight this morning via Delta Airlines up to Atlanta and connected to a non-stop flight to Los Angeles on business for the remainder of this week and all of next week out west.  The travel day was Wednesday with two days of work Thursday and Friday for the client to help them set up their headend for best performance with our company fiber optic links for CATV signals.  I learned a bit about where some of the popular TV shows come from while I was here.  My work day started at 6:45 AM. 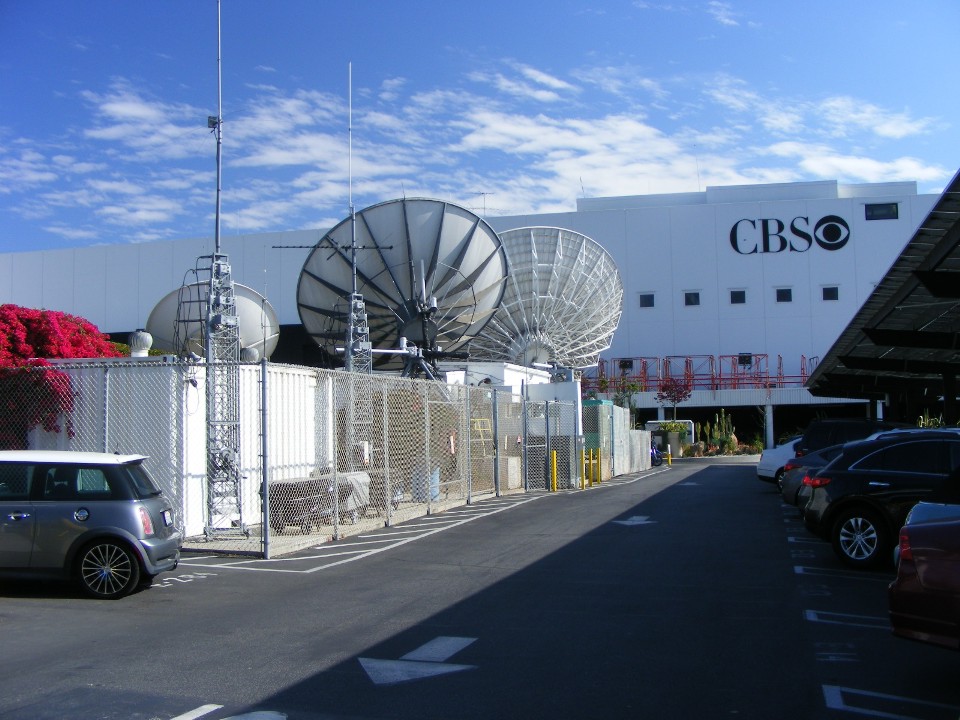 These two photos were taken at the end of my work day on Thursday, April 4, 2013. 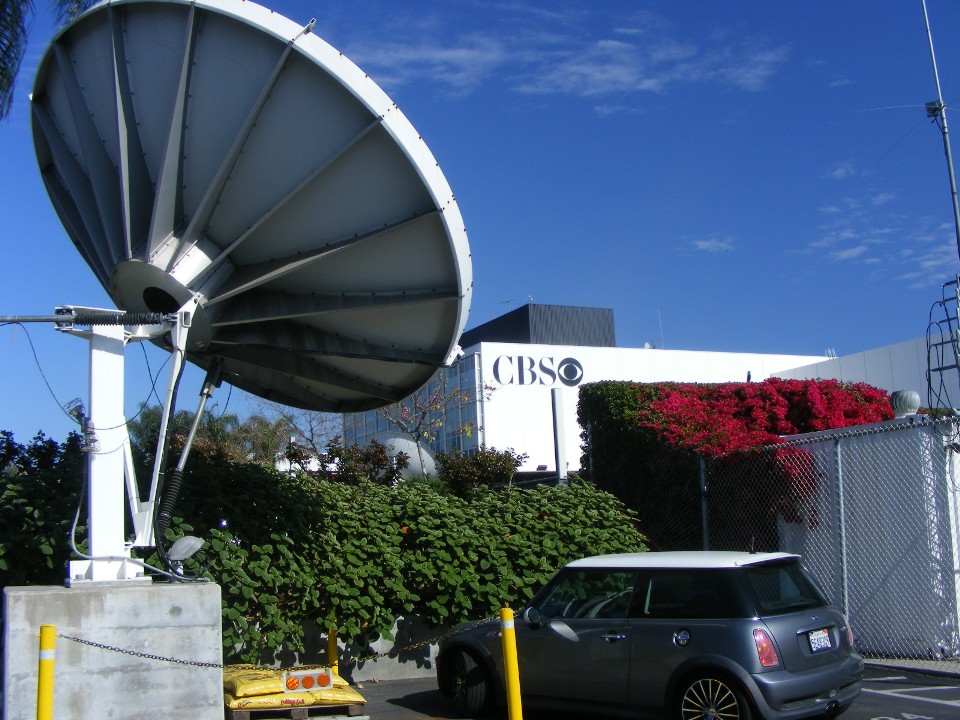 I went north over the ridge to the CBS facilities at Studio City arriving at 5:30 AM on Friday to work on the other end of the fiber optic link before there was too much activity there.  What I discovered there gave me more to research back at the headend at Television City seen in the photos above.  I brought back a Tektronix RF spectrum analyzer to better observe the output from the headend.  I gave the usual basic training for CATV system performance to be sure the key staff members understand how third-order distortions are minimized with proper RF signal levels on all channels and RF amplifier input and output signal levels.

The airline flights on Wednesday were a problem as they brought back my old problem of Sciatica.  My left hip and leg were in pain and by Friday evening, it was tough to get around.  Sleeping in the most comfortable position was my main goal.   I had stayed at the Rodeway Inn just across Beverly Boulevard from the CBS facilities seen above.  When I finished the work day on Friday around 3 PM, I went to a nearby Denny's restaurant on Sunset Boulevard to get a late lunch / dinner.  I sat down at the table and put my left leg up on the chair at the other side of the small table to get some relief from my pain.  When I left the restaurant, I drove up to the Griffith Park Observatory and realized there was no parking for me or a chance to see anything other than the scenic view through the windshield of my rental car.

April 6, 2013:  On Saturday morning, I checked out of the Rodeway Inn and moved down to the Day's Inn near the LAX airport to catch an early morning flight for Sunday morning.  Along the way, I stopped at the IHOP on Manchester Avenue a few miles from the 405 freeway and the motel.  I filled up the rental car with fuel when I was driving from the restaurant to the motel.  I slept in much of the evening and did not go out again until 5:30 AM Sunday morning to turn in the rental car.  My room in Las Vegas was reserved beginning Sunday.

April 7, 2013:  The Sunday morning walk to the Avis shuttle bus in the parking lot was tough.  The driver helped me with my bags getting on the bus and off at the Delta Airlines curb side baggage check in location at the airport terminal.  When the sky cap saw me coming the few feet from the bus, he grabbed a wheel chair and put me in it immediately.  In nearly 42 years on the road, this was the first time I needed this kind of service at an airport.  It was certainly appreciated to get that kind of help through security.  When I got to the security scanner, the TSA agent noticed something was not quite right and asked about something on my chest.  I showed them the scar and rubbed my fingers down the titanium wires through my sternum from the CABG heart surgery from June 2011.  I did not have any more problems with security.  I was the first one to get on the A320 airplane for the relatively short trip to Las Vegas.  I was taken by wheel chair through the Las Vegas airport.  I had time for a "breakfast sandwich" in the concourse before heading to the baggage claim.  I took a shuttle bus to the Riviera Hotel where I would be staying to attend the NAB Show at the Las Vegas Convention Center April 8 to April 10.  I rented an electric scooter Sunday afternoon at the hotel and kept it until I departed on Thursday.  It was the only way I could do this trade show.  The National Association of Broadcasters (NAB) has the largest trade show I have ever attended.  The Las Vegas Convention Center is much bigger than it was when I attended this same show in the early 1980's.  Every hall in every building was filled with this ONE trade show.

My largest distributor was the first stop I made on Monday when the show opened. 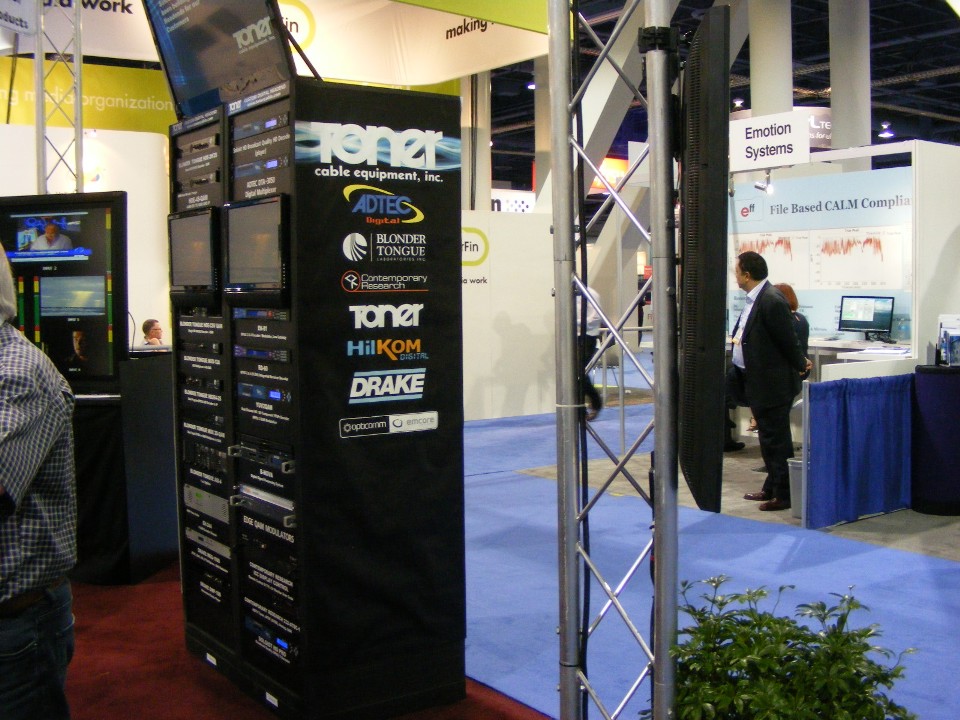 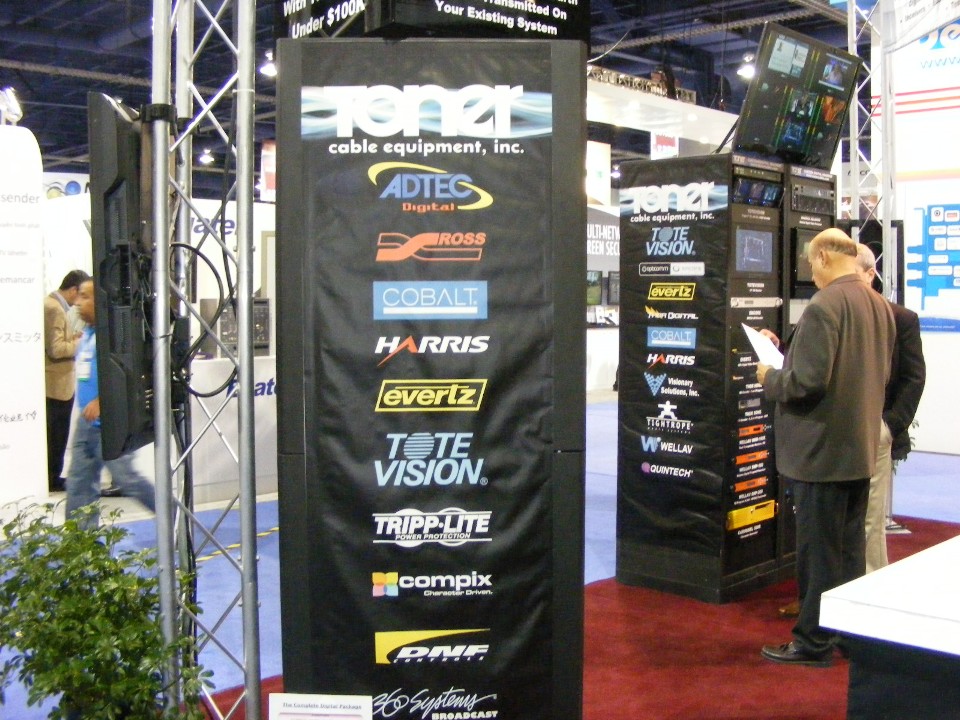 My company has one chassis of demo units at the bottom of the 19-inch equipment rack seen in this photo on the right. 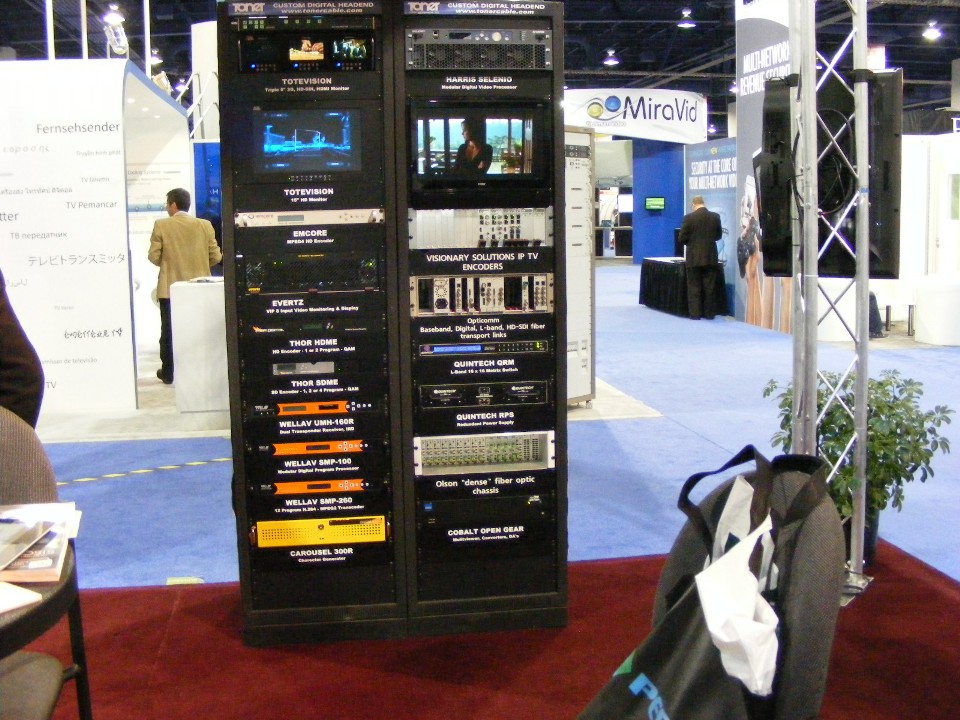 April 11, 2013:  I rented another Avis car Thursday morning from the office across the street at Circus Circus Hotel and Casino.   I had been over there on Tuesday in the electric cart to be sure the Avis agent could come over to the Riviera to pick me up on Thursday.  It worked out well on Thursday.  I put in my GPS and headed toward St. George, Utah for a customer visit on Friday morning, April 12.  I stopped for lunch at Kentucky Fried Chicken in Mesquite, Nevada near the Arizona state line on Interstate highway 15.  I was surprised to see snow on the nearby mountain east of the town. 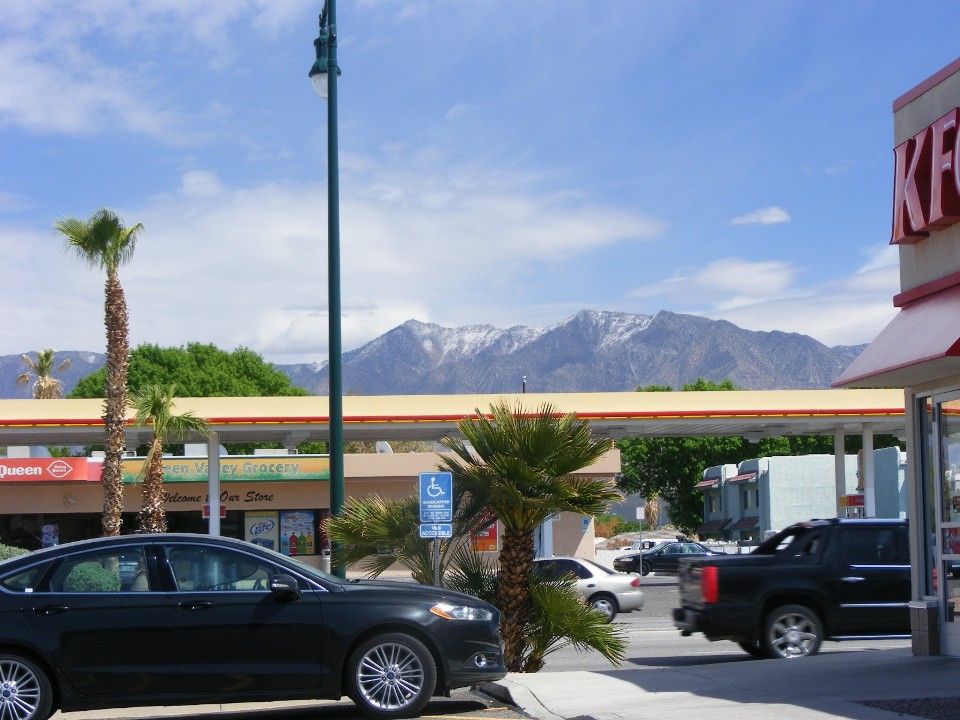 I-15 cuts through the Virgin River Gorge in the northwest corner of Arizona.   It is a colorful view as long as you don't expect to see much GREEN along the way.   I actually took these next couple of photos on my return trip on Friday from an exit about half-way through the gorge.  The Google Earth aerial photos of this area are very good if you want to look down on this landscape.  This photo is looking north. 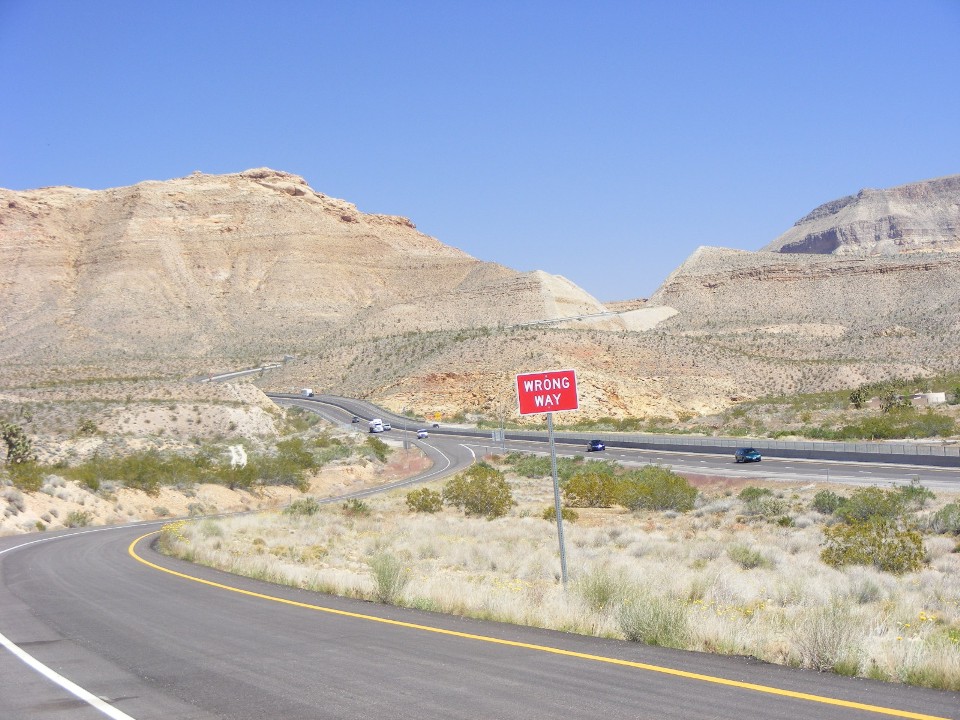 Here is the view looking east. 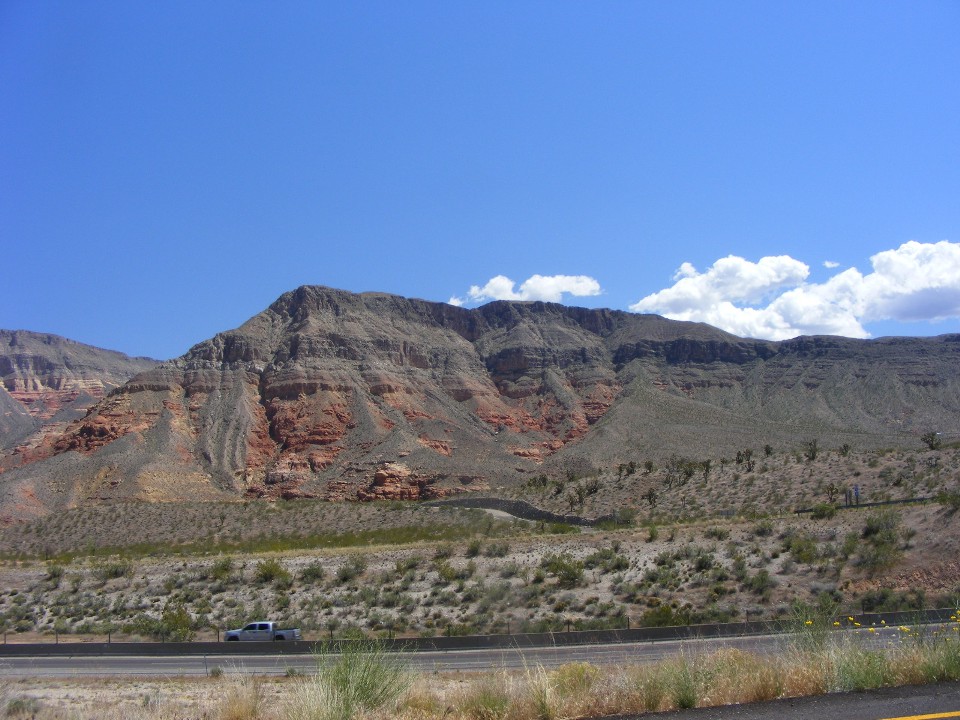 This view is looking south through the windshield as I was preparing to get back on the road to Las Vegas. 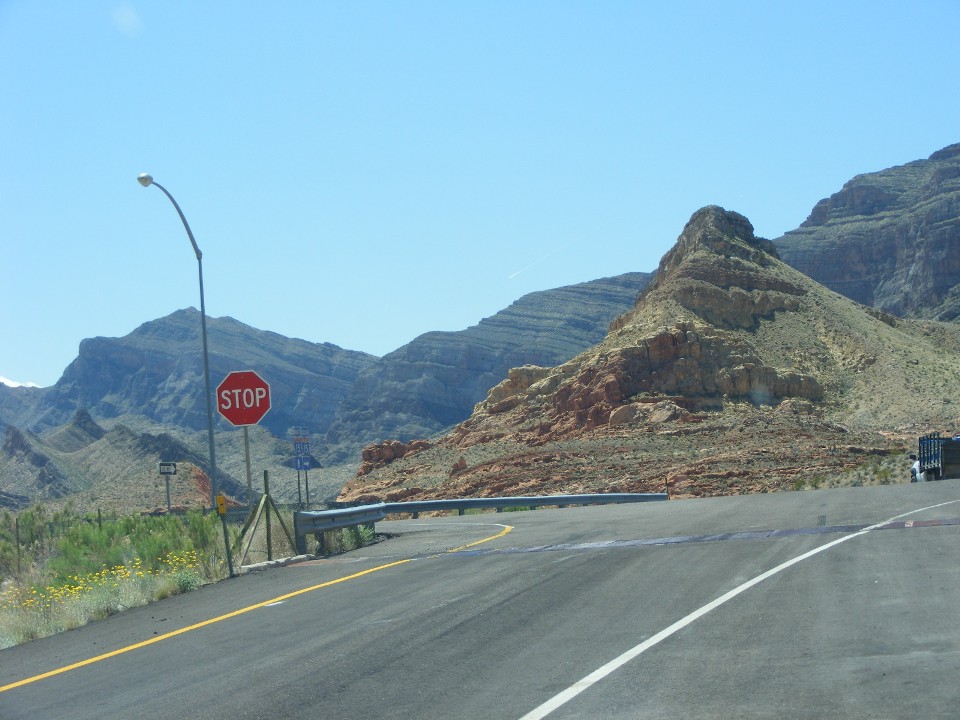 The ride back to Las Vegas was uneventful as the desert view is boring.  I had seen a truck stop with good fuel prices as I left Las Vegas Thursday afternoon.   I drove down to an Applebee's restaurant not far from the rental car return location for the McCarran Airport.  I had a good dinner before the sun went down.   I packed up the GPS and got my two bags ready for check-in at the airport.  I started to pay attention to the time both here in the Pacific Time Zone and what time it is back home.  The flight is scheduled to leave for Atlanta at 11:30 PM PST (2:30 AM Eastern Time).  I had the wheel chair routine again at Las Vegas, Atlanta, and in Melbourne when the plane arrived on Saturday morning.  It was good to get home with what little nap time I could get during the ride to Atlanta.  I took a nap at home after a light lunch on Saturday, April 13.

April 21, 2013:  Here is a wrap-up of the past week.  I did my job as usual on Monday at home with my leg still giving me trouble.  I went down to Fort Lauderdale on Tuesday to help a customer configure some equipment for his fiber optic satellite application.  I was back home by 10:30 PM.   He would not have been successful without my help as he does not understand I.P. networking.

I had a doctor's appointment on Friday morning.  The electronic X-ray showed no signs of arthritis in my left hip and no need for a hip replacement.  He examined my range of motion and said I have Piriformis Syndrome and said I should look that up to get the details and some exercises to help my condition.  He prescribed a steroid to bring down the inflammation of my Sciatic nerve and joints.  It is helping.  I go for therapy on Friday, April 26 and some follow up sessions to help with the cause of the leg problems.  It seems that sitting too much at my desk and on the airplane is the problem.  Getting up to move really helps.

Here is the news from the FAA:  The new waiver came in the mail on Monday, April 15.  I am good to go for another year and the local FAA medical examiner can provide my next waiver based on the letter of authorization that came from OKC.  The letter of authorization is good for five years with the same 12-month stress test requirements I have met last year and again this year.   Yippee!!!

And now the news from Chickamauga, Georgia:   Wendell called on Wednesday, April 17 to tell me the Champ has been sold to a guy in California.  The check has cleared and the plan is to meet in Amarillo, Texas to hand off the airplane some time soon (May 4?).