March 24, 2012:  This is the first Saturday for Spring here in Tennessee.  I was starting some spring cleaning by taking out my recycling items.  I had a couple of old computer monitors that have bit the dust and now they have been sent off for recycling.  The last stop of the two monitors was near the Chattanooga Airport.  A new FBO has opened here and I wanted to check it out.  Wilson Air Center is open for business on the opposite side of the field from the air terminal and the other FBO's.  It is a very nice facility with a young lady at the counter who looks like the actress Meg Ryan.  All the pilots know her from her role in Top Gun. 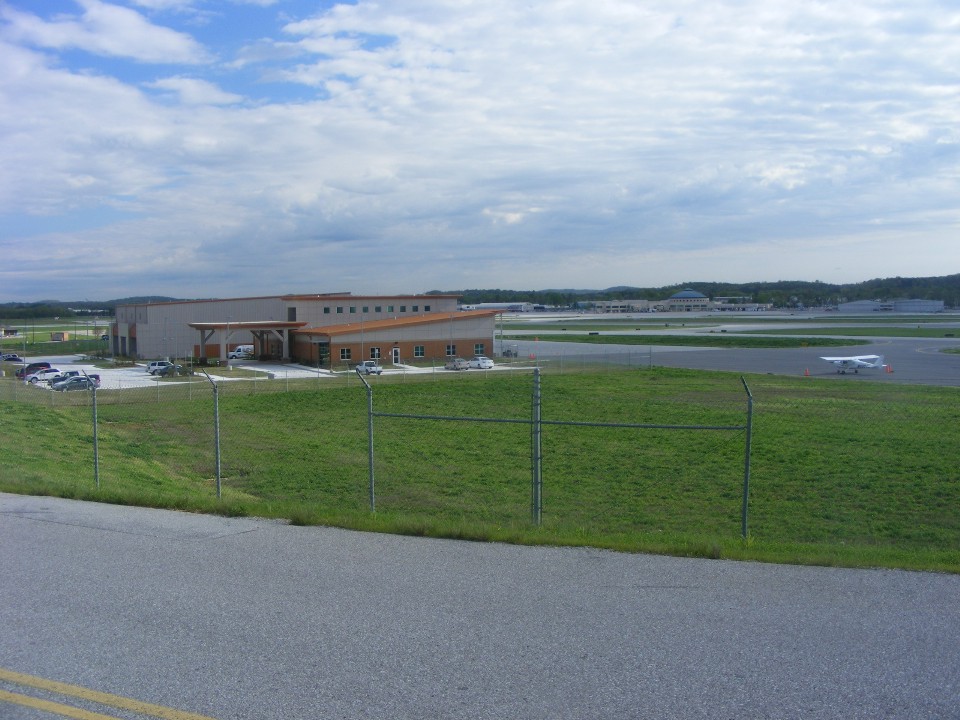 The self-service fuel is located adjacent to the fuel tanks where the service trucks for all the FBO's get their fuel.  The orange cone is at the fuel pump and hose cabinet.  The credit card terminal is there also. 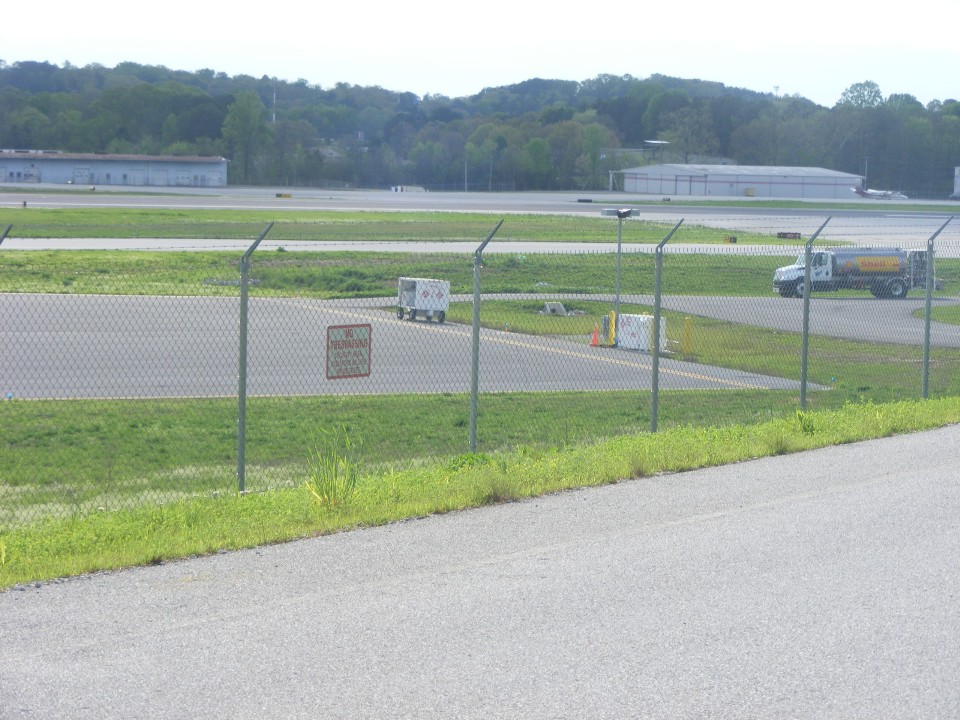 Here is the reminder that KCHA has Class C airspace.  That radar antenna is constantly rotating and provides aircraft range and location for Chattanooga Approach air traffic controllers and the airport control tower. 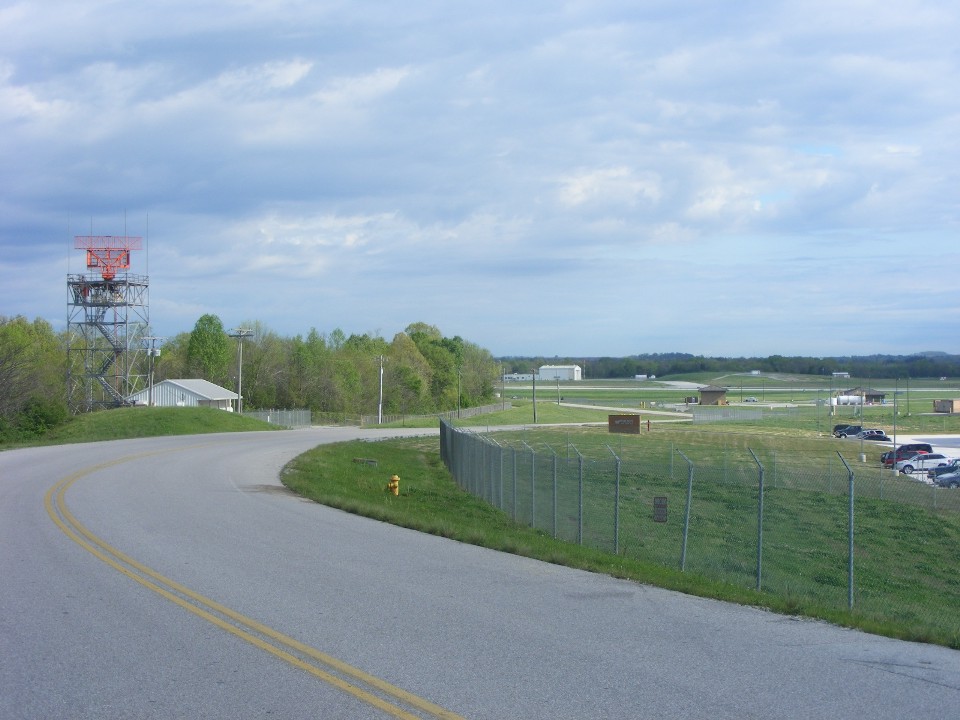 I went over to the other airport where my airplane is hangared.  I checked the air in my tires and found them in need of some additional pressure.  I talked with Wendell when I was rolling around on my cart at floor level removing wheel fairings and using the air hose.  He and Terry have been doing the annual inspection on his RV-8.

I made the short trip down to my home town of Dalton, Georgia to meet up with my oldest living cousin.  He had a copy of the family tree page from my Thorn grandparents family bible.  It shed some light on the siblings of my father.  I also got a copy of the marriage certificate for them dated in 1904.  There were some interesting things there giving me more clues about my genealogy searches from the past.

March 25, 2012:  The weather has been very good around here for a while as seen in the photos above.  I went out to the hangar this Sunday morning to check on a minor thing with the airplane.  I was surprised when I opened the door and found a flat tire on the left landing gear.  I found the tire so flat that the wheel fairing was on the floor.  I found the small hydraulic jack and used a couple of hard Styrofoam blocks and one of my pine planks to stabilize the jack under the left wing tie-down eyebolt.  I jacked up the airplane until the tire was just clearing the floor and removed the nose bowl of the wheel fairing.  I was then able to rotate the tire to bring the valve stem in reach and measured NO air pressure with my tire gauge.  I put in 35 PSI and cycled the valve stem several times.  I figured the fuel leaks stopped after I exercised the fuel drains a few times, maybe it works the same way for the air in the tires. I left the nose bowl off to check on the tire pressure later this week.  I took this photo and put away the jack, the board, and the two Styrofoam blocks.  I really have to get a pair of those blocks.  They are very light weight, but worked well to support the left wing of the airplane when the jack and wooden board was placed on them. 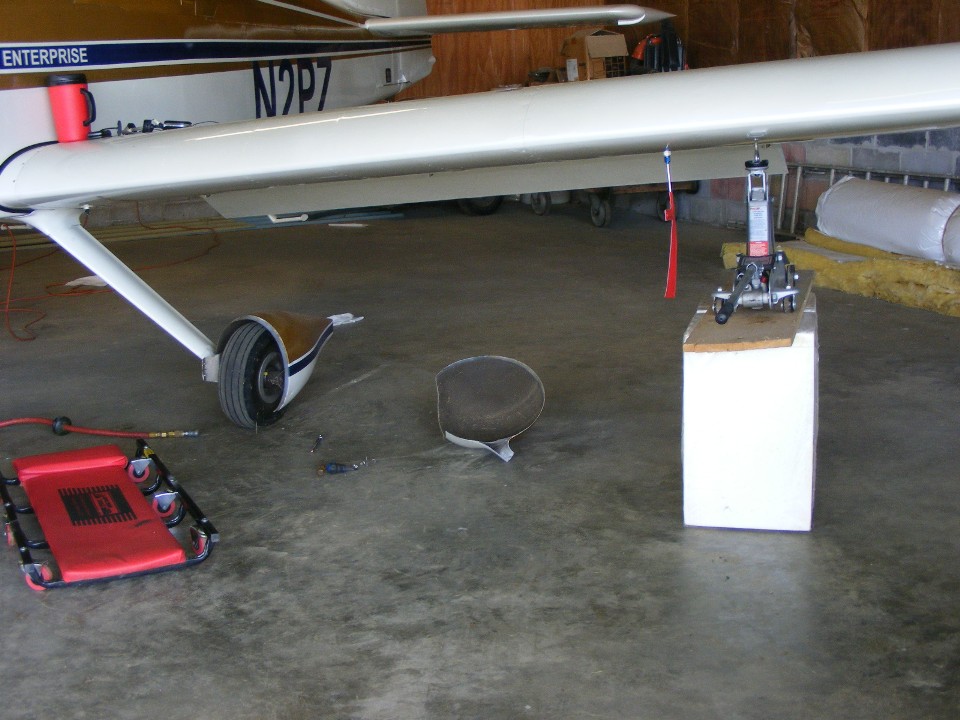 The photo above is the debut of one of TWO new RED CUPS that I recently purchased online.  There is a guy in ILLINOIS who bought the original Aladdin cup molds and is building them again.  Here is the web site link if you would like to have your very own thermal insulated cups for hot or cold beverages.  http://www.industrialtom.com/ClassicFoamMugs.html    There are a large number of color combinations in 20 oz. and 34 oz. sizes.

I mentioned in yesterday's post that Wendell was doing the annual inspection.   I took this photo while I was here today. 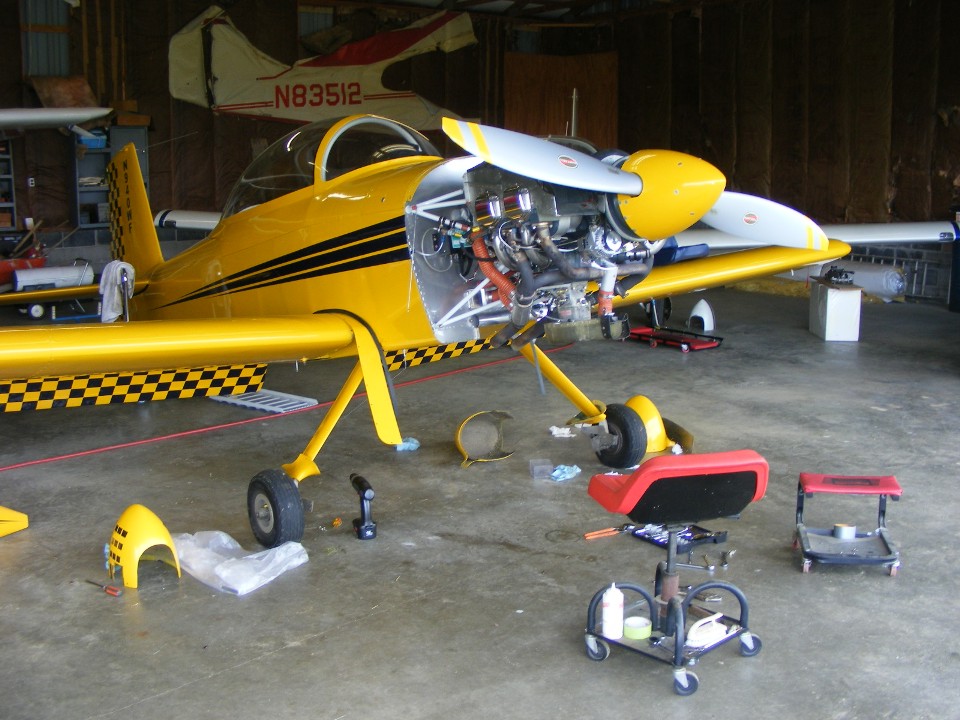 March 31, 2012:  I went out to the airport this Saturday morning and I was alone.  Wendell has not returned from the Sun-N-Fun event in Lakeland, Florida.  He and Ron flew out on Tuesday via the low-cost Allegiant Air flight to the St. Petersburg, Florida airport.  I just got off the phone with him while he was still at the event.  They will be coming home tomorrow.

April 7, 2012: The usual crew of friends were at Folks Field this morning.  I got a late start today after catching up on my sleep.   I took part in the good-natured banter of the group.  When they went to lunch, I went to the hangar and gave Enterprise a good cleaning.  The canopy was dust covered and needed to be cleaned and polished inside and out.  My thought about getting the airplane ready to fly is one way to reinforce my desire to FLY as soon as my airman medical certificate is renewed.  It has been just over three weeks since my medical records were sent to the FAA in Oklahoma City for my waiver request.

The tire pressure on the main landing gear is holding steady.  My theory about lack of activity on things like valve stems and fuel drains is true.  There are no more fuel stains on the hangar floor.  Speaking of fuel stains, Wendell has completed his annual inspection of the RV-8, which included replacing the gaskets on the round inspection plate of both of the fuel tanks where the fuel sensor is mounted.

May 5, 2012:  Another Saturday morning session with the usual guys at the air strip.  Today was a bit different as Wendell wanted to get some photos of his Aeronca Champ.  I took some photos on the ramp and I brought home some other things about this very special custom-restored airplane that was featured on the cover of the EAA Sport Aviation magazine for September 1996.  The details are on THIS NEW PAGE dedicated to the sale of this beautiful classic airplane!

As for the other news this week:  The FAA sent me a letter saying they needed one more document.  The interpretive report for the stress test I had on March 1, 2012 was the only thing not in the filing papers.  I went over to the hospital where I had the stress test and got the needed document yesterday afternoon.  I stopped by my aviation medical examiner to verify I had the correct document the FAA wanted.  He agreed and made copies for my file.  He then put the documents in the reply envelope from the FAA and sealed it.  I took it to the post office and sent it on its way to Oklahoma City.

May 20, 2012:  I spent this weekend in May traveling to Pennsylvania and back when I should have been packing my household goods for the upcoming move to Florida.  About 60 people who have worked for Jerrold Electronics / GI / Motorola got together for a reunion in a hotel in King of Prussia, Pennsylvania on Saturday, May 19, 2012.  Not only did I get a chance to see some old friends, but I also had a chance to see my son and his family in nearby York, PA.   I have photos to post from this weekend, but they will have to wait a while until I get settled after the move to Florida.  ( This paragraph and the postings below about the move were published on June 3, 2012. )

May 26, 2012:  Moving Day for me -- back to Florida.  I lived in Florida from March 1977 until January 2001.  I changed jobs in 2001 and moved back to my home turf where I grew up.  In the past 11 years, I have made new friends and traveled to a lot of places.  And of course, the heart of this web site is all about the airplane I built in my garage here in Tennessee.  Loading of the moving van was completed today  with the very able and much-needed assistance of my youngest son Marshall.  He came up from his home near Kennesaw, Georgia to help me pack up the truck and drive with me down to Florida.  I could not have done this by myself as I have in the past.  This of course was a Saturday morning and the usual guys were at the airport.  A few of them came out to offer help as we loaded up my work bench, tools, and drill press/bench grinder table.  My airplane will remain here for a few more weeks until the new location in Florida is ready and when the weather is good for the four-hour flight. 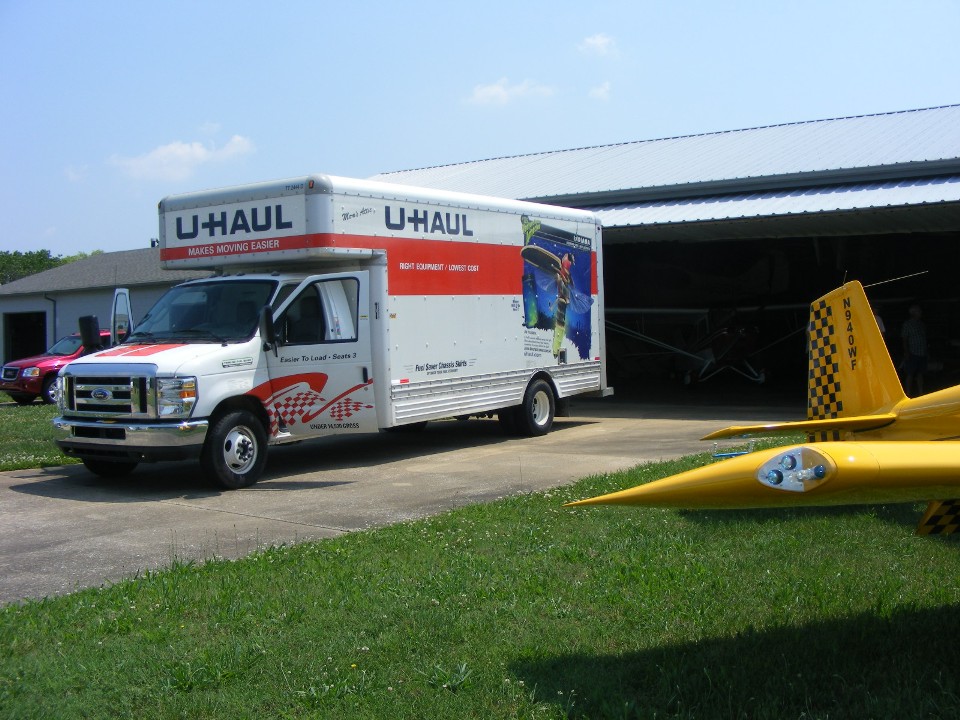 The actual departure from the Chattanooga area was about 6:25 PM after all the reamaining boxes were packed back at the "airplane factory" and the auto transport trailer was connected.  The old Caddy was loaded aboard and dragged her belly as she went up the ramps at the back of the trailer.  I took the photo below late Sunday afternoon in Melbourne, Florida on May 27, 2012 after removing the Caddy from the trailer.  The truck was still loaded when the photo below was taken.  Note how the trailer is lower in the front than in the rear.  That condition made the extended loading ramps in the rear of the trailer steeper and was why the Caddy drug her belly getting on and off the trailer.  If there ever is a next time to move the car on this type of trailer, I will be sure to find a good location to park the trailer in a "low spot" on a parking lot where the rear loading ramps will have less of an inclined angle with the deck of the trailer.  The truck was unloaded on Monday May 28 -- the Memorial Day holiday in the USA.  I chose this long holiday weekend for the move since I would have more time off from my day job. 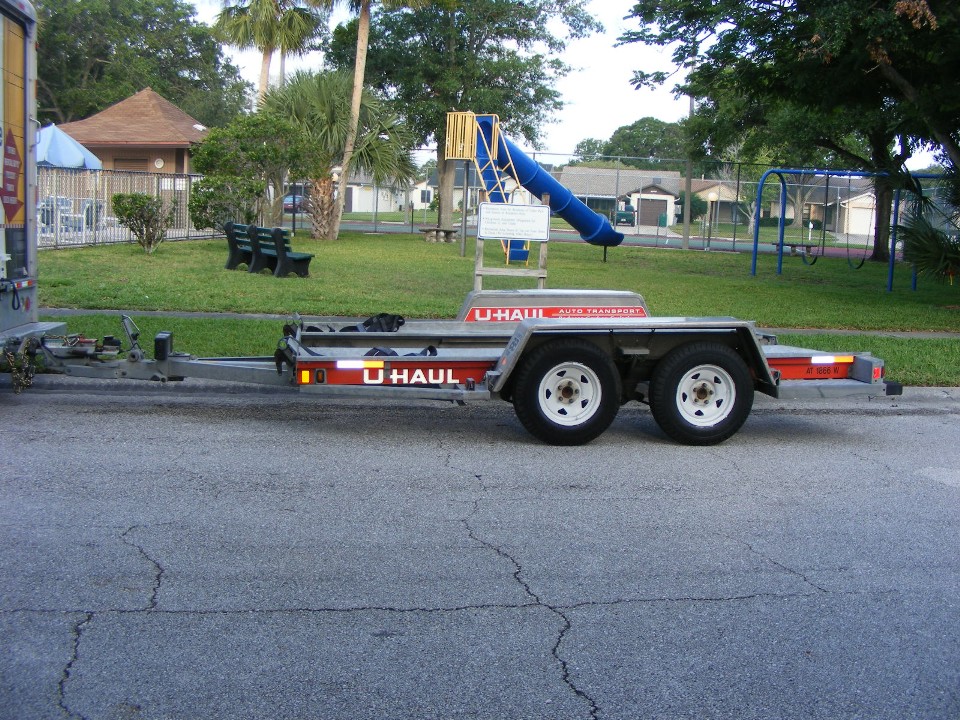 It is Sunday June 3, 2012 as I post this page showing the beginning of the next phase of my life.  In the past few days, I have visited the Rockledge Airport where the "Enterprise" will be sheltered when the hangar upgrade there is completed.  I checked in with the Allstate insurance agent that was recommended by my agent in Tennessee.  The new agent knows both the agents in the office back home very well.  She quickly set up my Florida auto insurance, cancelled my Tennessee auto insurance, and provided me with the documents I need to get my Florida driver's license and auto tag.  I will get those two items tomorrow when the county clerk's office opens at 8:30 AM.  I went to the storage facility where my household goods are located and very quickly found my birth certificate in my office file cabinet.  I was glad I put that roll-around office furniture near the door.   Things have changed in Florida since 9-11 to get a driver's license, etc.  I have all the necessary documents ready for tomorrow.

I also visited my primary care physician I have down here from last year.   I showed her my recent documents from my stress test and blood work from March 2012.  I had discovered an old EKG from 2003 when I was packing up for the move.   She was amazed at how it matched my most recent traces.  I will give fasting blood samples for lab tests at 7 AM on Monday morning to check on my current blood chemistry.  I have also scheduled an appointment with my Florida cardiologist for next Friday morning.  My first visit with him was in December 2011.  The lessons learned last year on my health have changed my life and should make the next 20 or 30 years enjoyable.

As for the FAA medical paperwork, I confirmed about two weeks ago that my supplemental documents were received and my medical waiver certificate should be coming soon.