October 2, 2011:  This weekend has seen cool temperatures down into the 40's here in the Chattanooga area.  I have switched off the air conditioner here in the townhouse.  The Smoky Mountains are showing some fall colors in the forests.  The weather is absolutely beautiful due to the cold front that passed through here yesterday.  I will get out of the house today to get some fresh air and take a short walk on a nearby mountain.   I should have some photos to post this evening from Signal Mountain.  It has most of the local television and FM radio transmitters on the top and has a good view of the city and Moccasin Bend on the Tennessee River.

I will probably get to the hangar later today to clean the wings and the fuselage of dust and dirt.  There have not been any Saturday hangar meetings since Wendell has been away on a vacation with his wife in his motor home.  I did see Wendell at the heart institute when I went for my one-hour physical rehab sessions this past Wednesday and Friday mornings.  He was not home on Saturday morning when I stopped by to check the battery minder and turned on the avionics master switch to confirm the battery voltage was in the normal range.

Here are a couple of photos taken from Signal Mountain.  Lookout Mountain and the Moccasin Bend portion of the Tennessee River dominate the view looking south. 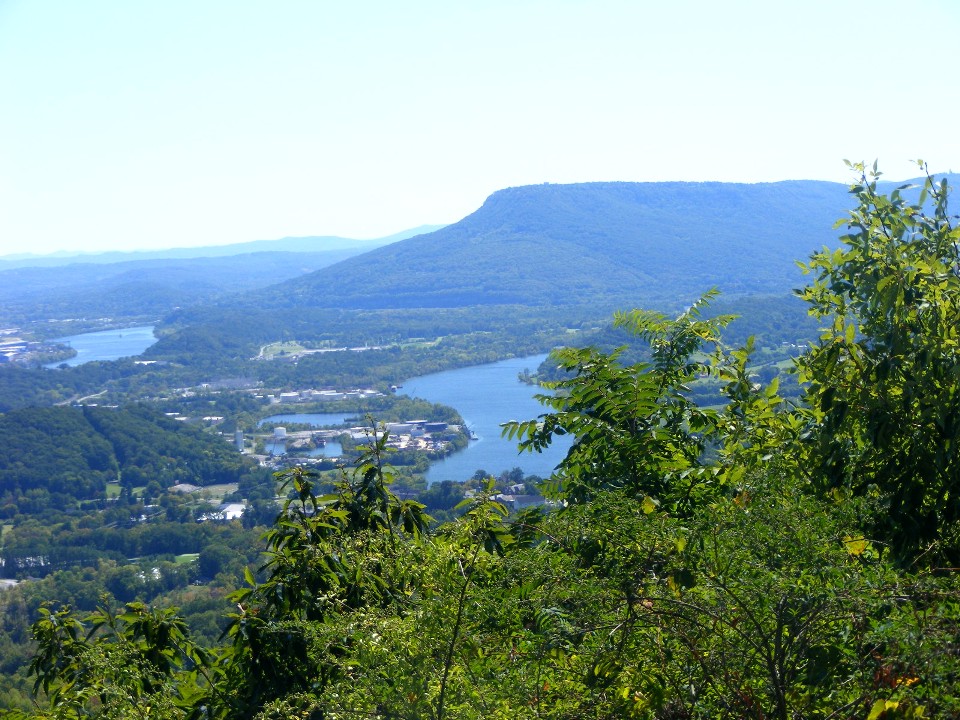 The Chickamauga Dam is northeast of the city with its hydroelectric power plant and locks providing access upstream to Knoxville. 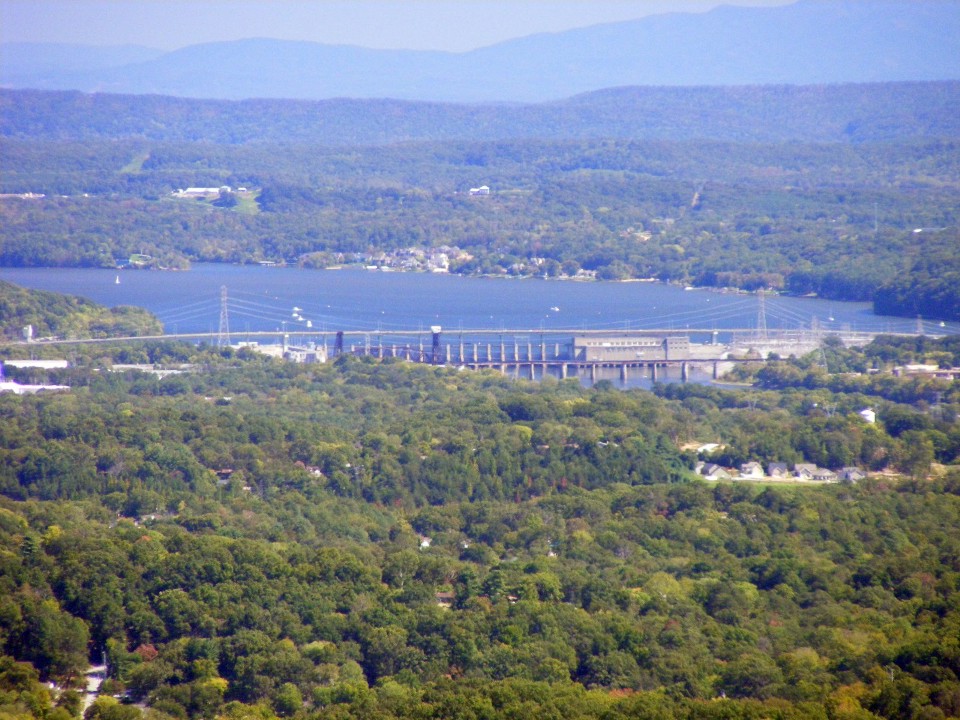 The Sequoyah nuclear power plant is upstream on the banks of Chickamauga Lake.   The image below is taken from 16 miles away at Wilder Point on Signal Mountain.   It appears that only one of the reactors is online this day. 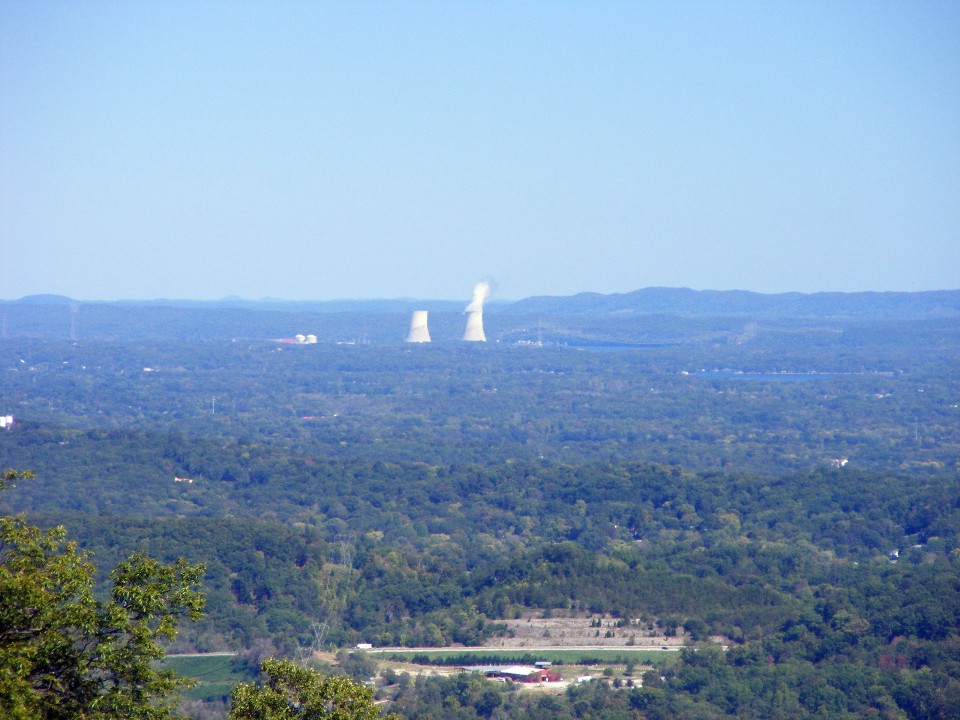 I went for a ride into the Sequatchie Valley west of Signal Mountain.  I went by the Matthews glider port but did not stop since I did not see any activity there.   I came back to Chattanooga on a route I have never traveled before.  I went by the hangar before heading home and found this dust and debris on the airplane.    I gave it a good cleaning before leaving. 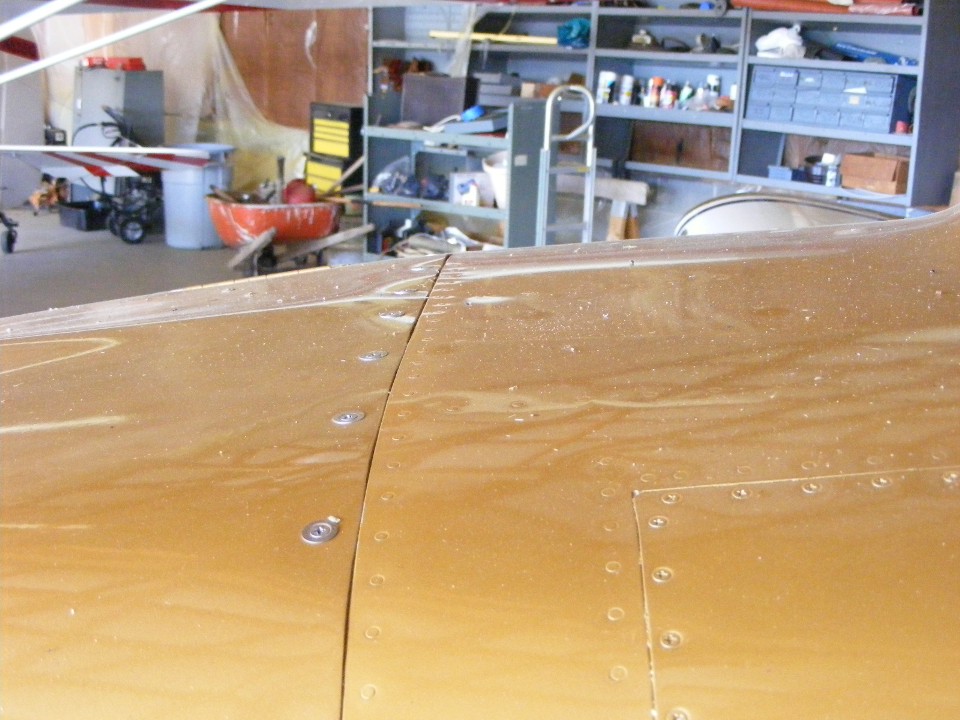 The dust on the floor around the tow bar and the cobwebs tell a story of a grounded airplane and pilot. 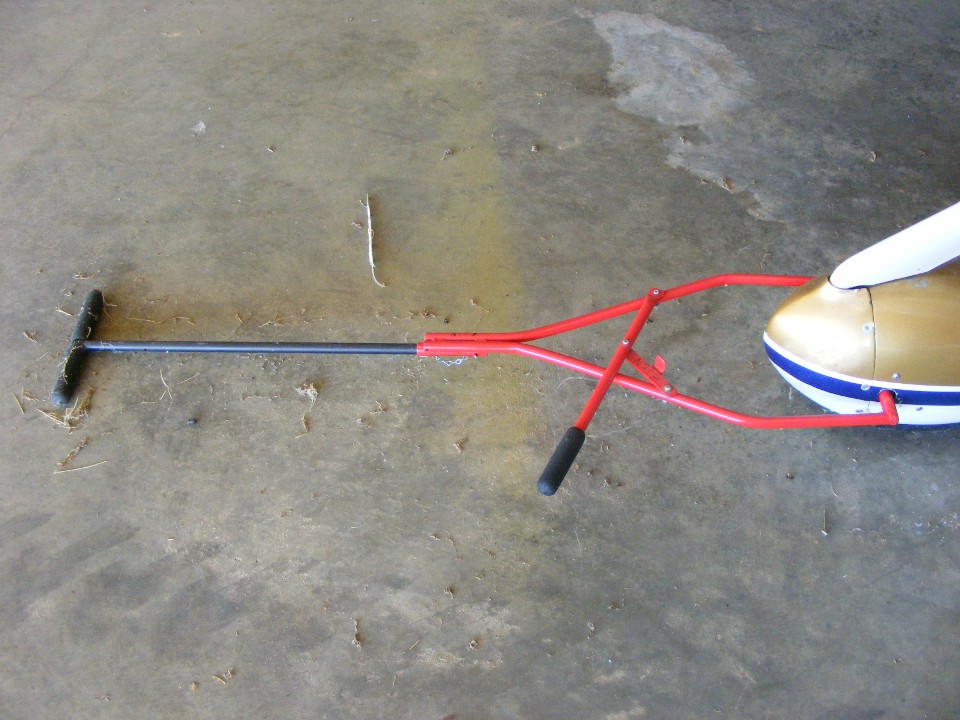 Clean again until next time.  Pledge works very well to shine my airplane. 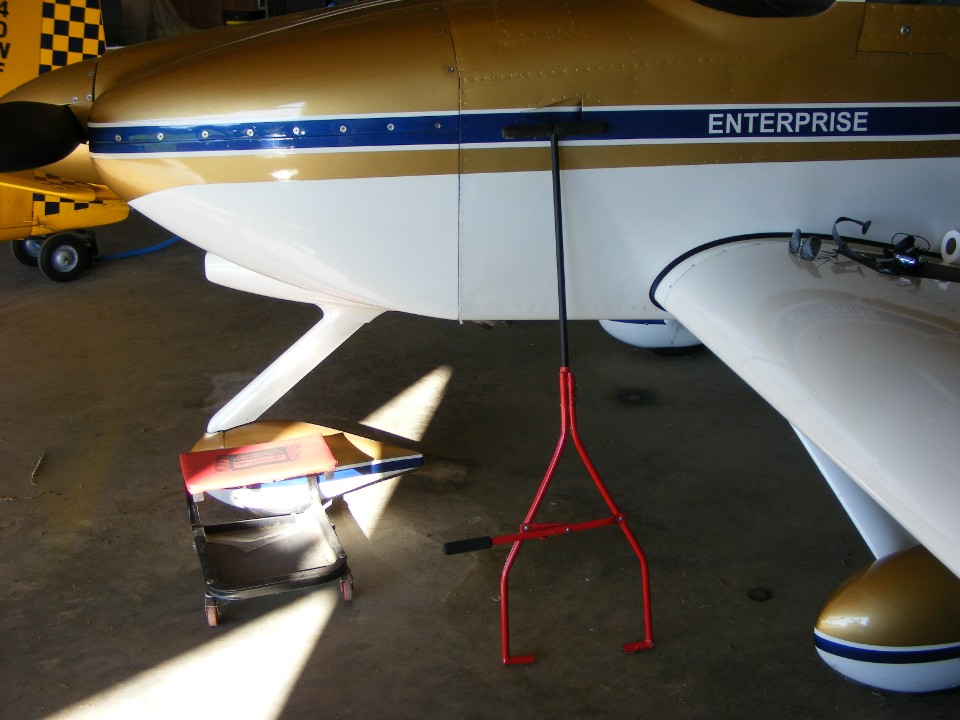 Editors note:  My apology to my regular readers for only doing minor updates to this web site the past few months.  I spent much of today (March 4, 2012) processing photos that are dated from October 8, 2011 to March 4, 2012.  As a result, I have added two photos below and the text entries from the bottom of this page have moved to PAGE 353.  What I am doing today is adding in many of the 181 photos I have taken since September 8 to these pages and my family pages as appropriate.  I have added new text below with the photos added to this page and those new pages that follow.

October 8, 2011: I went by Wendell's airport again for the usual Saturday morning bull session with the guys.  Our good friend Rich Nadig flew his Harmon Rocket (modified RV-4) from the Collegedale Airport.   Wendell always comes out to greet arriving pilots. 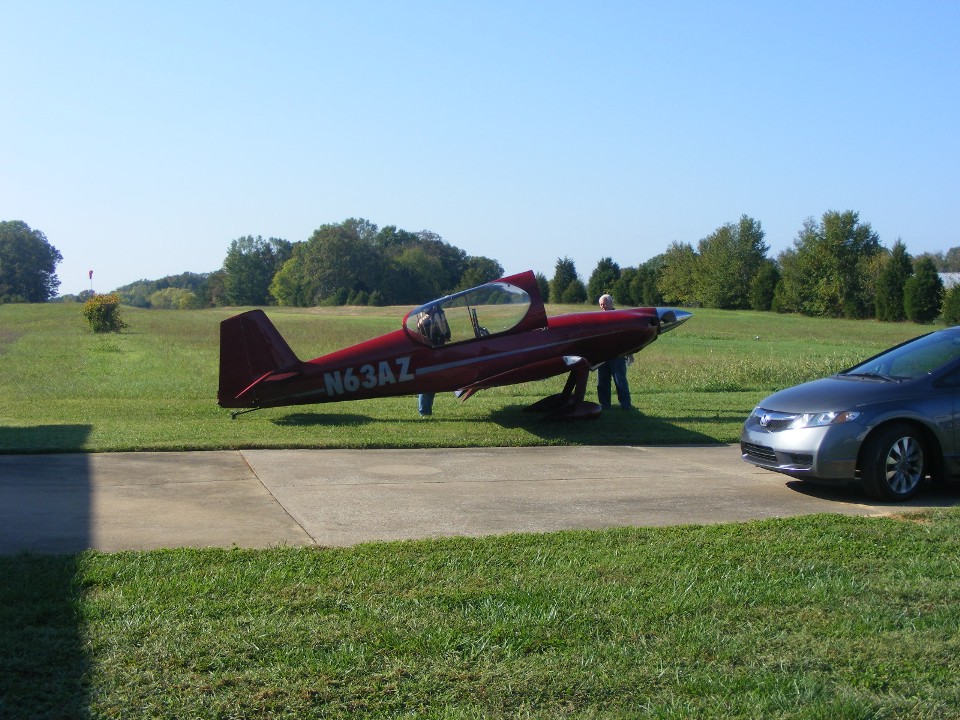 October 27, 2012:  I attended my first trade show since the one in Orlando on June 15, 2011 when I had my cardiac arrest and missed out on two conventions in Florida in consecutive weeks.  I traveled part of the way down to New Orleans on Monday, October 24th.  I spent the night at the home of an old friend of mine who was also in the cable television industry.   We caught up on old times and my recent health issues.  He has also survived a cardiac event and we compared notes of course.  He insisted I see his new sail boat on the way to New Orleans.  He was in the US Navy in the mid-1960's and is at home on the water.  He owned power boats of progressively bigger sizes over the years, but this new one is big enough that it stays in the water.  It is docked at the harbor in Long Beach, Mississippi on the Gulf of Mexico.  The boat is 52 feet long and has two bedrooms.  We had lunch at a restaurant dockside before I finished the ride to New Orleans, less than one hour away.

This photo is taken inside the convention center in New Orleans.  I have my company demo equipment set up in the booth of one of our "friends" just as I did last year in Las Vegas.  The current red cup and the computer mark the table I am using.  This photo was taken on the last day of the Telco TV trade show. 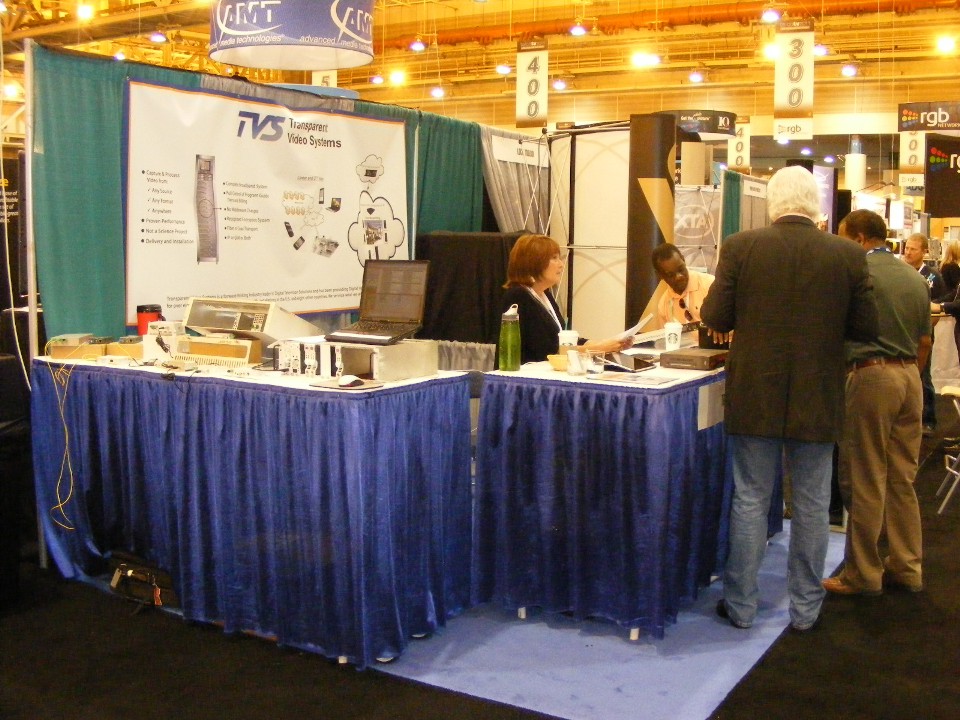