October 22, 2010: My day job takes me to some convention halls for industry trade shows.  This one in New Orleans this year is the SCTE Expo for the cable telecommunications industry -- cable TV and all the trimmings, etc.  This is where the industry goes shopping for the next big thing to bring you MTV, CNN, Sci-Fi networks, and more.  This is the booth of one of our distributors with a couple of my products indicated by my yellow arrows. 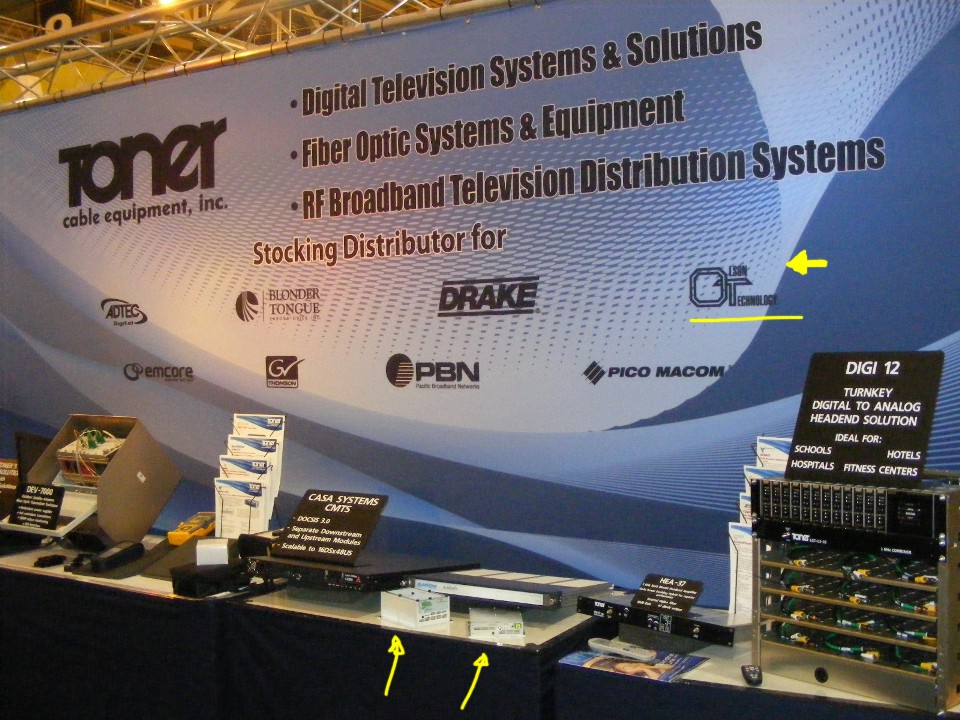 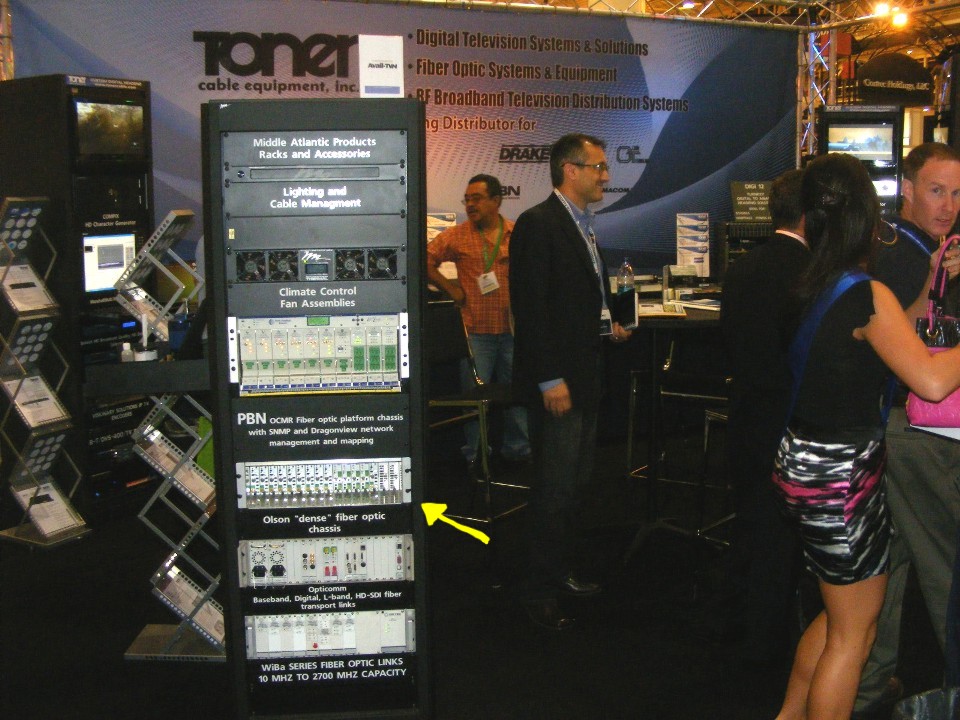 For those of you who have seen my Technical Articles Section of this web site, I indicated my previous affiliation with Quality RF Services, Inc. AKA QRF in the period from 1994 to 2002.  QRF was purchased by ATX and still exists as a division of the company.  The QRF name and the company web site I created for them is gone, but many of the products still exist along with some new ones seen here.  Next time you drive down your street, look for metal, weather tight boxes similar to the ones on the table below when you look up on the second set of wires from the bottom of the telephone and power poles.  That is where CATV networks are located as the utility poles come your street. 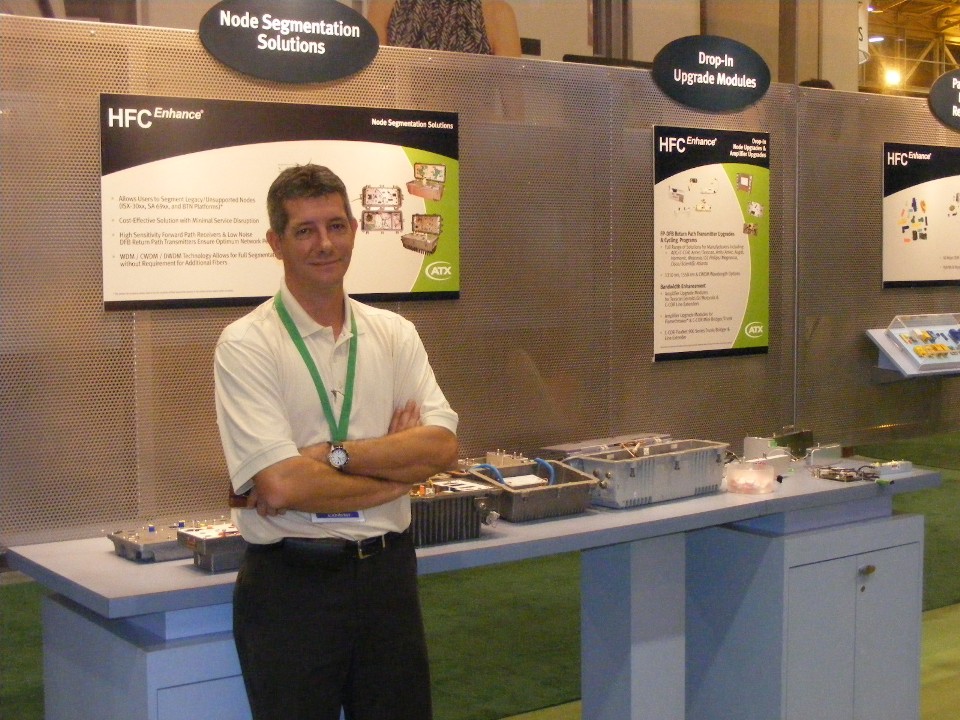 The inside of those boxes may look similar to these.  The modules connected via yellow fiber optic cables with the green connectors are the part of the network where I spend my time on my day job nowadays. 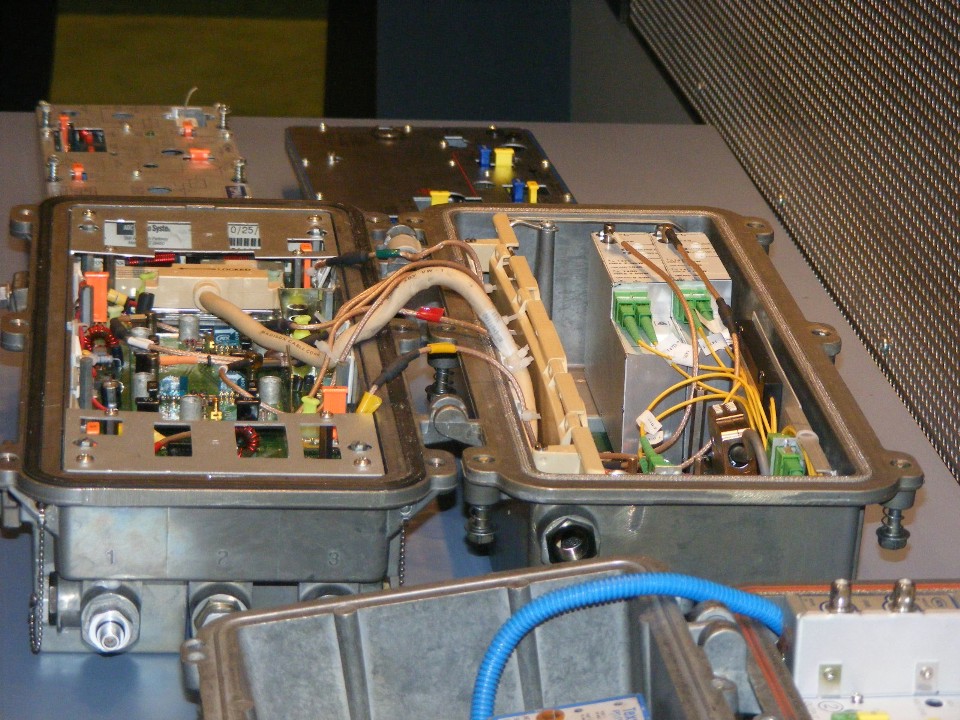 Those fiber optic modules come in different shapes and sizes to fit different OEM fiber optic nodes; the boxes seen above and on the left end of the table in the photo below.  They all do the same thing, insure the cable modems for the internet, and the cable box that you use to watch "digital cable channels" all work flawlessly in your home.  If you have telephone service from your cable TV company, those signals also pass through these fiber optic modules. 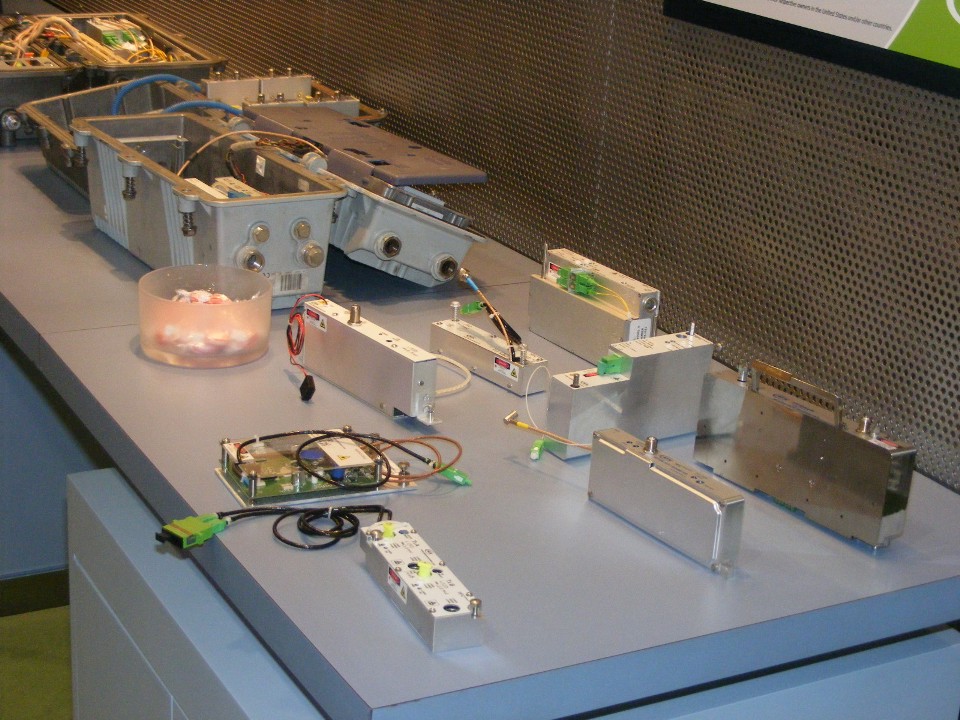 The three photos above show some of the equipment used in the neighborhoods on cable television networks.  This photo shows some of the equipment that is used in the cable "headend" where a cable system starts to feed all the neighborhoods with entertainment, internet, and phone service.  Some of those "Q-Series" products have been around since I worked with them in Florida and when I was building my airplane in 2002. 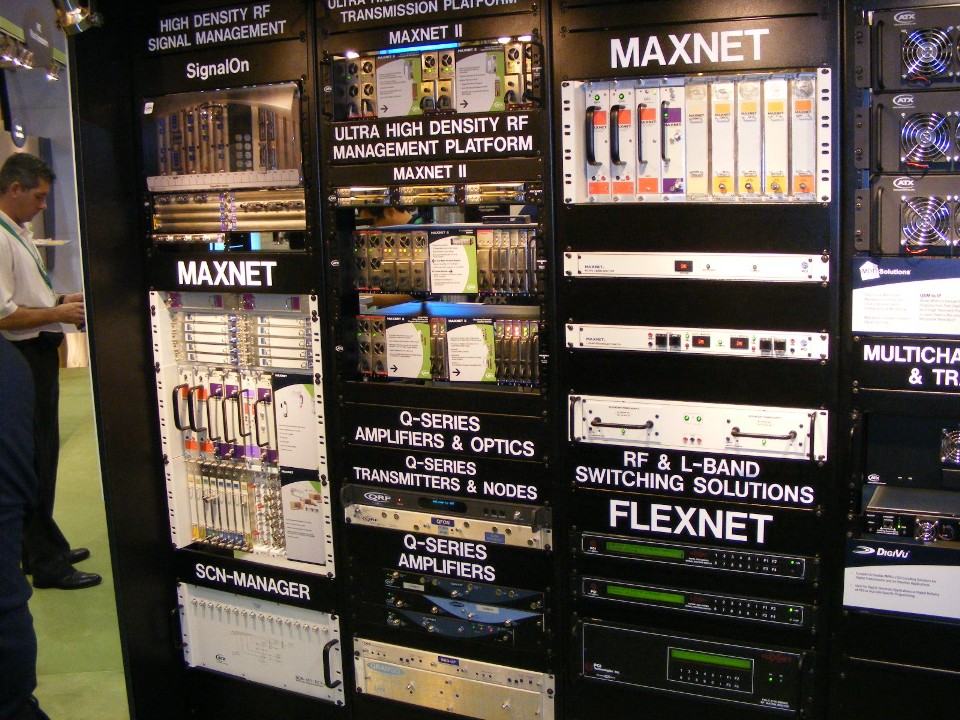 This trip to New Orleans was not a tourist visit, so there are no pictures of the Bed & Breakfast lodging I had, nor any of the sights in the city or the Garden District.  You can find plenty of those on the web.

October 22, 2010:   I left New Orleans on this Friday afternoon and drove along the Mississippi Gulf Coast on US route 90.  I wanted to see the areas affected by Hurricane Katrina in 2005 and by Hurricane Camille in 1969.  They were both category FIVE hurricanes and the results are what you see here.  This is the view of the Gulf of Mexico from a former home site on Beach Boulevard in Waveland, Mississippi.  The house was set back a "safe distance" from the beach.  In normal weather, that was true, but not when a category FIVE hurricane comes ashore clearing everything in its path. 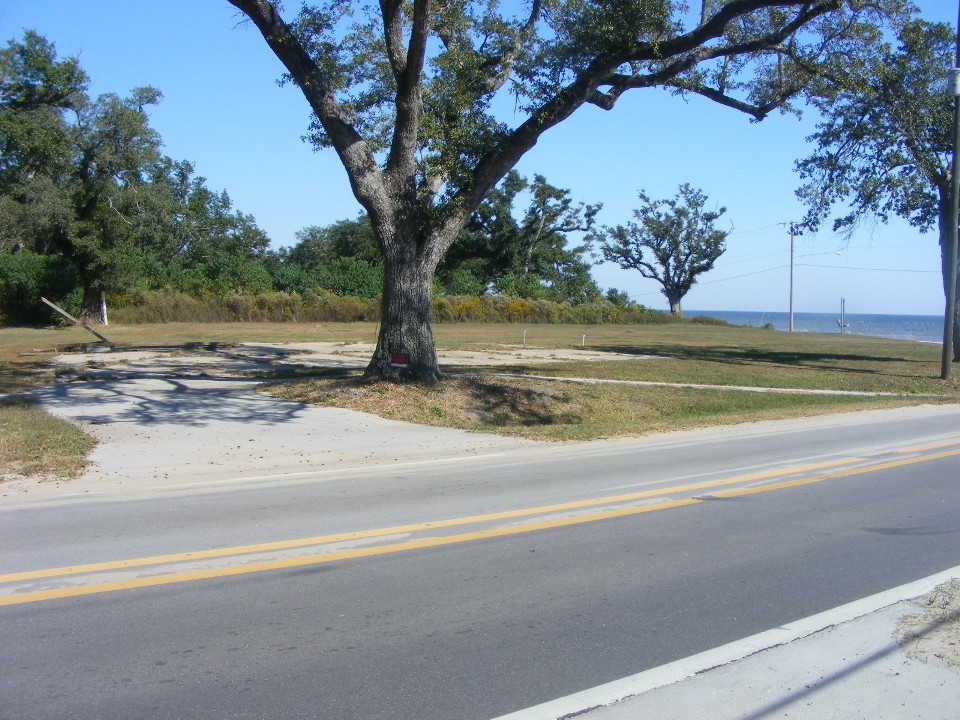 This swing is in the photo seen above.  It represents part of what was here when people lived here. 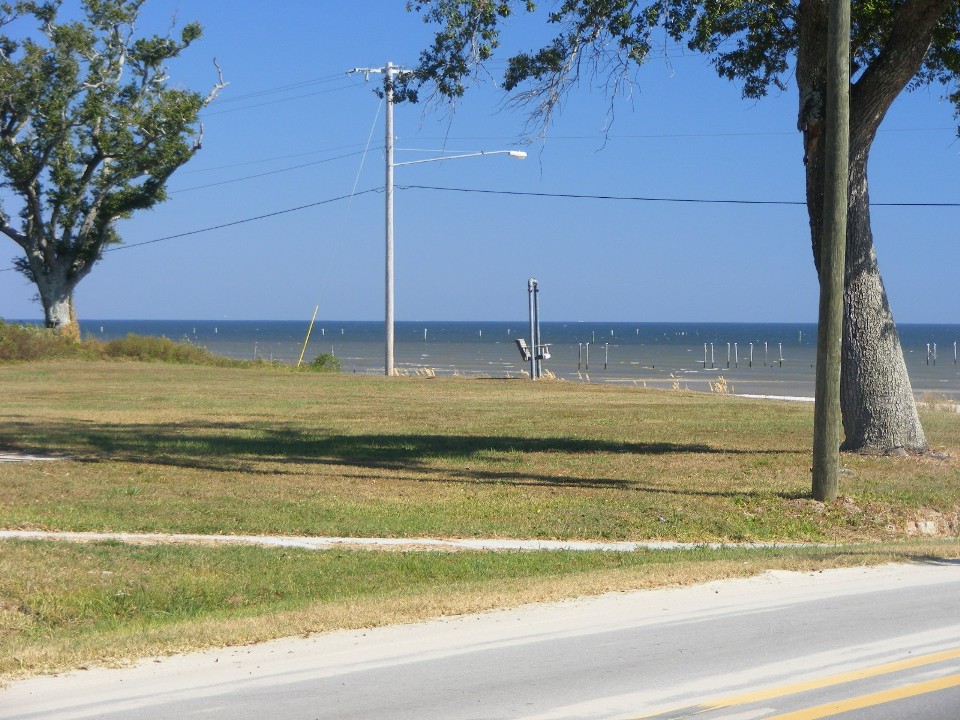 Nothing remains except the concrete foundations of the homes that were here.   The tidal surge and winds cleared them away completely. 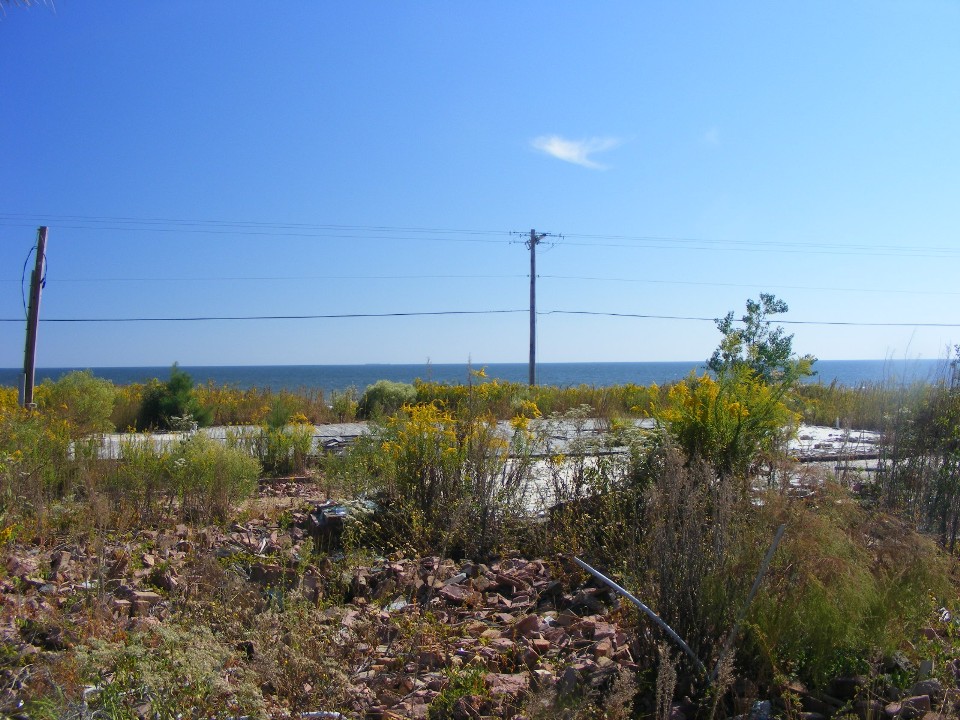 Looking west, the remaining rubble of this home is here, while a neighbor has rebuilt with the home up on concrete pilings to all a tidal surge to pass beneath the home.  When I lived in Florida, the house I built in 1993 was built to new standards after Hurricane Andrew leveled many homes in Dade County near Miami.  These homes are built to a similar standard to withstand hurricane force homes. 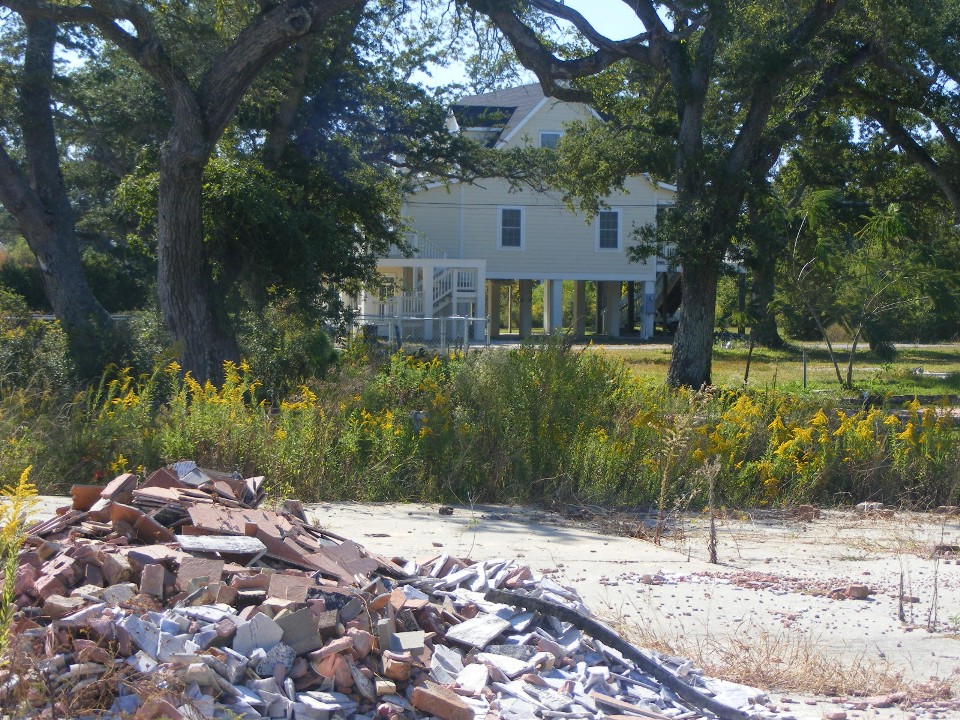 Looking north from the photo location above, the next house and garage were also swept away by the storm surge. 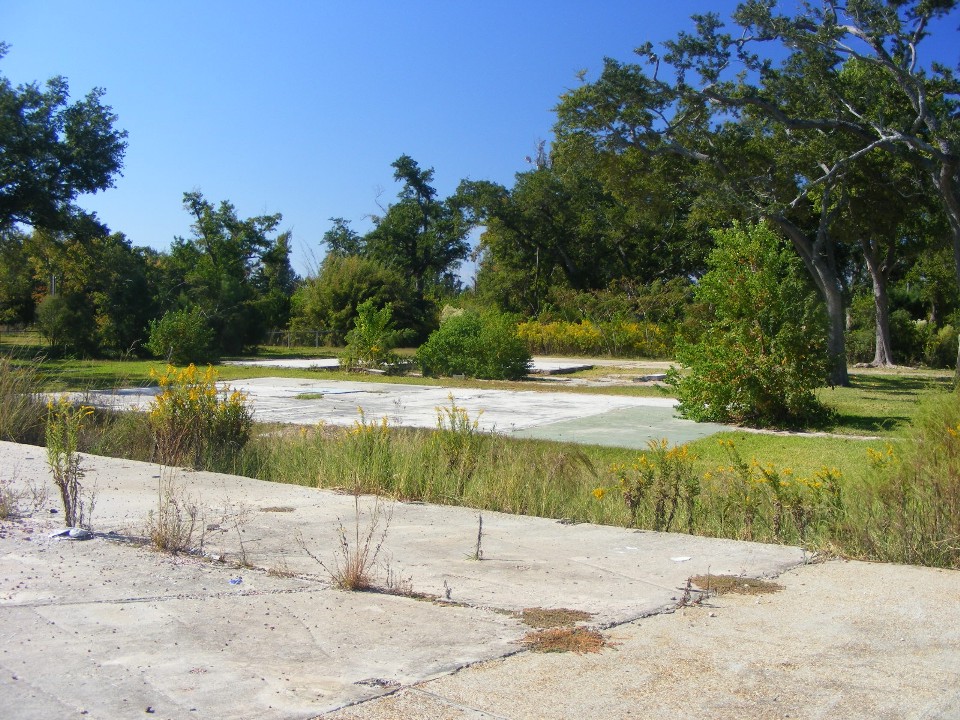