September 2, 2010: This weekend is the last hurrah for Summer 2010.  Some folks are dodging Hurricane Earl along the North Carolina coast and points north and east to Canada.  The prediction for Chattanooga tomorrow is 92 and scattered thunderstorms.  My airplane is ready to fly, but I have other travels that require my car and my day job equipment.  I will be in Florida next week calling on a few clients and showing some new electronic and fiber optic CATV equipment.

My 2002 HP G85 All-in-One printer, fax, scanner stopped scanning with an error reported on the control panel.  I did the usual Google search and found some others had similar problems.  I found out how to disassemble the unit as far as needed, cleaned the usual items that had solved the problems for others, but still had the error message.  I read more about the error and discovered some folks had electronic issues on the circuit board where the optical scanning chip is located.  That was where my problem was found. 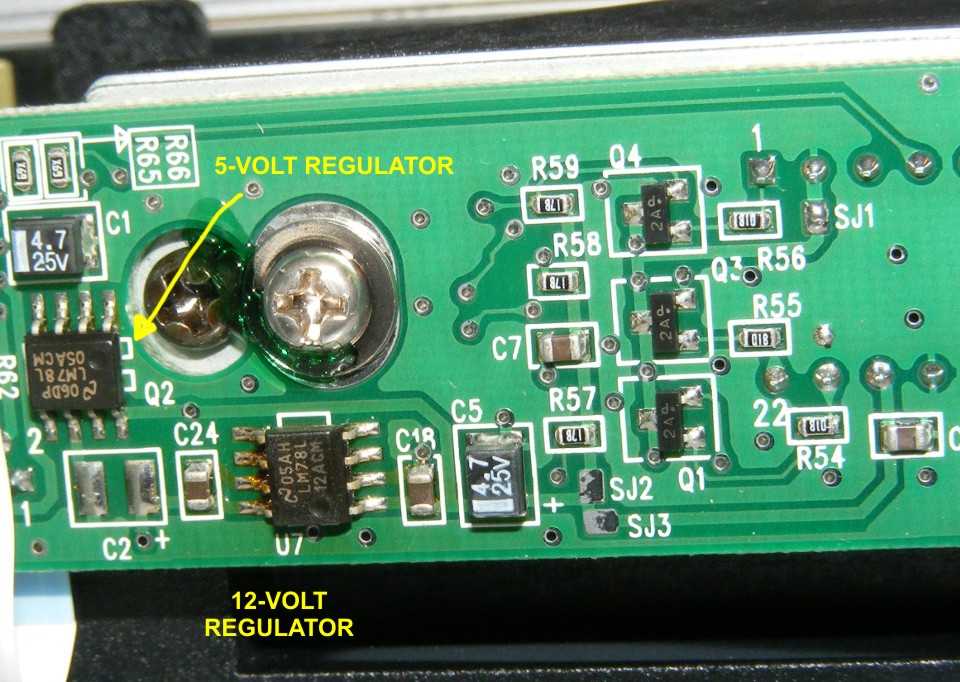 The photo above shows the way the circuit board looked when I removed the dust cover from the scanner assembly that moves along under the document glass.  I can see that the LM78L12ACM voltage regulator at U7 had been replaced as part of a rework at the factory.  The technician did not clean the flux from the leads with alcohol after replacing the original regulator that had been installed by an automated pick-and-place machine before the board went through an infrared soldering station on the production line.  The part is a surface-mount version of a popular voltage regulator that was used in satellite receivers I installed from 1977 to 1989 in one of my "previous-life" vocations.

The article I read online had one guy who talked about C24 being bad.  He replaced it and all was good for him.  I checked that one and found the 18 volts DC from the main power input to the printer was there.  I checked the output from the 12-volt regulator and found no voltage.  That meant that something on the 12-volt side circuitry was shorted to ground.  These voltage regulators have over-current protection built into them.  They usually survive a shorted output because of that feature.  I started tracing the path of the 12 volt trace and checked C18 by removing it and testing it with my digital volt-ohm-meter (VOM). C18 was not shorted out.  The next thing on the path is the C5 4.7 microfarad, 25-volt rated electrolytic capacitor, and it was found to be OK when I lifted one end of it from the board and checked it with the meter.  When I got to C7, the short circuit on the 12-volt trace was gone after I removed it.  The 12-volt trace was now reading nearly 800 ohms to ground.  I cleaned the solder off the capacitor I had removed at the C7 location and checked it with my VOM and found it was the shorted component.  Here is how the board looked when I had found the problem and already soldered C5 back in its location. 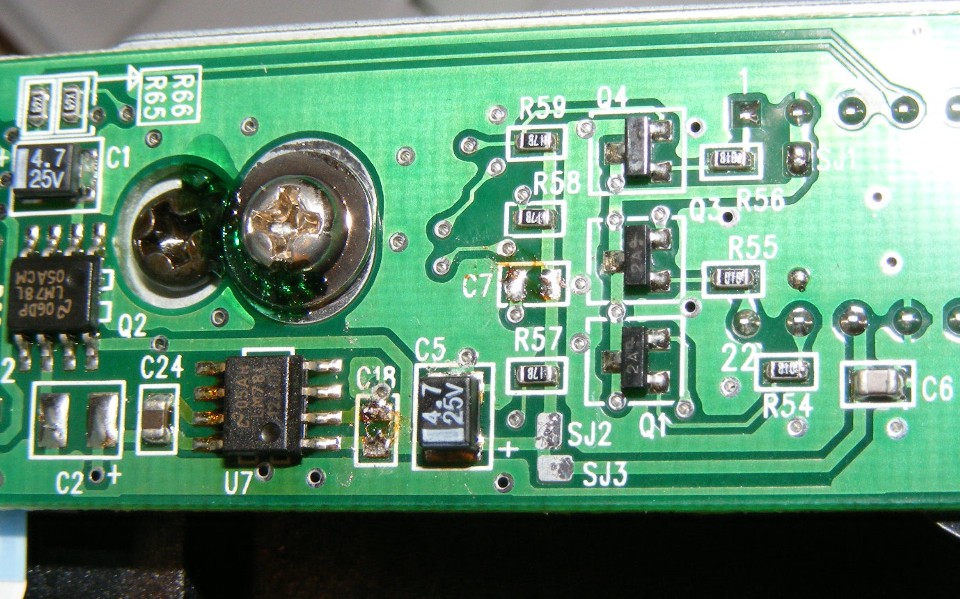 I used the 0.01 microfarad capacitor removed from the C18 location to fill the C7 slot.  I then went down to my old electronics parts bin to find a suitable capacitor with the same value to tack into the circuit at the C18 location.  That capacitor and the one located at C24 keep the voltage regulator from oscillating.  I remember when that problem was first identified back in the 1970's.  It looks crude, but it works just fine.  The printer has been on most of the day with no more error messages.  The 12-volt and 5-volt regulators work just fine.  Folks with no electronic skills have paid over $100 to replace the entire scanner assembly.  Yeah, I spent some time doing the research and the repair, but it was good to stir up the brain cells and use my talents from my earlier jobs.  Electronics is my day job, selling, being the factory answer man, and designing fiber optic systems. 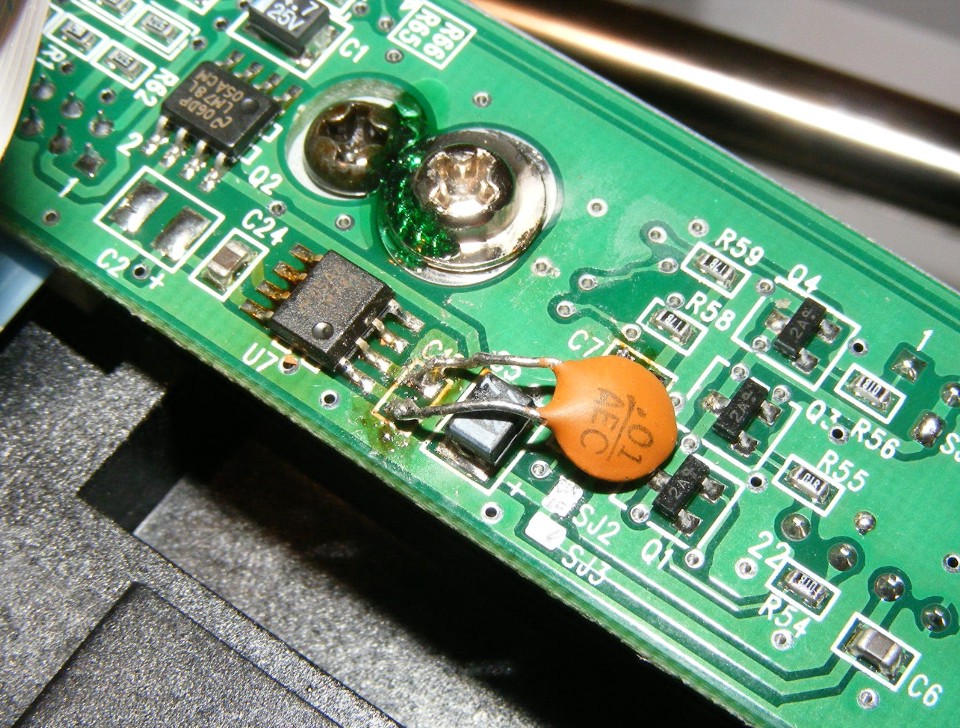 I called the JVC repair center to confirm my camcorder is there and in the queue for repair.  I asked the lady to make sure it does not ship back to my home until I return.  I will call them a few days before my return to let the ship it via UPS to the house.  The mail is on hold.  The bugs are washed off the windshield, the oil checked, and tires are up to normal pressure.  The old Caddy is ready for another road trip!

Tomorrow is a travel day.  The laundry is running downstairs and it almost bed time.  I will keep you posted if anything interesting happens.  For now, I am out of GEEK electronic repair mode and back in the wandering traveler mode in the morning.

September 12, 2010: I made the trip to Florida on Friday, September 3rd as planned with no problems.  I got some rest over the Labor Day weekend and made two short trips as part of my day job to call on clients in Florida during the shortened holiday week.  This is Sunday evening as I publish this update to the web site.  The news today is about putting TWO VIDEOS online from the Oshkosh 2010 trip.  You can find the movies linked from the Oshkosh 2010 MENU PAGE.  Right click on the links and download the files to your hard drive to play them.

UPDATE November 1, 2010: It has been a busy number of weeks with not much time to edit photos and publish web pages.   In the weeks since the posting above, my schedule has been full of day job tasks and travels.  That last posting was during a 3-week trip to Florida.  I returned home for one week and managed to go to a nearby fly-in on Saturday October 2nd, before heading out later that day in a rental car on another company trip to Pennsylvania for a few days.  I had some time on that trip to visit my son and his family.  My grand daughters are growing taller.

The week after that was a short week due to the Columbus Day federal holiday.   At the end of that week, the Dalton High School class of 1965 had our 45-year class reunion.  I was busy with that on the weekend of October 15-16.  When Monday October 18 arrived, another trip for the company to a major trade show in New Orleans dominated my time all week.  I returned home on Saturday, October 23rd.

On Saturday, October 30, I went on a driving tour within about 100 miles of Chattanooga to see some fall colors.  A stop at Lynchburg, Tennessee was in order to find sources of information about my great-grandfather, the Civil War soldier who lived in Lynchburg at the time of the 1870 census and worked in a saw mill.  I hope to discover if he was working for Jack Daniels making barrels and making charcoal to filter the alcohol before the whiskey is bottled.  On Sunday, October 31, I visited my youngest son for lunch and then went for a 1-hour flight later that day.  Now comes the work of getting all this stuff posted where appropriate photos are available.

October 2, 2010:  RV-8 builder and pilot John Myers has a fish-fry fly-in on the first Saturday in October every year.  I have been to it several times since my RV-9A has been flying.  This year, I took along one of my old friends from Dalton High School.  We first flew over to the airport at Winchester, Tennessee (KBGF) to get fuel.  The letters are for Boiling Fork Creek which is near the Winchester airport.  The local EAA chapter was having a pancake breakfast and there were plenty of airplanes there.  This was the first fuel purchased since my return from Texas after the trip to Oshkosh, Wisconsin with my oldest son, also a pilot.  The view below is looking northwest along the route of Interstate highway 24 in Battle Creek Valley toward Monteagle Mountain about 50 miles west of Chattanooga by road.  I snapped this photo while flying to KBGF. 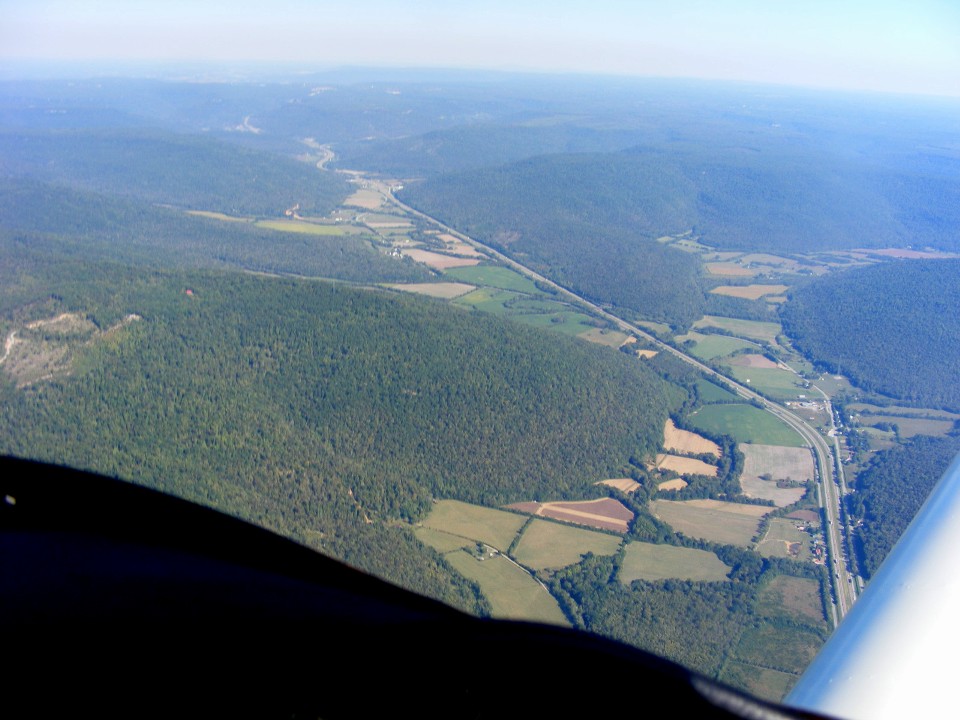 After getting fuel, it took about 30 minutes to fly down to John Myers field.   My friend Ronnie is watching a couple of pilots working on a classic airplane that pulled in right after we arrived. 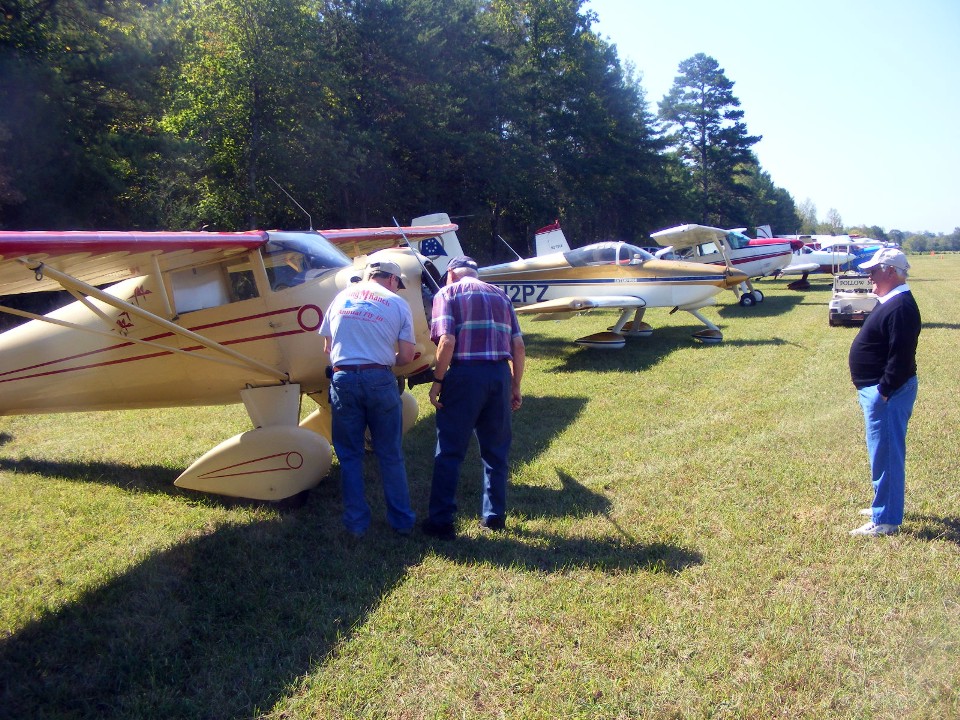 One of the guys working on the airplane came up on this golf cart to offer a ride to the pilot of the classic airplane.  As you can see, he has a young co-pilot for the golf cart.  My parking place this year is on the north end of the field on the east side of the runway.  A number of airplanes are parked beyond the trees on the other side of the runway and hidden from view in this photo. 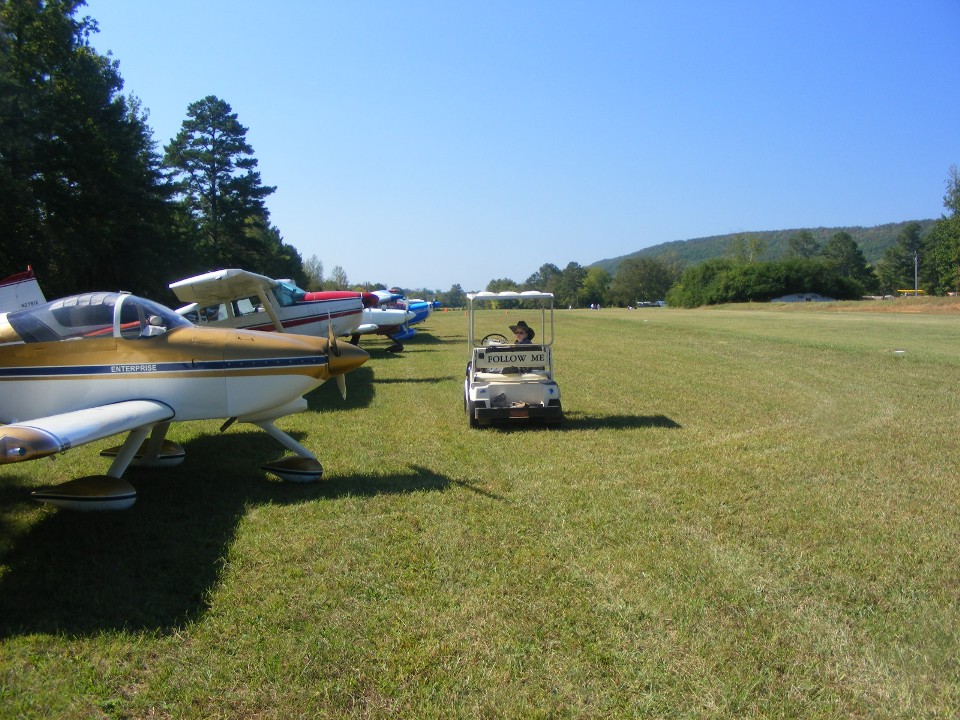 The view looking north shows a field of cotton growing north of the runway. 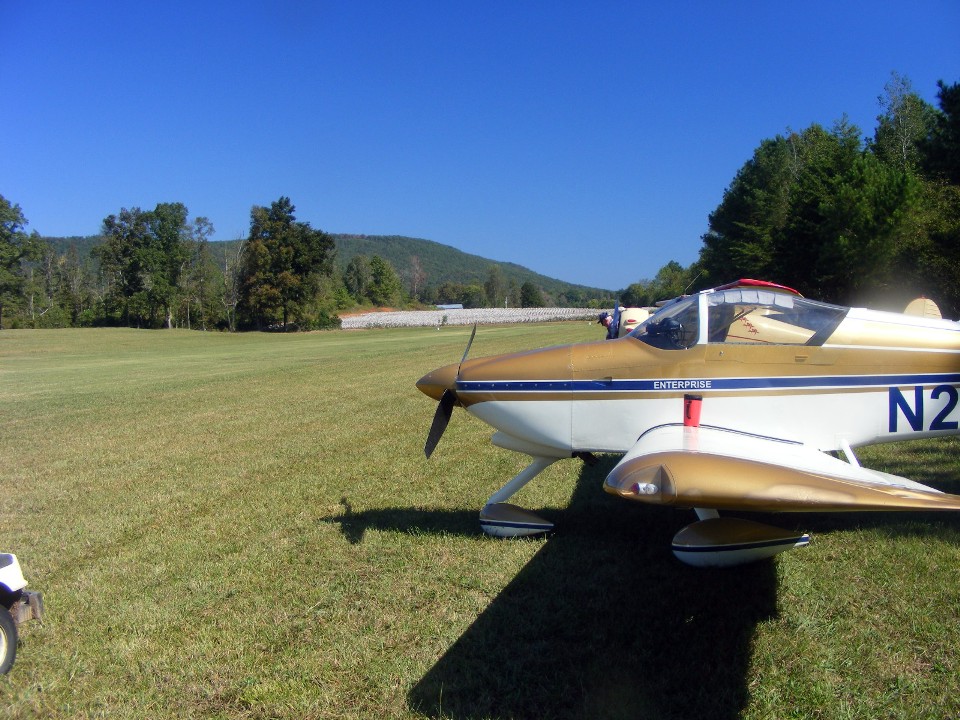 Wendell and Ronnie were having a good conversation as lunch was being served.   Wendell and three of his friends drove down the valley today rather instead of flying.  The trip by road is about 50 miles down the valley into Alabama not far from Cedar Point, Alabama. 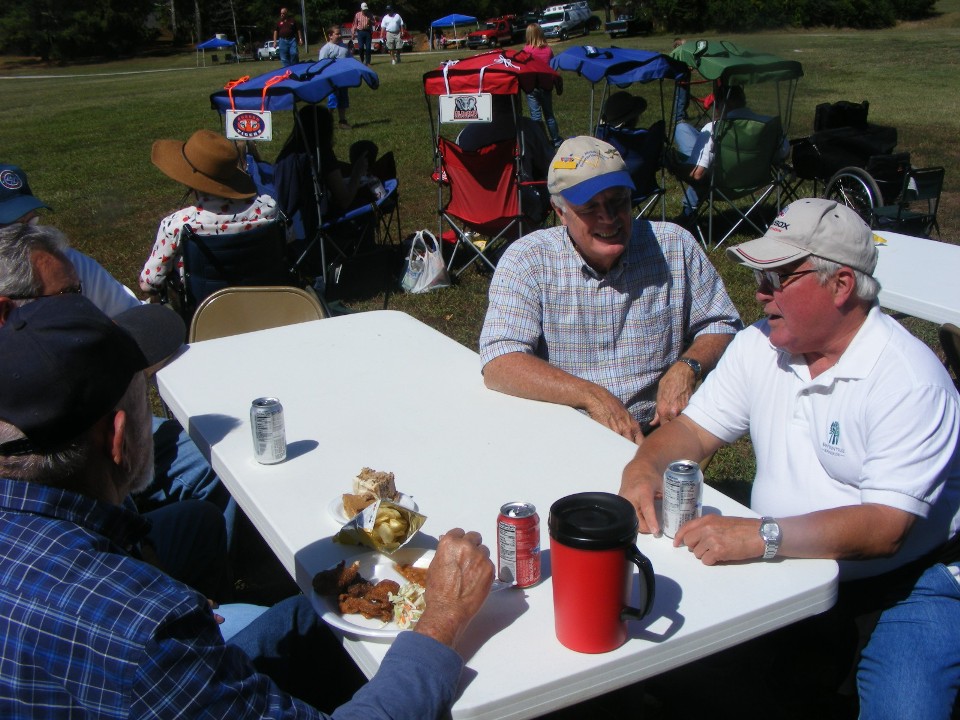 This Cherokee Chief caught my eye since it a tail-dragger with STOL modifications. 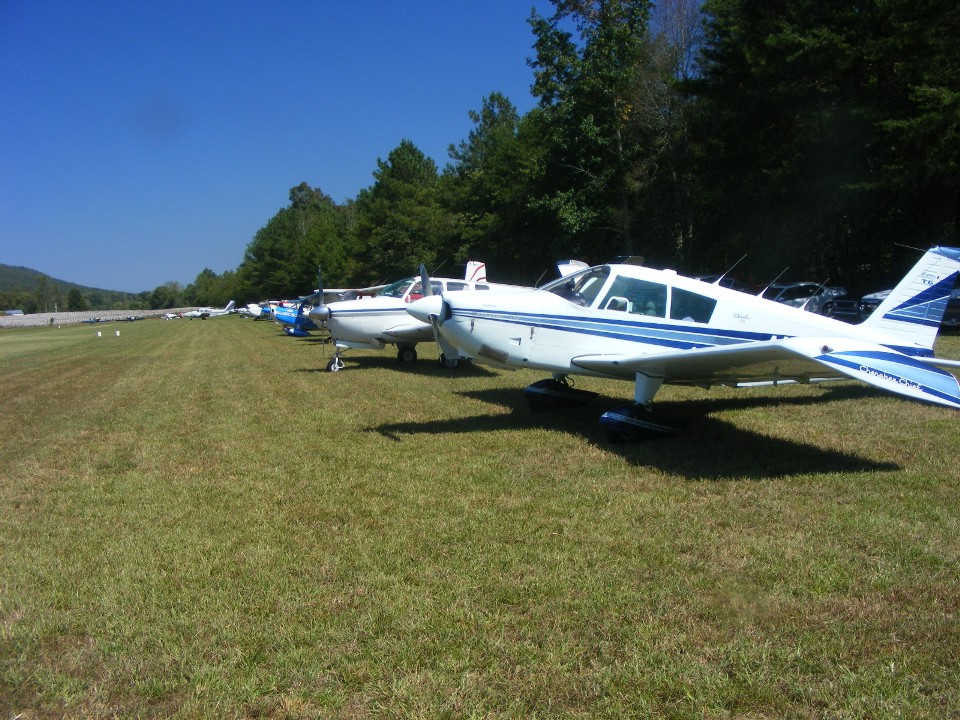 For those of you interested in the details, you can look this airplane up on the FAA registry. 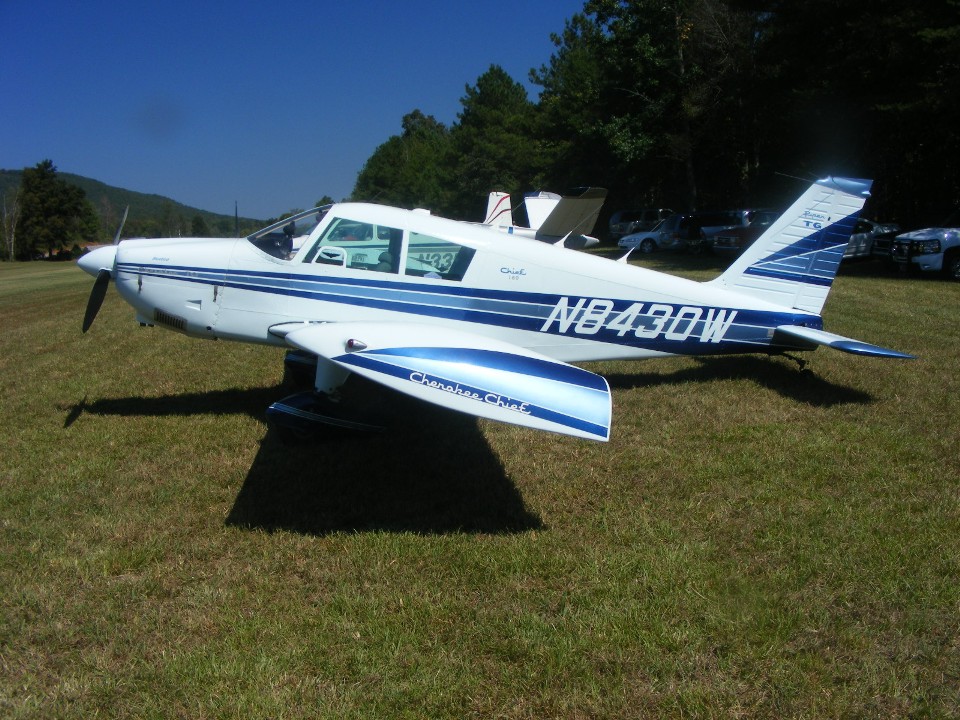 When I flew back to Folks Field, the Hobbs meter showed 329.1 hours.   Ronnie headed home, while I went by my place just long enough to pack up the rental car and head for Virginia on this Saturday afternoon.  I got to my usual fuel stop just north of Roanoke by bed time and checked into a motel.  On Sunday, I drove up to Pennsylvania to see my son and made a short detour through the Gettysburg battle field.   I will have more about that on PAGE 339.