November 19, 2009: Less than a half a mile up the street from Kirkwood stands this more contemporary mansion from the 20th century.   The message is the same, money and power in a small town in Alabama. 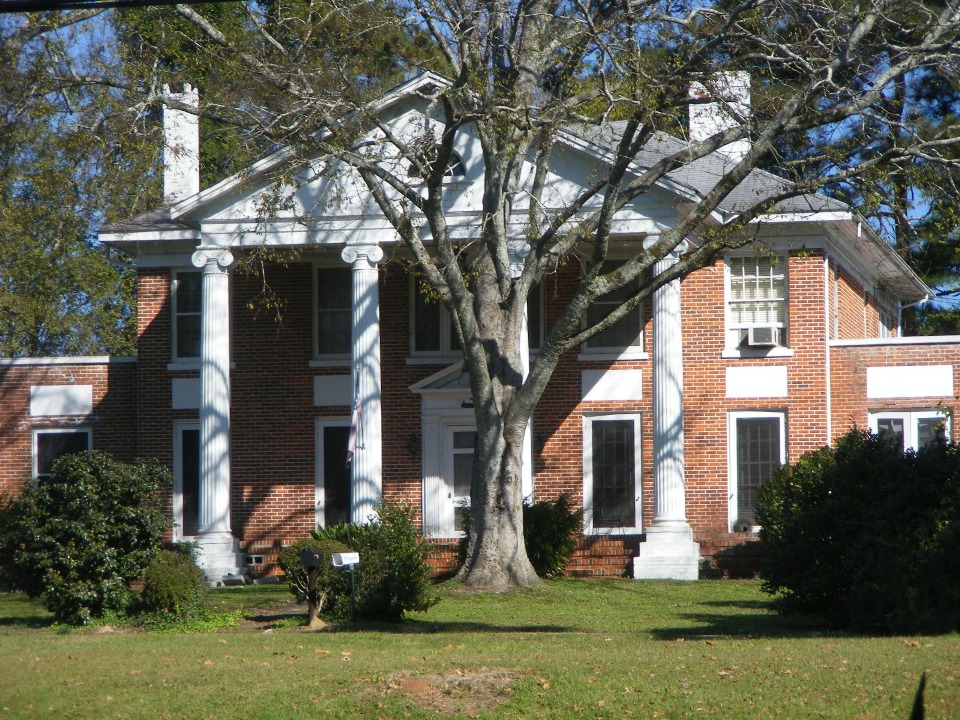 I traveled on US 11 on the way home between Birmingham, Alabama and Chattanooga, Tennessee.  The red leaves on these trees by the little pond caught my attention as I came over the hill.  I turned around and came back to take these next few photos late in the afternoon. 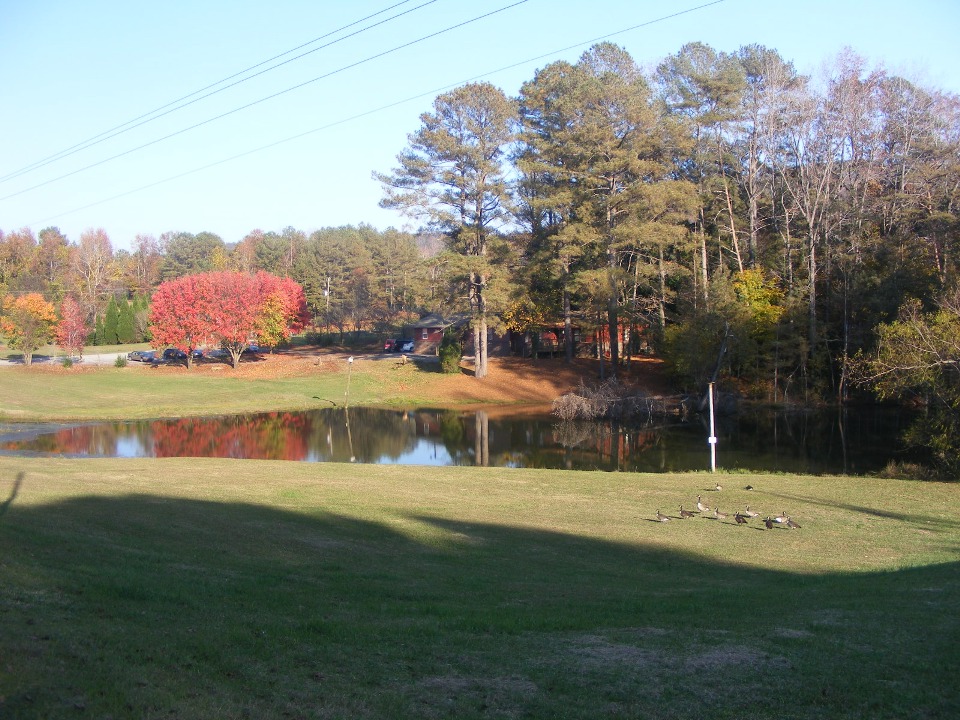 Scenes like these are why I like to get off the interstate highways and use the older US routes when practical.  Not only do I get away from the over-the-road trucks and traffic, but I get to see the countryside, not highway billboards.  These Canada Geese have found a winter home. 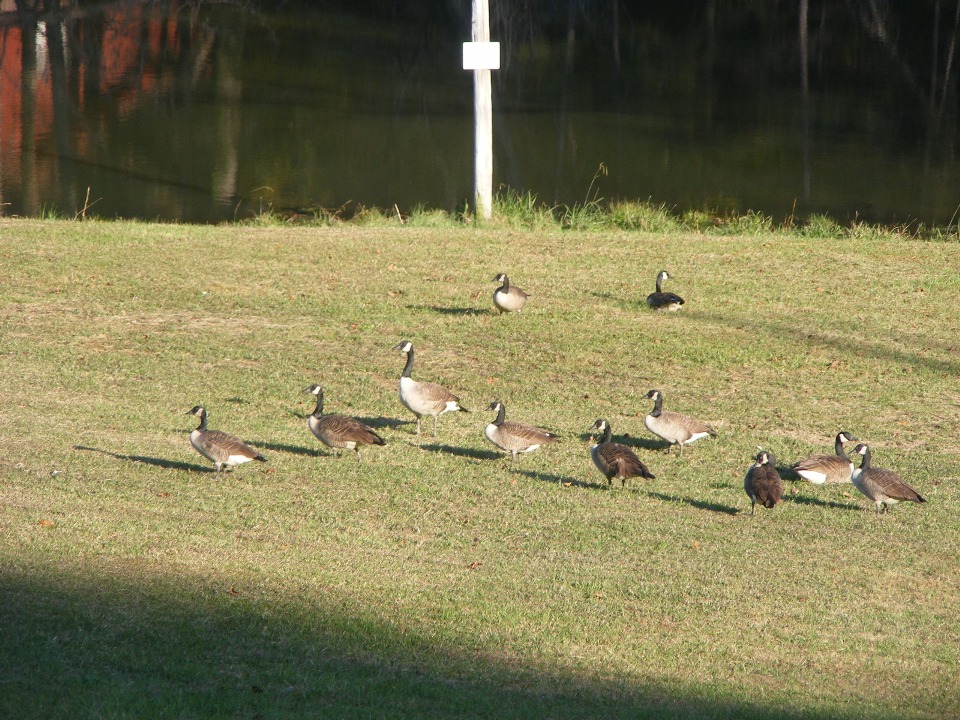 Here is a closer shot of the trees and the reflection in the pond. 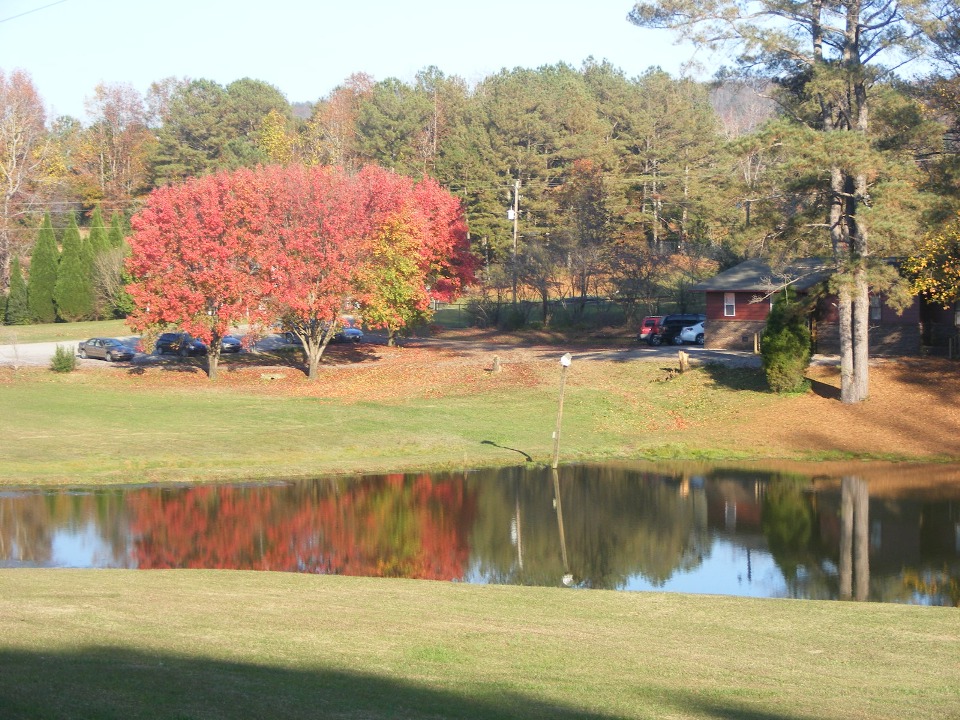 One more thing to note this Sunday evening after publishing this web site.   I had moved the files from C-drive to D-drive on the new hard disk.  The result was when I published the update to the web server, Microsoft Front Page published the entire web site.  I was surprised to see the file count was 5,464 files.   That includes all the photos, drawings, videos, and a couple of sound files from 638 web pages.  The upload time was about 1 hour and five minutes on my cable modem.

December 1, 2009:  Today was the first day with visible frost on the ground here in Chattanooga.  Here is a short update on the past weekend.  No flying due to gusty winds, and no place I really wanted to go on the days that it did not blow hard.  The weather was good with clear skies, but the wind would make takeoffs and landings an issue.

I had hoped to visit David Edgemon over the Thanksgiving Holiday weekend.   He was out of town and unreachable.  He had taken his family to the Great Smoky Mountains National Park area in East Tennessee.  He pulled his fifth-wheel camper trailer up there and had some fun with his wife and son.  I spoke to David on Sunday evening, November 29th.  He has his RV-8 at his hangar located at Moontown Airport (3M5).  He is doing the final assembly of his new airplane.  I hope to see him on the weekend of December 5-6 to photograph this new plane and provide a written report on the equipment in the instrument panel.  One of the local forecasters mentioned the possibility of snow for this upcoming weekend...

December 2, 2009:  When I went downstairs at lunch, I heard a lot of birds chirping outside.  When I opened the blinds, I found my front yard covered with black birds.  The light rain overnight had soaked the ground and the birds were getting the earth worms that came to the surface.  I got my camera out of the car in the garage and was careful not to slam the door closed for fear the sound might scare away the birds.  When I returned to the front window, I realized I would have to raise the blinds to get a good photo.  I started to raise the blinds slowly and a few birds close to the window jumped away about 10 feet or so.  When I raised the blinds a bit more, the flock in my front yard flew across the street. 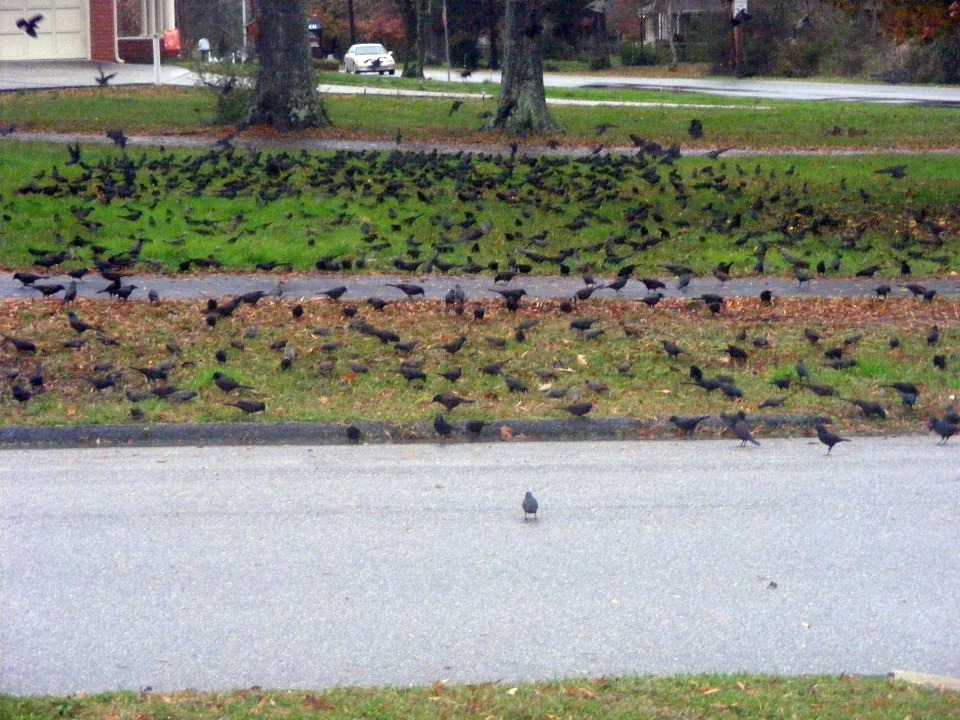 I took the above photo with my camera lens zoomed to get a good view.   Within a few seconds more birds joined those above in the feeding frenzy.  I was having a flashback to the Alfred Hitchcock movie "The Birds".  Just a few seconds after I took this photo, the car you see coming in the photo got closer and they all flew away. 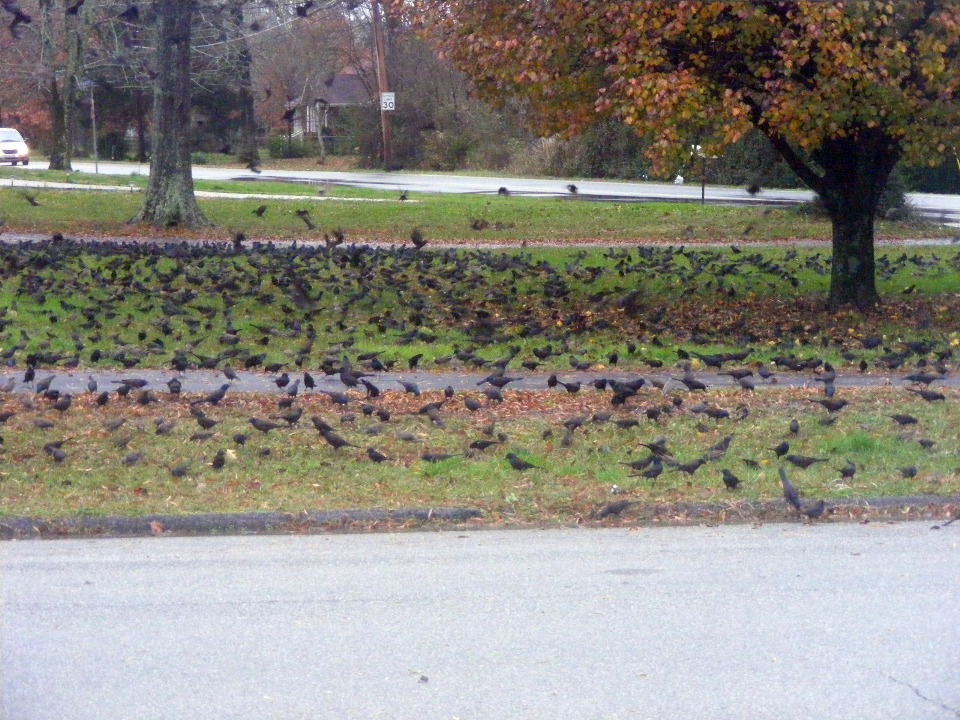 December 5, 2009:  It snowed in the Chattanooga area overnight.  The weather is too warm for it to last, but a hard freeze in the 20's is expected tonight.  This is Saturday morning when I had hoped to fly over to the Moontown Airport and visit with David Edgemon and take some photos of his RV-8 during final assembly.  I called Wendell and he reports the runway is snow-covered and will be mushy as a result.  No flying today.  If the winds pick up with the sunlight that is shining as I post this, the runway may dry out before the sub-freezing temperatures expected tonight. 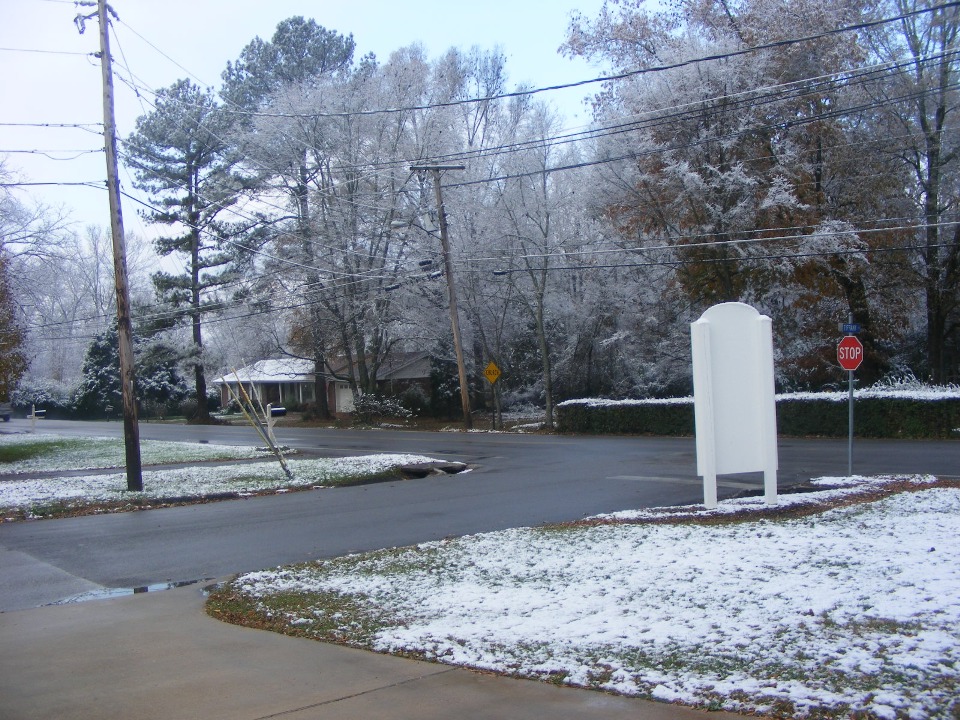 Here is the view looking the other direction on my street.  You can tell the temperature is warming up.  The road and driveway surfaces remained above 32-degrees F overnight, keeping the snow from sticking except to the grass, cars, and other structures above ground level. 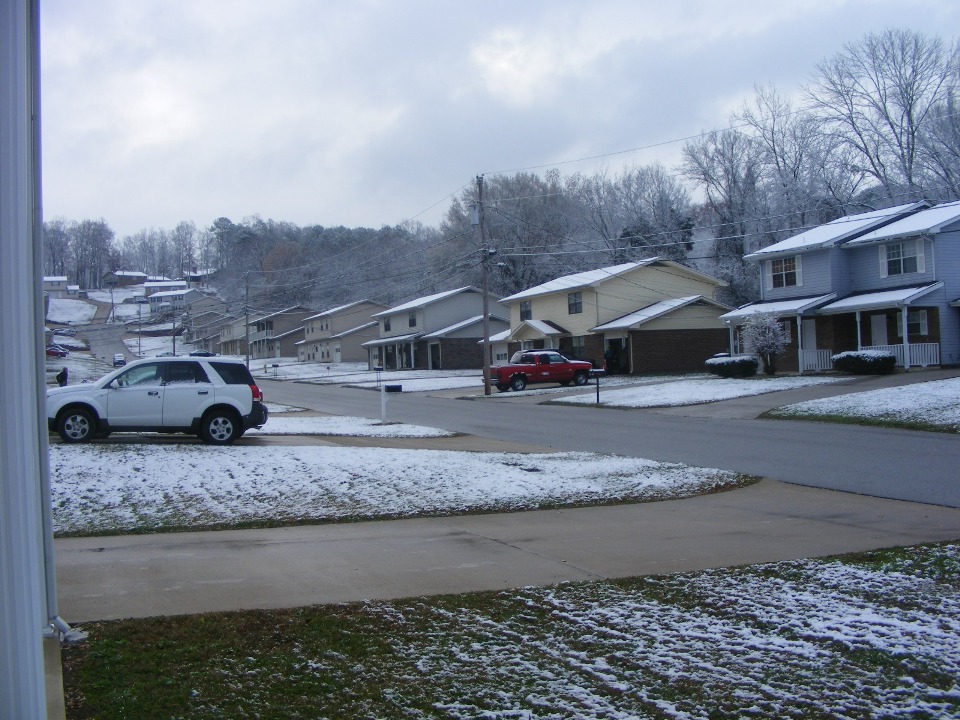 I just spoke to David Edgemon and he reports he will be at the Moontown Airport working most of the day tomorrow.  As for the rest of today, it is time to head over to Folks Field to see what the sun and wind are doing to dry the runway.  I also have to put my airplane heater on the timer to start warming the oil for a potential flight tomorrow.

Saturday night:  I made the trip to Wendell's during the afternoon and put the airplane on the timer to warm the engine overnight.   I have an appliance power meter to be sure the heat strips are working.  I checked the fuel in the tanks at 25 gallons, and the oil level is still where it should be.  The battery charger is showing green for full voltage, float charging. 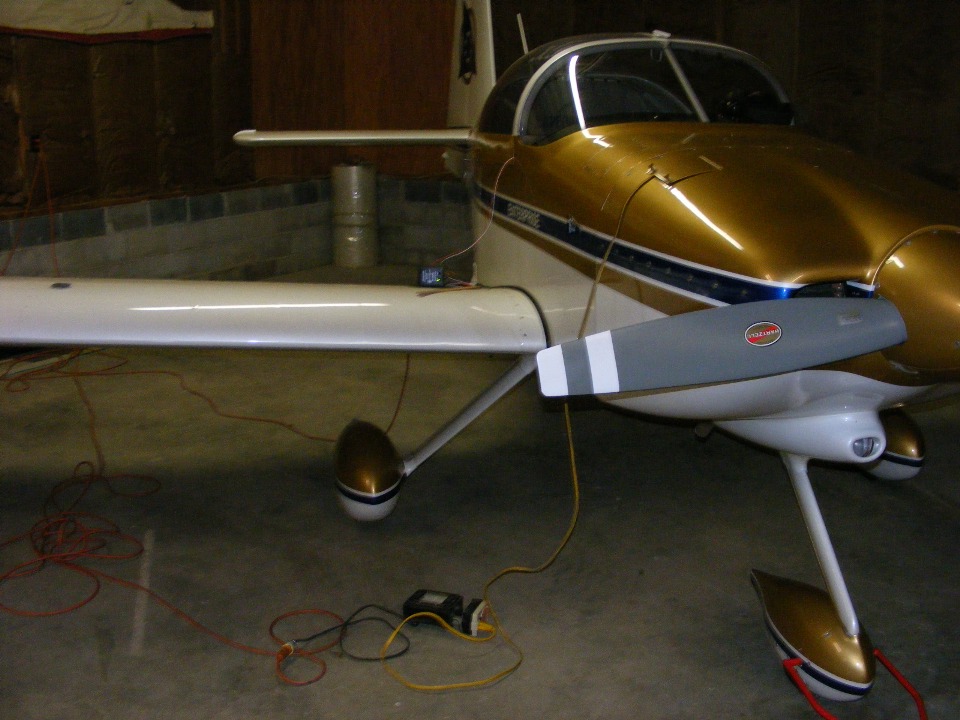 Wendell and I took a ride down the full length of the runway and found it soaked in a couple of places.  The cold front has cleared away all the clouds for tonight's freezing temperatures.  The light wind is out of the north as you can see.   The runway is aligned with 10 and 190 degrees magnetic.  If the runway turns to slush, I may have to drive my car to see David Edgemon tomorrow. 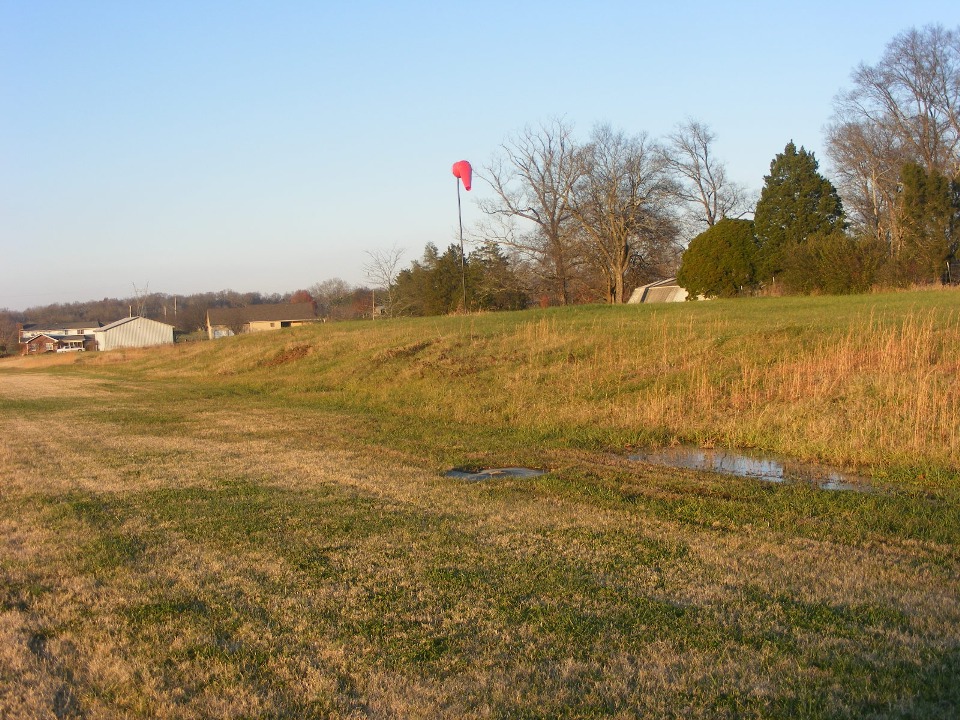 It is almost 8:30 PM as I publish this page and it already 32 degrees F outside.  The low is forecast to be 26 degrees F tonight.  The hourly forecast predicts 32 F in the morning by 9 AM.  I will make the decision at the field in the morning to fly or drive.

December 6, 2009: Sunday dawned with low cloud cover and freezing temperatures as expected.  The decision to drive to Moontown Airport was a prudent one since the runway would be too soft upon return later in the day with temperatures in the mid-40's.  I spent a good part of the afternoon with David Edgemon and have plenty of photos of his new RV-8 on his two NEW PAGES in the Other RV Section of this web site.

December 12, 2009:  The sun is up there, but just not visible with the very low overcast conditions in Chattanooga.  The temperature outside is 36 degrees with rain forecast for tonight.  The 10-day forecast is hopeful for next weekend, the last one before Christmas.  Since it is Saturday, this grocery and chore day around here, as usual.  Life cannot always be a great flying adventure.

December 13, 2009:  Sunday morning and rain outside my window when I arose from slumber.  The 10-day forecast indicates another few days of overcast or light rainy conditions.  The sun will return to the Chattanooga area after that, but next Saturday may again have rain.  After that, the prognosticators indicate two more days of sun, then snow showers on December 22nd.   We shall see!  The weather ahead dictates if I will be traveling by RV-9A for the Christmas season.

I did speak to David Edgemon again on Friday evening.  He is still cleaning up the final touches to his RV-8.  He expects some engine run and taxi tests before worrying about a first test flight.  He fixed the fuel line leak on the left side without needed to build a new fuel line.  Redressing the end of the line on the Scotchbrite wheel and putting a new flare on the tank-end of the line worked just fine.

December 17, 2009:  I got a phone call this evening from David Edgemon saying he flew his RV-8 for 2.1 hours today on the first flight.  He has not posted any flight photos, but this one photo is after all cowl work was completed and before the first flight. 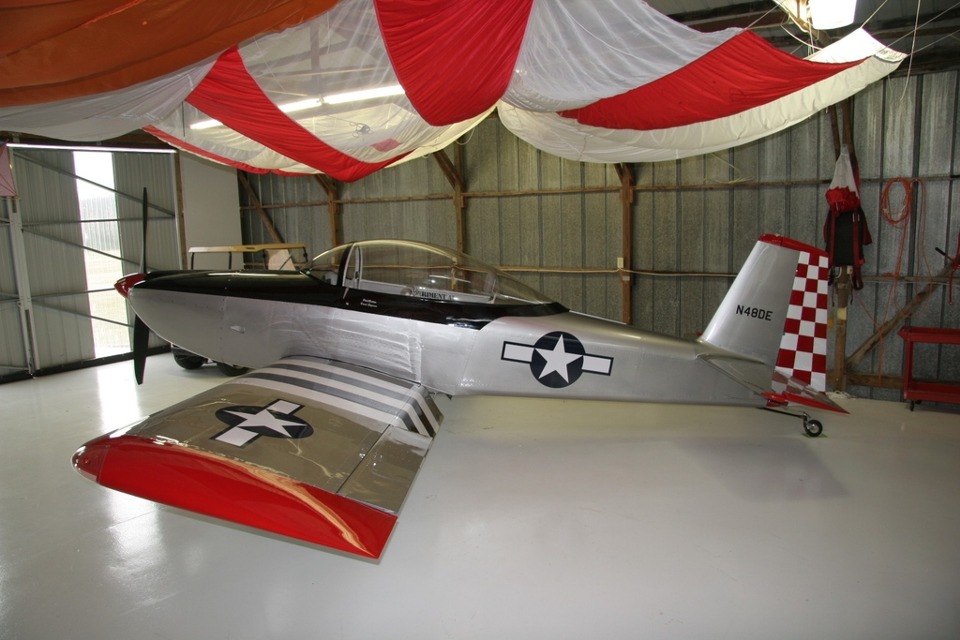