November 7, 2009: The weather this Saturday was forecast to be great all across the southeastern USA.  I had a house guest on Friday evening, my old friend from Florida, Monte.  He was up this way on business and needed to get a good night's sleep before heading for home this Saturday morning.  Bedtime was around 10:30 PM Friday evening.  My internal alarm clock went off well before the one on the night stand.  I managed to relax in bed, not quite going back to sleep.  When 4:45 AM came, I got up to get some breakfast.  I had showered and shaved the night before.  I got dressed and went downstairs to watch the weather channel and the forecast was holding.  I opened the front door and stepped outside into the 39-degree weather to see a clear sky full of stars and no ground fog anywhere.  Remember, I live in the Tennessee River Valley at Chattanooga.

After breakfast for me, I went up to check on Monte when I heard him cough around 5:30 AM.  We were both out the door by 6 AM.  He is not a breakfast person, but he did stop for his morning coffee before getting on I-75 southbound to Florida.   I headed out at the same time and got to Folks Field about 6:20 AM to find no ground fog over there either.  I loaded up the airplane and checked the engine oil.  The fuel was at 20 gallons in the tanks.  The usual fuel burn to the south Georgia airports where I refuel is around 12 gallons.

Getting the airplane out was easy this morning since Wendell took his RV-8 to the fly-in at Petit-Jean State Park in Arkansas.  He flew out on Friday morning with four other RV's from nearby Fort Payne, Alabama.  You can browse the forum posts before and after this event at Van's Airforce using THIS WEB LINK.   Using the online forum links to photo albums you will see Wendell, John Myers, and their airplanes at the event.

When I opened the hangar door, the twilight before sunrise was lighting up the runway.  By the time I got the engine started at 6:51AM and the wheels lifted off, it was 6:56AM.  The sun still had not come up.  After engaging the autopilot, I snapped this first photo at 6:58 AM looking east.  The sun is still hiding behind the north Georgia mountains at the southern end of the Appalachian Mountain range.  The camera exposure makes the ground look darker below me than it really was. 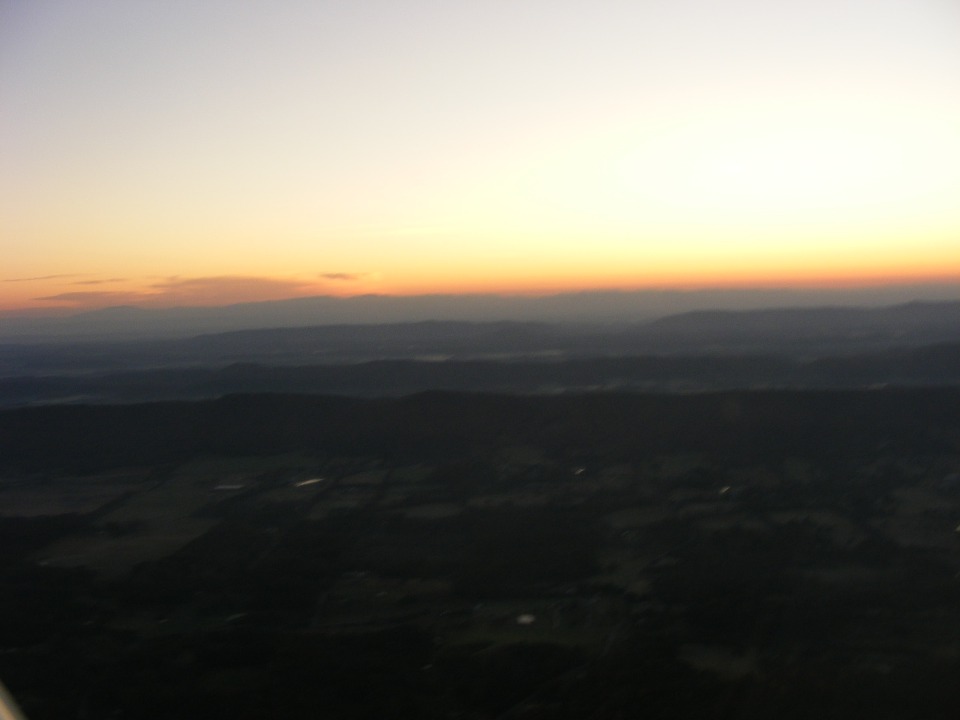 This second photo was taken at 7:34 AM, looking southeast from above Winder, Georgia.  Some ground fog is ahead over a lake and river. 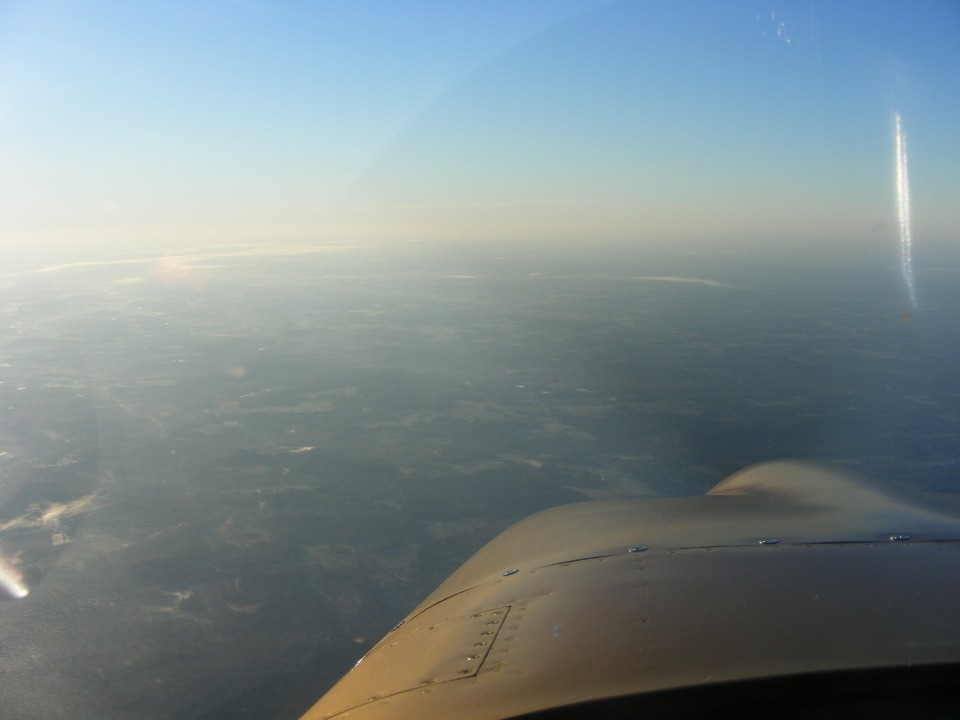 I took this shot about one minute later looking toward the southwest.  The haze covers the Atlanta area over 40 miles away.  I was making a swing around the Class B airspace on the eastern side. 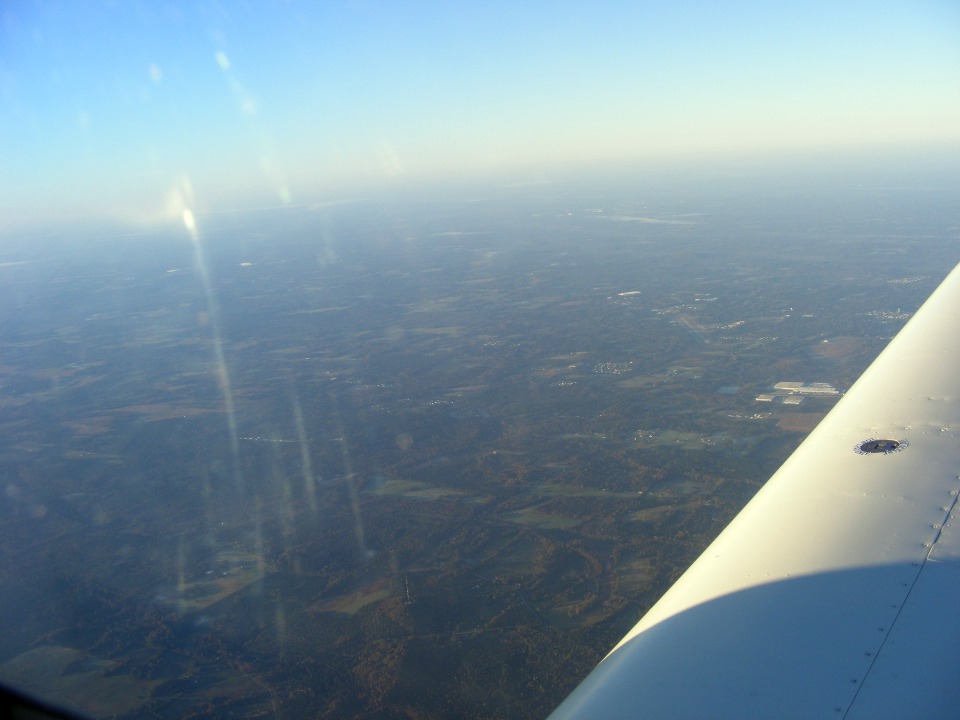 The smoke stack is located at a coal-fired power plant on the shores of Lake Sinclair.   The highway running left to right in the photo is US 441 in an area north of Milledgeville, Georgia.  This photo is stamped 7:52 AM, just over one hour after engine start on the ramp at Folks Field.  I had a 30 MPH tailwind from home to Winder, which became only 20 MPH when I turned on course for my fuel stop at the Baxley, Georgia airport.  Most of this flight was at an altitude of 7,500 MSL. 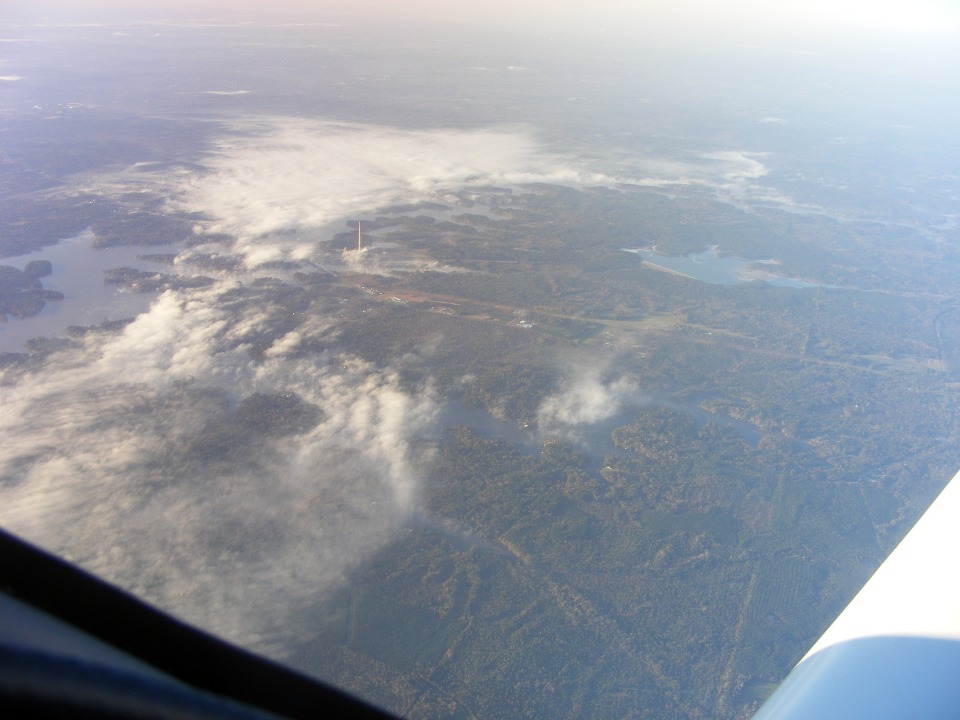 My arrival at Baxley was at 8:35 AM when I was parked on the ramp at the fuel pumps.  I went inside for the necessary stop and no one was in attendance this morning.  You enter the CTAF number on the electronic door lock to get inside.   By the time I got the fuel caps off and had the hose ready to turn on the pump, the attendant Ricky arrived with his two grandsons to check on some things.  I had spoken to him a few days before when this trip was in the planning stage.  He told me the airport manager "LIL" is planning to retire soon.  She was having a yard sale today at home.

The two grandsons were very interested in my airplane.  When the fueling was completed and I had a chance to wash my hands, I let them each stand on the left wing walk long enough to explain the details of the instrument panel.  I gave Ricky one of my airplane cards and told him about some of the adventures they can have online to Oshkosh 2005-2006, and to Alaska with Wendell and Terry.  This pleasant distraction for future aviators caused me to NOT take a picture of my airplane on the ramp next to the fuel pumps.  I did think about taking this photo at 9:07 AM from the runup area near the end of runway 28.  That white van is the courtesy car for transient pilots to run into town for a meal or overnight at a motel.  There are large old-fashioned "peanut jars" on the table just inside the front door with snacks in them.   The red brick building is the FBO office with clean rest rooms, TV, and computer internet access. 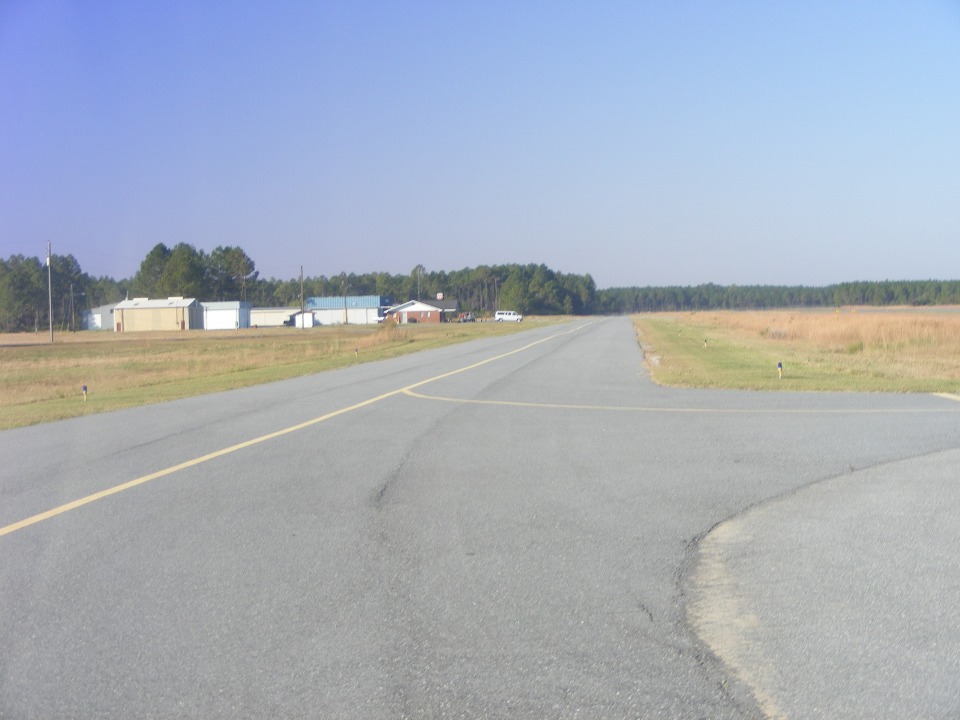 I was airborne well before reaching the FBO office.  The boys were waving to me and I returned a salute to them as I climbed out on the runway heading.  By the time I reached the west end of the runway, I turned on course and got the autopilot engaged for what would be about one hour and 20 minutes of flight time to Love's Landing airpark on the county line between Marion and Lake Counties in Florida near the town of Lady Lake.

That round lake ahead to the left is Kingsley Lake at the Camp Blanding National Guard base near Starke, Florida.  The round shape of the lake is a result of it being created by a "sink hole" - - a common phenomenon in the Florida peninsula due to the limestone below the sandy soil in this area.  My course here is 180 degrees "due south" and this view is looking toward the southeast ahead of my left wing.  The town of Starke is at the right center portion of the photo with US highway 301 running through it as the main drag.  This area is about 120 miles south of my fuel stop at Baxley. 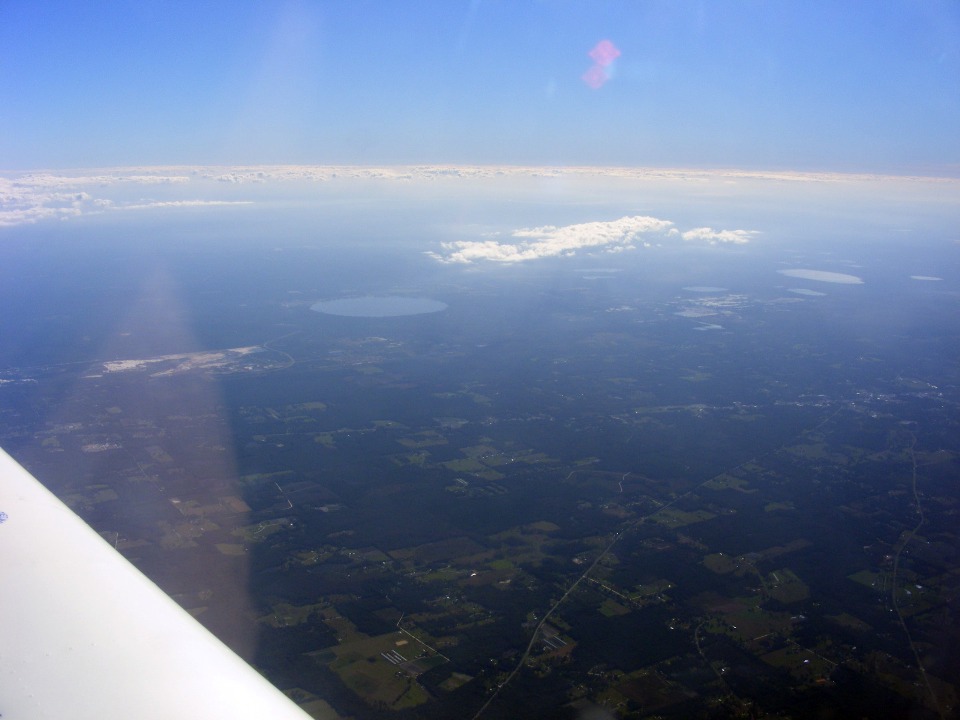 I had to climb up to an altitude of 10,000 feet MSL to get a good tail wind again.  At this altitude, the RV-9 wing is in its element.  I turned my camera aft to see how the elevator trim was doing.  I was pleasantly surprised to see the elevator even with the horizontal stabilizer to produce minimum drag and best true air speed of about 160 MPH.  The GPS ground speed was about 178 MPH here.  US 301 is visible as it heads for Callahan, Florida in the northeastern part of the state.   That red object reflected from the inside of the canopy is my Bogert tow-bar in the cargo area behind my seats. 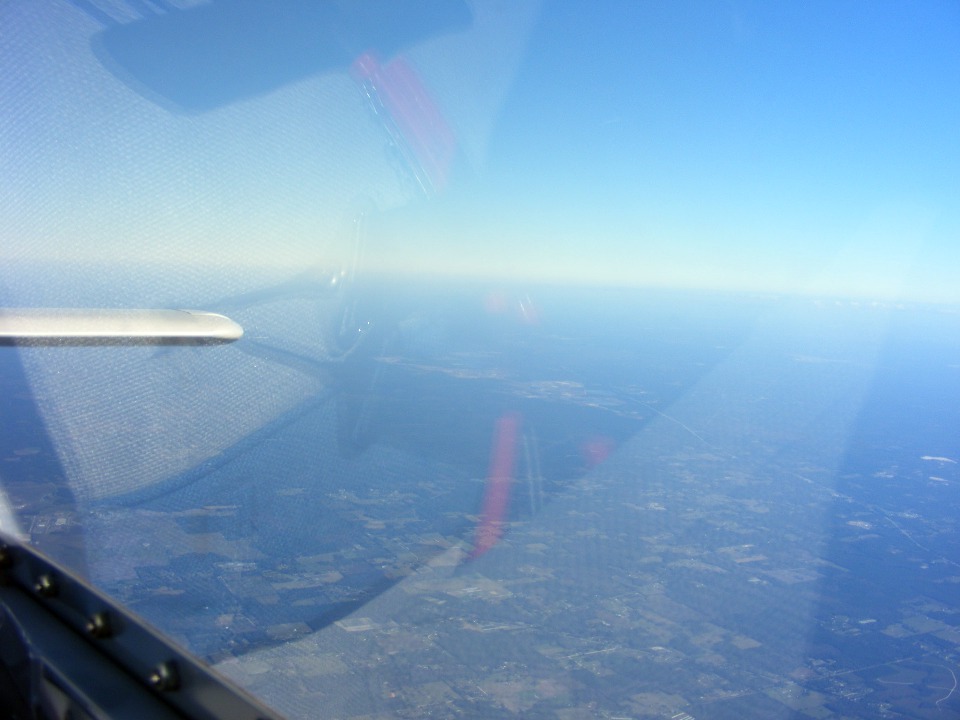 That triangle of open land you see in the upper left corner of the photo below is Keystone Air Park.  The number of round lakes here gives testament to the sink holes that have opened up in this region over hundreds, if not thousands of years.  I used Corel Photo Paint to enhance this photo for clarity and haze "reduction" as seen below. 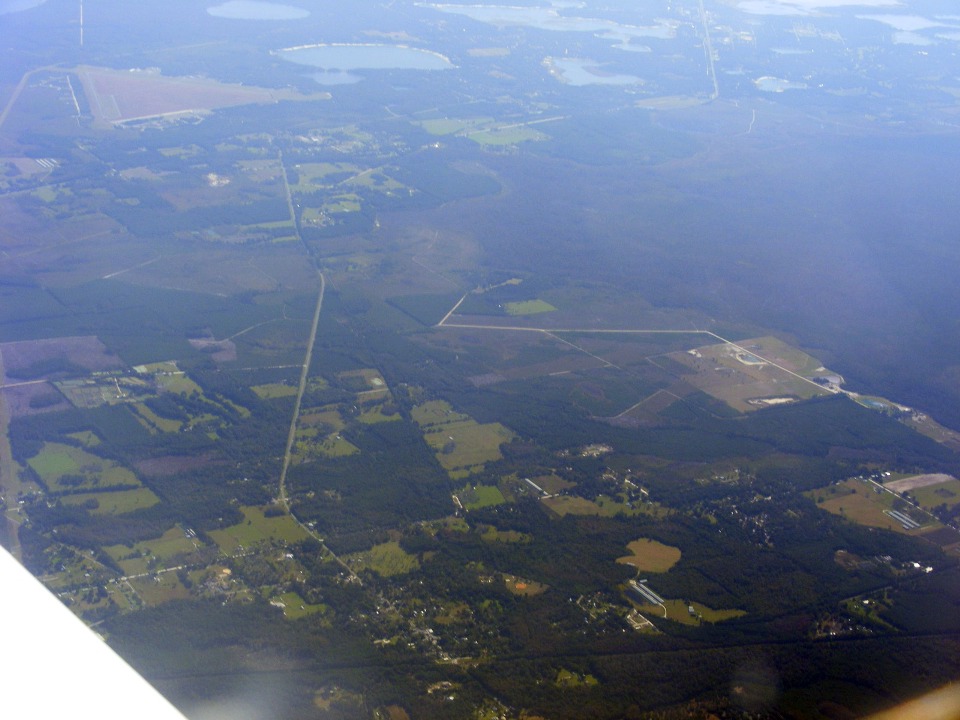 I put my camera away as I started to approach my next waypoint just north of Ocala, Florida.  I was using the private Greystone Airport where John Travolta lives as my waypoint.  This gave me a place to turn that would keep me well clear of the restricted airspace where the US military conducts live fire and bombing in the Ocala National Forest.  When I lived here in the 1980's, you could hear bombs going off at night on some occasions.

The descent below the scattered cloud layer seen here produced some turbulence.   I crossed over the Silver Springs tourist attraction where the Johnny Weismuller "Tarzan" movies were filmed in the 1930's and 1940's.  Many of his swimming scenes were filmed in the Silver River there.  And yes, they still have the descendants of those monkeys there, plus some Florida alligators of course!

The wind blowing down near the surface was out of the east at 18 to 20 MPH.  It made for some interesting radio chatter for the pilots landing on the long runway 36 here at Love's Landing.  Things smoothed out when you got below tree top height above the runway.  I touched down about 10:25AM and took this photo at 10:30 AM after getting the airplane safely parked on the west side of runway 36.  The line of airplanes to the north would eventually reach the east/west runway at the north end of the field.   As you can see there are a few more RV's north of me with a Cessna and a two-seater, powered ultra light wing up the way. 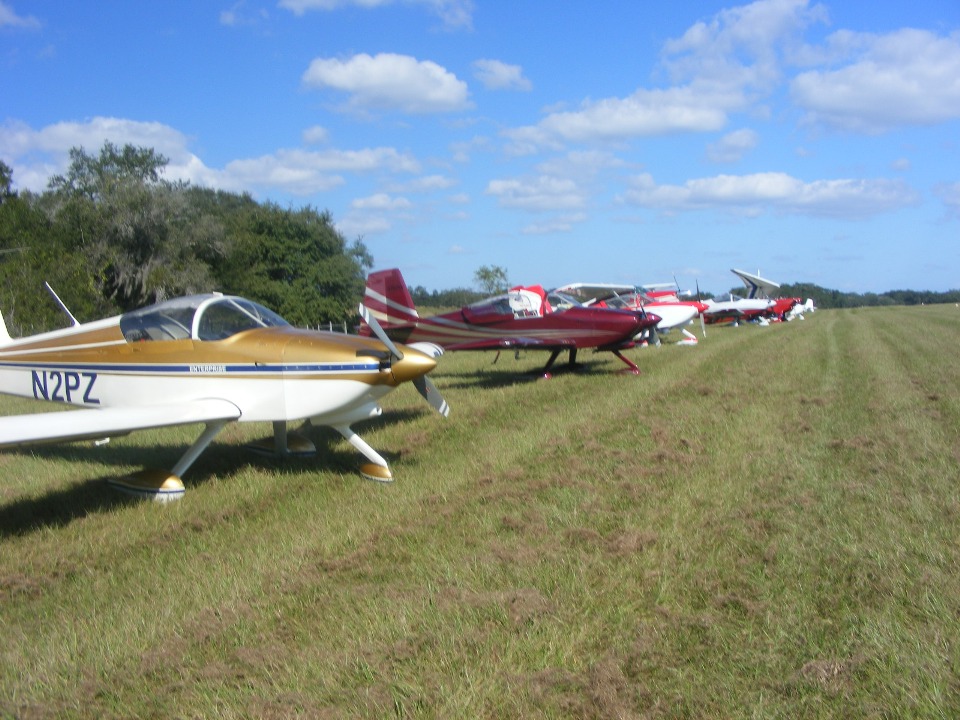 Here is the view looking south.  Everyone is gathering on the other side of the field down past where the airplane is rolling out after touch down.  An RV-7A was parked next to me, and a Sonex in Orange and White is next to him. 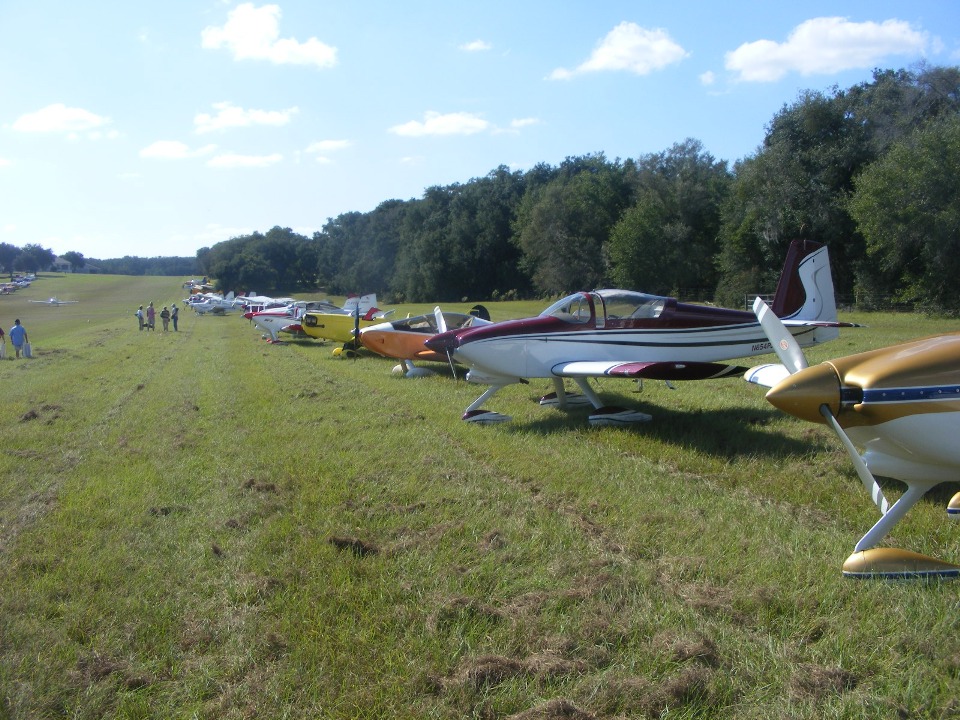