September 26, 2009:  We actually had some days without rain during the past week.  Last weekend was a time for record rainfall and flooding in Georgia between Atlanta and Chattanooga.  Rain came again today, Saturday.  This time it is from a front moving through the Chattanooga area which is supposed to clear things out and bring cooler fall weather.  The 10-day forecast is for sunny weather ahead, with a possibility of rain showers NEXT Saturday.  We shall see how that changes as the week progresses.  Tomorrow should be better, but we shall see.

I have one minor airplane task to accomplish today.  That involves putting my new aircraft registration in the cockpit clear pouch.  My street address was recently changed by the local 911 office.  The aircraft registration was one of the last things to be updated.  But as you can see, the rain is coming down and I think I will stay home today.  I opened the garage door to show the storm drains at the end of my street being overwhelmed by the runoff waters from up the hill. 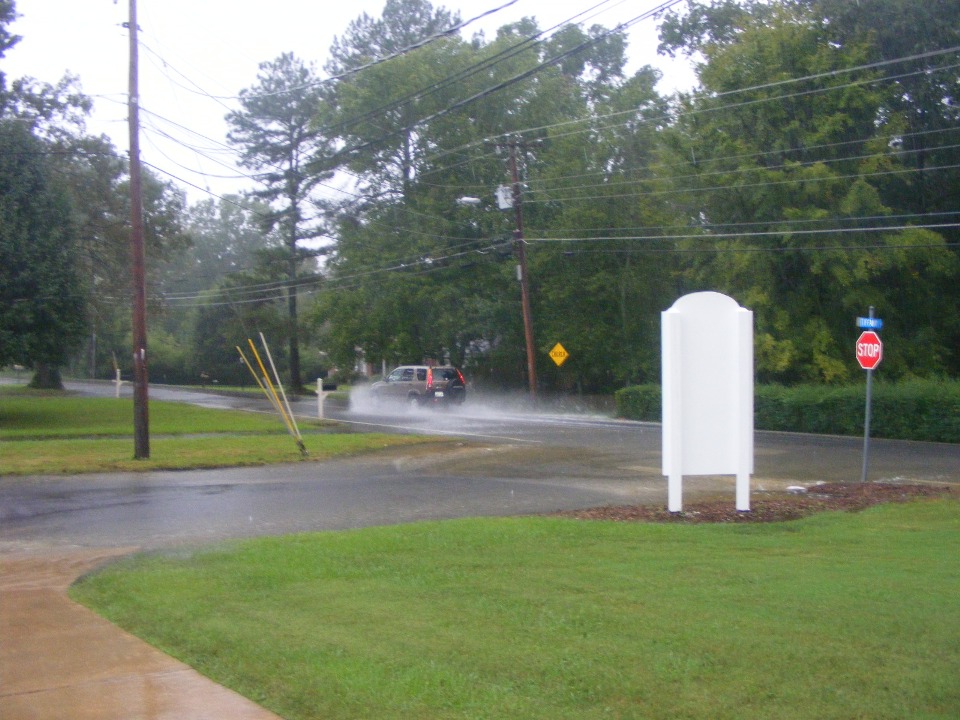 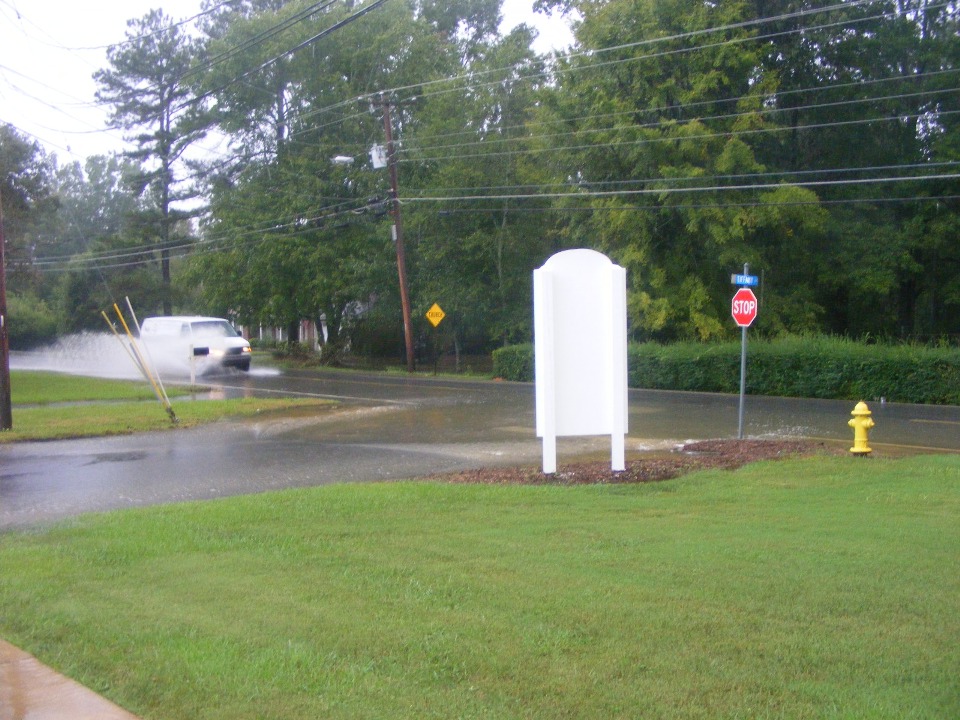 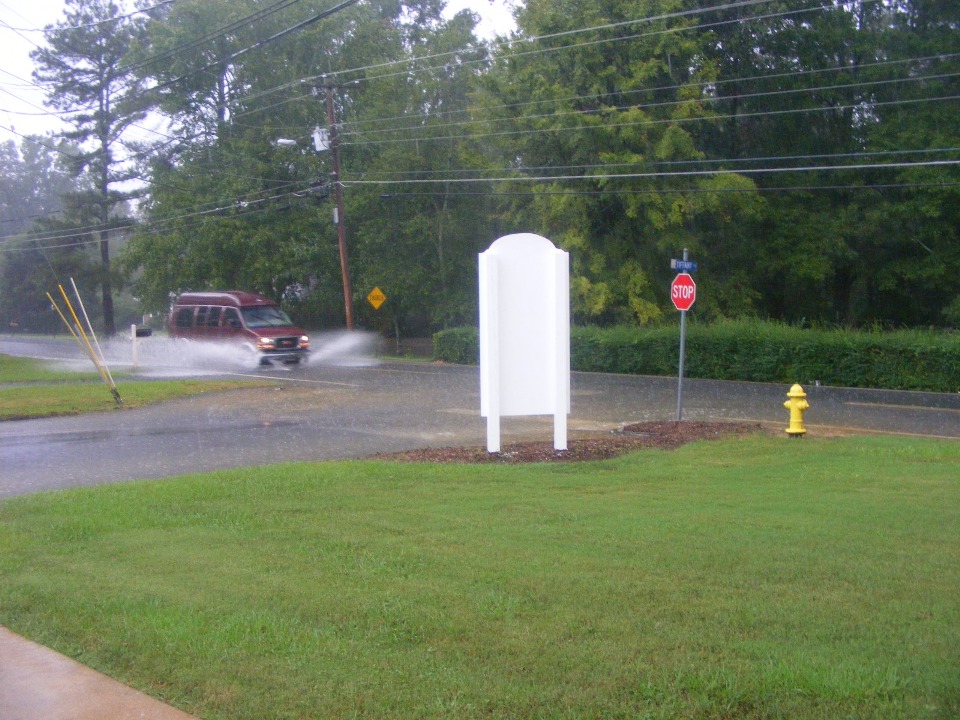 This shot of the driveway next door and the confluence of water from above gives an idea of the speed and amount of water moving here.  You had to see it in motion and hear the rush of the water to get the true impact. 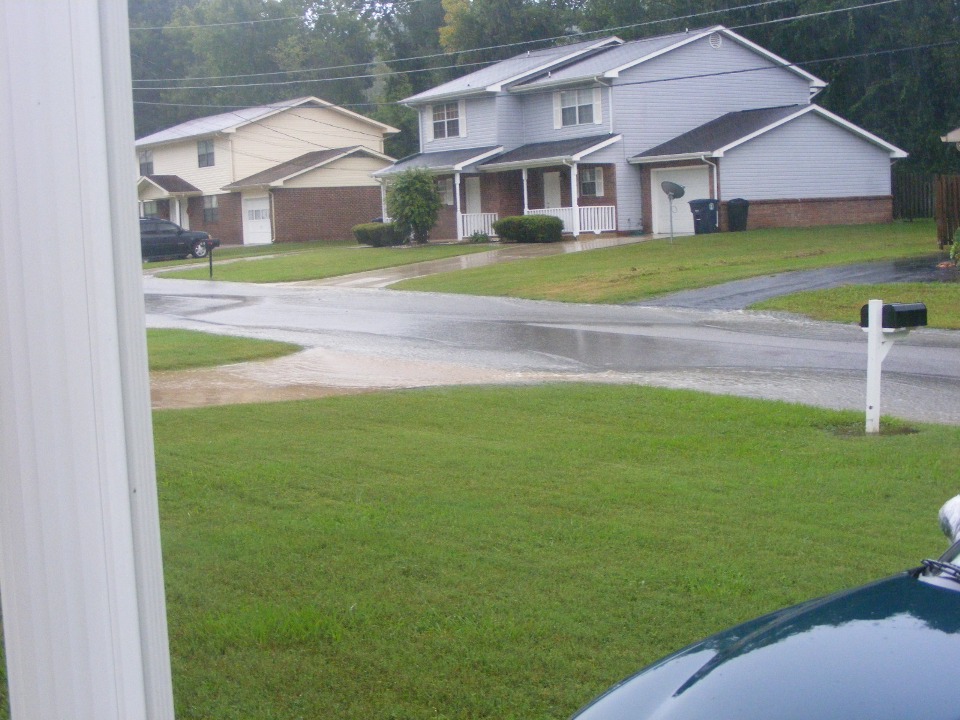 The car passing by is in the middle of the street and is still creating quite a splash.  The water is deeper in the lane on this side of the street. 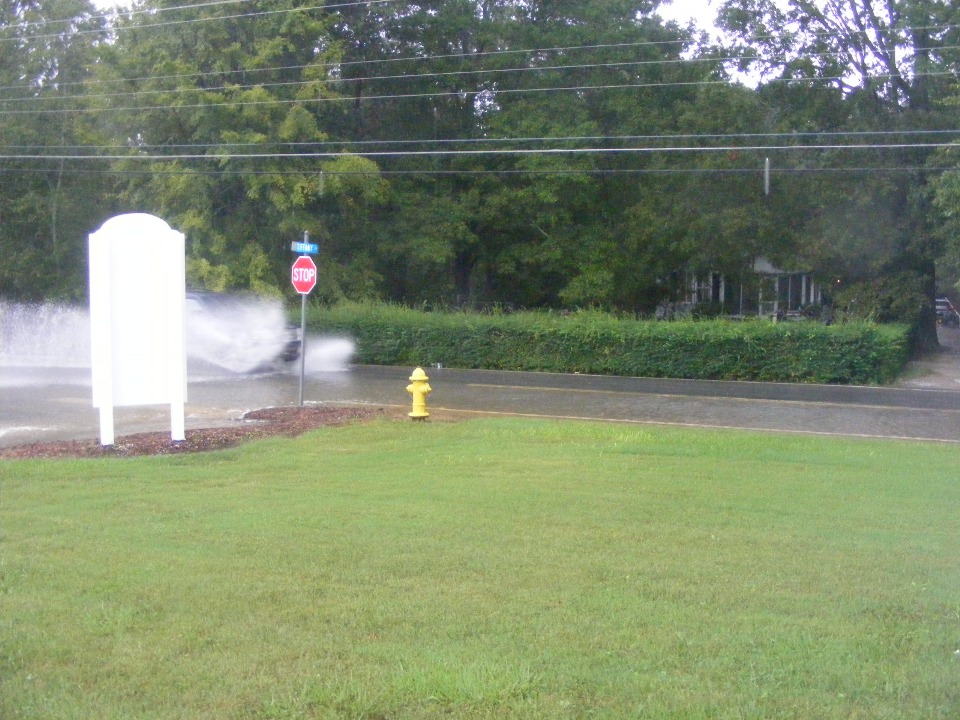 This photo shows a car that cannot get into the middle of the road.  The other thing that is happening here, my camera went into flash mode and has focused on the rain drops a few feet in front of my camera.  the rain drops are appearing as streaks and a few of them are reflecting the flash.  One of the most visible rain drops reflects as white in color and is just above and in front of the windshield of the tow truck, about half way up to the wires.  Because the flash is triggered, the actual shutter speed of the camera is slow, making the stop sign smear with my shake of the camera, yet the reflected rain drops are in sharp focus.  The other "streaks of rain drops" are showing the actual shutter speed effect. 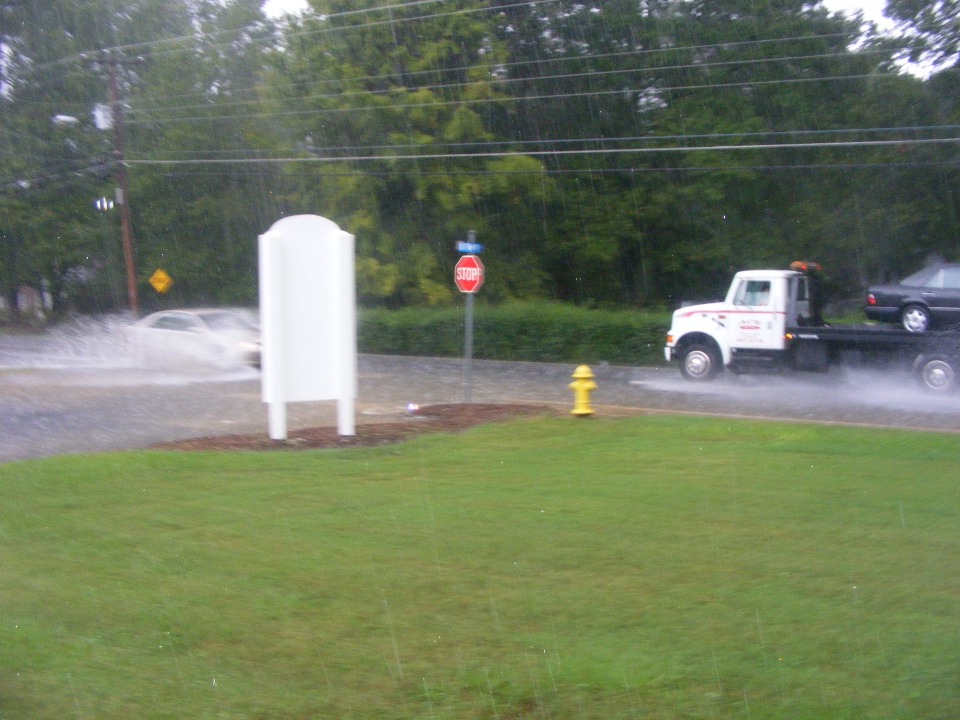 I wanted you to see the size of the storm drains after the deluge had subsided.   This is the one on the far side of the street.  Those openings are about 10 inches high.  They were hidden in the photos above, and even the concrete cover was out of sight. 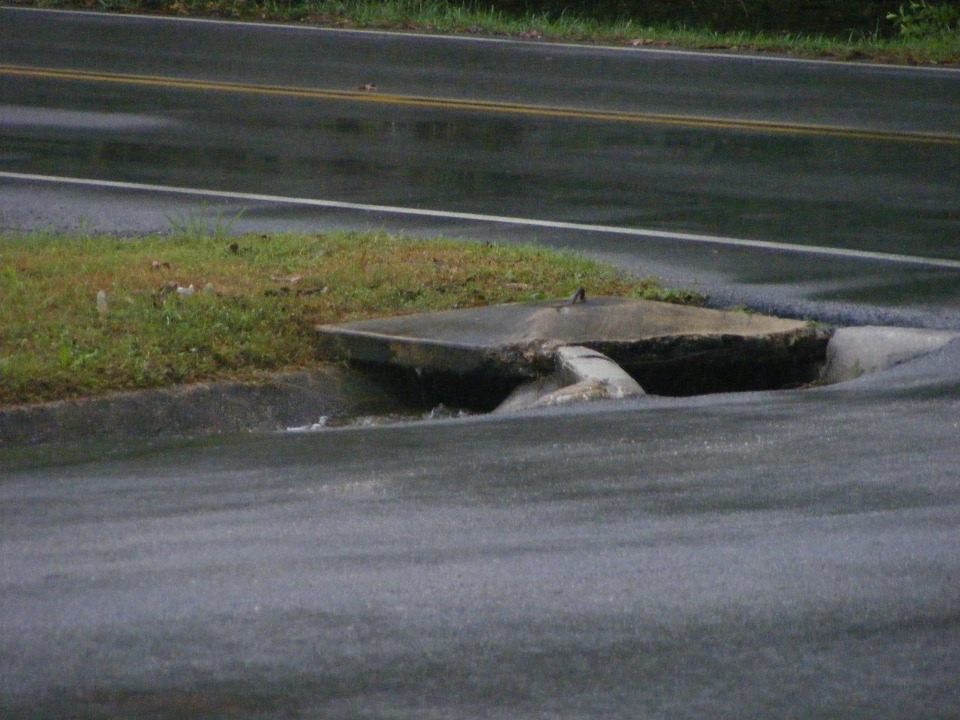 September 27, 2009:  This Sunday morning brought beautiful blue skies and NOT a cloud in sight.  It was about 1:30 PM when  I stepped outside and took this photo just before heading for the airport with my new aircraft registration in hand.   The openings to the storm drain on my side of the street are bigger, about 14 inches below the concrete cover. 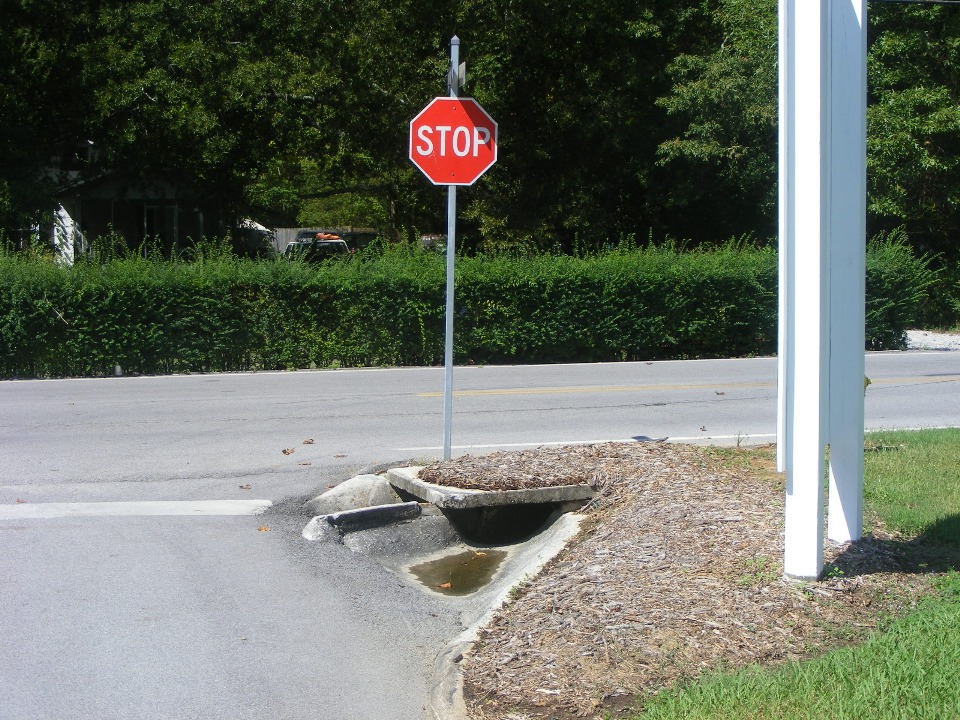 I drove over to Wendell's and found him and his wife in his airplane coming down to the end of the runway as I pulled in the driveway.  I expected him to take off, but he came back to the ramp to see me.  He turned off the engine and asked me to come around to the right side of the airplane.  He was having a bit of trouble with his intercom, which turned out to be the settings of squelch and volume for his wife.   She could hear him, but he could not hear her.  She has a new headset that fits in the ears, not over the head with the usual ear cup design.  He then told me they were heading over to Collegedale since today is the annual open house at the airport.  I asked about runway conditions after all the rains and he said it was fine, so I loaded up the airplane and departed about 10 minutes after they took off.   The ride over the nearby ridges was a bit bumpy since the winds around 1000 AGL were about 15 MPH from the west.  That front was clearing out the area.  The evaporation from yesterday's rains created a scattered cloud layer at about 3,500 feet MSL.  I never climbed above 2,000 to stay below the outer ring of the Chattanooga Class C airspace.

When I got to the Collegedale airport, Wendell had managed to get an excellent parking spot, but I had to go down the south ramp to a tie-down area in front of the hangar where I did the final assembly of my RV-9A.  I walked back up the ramp and got into a conversation with a pilot (retired FAA controller) about the construction of Van's RV's.  I pointed out some features of Wendell's airplane during that conversation.  Then I came over to where I am sitting at a table and having a hamburger from the local EAA chapter 150.  When this SNJ cranked up, I took this photo. 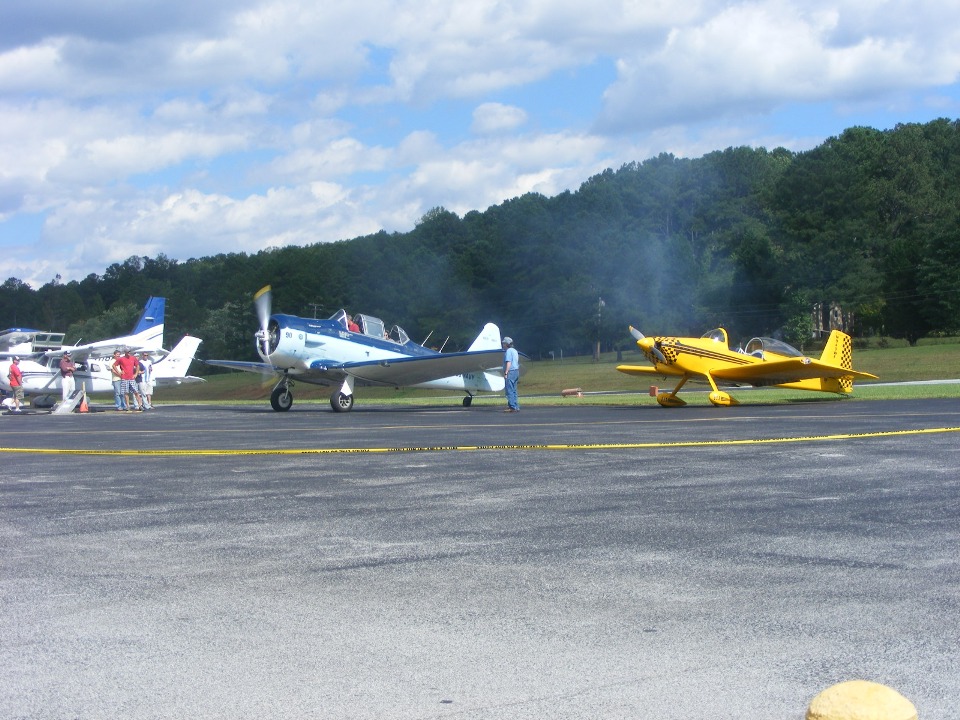 This is the view of the ramp in front of the buildings and hangar row.  I noticed the FBO building now has the name of Frank Zarski on it.  Frank was the airport manager here for many years before cancer took his life. 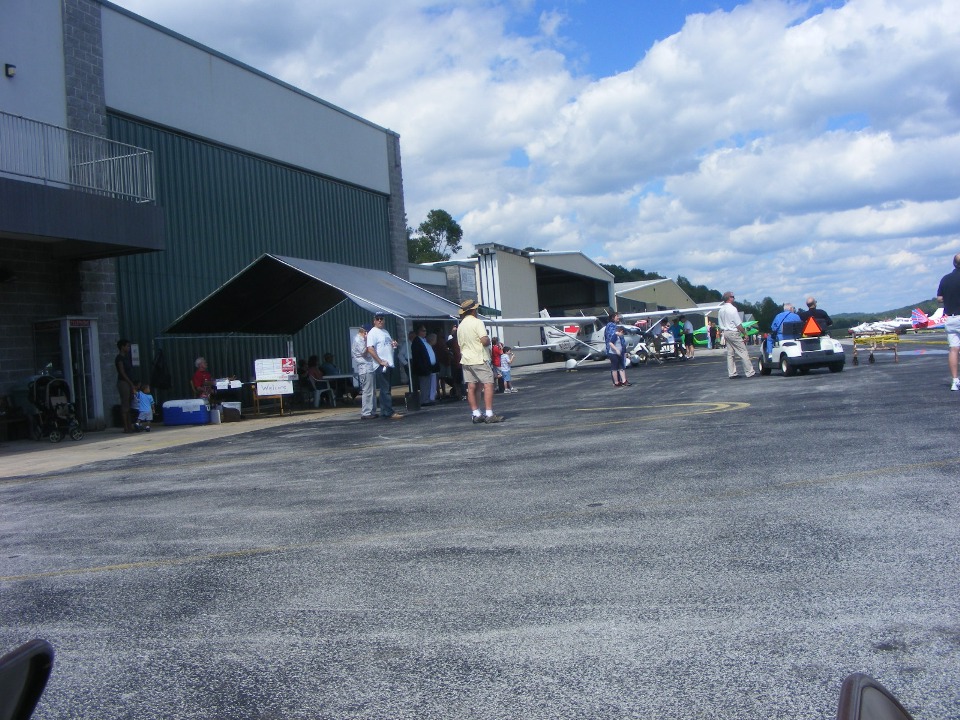 During the course of my conversations, I went inside to the computer terminal to show a few pages from my web site to two other pilots.  After about an hour, I realized Wendell had departed for home.  The retired FAA guy walked with me back to my airplane to see my instrument panel layout.  I explained the Dynon D-10A and how it interfaces with the Garmin GPS 296 and the Garmin SL-30 NAV/COM radio via switchable RS-232 connections.   I did all this when I got into the airplane and prepaired for engine start.  I also explained the engine monitor and its various display screens.  When I finished the presentation, I cranked the engine to idle, said goodbye, and headed up the ramp toward the runway.  One airplane took off as I was coming up the ramp and two other Cessnas from the flight school were giving rides to the locals for a fee of course.  I called them as they were taxiing to the runup area at the north end of runway 21.  There was enough room for two of us to get into the box as the first of the Cessnas pulled into takeoff position.  When they turned out after takeoff, I used full power and lifted a few feet above the runway, building up a lot of speed.  When I reached the area in front the ramp area seen in the photos above, I relaxed the forward stick pressure and the airplane shot up a good 600 feet before I trimmed it to a more leisurely climb rate while reducing the power setting.  Wendell came out to meet me when I got back to the field and landed.  His RV-8 was on the ramp in front of the hangar.  I pulled in behind him and shut down just before he opened the hangar door.

Wendell was telling me about a fly-in down at John Myer's field scheduled for next Saturday.  I made a quick check of the airplane and decided it did not get enough bug hits to need cleaning today.  The Hobbs meter got 0.7 hours on it today for the short flight over to Collegedale and back.