May 9, 2009:  This is one thing every home builder likes about his airplane maintenance.  Earning the repairman's certificate allows the builder to do both minor and major repairs to his airplane.   Today it was a minor repair that required me to remove my left elevator from the airplane and replace several rivets in the trailing edge.  Since these rivets were originally installed using a back-riveting technique, I had to remove the elevator and put it back on my work table where it was built. 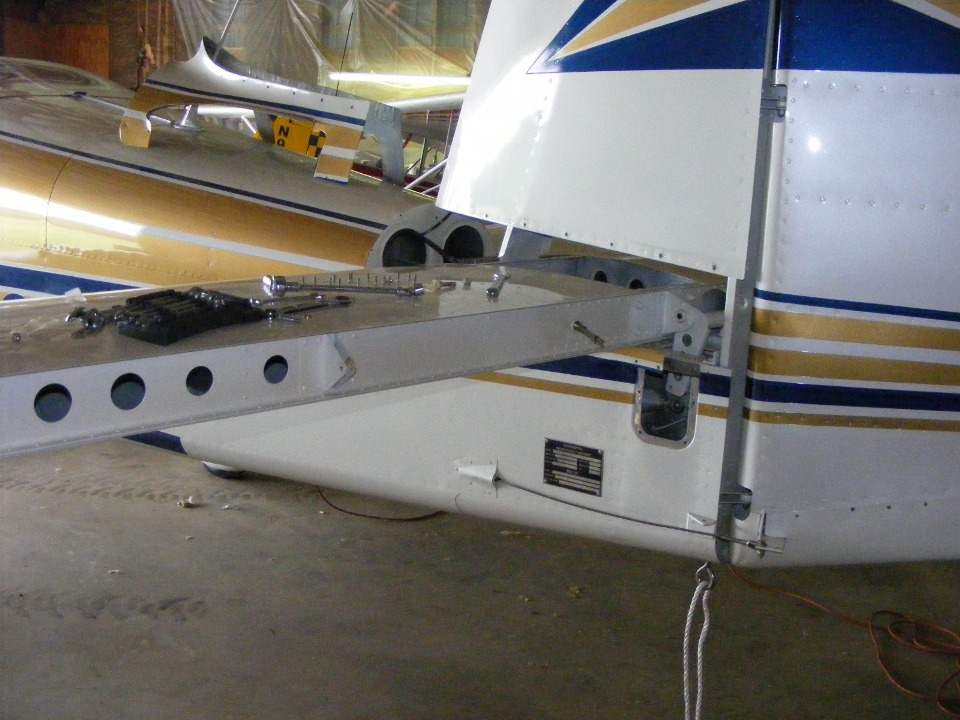 I cleared much of the work table and installed the steel back-riveting plate in the surface of the table again.  I examined the rivets that had been loosened and pulled through the lower elevator skin from the storm damage.  I decided to replace three of the rivets, which now had to be the next larger size.  I used #4 flat-head rivets and set them with no problem.  While I was at it, I used the rivet gun to straighten the AEX trailing edge stock and the skins against the steel back-riveting plate.  I had to turn the elevator over to run the rivet gun along the edge a second time, completing the task.  I also removed the flaking paint from the affected area of the upper skin.  After buffing with a Scotchbrite pad, I cleaned the area with some paint thinner and applied some spray-can white paint to cover the bare aluminum that had been exposed during the repair.  It is not a perfect paint match, but the repair is solid and should not give me any problems in the future.  Now I have real hangar rash to talk about for those who have not read all about it on these past few web pages. 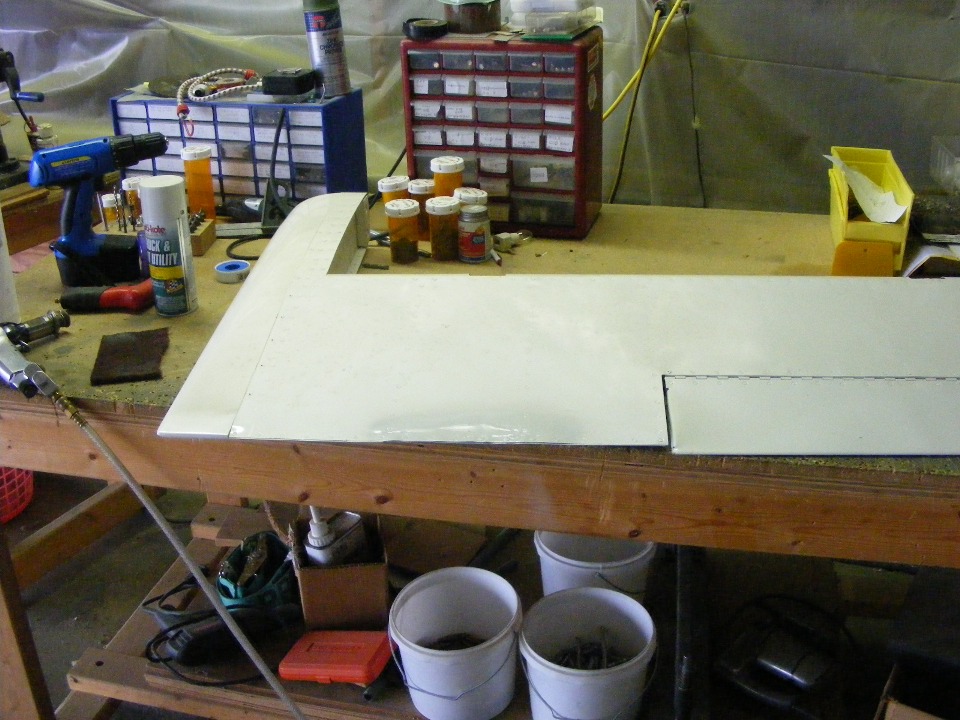 I realized the elevator had not been removed from the airplane since it was re-assembled in the paint shop in 2005.  I did learn a better technique for getting the required number of spacer washers between the elevator control horns and the center bearing on the horizontal stabilizer.  As you can see below, I also checked out the placement of the elevator trim control cable and the VOR antenna cable while I had the fairing off.  The remote magnetic sensor for the Dynon D-10A is still properly secured. 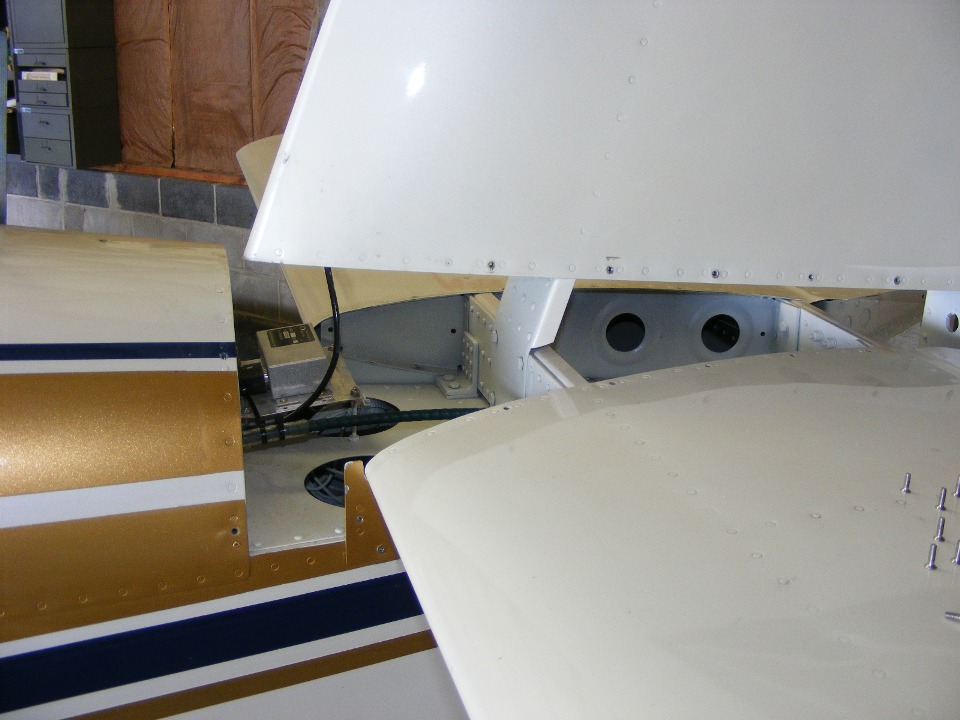 I had Wendell and one of the other Saturday friends, a retired airline pilot, help me with the final bolt connecting the two elevator halves with the elevator push rod.   I was explaining to the retired airline pilot the critical alignment of the elevators with each other and with the horizontal stabilizer to provide an airplane with no unusual trim tendencies.  They both agreed that particular bolt was the most critical on the entire airplane since it insures pitch control of the airplane.  I made sure the AN-10 nut and bolt were torqued to the proper specification.  Remember, this is the way the elevator looked when it was damaged back on April 10th. 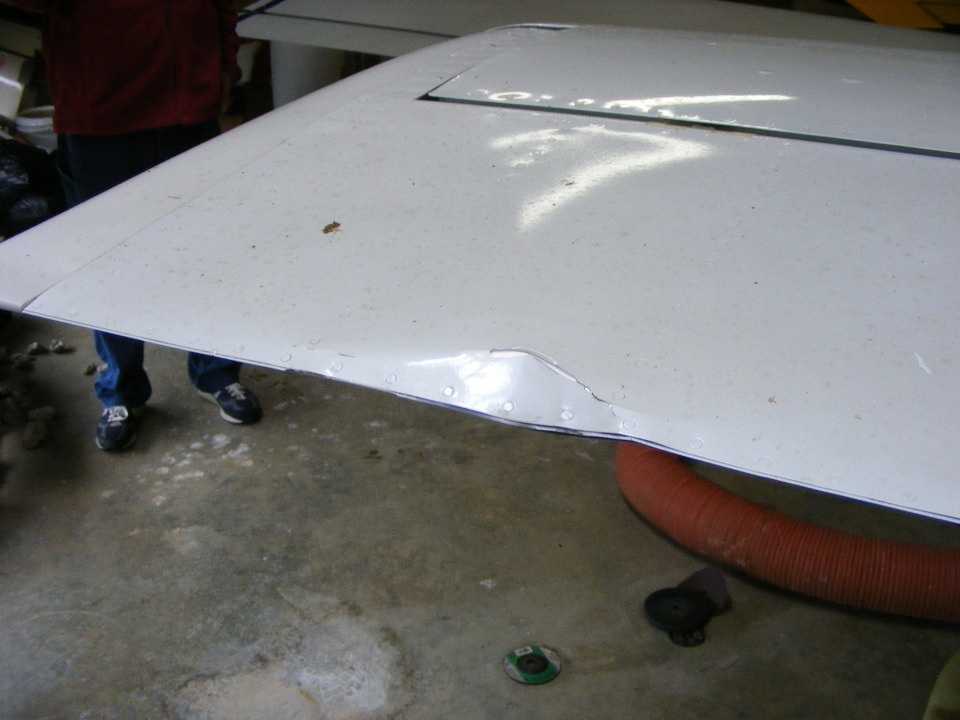 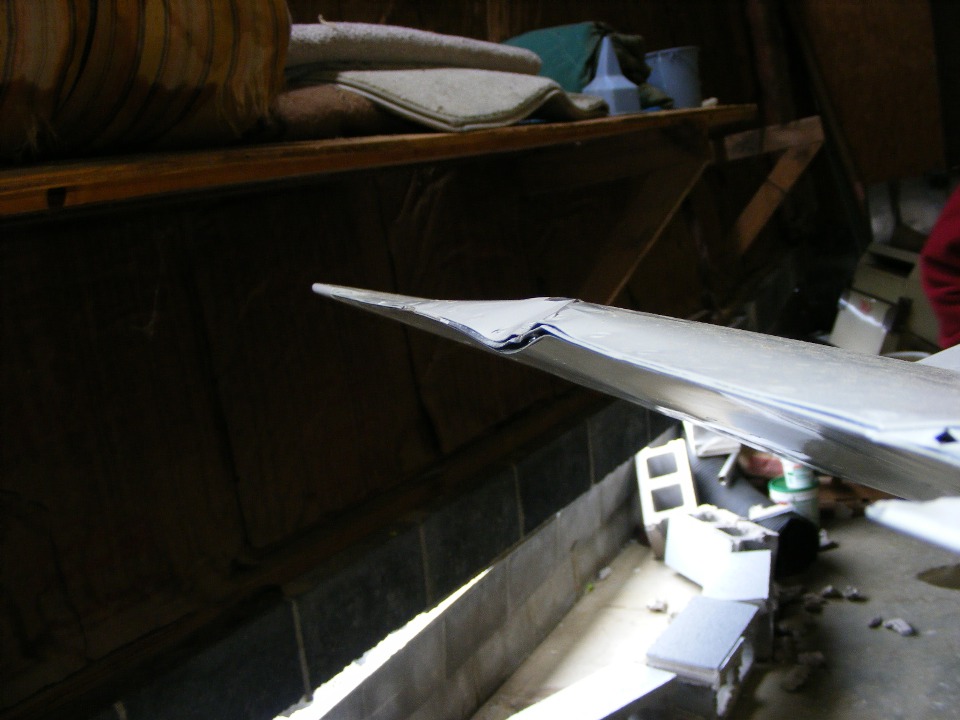 With the elevator repair completed, "Enterprise" is ready for the summer flying season.  I feel good knowing everthing is right with my aviation world again.

May 16, 2009:  Saturday and time to clean the bugs off the airplane.  I also disconnected ALL power going to the tape player/CD player.  I realized it is not being used, so why let the memory circuits drain power from the battery.  That leaves only the memory of the Dynon D-10A drawing power when the master switch is off.  I can see that I need to make some wiring changes to the airplane "one of these days" to make things better for those times when the airplane sits for long periods of time.

May 17, 2009:  I had lunch with my son Marshall in Kennesaw, Georgia on this Sunday.  Then we went to see the new "Star Trek" movie.  The writers filled in the back story on the birth of James T. Kirk and the other core members of his "Enterprise" crew when they all meet at Star Fleet Academy.  When the villain appeared, he altered the time line, and everything you thought you knew about the "future history of Star Trek" went right out the airlock.  What can I say?

As Doctor Emmett Brown said in "Back to the Future" to Marty McFly, "If we go forward in time from this alternate reality, it will be the future of THIS REALITY, not the future as we remember it."  You science fiction, time travel fans know what is going on here.  It gives the new generation of Star Trek writers a free hand in any future scripts, unless of course, in the next installment, they choose to go back in time and prevent Spock's home planet of Vulcan from being destroyed!  Got that?

May 22, 2009:  It is Friday evening before starting a road trip to Florida to see some friends and do the business of my day job at a couple of places down there.  I pulled out my Florida Turnpike toll transponder to check the battery.  It was showing its age with low voltage.  I put in a new battery and it should not give me any trouble while I am down that way next week.  My boss asked me last week if I was going to take my airplane on this trip to Florida.   With the weather raining really hard down there, I am taking my old Caddy.  It still gets better than 25 MPG on the open road, and it can carry more stuff than my RV-9A.   The other good thing about using the big land cruiser, it goes IFR much better than my airplane.  In this case, the IFR means "I Follow Roads" all the time, especially when the weather is (IMC) Instrument Meterological Conditions.

I don't plan to visit any RV-builders on this trip, so this web site will probably not be updated until after I return home around May 31, 2009.

June 6, 2009: A day remembered by military veterans world wide.  June 6, 1944 was a day when the allied military forces began the invasion of Europe in the Normandy region of France.  The rest as they say is history, and there is no chance of changing the time line in this reality.

As for me, I went over to the hangar to clean my airplane which has become dusty in the past few weeks.  It also had some bug droppings in some areas of the wings and tail falling from the rafters of the hangar.  I also noticed that I left out one 6x32 stainless steel screw from the empennage fairing.  That screw was quickly replaced.  The battery float charger was doing its proper job of keeping the main battery topped off.  I had planned to take a flight today if Wendell was back from his vacation, but that is not the case.  It is getting harder to move TWO airplanes when I want to go flying.  Getting them out is no problem, it is putting them back on the upslope of the ramp in front of the hangar.  And yes, my birthday was last Sunday -- number 62.  It was this past week in 2005 when I was in Oregon for a few days to get my transition training with Mike Seager. 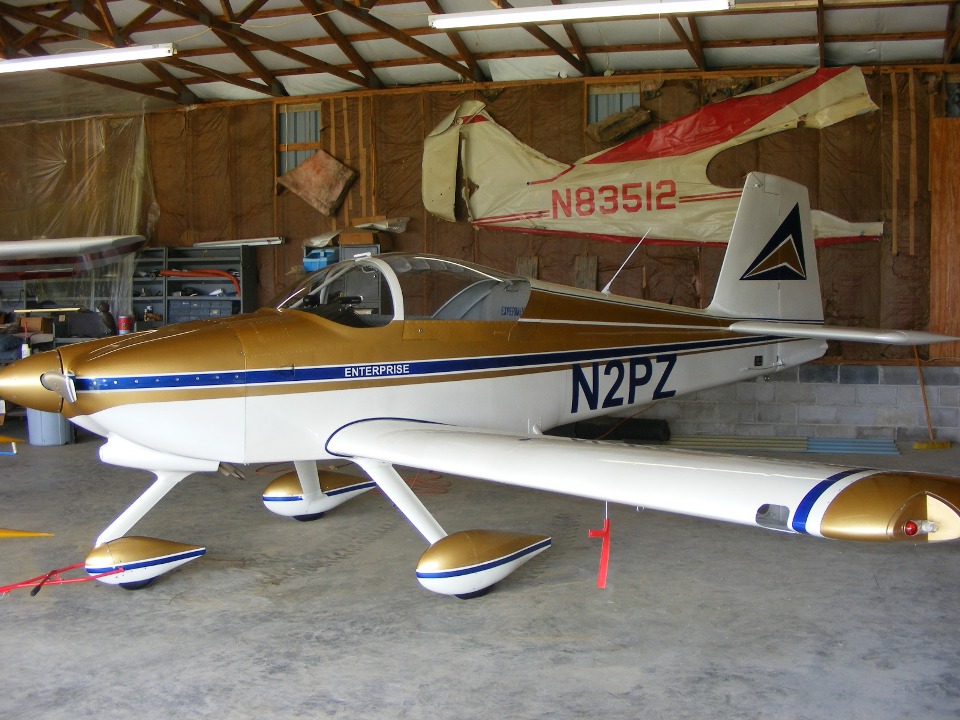 The other birthday coming up on Monday is for "Enterprise" as it will be four years since it was officially pronounced as an airplane from a kit of parts I had assembled in my garage.  Due to my travels and the down time to replace the nose gear fork during last year's annual inspection, the new date for the next inspection is not until the first week of July this year.

And just to follow up with the recent Florida trip, the weather was bad that week as expected.  It was good to keep the airplane at home to insure my travels down there remained on schedule in the old Cadillac.  I did stop by and meet the manager and one other local pilot at the Hazlehurst, Georgia Airport when I was driving southbound.  They urged me to bring my airplane soon and let them know when I am headed that way.