February 14, 2009:  Saturday afternoon was Visitor's Day!  RV-9 builder and pilot Bill Repucci and his wife's father and pilot, Larry Turner stopped by the hangar today.  The Turner family lives near the Collegedale Airport.  Bill and his wife live in North Carolina, to the East of the Charlotte Class B airspace.  Their visit was via ground transportation since they have a new baby and the RV-9 could not hold them and all the stuff needed to travel with a very little one. 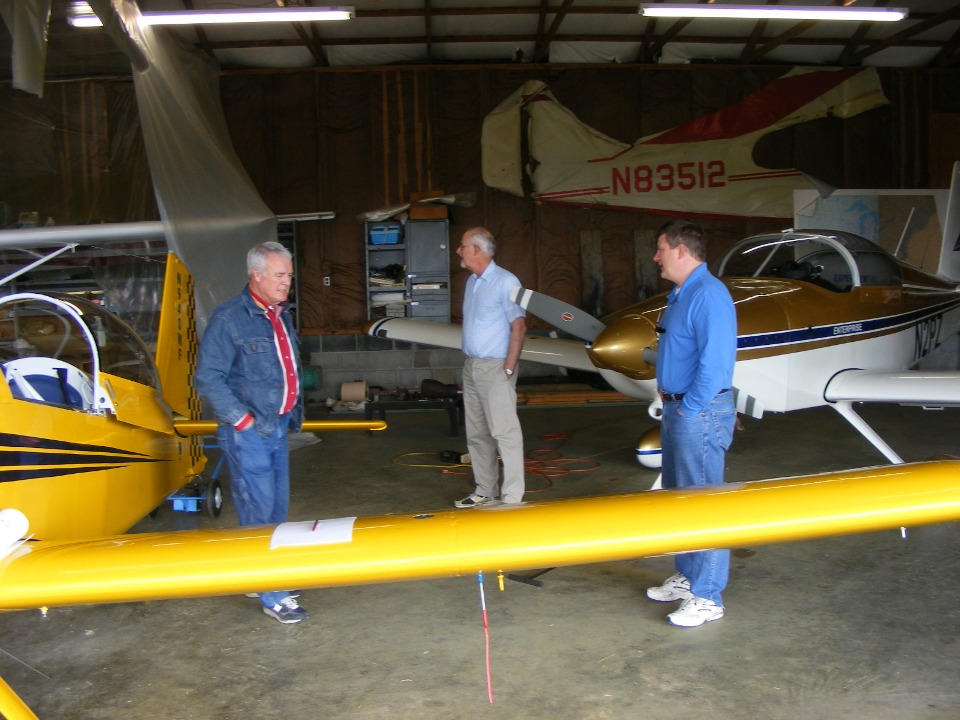 The weather has been less than good with today's overcast skies finally breaking up by mid-afternoon.  The winds were not good for flying, making today's visit a "hangar session" to see and talk about airplanes.  I looked at Bill's web site and found NO pictures of him on his web site, just photos of those who travel with him on airplane trips.  Bill, HERE is your chance to be seen on the web. 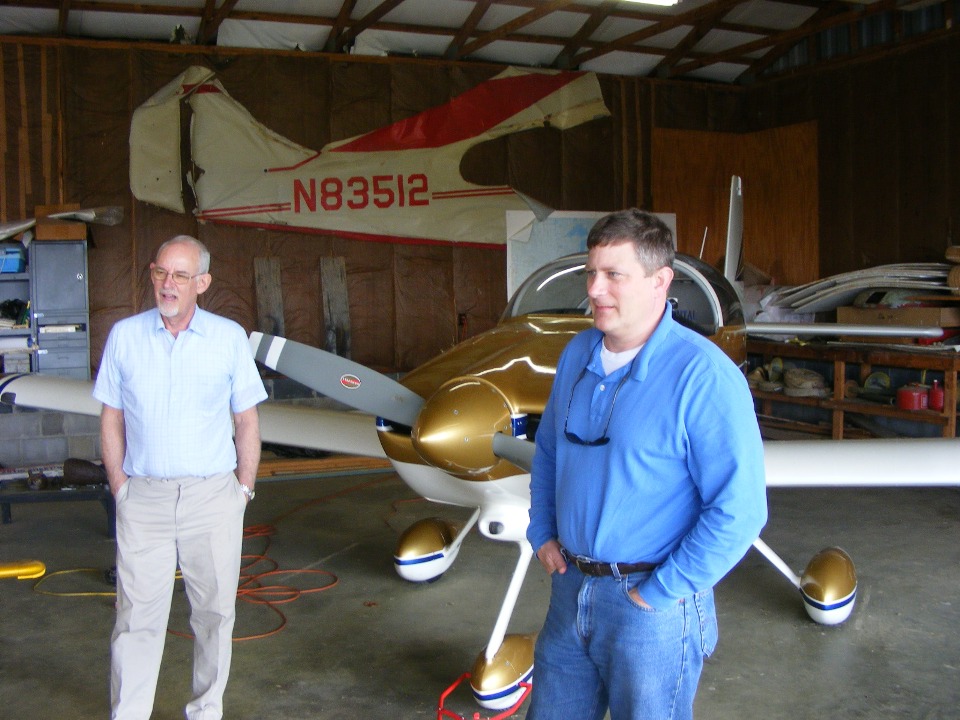 February 21, 2009:  This is another "catch-up day" for my web site.  I posted the entry above this morning and will be heading out shortly for the usual Saturday chores and a visit over to the hangar to see Wendell and check out the winds at the field.  I want to see if he has completed the conditional inspection of his RV-8 and whether or not his A&P friend has helped him with the annual inspection of the Aeronca Champ.

The past week has been business as usual for my day job.  A trip to Florida is again on the schedule for the first week of March.  This time the route will include Tampa, Sarasota, and Orlando.  I may even get to see a few old friends from my days in the satellite industry from the 1980's.

March 15, 2009:  The "Ides of March" are upon us.  March is a time of change from Winter to Spring.  In this part of the southeastern USA it brings cold, rain, and sometimes snow.  I went off to Florida as planned two weeks ago and the trip occurred as planned.  For whatever reasons, my return in time for last weekend did not get me into the air with winds blowing hard, and weather that was not conducive to flights of fancy.  This weekend is one with light, but soaking rains that have abated as of this Sunday morning.  As for the SNOW I mentioned above, it came to the Atlanta area the day after I drove through there heading for Florida.  This is the second time in the last eight years that it has snowed in Atlanta (100 miles south of me) and has not snowed here in the Chattanooga area.   March is indeed a time for strange weather.

The overcast is still outside my window, but I am going to the airport anyway.   Wendell called me with a report about his passive altimeter giving him some erroneous readings.  He recently had his blind encoder checked at a nearby avionics shop and found it to be working correctly and properly calibrated for altitude readout.   He had flown through the Chattanooga Class C airspace this past week before the rains came.  The approach controller told him he was 350 feet off from his assigned altitude.  I will be helping him to get his passive altimeter calibrated to match the blind encoder that reads out on the front of his Garmin GTX 330 transponder.  Between the two airplanes, we have SIX altimeters.  There ought to be a way to find the ones that are mis-calibrated.  And as always, any trip to Folks Field always has a stop by Walmart on the way home to get the usual staples that are running low around the house.

I spent this morning watching a tape of "House" I made a couple of weeks ago.  I had a problem with an older VCR that I had put on the shelf last year.   It seemed it just needed a "long rest" to clear its "brain" of internal tape sensor readings, etc.  When I recently sent the "new" VCR/DVD combo unit off for warranty service, I got this unit out of the closet expecting it to only be a video routing source to connect to the video output of my Comcast digital cable box.  Being the old "cable dog" that I am after 37+ years in the industry, I have an interesting TV arrangement in my living room.  The complement of ONE 25-inch analog television set, that can get signals from two different VCR's and a cable TV digital converter box, makes my viewing options better than the average viewer.   Anyway, last night I started to watch the epsiode of House that I missed earlier when the out of the closet VCR again "locked up" and promptly shut itself off.   It occasionally has a problem with fast forward, back, and pause actions in rapid succession.  It then thinks the tape is jammed and shuts down.  I unplugged it before going to bed and found it had cleared its foggy "brain" when I plugged it in again this morning.  It went through a self-diagnostic routine upon application of AC power to the unit.  At the end of the diagnostic routine, the unit ejected the video tape that had been locked inside last night.  All is normal again.    I finished watching the tape of "House" and came up to enter this blog.  With any luck, there will be a non-flying airplane photo and maybe a "spring" blooming photo added to this web site today.

Sunday afternoon: Here are the photos I promised with Spring already being felt a week before the first official day of spring.  This is the entrance to what was at one time the Holiday Inn - Southeast for Chattanooga.   There is a satellite dish way down there behind the white truck.  The foundation was put there by my field service folks back in the early 1980's.  The original C-band dish was replaced with a Ku-band dish later on when the contract changed hands.  These trees are common in this area and bloom with these white "flowers" just before their new leaves come out.  The white spots on the asphalt are the flower petals that are starting to shed from the trees.  The overcast sky is still a solid blanket of clouds. 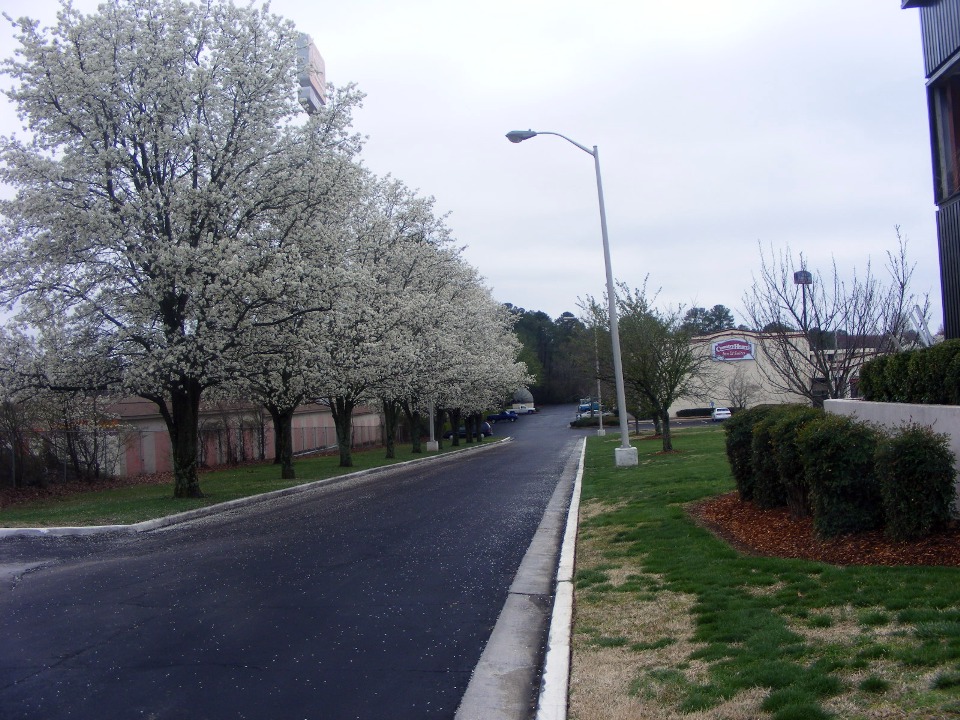 When I got to the hangar, Wendell was trying to put in a mounting adapter for his Garmin GPS 396 to tilt it up for better viewing.  Here he is using his dremel tool to open up a bit more space in the panel at the bottom of the radio stack.  I also had him checking his encoding altimeter, the panel-mounted passive altimeter, and the Dynon D-10A which also has an altimeter in it. 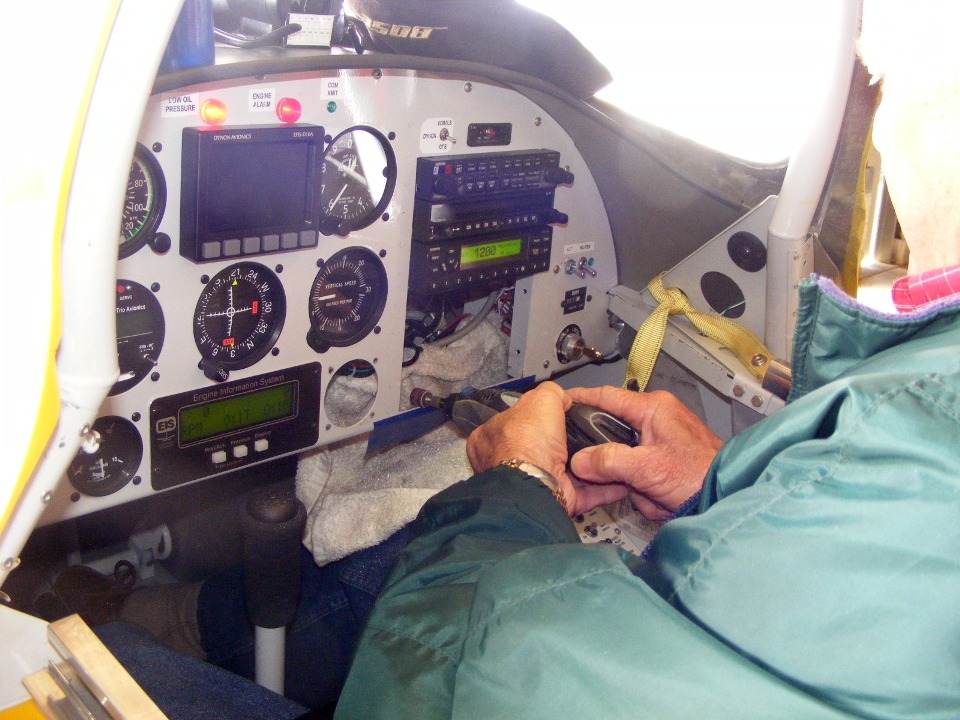 The Aeronca Champ has recently completed its annual inspection and waits for some final cleaning before the cowl goes back on. 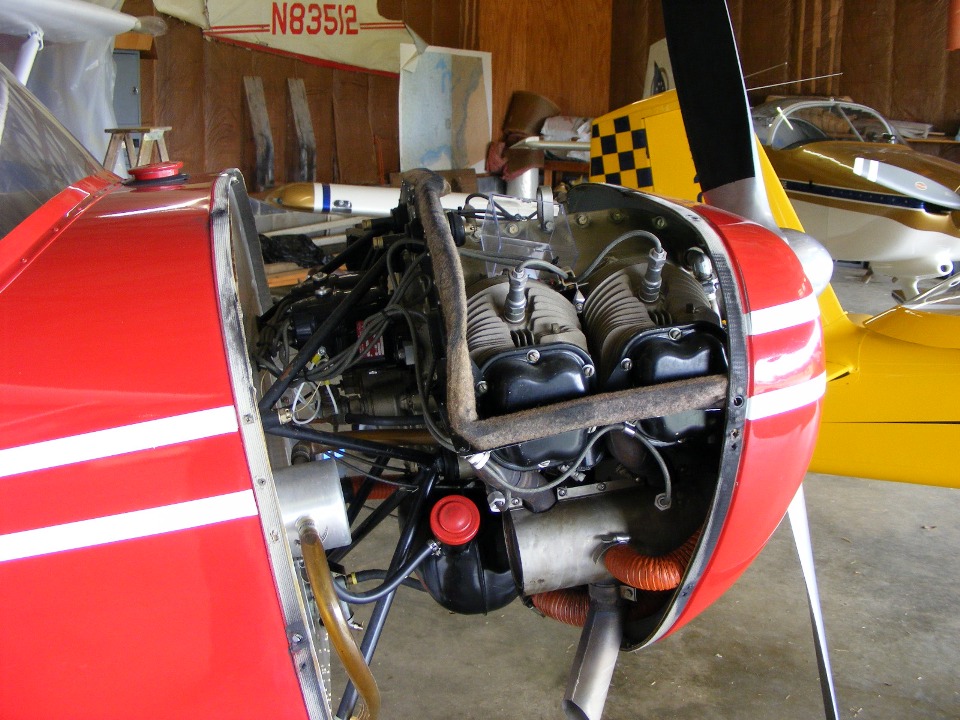 The neighbor from across the runway has brought over an additional tool for Wendell to put in his Dremel unit. 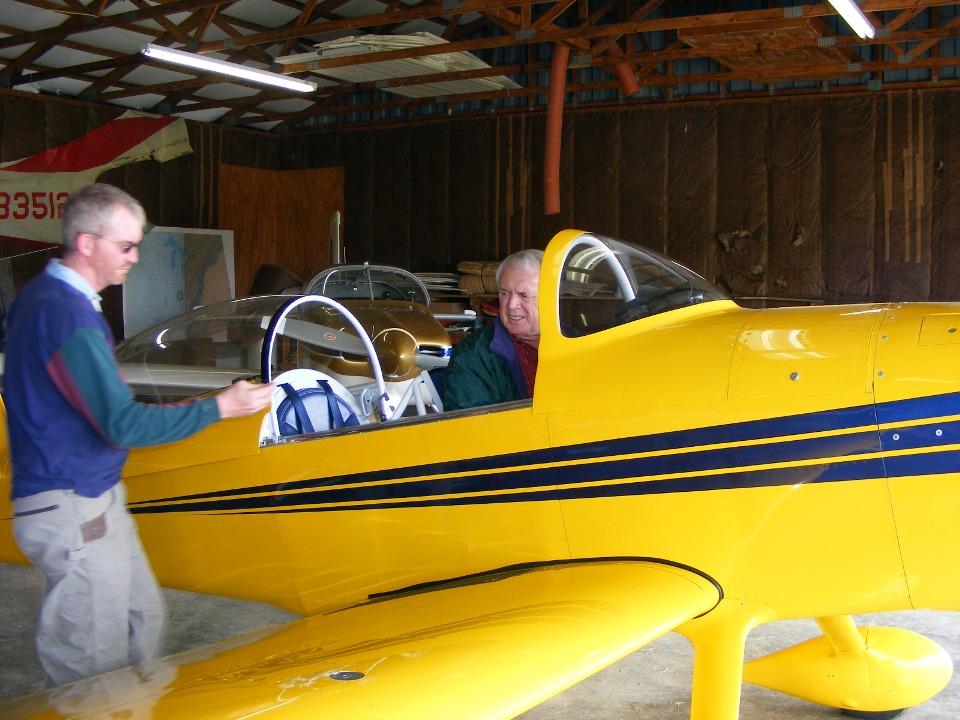 I was glad to see the weather starting to break up even if it was just for this afternoon.  There are some blue patches in the overcast out there coming in from the southwest. 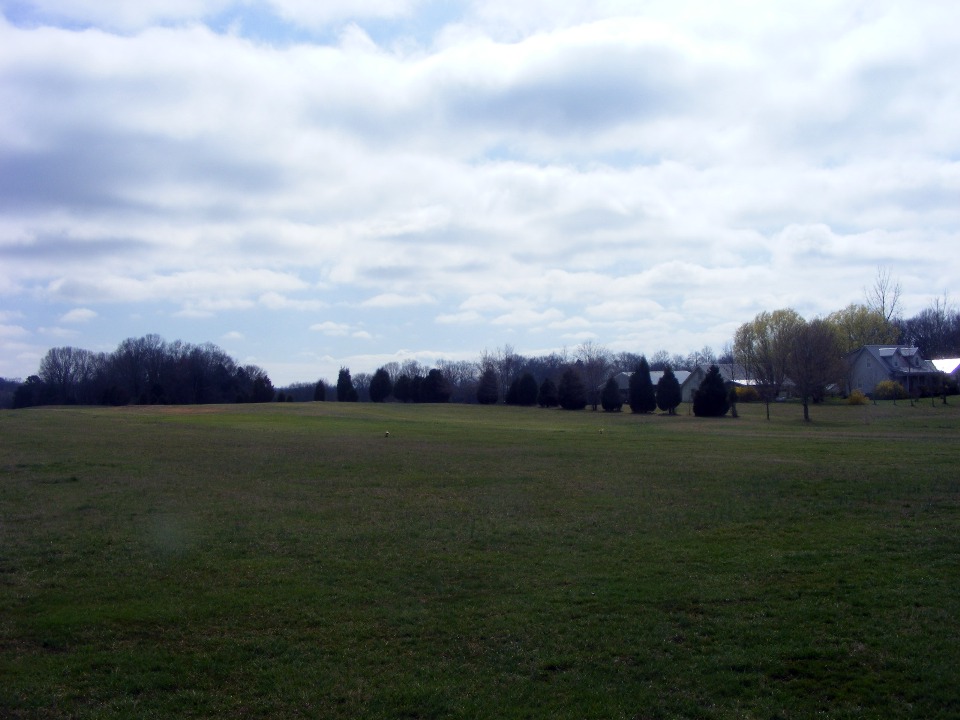 I helped Wendell with the radio stack issues.  We even tried to chance the sequence of the stack to put the GPS at the top of the stack.  We quickly re-discovered why the stack is made up in this sequence.  Space behind the panel is very tight.  I placed the GPS panel mount kit in the correct position and marked where the two top mounting screws need to be attached to the mounting rails.  It looks like this arrangement will work to provide better GPS visibility in the cockpit. 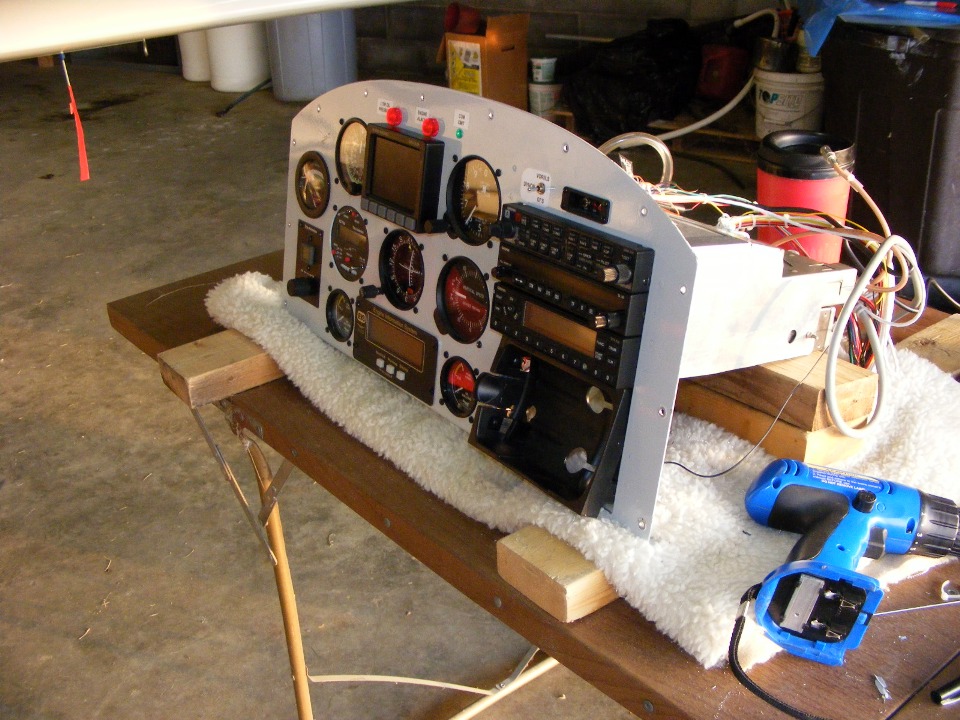