November 16, 2008:  We continue the flight over the Ocoee River and Cherokee National Forest with Monte and Darlene.  Did I mention this is the first time Darlene has flown in an RV or any small single-engine general aviation aircraft?  She is also not used to seeing snow since they live in South Florida near the Atlantic Ocean.  The red and blue knobs from my throttle quadrant are seen reflected from the canopy at the bottom of this photograph. 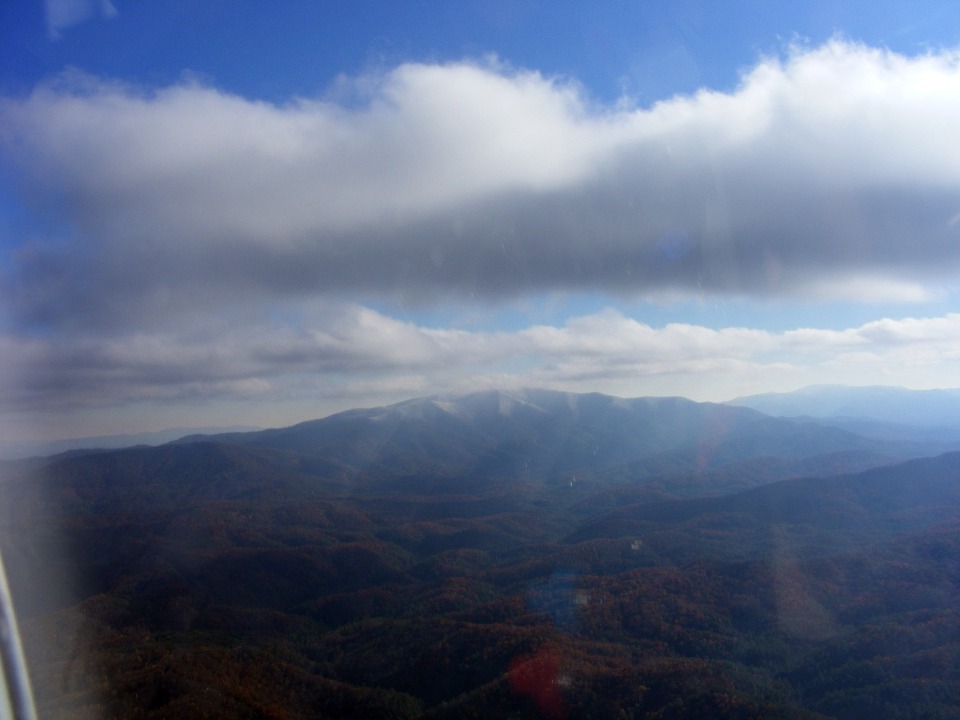 I banked the airplane to give Darlene a good view of the river which is now beginning to show the rocks and boulders now that we getting near the end of Parksville Lake. 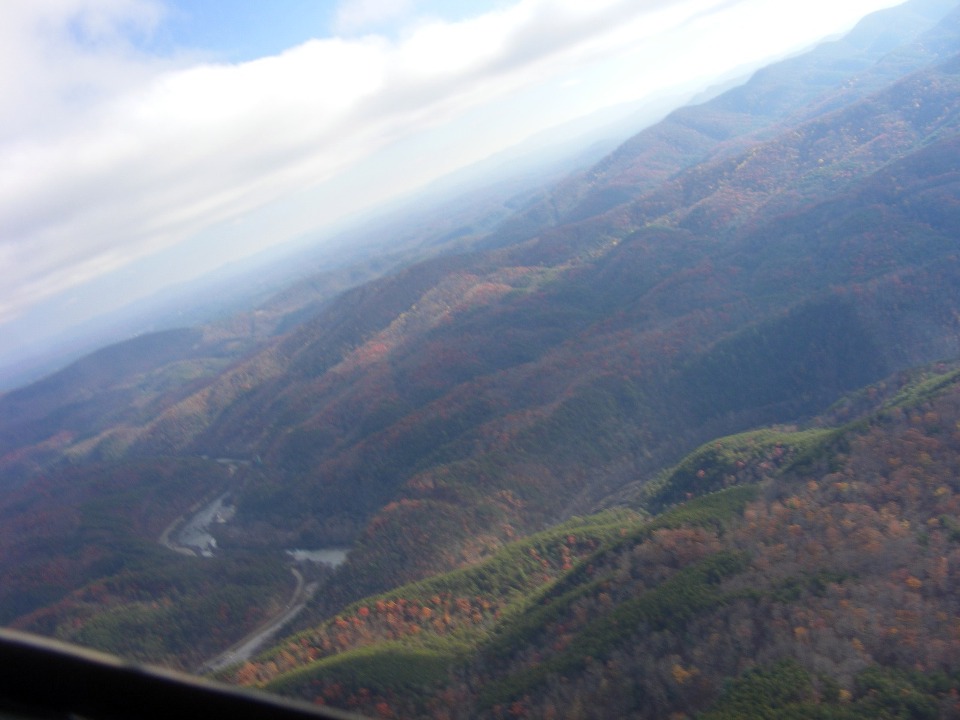 Here is the power house I mentioned in the ride taken yesterday.  US 64 is four lanes here for a short distance approaching the 1996 Olympic Whitewater site a bit further upstream. 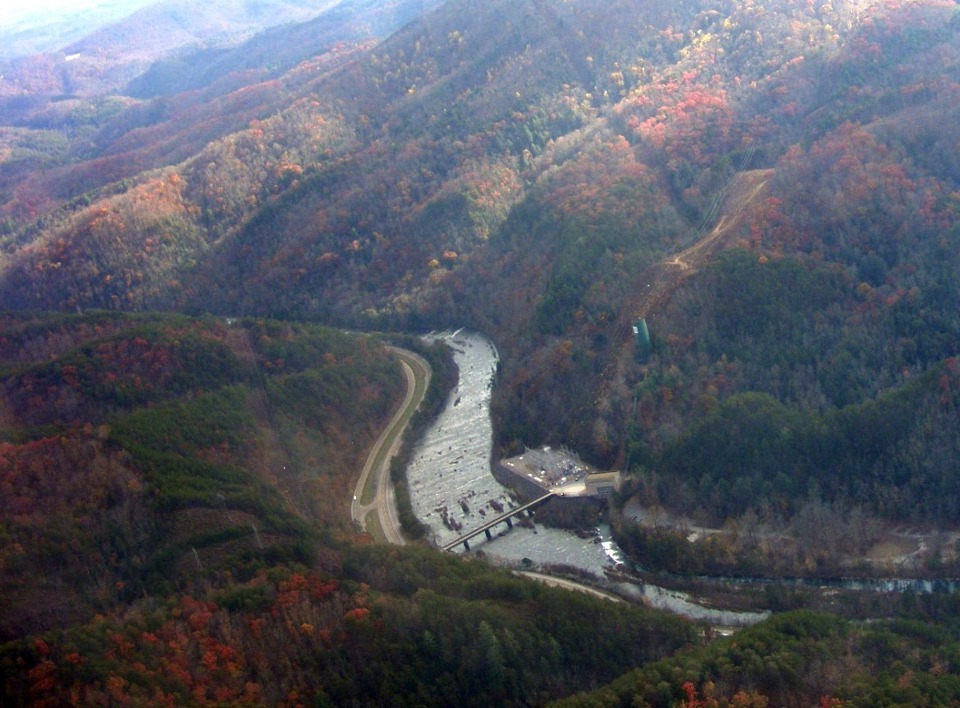 This shot shows the rocks and boulders in the river when the water flow is reduced as it is at this time of year.  When the water is up in the rainy season, this area is prime river rafting territory. 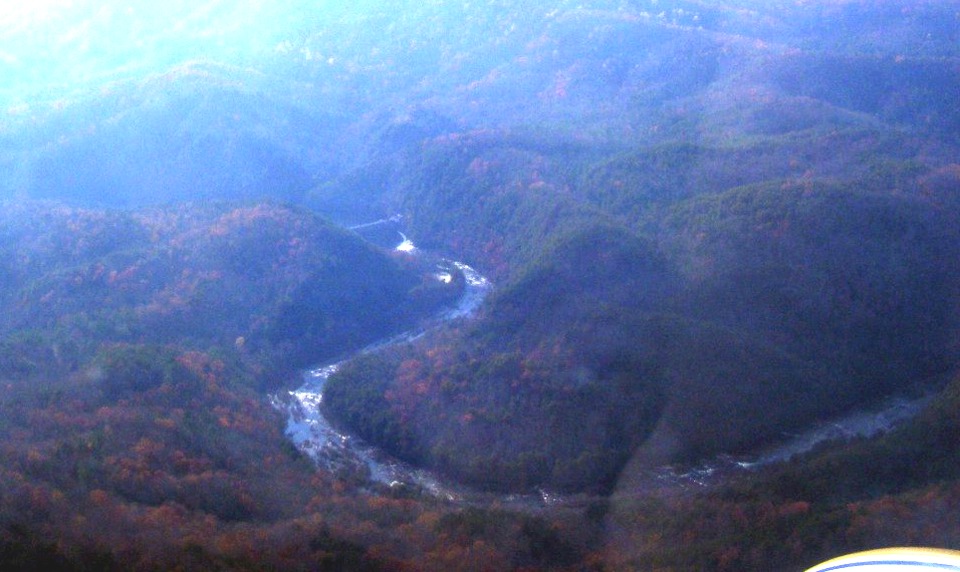 This is the same bend in the river seen looking west and in a full wide-angle shot. 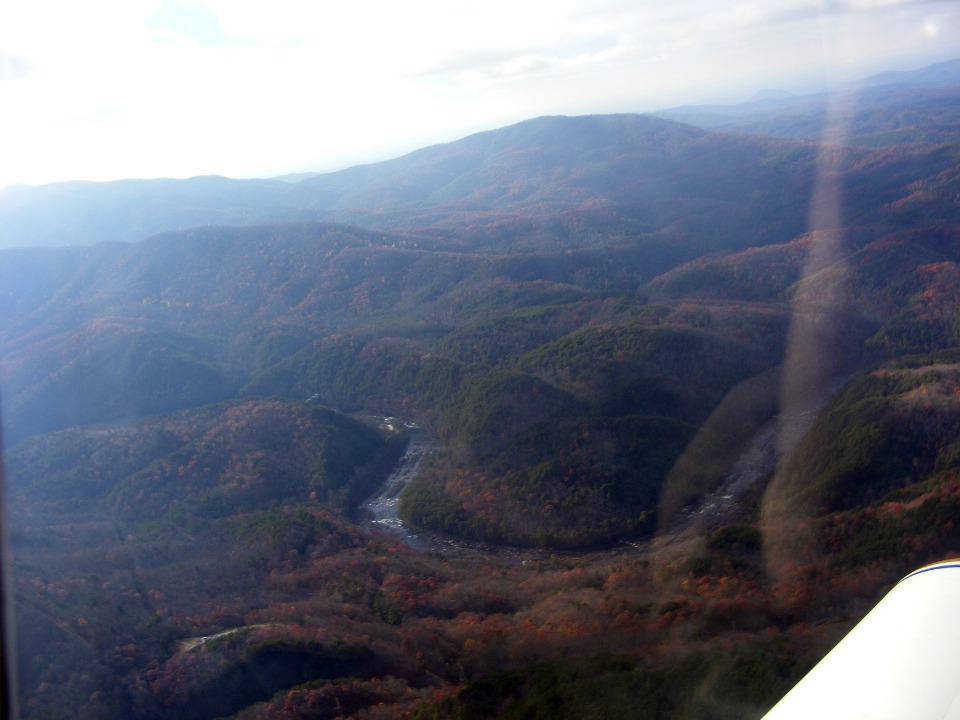 We went upstream to the upper dam on the Ocoee River.  This is the one that controls the water flow through the Olympic Venue area. 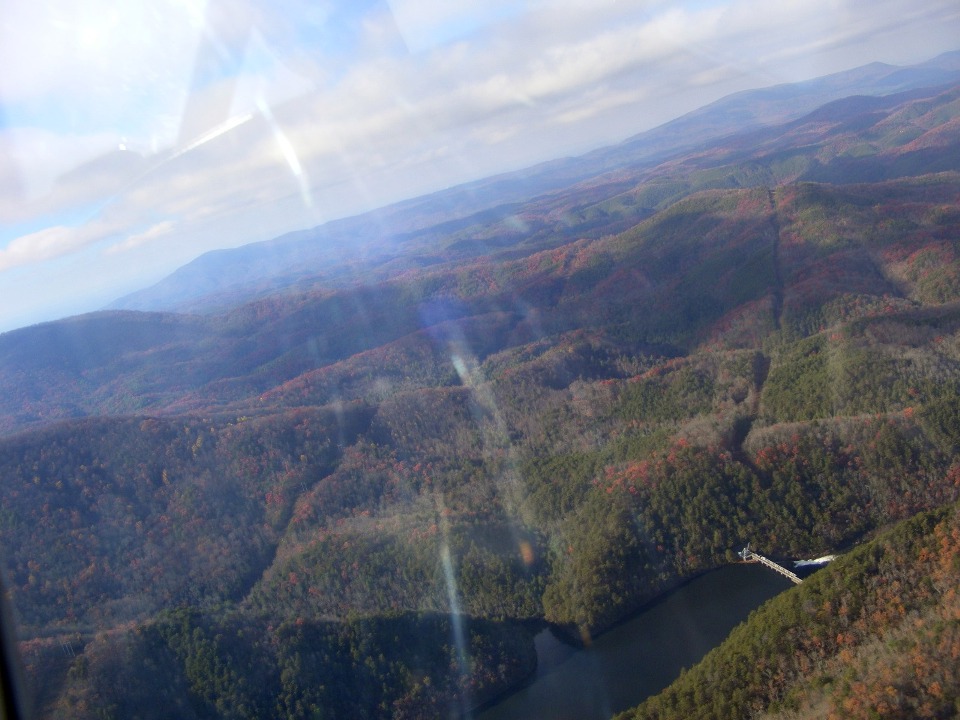 This high-resolution photo is cropped from the one above and shows the dam "close up" for more detail. 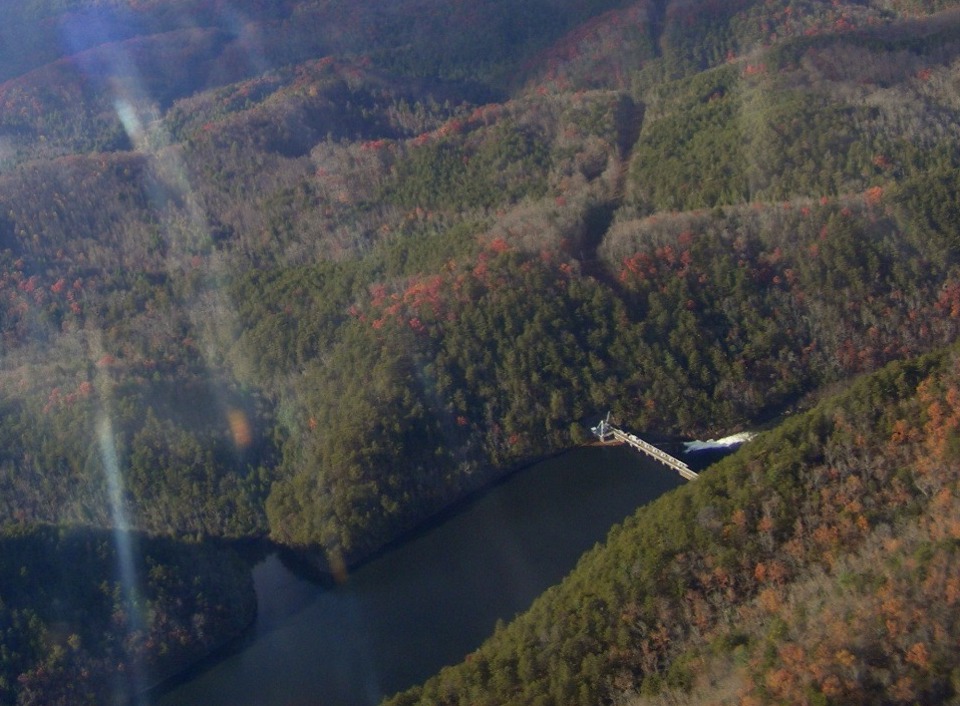 Here is one more wide shot of the dam as I continue the banked turn back toward the whitewater competition area. 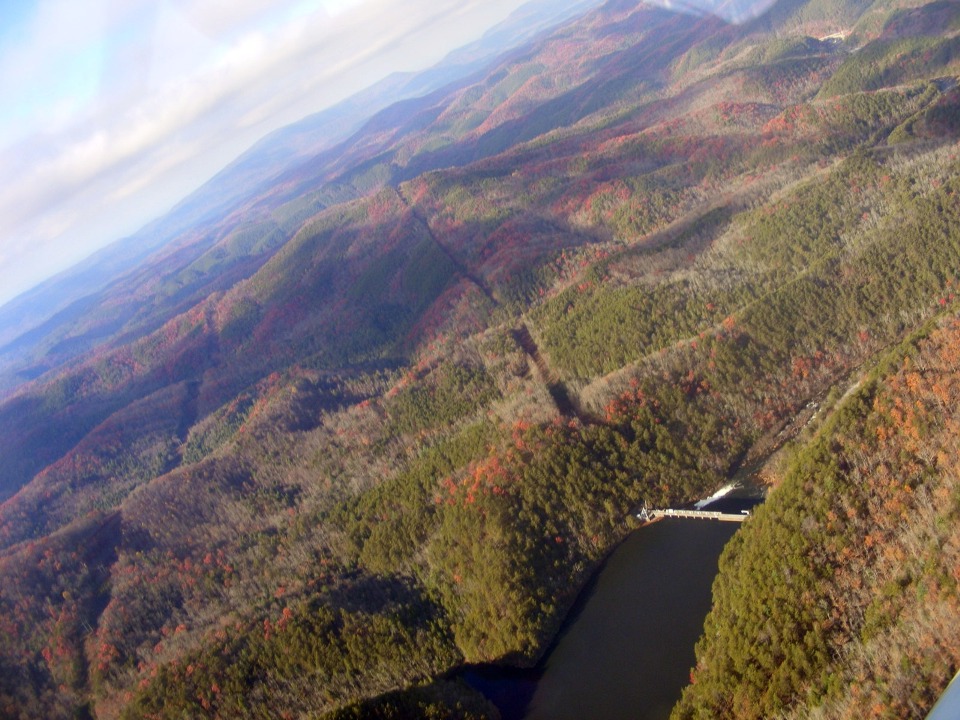 We completed the turn over the dam and headed back to the north west.   This is the parting shot of the Olympic Venue area we visited yesterday to get souvenir post cards for Darlene and a hat for Monte.  The ranger station and gift shop are in the building with the RED ROOF between the river and US route 64 at the bottom center of the photo below.  This is the last point heading eastbound along the highway where motorists can see the Ocoee River. 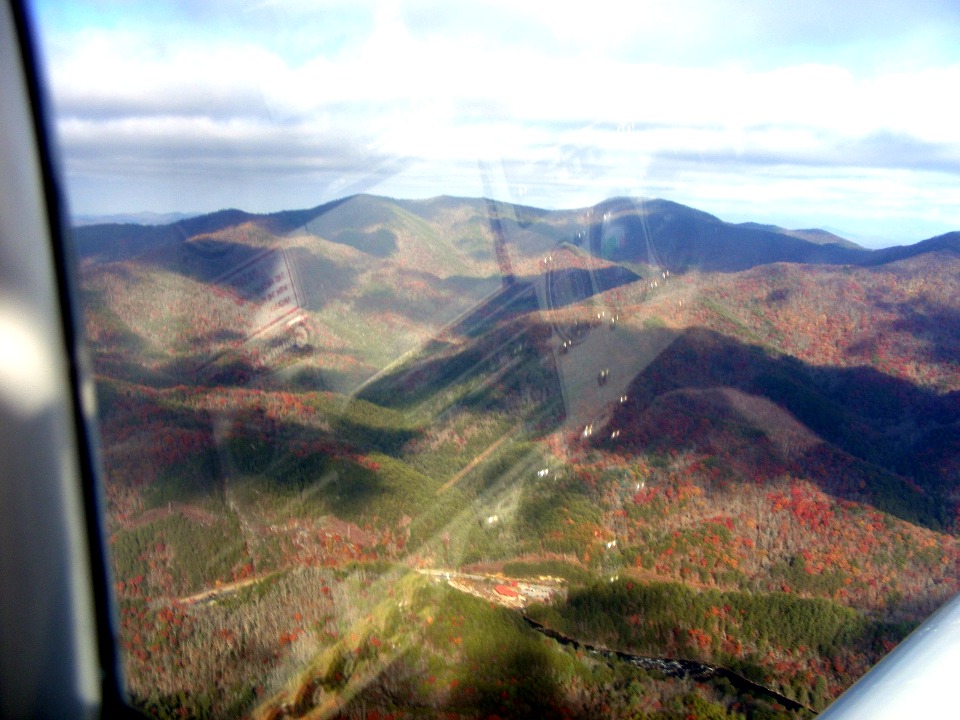 This is the last photo taken looking NE as we fly NW toward the Tennessee Valley to continue our path following US 411 north toward Knoxville, TN.  We came into this area following the Ocoee River.  Our departure is along the route of the Hiwassee River where it cuts its own path to the Tennessee River.  I did not realize the gap in the hills I had chosen until it was too late to take any photos of that river. 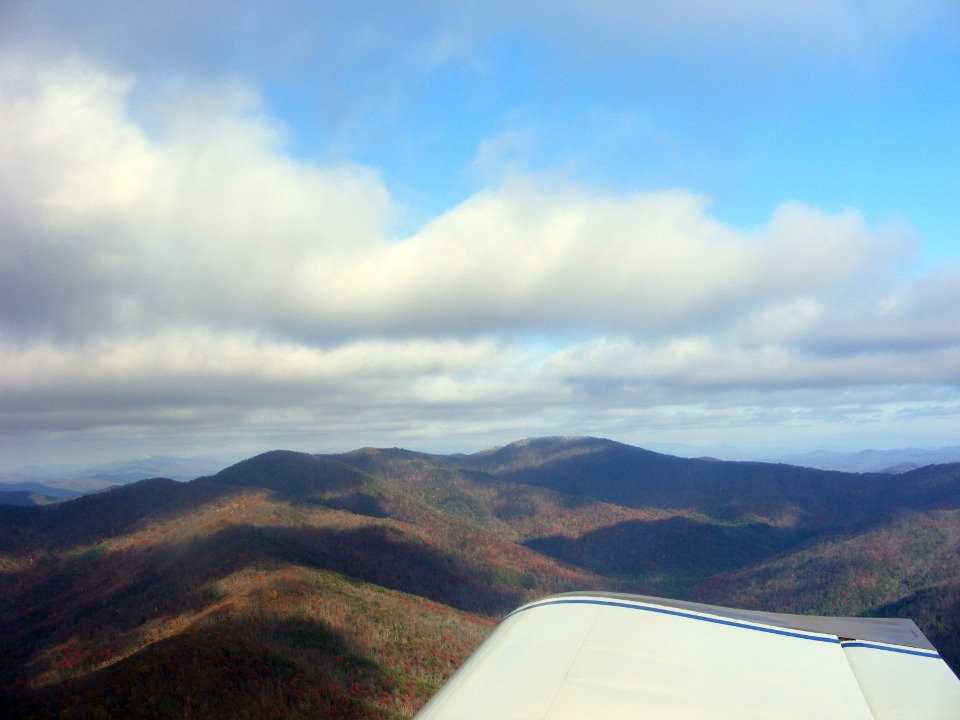