September 21, 2008:   The topic today is "Soaring Beyond Mediocrity" at the Oakwood Baptist Church in Chickamauga, Georgia.  If you go to their web site, you can click on the "WATCH" button near the bottom of the home page to see the sermon from last week with the first video as part of the Sunday morning church services.   In coming weeks, the new videos will become part of the video archives.  It is a six-part series.

On the day Wendell's RV-8 was first flown, it was blessed before takeoff by his minister, Darrell Henry.  From that day, the idea to do an aviation-related inspirational series of videos was born.  The first scene was shown last week with a depressed young man whose father (a pilot) recently passed away.  The young man is distressed about the declining value of the airport he inherited from his father.   The video production crew worked in Wendell's hangar on the scene that was featured at the beginning of this week's sermon.  The scene shown today has Wendell playing an older airplane mechanic who is working to restore the deceased father's old airplane and advising the young man about "life's nuggets" for living each day, rather than giving in to depression.

Here is the way the stage in the church sanctuary is decorated for the duration of these inspirational messages.  The light sport airplane does fill the front stage area.  That "hangar" in the background is a series of corrugated metal panels to create the illusion of a metal hangar.  The two airplanes inside the "hangar" are on a billboard-sized photo of the interior of Wendell's actual hangar.  His Aeronca Champ is on the left side and my RV-9A is on the right side of the huge photo. 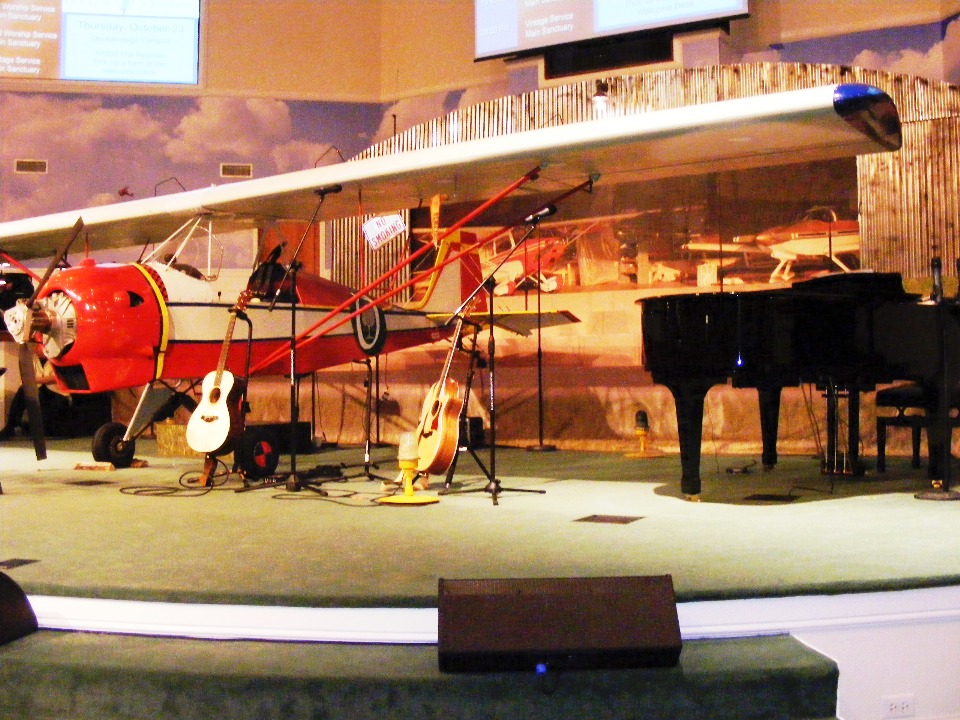 This is the view from the rear of the auditorium. 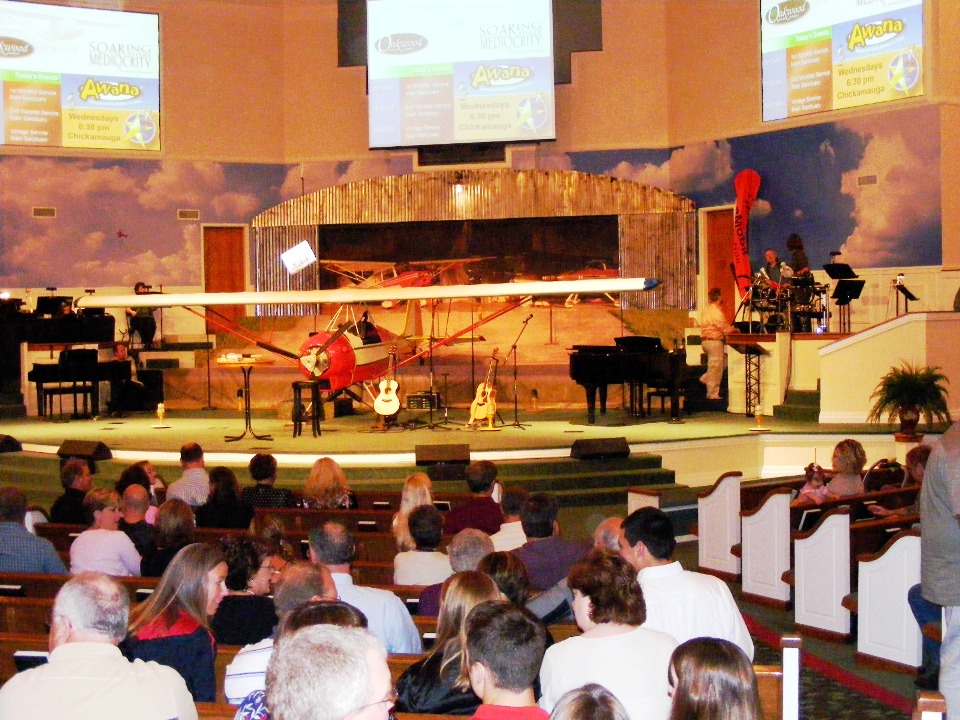 Three large projection TV screens are above the stage and are used throughout the services. 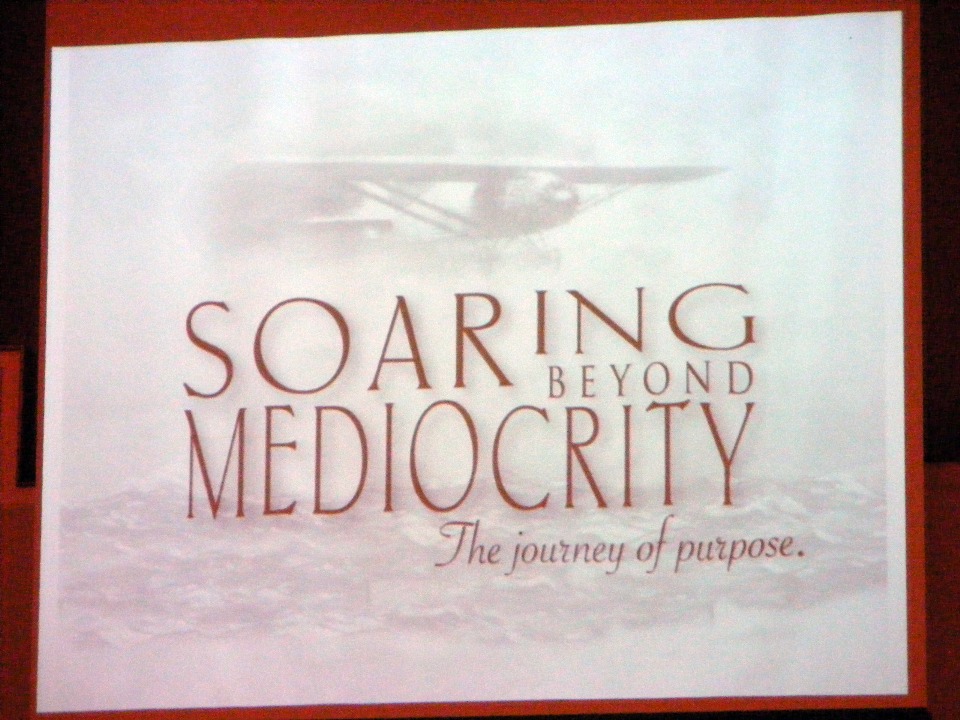 The minister came out to introduce the video segment wearing a US Air Force uniform jacket and carried the hat.  The uniform, hat, and the airplane on the stage belong to church member. 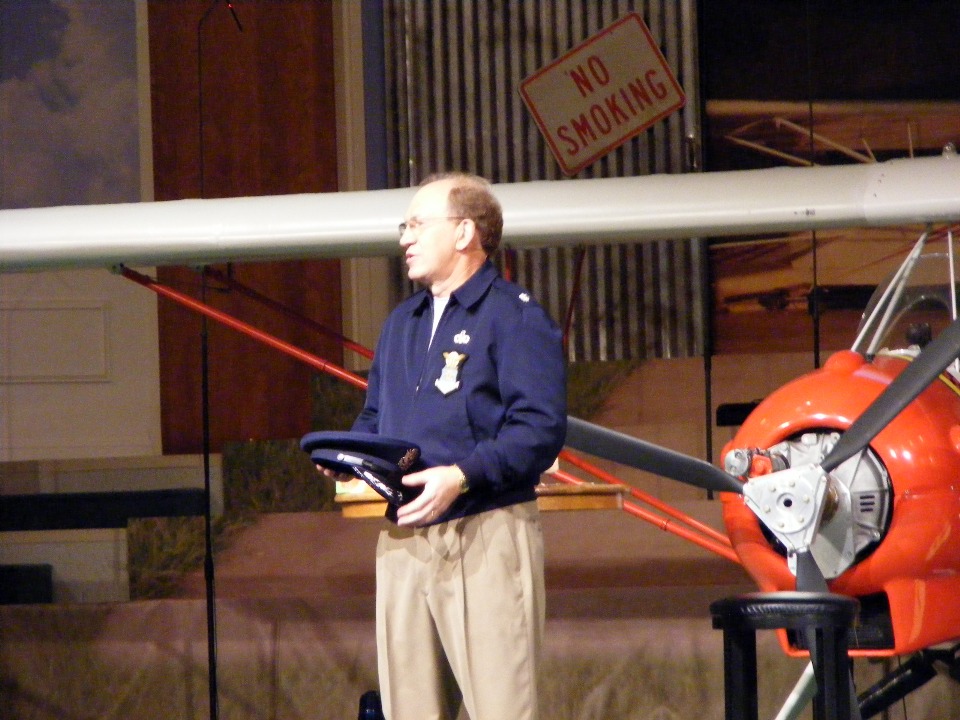 I moved up on the stage after the service and took this photo from the left side of the stage. 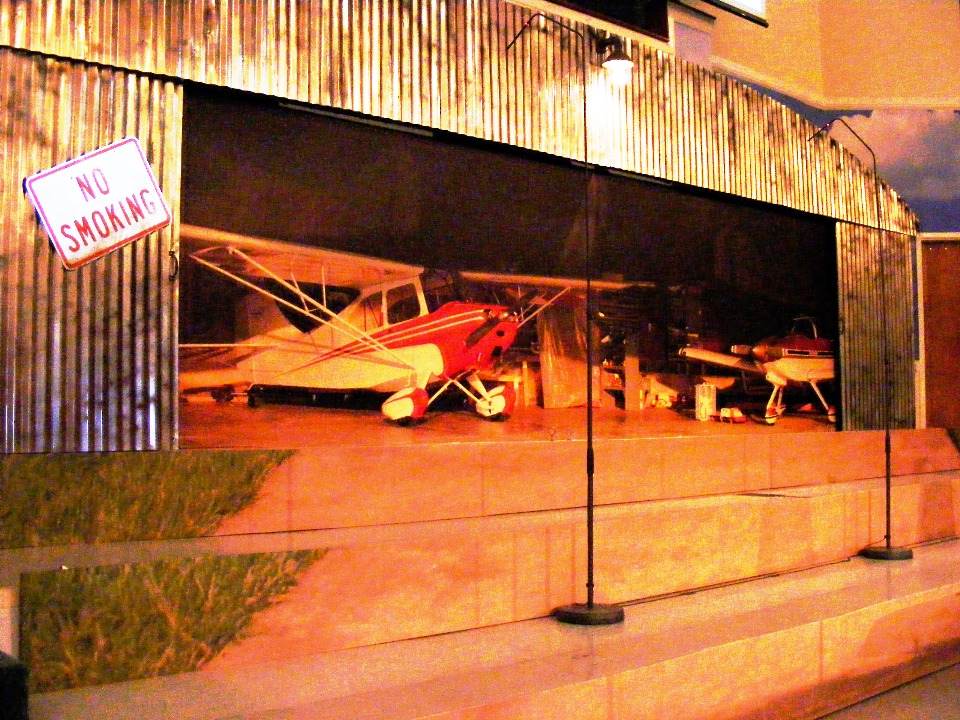 Here is the view from the balcony.  From this vantage point, you can see where the choir stood on the risers between the stage and "hangar" back drop at the rear of the stage area.  You can also see how the "photo of the hangar" ramp and grass apron was cut and applied to the front of the riser platforms for the singers. 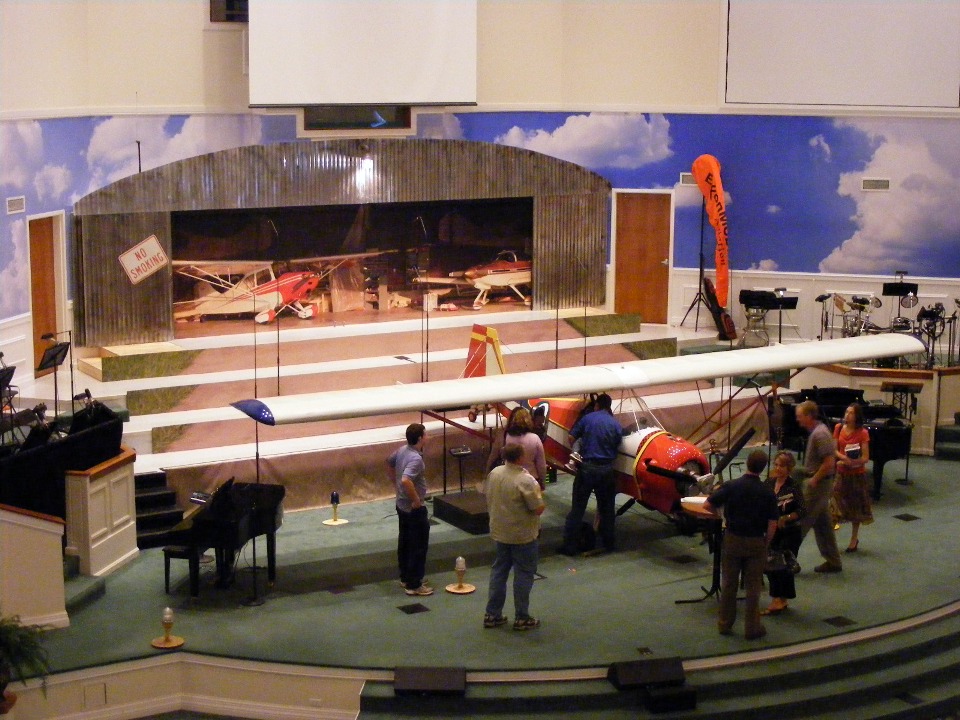 September 28, 2008: It was a beautiful Sunday, but I had chores to do today and did not get out of the house at all.   I spent the afternoon online catching up on web site maintenance to THIS web site, and working the Van's Air Force forums to help out some new builders with photos and explanations from my RV-9A web site.  That was how I found some things that needed correcting on my web pages.

Yesterday was filled with low overcast conditions.  I drove out to the Collegedale Airport to pay my recent fuel bill, and to visit with Rich Nadig to check on his Rocket project, and take a few photos.  I have posted the photos I took and the story on his NEW PAGE 3.