August 16, 2008:  The weather near Chattanooga was marginal, but worse near Atlanta, so I postponed a flying trip down there until tomorrow.  The weather was good enough for Wendell to give flights to some local boys whose parents did not tell them they would get to fly until they arrived at the airport.  Wendell rolled out the low and slow Aeronca Champ to give the rides to these brothers, one at a time. 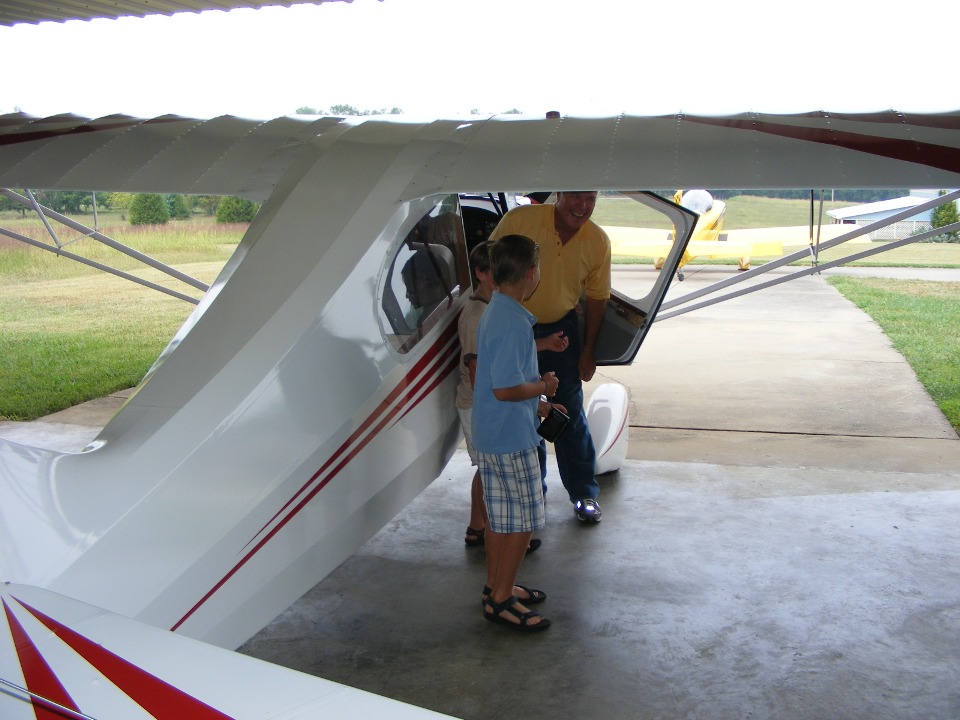 This is near the end of the first flight when Wendell made a high-speed pass to get the passenger enthused about flying.  The overcast conditions created a slow shutter speed on my digital camera, adding a little blur to the fast-moving Champ as he pulled up in front of the hangar. 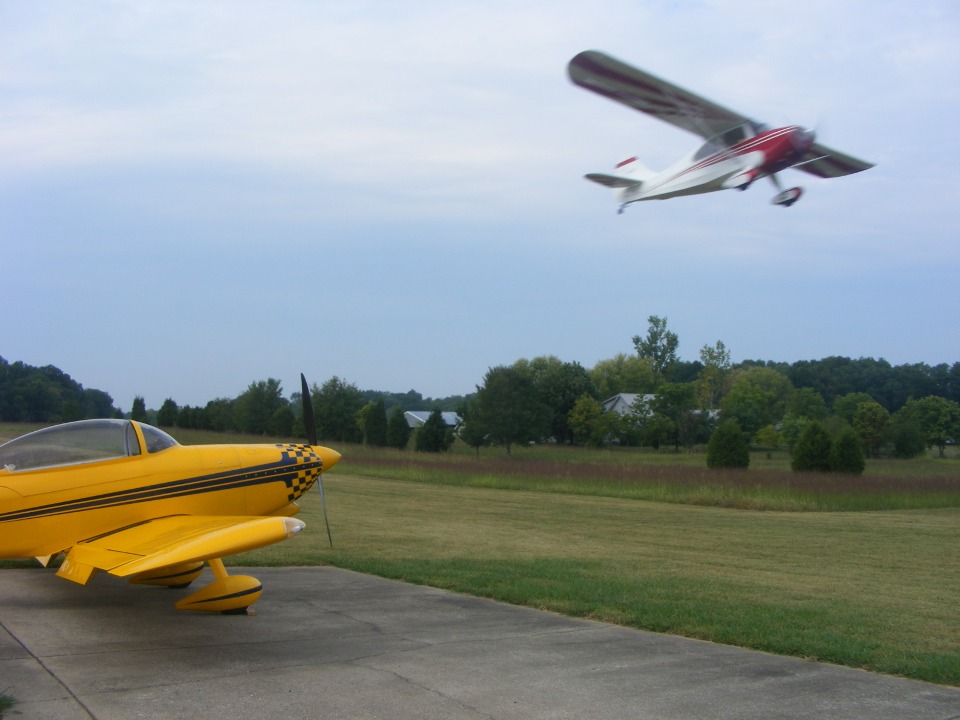 I caught this picture at the end of the second flight as Wendell does a side slip over the wires at the north end of the runway. 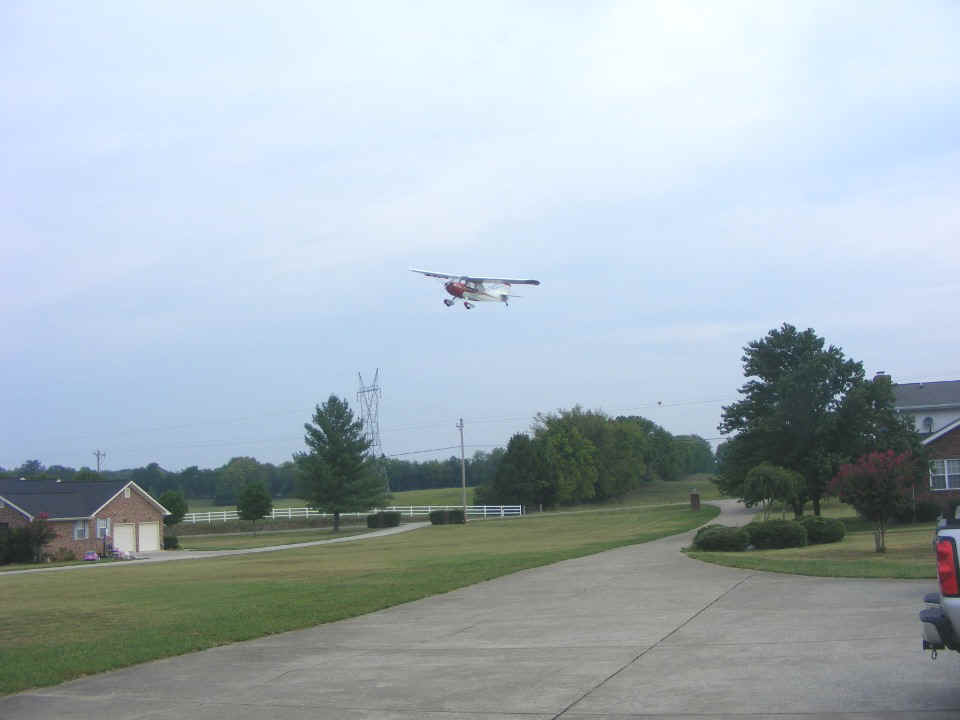 Back on the ramp, the engine has just shut down before opening the door to let out the other brother. 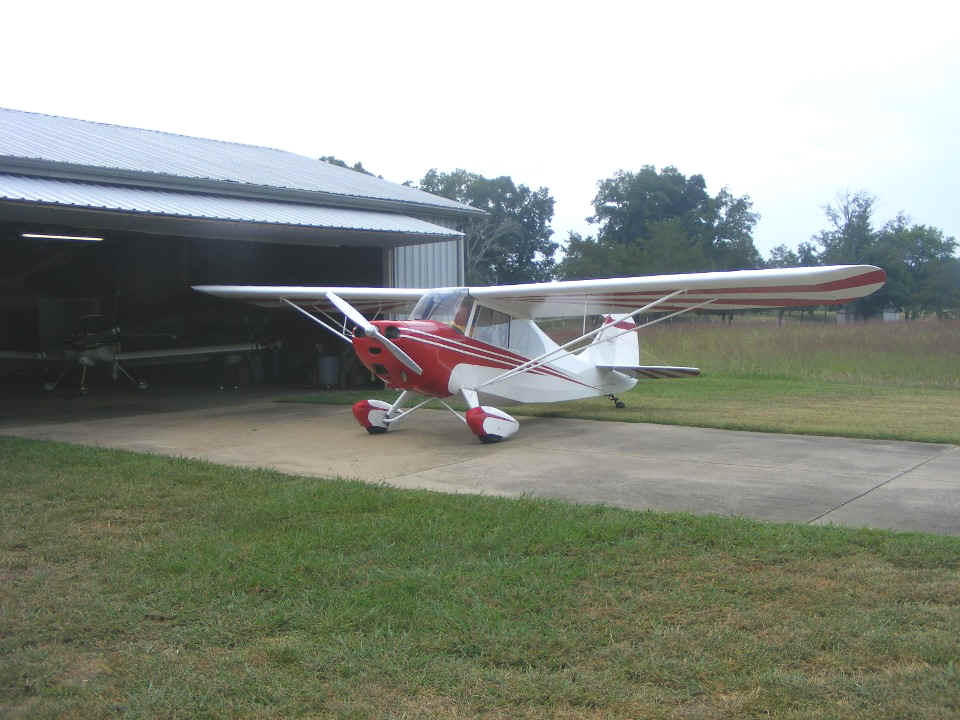 These brothers get along just fine as they pose for my camera.  Their parents and grand parents are lined up beside me getting ready to take snapshots to remember the day. 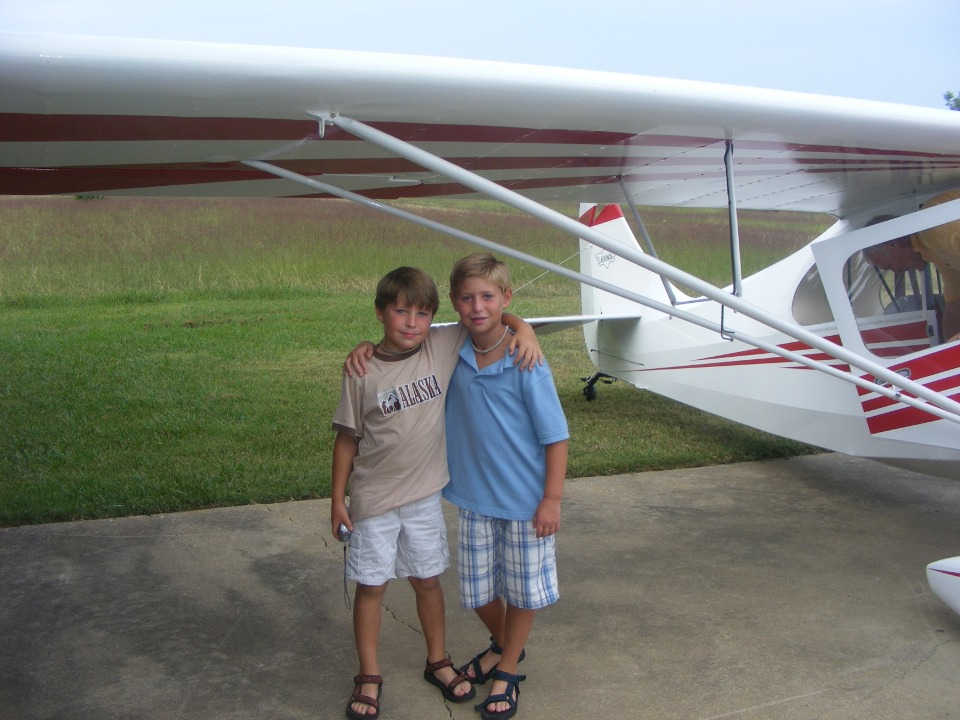 Wendell gets into the photo for me as the boys turn to face their family for more photos.  I provided the EAA Young Eagles forms and certificates for the boys.   Wendell signed them since he was the pilot. 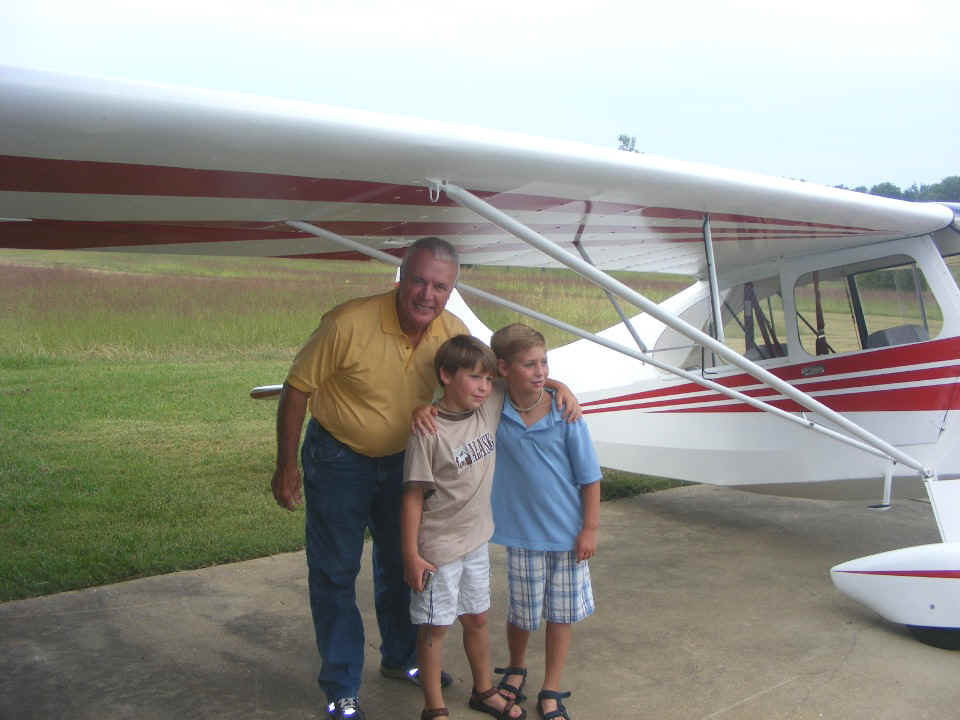 By this time on Saturday morning, the Wendell's friends showed up as the family prepared to leave.  I had already made my usual presentation to the family and the boys about the different types of airplanes - tandem seating vs. side-by-side, and all aluminum vs. steel tube and fabric airplanes.

Since I was not going flying today in my airplane, I headed out for a little exploring of the local area by car.  The local PBS channel in Chattanooga had recently shown a story about a little tourist town in nearby Mentone, Alabama.  I punched in a command to my GPS to take me there via the shortest land route and I was off passing through the nearby town of Chickamauga, Georgia and various county and state roads just following the GPS route.  The rain showers along the way proved my choice of staying on the ground to be correct.  I passed this public park on the west "brow" of Lookout Mountain on the north side of the town of Mentone.  This place is made for picnic outings with its two covered sheds, plus other open-air picnic tables and fire pits. 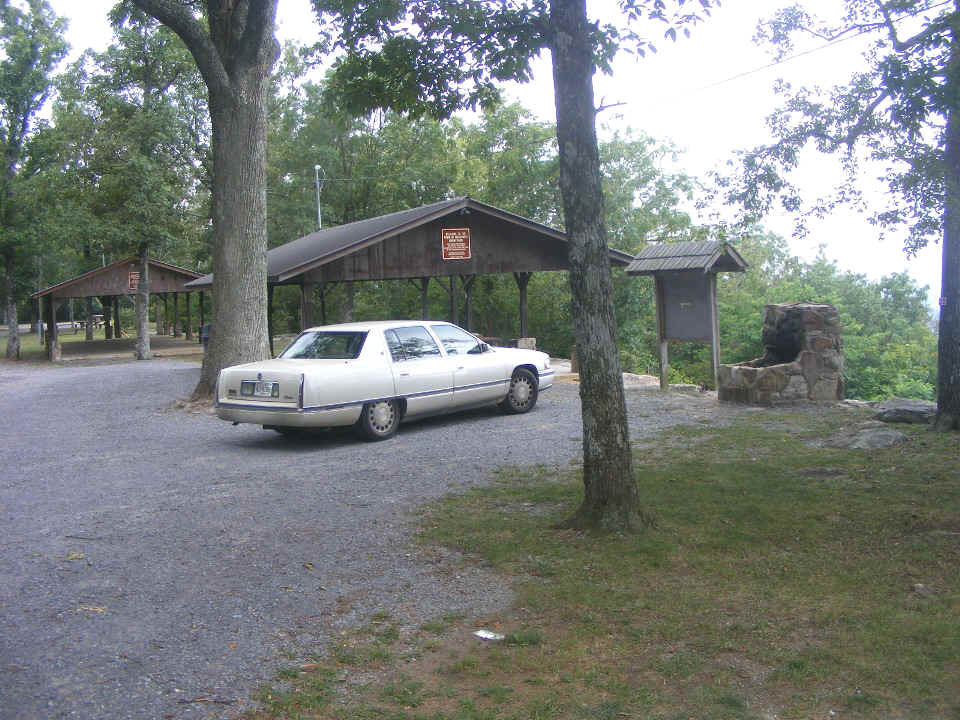 Here is the view looking from one of the sheds toward the west and the valley below near the town of Valley Head, Alabama. 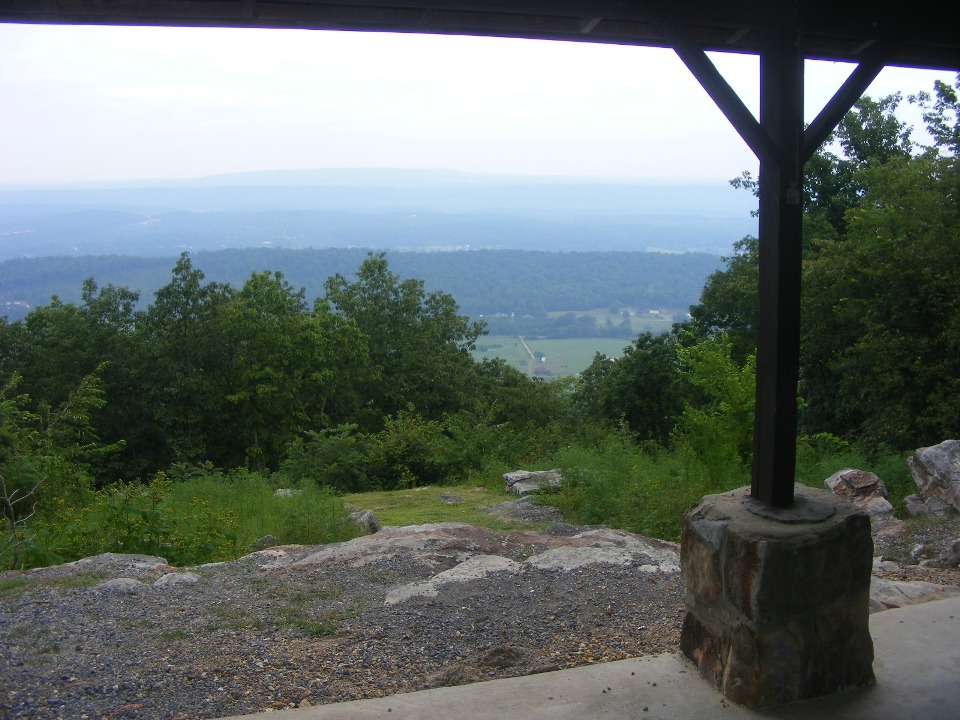 The last photo from Mentone is this classic wooden hotel that dates from around 1900.  The modern era power, telephone, and cable television cables have changed this view from when the hotel was in its hey day.  There is more of this building hiding behind the trees at the left side of this photo.  I will have to make a flight over this area some day soon to put things in better perspective. 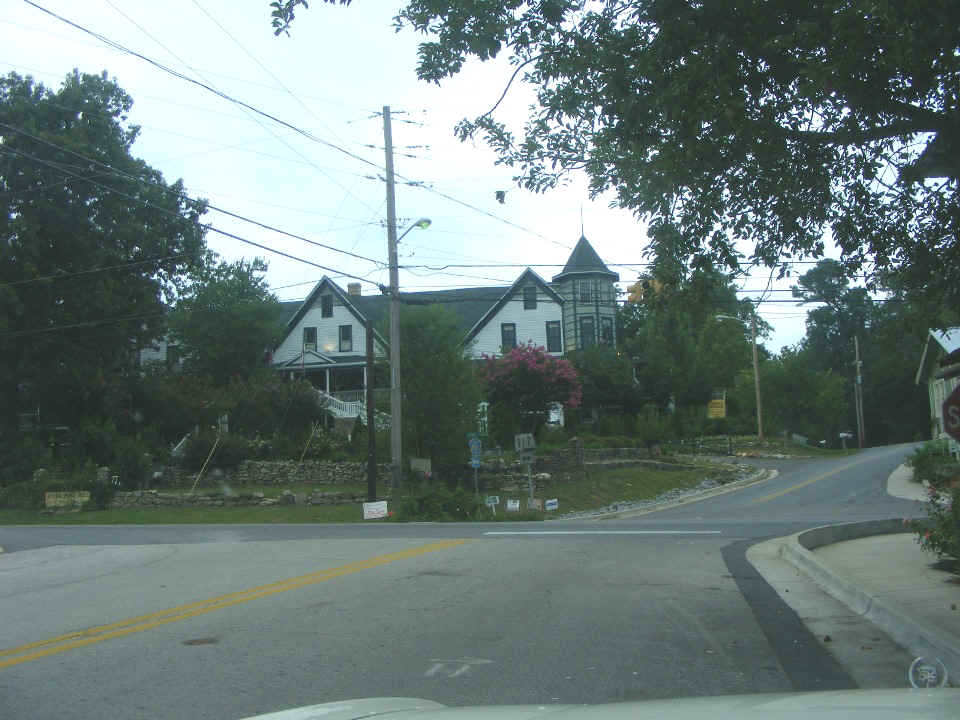