June 10, 2007:  Sunday and the end of the inspection has arrived.  Today, the focus is on the area behind the baggage bulkhead.   The ELT battery voltage on all of the Mallory alkaline cells is still at 1.61 volts DC.  The date code on the batteries is 2011.  I tested the ELT at 12:02 PM in the five-minute window allowed for these tests at the top of the hour.  Just a couple of chirps were all that I needed.  I made the test when the unit was disconnected from the antenna.  Being inside the metal hangar building also helped to shield the signal from the Chattanooga airport located 10 miles north of the hangar.  The LED night lights for the baggage area are easily visible with the aft padded wall fabric removed. 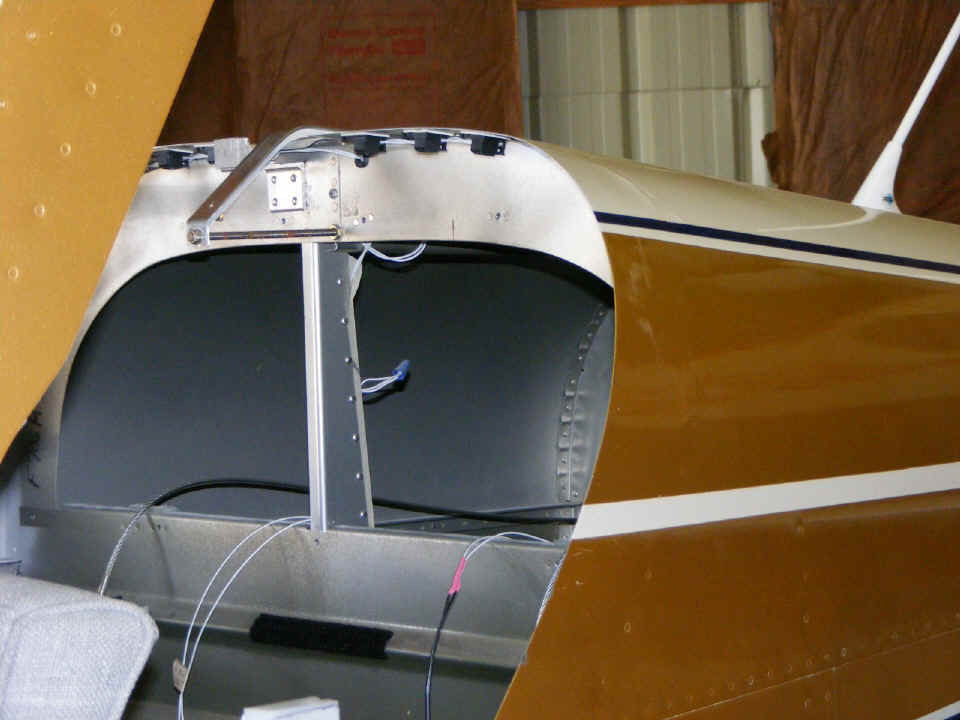 Here is the view in the back of the fuselage from the baggage area.  I had forgotten just how much paint over spray was in this area.  The "shadows" in the paint show just how much the cables move around with flight movements and engine vibration of the fuselage skin.  The white wires closest to the camera lens are speaker wires (nothing vital).  They attach to the speakers on the bulkhead that is removed for this photo and inspection. 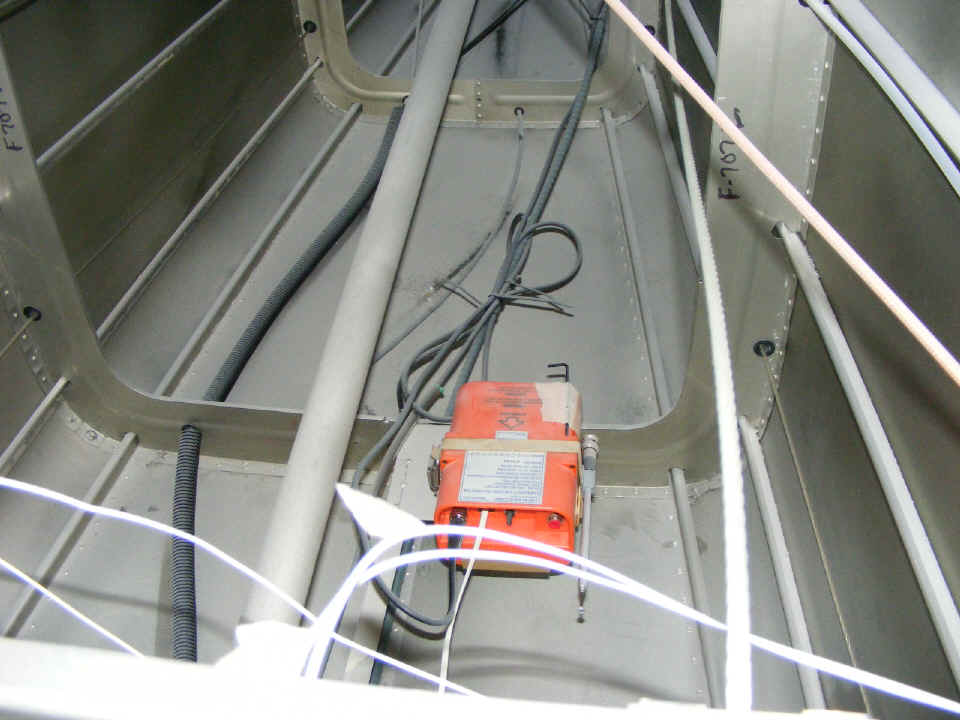 With everything completed on the air frame, it was time to button things up and go for a flight to check out the avionics operations.  The first thing is to check the VOR/ILS/Glide Slope operations of the Garmin AT SL-30 receiver.  I headed for Dalton Airport (KDNN) for that test.  After a touch-and-go there, I thought about heading back to Folks Field, but decided to head up to the student pilot practice area near Cohutta, Georgia to do some stalls and steep turns for my upcoming BFR this month.   I also wanted to check the calibration of the lift reserve indicator probe angle.   It got bumped by a bale of hay when I was pulling the airplane out of the hangar for my second Florida day trip back on May 20th.

Here is the ILS approach from the NDB waypoint that is on the extended runway center line.  The GPS confirmed the location of the NDB.  The SL-30 NAV receiver tracked the localizer until the glide slope came alive during the approach.

This close-up of my GPS ground track shows several steep turns and a turn-around-a-point maneuver.  The stalls don's show up in the ground track since I was able to stay on course at the very slow stall speed of the RV-9A.  The approach to the turns was from the south.  The departure to the northwest is toward the Collegedale Airport for the second touch-and-go of the day before heading back to home base.

At the end of the flight, the airplane log book was updated and my pilot log book also received another 1.0 hours from the Hobb's meter.  The weather was hot today at 92-degrees F (31C).  As a result, it was really bumpy in the climb out of the valley heading for Dalton.  The test area was a bit smoother at my test altitude of 3,500 MSL for the steep turns and stalls.  It was good to get in my air-conditioned car for the ride home from the airport after cleaning the bugs off my airplane.

June 11, 2007:  Wendell is getting his Cessna 182 annual inspection at the Collegedale Airport.  The potential buyer from Alaska is here to witness the engine compression testing.  One cylinder had low compression and is being checked with a bore scope.  The valve and valve guide in that jug needed to be replaced.  Otherwise, the inspection went well. 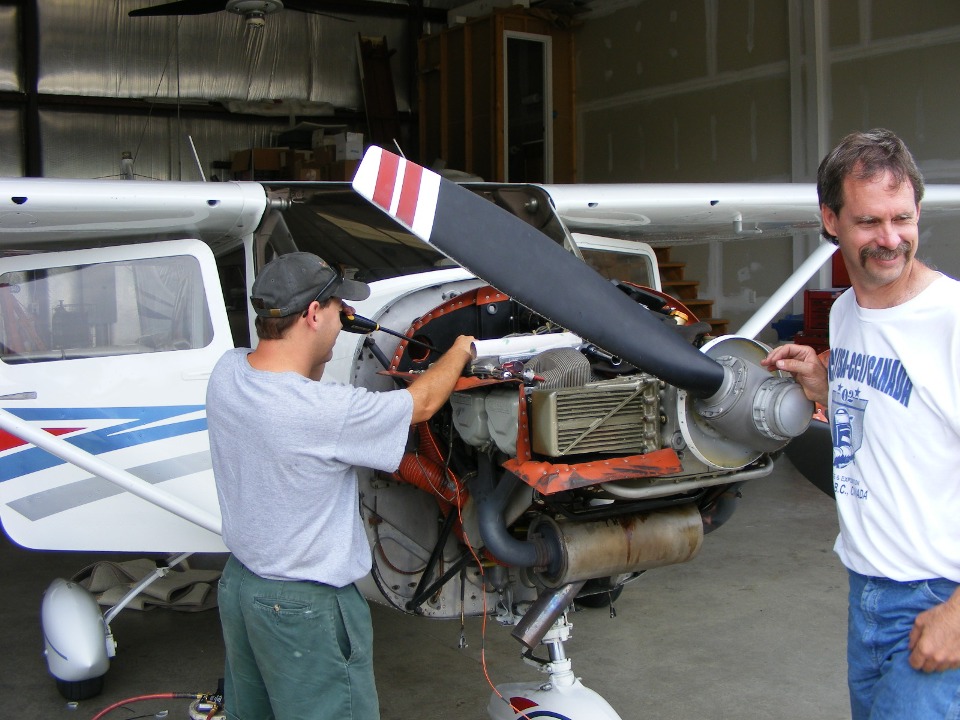 June 14, 2007:  I printed my replacement label for the V-speeds and the switches above my GMA-340 audio panel.  Here it is posted on the panel with new clear adhesive tape.  The Dynon data switch has been in the panel for a few months.  The new label combines the former switch label and the V-speeds chart into one printed format. 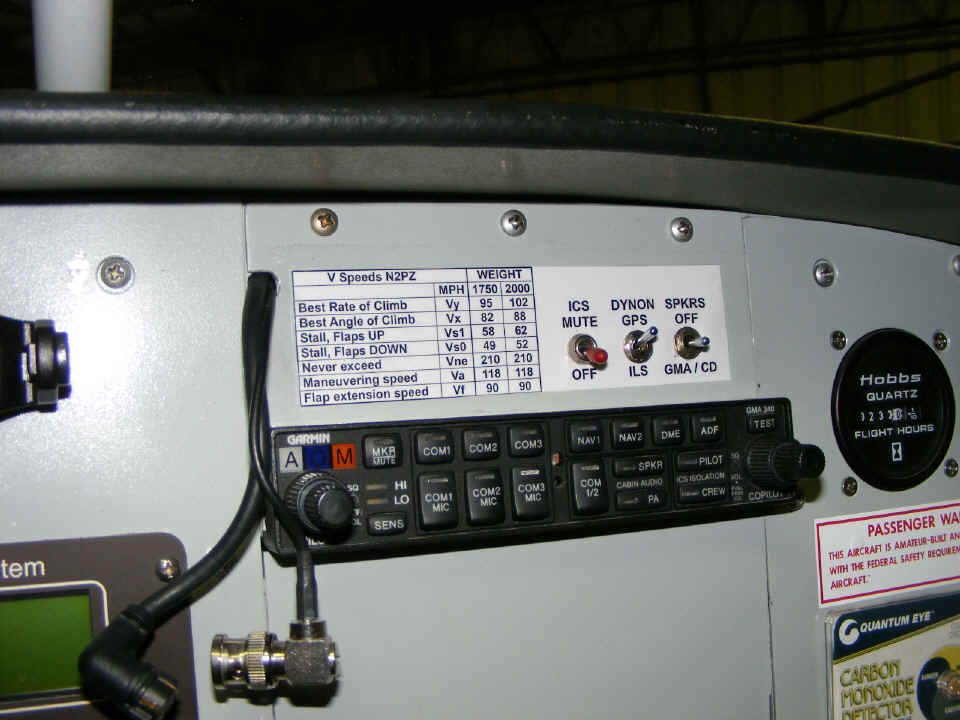 June 16, 2007:  This Saturday was all about flying, one way or another.  The morning started with the EAA Chapter 150 fly-in/drive-in breakfast fund raiser.  It was my turn to work the breakfast as one of the crew.  We had a good turn out of guests.  I scrambled 120 eggs in four batches of 30 each time.  We were only open from 8 AM to 10 AM, but it worked out well.  On the way home from the Collegedale Airport, I stopped to get the oil changed in my car in preparation for my road trip to Florida for the week ahead.

I had a light lunch at home before going over to Wendell's for the afternoon.   I had my biennial flight review today with a local CFI who wanted to learn about Van's RV's.  I did my usual flying techniques enroute to McMinnville, TN to fill the fuel tanks doing the required maneuvers for the BFR.  One of the things that interested the CFI was my Lift Reserve Indicator and how it accurately indicated an approaching stall with flaps up or down.  After doing my high-banked turns left and right, I took the airplane in for a normal RV approach, not the usual VASI "Cessna" approach.  I was repeating the lessons learned two years ago with Mike Seager when I transitioned to RV-*A airplanes.  I let the CFI fly the airplane around the pattern to make the full-stop landing now that he had seen the RV approach.   He nailed it in the cross wind.

Here is a close up of the maneuvers I performed near the Warren County Airport.

After our fuel stop was completed, he got to do the takeoff as we headed down from McMinnville to Manchester, TN.  There was a large music festival there that drew 80,000 fans.  There were sure enough cars parked on the grounds of the site and plenty of people out in front of the active stage when we passed by at 2,000 feet AGL and about 1 mile away from the area.  I took several pictures but did not get a chance to post them before beginning my trip to Florida.  As it turned out, I headed for Florida on Sunday morning and forgot to pack my memory card reader.

When we returned from the flight Saturday afternoon, I worked with Wendell on his RV-8 empennage fairing.  Wendell wanted to add a small amount of fiberglass to the fairing where it goes around the leading edge of the horizontal stabilizer.  The first four layers looked good when I returned on Sunday morning to pick a few tools I wanted to take with me on my Florida trip.

The rest of Father's Day on Sunday was all about a leisurely ride across Georgia before getting back on I-75 and the Florida Turnpike to arrive at my hotel in the Orlando area around 10 PM.  Some of those back roads in Georgia in the early afternoon were where I went with my father in the 1960's as a beginning driver at age 15.   It brought back a lot of fond memories.  Before the day ended, I had a chance to speak to all three of my sons.  The  two older brothers have children and had a good day with them.  My youngest son is 25, single, and was preparing for a road trip with three other employees to St. Petersburg, Florida this week.

I am posting this from my hotel tonight with an internet connection that is less than perfect.  The speed varies with the stability of the wireless connection in the building.