September 18, 2006:  This entry finds me on the road for my day job in the Philadelphia area tonight.  I have an update to create a new page for my section of the web site.  Before I left town this past Saturday morning, I had previously went by the hangar to remove the cowling from my airplane.   This allows Wendell to see how things are done on the items I have reviewed with him before my departure.  You can see the last photos I took of his project on his NEW PAGE 28. 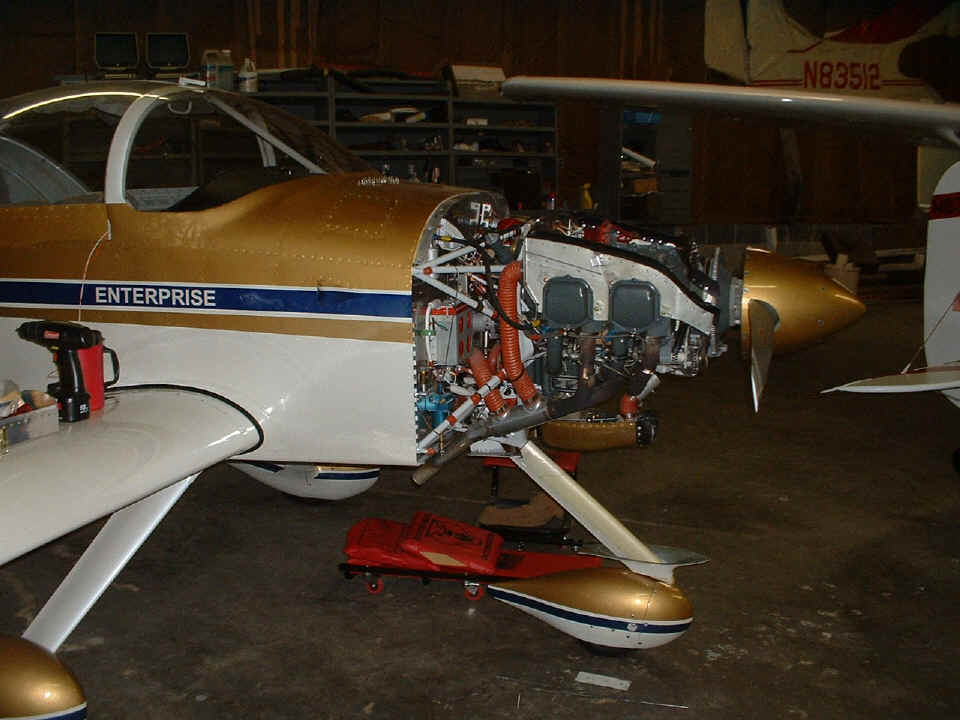 September 24, 2006:  A lazy Sunday at home today after the road trip, etc.  I have a number of photos from my visit with my son and his family near York, PA from last weekend.  You can find those pictures in my family section of the web site.

I made it home around 7:30 PM on Friday evening.  The trip went well with all my scheduled appointments going as planned.  I made a stop in the Philadelphia area where I came across a bit of my past.  This satellite antenna is one of the thousands sold and delivered from 1978 to 1989 while I worked with Microdyne Corporation.   This five-meter fiberglass antenna was made by Antennas for Communications (AFC) of Ocala, Florida.  At one time, AFC was a wholly-owned subsidiary of Microdyne.   This one sits behind the facilities of Toner Cable Equipment Company. 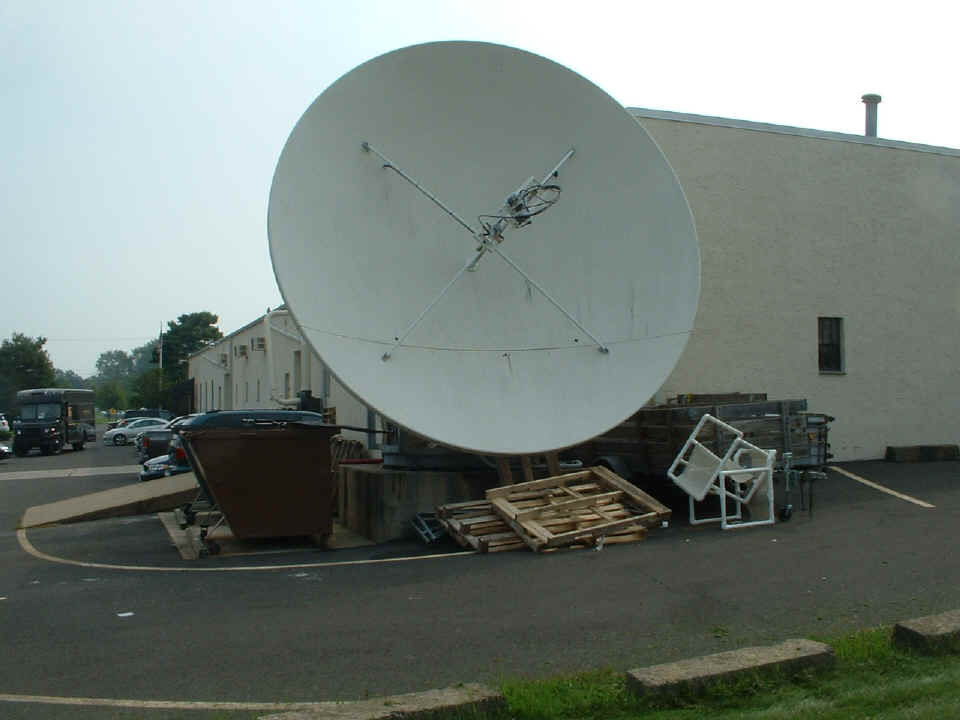 By the type of mount it has, I can tell it was an early unit.  The multiple satellite feed assembly is an after-market model made by a former employee of my field service group.  The original feed was at the focus of the parabolic reflector.   The off-axis feeds can still receive sufficient signal strength to produce usable signals from adjacent satellites in the orbital arc.  This unit is receiving three satellites. 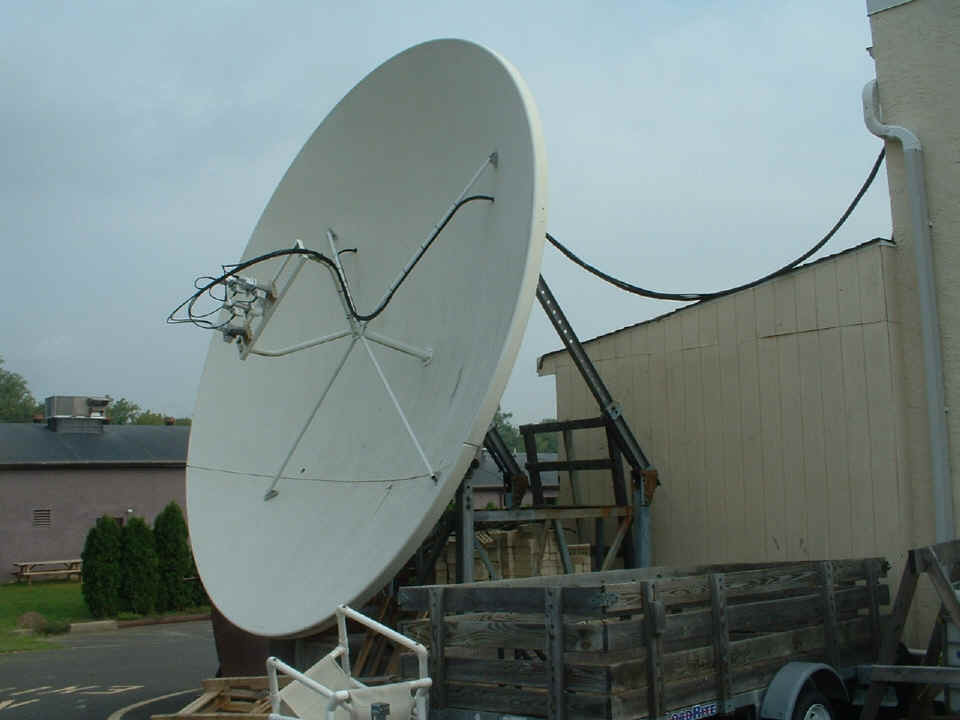 This photo is from the town of Montour Falls, New York when I went through there on Wednesday afternoon.  I stopped to make several phone calls on my cell phone.  From this photo, it is obvious why the town has that name.  You can see just ONE tree up on the hill side that is showing some fall color.  It appears my trip in this area is a bit too early for the best fall colors. 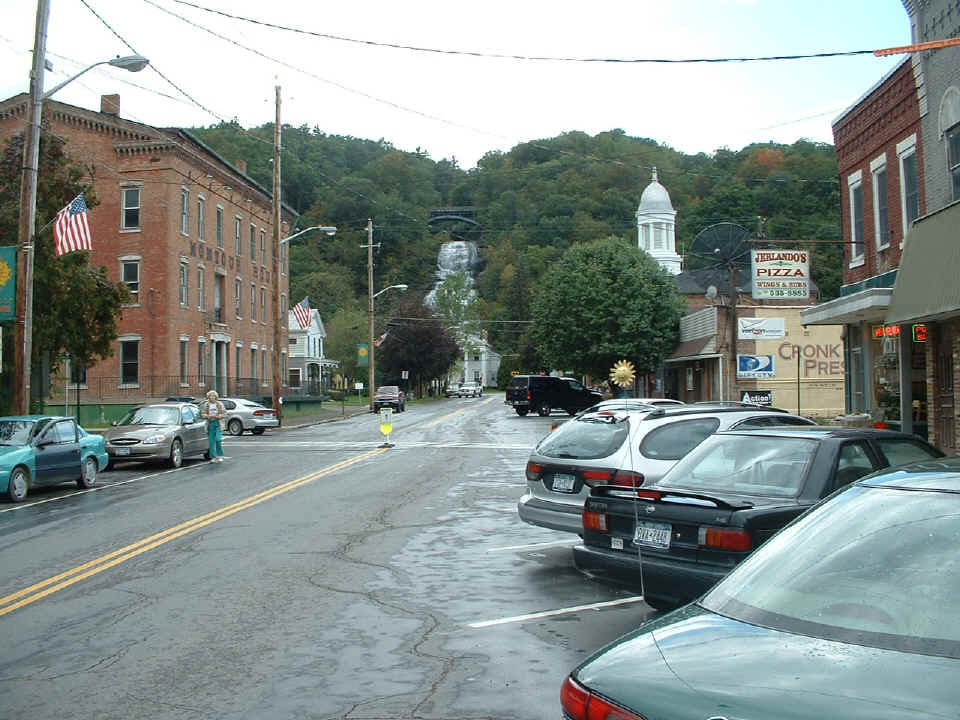 The travels for Wednesday got started late in the morning.  I needed to remain at the hotel to handle phone calls and email before hitting the road from Owego, NY to Buffalo, NY.  My original plan for the day was to go to the Toronto area.  I stopped twice enroute to handle a number of customer phone calls and to work on my computer in the car while on the phone.  I did manage a short stop at Penn Yan Aero Service to see the facility that assembled and tested my ECI O-320 engine for my airplane.   Derrick Slack gave me the tour of the facility and let me see the difference in a cylinder with my Cermanil coating and a plain steel cylinder showing rust.  The Cermanil will not rust due to the high content of nickel in the inner surface of the cylinder walls.  I made it into Buffalo and got a hotel room near the airport just before sundown.

Thursday morning began early with a border crossing at the Peace Bridge at Buffalo/Port Erie.  I reached my appointment in the Toronto area by 8:15 AM.  My meeting was completed by 11:45 AM and I was back on the road across southern Ontario heading for my next meeting just north of the Detroit suburbs.  My day ended with a hotel room on the south side of Toledo, Ohio.  That left me with a nine-hour day trip home to the Chattanooga area on Friday.  I had several phone calls enroute, including one that required me to stop off Interstate 75 to use my computer again.

September 27, 2006: The trip home last Friday was completed around 7:30 PM.  It was good to settle into my favorite chair and watch some TV instead of the road ahead.  The open house at the Collegedale Airport will be Sunday, October 1st.  The EAA Chapter 150 will have our usual booth to sell burgers, hot dogs, etc.  It looks as if the weather should be fine for Sunday.  I will fly my airplane over there and shoot some video of the approach, etc.  As usual, I spent a part of this evening with Wendell checking his work on the RV-8 project.

October 1, 2006: The weather for the Collegedale Airport open house event was mixed.  There was rain overnight on Saturday night that contributed to hazy VFR conditions early in the morning.  As a result, I did not get any video of the flight into Collegedale.  With the heating of the atmosphere at mid-morning, a short period of overcast sky occurred until after lunch.   After lunch, the overcast started breaking up.  I had one Young Eagle flight today and here is the lucky young man posing for his class picture.  His legs may not have reached the rudder pedals, but he had the right touch on the joy stick to make smooth turns and climbs.  At 5,500 and 6,500 MSL, he had a chance to experience headwinds and tailwinds as I explained the difference between true airspeed and GPS ground speed.   He was really excited after his flight.  His older sister got her Young Eagle flight at AirVenture 2006.  As a side note, it was during this flight that my total pilot flight time passed 400 hours.  The "Enterprise" passed 208 Hobbs hours in that flight as well. 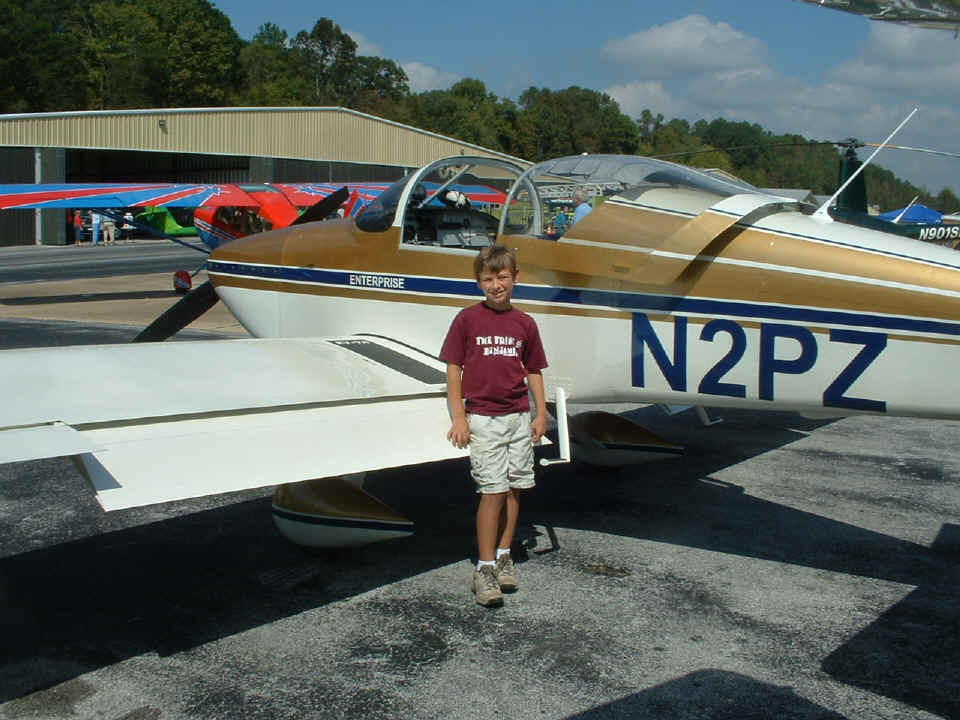 Two Swifts and an SNJ were the fly-by aircraft to attract attention to the small town airport near Collegedale.  I had my RV-9A parked next to a local air charter service company's two airplanes.  The local flight school was giving rides in two of their Cessna 172's.  The local radio-controlled model airplane club was also giving demonstrations during brief airport closures. 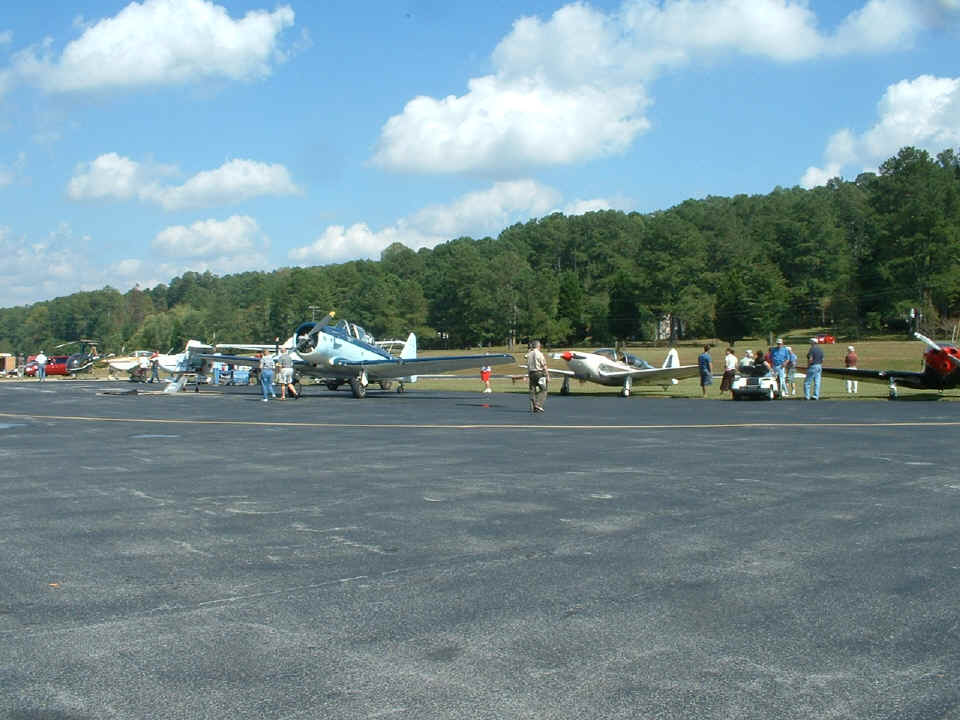 At the end of the day, it was time to top off my fuel tanks before heading home.  The clear sky and long shadows tell the tale of the flight home to Folks Field.  The flight path is to the southwest flying almost directly into the sun at this time of year.  I keep my hat brim pulled low and stay out of the Chattanooga Class C air space to insure a safe ride for the 12-minute flight.  I monitored Chattanooga approach and heard the controller advise traffic at 3,000 MSL of my position and direction as he passed well over my 1,900 MSL flight path.  The glare of the sun prevented me from seeing the other airplane above me, but he saw me approaching my home field.  I was no factor on his approach to Chattanooga. 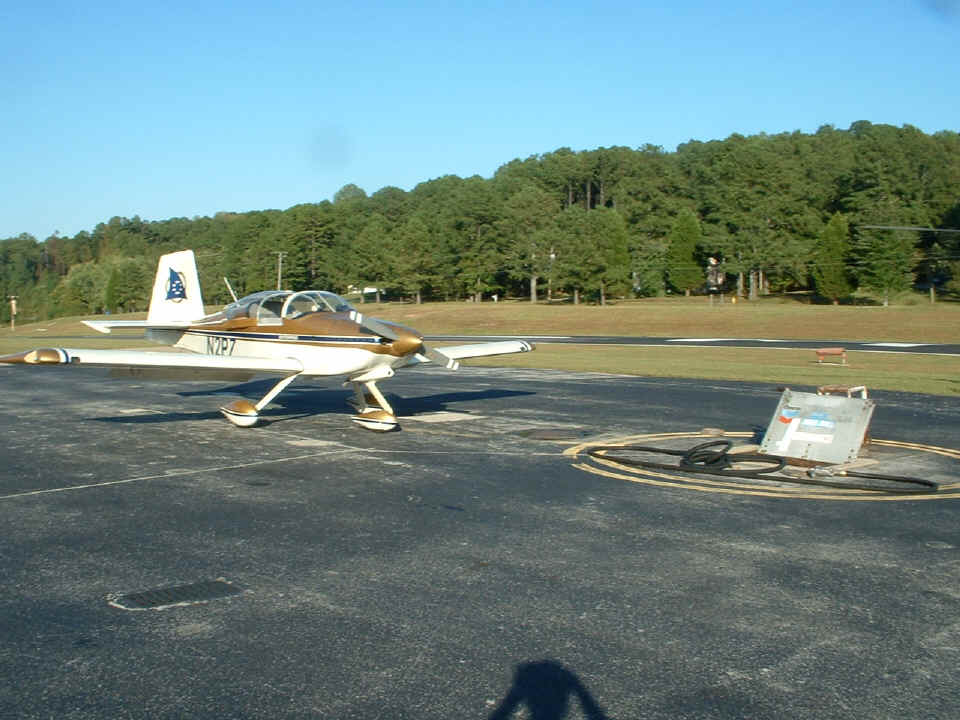 Here is the flight path for the day from Folks Field to Collegedale, and the path of the Young Eagle flight.  Before each flight, I use the sectional chart to indicate where we will be flying.  I usually fly by the Chattanooga "Choo Choo" VOR (GQO) to let the Young Eagle see the results of passing near the the facility.  The OBS indicator and digital readout show the indicated changes of the VOR radial as we fly past the transmitter location.

The local controllers in the Chattanooga Class C radar facility know Wendell quite well.  Some of them will acknowledge his airport on the radio as "Chickamauga International Airport."