July 31, 2006:  Here are MORE "video snapshots" from the video tape recordings I made during the trip to AirVenture 2006 at Oshkosh.  There are things here that I did not have time to capture using the digital still camera.  The resolution is low at 640 x 480 pixels.  All photos on this page were taken on Wednesday, July 26, 2006.

We got our group of four RV's off quickly and started to form up before we cleared the Oshkosh Class D airspace.  I could hear the outer marker beacon as we flew past the west side of the Fond du Lac airport about 14 miles south of Oshkosh.   The low cloud cover was now beginning to open up nicely the farther south we flew, but we all knew that a big SIGMET and a wall of storms were down near Chicago and westward across Illinois toward Saint Louis. 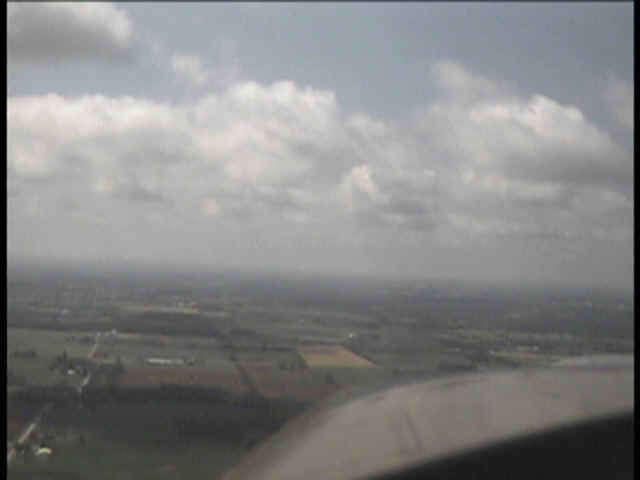 A few miles further south and open sky begins to lure us upward over a scattered cloud layer. 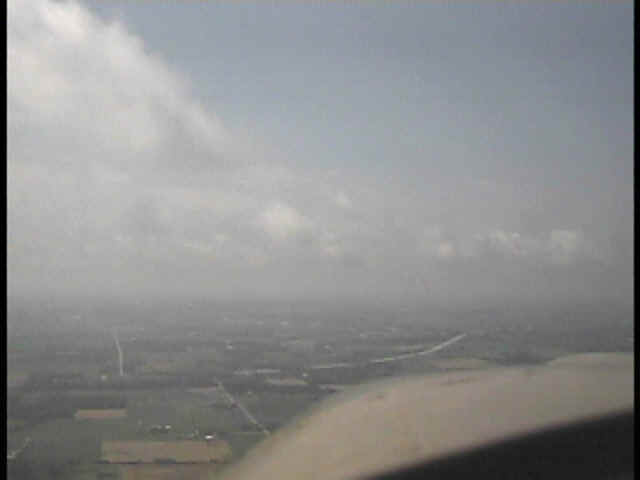 From our new vantage point on top of the scattered cloud layer, the far-off wall of clouds with the winds and storms below, tells us that we will be flying westward before turning on course for home later. 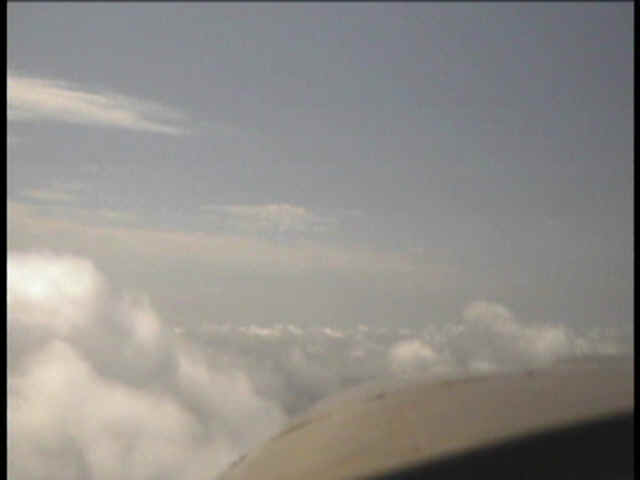 This view looking southeast gives more detail about the storms near Chicago as we fly parallel to the storm front. 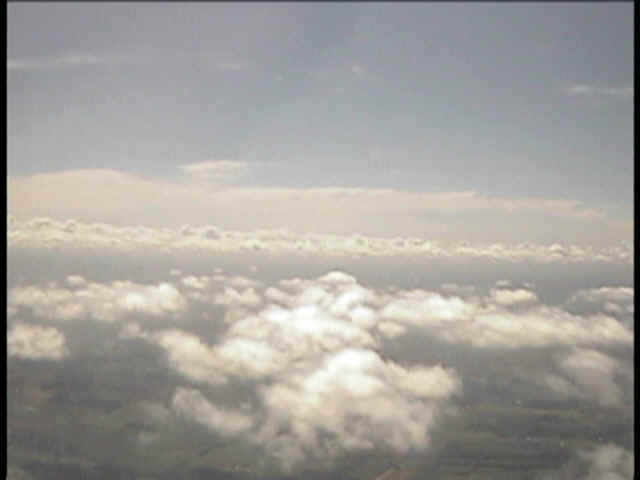 We passed the Madison, Wisconsin class C airspace and turned on course to the southwest and what would be a fuel stop near Brookfield, Missouri at the North Central Missouri Regional Airport (MIKE-OSCAR-EIGHT). 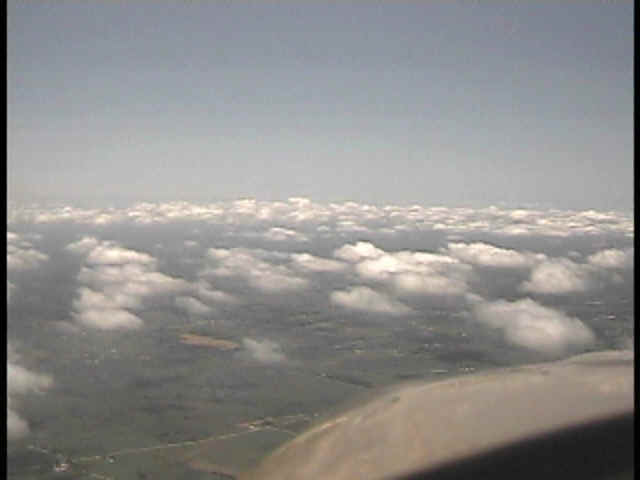 Jake was flying his RV-8 off my LEFT wing and I invited him to come a bit closer for a better photo on video and my digital snapshot camera, which you may have seen on a previous page. 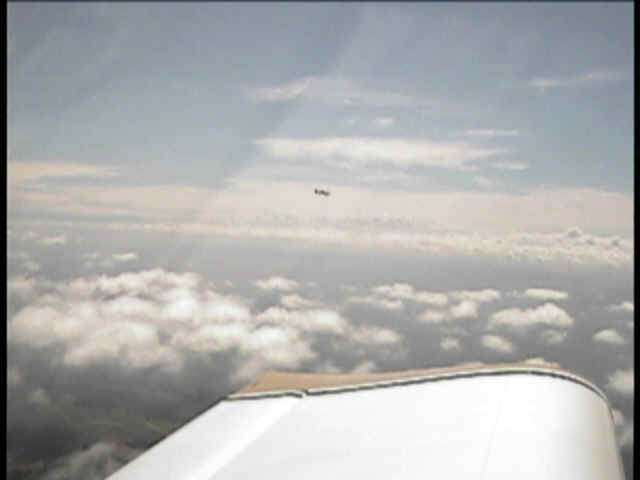 The video camera frame rate was just about making his three-blade prop stand still when viewed in normal playback mode. 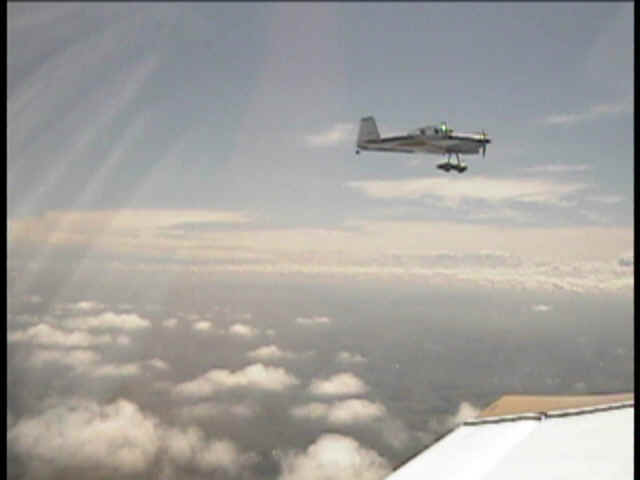 This was as close he got, but that was OK since we are not a formation flying bunch of guys.  The video camera had this ONE frame that caught the flash of his wing tip strobe light as he started to roll away from my position. 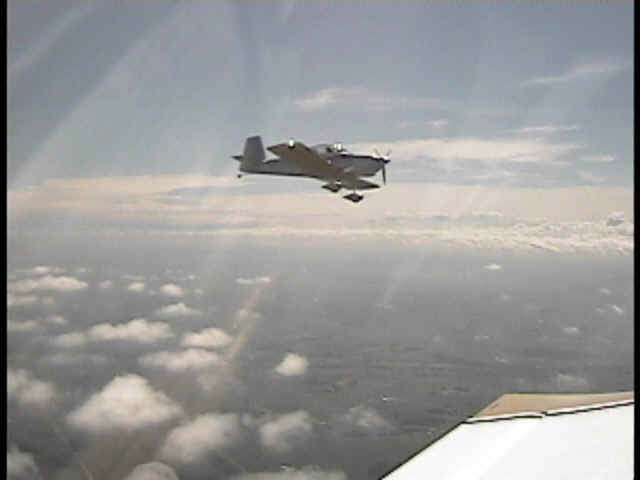 Banking a little more to the left, Jake starts pulling away a bit faster heading back to his normal position. 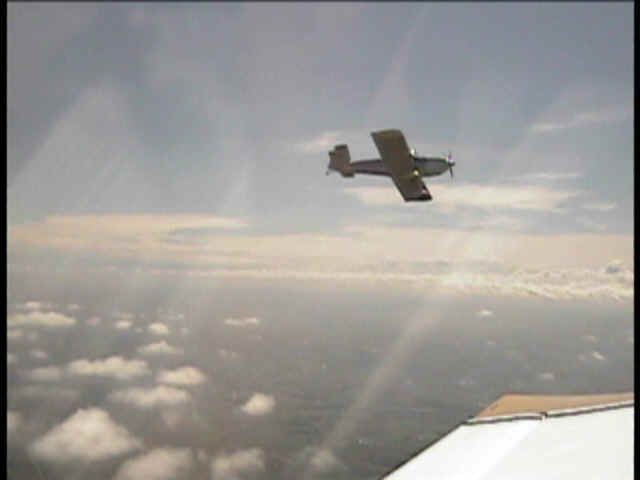 After the fuel stop, everyone flew at their own pace now that the weather was all East of our route.  Here is the Missouri River passing below as seen through the haze on the west side of Saint Louis. 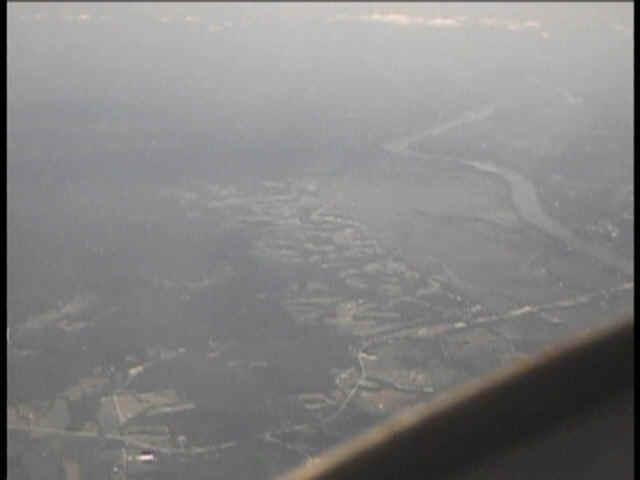 Here is the GPS ground track from my Garmin GPS 296 showing a total mileage of just under 1,639 miles.  The weather for our return flight required us to fly out west of Saint Louis to avoid a massive SIGMET and the storms that went with it.  Most of the GPS route planning on the way home was done in the cockpit with the DIRECT TO button.  We were on a "look and go" VFR flight plan.  By the time the weather cleared up, it was better to go into Brookfield, Missouri for the low-priced AVGAS than to try to get by Saint Louis on the EAST SIDE of town.