July 30, 2006:  Here are MORE "video snapshots" from the video tape recordings I made during the trip to AirVenture 2006 at Oshkosh.  There are things here that I did not have time to capture using the digital still camera.  The resolution is low at 640 x 480 pixels.  All photos on this page were taken on Sunday, July 23rd.

We were watching the parking row numbers count down as we followed the escort vehicle along the taxiway.  He finally turned down row 311 heading south toward the showers.  Take a look at that low dark spot to the right side of the photo.  It is in row 310 and indicates other issues with this part of the camping area. 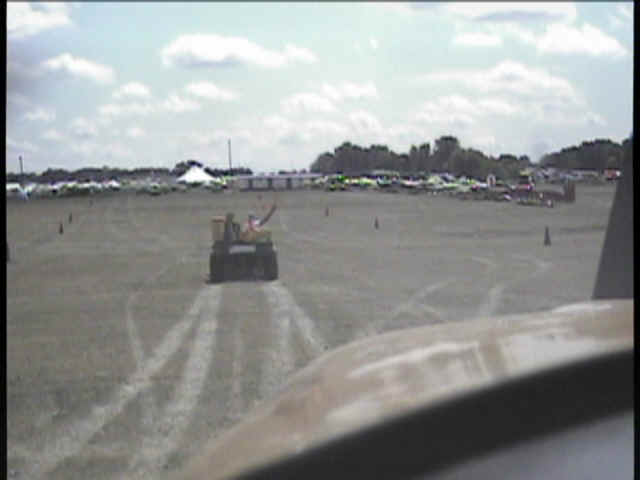 Watch what happens next as we near the low spot I mentioned in the photo above.   I am using full-up elevator as I taxi at low speed across the grass here.   That is what I was taught to do by Mike Seager during my transition training.   It minimizes the chances of damage to the nose gear leg. 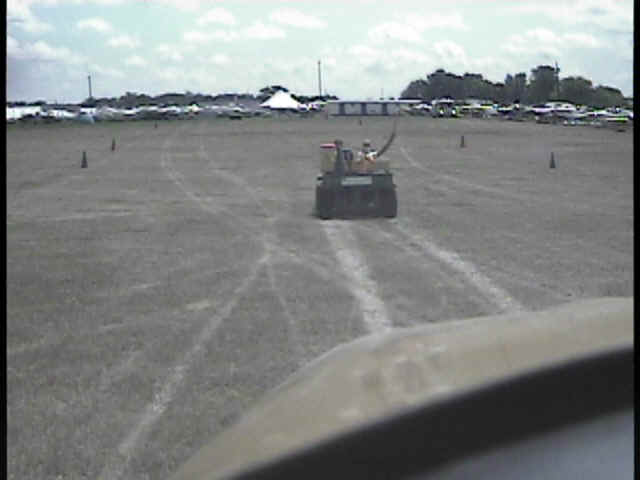 When I hit the low spot in the field, the bump gave the nose wheel a recoil and the nose of the airplane started up since I was holding full up elevator and had plenty of weight in the baggage area behind my seats. 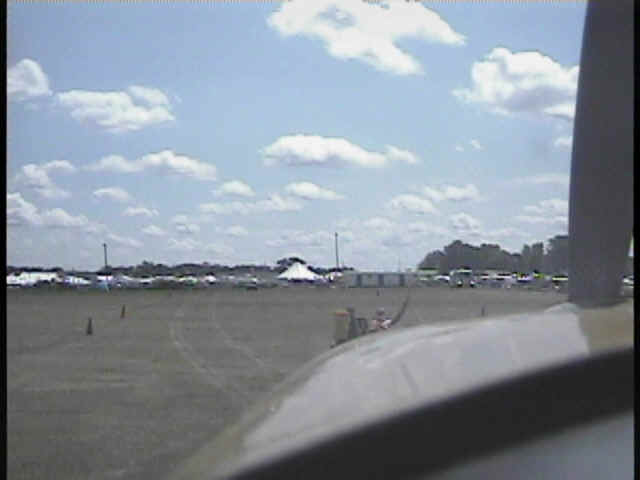 At this point in the rise of the nose, I started pushing the stick forward a bit to lower the nose back down to the ground.  The tie-down eye bolt in the tail did not touch the ground, but it had to be close! 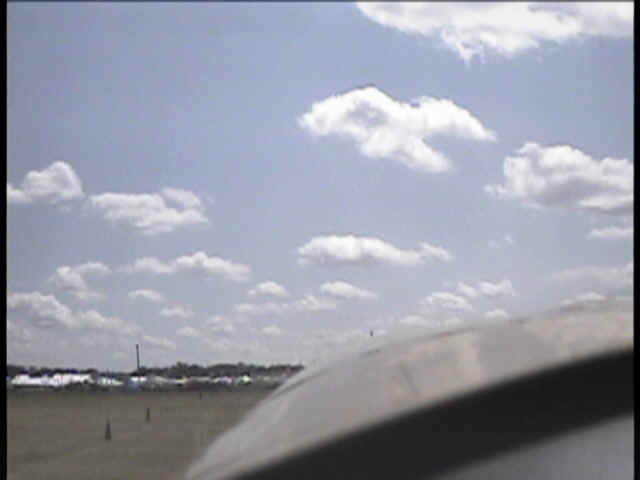 Finally, everything is normal again.  These three video snapshots were taken from about two seconds of video elapsed time. 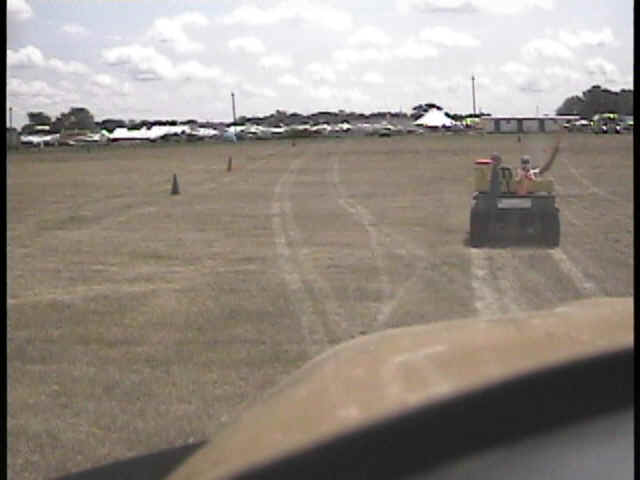 As we approach the shower house, the escort vehicle turns from row 311 to row 310 now that we have passed the lowest part of the field on row 310 where the bump got my nose wheel off the ground back there.  The two-tone blue RV-6A near the right side of the photo is built and flown by Bob Butler from Decatur, Alabama.  He is a member of TVRVBG. 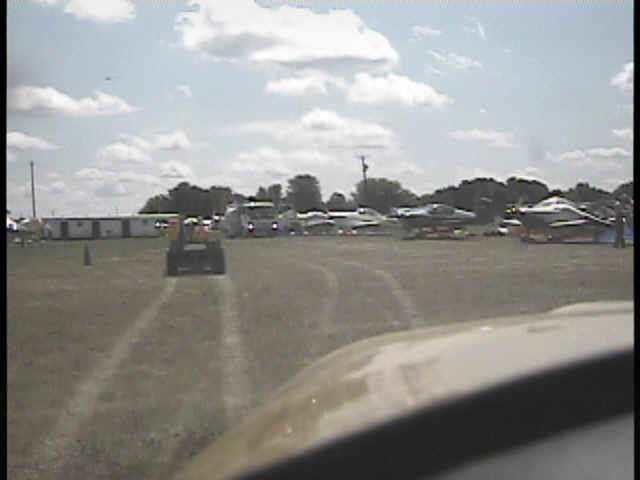 We finally reach the fifth space from the south end of row 310.  One of the guys from the escort vehicle is just out of frame to the left of this RV-8A which will be our neighbor to the south for the next few days. 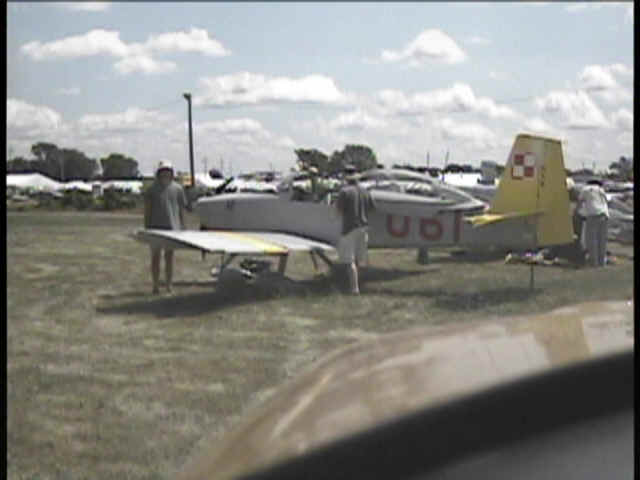 Finally, wheels stop, engine off, and time to unload the tie-downs and camping gear.  It is 3:00 PM Eastern Time on Sunday afternoon.  It has been just over six hours since we took off from Folks Field near Chickamauga, Georgia.  About one hour of that time was spent on the ground getting fuel and lunch at Putnam County Airport near Greencastle, Indiana. 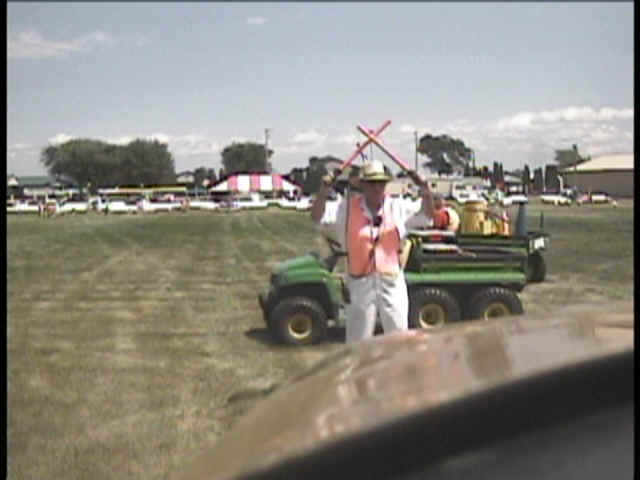 That's all for tonight.  I still have more video frames to post next time to complete my Oshkosh 2006 trip report.