October 14, 2005:  And here is Anthony Gap directly ahead and the Rio Grande River beyond the gap.  (The river is not visible in the photo, but it is there since it carved the valley ahead.) 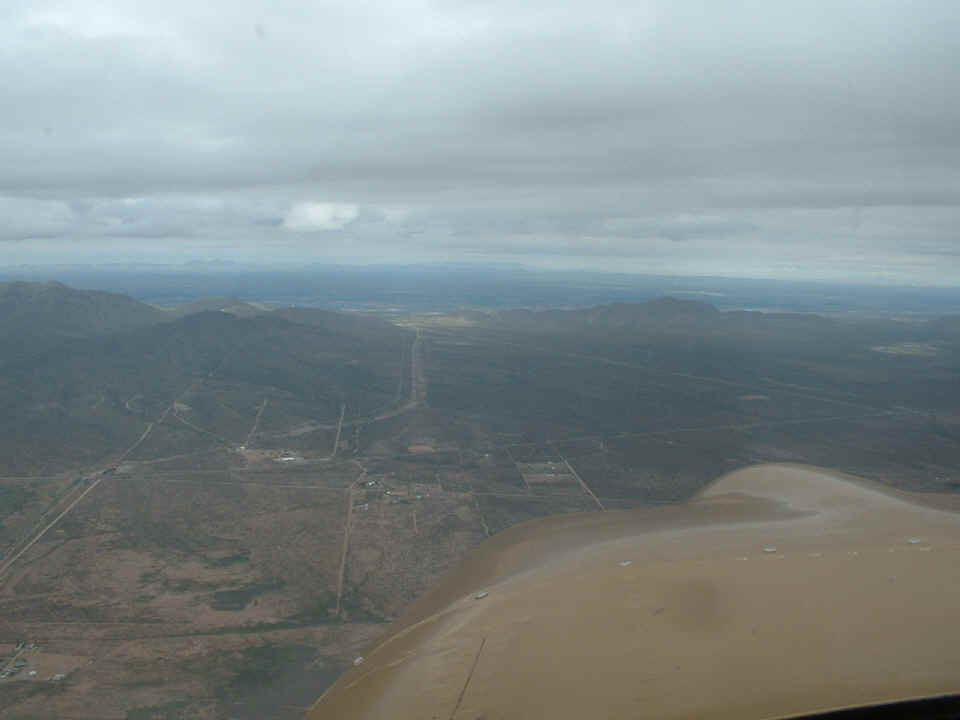 When I took this photo of the Dona Ana Airport, I was wearing my polarized sun glasses and did not see the reflection of the extra penlight batteries up on the dash panel inside the windshield.  The sunglasses remove the reflected glare.  Since the digital camera does not have provisions for a polarizing filter, you can get these reflections from the plexiglass windshield and canopy.  That long white space out there in the Rio Grande Valley is the airport, our destination. 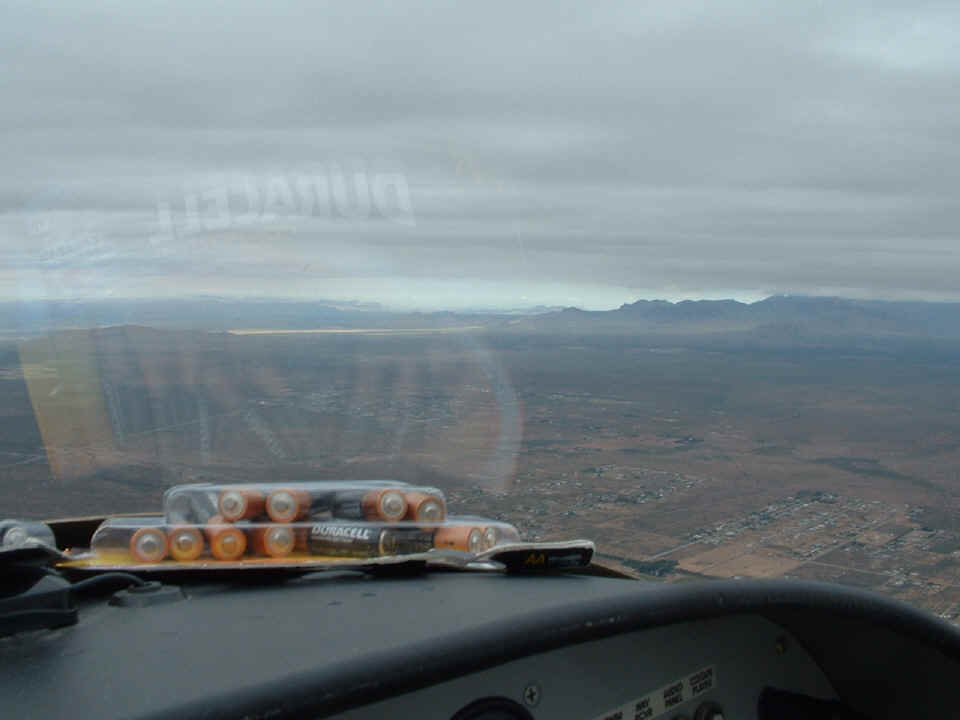 UPDATED November 15, 2005:   I was browsing Doug Reeves' Van's Air Force web site this morning and found this picture taken during my arrival at LOE5 back on October 14th.  This photo was taken by Michael White as I was pulling onto the ramp to the tie-down area.  The Franklin Mountains are in the background and give you an idea of the overcast conditions that greeted us when we flew past the Guadalupe Mountains all the way to our destination here at the Dona Ana County Airport near Santa Teresa, New Mexico. 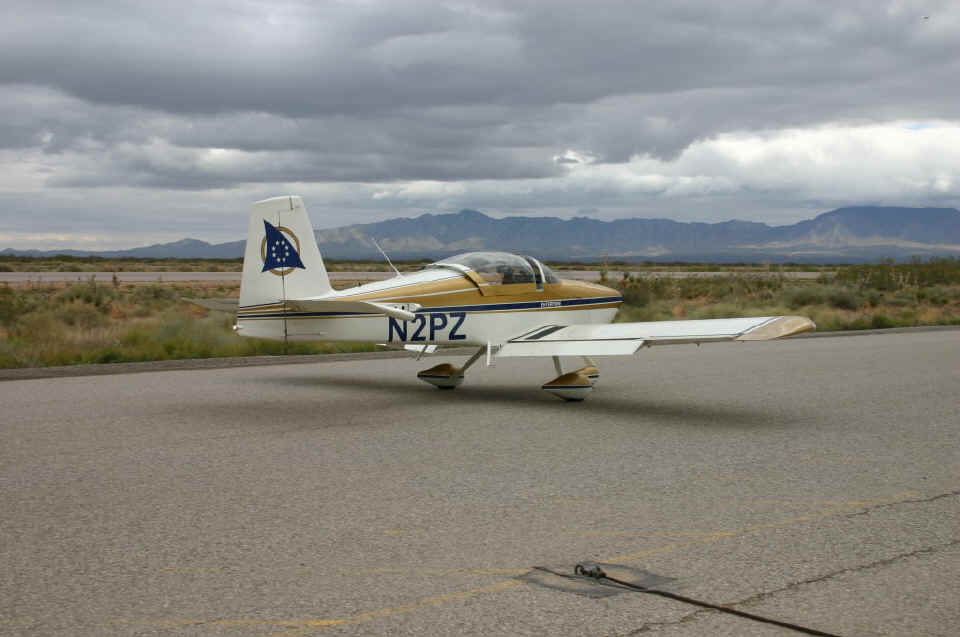 The wind was starting to pick up from the south right after we landed and pulled up on the ramp in front of the War Eagles Air Museum.  This is the site of the RV fly-in and the Saturday night banquet.  After I got the airplane tied down and unloaded, I put my bags into the rental car then returned to the flight line to clean the bugs off the windshield and the rest of the airplane.  That took over an hour since I would occasionally have a pilot or builder stop by to look at the airplane and ask questions about it. 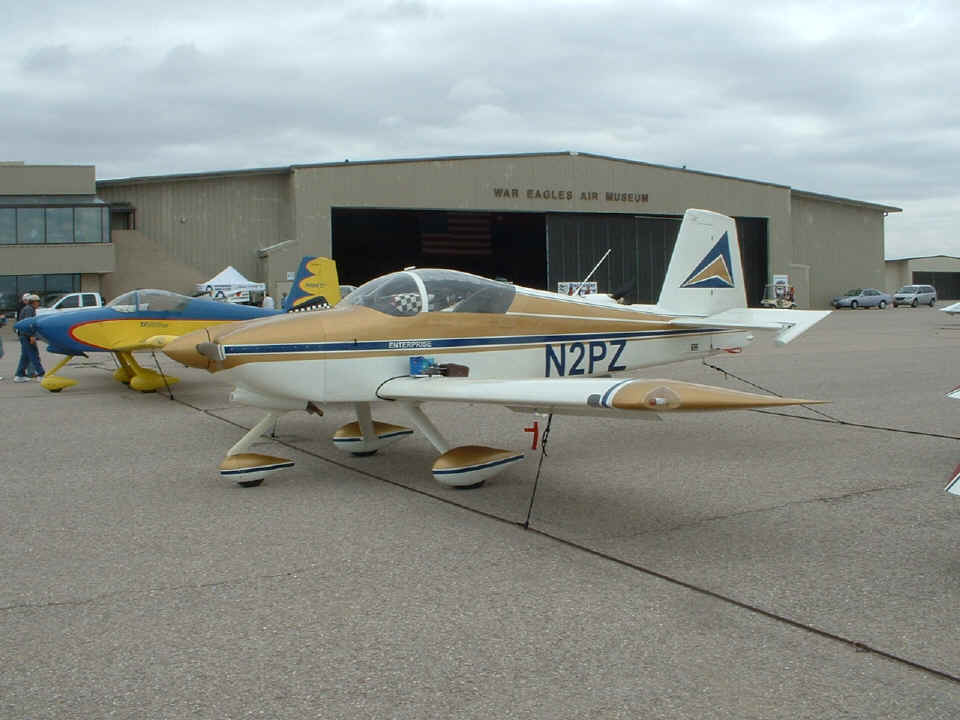 All the airplanes that flew in for this meet are Van's Aircraft models.   The black and white airplane belongs to Doug Reeves.  I made a short flight to his airport north of Fort Worth this morning before sunrise to join up with him and some of his other friends for the ride out here today. 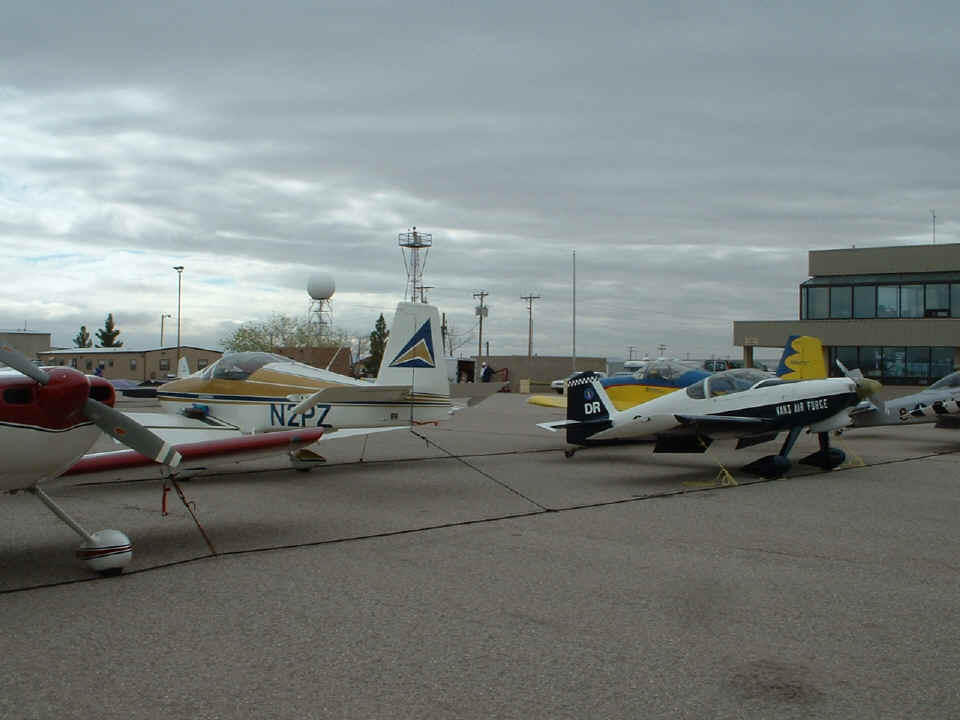 Doug's airplane is an RV-6.  He recently put a new 180 HP engine and a constant-speed propeller on it.  That is why his fiberglass spinner is new and un-painted to fit this new prop.  He has been so busy with preparations for this fly-in that he has not had the time to paint it or the carburetor air intake scoop on the bottom of the cowl. 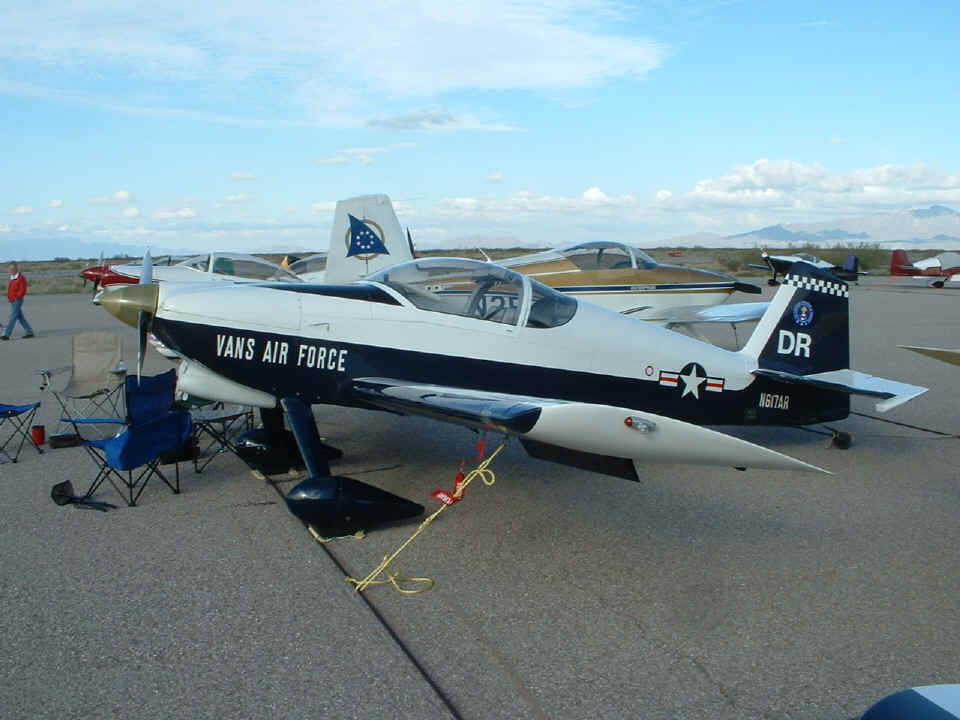 I wanted to take this closeup shot of his tail insignia to show the text:   "The UNITED STATES of TEXAS".  The western slopes of the Franklin Mountains are clearly visible in the background of this photo. 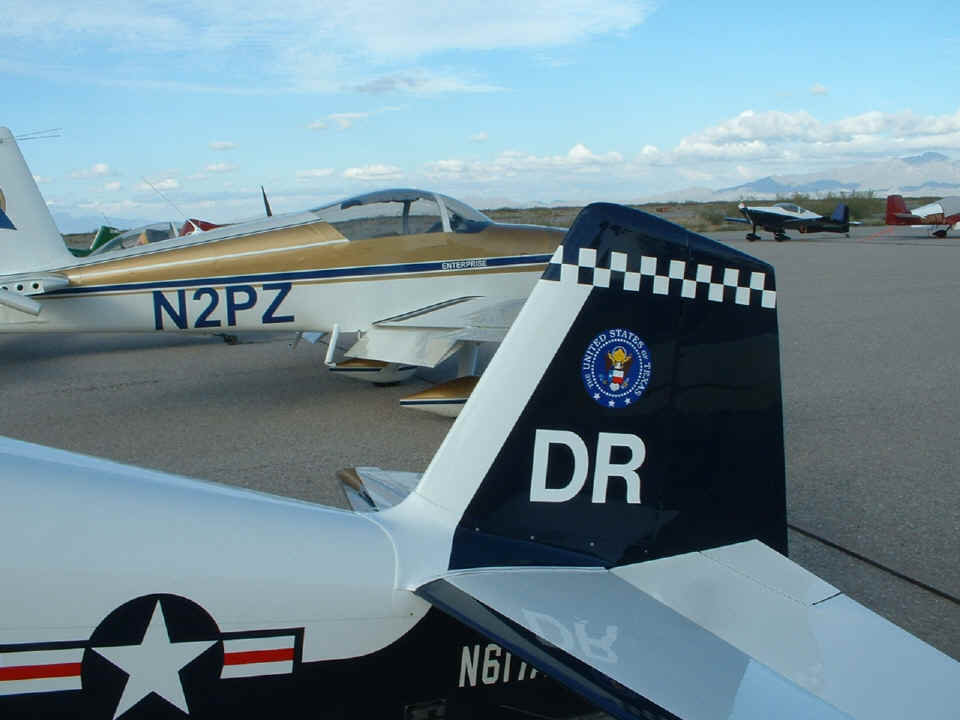 The RV-8 parked on the other side of my airplane sported this "HOT STUFF" tail art. 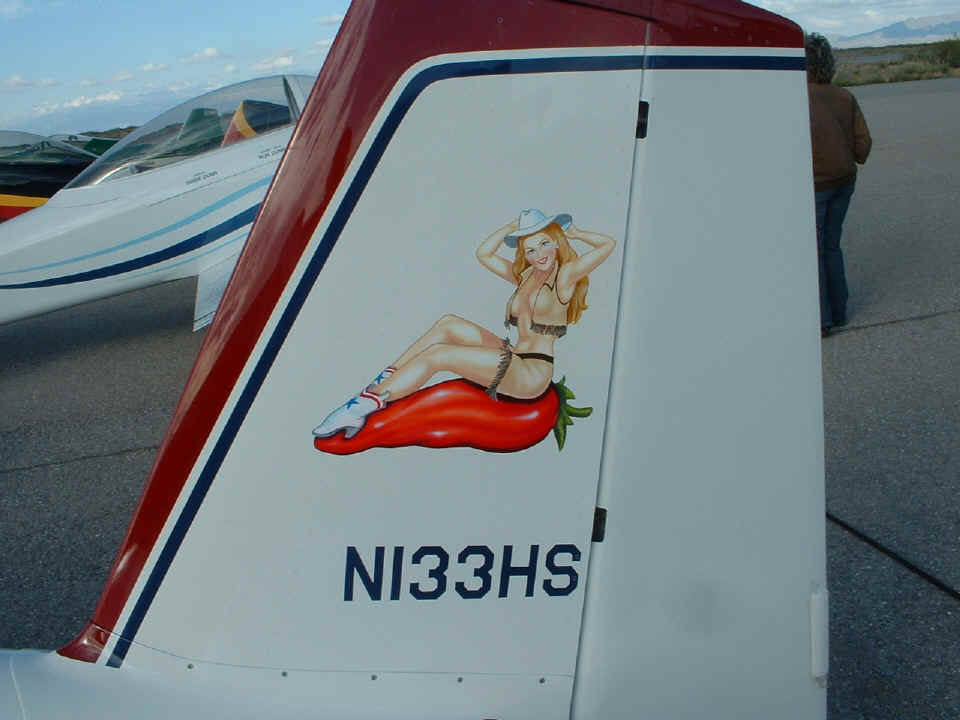 Barb Grover helped her husband build this RV and was the inspiration for the name of the airplane and the tail art. 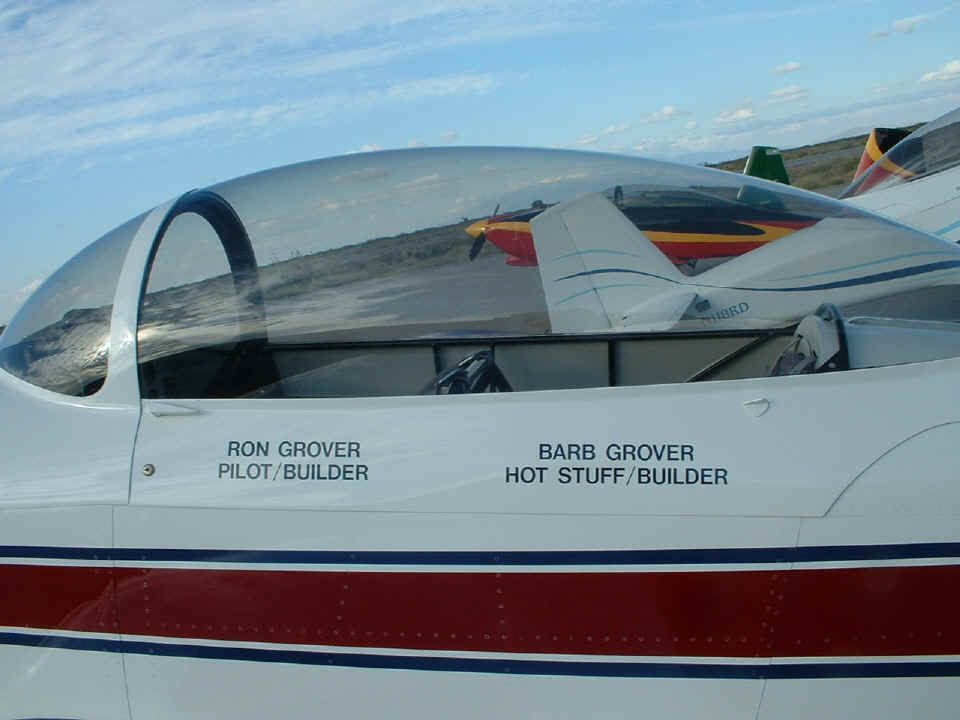 Here is a view showing most of the airplane and the paint scheme.  You get a better view of the Franklin Mountains in this photo as the weather cleared up after lunch time. 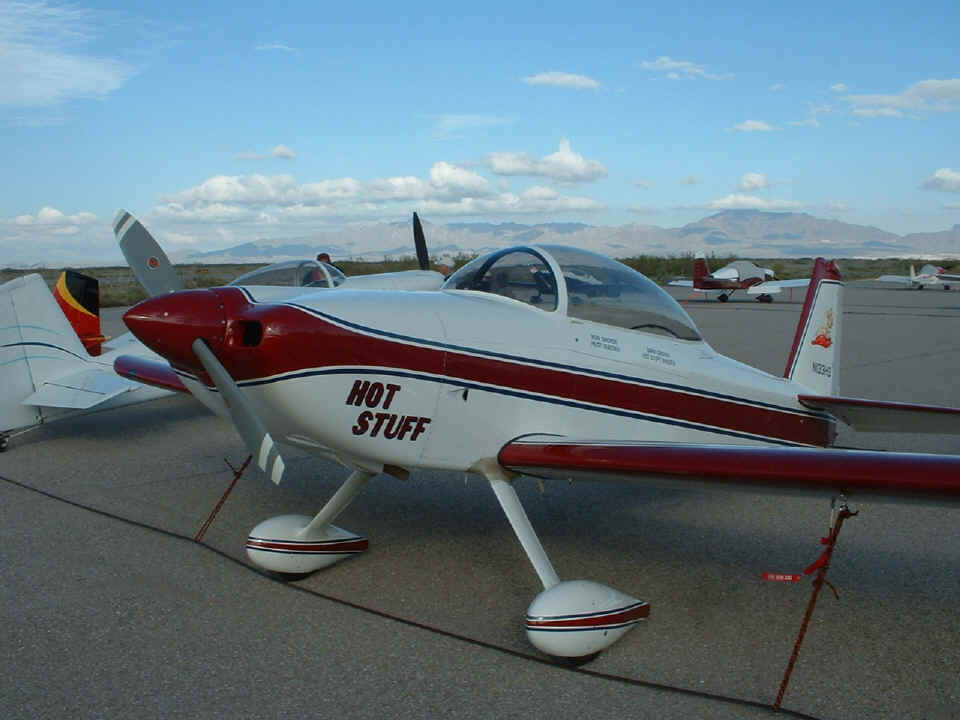