August 3, 2005:  I spent the past two days doing "normal" things like laundry, catching up on my bills, etc.  Today was back to finishing the airplane work needed before I could go to Collegedale to perform a weight and balance measurment.  Here is how the right side of the airplane looked when I called it a day.  The temps were well into the 90's and I drank a lot of water and stayed in the breeze from the fan while doing this work.  I still have to connect that black ground wire from the eyeball light to a suitable ground behind the panel, but that comes later.  I took the free end of it and put it out the side of the canopy to keep it out of the way of the fabric sections I was attaching to the side wall.  The Starship panel, armrest, and the lower large pocket panel are all padded to improve the insulation and sound dampening qualities adjacent to the passenger seat.  The other fabric panels going forward or aft of these are just plain fabric without any padding.   The steel rudder cable is visible just above the seat alongside the pocket. 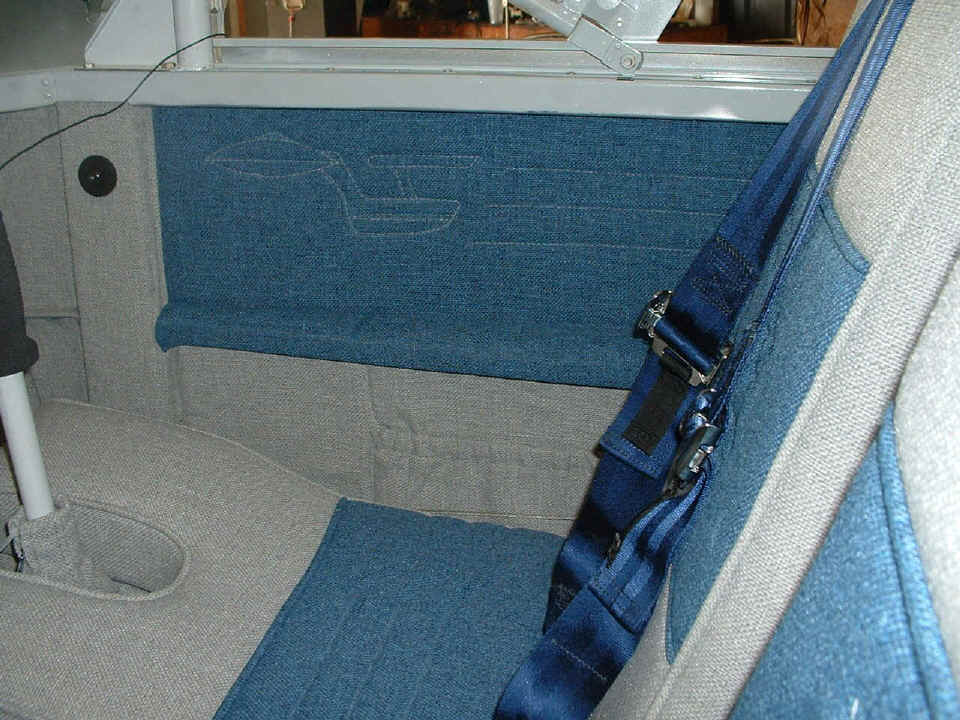 The fabric on the lower half of the baggage area is glued to the aft half of its side panel.  The front half is attached using velcro strips since that panel is removable for access to the flap actuator arm behind the panel.  This was the first time I have rolled up the cover over the baggage area and attached it to the rear wall with the velcro-equipped "fabric straps" that Abby designed.  I had a chance to meet Abby Erdmann when she stopped by to see my airplane at Oshkosh last week.  She owns and operates Flightline Interiors in the Milwaukee, Wisconsin area. 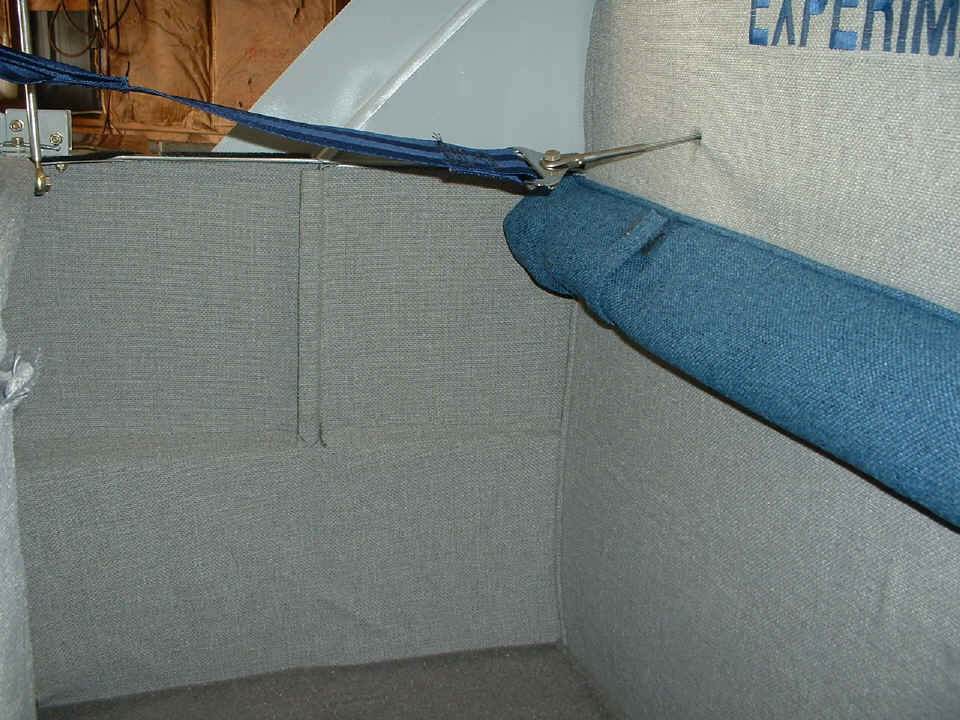 The new aircraft construction work today totalled 7.0 hours including disassembling the fuel caps to put fuel lube on the "O-rings" and the moving parts of the caps.

August 4, 2005:  Today is my youngest son's 24th birthday.  I called Marshall to learn that he is working again and has plans for the day with some of his friends near Atlanta.  We talked about getting together this weekend as our schedules will permit.

I flew the airplane over to Collegedale to work with Rich Nadig in his hangar doing my second engine oil change and a new weight and balance measurment now that the airplane is painted and has the interior installed.  I got the oil changed and installed a quick-drain valve to make future oil changes more efficient and less messy.   With the cowl off, it was easy to disconnect the fuel line going to the engine-driven fuel pump and use the electric fuel boost pump to drain the fuel tanks before making the empty weight and balance measurements.  The final result came in 10 pounds lighter than I had estimated.  The original weight and balance measurments were taken before the airworthiness inspection was done in June.  I put 25 pounds of ballast in the seat area at that time to represent the interior and seat cushions and measured 1,150 pounds total weight.  We guessed at the weight of the paint to add 20 pounds to that original measurement in June.  Today's total empty weight is 1,160 pounds.  I had estimated 1,170 pounds and that should be just about right when the Garmin GNS-480 panel-mounted COM/NAV/GPS unit is intalled in the future. 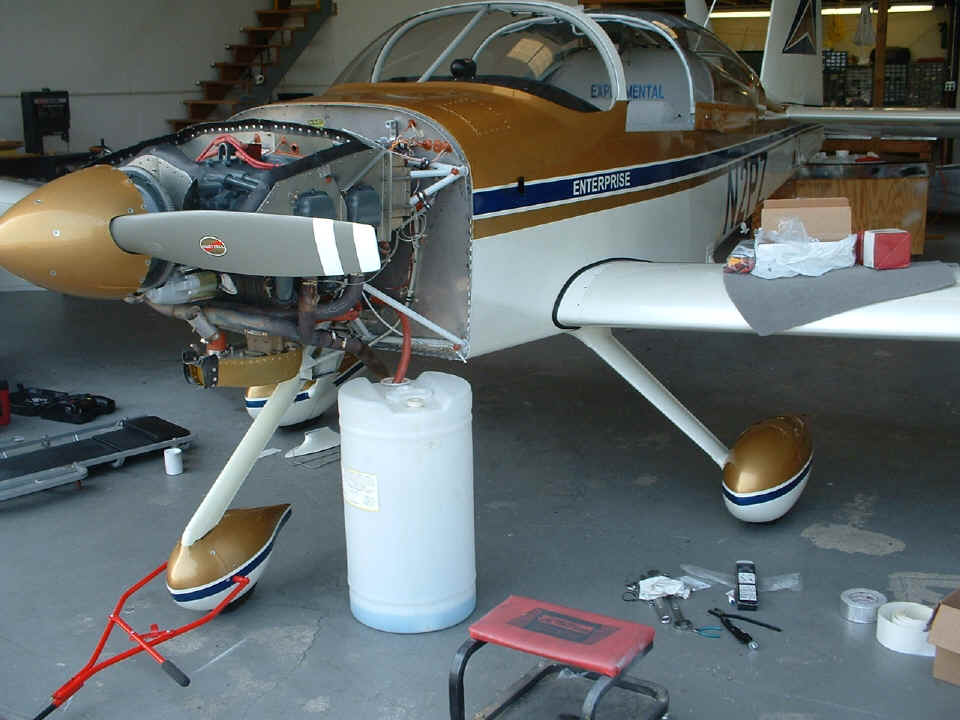 At the end of the day, I returned home to find that the motor on Wendell's hangar door had burned out and it was stuck in the open position.  Since he would be working on it tomorrow and possibly on Saturday, I parked my airplane outside the hangar.   I took this picture before making a quick trip home to pick up some of the gear I had unloaded from the Oshkosh trip.  I brought back my tie-down kit and canopy cover to get the airplane secured for a couple of nights outside the hangar. 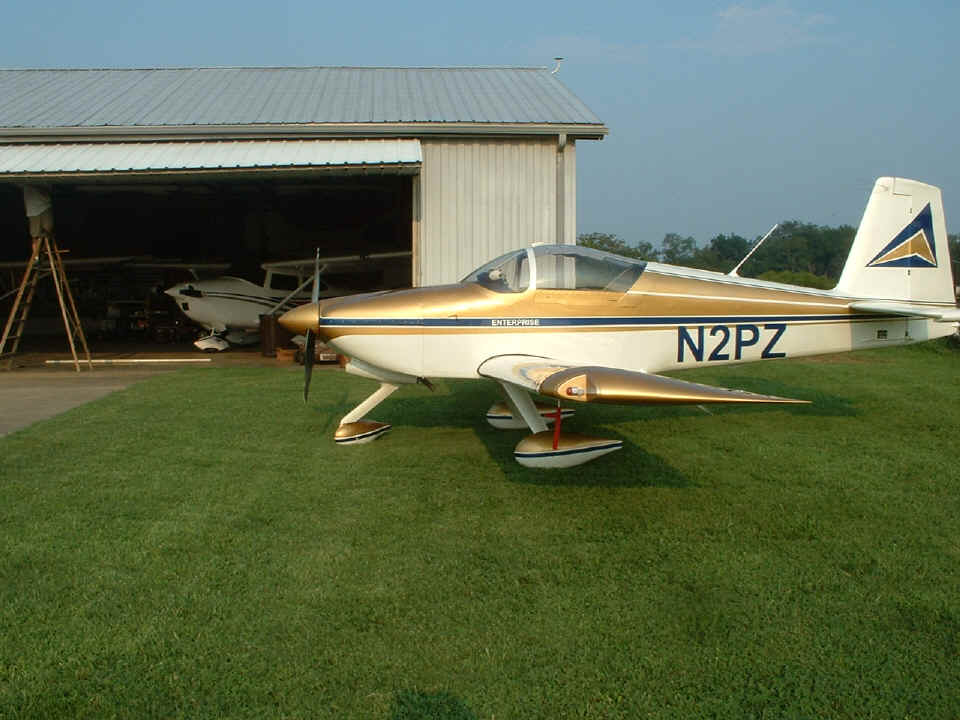 August 9, 2005:  It has rained a bit lately and the ceilings were low with some fog/haze when it was not raining.   The picture above shows the hangar door when the electric motor had burned out.   Wendell bought a new motor and installed it, but he needed me to wire in the new motor.  I did that a couple of  days ago and got all the steel cables straightened out.  We finally got the tension on all three cables correct again and all is well.

I finished wiring the ground wires from the "eyeball" map lights to a ground point I had previously installed behind the panel.  I removed the instrument panel to see how things were doing back there after flying so many hours to Oshkosh, New Jersey, Rhode Island, New York City, Pennsylvania, and then home.  My total work time on that was 2.2 hours.  Since the lights were never connected before, I have charged the time to the airplane construction project and updated the total hours on the home page.

Today is the first day I have been flying since the oil change and the recent weight and balance measurement at Collegedale.  The flight today was very short indeed -- back to the paint shop to clean up some minor things that would have delayed the trip to Oshkosh.  I flew the airplane over to Lyndon Wilson's grass strip at the paint shop with only 0.1 hours added to the Hobbs' meter.  I went over the airplane with Jeff while he made a list of the various little things that needed to be corrected in the paint scheme.  I will be working with Bill in the morning to review the list since he was not there when I delivered the airplane around 3 PM today.  Wendell had not flown his Cessna 182 for about a month and he chose to come over in it to get me rather than drive his car the few miles from his home to Wilson's paint shop. 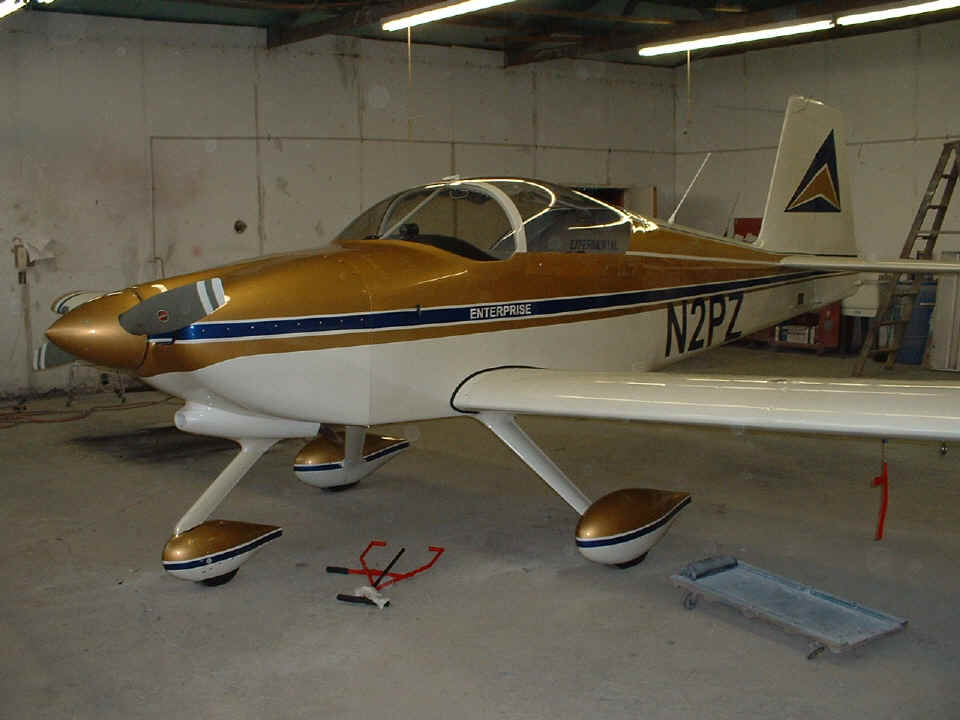 I cleaned off all the bugs and looked the airplane over very carefully when Jeff was making the list of things needing repair.  I will keep you posted when the airplane comes out of the shop.

August 10, 2005: I met with Bill at the paint shop as planned and we decided on the best way to resolve one of the trim issues on the airplane side stripes in the most efficient manner.  No other items were added to the paint rework list.  He thinks they should be finished with the job early next week (Monday or Tuesday).

August 12, 2005: I passed by the paint shop for a very short visit yesterday to find Jeff had removed the spinner nose cone and had sanded and filled all the pin holes.  He had also sanded and filled the problem areas on the fiberglass elevator tips.  I did not go by there today, but called instead around 3 PM.  Bill answered the phone and mentioned that he had finished the work on the BLUE paint and would be doing the GOLD in the next step.  He thought that he would be finished on Tuesday, allowing me to get my airplane out of the shop next Wednesday, August 17th.

I got an email from another RV-9A builder in Fort Lauderdale who is apparently getting withdrawal symptoms due to the lack of any new "travel pictures" posted in these pages.  What can I say?  Oshkosh AirVenture was a big deal.  I was going with the plane painted enough to look good, not perfect.  That is why it is back in the shop to clean up some of the minor issues with the paint scheme, etc.  As long as I had it that far away from home, going to the other places up by Lake Superior and over to the northeastern states was appropriate!  It was one REALLY GOOD WEEK of travel.   No homeland security searches, waiting in lines, or worrying about my checked baggage!  Of course I did sleep in a tent for four nights!

I will post more for you guys here early next week as things come together on the paint touch up work.  As for those who asked about where the paint shop is located, here is a map for you.  You can see that the paint shop is located just 6.5 miles from Interstate 75 EXIT 350, just south of the Tennessee/Georgia State Line.   I have put a 10-mile radius circle on this map similar to the one you would see on the ATLANTA SECTIONAL CHART if you look at the south side of the Chattanooga Class-C airspace on that chart.  You will see WILSON shown as a private grass strip on the chart at 795 feet MSL and 2000 feet in length. 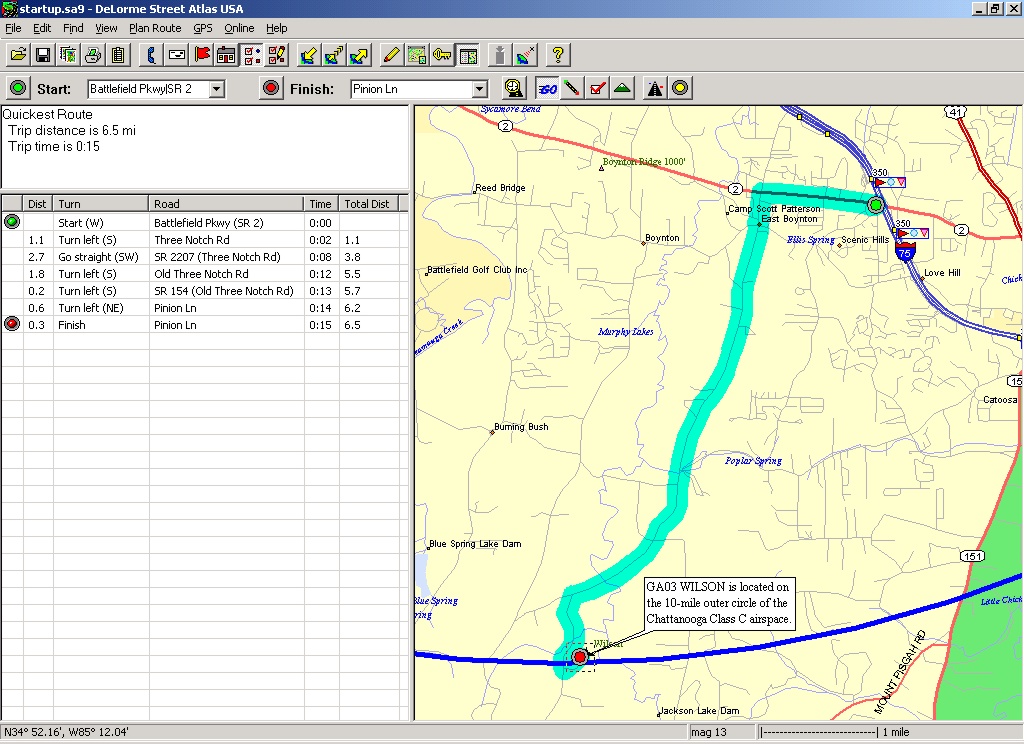 The coordinates on my map above are for the road in front of Bill Pinion's house near the paint shop which is adjacent to the runway.  If you are flying by here, the airport can be hard to spot since there are trees on both sides of the runway (East and West sides).  Both times I have been there I have landed from the north end of the field at 70 MPH.  I can get my RV-9A stopped just about in front of the hangar at mid-field.  If you want to drop in to see Bill Pinion, call first at 706-375-6879.   IF you hear the phone answered with "PAINT SHOP", it will usually be Bill or Jeff on the line.  If you are curious about the airstrip, look at the picture below which is also on my PAGE 150.  The view here is looking north, but unfortunately, my vertical stabilizer and rudder block the view of the north end of the runway.  Use the SCROLL BAR at the bottom of your browser window to see all the details of the photos below. 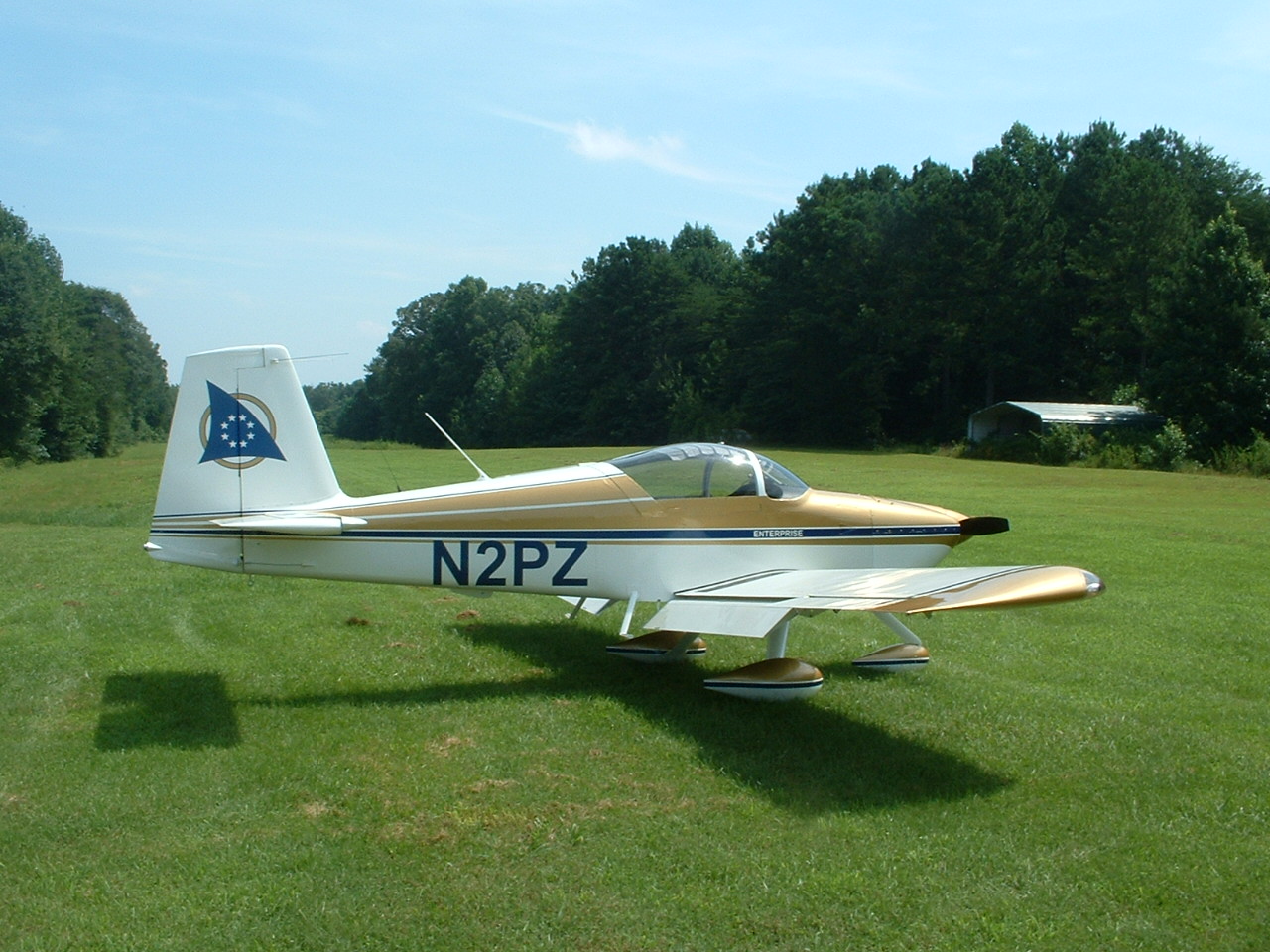 The view looking toward the south end of the runway is through my canopy only, sorry!  That road at the right of the picture is the end of Pinion Lane that comes from Old Three Notch Road past Bill's house and up to the paint shop/hangar that is not shown in either of these photos. 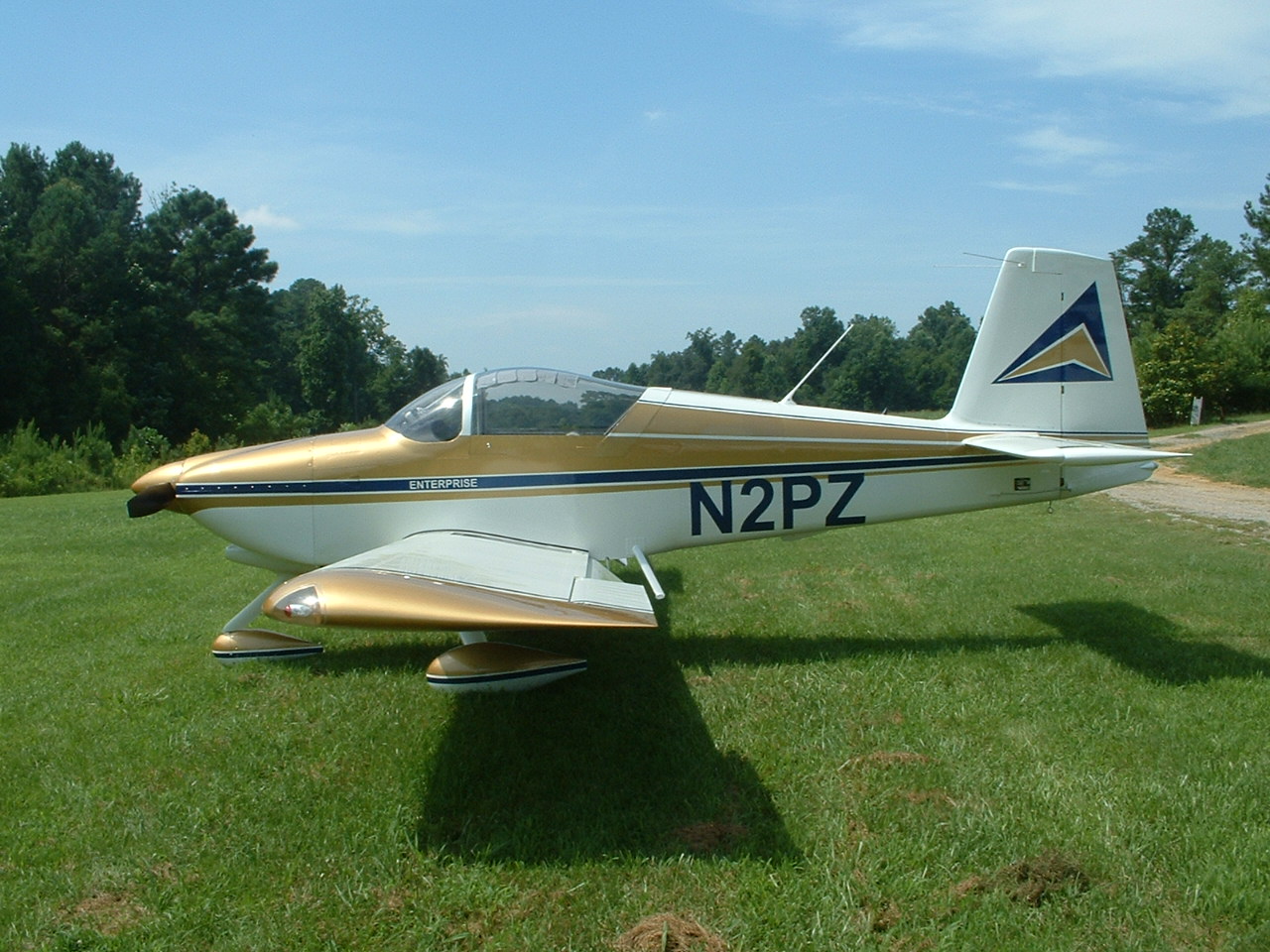