July 30, 2005:  We followed the southern coast of New England across New Haven, Connecticut toward Rhode Island.  I made a turn to put the city on the right side of the airplane to give Dale a better shot with his camera.  I noticed there was a big traffic jam on I-95 right below us.  Going at 160 MPH is a real treat! 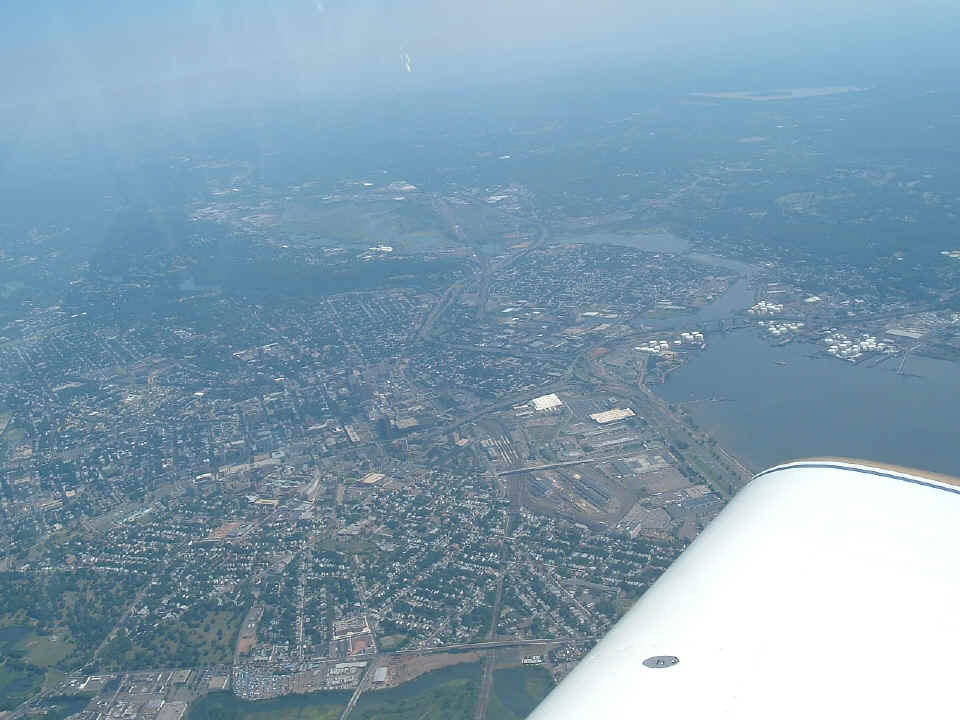 As I turned back on course, the New Haven airport was off the right wing for this shot.  You can also see how foggy it was out on Long Island Sound.  It was so bad that Long Island was completely obscured from our vantage point.  That was the way it was as we began the day, then reversed our course to fly up the center of New Jersey instead of trying to go up the Hudson River. 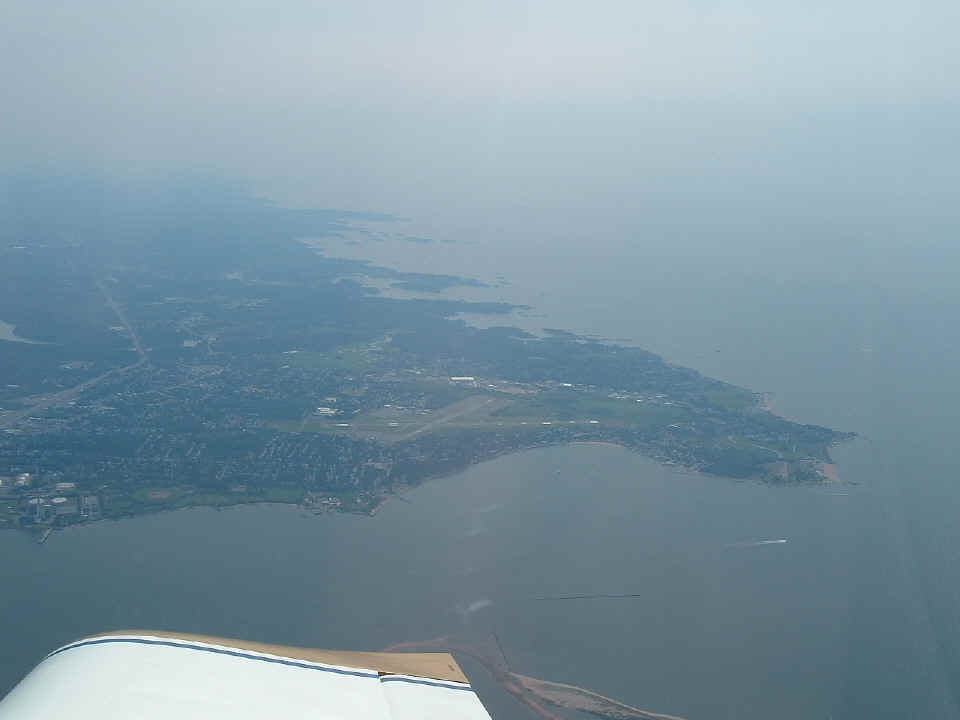 Here is the first beach on the southern shore of Rhode Island.  The Westerly Airport is just visible in the upper right corner of the picture.  That is the Pawcatuck River near the top of the photo, the state line between Rhode Island and Connecticut near the coast line. 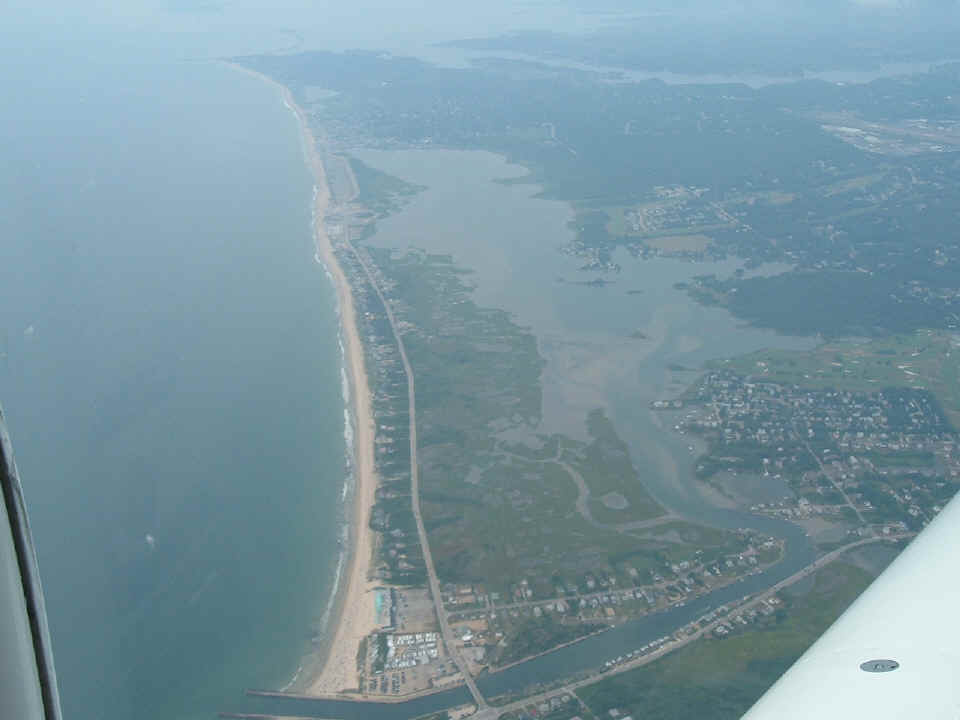 Dale wanted to fly along the beach for a photograph, so down we went since we were getting close to our destination anyway.  This reminded me of all the times I have flown down the beach near West Palm Beach at 1 mile offshore and 1000 feet MSL.  We were higher and a bit further off the beach when Dale took this photo.  I spotted a banner-towing airplane flying along the beach at about 500 feet MSL, but Dale did not get a snapshot of it. 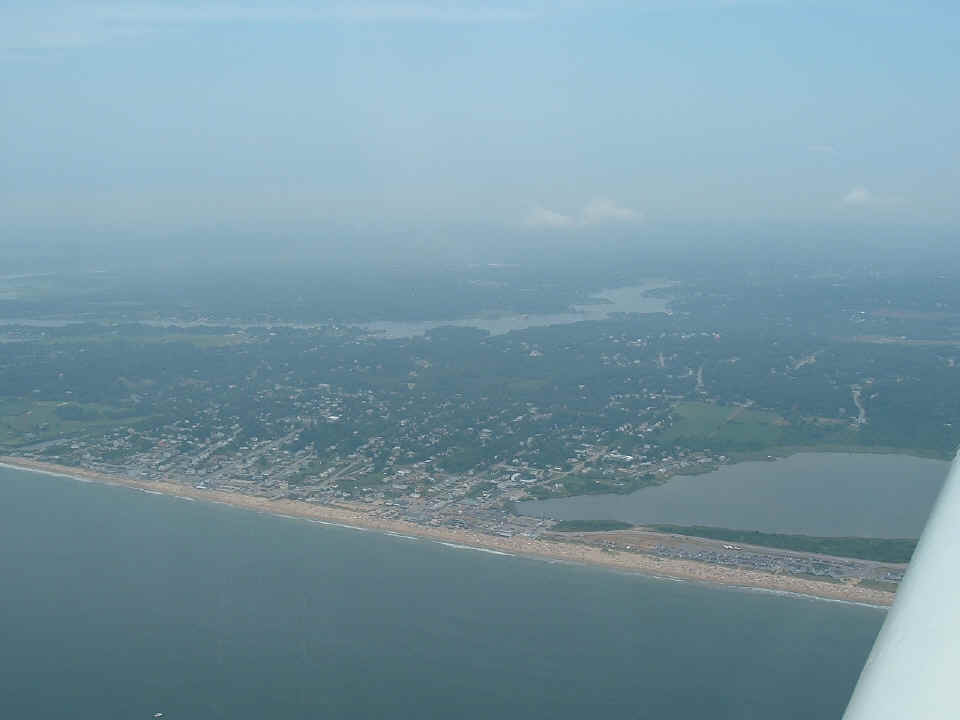 This is the Bonnet Shores area of Narragansett, RI.  This is the old neighborhood where our friend "used to live", but we did not find that out until we went to lunch with him. 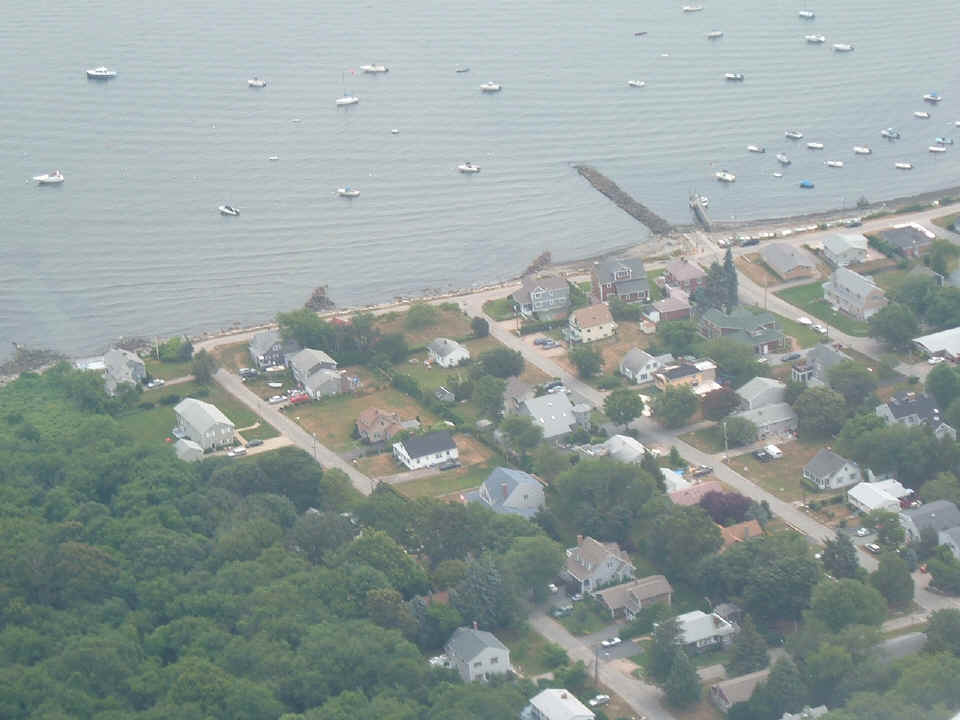 Speaking of LUNCH, we landed at Quonset State Airport, which used to be Quonset Point Naval Air Station before it became a public airport.  Our old friend Mike Donnelly picked us up there then drove us to his favorite neighborhood restaurant as you can see below.  You can see this is Duffy's Tavern located in Wickford, Rhode Island.   Mike could do well in the Ernest Hemmingway contest down in Key West, Florida.   Mike is wearing the hat.  My friend Dale Flowers is in the brown shirt. 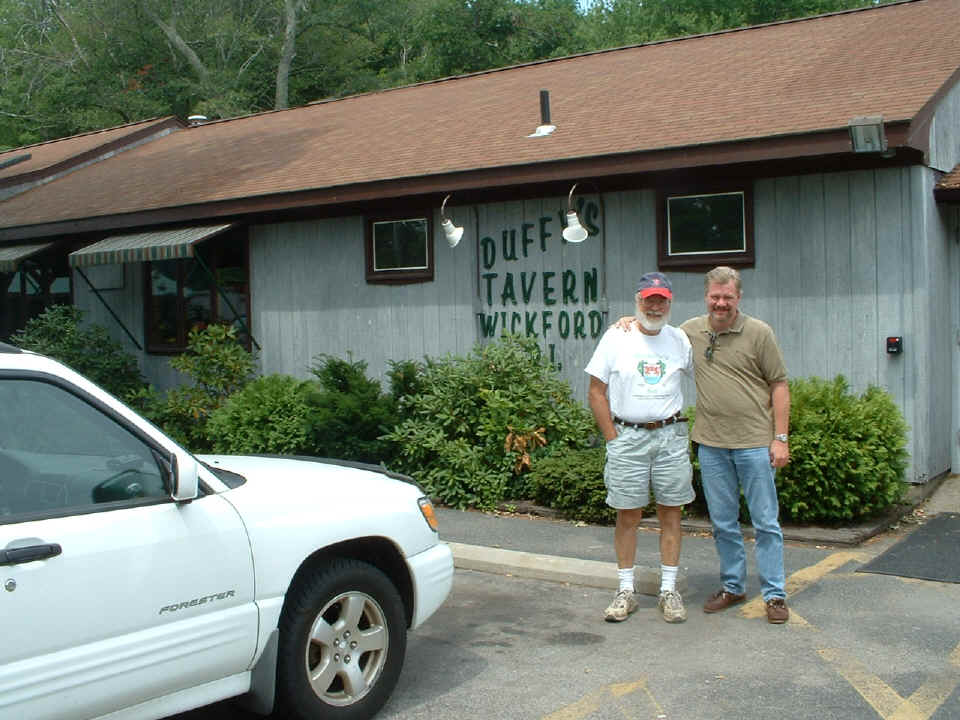 The seafood was great at Duffy's, but Mike wanted us to see his new house that he and wife Jan have been remodeling.  When they bought this house, it was similar to that dark "log" house in the background.  The inside had some amazing new features that Jan put in personally! 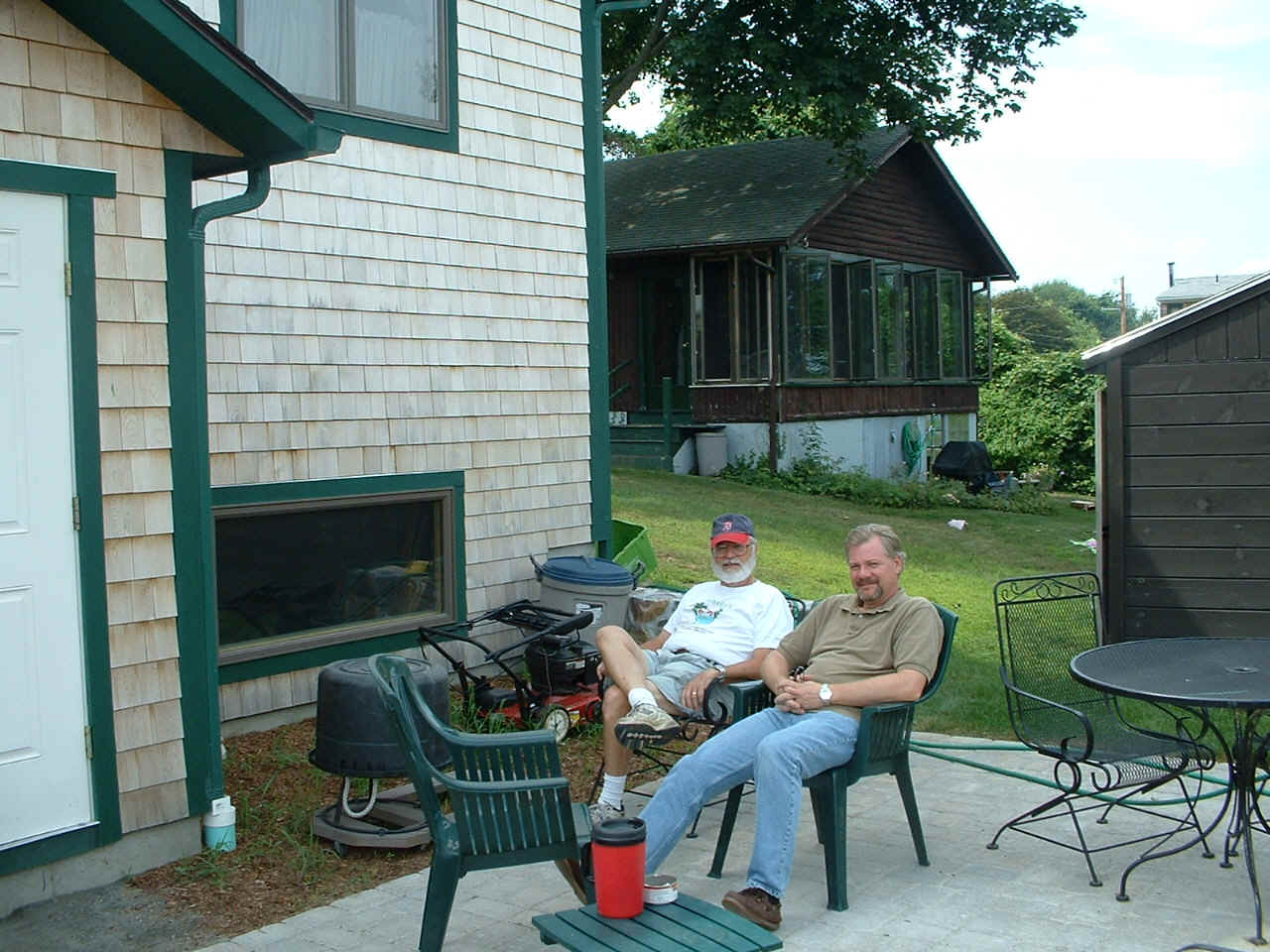 After seeing the house close up, it was time to take Dale and me back to the airport.  But of course, I offered Mike a ride and he brought his camera to get a few shots of the new neighborhood.  Dale took this picture as we were getting ready for engine start back at Quonset State Airport.  I had already secured the seat belts and shoulder harness on Mike before I did the same for me right after this photo was snapped.   You can tell just how much sun I got at OSH by the "goggles" on my sun-tanned face. 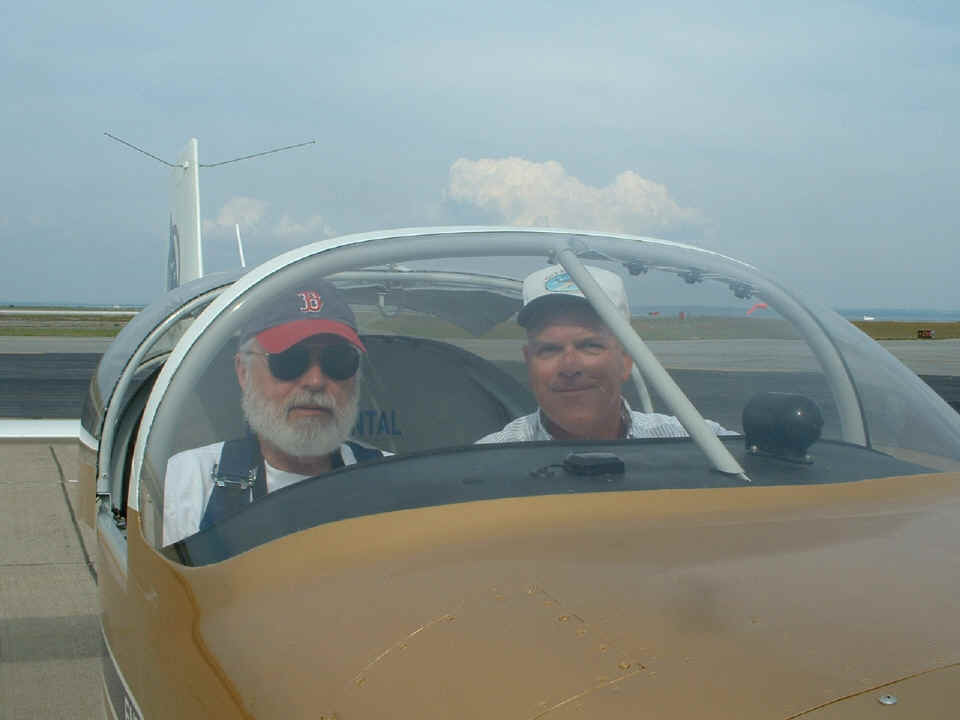