July 24, 2005:  This is my first cross-country trip outside of my test area.  It is a good one, all the way to Oshkosh, Wisconsin for AirVenture 2005!  This is the first time ever I have flown away from an airport and did not have to return in the same day.  I speak of course of being an airplane "renter" in the past with Cessnas from a flight school, not an owner of a fast RV-9A as I am today!

I got to the airport to finish building the rudder gust lock wires and drilled the holes in the rudder stops and the rudder arm on both sides.  It was 2 PM by the time the airplane was packed and ready to go.  I got lunch in Chickamauga, GA just a few miles from my home airport (grass strip).  I was ready to take off just after 2:40 PM.  Just as I was finishing my engine run-up, the neighbor from across the runway was preparing to depart for Oshkosh in his pickup truck with camper.  I made the short fight over to Collegedale to pay my fuel bill and top off the tanks for the first leg of my trip to Oshkosh.   It was around 3:30 PM (2:30 Central Time) when I left the runway at Collegedale.   I got trimmed up at 10,500 feet over middle Tennessee and relaxed long enough to take this picture of the freshly-painted wing of N2PZ.  This was when I realized I am leaving the State of Tennessee to actually GO SOMEWHERE!  I did not see another plane until I was west of Louisville, KY - and that one was a Boeing 767 belonging to UPS.  They have a hub located at the Louisville Airport.   Those two UFO's off my left wing are from a reflection from the inside of my canopy. 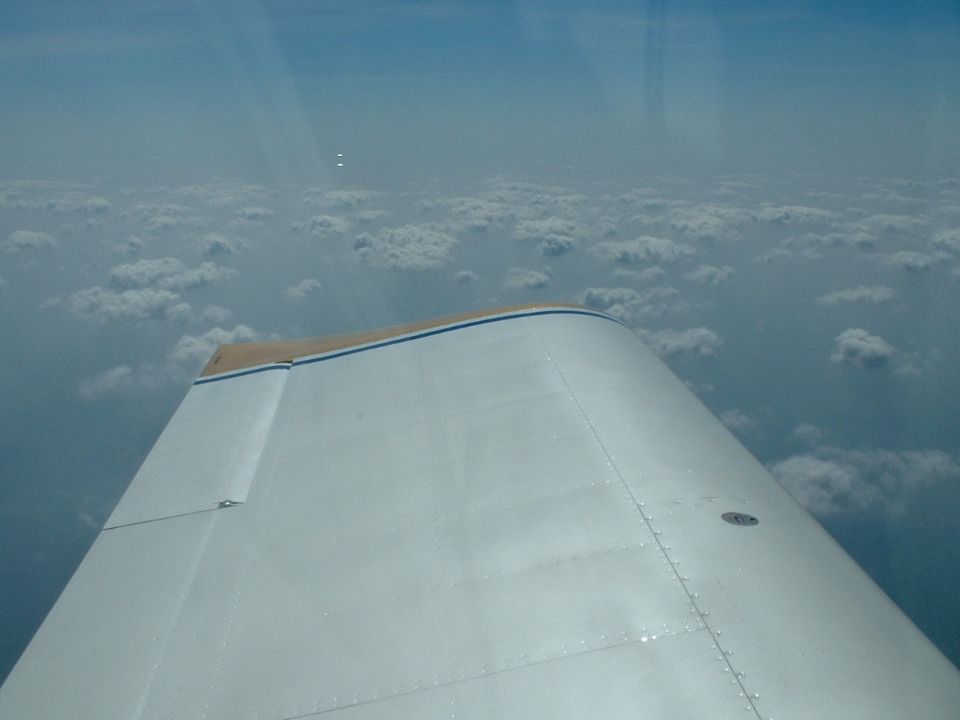 I made a fuel stop at Greencastle, Indiana (4I7) at Dixie Chopper Air for the best fuel prices within 300 miles!  I only needed 15.3 gallons for the flight from the Chattanooga area to this location about 40 miles west of Indianapolis.  The price for 100LL was $2.699 with full service.  The restaurant was closed, but I needed a quick turn anyway to beat the closing of KOSH at 8 PM.  I grabbed a fresh banana and refilled the ice in my 1-liter RED CUP and was on my way quickly. 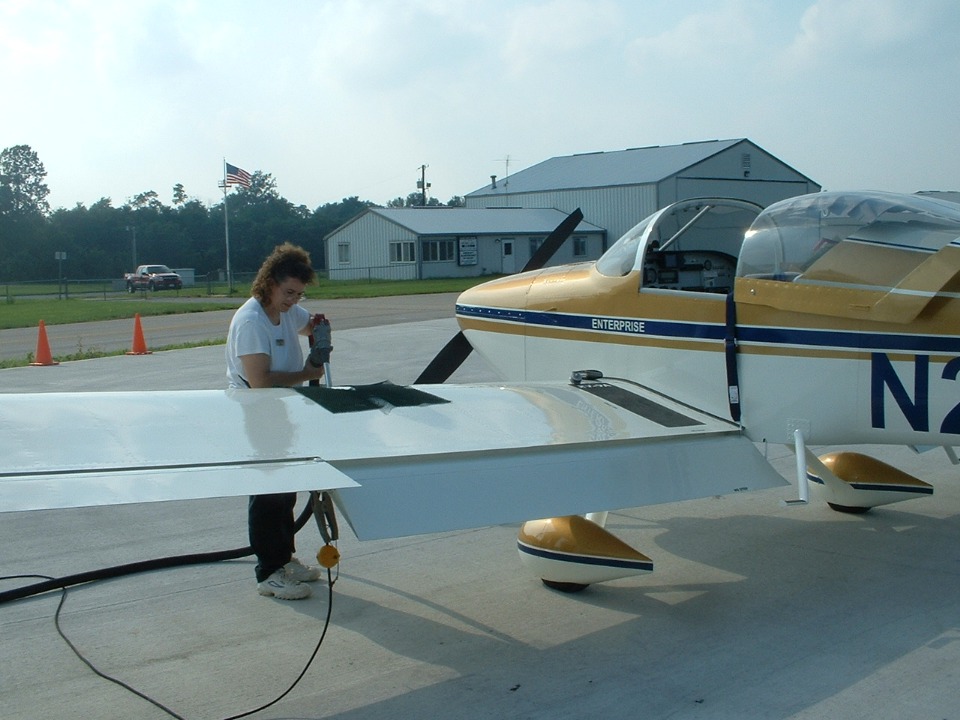 I crossed over Interstate 74 just East of the US 41 intersection and took this photo looking toward the afternoon sun.  The haze at 10,500 feet was not an issue, but it limited the visibility looking down.  VFR conditions were all along my route with only a few bumps near Janesville, Wisconsin. 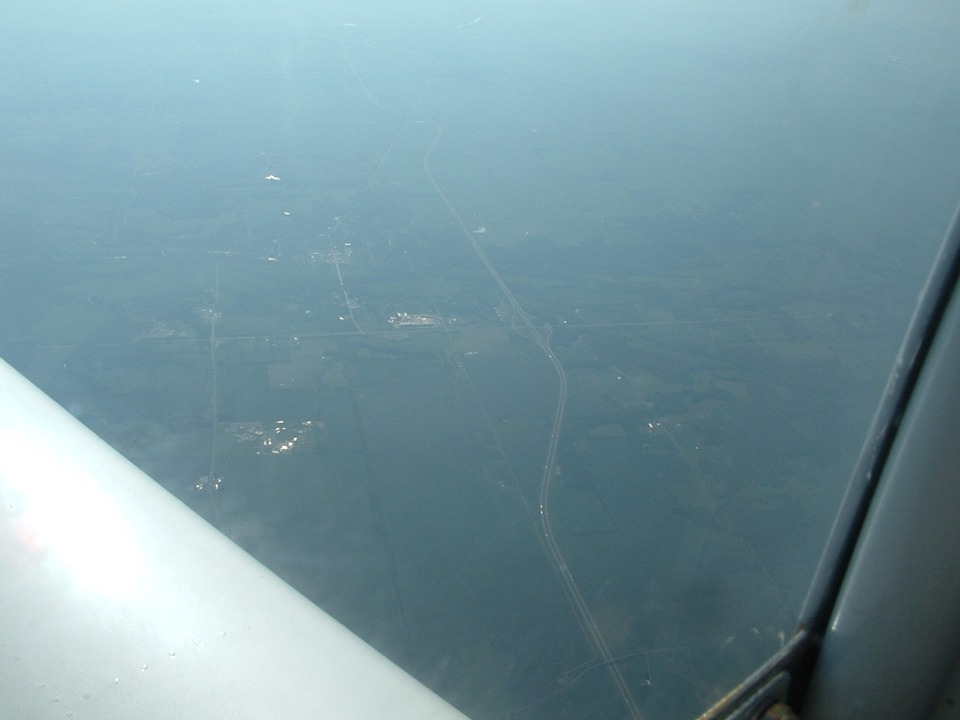 I saw an MD-90 at 11,000 feet heading into Chicago as I passed to the west of DeKalb, Illinois at 10,500 MSL.  At that point, I was headed directly for Ripon, Wisconsin for the VFR Fisk arrival to KOSH.  I was all alone in my slow approach flight from Ripon to Fisk and along Fisk Avenue to setup for a runway 36 landing.  I had to tell the tower I was there since they had cleared another plane to land while he was 1.5 miles away and I was on a short base leg approach.  I was the last airplane to arrive in homebuilt camping (HBC) around 7:35 PM Central Time when I shut down my engine and started to unpack and tie-down the airplane.  There were only three other airplanes on the end of the row where I parked.  Three out of the four were Van's RV-9A airplanes!  As of today, Monday, July 25th, Van's web site only shows 165 built and flown RV-9's and mine was number 155.  There are a lot more RV-9's here, mostly the RV-9A variety. 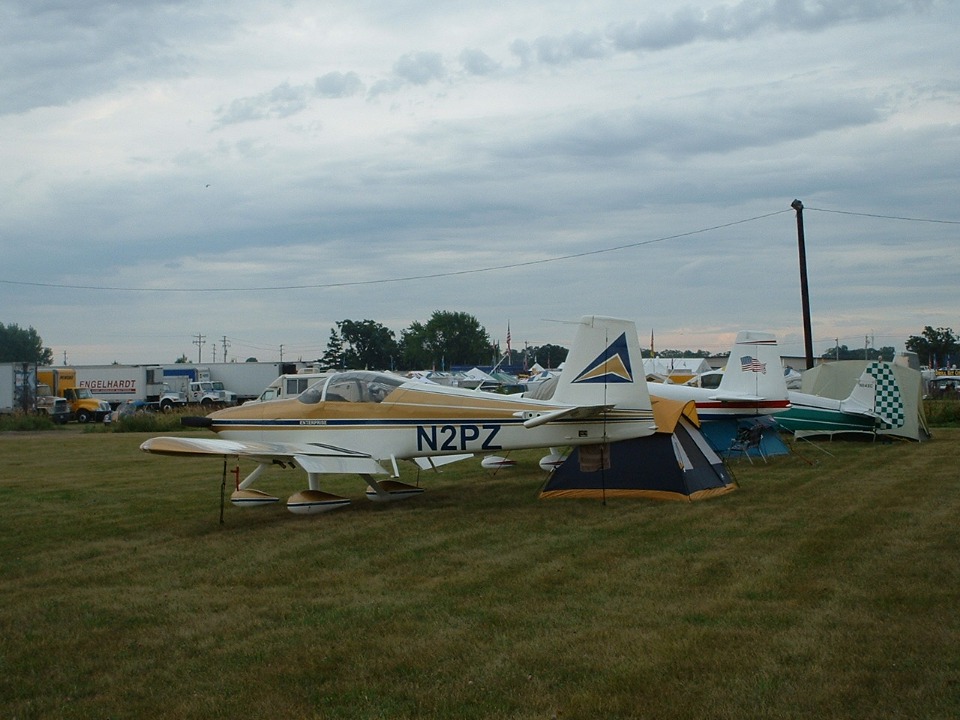 Several folks have commented on the fact that my tent matches my airplane paint scheme colors.  The light color on the tent is silver/gray instead of white, but it is close enough that they notice.  I have had several compliments on the GOLD color.   I got out the airplane log book for one guy to give him the color numbers so he could match his paint to mine when he paints his airplane.  These two pictures were taken during the day on Monday here at OSH.  When I was setting things up last night, I heard my name called and looked up to see David Edgemon coming toward me.  That RED and White RV-9A in the back center of the photo just above my prop and spinner is his airplane.  Fog delayed his departure Sunday morning.  My delayed departure was just me running behind getting everything sorted out and packed into the airplane.   The takeoff from Wendell Folks grass strip was a bit sluggish with the heavy load and the hot and humid conditions.  I noticed the same thing when I left Collegedale with full fuel tanks.  The Hobb's meter is now at 51.0 hours! 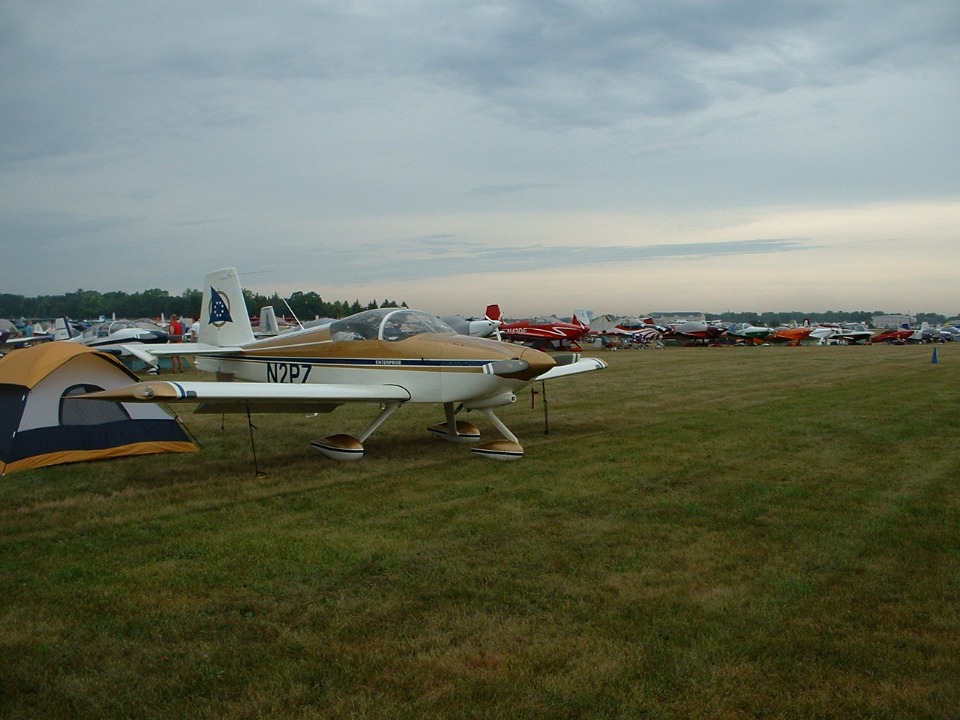 I am in the internet cafe for EAA members at AeroShell Square as I publish this.  It is now 2 PM Monday, July 25th, and time for me to get back out on the flight line to await the arrival of the White Knight and Space Ship One set for 3 PM Central Time.   More later...

July 25, 2005:  I got these pictures of a Mazda Rotary Engine installation on an RV out in front of Show Central and the OSH control tower. 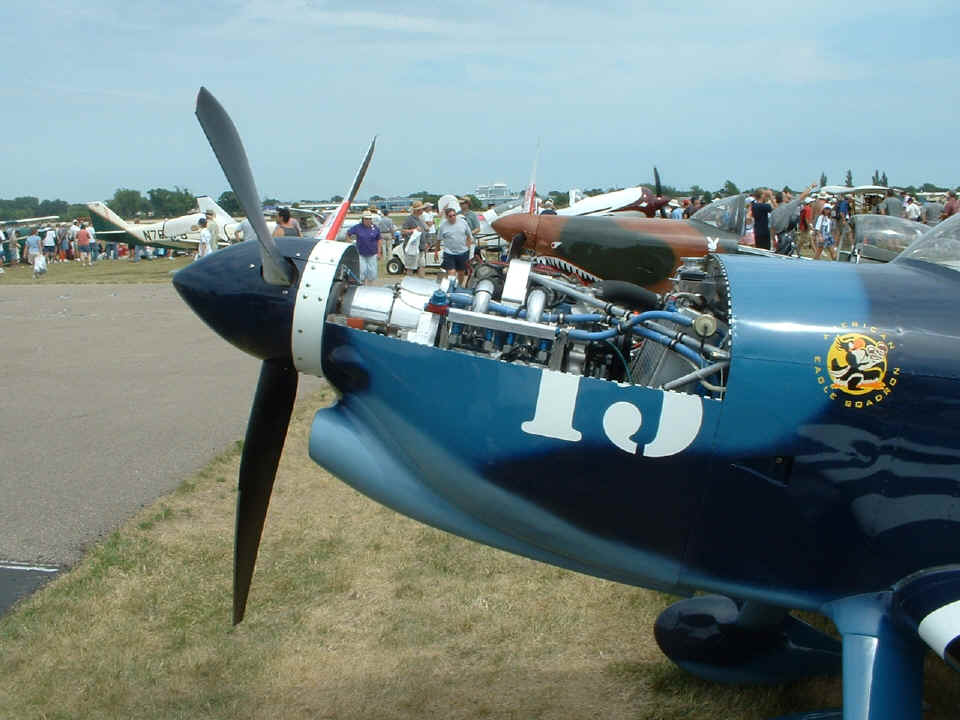 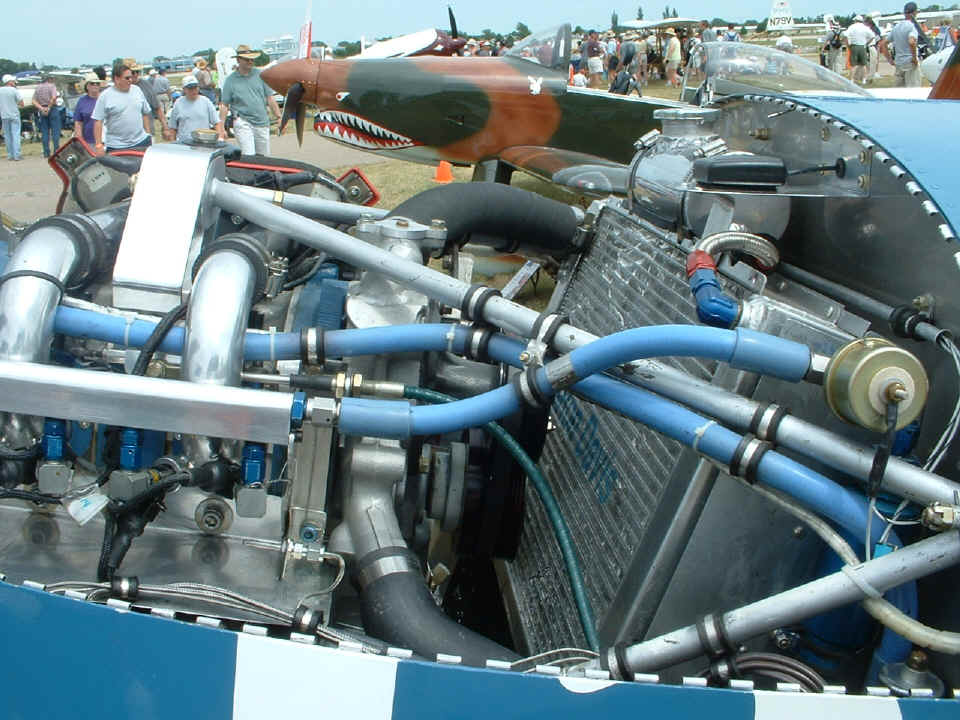 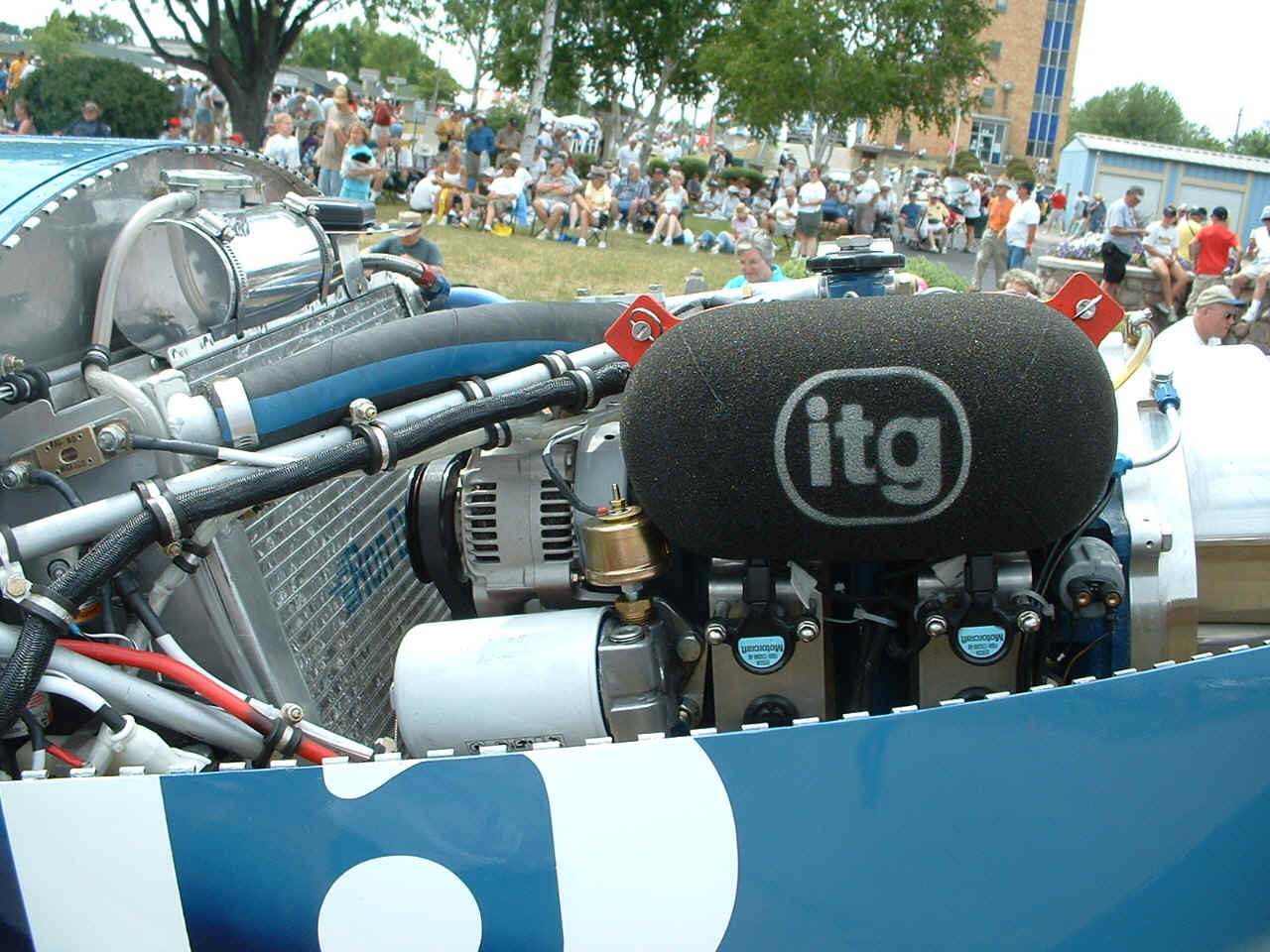 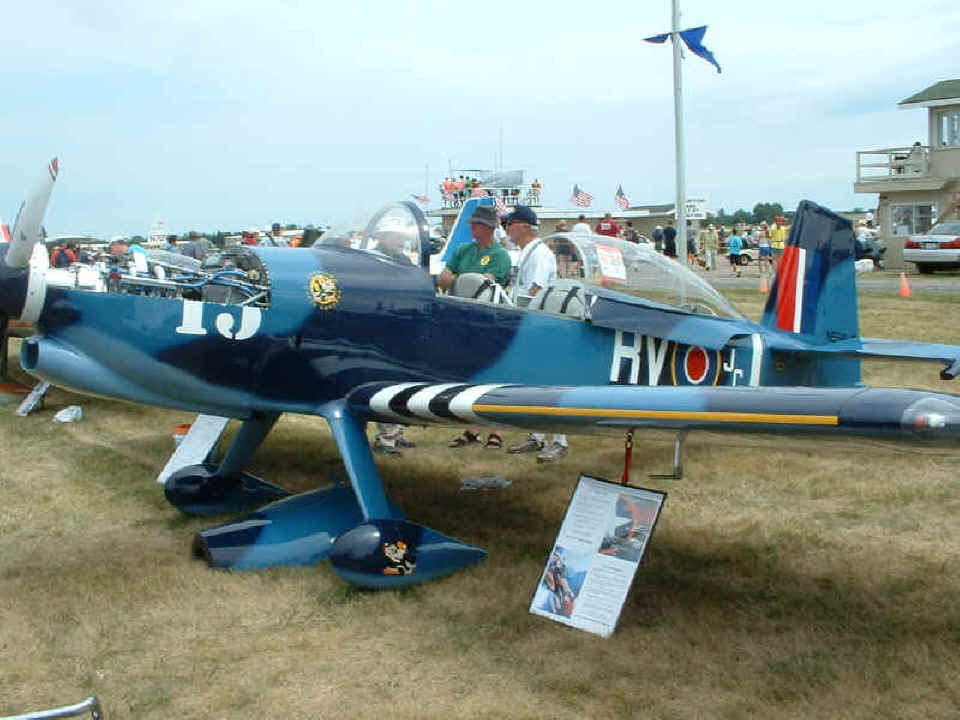