July 21, 2005:  The control surfaces have all been installed and connected again.  The elevators are connected to each other and the elevator pushrod.  The empennage fairing has been installed for the first time since painting.  This side looks really good.  When the elevator is neutral, the trailing edge of the elevator aligns at the center of the white stripe between the gold stripes on the rudder.  The "circle and stars" measures 24 inches from top to bottom.  As you can see, the circle fit nicely between two of the three rudder attachment bolt access cutouts in the rudder. 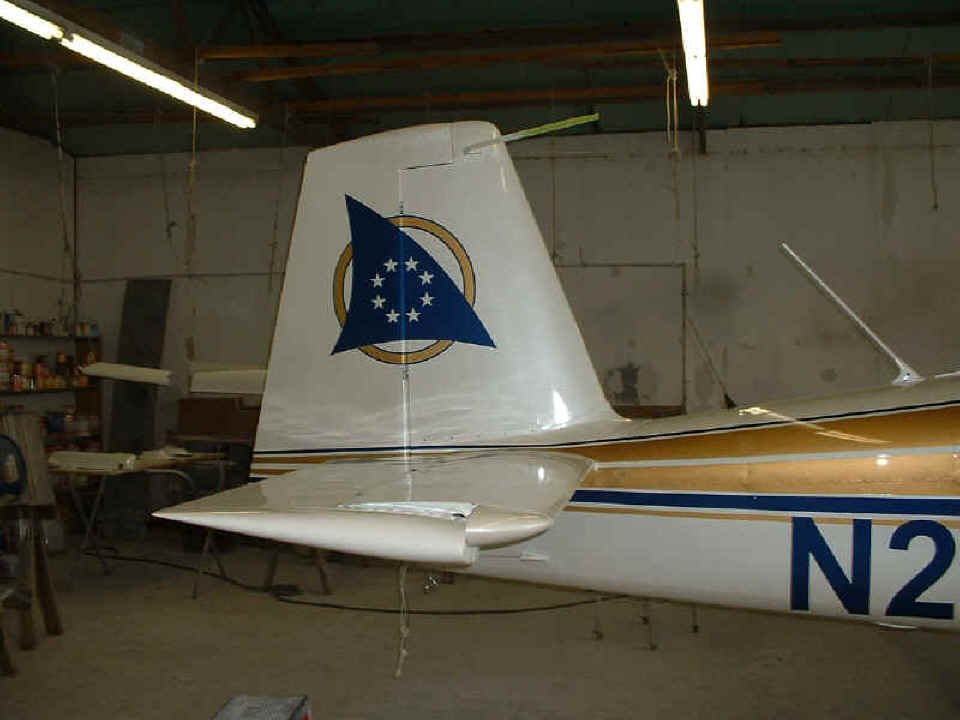 The other side has a pinstripe matching problem that Bill says we can fix tomorrow without removing the empennage fairing.  The rudder cables are connected along with the elevator trim tab linkage.  The "Delta Triangle" is also 24 inches from base to Apex. 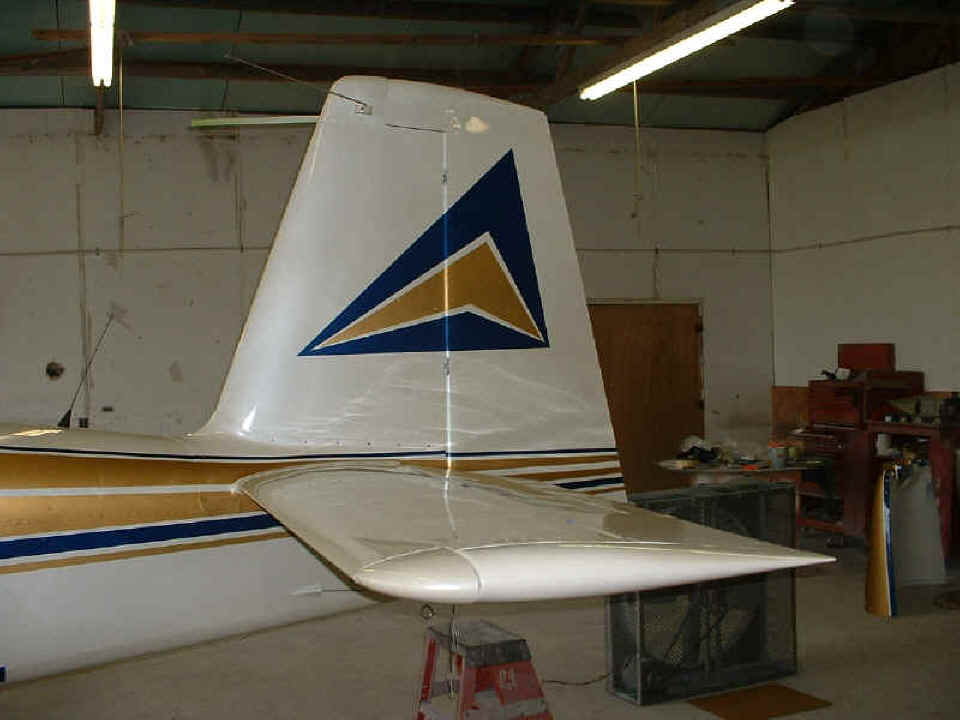 The view of the wing walk on the passenger side is pristine except for where I put my knee on it when reaching inside the cabin.  I have already tracked up the pilot side wingwalk when I was getting inside to connect the flap linkage for both flaps.   The upper cowl was on the airplane earlier, but has some rework to be completed early tomorrow. 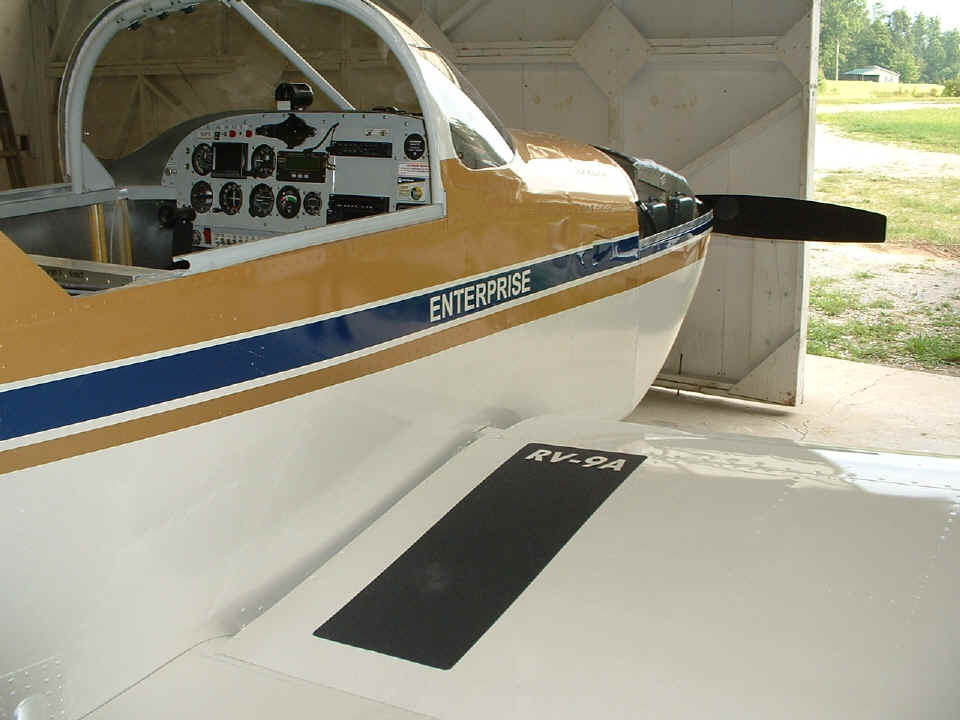 I was down on my creeper installing the clear UHMW tape on the wing overhang above the flap positions.  The tape prevents chafing of the flaps against the upper wing skin when the flaps are UP.  I also installed the clear tape on the upper and lower cowl directly behind the prop spinner backplate to protect the paint there when putting the cowl on or taking it off to service the engine.

Here is the view of the right wing tip with the marker light/strobe unit installed, and the clear lens installed.  The upper cowl is waiting in the background.  The spinner, along with the rudder cap, and the gear leg fairings are all in the back curing overnight after painting and clear coating.  The wheel fairings are completed and a will be ready to install in the morning. 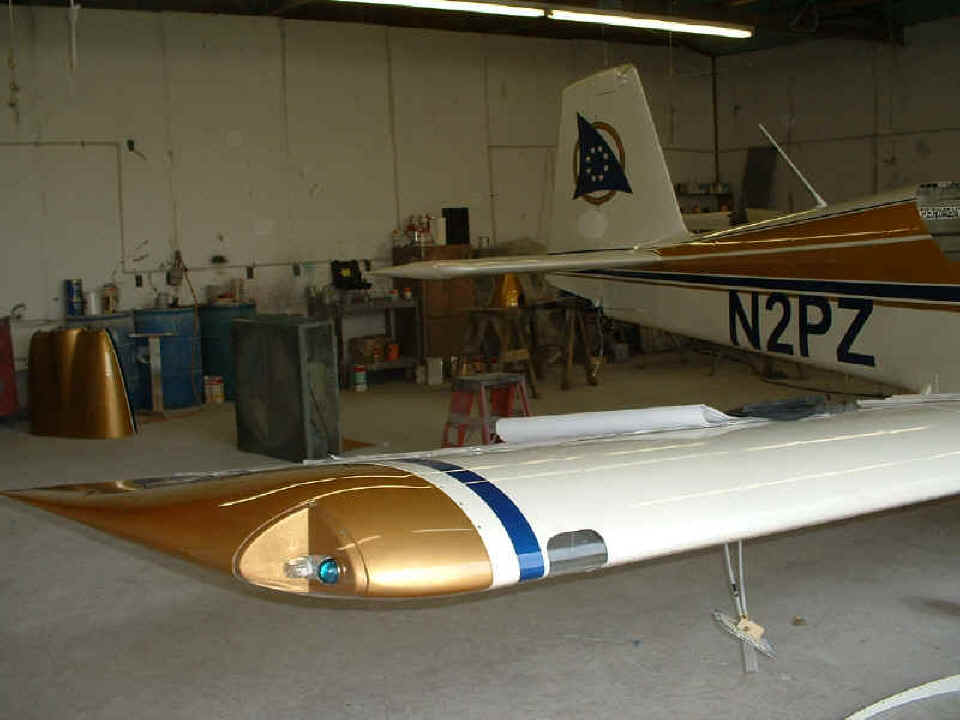 I am satisfied that I have the ailerons and flaps secured with the linkages adjusted properly once again.  Both wing tips are on and the tip lights and strobes have been tested.  I may actually get a chance to install some of the interior tomorrow while the touchup work to the paint is completed.  We will decide if the airplane is ready to fly out tomorrow based on the paint hardness, etc.

July 22, 2005: What a day!   I really thought we would get out of the shop today, but there is always something else needed.  This is the nose gear leg fairing.  I put a couple of layers of the clear UHMW tape on it to prevent scratching of the paint when the cowl goes on and off for engine maintenance, oil changes, etc. 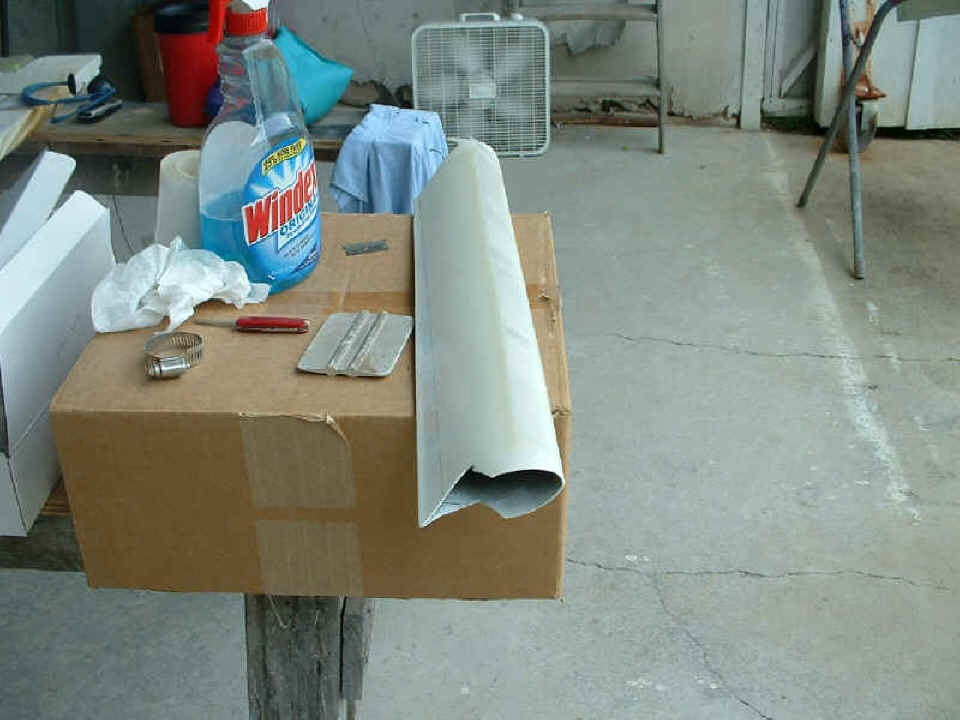 The gear leg fairings and the wheel fairings are now all in place as is the top of the cowl and spinner.  This is the first picture of the canopy installed and closed.  The white and blue pinstripes on the side matched the canopy as planned on this side, but not on the other side. 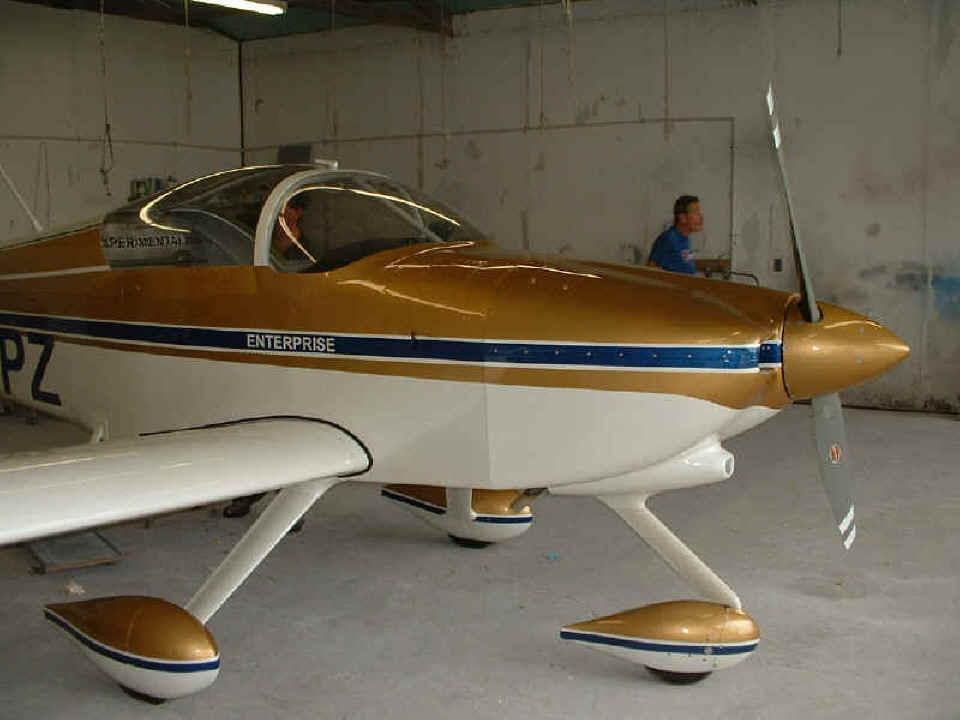 After the corrective actions for the other side were decided upon and suitable wet-sanding and taping were accomplished, the prep work to fix the paint stripe misalignment began with the canopy in the Meske tip-up position. 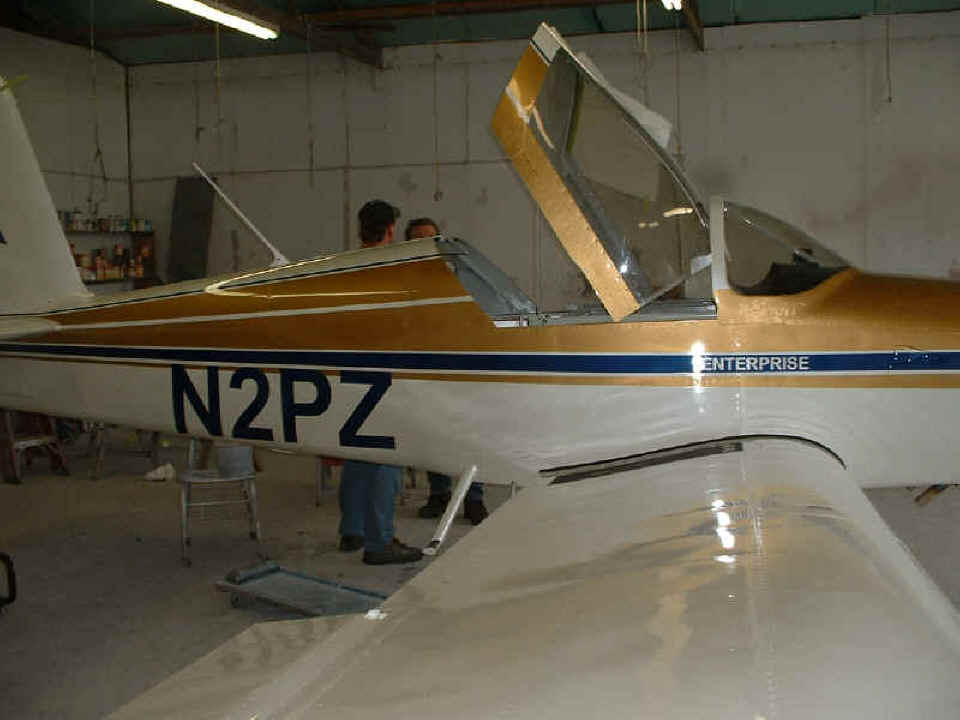 Here is the wing walk with suitable "NO STEP" warnings attached to the wing and flap.  The LEFT wing and flap got the same treatment. 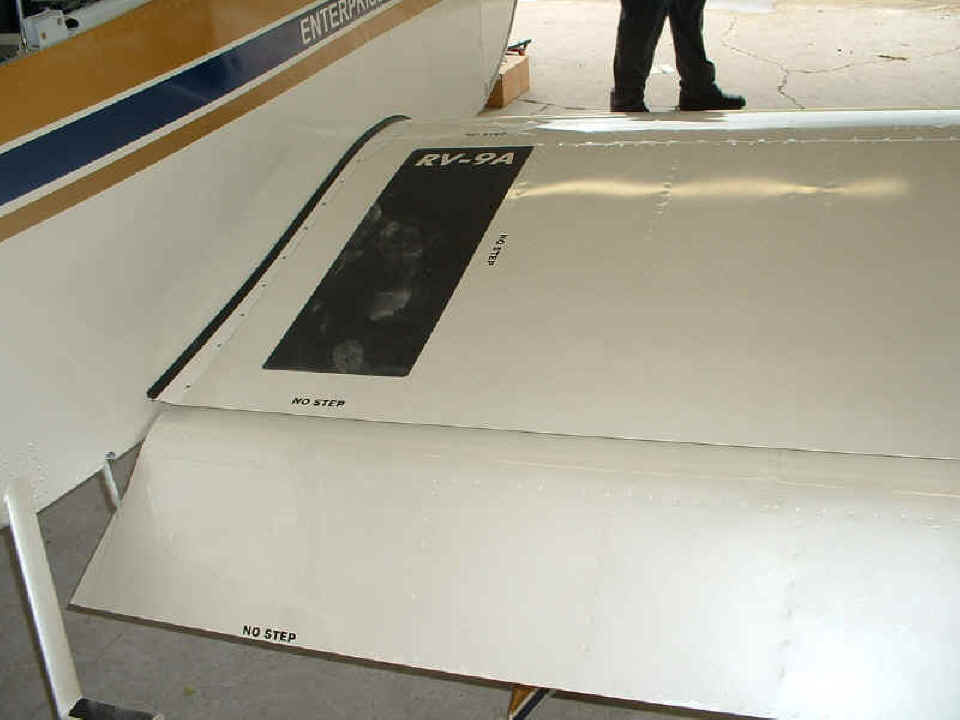 The last photo of the day shows Bill putting on the first coat of paint to fix the stripe problem on the left side.  The plastic painter's "drop cloth" and some taped-paper cover all the areas against overspray.  He said he will have all three colors repaired and clear-coated before he quits tonight.  We agreed I would return at 9 AM tomorrow, giving him an extra hour to "sleep-in" before I arrive to get the airplane. 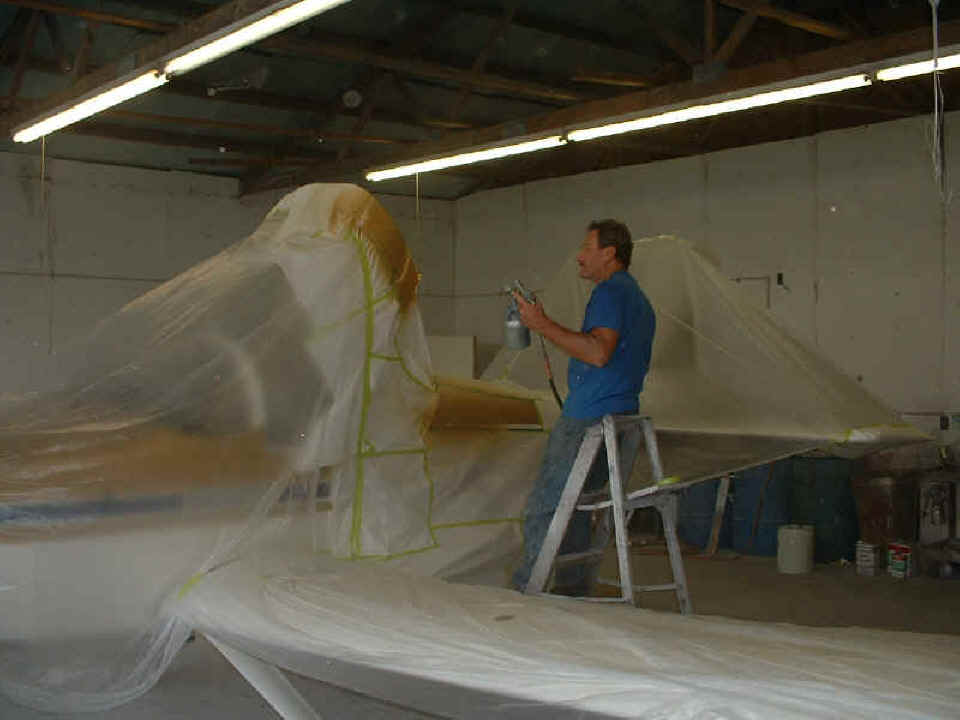