June 30, 2005:  Two flight sessions today.   The first one was 3.9 hours around much of my test area.  The second session was 2.2 hours hopping around to airports for two stops and two touch-and-go's to get them in my pilot log book.  I started timing how long it took to get to the gaps in these clouds to learn how to estimate distances to the cloud formations and my separations with them. 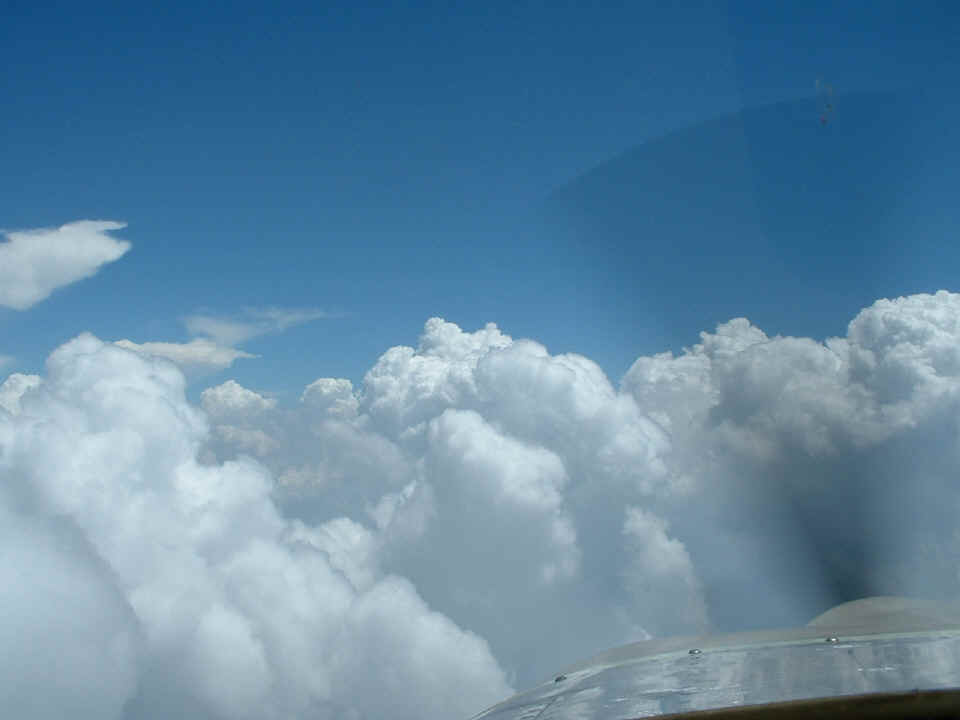 This classic summer thunder storm with it's "anvil head" was off to my left as I was hugging the Kentucky state line before I reached Jellico, TN.  I was listening to Indianapolis Center during this part of my flight and heard the controller announcing a SIGMET for this storm.  I took this photo while cruising at 13,500 feet at 165 MPH true airspeed. 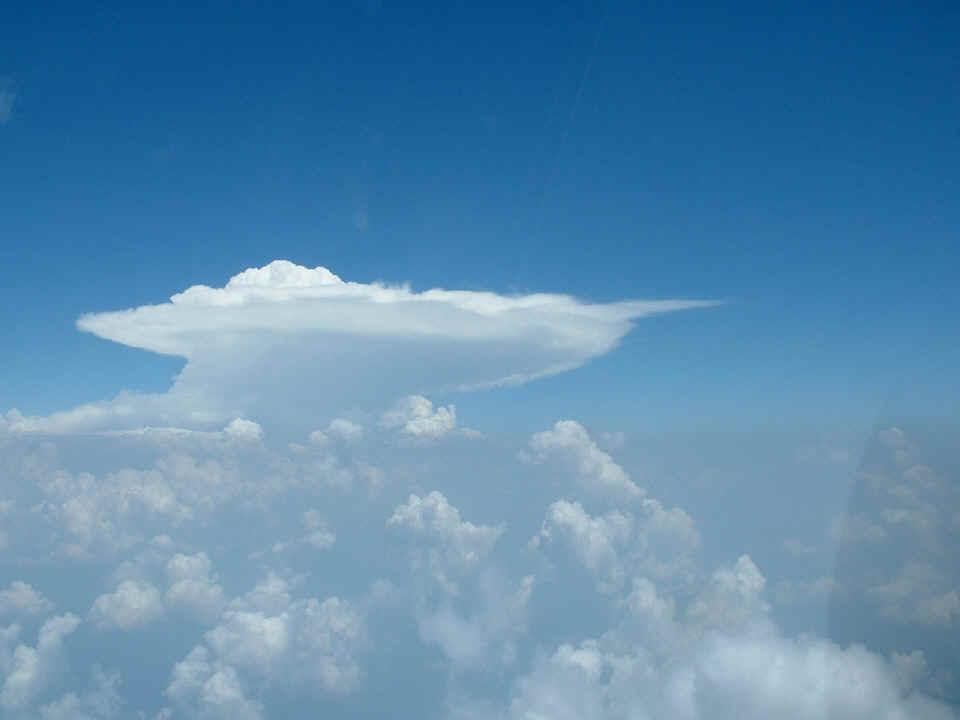 This picture was not taken when I was grounded during fog and rain.  It was taken with a cold camera in a hot and humid environment at Campbell County Airport near Jacksboro and LaFollette, Tennessee.  I had just descended from 13,500 feet as mentioned above.  I slowed down and circled down to about 3,500 feet over the town of Jellico, then followed I-75 south along the top of a mountain to this airport.  When I took the picture, I thought I was just in the bright sun and could not see the LCD screen well.  I looked through the optical rangefinder to shoot this picture of the FBO at the airport.  The only fog was on the camera lens of course, but I did not discover it until I uploaded the photo to my computer for this posting. 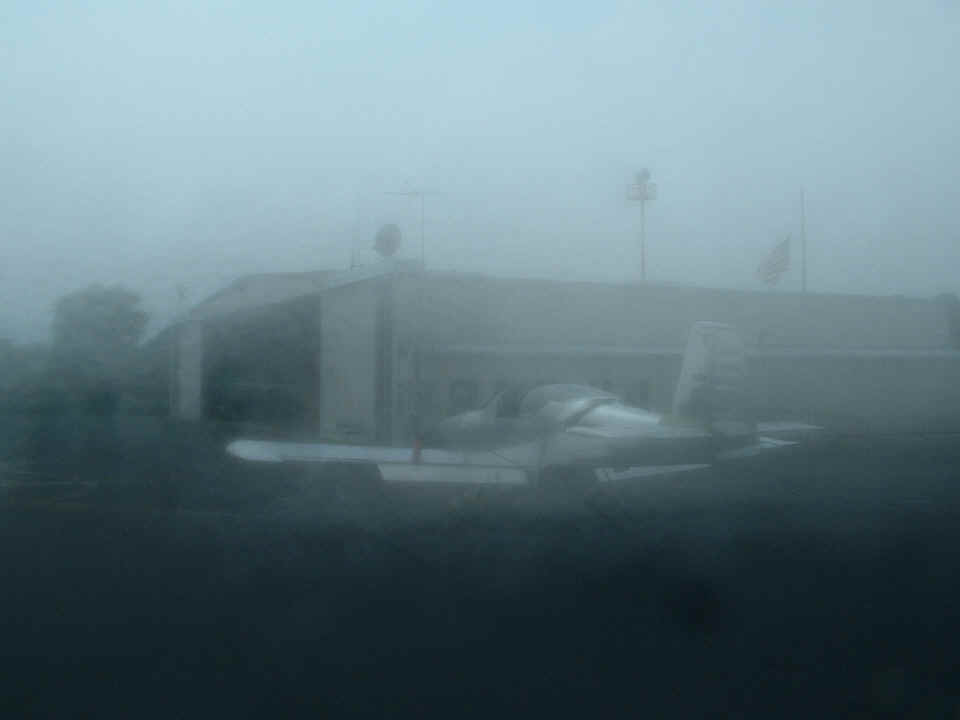 After a quick break at Campbell County, I made a short flight over to Sevierville/Gatlinburg/Pigeon Forge (KGKT) Airport to see if they had any good snacks for sale, but no luck there.  I did get this picture.  The guy on the ramp put the wheel chock on there for me.  Of course I started the engine up when it was time to leave, then remembered the chock only to shut the engine down immediately without even trying to taxi!  While I was there I had a nice conversation with a couple who were flying from Tupelo, Mississippi to New Jersey.  From here I returned to Collegedale Airport to complete 3.9 hours of cruising around my test area that started around 11:30 AM from Collegedale. 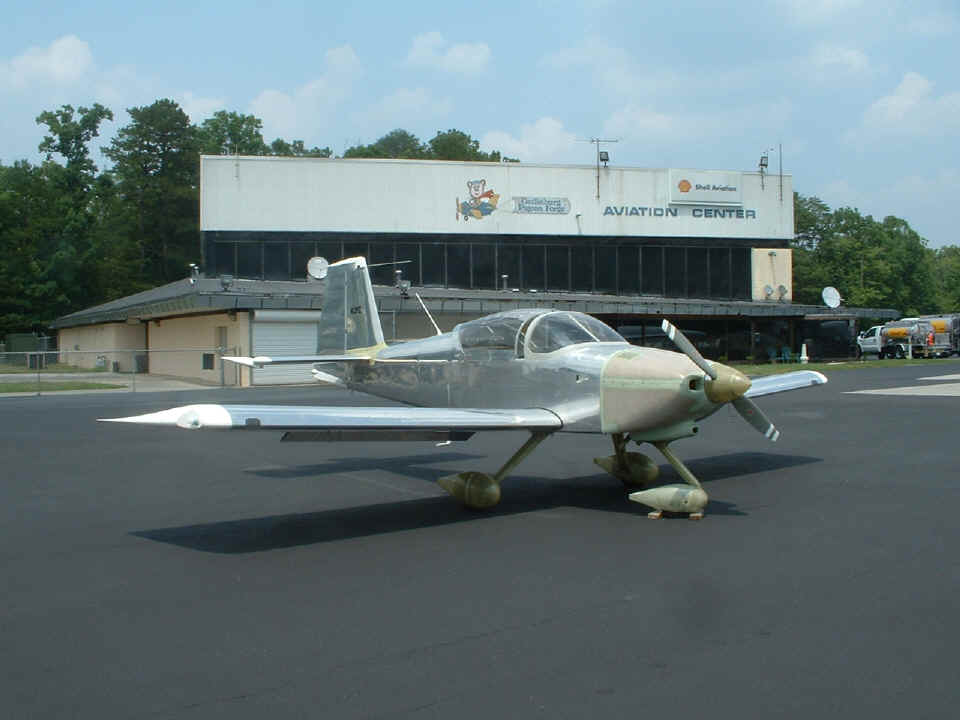 After refueling the airplane and me with a sandwich and a sugary pastry, I headed out for what became a 2.2-hour jaunt in the haze of the late afternoon.  The first stop was Tullahoma Airport (KTHA) which is an old WWII airbase for B-17's and B-24's.  One of their three runways is closed permanently.  Runway 18/36 was open, and runway 6/24 is being extended at this time and is temporarily closed for construction.  I never got up into cold air on this ride from 3M3, so the camera lens was not "fogged". 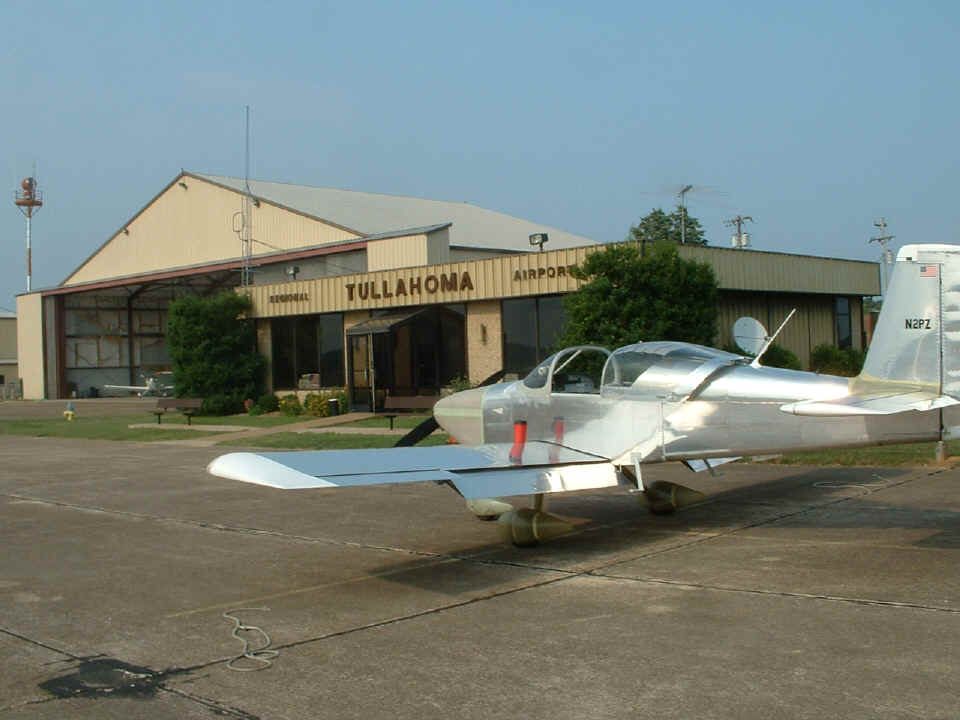 I jumped over to the airport at Shelbyville again for a break after the stop above, then headed back to 3M3 via touch-and-go landings at Warren County/McMinnville (KRNC) and at Crossville (KCSV).  The total flight time for the day was 6.1 hours and that brings the Hobbs meter to 35.9 hours of Phase 1 testing.   The total flying today was around 820 miles.  The total for today and yesterday is 1280 statute miles in 10.1 hours of flying.  If the weather is okay for tomorrow, I will finish the required 40 hours and be free to roam about the country!

July 1, 2005:  The flight today was interesting, but I did not take any pictures during the 4.2 hours I was aloft.   The departure was to the northwest up to the area around Livingston, Tennessee up near the Kentucky state line NE of Nashville.  Since there was a cold front coming down from the northwest, I figured I would fly up to meet it, then fly parallel to it about 20 miles ahead of it.  I climbed to 12,500 feet going up there, then turned on a heading of 185 degrees to remain at that altitude.  I was monitoring Memphis Center as I passed south of Interstate 40 when I heard the controller talking with a Delta Airlines pilot of an MD-90 passing through the Nashville area at 11,000 MSL.  About one minute later I was looking down on this jet passing just behind me from left to right under my flight path.  That was a first, me in a propeller-driven aircraft going 165 MPH true airspeed, looking down on a jet airliner doing more than 250 knots!  What a hoot!  I love this RV!

I continued my flight on that heading until I neared the Tennessee/Alabama state line, then did a 180-degree turn and flew parallel to the front back up to the Kentucky state line.  I turned East and flew along about five miles south of the state line dodging some towering cumulus that was now rising above my 13,500 MSL flight path.  I finally got past all this building weather when I passed I-75 heading into East Tennessee.  I stayed on the Easterly path monitoring Indianapolis Center until I reached a point over the Rogersville, Tennessee airport.  That is where I turned on a direct course for Collegedale Airport and decended to 12,500 MSL for the ride home over the top of the Knoxville Class C airspace.  When I arrived on the ramp at Collegedale, the Hobbs meter had 40.1 hours on it.  Phase 1 testing is now completed and I can now get out the state of Tennessee!

It was after 2 PM when I got out of the airplane and took a break.  Rich Nadig was in the air-conditioned lobby of the FBO and asked if I wanted to calibrate my fuel gauges now that I had just flown for 4.2 hours.  After that flight, there would not be too much fuel remaining in my tanks.  When we got them pumped dry down in his hangar, we measured 14 gallons.  It required an additional 22 gallons to fill both my tanks, three gallons at a time, to finish calibrating the gauges.  It all went well according to the instructions that came with the EI fuel gauge.  That was an average of 5.24 gallons per hour of fuel used on the flight today.  All that flying at high-altitudes really required a lean mixture setting.

July 2, 2005:  I came back to the Collegedale Airport on Saturday morning to finish cleaning up the airplane and to put the cowl back on it after trimming some on the cowl and the front of the engine baffle plates to allow the lower cowl to go on and off easier.  I also opened up the slot on the bottom of the cowl that provides clearance for the nose-gear leg.  I took about four hours doing all this work, and finally stopped for lunch around 1 PM.  When I came back from lunch I waited for a passing rain shower while updating my aircraft log book to show the end of Phase 1 testing.

Down at the hangar, I rolled the RV-3 out of my way and pulled my RV-9A out of Rich's hangar to fly it to its new home.  I put the RV-3 back in the hangar, locked the hangar doors, then got into the RV-9A and cranked it up to taxi to the flight line.   I reached the ramp area by the fuel pump when the engine quit.  I had taxied up there on the fuel in the engine driven fuel pump and the carburetor.  I had left the fuel selector valve in the OFF position when we were finished pumping the fuel out of the tanks on Friday afternoon.  I switched to the LEFT tank, turned on the boost pump, and had the engine running in just a few seconds.  After a runup check, I pulled onto runway 3 and headed South to my home town of Dalton, Georgia and to the airport there (KDNN).  I had a short visit with the airport manager, Harvey Holman.

About the time I was finishing my time with Harvey, I got a call from Wendell Folks telling me that he had finished mowing his grass strip and was waiting for my arrival.  I cranked up and took off from Dalton on runway 32, then turned around to approach 14 from the opposite direction to check that both the localizer and glide slope signals were being received on my Garmin AT SL-30 receiver.  Both needles were alive as I dived back down on the field and flew along about 100 feet over the runway at 197 MPH!  What a rush!!!  I got over to Wendell's strip and pulled the airplane into the hangar before getting a ride back to the Collegedale airport with another pilot who was driving over there to fly this afternoon.   It was not long before another pilot I know came by to chat and I ended up staying there until almost 8 PM discussing places to GO now that I am no longer restricted to Tennessee airspace.   We agreed that we would be going to a July 4th fly-in down at Pickens County Airport near Jasper, Georgia.  I figured I would get in ONE event before putting N2PZ into the paint shop on July 5th.