June 9, 2005:  When it is all over, there is that relief that comes after a long road has been traveled.  It was a short flight, but a milestone I will never forget!  The only problem:  I wore the wrong hat.  I should have had my "I'd rather be flying my RV-9A" hat I got in Oregon last week. 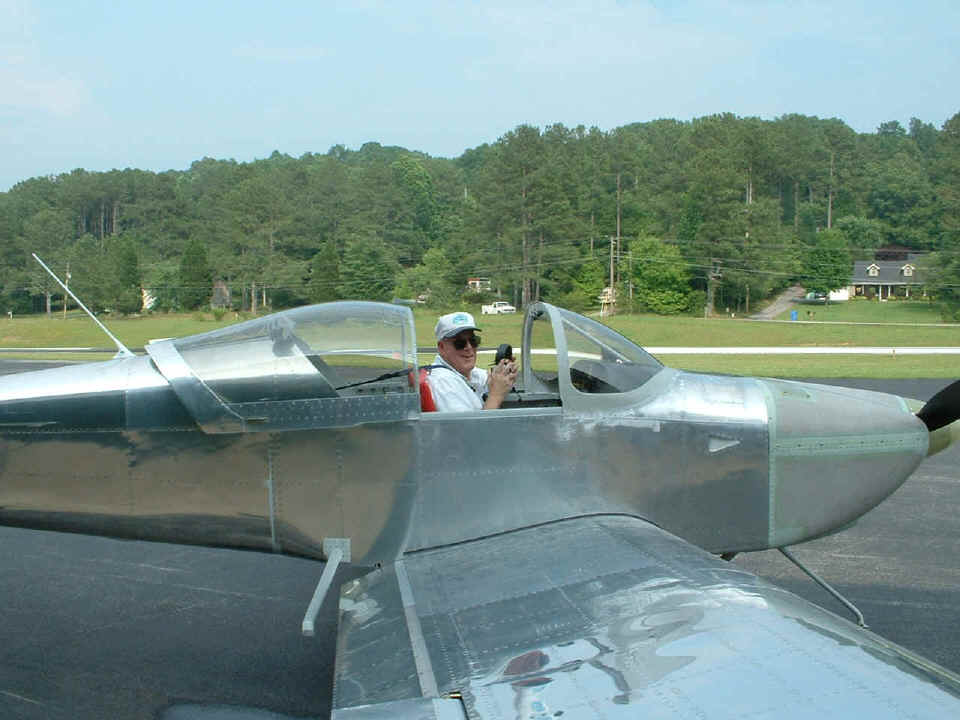 I get congratulations and questions about that flight as the staff of the local flight school and the FBO come out to greet me.  I want to express my sincere thanks and gratitude to Lowell Sterchi for his photograhic efforts today with my digital camera, and to Rich Nadig for being there these past 31 months as this airplane project came together.   And THANK YOU, Mike Seager for being an EXCELLENT flight instructor, and to Georgeanna for her nice "Birthday Surprise" last week when I was in Oregon! 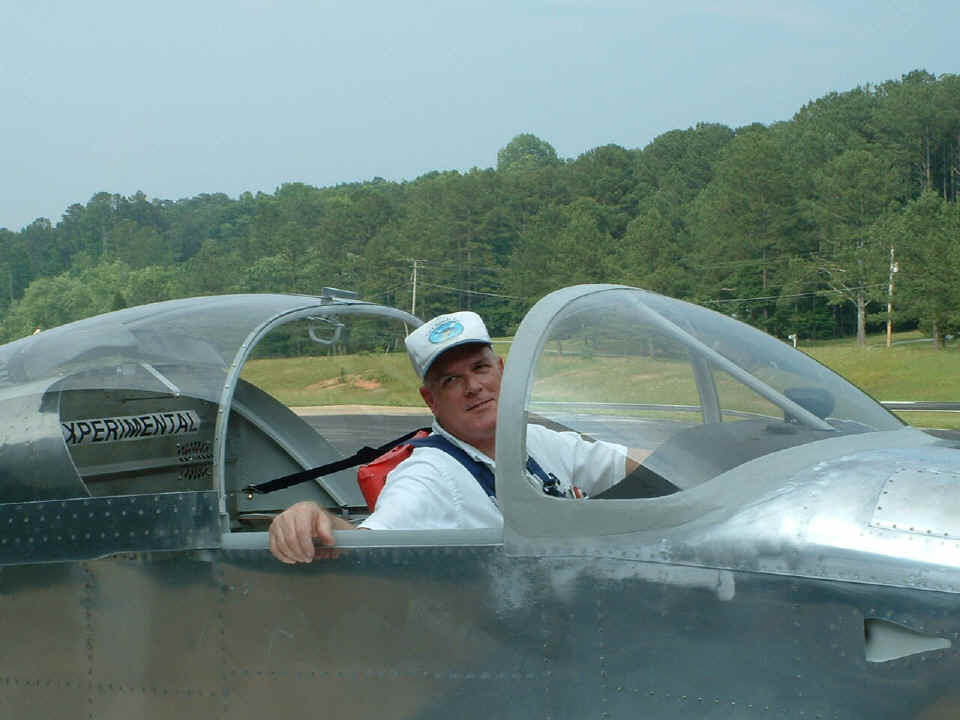 Back in the hangar, there is a very small mount of oil on the underside and the source still eludes me.  I will keep looking after each flight until I find it.   I did manage to get a small turn on one bolt on the prop governor.  That could be where this came from.  Everywhere I touched the engine with a clean paper towel came up "clean".  The oil was pooled in the webbing where the four steel tubes come together to hold the nose gear leg.  I had two visitors also helping me look when I got the cowl off. 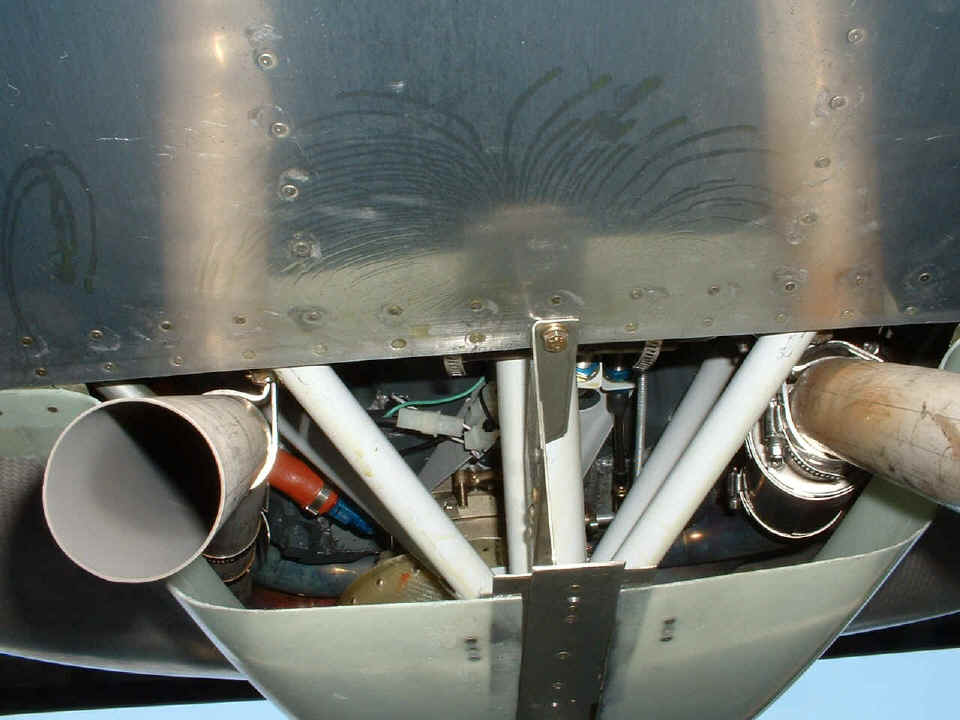 When I got home around 9:15 PM, it felt like someone had let all the air out of me.  It is almost 1 AM as I post this tonight.  I have been awake since before 6 AM.  I am sleeping late in the morning.  See you tomorrow night with new adventures of RV flights and friends.

June 10, 2005:  Today was an ordinary day like so many before the RV project.  I did not go to the Collegedale Airport at all!  I did laundry and went to see another pilot, Wendell Folks.  He has a 2500-foot grass strip behind his house near the Chickamauga Battlefield Park in North Georgia.  He has come to my house and to the airport to see the progress on my RV-9A.  He also observed the airworthiness inspection the other day.  He is still trying to decide which RV model he wants, but he is sure it will be a quick-build.  He wants me to move my RV down to his hangar after the 40-hour test period is completed.  Of course we all know why!  RV builders with completed airplanes are the best source of local information on building an RV.  At least I can help him avoid my mistakes.

All those low-hanging clouds were a good reason to have a hangar-talk session and see his home airport.  This is the view looking North from about the mid-field point of his runway.  He is having some improvements done near the South end. 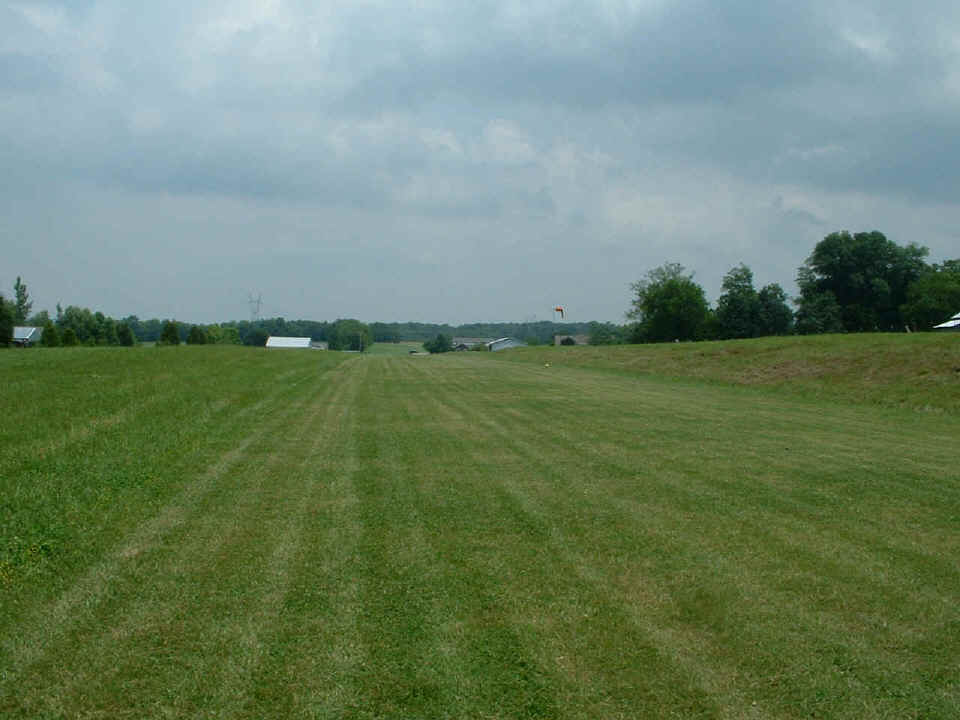 Looking south from the road in front of his home shows a nice departure path since the wind is quite often from the South. 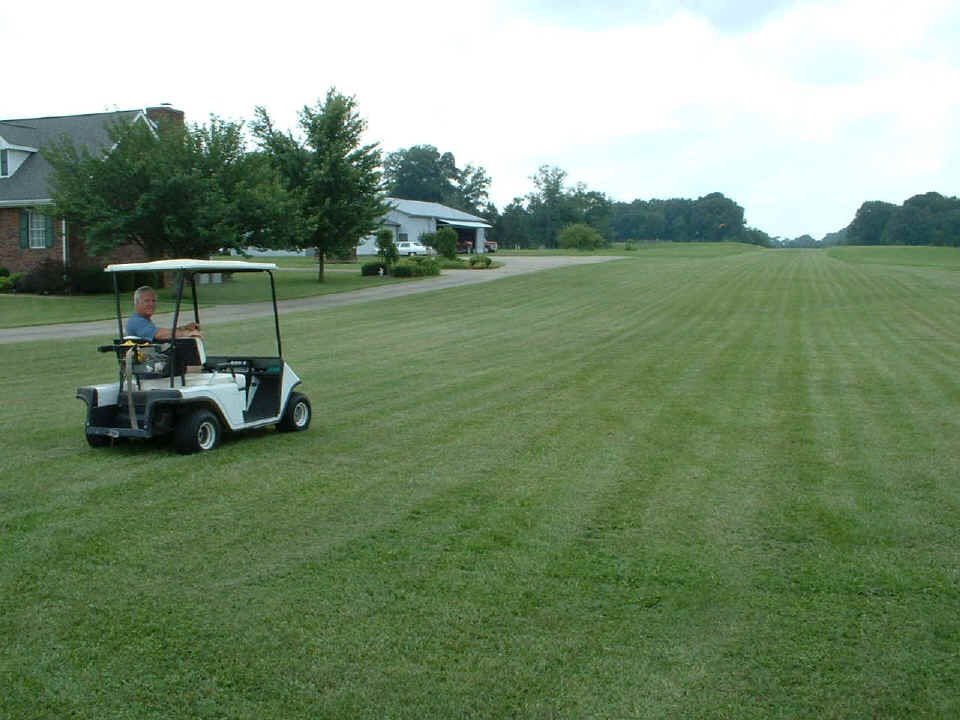 Here is the inside of his hangar with a Cessna 182 in it.  What you don't see is his Aeronca Champ which is out of camera range to the right side of this photo.  What you can see in the background is one half of the OLD fabric that covered the Champ fuselage before he restored it. 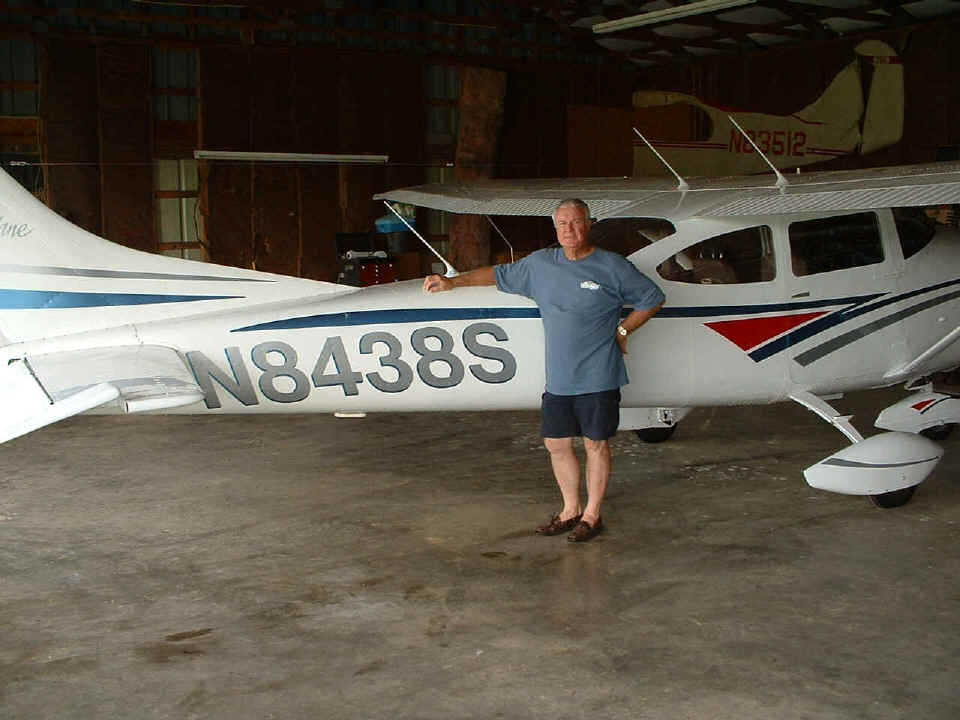 This is the view of the hangar, the work shop where he plans to build an RV, and his home of 20 years.  And of course, what grass-strip pilot does not have a tractor with mower attached. 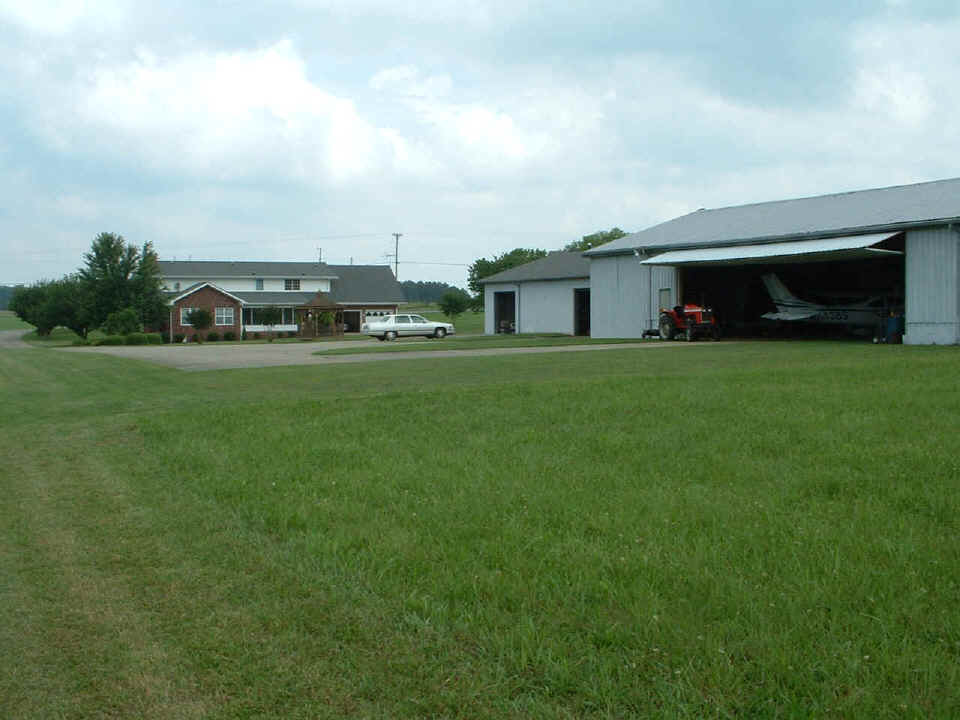 It was a good day to get a taste of the social life that comes after the plane is tested and flying anywhere I want to go.  Although his field is only 10 miles south of the Chattanooga airport, I am not allowed to fly across the state line into Georgia to visit him or Alabama to see my other RV friends until the 40 hours of test time are completed.  The weather is not supposed to be that good this weekend.  I will probably get to catch up on programming of the engine monitor alarms and limits, and brush up on the calibration routines of the EI fuel gauge.  More tomorrow...

June 11, 2005: We had some rain showers moving through the area today.  During the morning I worked at home on the Pilot Operating Handbook for N2PZ.  Fortunately, the format is already established by some of the other RV-9A builders at Van's Air force.  It was pretty easy to edit the POH with my information on weight and balance, plus the carburetor vs. fuel injection, etc.  David Edgemon talked about doing his book to print landscape with two pages side-by-side on letter-sized paper.  I may have to talk him out of his file to see how to format the thing for printing.

I got to the airport around mid-afternoon and spent some quiet time in the cockpit with the battery charger on the airplane while I ran through the software calibration routines for the fuel gauge, then reset some of the limits on the Grand Rapids Technologies engine monitor to minimize the number of "false alarms" from the unit in flight.  After that I cleaned off the oil residue from the bottom of the fuselage in that first 12 inches after the exhaust pipes exit the cowling.  I had spent some time trying to locate the source of the leak before going flying.  Here is what I saw when I crawled under the airplane after flying.  No, this is not a new picture.  It is the same picture that is third from the top of this page.  Your computer only had to download it ONE time, but is displaying it TWICE on this page.

I bought a JVC digital video cassette recorder (camera) last night and got a chance to use it at the airport before heading home tonight ahead of some heavier rain showers.  I put it and my digital still camera in the airplane, along with my red cup of ice water, some fresh grapes, Almond M&M's, etc.  I figured I would fly as long as the weather would let me remain VFR.  I learned to fly in Florida, and today was the day the Florida weather came here.  I felt right at home again.  This time I was not flying a SPAM CAN, but was tooling around in a new airplane.  I was busy watching the cloud patterns and the rain showers and picked my way around them in the area between Chattanooga and Cleveland, Tennessee and south of there to the state line at Tennga, then back over to the Collegedale Airport.  The bottom line:  I did not take any still photos while I was in the airplane for 1.5 hours today.  I talked to Leon Bagby at the Collegedale FBO on the CTAF to know if rain showers were moving in while I was 20 miles away.  He called me once to be sure I was still on frequency.

Here is the lowdown on the flight time.  I took off around 5:30 PM and went around the pattern ONE time only.  On the downwind leg I saw a solid area of rain that looked like it was coming up from the Georgia side of the state line toward the airport.  I landed and put the airplane back at the front of the hangar, then went up to the FBO office to watch TV and check the weather radar on the computer as well as the TV news and the weather channel local radar.  I launched again around 6:25 PM flying northeast to the Cleveland area and called Chattanooga Approach to get a transponder code to check that it is working OK.  I thanked the controller and terminated the service since I was outside his airspace and cannot go there while I am in the testing phase.   The rest of the time I just climbed up to the 6000/7000-foot range of altitude as the overcast cloud layer permitted.  It was smooth there and in places I had a 30 MPH tailwind.  Going round in circles up there made for some interesting speed comparisons between the two airspeed devices and the Garmin GPS which only knows ground speed.  The temperature on the ground was around 77 degrees F, and only 65F at 6000 feet MSL.

I tested the autopilot on heading mode using the internal gyro, and on the GPS tracking mode.  The smart coupler built into the NavAid Devices controller followed the GPS "Direct to" track calculated by the GPS when I asked for 3M3 on the way back to the airport.  It worked just fine.  The VOR receiver section of my Garmin AT SL-30 did not have any signal.  Looks like I will be digging into that mystery in the hangar tomorrow. I cannot practice any ILS or Localizer approaches without it.  I got out my Sporty's walkie-talkie with built in VOR receiver and found the Choo-Choo VOR is up and running.  I can receive it here in my apartment since I live just a few miles from it.

After I landed back at Collegedale, two other pilots came by to get the de-briefing of the flight.  It was the usual good-natured banter and stories of going "round and round" and "up and down" in the open areas between rain showers to remain VFR.  Bill Jennings asked about climb and approach speeds and we compared them to the Swift he flies.  The other younger pilot flies a Citabria and was amazed at how quickly the RV-9A gets in the air on takeoff roll.  When you have a constant-speed prop, you can get the engine up to the 2700 RPM maximum and get all the horsepower you paid for in the takeoff.  I spent most of the flight time running 2300 RPM and 18 to 21 inches of manifold pressure since there was nowhere to go in a hurry, just round and round, up and down.

It's after midnight again and I need to get to bed in case the weather cooperates any tomorrow.  The local weather forecast gave me some hope that the whole day may not be washout.  I will let you know.  Tomorrow is my last chance to fly before I head to Texas for an industry trade show and some job hunting with resumes in hand.