June 8, 2005:  Happy BIRTHDAY!  Today was the birthday of my airplane.  DAR John Burgin arrived as planned and it was not long before the appropriate FAA folks were notified and we got started on a three-hour session that was informative and THOROUGH! This was the only suggested change he offered, although the carb heat cable is built per Van's plans.  Take notice of the safety wire around the carb heat cable on BOTH sides of the Adel clamp.  This prevents any slippage of the cable in the rubber of the clamp in the event any oil residue should get on the clamp.  Another pilot who wants to build an RV was there during this session and related a story of his THROTTLE cable on his Aeronca Champ that slipped through an Adel clamp and caused a power loss.  He went home to put this little tip on his airplane to prevent another occurrence. 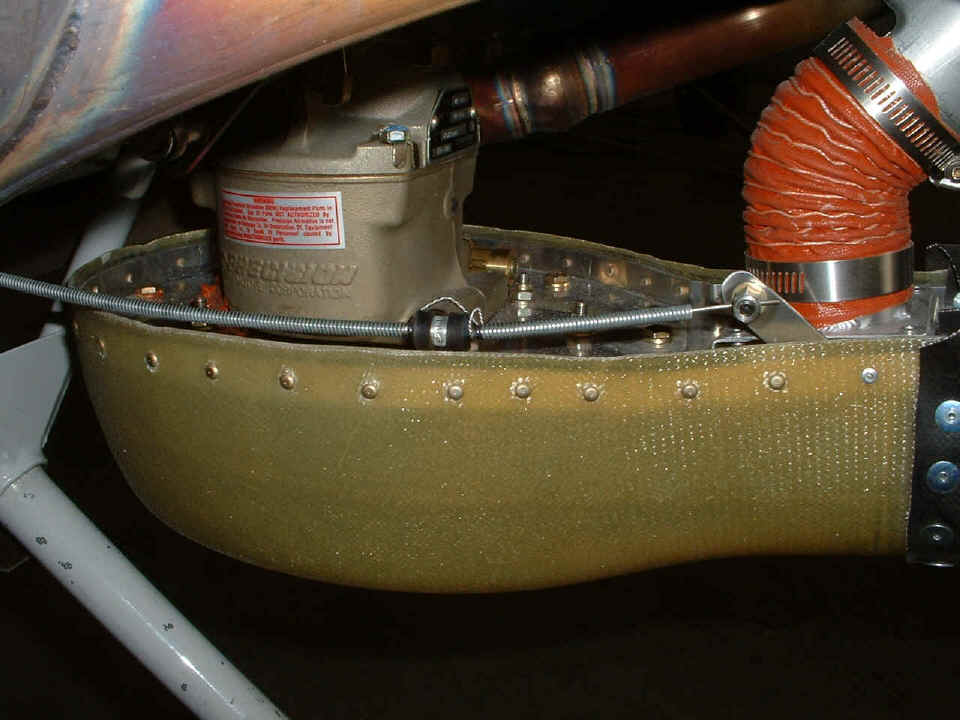 After all the paper work was completed and a test area designated, it comes down to this photo opportunity.  The pink airworthiness document, my aircraft log book with its first entries, and the test area limitations document.  When I put all these along with my registration in the aircraft, it is legal to fly in the test area for the next 40 hours.  After that, it can go anywhere! 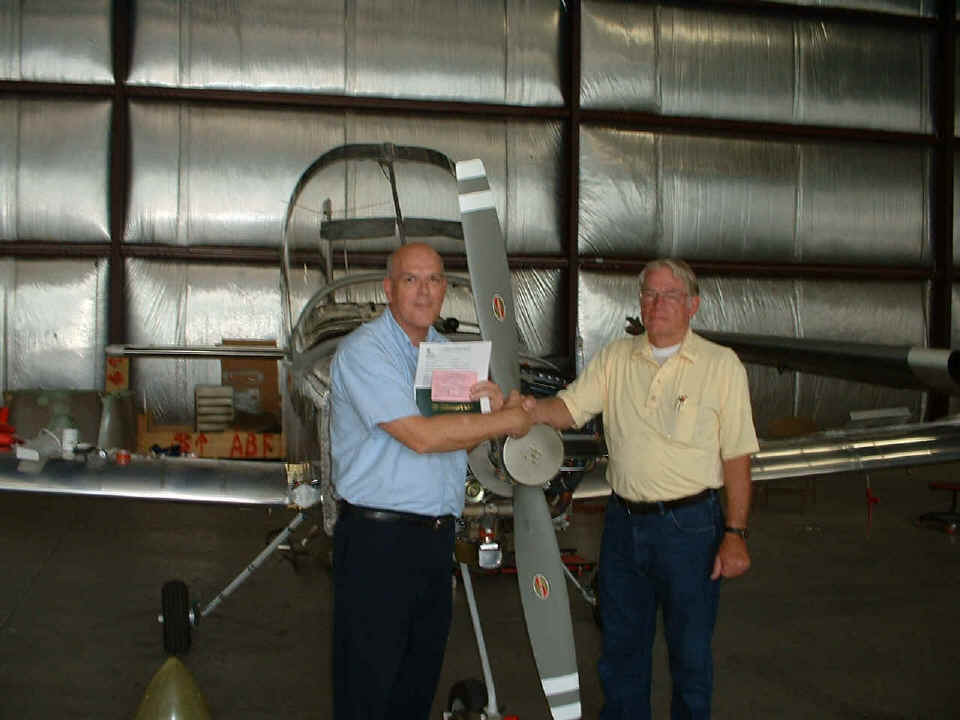 For those of you counting the build hours:  I did not log any construction time for removing all the inspection plates or the cowl.  I did log the time when I started to put things back.  The use of blue thread locking compound on the screws of the aft fairings was a sign to me that some of these parts are going to stay attached for a long time.  At the end of the 3.5 hours after John departed, I had the empennage fairings secured, the two aileron inspection plates secured, and the baggage wall with speakers connected.  The two covers over the flap linkage on each side were also put on for the first time since they were primed "way back when".

I called the folks at NationAir Insurance and my FLIGHT coverage insurance policy will take effect at 12:01 AM on June 9, 2005 (about 15 minutes from now as I publish this).  The flight test limitations are day VFR flights only, remaining outside the Chattanooga and Knoxville Class C airspace, with all of East Tennessee EAST of US 231.  That puts Collegedale at the southeast edge of an area that started out as a 50 nautical mile circle that stretched from the Georgia state line to the Kentucky state line.  The western side of the circle touched on US 231.  Rather than trying to find map coordinates that depicted the center of that circle, the use of that highway and the state line boundaries on my GPS became the description of the test area that will be my free-flight test area for the first 40 hours on the Hobbs meter.

The plan for tomorrow is to get the fuel tanks filled, check for leaks from the tanks, and calibrate them at the same time.  I will put the wing fairings on after the tanks are filled, fly for an hour (weather permitting), then check the engine again for any possible oil leaks since it will be running at full power for most of that hour.  Rich Nadig will be flying chase plane duty in his RV-3.  When that hour is complete, maybe I won't smell too much of that "burned paint" odor.

June 9, 2005:  This day started out with low clouds and haze and the threat of rain showers.  Rich and I got together at the airport early.  We pumped the gallon or so of fuel from the RIGHT tank into a fuel can and towed the airplane to the fuel pumps.  I had picked out a position around the fuel pump that was reasonably level, but we still had to use the ramp boards from the weight and balance kit to get the airplane leveled laterally and longitudinally.  The object here was to get the airplane sitting in "cruise" attitude to calibrate the electronic fuel gauge.  It did not take long for me to screw that up and get the gauge out of CAL mode on the second data point with just THREE gallons in the LEFT tank.  After that, I decided to put 10 gallons in each tank and just head back to the hangar to finish putting on the wing root fairings.   Rich wanted them off until we put some fuel in the tanks to see if any leaks would appear.  When I am involved in these activities, I usually forget to take any pictures.

After I got the fairings in place, I put in all the covers I could at this time.  The fuel and brake lines on both sides in front of the wing spar are now covered.  The center cover is not yet in place.  I also started on the conversion of the passenger seat back to a cargo shelf.  Here is the first fit of the shelf with the hinges clecoed to the seat and the seat pan over the wing spar. 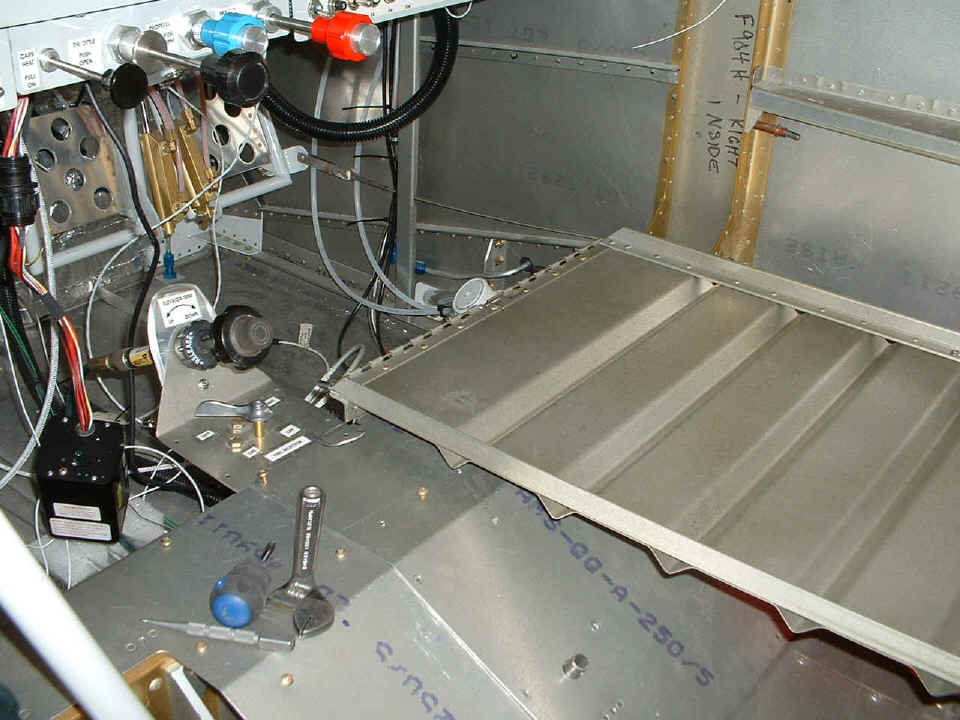 Since the visibility and the chances of rain were the big factor, I continued to put in work on this project in the hangar.  Here is the hinge that will be riveted to the seat pan. 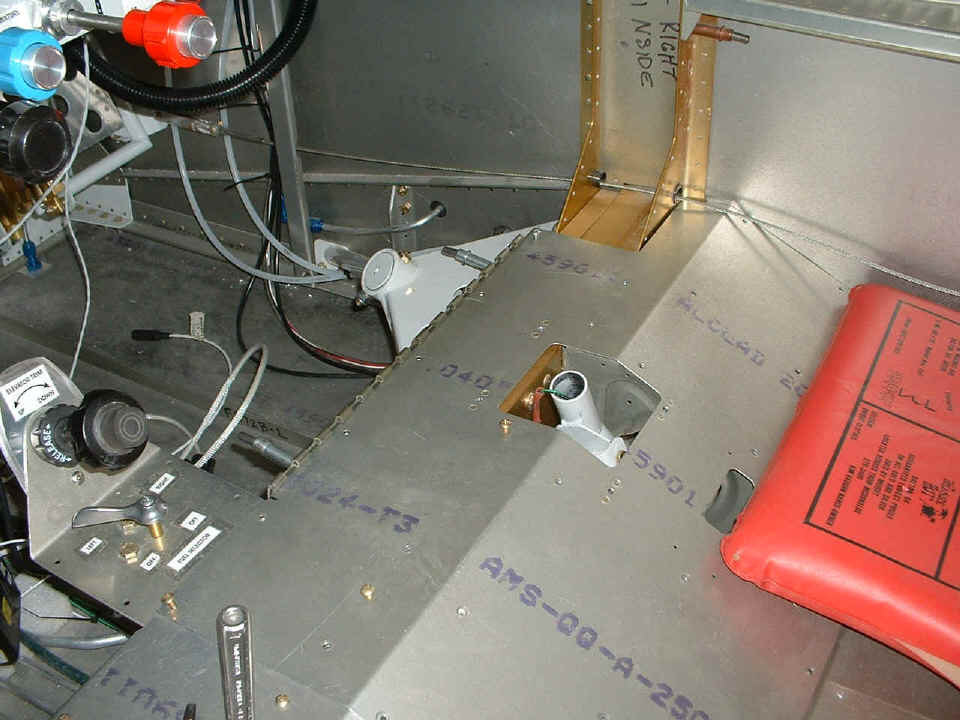 This is the underside of the seat pan showing the countersunk rivet holes that match the holes in the hinge. 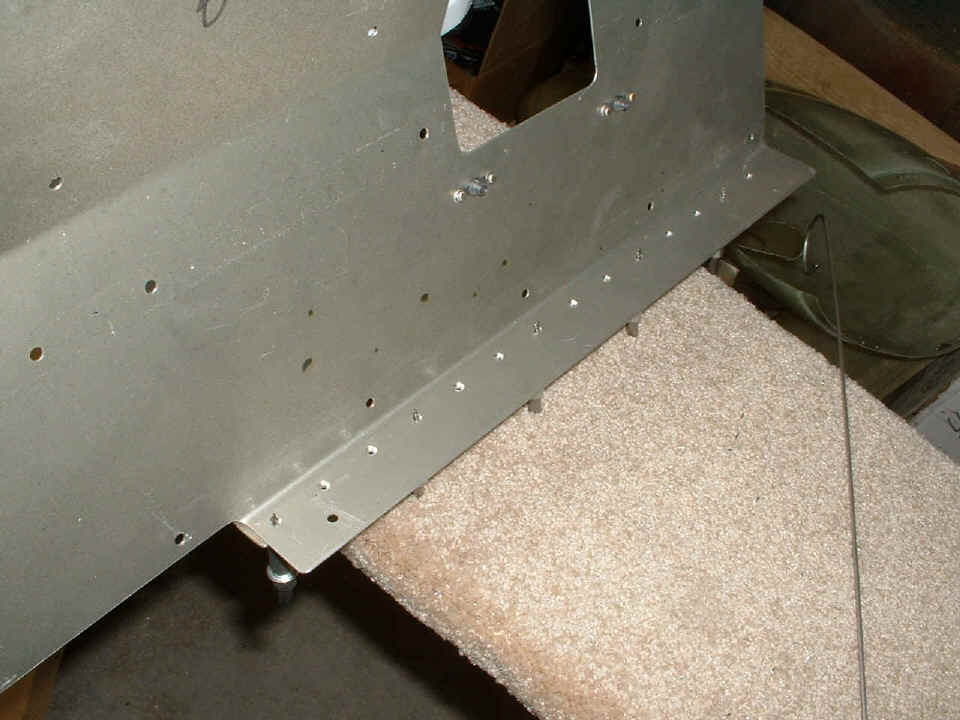 Next is a shot showing the orientation of the hinge to push the seat as far AFT as possible to make one of the corrugations of the seat back to clear the wing side wall bulkhead. 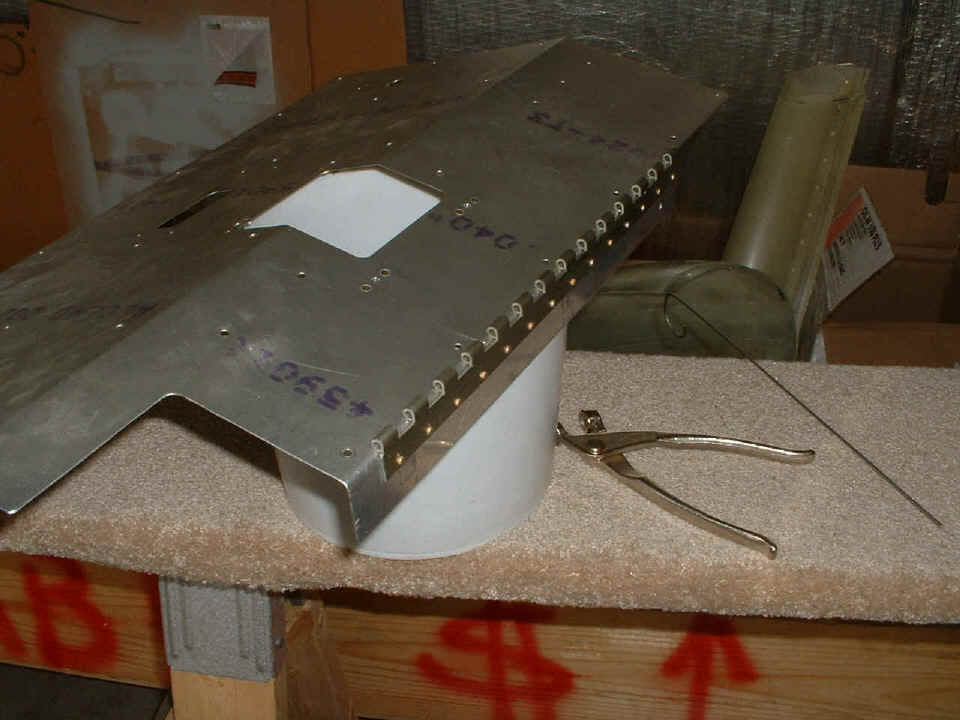 Here are the two pieces held together with a rod to show the way they will be positioned in the airplane. 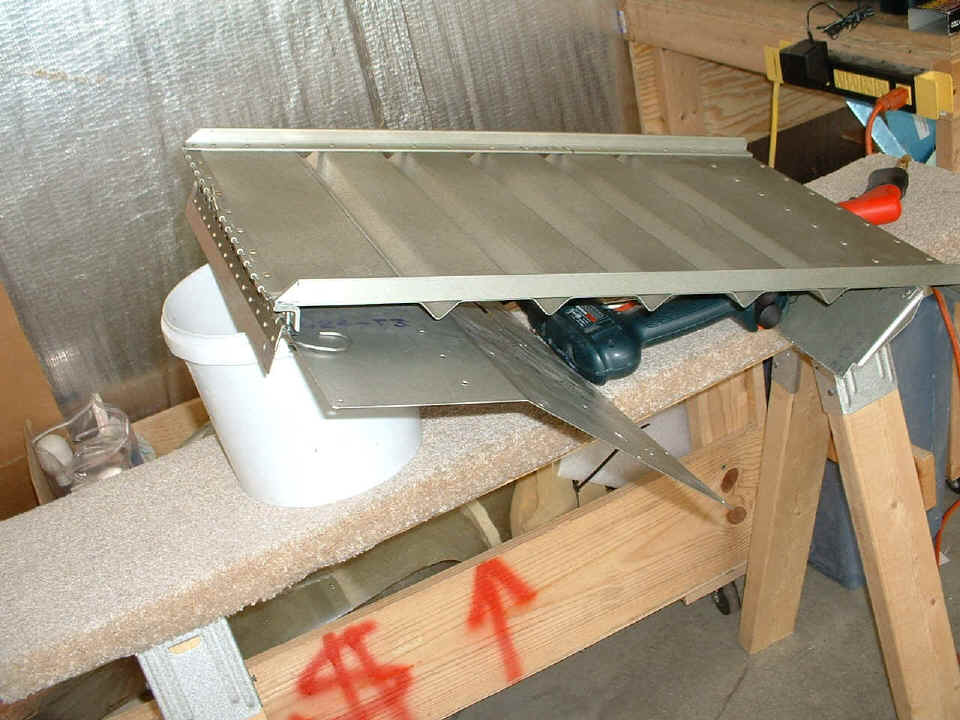 I put in 5.2 hours during the day to get the airplane ready to fly.  Most of that was putting the covers in place and putting the hinge on the right seat for the "baggage shelf" modification.  It still needs more work before it will be ready to go to work holding up my 42-pound tool box.  I realized that when I fly alone, I need to put heavy items in the seating area to avoid an unsafe AFT CG loading.  With TWO heavy guys (260 pounds each) in the seats, N2PZ can handle full fuel and 114 pounds of baggage to tip the scales at 2000 pounds.  With this load, the CG is 84% of the range.  At minimum VFR fuel reserves of four gallons, the CG goes to 94% of range.  I have had an airline pilot, an A&P, and the DAR look at my weight and balance numbers and they all agree that it will fly safely.  Doing all this W&B work has convinced me that it is possible to load the airplane out of balance at lower loads.  I can see that I will do W&B calculations on most flights where there is a question of flight stability. 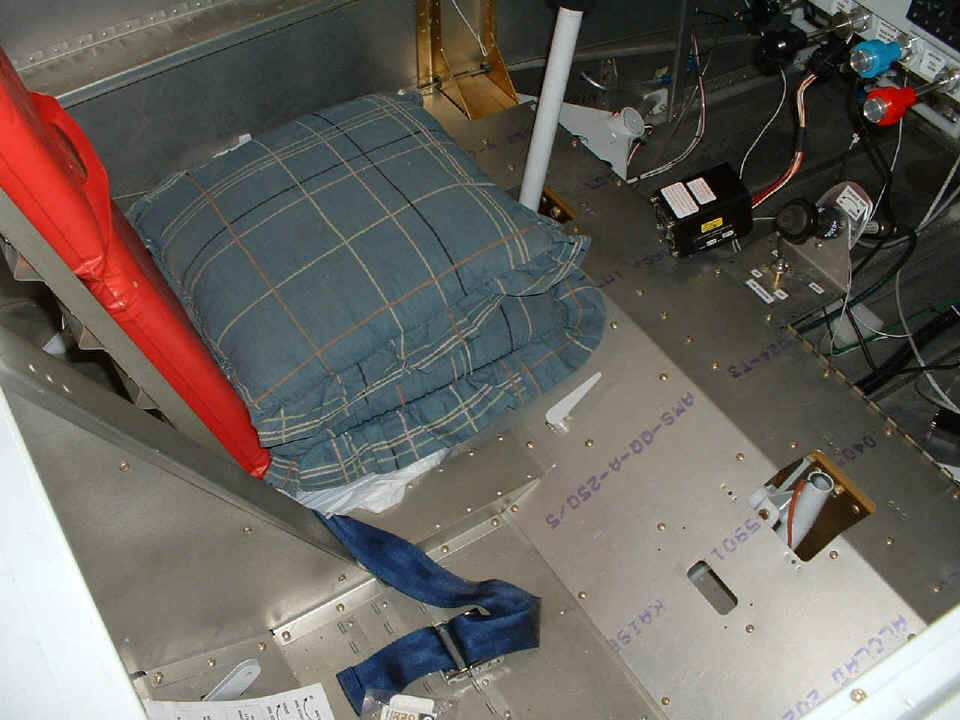 The weather came up to Florida summer standards about the time that Rich Nadig called me from off airport to ask if I wanted to get the first flight in the books today.  Of course, I said yes!  I headed up to the FBO office to relax in the air conditioning, get my water refilled, and eat a chocolate bar to get my blood sugar up.  Aerobatic pilot Lowell Sterchi was sitting there and told us just how important it is to have elevated blood sugar levels to avoid problems with disorientation and "low energy" lethargic feelings when flying.

We watched the weather channel for local radar coverage of the showers that moved through the area, and when it looked good enough outside, Rich pulled out his RV-3 and took off to check things out up to 3000 feet East of the Collegedale Airport.  I got N2PZ out of the hangar and stopped in front of the FBO office to give my digital camera to Lowell to take the pictures you will see on the next page.