May 5, 2005:  The wing root rib photo shows a number of things.  The bottom of the wing is at the top of the photo.  The strobe light wiring at the top of this photo is running through one conduit by itself with no other wires to minimize the possibility of induced radio noise into the low-voltage wiring.  I put in one of the plastic tubes to the stall warning device with the low-voltage wires running to the landing light and the wing-tip marker light.  The other plastic tube runs through the pitot tube holes in the ribs and the plastic bushings all the way out to the last inspection port where the aileron bellcrank is located.   That puts the device outside the propeller arc for a clean air flow. 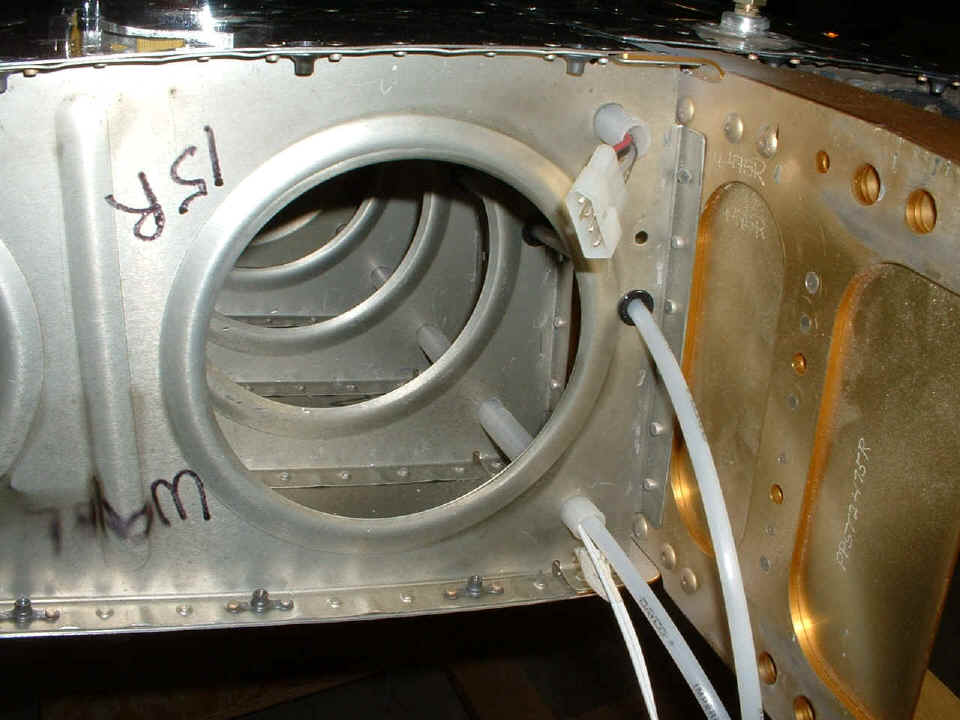 Remember this is the bottom side of the wing turned up on the work table.   I have both tubes just stuck in the air fittings to show how the stall warning probe is mounted on the inspection plate.  I will  be adjusting the angle of the probe during flight testing to be sure the panel-mounted gauge shows the needle at the red/white arc conjunction when the airplane is at stall speed.  The initial testing angle of the probe will be set at 50 degrees. 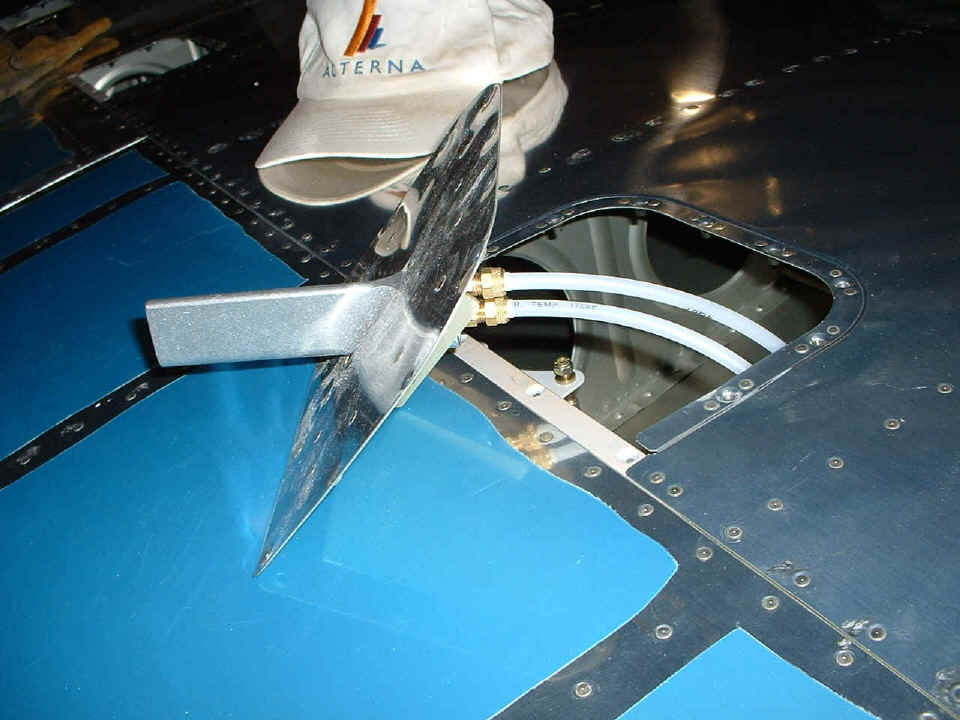 The two tubes from the probe will enter the fuselage through the new plastic bushings I have installed near the low-voltage wires for the wing lights.  The gray cable is the high-voltage wire for the wing strobe light.  Four of the dimpled screw holes in the fuselage center bottom skin are visible at the bottom of the photo below.   Number eight screws will go through these holes into the platenuts seen in the wing root rib shown two photos above. 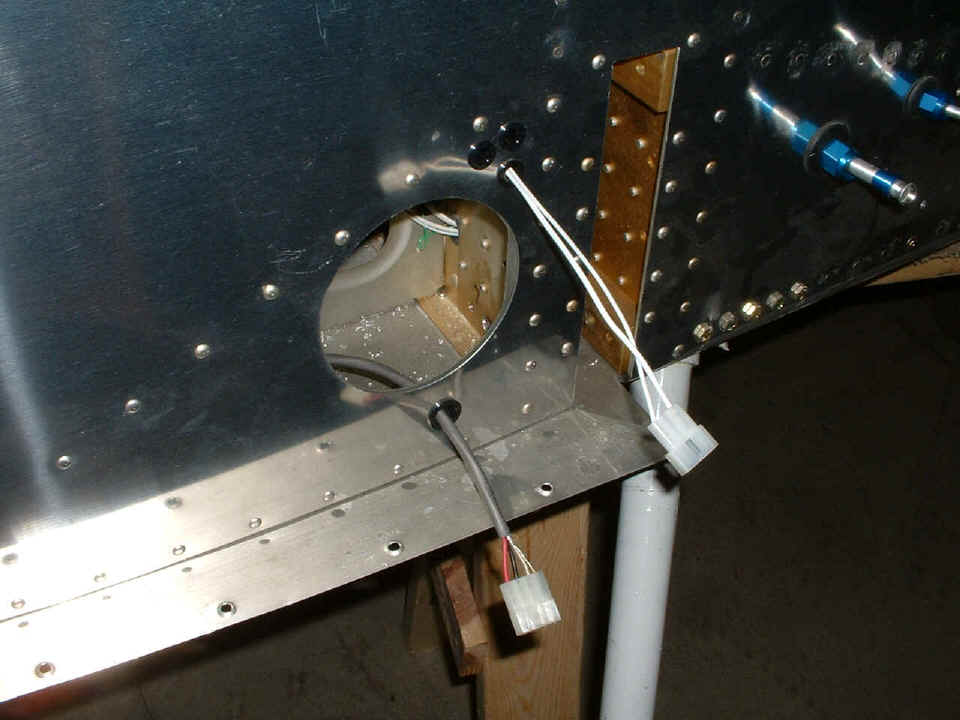 Since I missed the photo last night of the finished fiberglass cap at the top of the vertical stabilizer, I thought I would do it justice tonight and show the colors at the same time.  The cap is secured with three 6-32 flat-head screws on each side.   The fourth screw up there is holding an aluminum filler plate that minimizes air flow trying to get in around the "hockey puck" that holds the VOR/Glide Slope dipole antenna in position. 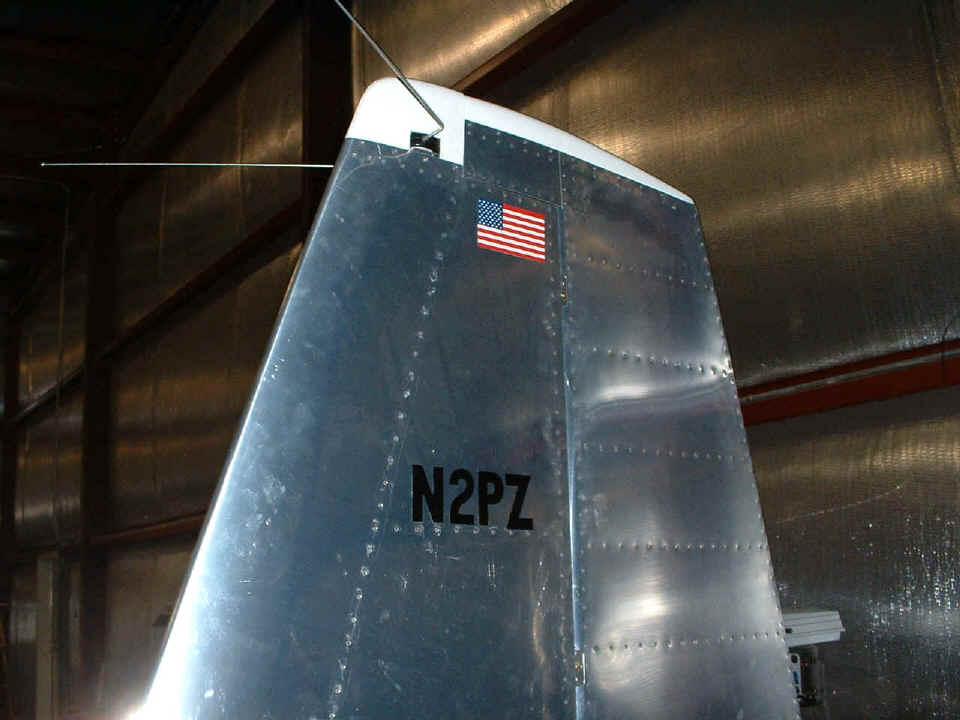 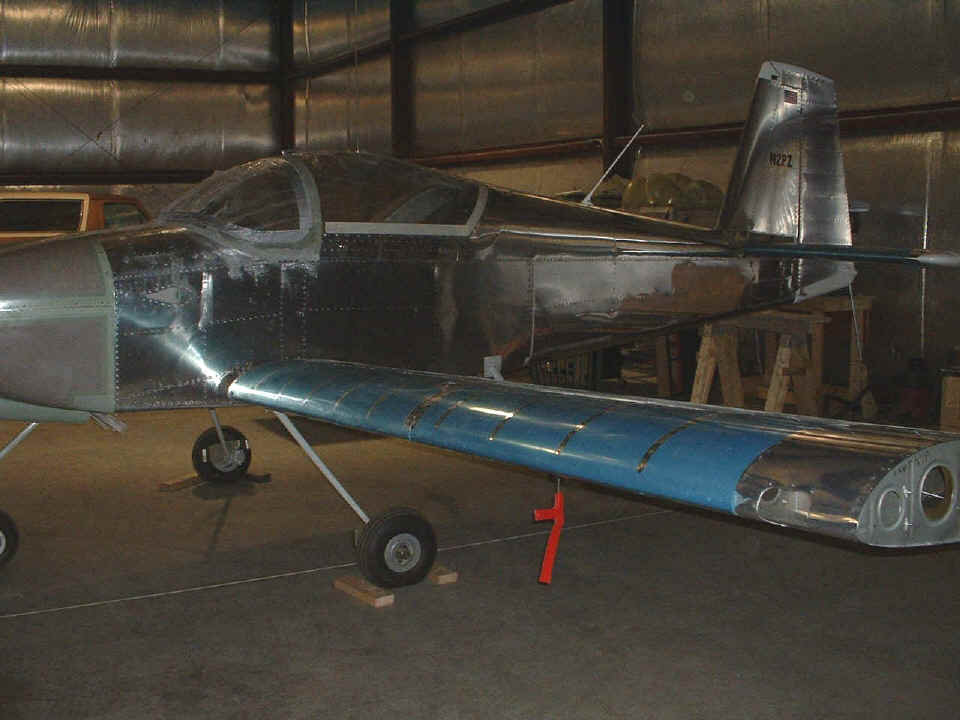 It was 10 PM when I stopped work on the airplane after a 4.5-hour session.   I made it home around 10:30 PM.  Midnight is fast approaching, so that is a wrap for tonight.  It may be Saturday before I get back to the airport, but it will be a good day with our local EAA Chapter 150 meeting and outdoor barbecue in the afternoon.  The forecast is for a sunny day and 80 degrees.  I should have the RIGHT wing mounted before the meeting begins.   I will take some pictures at the barbecue and post them here as well.

May 7, 2005:  Saturday at the airport all day and into the night.  I worked two sessions in the hangar today and tonight after the EAA Chapter 150 barbecue "meeting".  Here are the three pictures about the airplane work.  I will put a link to the EAA pictures at the bottom of this page.  Near the top of this page you saw the preparations of the right wing on Thursday night.  This morning was the time to put the wing into the fuselage.   That started with the two new stall warning air lines going into the fuselage as I lined up the wing on the work table. 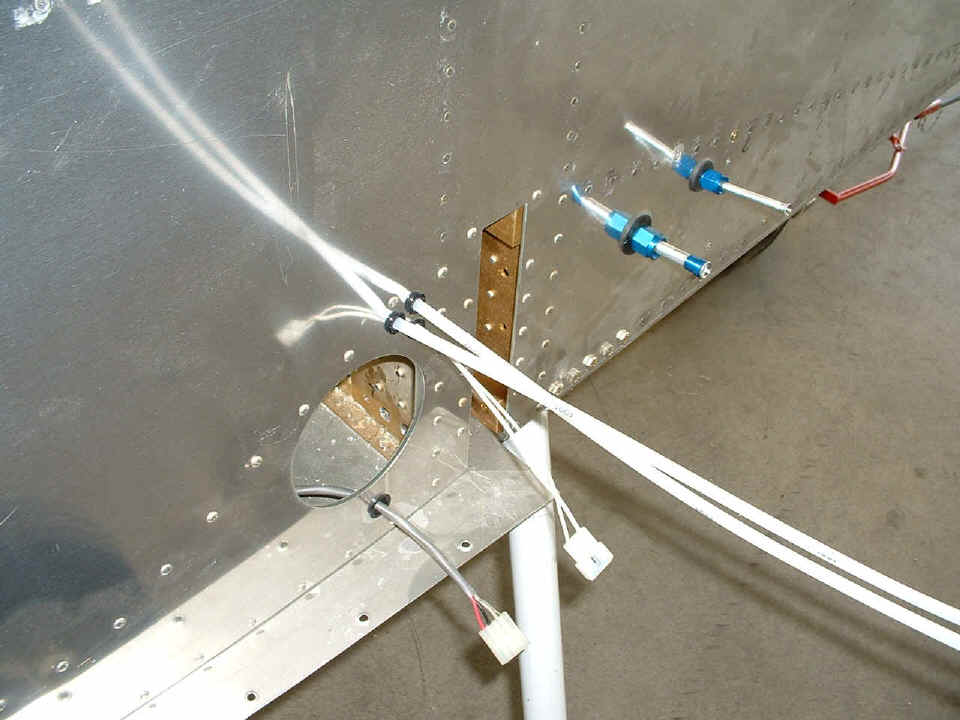 Here is the view from the front before putting the wing in position.  I was actually able to push the wing in between the wing bulkheads and insert the ACE bolts, then the close-tolerance bolts without jacking up the airplane off the RIGHT wheel.   I wanted to try it, and it worked.  Since we have seen bolts down in the spar area, I decided not to post a photo about that again. 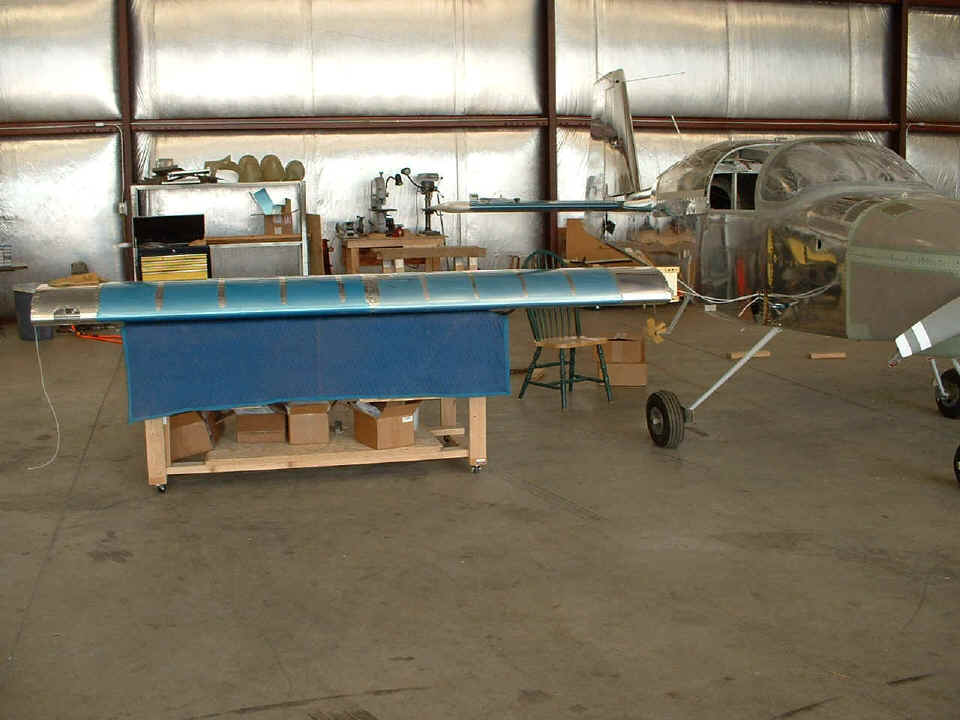 Here is something that is new, but did not get completed before the day ran out on me.  There is my wing incidence jig clamped directly above the rear spar of the wing.  What you don't see in this photo is the other short level I have up on the canopy slide rail above the longeron to verify the airplane is level from nose to tail.   This long level is sitting on the main wing spar and the wing incidence jig and is showing everything is fine.  I realized I had not trimmed off a small amount of the tab sticking out from the seat back bulkhead.  I used my Dremel tool to make the adjustment to the end of the tab.  I did not drill the hole yet, since I also have to confirm the wing sweep is 90-degrees to the fuselage center line.  Although the flaps are just hanging down from their bolts, I did put on the hex rod links and opened up the holes in the bottom corner of the fuselage to allow the flaps full clearance in the UP POSITION.  Look in the photo below and you will see the cutout after it was created using my large Unibit, then finished off with the Dremel sanding drum.  If you don't see it now, I should have a picture posted tomorrow night with the linkage connected to mark the exact location for you. 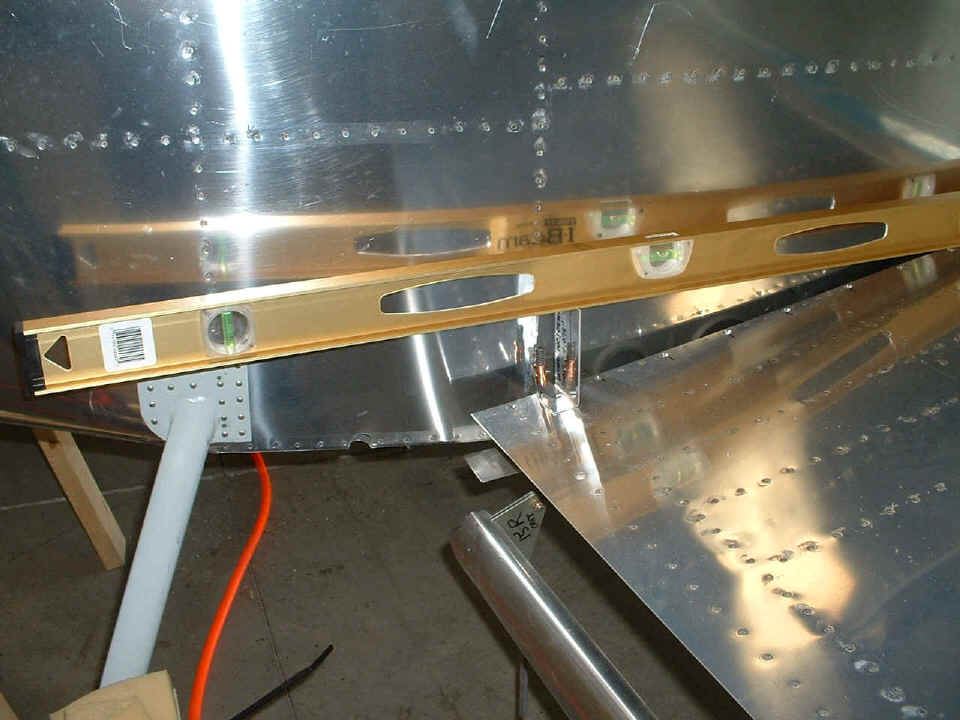 The other things not photographed today or tonight:  I repaired the "hangar rash" done to the flaps during the move to the airport.  I cleaned up the strings on the floor put there to check the wing sweep.  I pumped up the nose wheel tire and moved the airplane back to its storage location for the night, just in case anyone comes to the airport before I get there on Sunday morning.

Here is the link I promised to the EAA 150 barbecue held today.  (Edited June 12, 2010) I received an email today from the current EAA 150 Chapter President to remove the index page for the chapter from my server as they will be putting up their own web site soon.  I have retained the web page about the barbecue when I was assembling my airplane at the airport in May 2005.