April 18, 2005:  This is the view looking down at the alignment of the main wheel fairing with the lines on the garage floor that are parallel to the center line beneath the fuselage.  I have already drilled the holes to keep the wheel pants aligned. 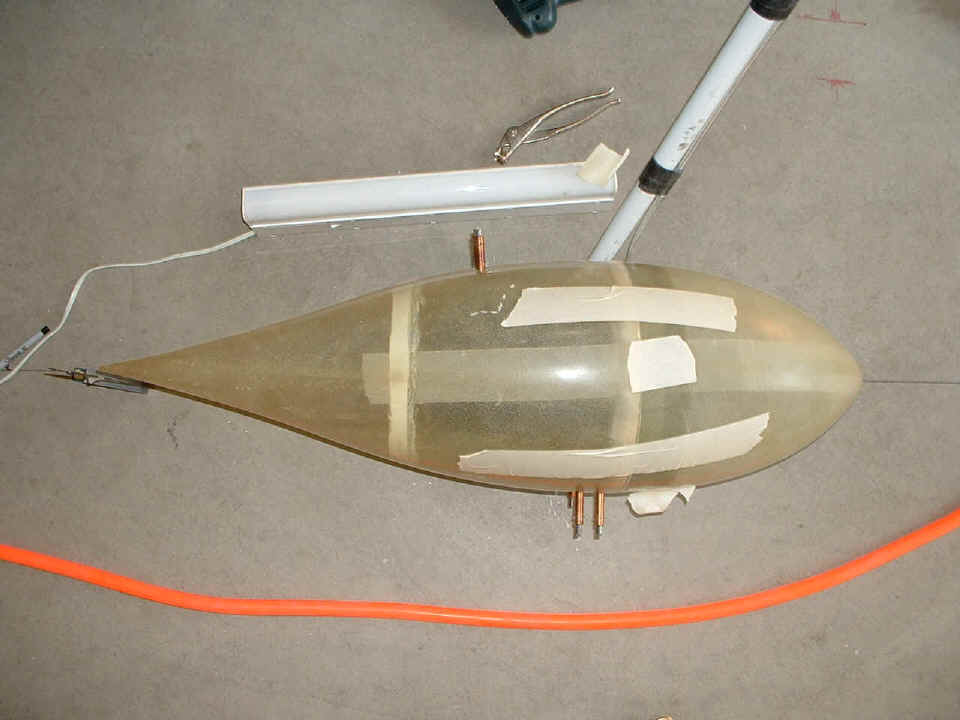 I put both parts of the wheel fairing on the work table to drill the screw holes that will secure the front section to the rear section.  This is the way it was left when I brought the wing cart back inside the garage and stopped work for dinner this evening.  I get to finish this tomorrow, then start the LEFT main wheel fairing. 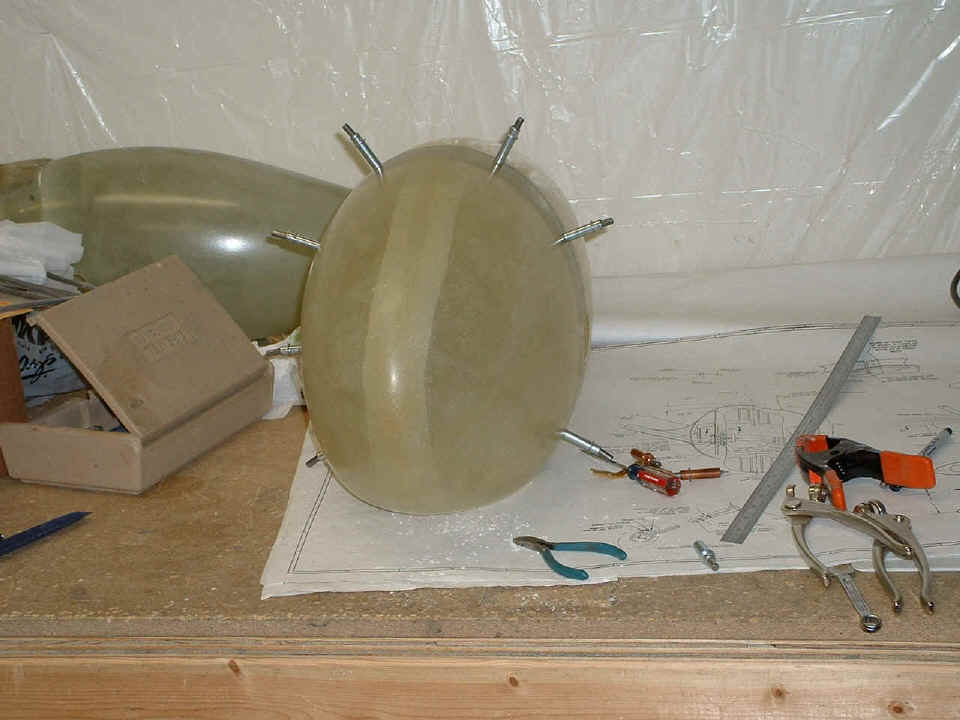 April 19, 2005:  It was same song, second verse.  The LEFT main landing gear fairing went more quickly than the first one.  I ran out of #6 platenuts and will order more from Spruce in the morning for a delivery on Thursday.  For now, I have both fairings drilled to fit on the gear assembly. 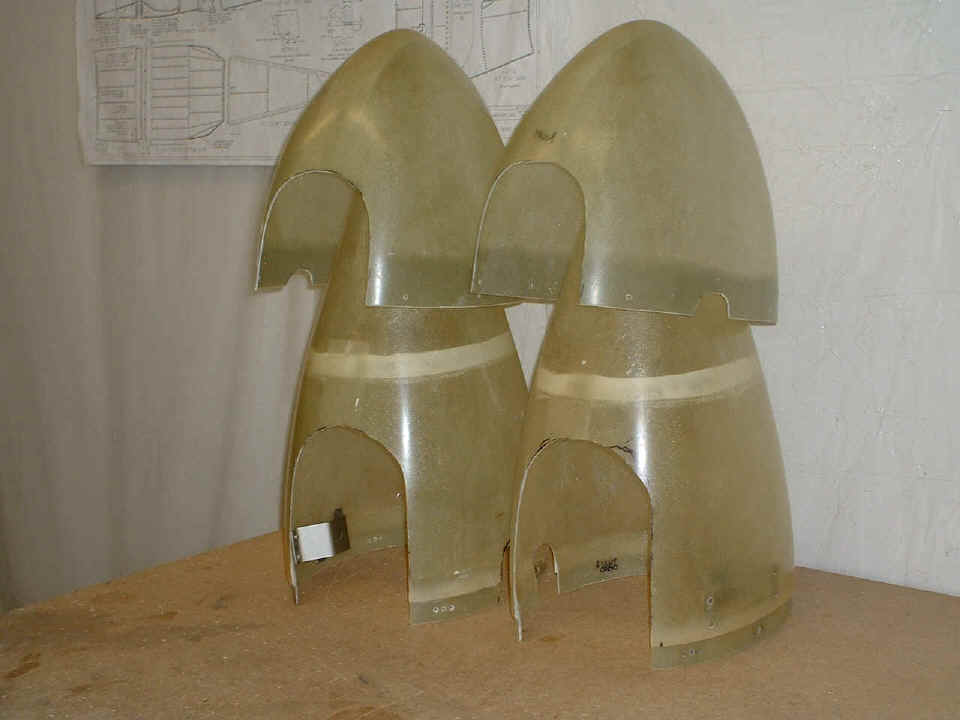 I secured both fuel tanks to the wings with the internal bolts.  I got the left wing up on the work table to finish putting screws in the skin of the fuel tank.   I put in the ones I could reach on the right wing with it still sitting in the wing cart.  I need to roll the cart part way out the garage door to get access to the other side of the right wing for those screws.  I will have to get the wing out of the cart to put in the last three bolts on the wing tank securing it to the wing spar. 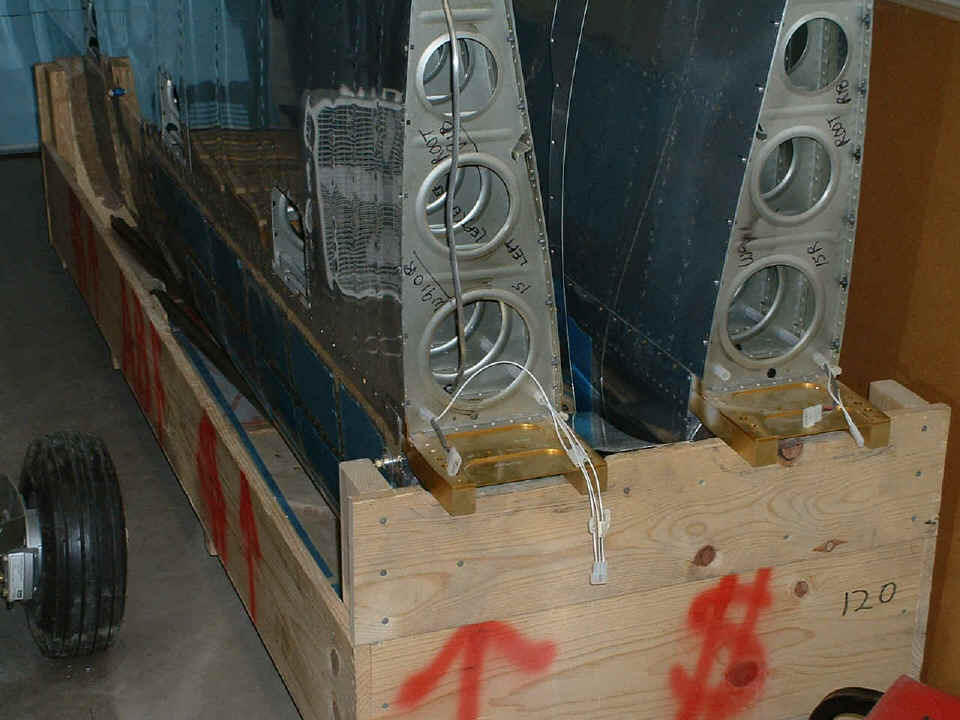 I got started with a project to better secure the oil cooler against possible vibrational damage.  I have finished with the upper bolt and cut the spacer shorter by the thickness of the two stainless steel fender washers between the two flanges.   A third fender washer is under the bolt head.  All three have been trimmed down on one side with the bench grinder to clear the oil cooler body and fins.  The spacer and washer on the bottom are the way Van's designed it to be secured.  I will get the spacer shortened and the new fender washers on that bolt and one on the other side in the next work session tomorrow.  There is a fourth very short bolt that goes through only one flange on the other side.  It will get a big fender washer. 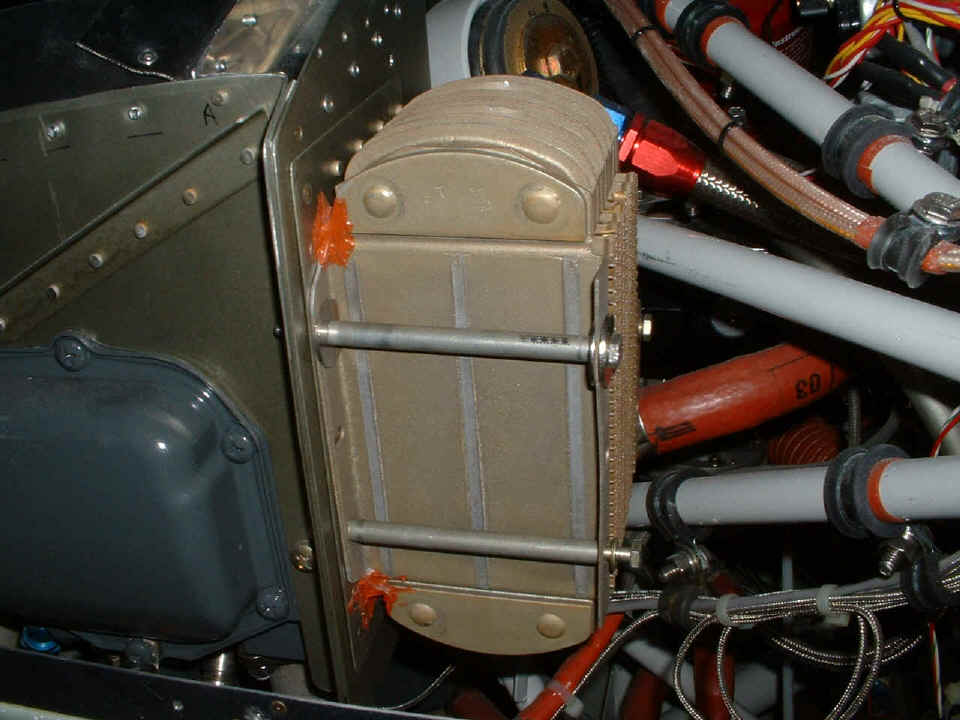 April 20, 2005:  It was a good morning to order the parts I needed from Aircraft Spruce & Specialty.  I also called Sporty's Pilot Shop and ordered a Garmin GPS 296 and a data power cable for it to go into the panel of the airplane.  Then I got to work finishing off the change out of the spacers and inclusion of the fender washers on the oil cooler.  I also secured the remaining screws on the right fuel tank. 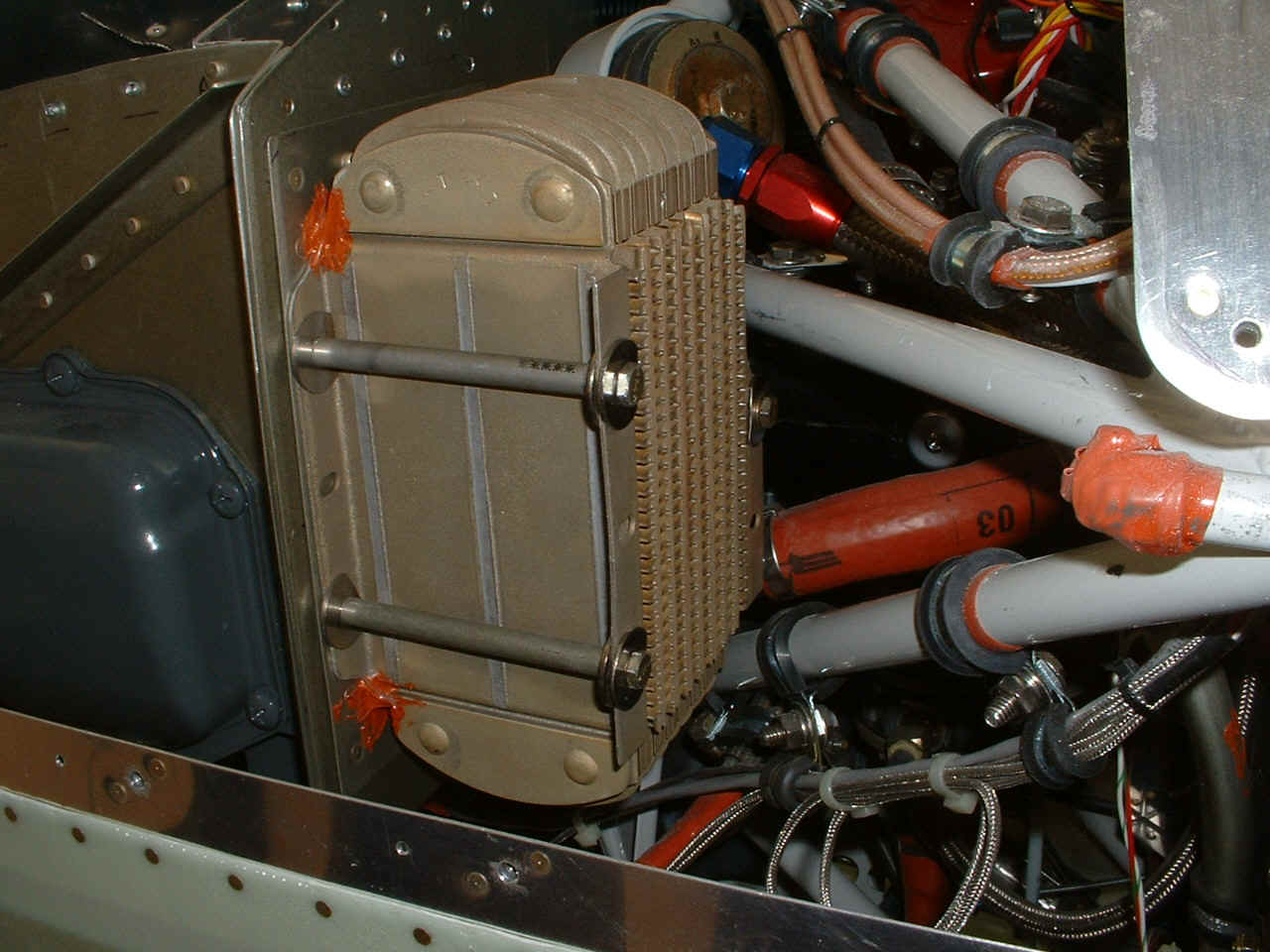 After that, I mixed up some epoxy and reinforced the screw hole area of both main wheel fairings with a few layers of fiberglass cloth.  They're a bit hard to see here, but the two screw holes are hiding under the darker area of fresh epoxy and layers of glass at the center of this photo.  I will drill the holes out again when the resin is completely cured.  If you noticed there are empty holes for platenuts at the bottom corners of the picture below.  The order from Spruce included extra platenuts, along with a windshield care kit, and a long-lasting passive carbon monoxide detector. 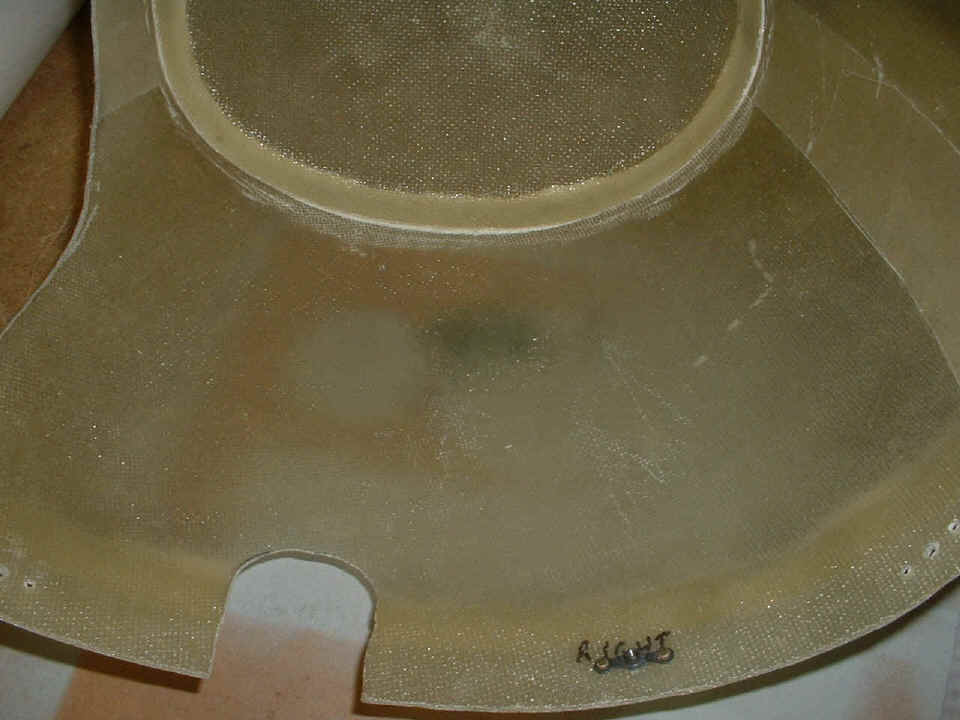 There was plenty of epoxy to fill in the holes for the platenuts I have removed from the front corners of the lower cowl.  As with all the surfaces that are on the outside, I have put dacron peel ply on the fresh epoxy. 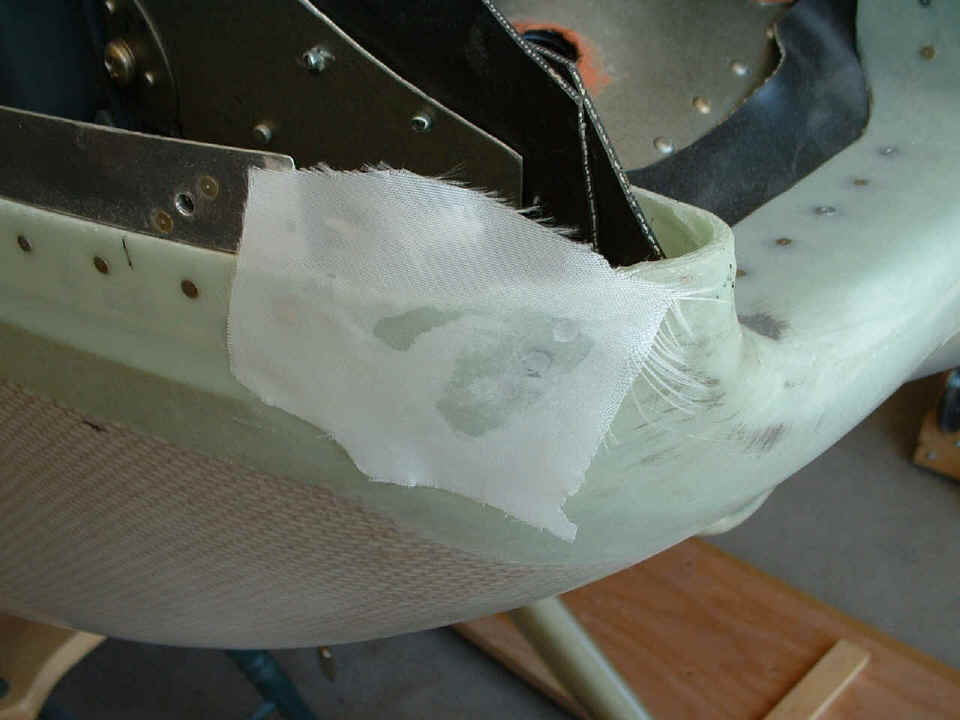 Two layers of fiberglass cloth are on the inside of the cowl at those old corner platenut positions.  The glass cloth extends a bit above the old notch where the original hinge pin exited the cowl side hinge at the front of the cowl.  I will be filling this area with the epoxy filler which I will be mixing up to apply to the windshield fiberglass transition area. 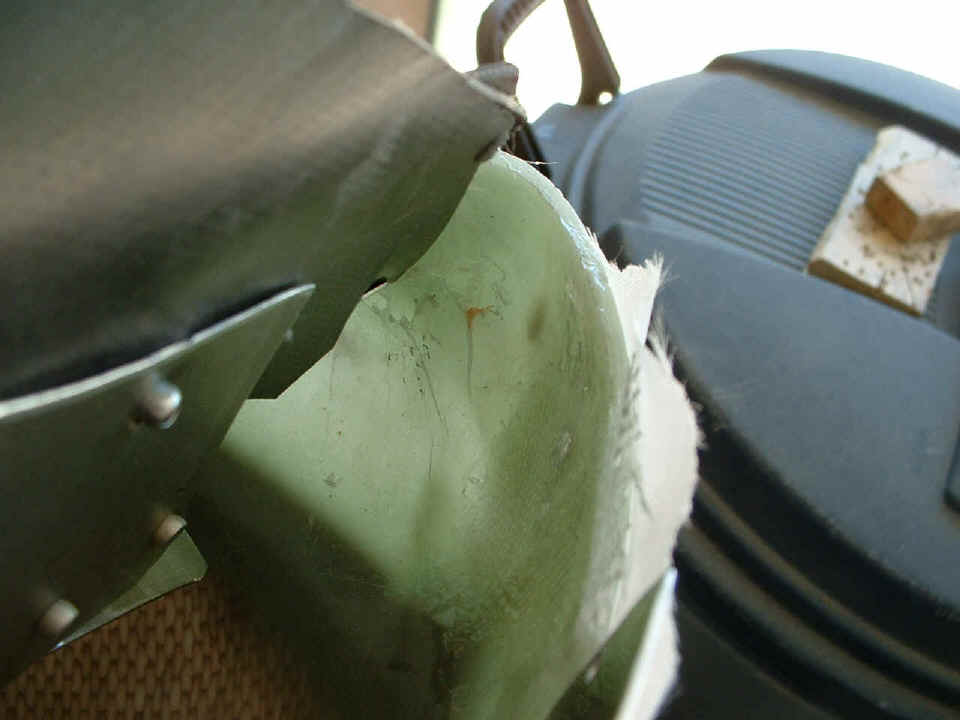 Although there is no photo, I put a second layer of fiberglass cloth on the inside of the bottom rudder cap where a crack was previously repaired.  All this took place in a 2.2-hour work session before lunch today.  Lunch is over, now back to work.  The next session will bring a new page.