March 18, 2005:  I took Friday off and put in 4.8 hours today (Saturday) in two working sessions.  I had to buy some additional brushes to spread epoxy resin for more fiberglass installation.  Before I went out to get those brushes, I put the two pieces of the nose wheel fairing together after sanding the aft edge of the nose piece to better fit with the larger AFT piece.  I also positioned the extra piece I got from Fairings-Etc. to the nose piece after doing some final trimming of it while everything was still on the nose wheel yoke.  As I was removing it, I noticed which screws were deflecting the fiberglass shape of the large wheel fairing excessively while it is attached to the nose wheel yoke. 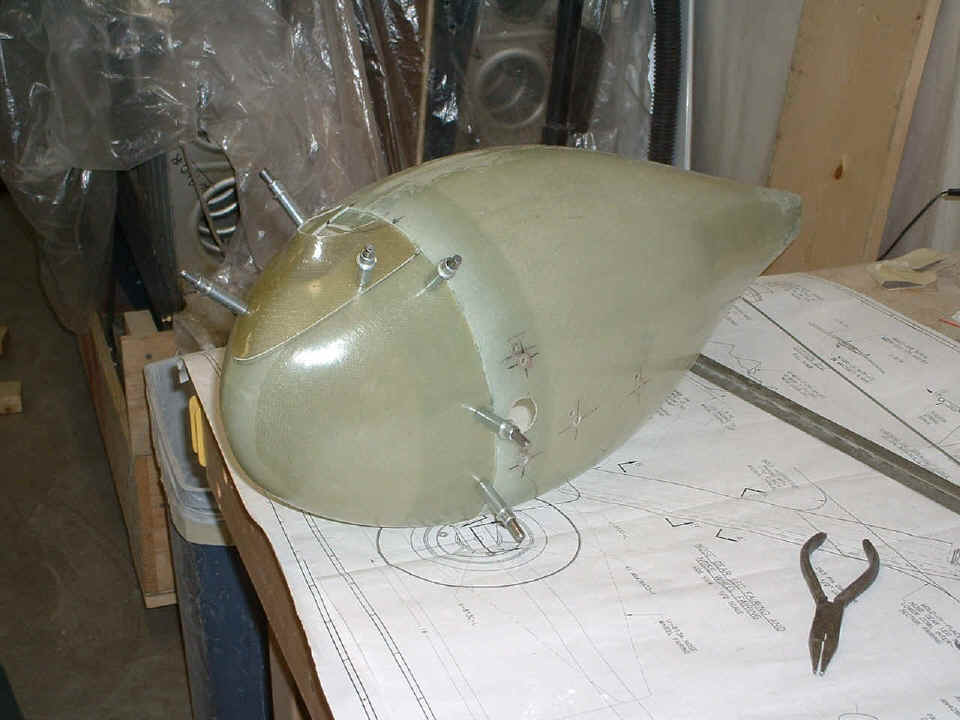 Here are the same two pieces after doing my fiberglass work.  I reinforced the areas where I drilled the screw holes to attach the wheel fairing to the yoke assembly.  I put vinyl tape on the outside surface, then filled the holes with epoxy and put three layers on the holes on the LEFT side of the fairing.  This also allowed me to fill the first set of holes that were drilled in the wrong position.  The right side holes got at least six layers of glass on the inside to minimize the shape deformation when I drill the holes again and install it back on the nose wheel yoke.   I also used some glass layers on the top side of the nose piece and some Dacron Peel Ply to smooth the joints.  You can see the six platenuts are now installed on the wheel fairing to secure the nose piece to the wheel fairing. 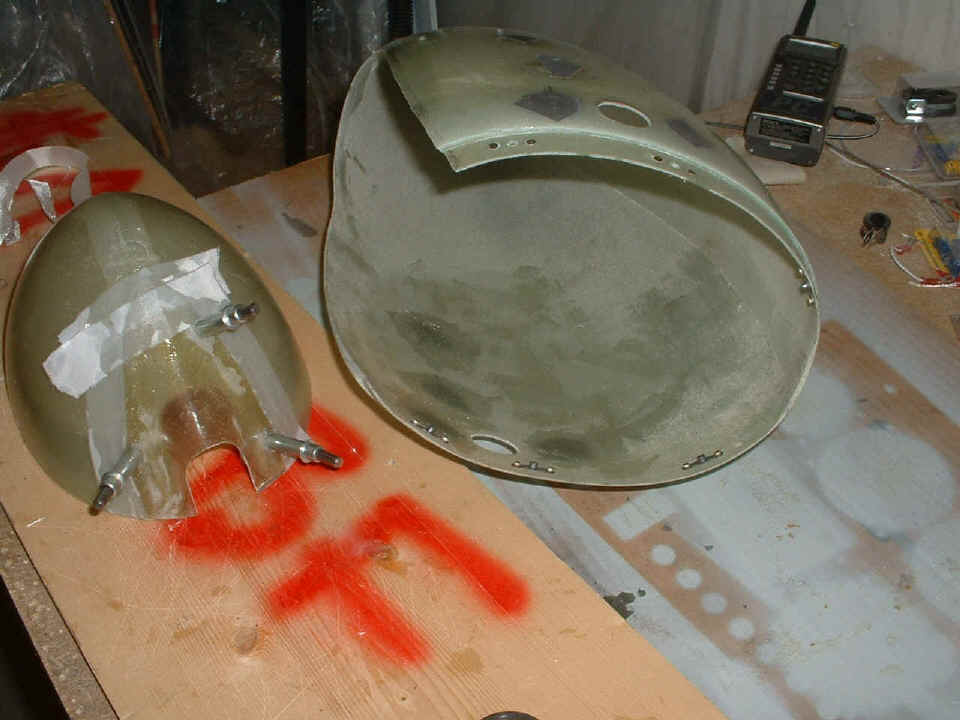 I riveted the four platenuts on the bottom of the lower cowl where the intersection fairing is secured around the nose gear leg.  It was then that I discovered just how dull my countersink was becoming as a result of the glass work with it.  I knew it would become dull from the instructions in Van's manual.  The result, I pushed too hard with it on one of the four rivet holes and all of sudden, it worked too well!  I ended up with one of the rivet holes countersinked much bigger than it needed to be.  So, while I was mixing up epoxy, I patched the mistake and will see tomorrow how it came out.  I put on a small piece of Dacron to keep the finish as smooth as possible.  One rivet is in the platenut and a #6 screw to keep the threads clean of the epoxy. 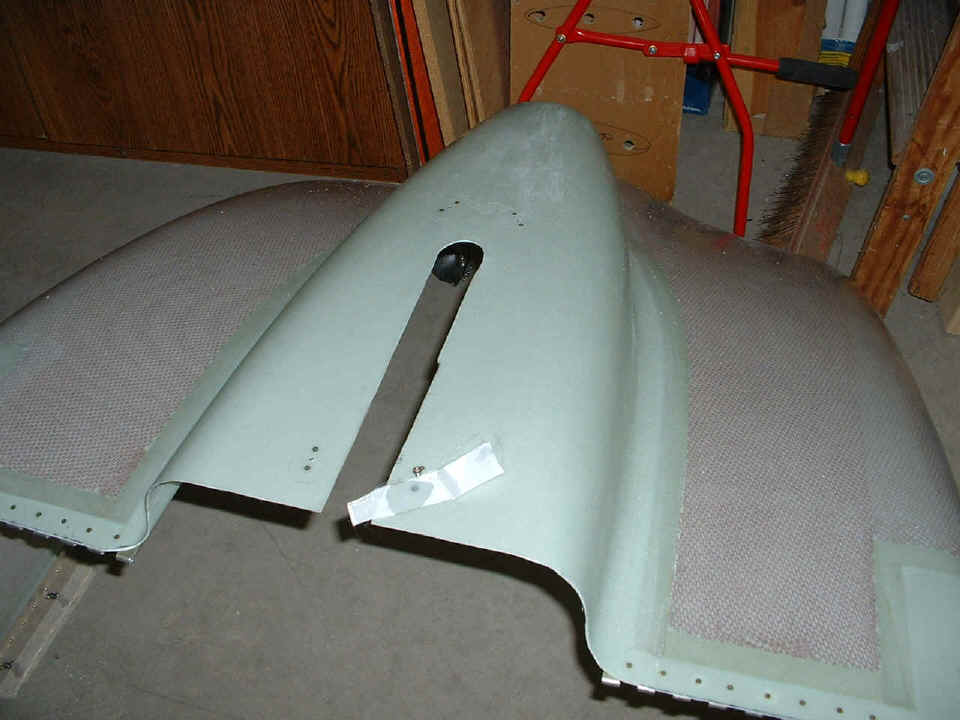 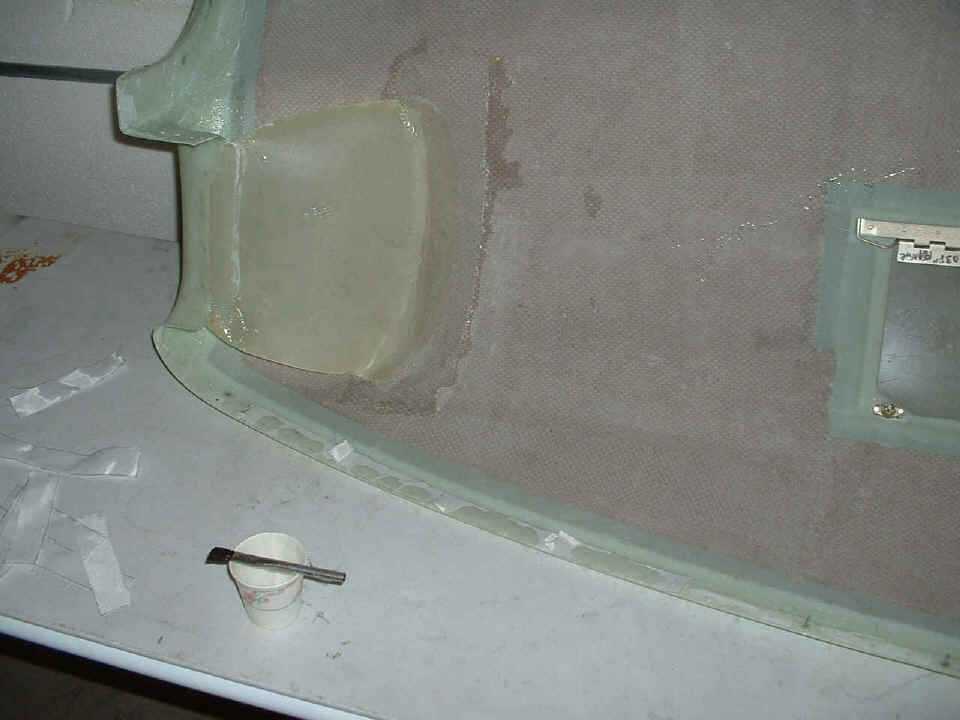 Then I turned my attention to completing the windshield work.  I cut many small strips of fiberglass cloth to fill the low spots across the full width of the forward and side sections of the windshield bonding area.  After that, I put in place the large, long, single fiberglass cloth from side to side and plied it with the epoxy resin.  Finally, I covered it with multiple strips of Dacron Peel Ply as before.   I will know tomorrow if I have successfully filled all the low spots enough to sand the surface to the shape it needs to become. 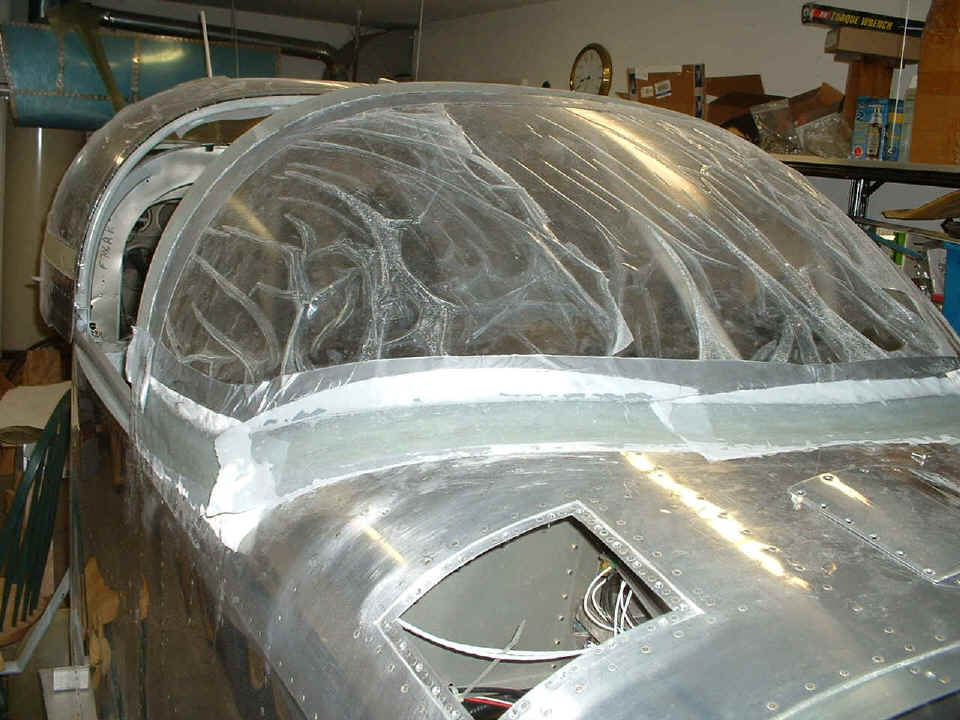 Overall, it was a good day!  Not too much time working in the garage, and I had a chance to get out to do some shopping for the epoxy brushes at three different places and getting some fresh air at the same time.  I also got an email from a business contact that could lead to something in the way of employment.  We shall see...   Meantime, I have this plane to get ready for flight!  I have been working on the airplane as my full-time job since I got laid off from my former day job back on the last day of February 2005.  With all the airplane parts paid for and money in the bank, I am able to put all my time on this project!

March 20, 2005: The first day of Spring brought a nice warm day with sunshine and clean up of the work from yesterday.  I pulled off the Dacron from the patched holes on the nose wheel fairing and drilled out the correct holes in the center of the cross-hairs.  All is fine!   I even got out the countersinked washers and matched them to the nose piece after sanding off much of the extra glass from the nose piece.  It still needs a bit more finishing before it is ready to go, but there it is on its first fit. 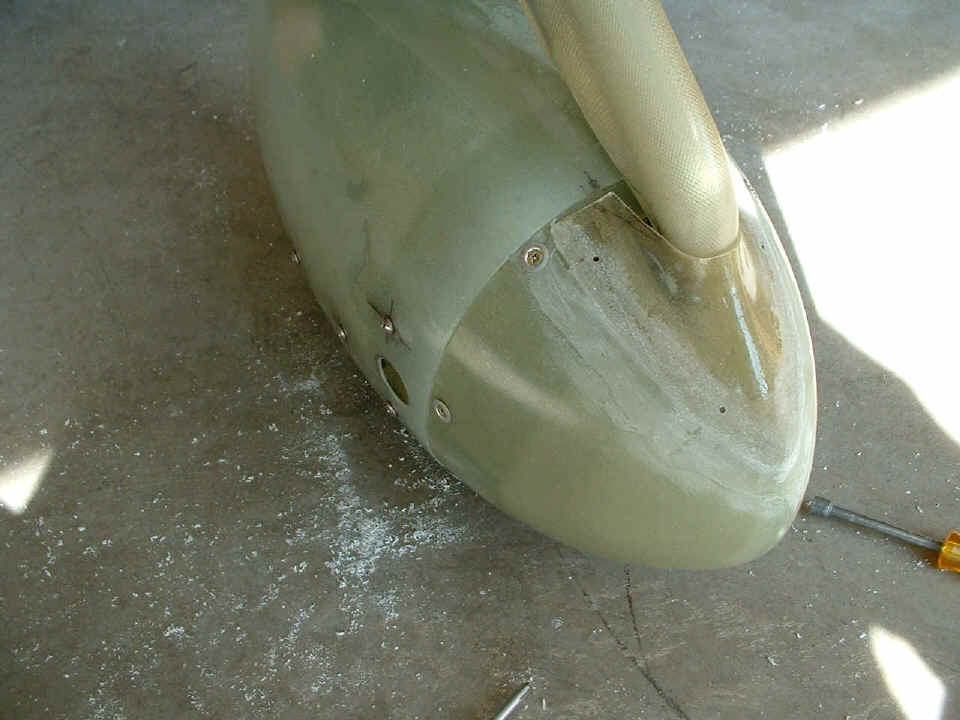 Next came the removal of the Dacron from the upper cowl rivet holes and from the windshield.  The upper cowl required no sanding.  The windshield has enough epoxy and glass to come out right when I finish all the sanding to shape. 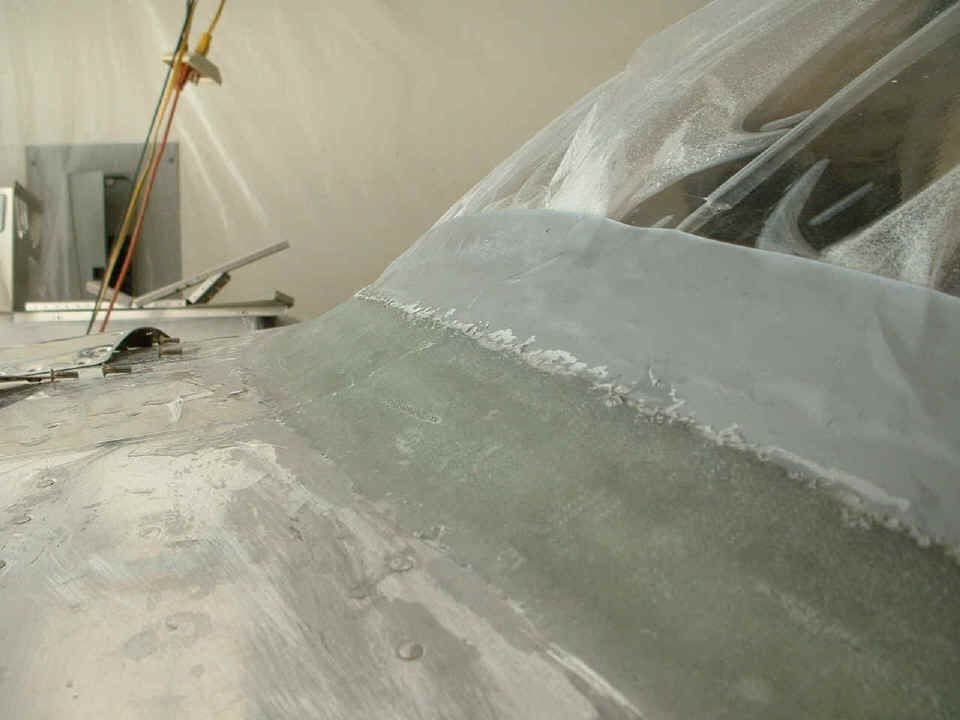 Speaking of sanding, here is the RIGHT side after putting in some time with two different sanding blocks.  Now I have to do the same thing all the way across the front of the windshield. 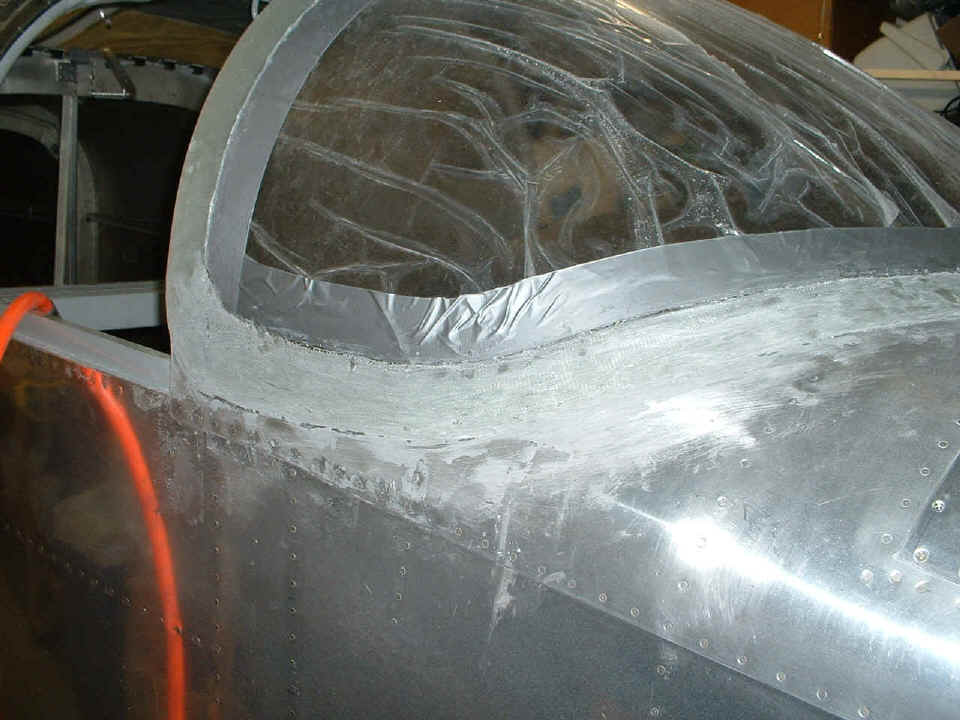 No photos of it, but I did remove the slick packing tape from the plexiglass canopy and beveled the front edge of the canopy to insure an easy closure of the canopy with the overlap of the fiberglass across the top of the windshield.  Since the sanding blocks took plenty of time, it was five hours work time for today's session in the afternoon.  The total aircraft construction time is now 1751.9 hours.

March 21, 2005:  A very short session of only 0.6 hours this evening to sand more of the lower windshield fiberglass transition area.  I spent a good part of the day doing a commercial web site project.  The picture above motivated me to continue working across the front of the windshield sanding off the high points and getting a more uniform surface in the transition from the F7106 forward top skin to the plexiglass windshield.