November 30, 2004: A short session tonight of only 2.5 hours.  I changed the fittings on the primer lines to cylinders 1 & 2 and installed the brass fittings provided by ECI with the engine.  These fittings have fine spray nozzles to better atomize the fuel in the intake manifold.  I had to dig out my old Weller 140-watt soldering iron to do the job and put a high temperature tip on it also. 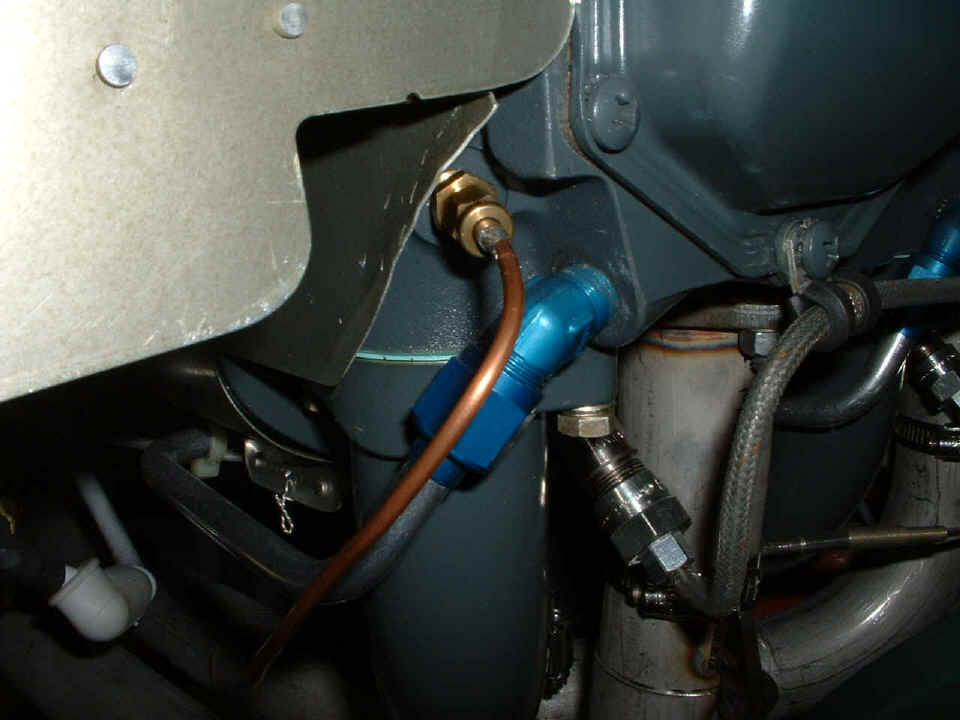 Here is the comparison of the old and new primer fittings.  The brass nozzles are AN4022-1 discharge nozzles.  The blue one does not have the small orifice that atomizes the fuel in the intake manifold.  I also had to salvage the AN800 solder fitting and the AN829 nut from the original brass tubing that came from ECI with the engine.  I will need to get one more AN819-2D sleeve and AN818-2D nut to put one more split in the copper lines on the engine to add priming to cylinder number four. 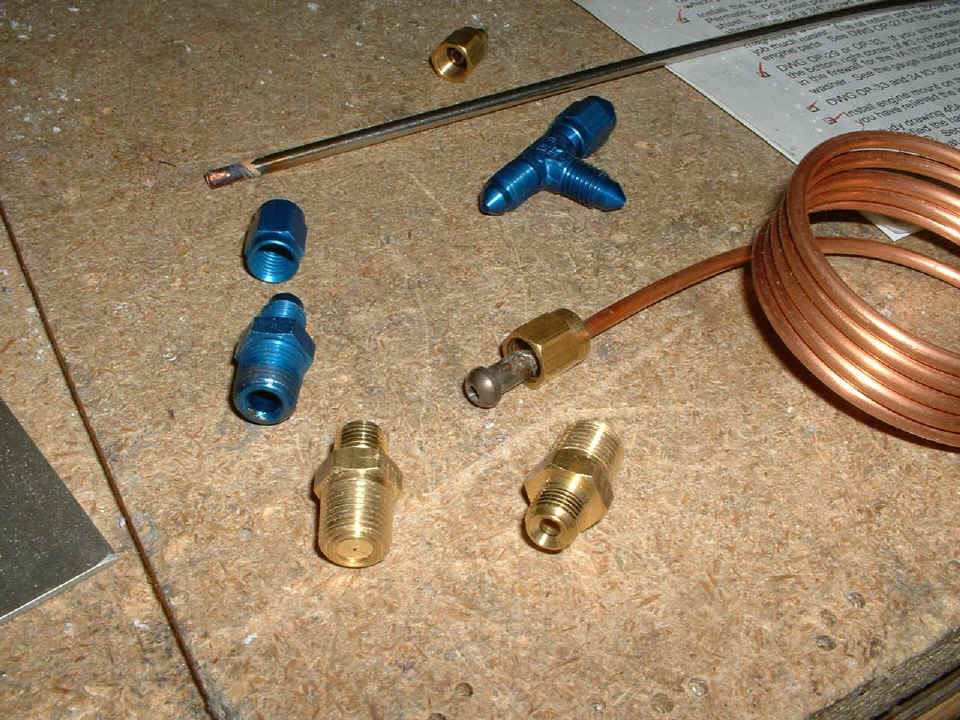 I also worked on the edges of the upper and lower cowl to sand them "straight" enough to have the 1/16" air gap for paint clearance when it goes to the paint shop.  In this very close photo the countersinking of the holes on the lower cowl is already completed, while the upper cowl is yet to be finished in my next session. 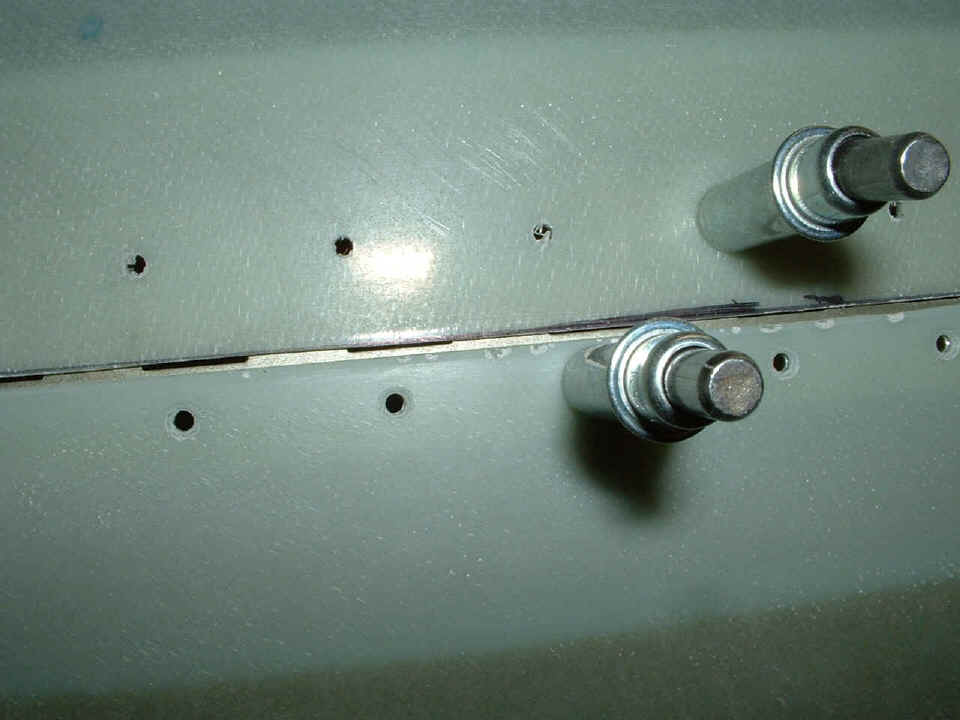 I placed an order with Aircraft Spruce & Specialty for a Bogie Tow Bar, and also ordered fiber glass materials needed to finish the air scoop to the filtered air box on the lower cowl.  This will also be enough fiberglass stock to fit the windshield when that comes due soon.

December 1, 2004:  I countersinked the holes for the side hinges on the upper cowl shown in the photo above.  I then cut out one tab from a hinge and put in the matching  #8 platenut to hold the side hinge wires in place on the lower cowl.  You can see the flat-head rivets peeking out from under the tab.  These two rivets are also counter-sinked into the fiber glass cowl. 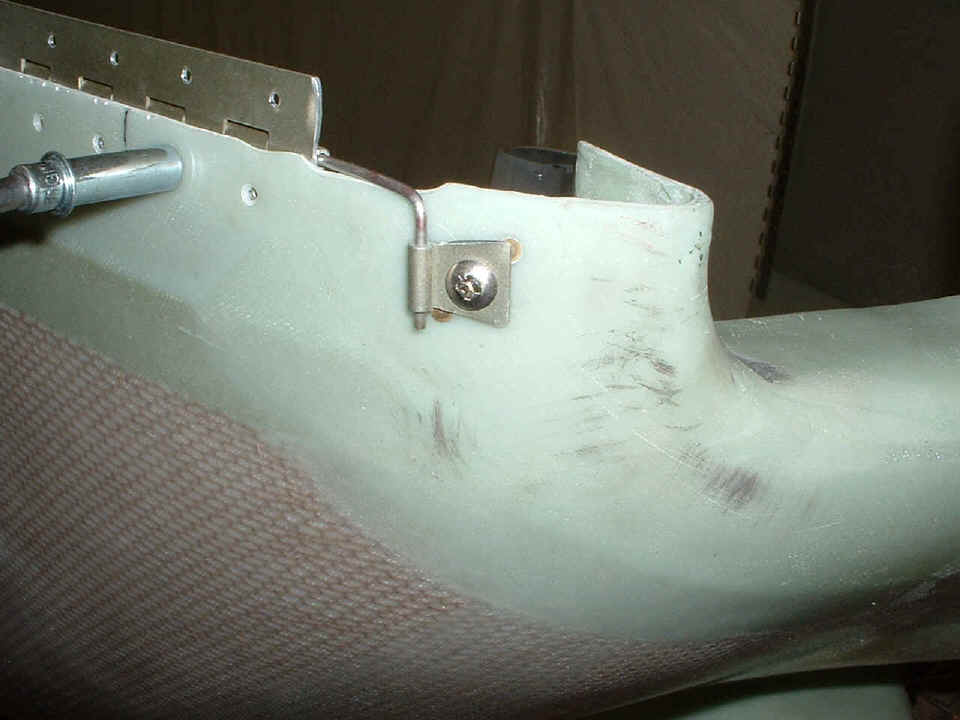 Here is the view of the three platenuts on one side of the spinner area of the cowl.  There are three more on the other side.  You can just make out the top of the platenut and one rivet that holds the hinge wire on the pilot's side of the cowl. 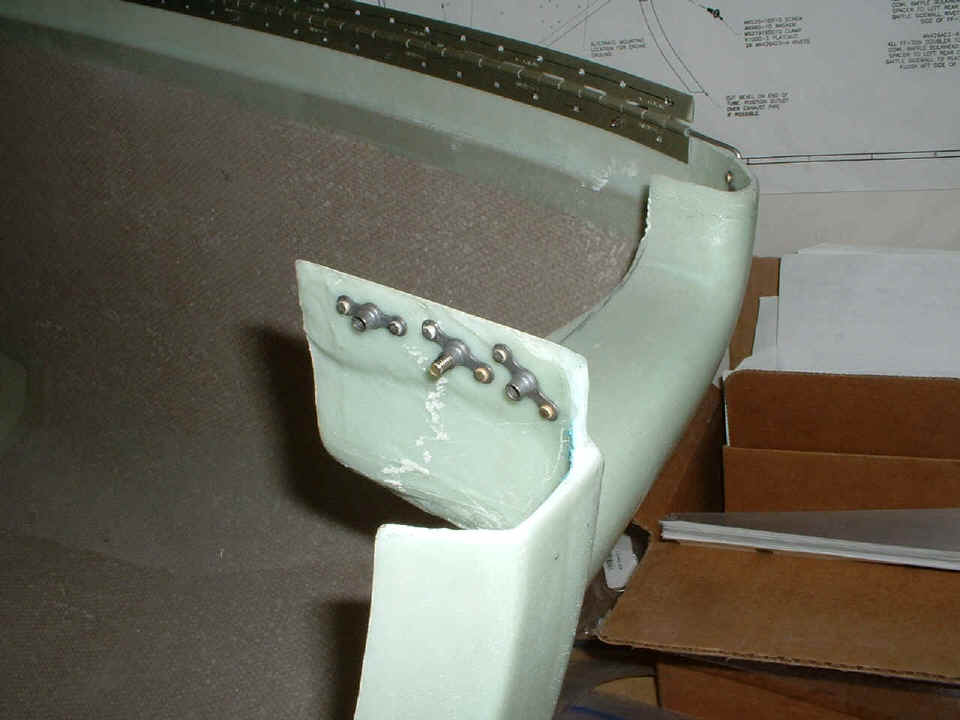 The order I placed with Aircraft Spruce & Specialty yesterday was delivered by UPS late today.  Here is the Bogert tow bar for RV-*A's.  I also received the two weights of fiberglass cloth, a special "pizza cutter" for cutting the glass cloth, West Systems epoxy resin & hardener, and the matching pumps to dispense them in the proper ratio. 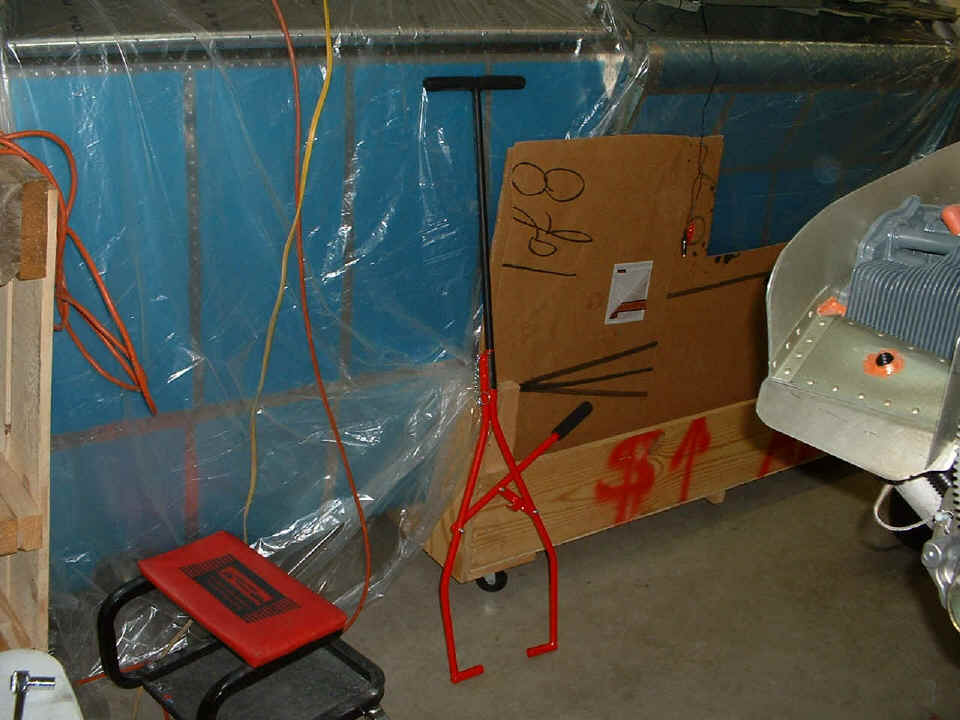 After finishing all the prep work on the cowl parts, I attached them to the fuselage and to each other, then match-drilled the upper cowl to the hinges mounted on the top of the fuselage and firewall.  I put a small flourescent light inside the cowl to be sure I knew where the hinges were underneath the upper fiberglass cowl.  The marks that I had previously placed on the cowl were very close to the center of the hinge flanges.  I also replaced the hinge on the oil door with the correct-sized hinge.   The one I had originally used was the larger size used at the interface of the cowl sections with the fuselage/firewall.  The smaller hinge is the same size used along the seams between the upper and lower cowl sections. 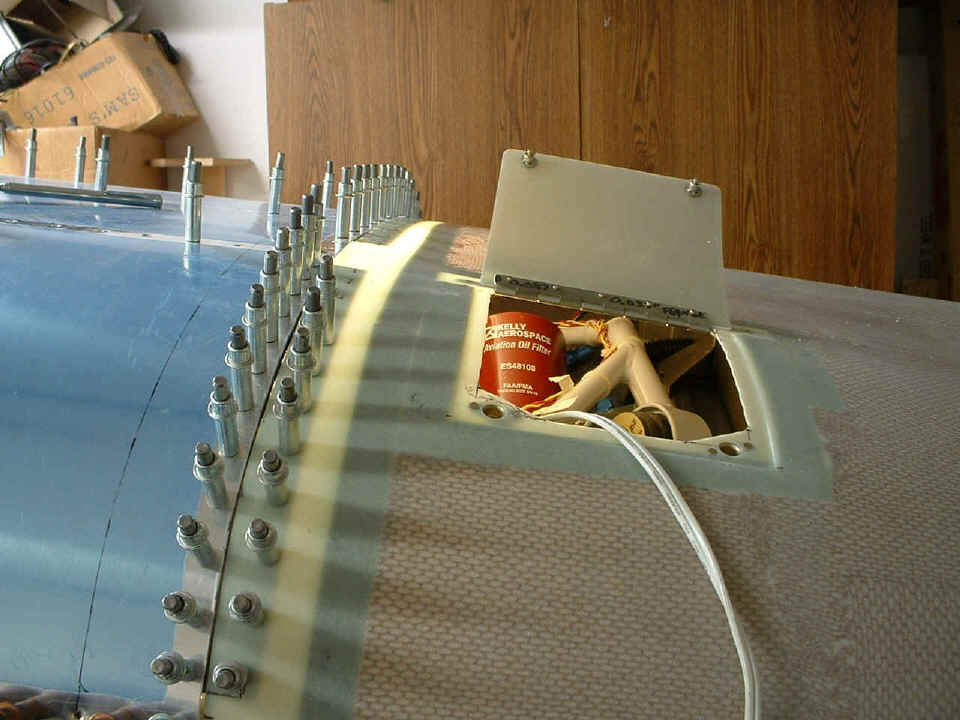 This is the view from the pilot's side showing the drilling and cleco process on the long hinge.  This photo and the one above were both taken with the flash turned OFF to show the light coming through the cowl.  I had my digital camera mounted on my tripod for these shots and used the 10-second delay timer to insure the camera would not be vibrating when the pictures were taken. 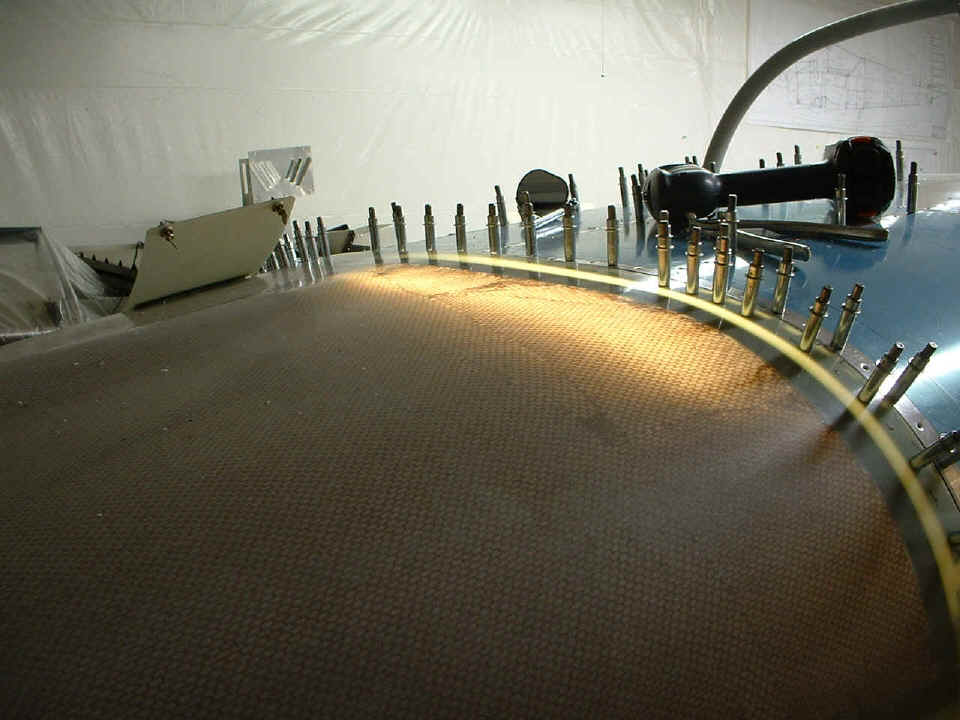 And as always, step back and see the finished work for the evening with the camera flash used for this hand-held picture of the cowl mounted on the fuselage.  I also put a couple of the screws in place on either side of the crank shaft near the spinner.  I need to drill out the holes just a bit oversize to be sure the screws will line up with the threads in the platenuts riveted to the lower cowl.  You can also see how the stainless steel wire is secured for the side hinges with a single hinge eye screwed to a platenut in the front corner of the lower cowl. 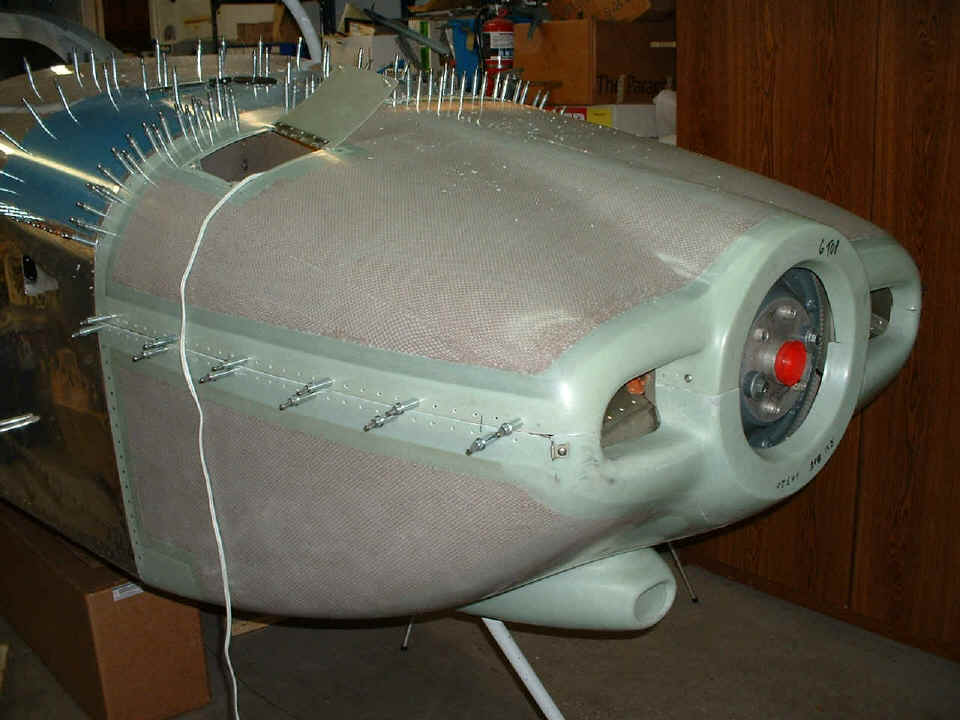 The project gets another 3.8 hours added tonight for a total of 1382.5 hours of actual construction time.  I also placed another online order with Van's and discovered that my last online order was shipped on November 30th.  The new order is for the wing-tip marker lights and the strobe lights.  I added a pair of interior "eyeball" lights to illuminate the panel gauges and possibly for viewing maps and charts at night.  I also ordered the two non-skid wing walks from Van's in this new order.   Sure, it is premature since it is a long time until this bird will be painted, but I wanted them to urge me on in my construction endeavors!  I will probably fly the airplane to the paint shop some time within the first 40 hours of test flight time.

I also posted some pictures today of some of the first Cessna 172's I flew as a student pilot and later when I was still living in the West Palm Beach area in the early and mid-1990's.  I last flew one of these airplanes on August 27, 2003 when my friend and boss wanted to survey some rural home sites between Lake Okechobee and Labelle, Florida.  CLICK HERE to go directly to that photo page at Lantana Airport (KLNA).