October 8, 2004:  The propeller is the focus today in a short work session.  I cut out the back plate and clecoed it to the doubler plate that was already cut out to the proper shape to fit on the propeller.    Both aluminum parts will be primed when I have finished fitting the cooling baffles and disassemble them from the engine -- but that will be a while from now. 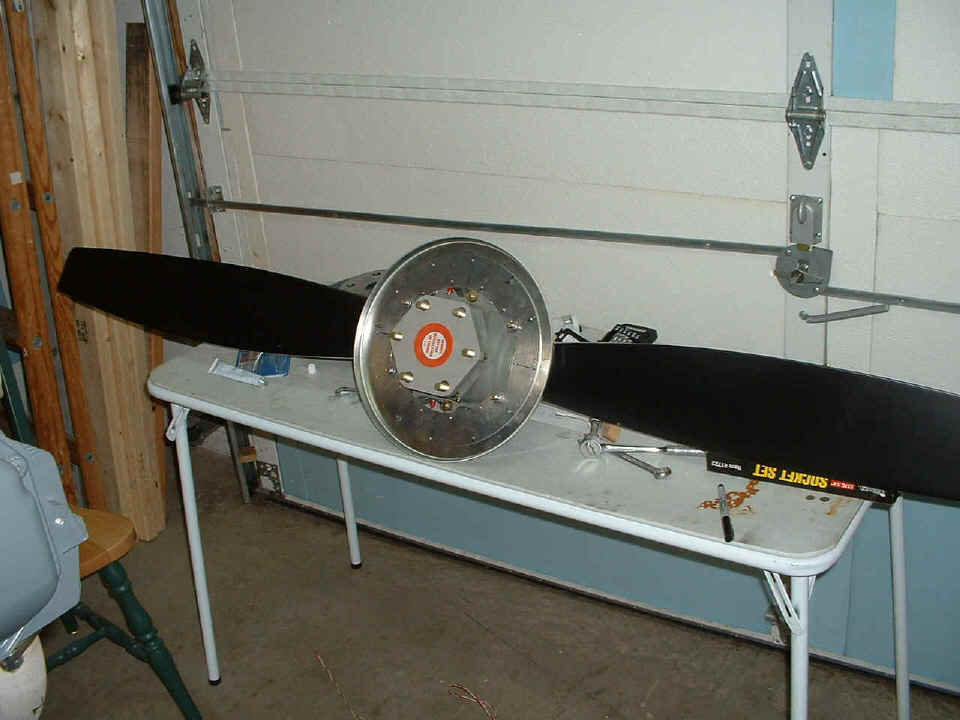 I was so excited I started to put the prop on without the ring gear.  I woke up from that before I had gotten too far into threading the bolts into the flange on the engine.  Everything is in the proper place as you can see.  As a precaution, I took the wire off the starter motor to avoid any nasty accidents like knocking down the overhead fluorescent light that hangs above the engine temporarily. 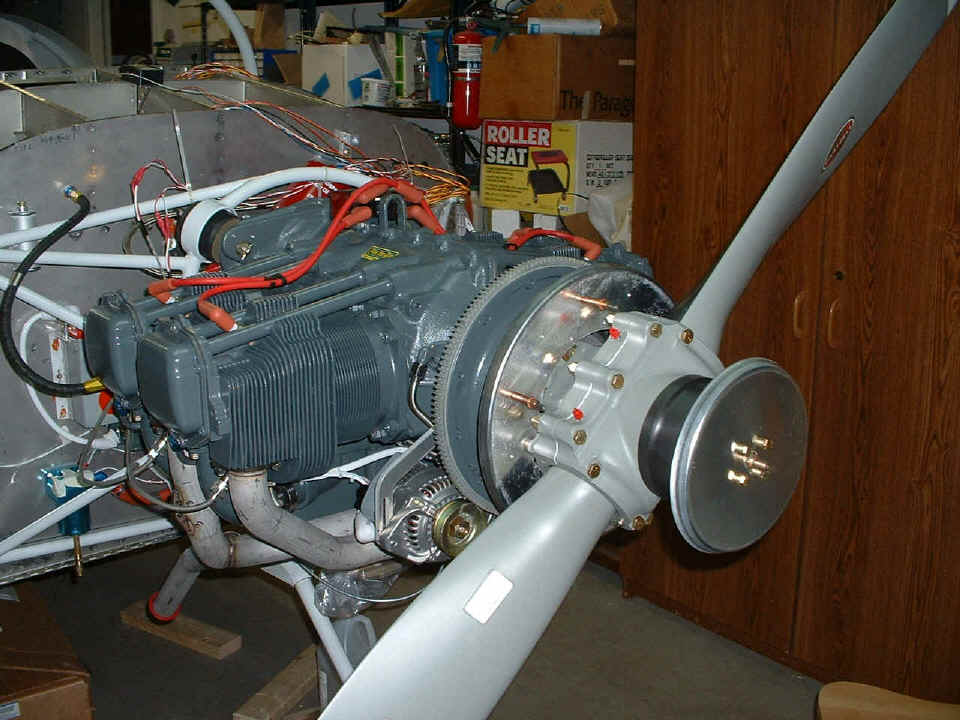 Here is the side view.  I have noticed that the 60-amp alternator from Van's Aircraft will only adjust 1/2" at the bottom of the adjustment range before it hits the mounting bracket that is bolted to the bottom face of the engine.  I will know if that half an inch is enough when I get the lower half of the cowl in place to check for clearance issues.  If it is not enough range, I have this bench grinder and the brackets on the front and rear of the alternator will get a massage. 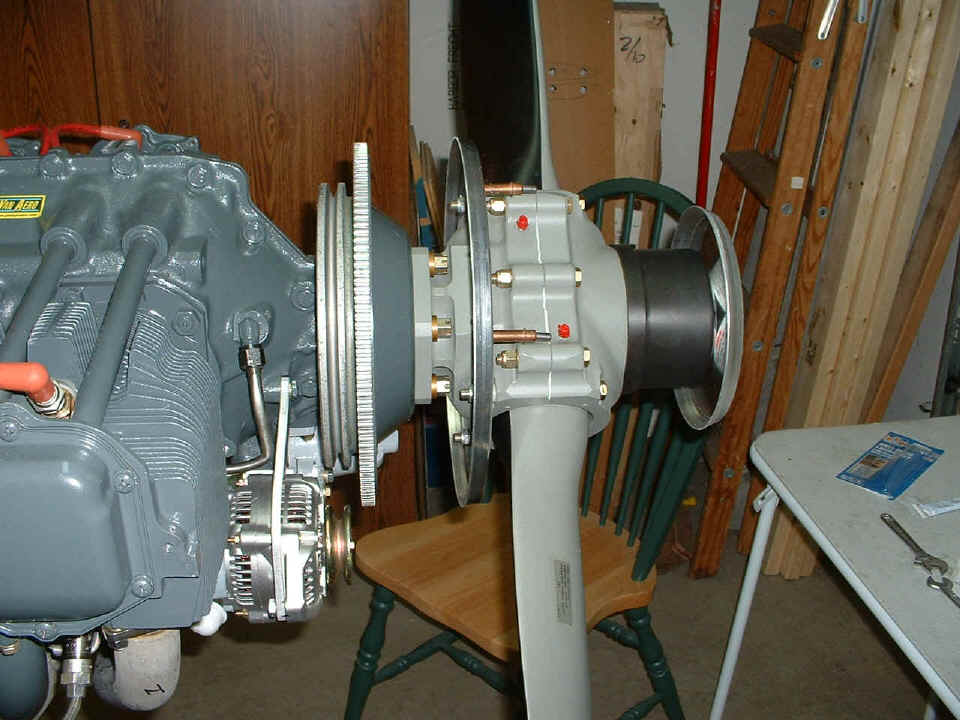 October 9, 2004:  I finished the initial fit of the exhaust system by adding the heat muff and getting the supports bolted to the aft corners of the engine block and the clamps around the pipes at the correct points.   You cannot see it in this photo, but there is another brace between the two clamps that hold the exhaust pipes apart at a constant spacing between them.  As things start to get crowded in this area, I am finding that I need to reroute the big #2 electrical cable that goes from the solenoid to the starter motor.  That will come later when the pipes are off again.  A large red air duct will go from the round air fixture on the firewall beyond the battery box -- down to the LEFT port of the heat muff where you can see the number "22" on the side of the port.  The right port on the heat muff is the input port and will also have a red air hose coming down from above the engine cylinders from the back baffle plate. 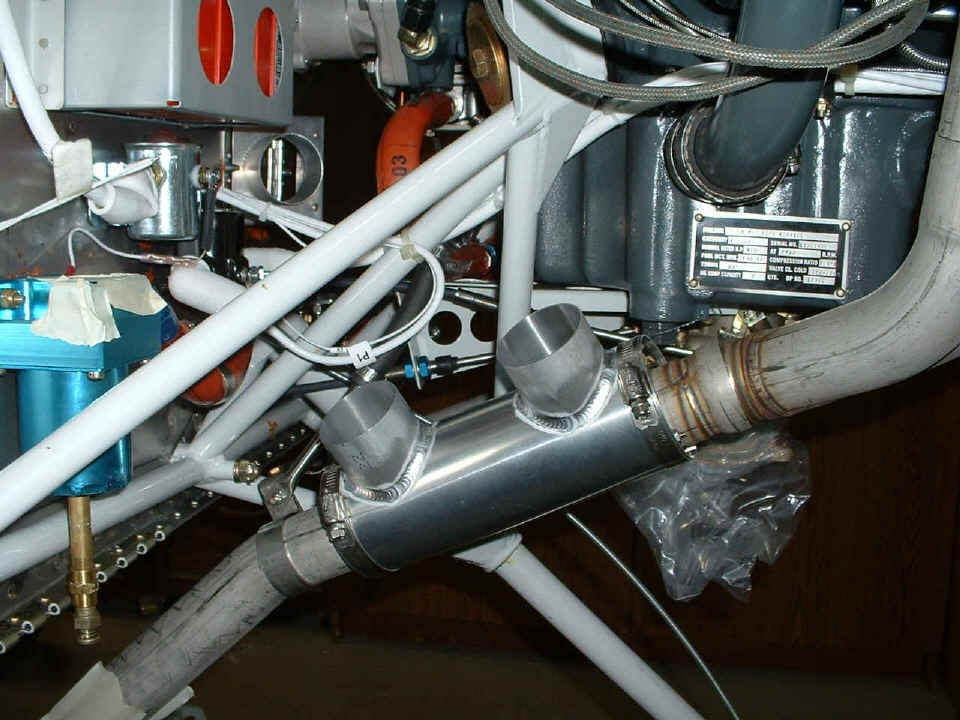 The mail came this morning with a few more circuit breakers from Aircraft Spruce & Specialty, along with six feet of Tygon plastic tubing, and some plastic barbed fittings for the pitot/static system.  I connected the air operated gauges that are already in the panel, but will not be able to finish until the Dynon D-10A gets here sometime in the next two weeks.  I remembered to close all the open tube ends to keep the little critters out, but I have not seen any in the garage.  I also went down to Ace Hardware to find a small, barbed plastic "TEE" to put in the plastic manifold pressure line feeding the Light Speed Electronic ignition module and the Grand Rapids Technology engine monitor from the intake manifold pressure port of engine cylinder number three. 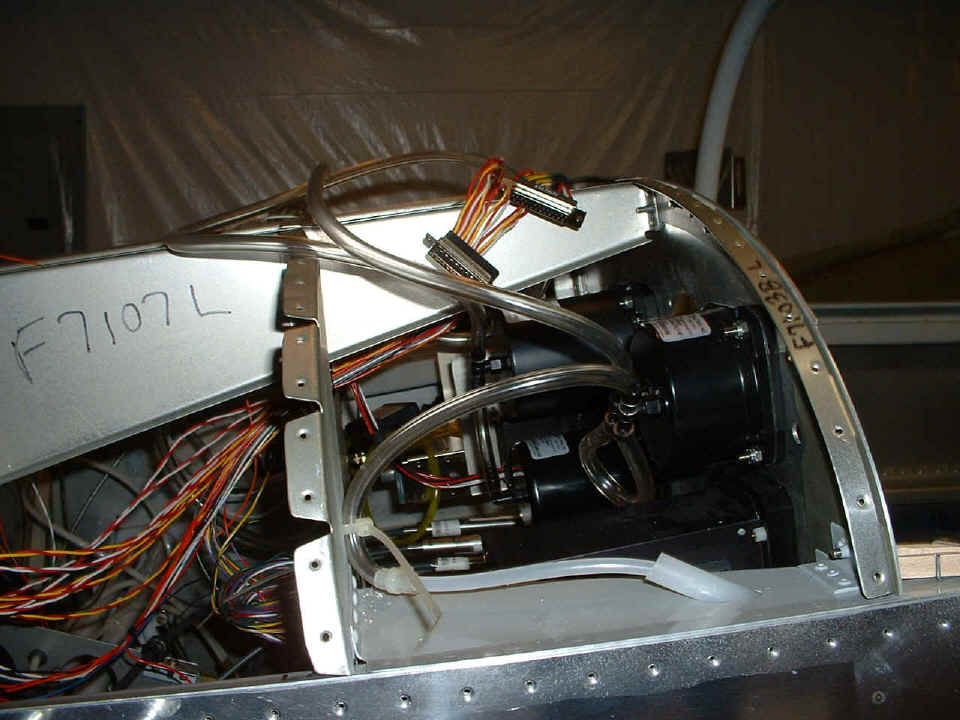 While my mind was on air operated systems, I got out the pitot probe for the Lift Reserve Indicator (LRI) and installed it on one of the blank wing access panels.  I will end up putting this on the right wing aileron bellcrank access location.  That one is outside the prop arc and will insure proper operation of the LRI as an angle of attack device/stall warning meter.  If you look closely, you can see a small hole near the smallest tip of the probe and another hole on the broader front face about half and inch down toward the plate.  You are looking at this thing "up side down" in this photo. 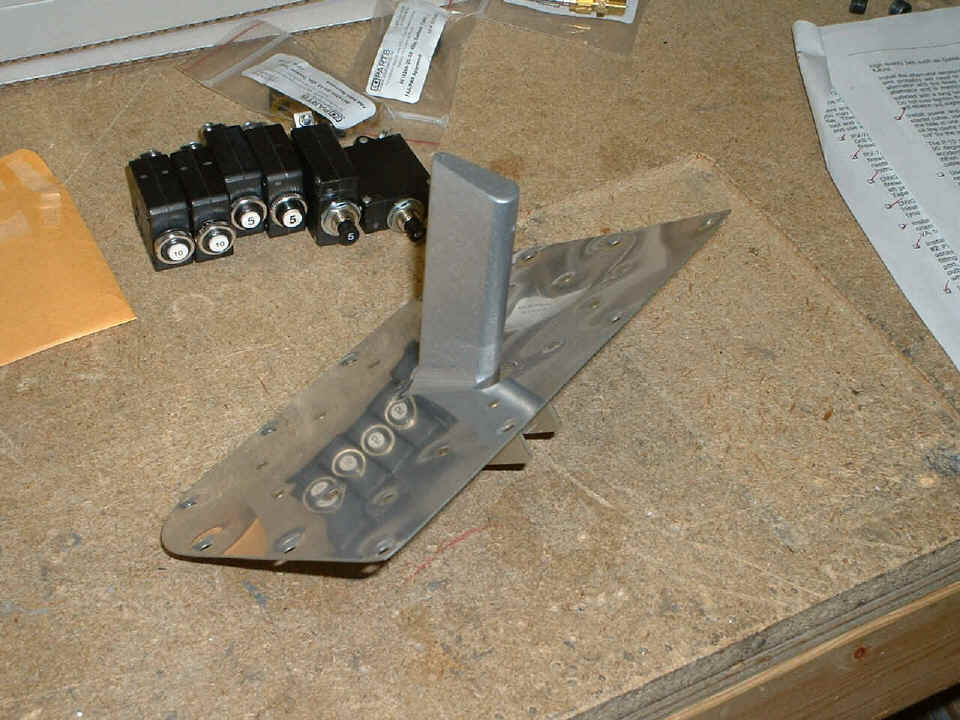 You can see the probe from "inside the wing" in the photo below showing the two pressure connectors from each of the outside ports.  The port on the front side of the probe is visible in this photo near the sheet of paper in the background.  The two pressure lines connect to the LRI meter on the panel to move the needle left or right based on the differential pressure on the two ports on the probe.  It will be inclined about 50 degrees from the horizontal.  This will expose both ports to the air flow on the bottom side of the wing.  The port on the front of the probe drives the needle on the LRI meter toward the GREEN range (good LIFT).  The port near the rear of the probe on the bottom drives the needle toward the RED zone (STALL warning).  It is a totally passive system like an airspeed indicator -- no electronics, just differential pressure moving a needle inside a sealed meter. 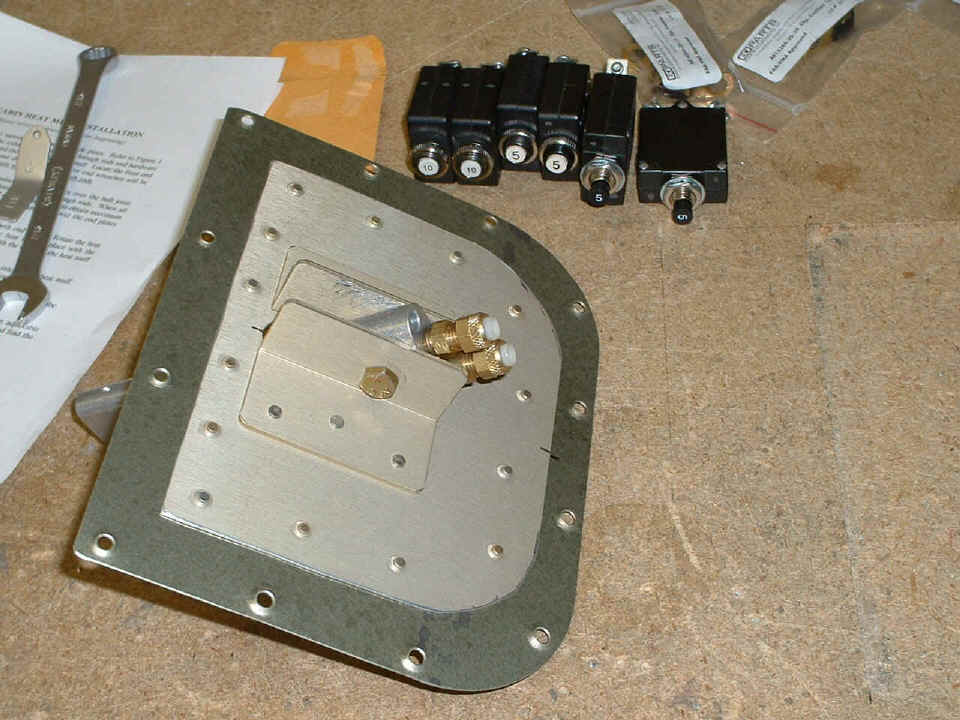 I bought enough Tygon tubing to run from the instrument panel down to the wing on the left side of the fuselage for a connection to the aluminum tubing coming from the pitot tube.  It was when I was considering how to connect to this tube when the wing gets attached that I noticed I would have to move the point of entry for this tube on the side of the fuselage.   In order to do that, I had to disconnect the tube on the inside of the wing near the aileron bellcrank and unthread it from the rib closest to the fuselage.  I will have to make a couple of bends in the tubing to move it away from the aileron push-rod and allow me to get a good connection to it with the Tygon plastic tubing. 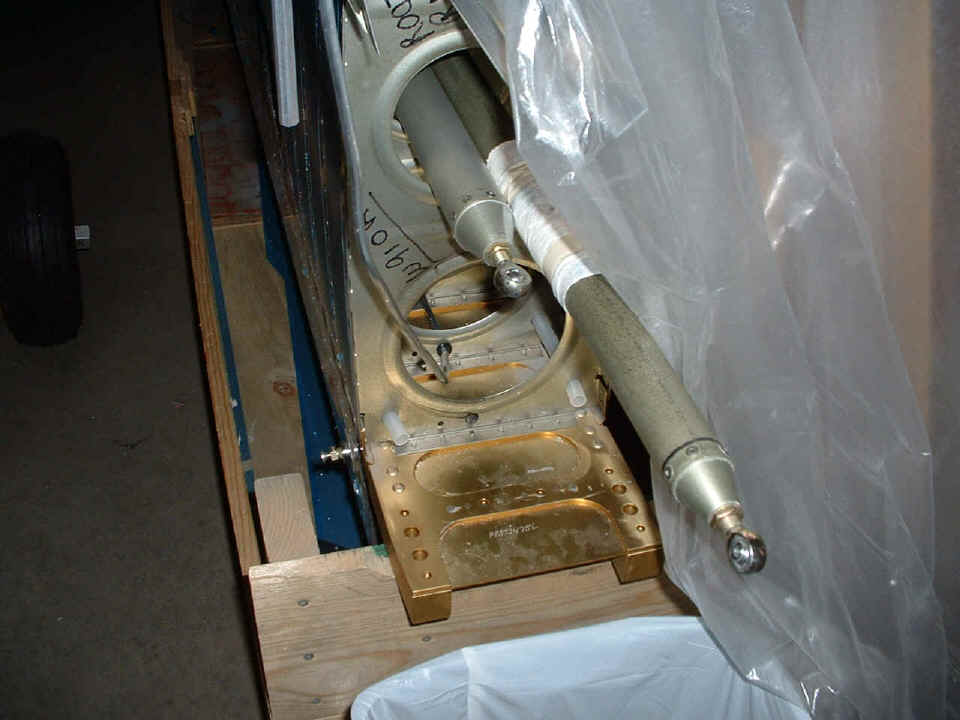 The push rod with paper towel and masking tape on it is the one that I disconnected from the aileron bellcrank in this wing.  The other rod is the elevator push-rod.  These wing lightening holes provide a good storage space for these long items and my spare aluminum angle stock.