December 14, 2003:  Several road trips later for the company, the intrepid RV builder gets another turn at making progress on the airframe.  The RIGHT armrest was riveted in during a very short session on December 6th.  Since it is the mirror image of the LEFT armrest, I did not bother with any photos.   Yesterday, I managed to get the static air ports installed in the aft fuselage sides and to install the aileron manual control knob mounting plate.  The fuselage is on its LEFT side on the saw horses.  I turned the camera to align with it.  As you can see at the LEFT side of this photo, gravity is pulling down the right rudder cable since it is attached to nothing at either end.   This photo was only intended to show the static vent tubing mounted to the F-708 bulkhead. 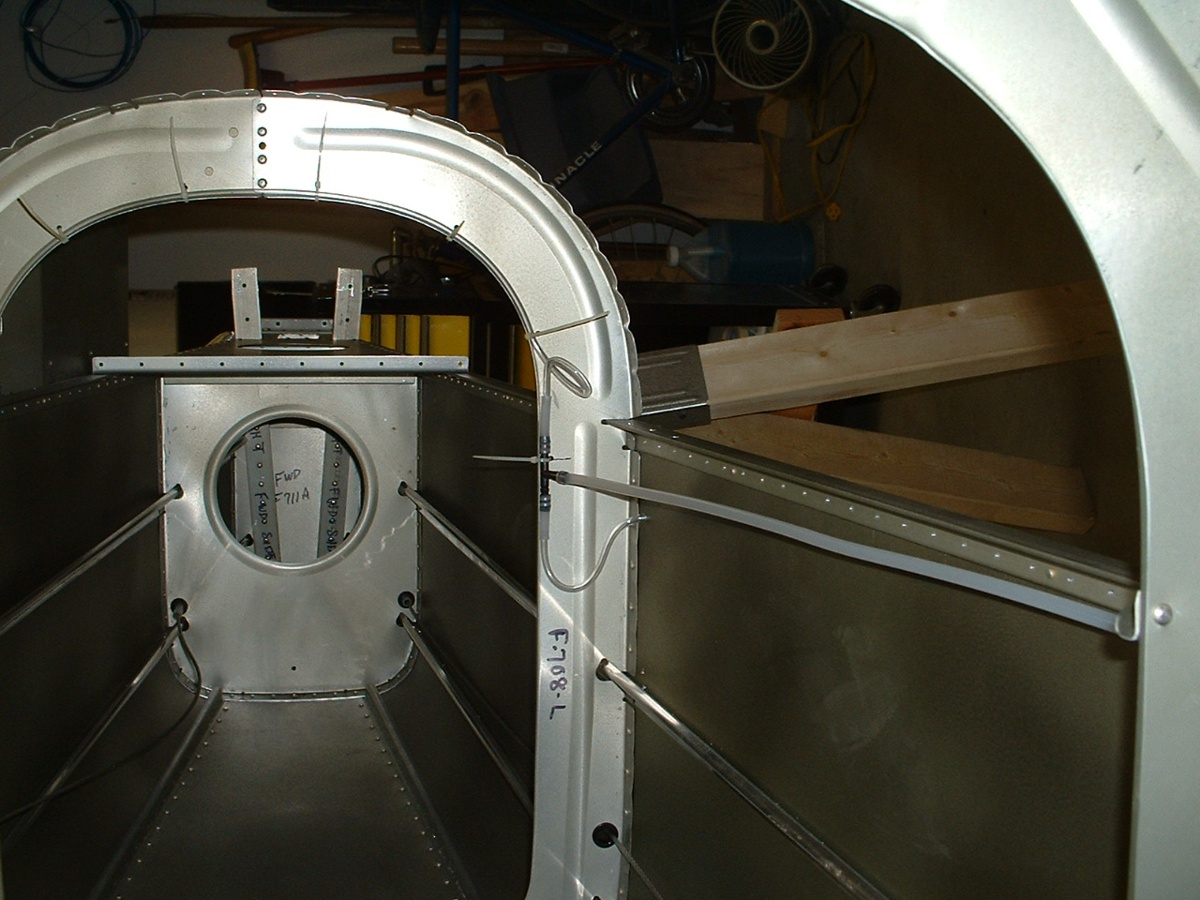 Here is the reason I had the fuselage on its side.  It is much easier to install the aileron trim control with this orientation.  Again, I have aligned the camera to a "normal" view for this part.  The springs are not attached yet, but the mechanism is in place.  You can see the engraved serial number on the aft wing-mount bulkhead just beyond the control stick assembly.  That is the elevator push-rod just below the trim control. 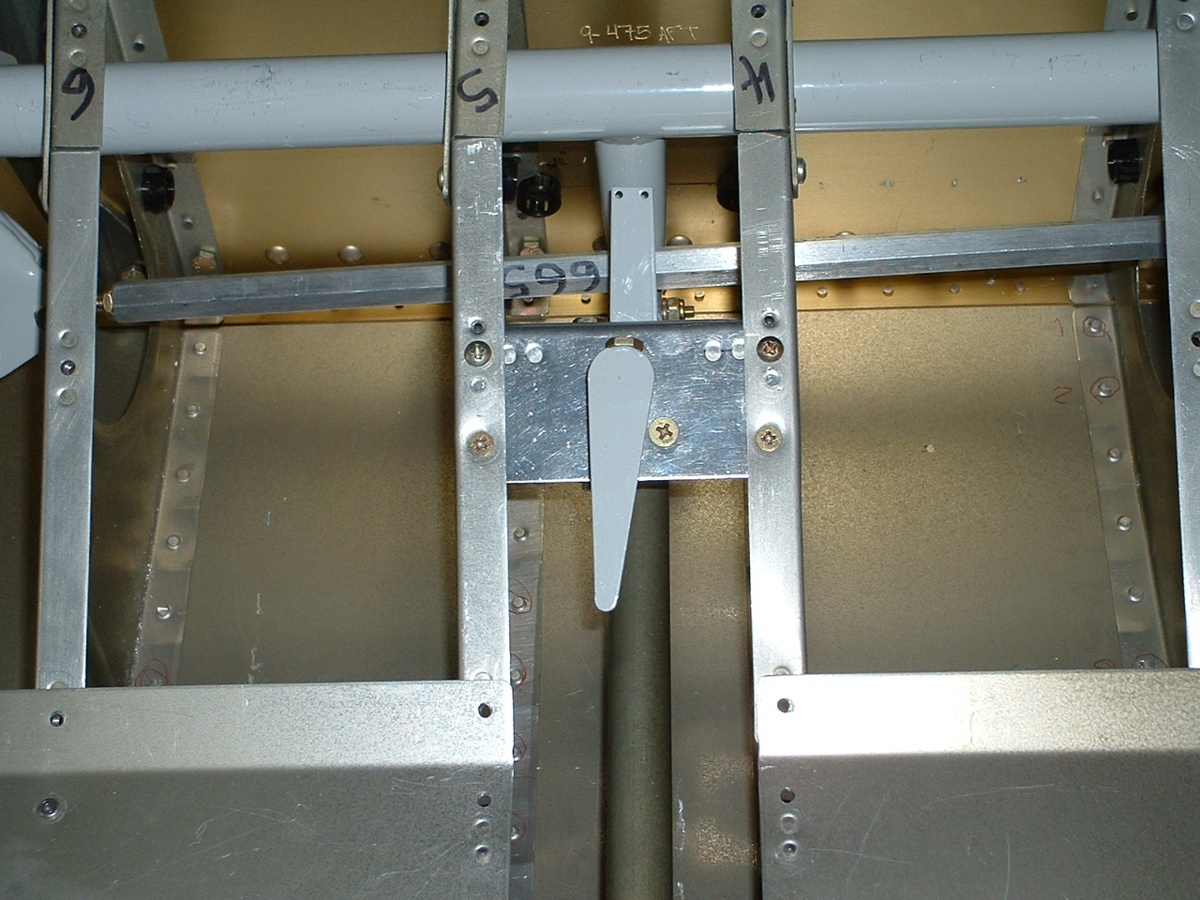 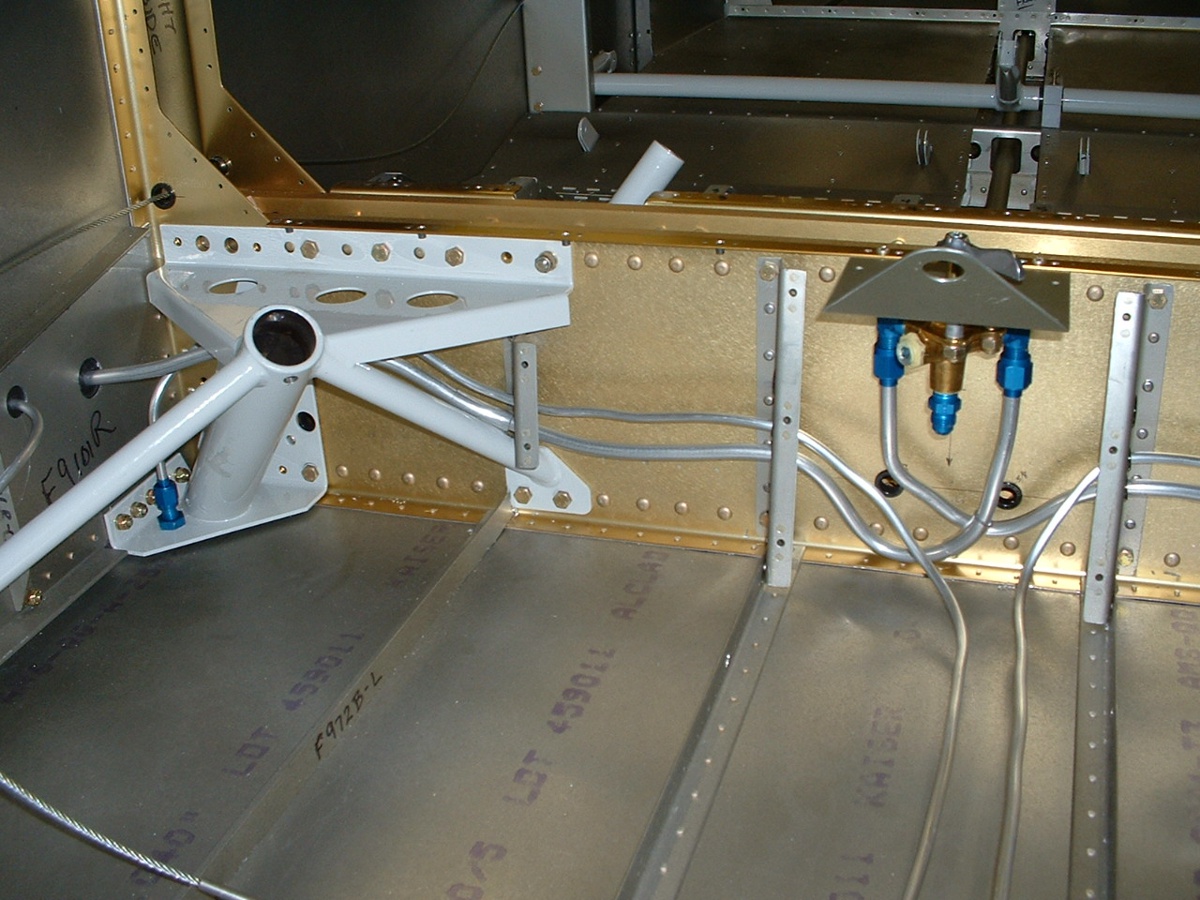 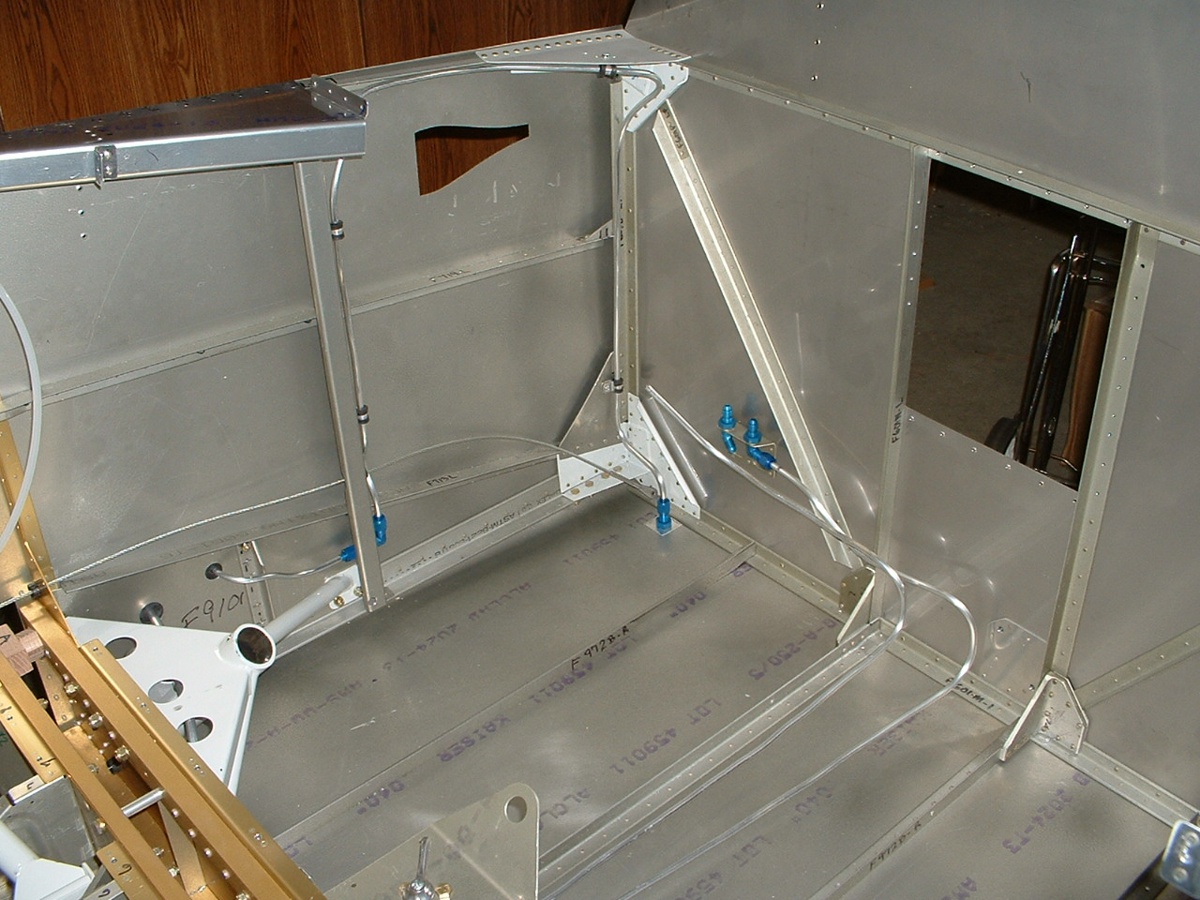 December 16, 2003:  I ordered the electric fuel pump from Van's to allow me to install the fuel line from the selector valve to the pump.  It will be mounted on the firewall in the picture above.

December 17, 2003:  The Wright Day to have a milestone in the RV-9A project.  This is the 100-year anniversary of the Wright Brothers first powered flight.  I finished the fuel vent ports by installing wire mesh screens on them after grinding a 45-degree face on both ports.   I used ProSeal to attach the mesh screens to the ports.  I also installed the fuel line that runs from the fuel selector valve to the RIGHT fuel tank -- it shows up in the second photo above this paragraph.  I also installed both metal brake lines that run from the firewall to the landing gear mounts.  They are visible in both the photos above.  I will cut them to the proper length when I install the last fuel line to the fuel pump.  Here is the milestone I was talking about, the RUDDER cables are finally attached to the RUDDER and the pedals. 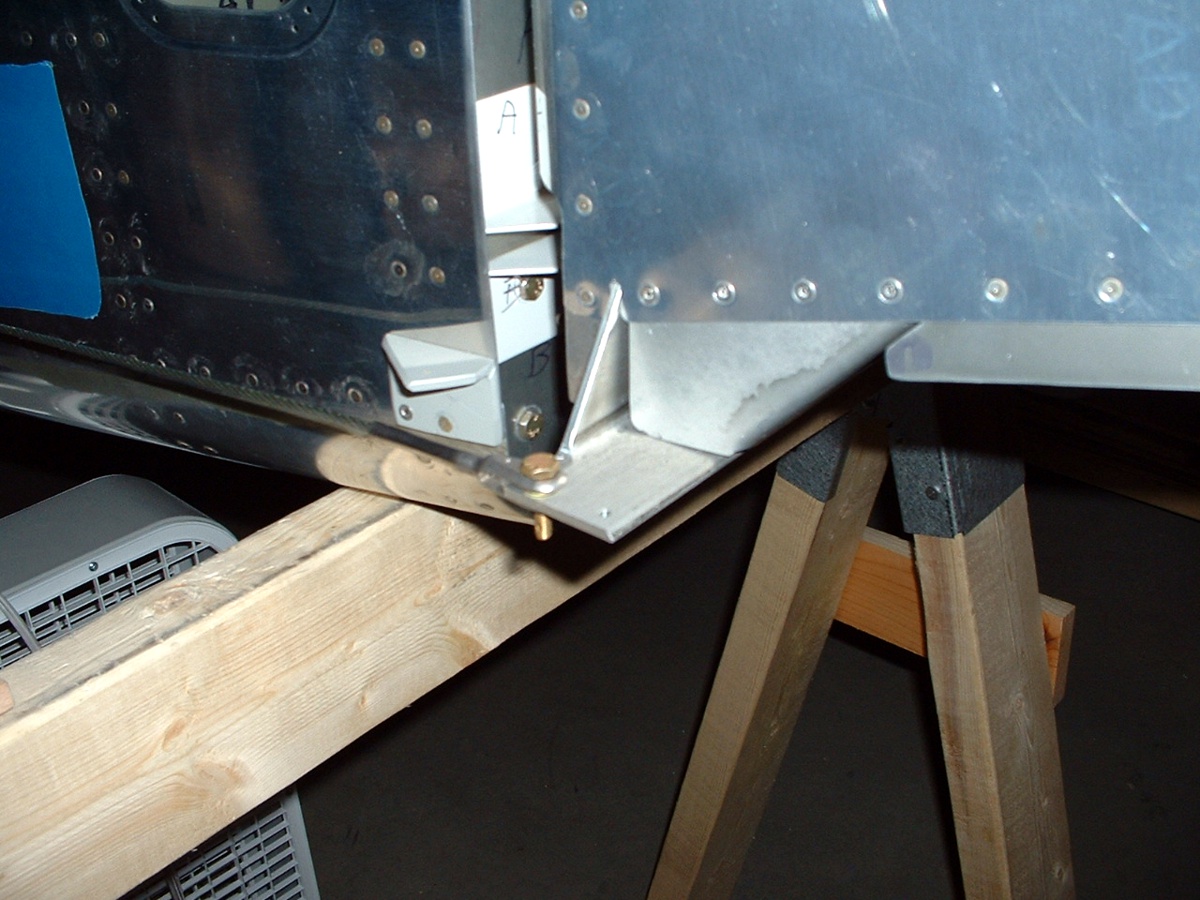 Yeah, that's a temporary hookup using coat hanger wire, but I thought it would be better to wait until tomorrow to do the real steel links when I am rested.  It was getting late when I was doing this. 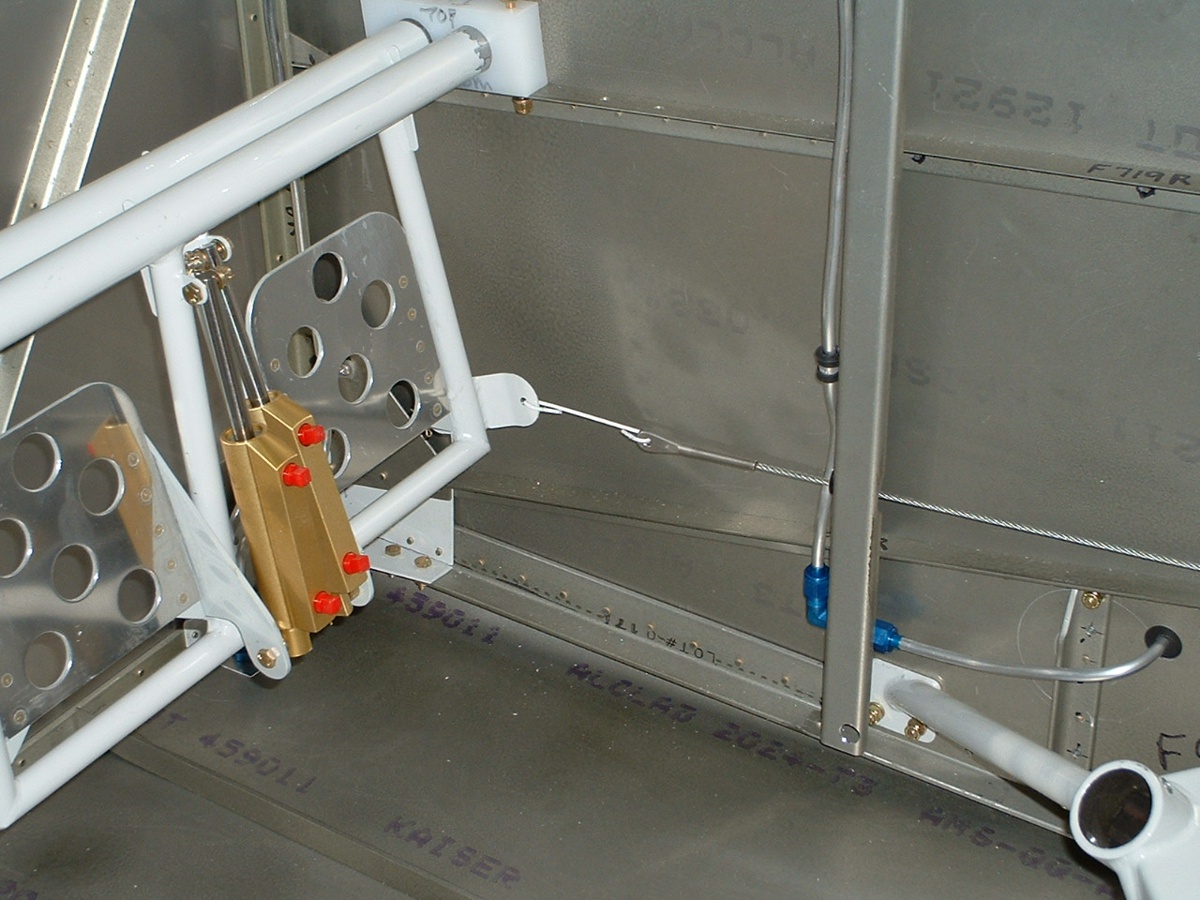 Speaking of fuel lines and vent lines running to the wing tanks, here is the view of the lines exiting on the LEFT side of the fuselage.  They will remain this way until I get the wings attached for their initial fit, etc. 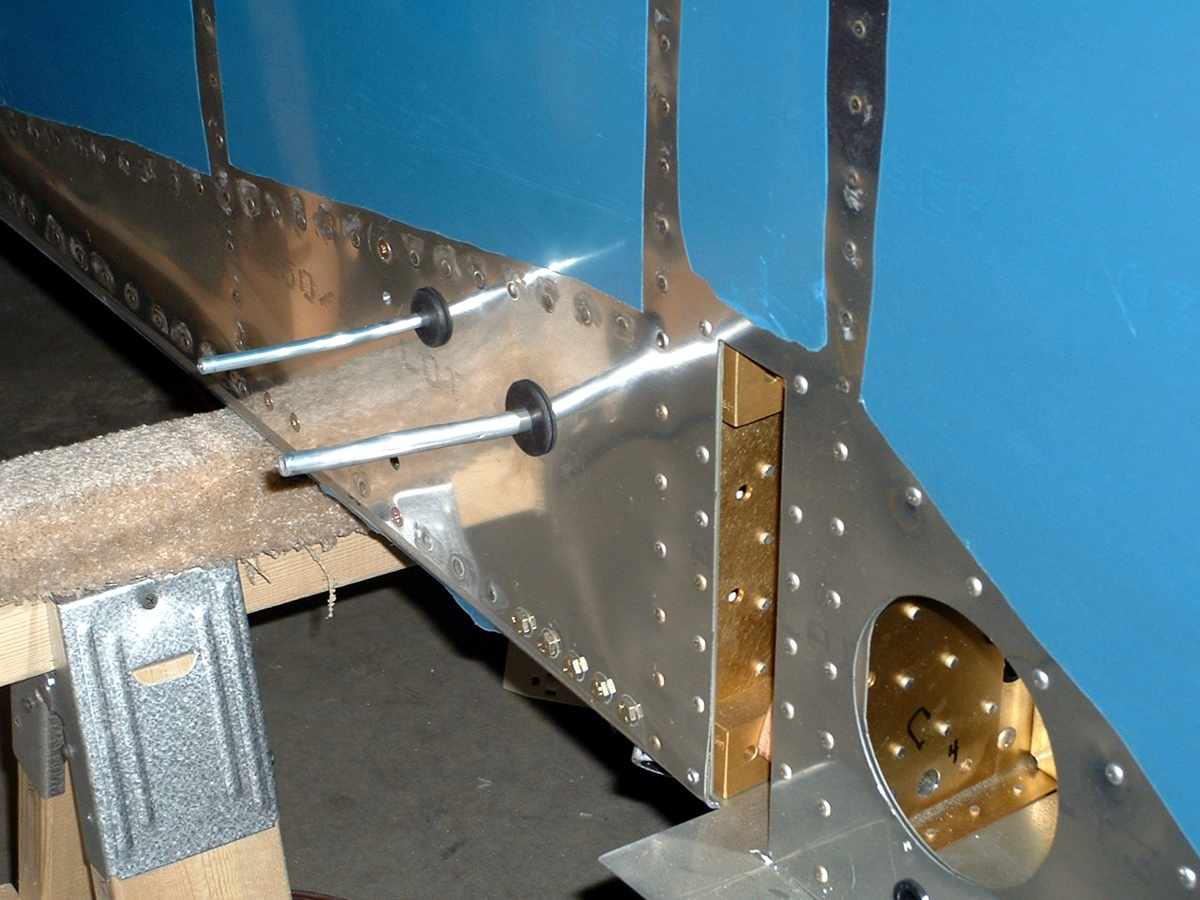 And the last shot for this page, the ceremonial photo showing the tail sections attached again, and of course, my temporary seating arrangements to check out the rudder pedal movement and adjustments that may be needed.  The vertical stabilizer has the blue plastic removed, making it a bit harder to see.  The red cushions are from my old high school in Dalton, Georgia (23 miles south of my current abode).  Notice the time on the clock on the wall is 1:05 AM.  It is now approaching 2 AM as I get ready to publish this updated page. 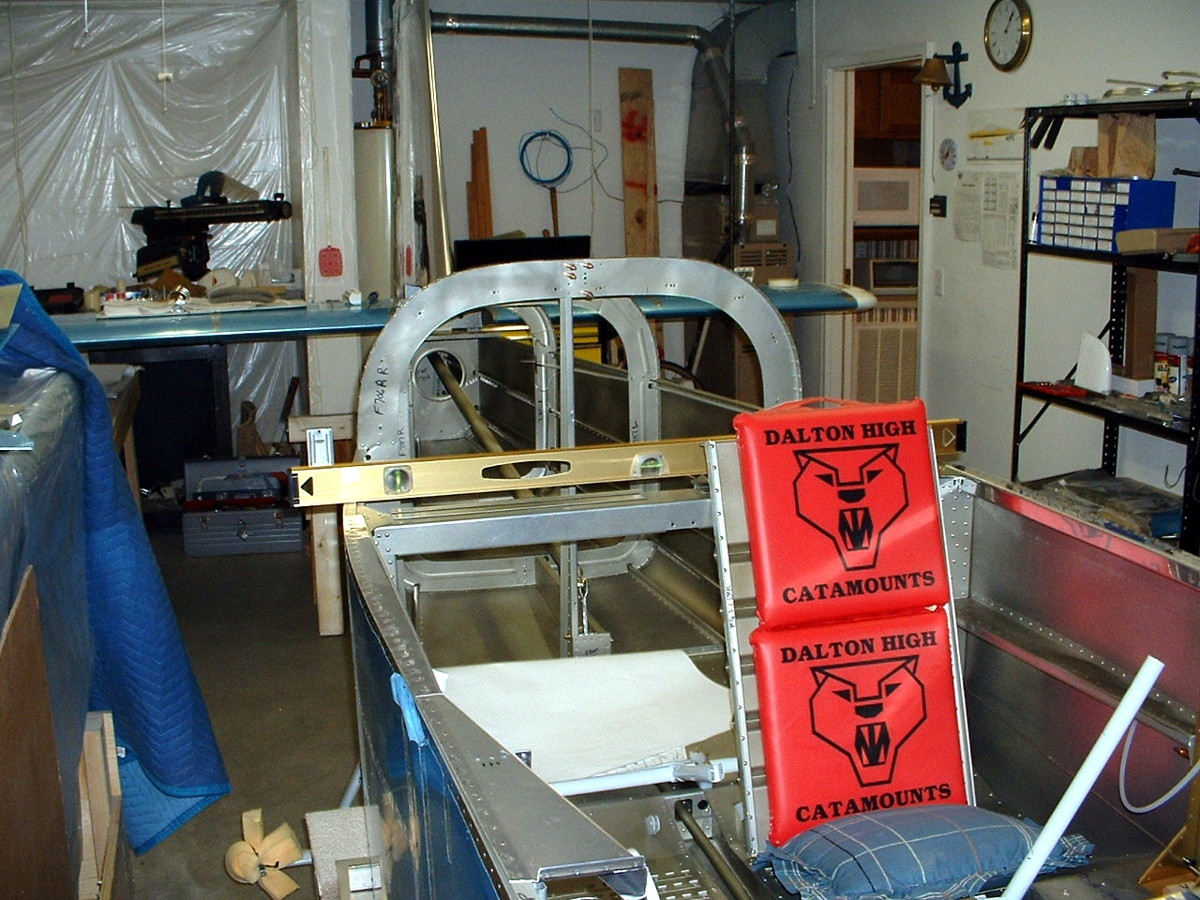