May 28, 2003:  With some of the past few weeks on the road with the new job, I have been remiss in my work on the RV-9 until this week.  Yesterday, May 27th, the weather was good and I managed to get all the parts of the flaps and ailerons primed on the driveway outside.  Two of the neighborhood kids dropped by to see what I was doing.  The mother of one of them also was curious.   No pix from yesterday, but here is what sits on my bench tonight as of quitting time.  The LEFT flap is coming along nicely.  I have riveted the complete spar and rib assembly together and put on the nose skins and the top skin.  As you can see in this photo, I have just started to rivet on the bottom skin on the special work table that I built for flap and aileron construction. 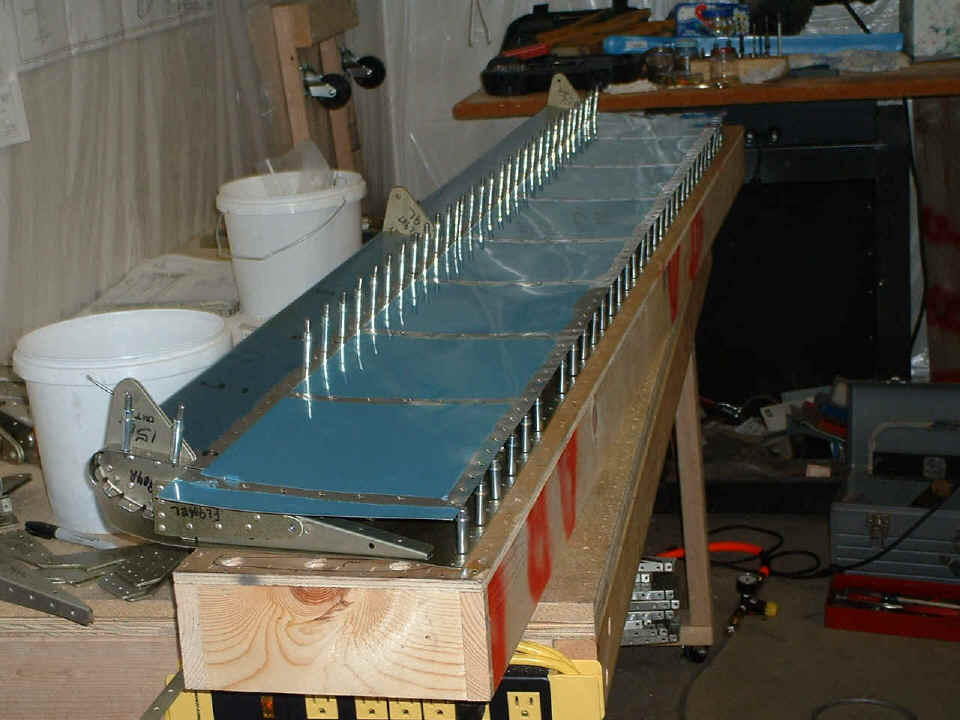 As you can see above, the flap is upside down on the assembly table.  I have clecoed the trailing edge of the TOP skin to the table into the very holes that were used during the initial assembly a few weeks ago.  The other clecos along the spar hold the bottom skin and nose skins in place as I rivet them all to the spar.  I have to reach inside with a small steel "bucking bar" to form the shop head of the rivets as I place the rivet gun on the side you see here.  I quit work after getting eight rivets in place.  Only the flap spar is riveted this way.  The remaining ribs will be riveted using blind "pop" rivets.  The trailing edge will be back-riveted the same way the elevators and rudder were done in the empennage kit.

NEW on November 16, 2005:  This work table is built from the long wing spar shipping box I received from Van's.  I took the original shipping box apart and cut it down to the size I needed.  The box was taller when it came from Van's.  After cutting one of the long side boards to the length needed for this building box, I ripped it in half to make it the height you see here.   Each of the lengthwise halves became one side and end of this perfectly straight and square building box for the flaps and ailerons.  You can see in the photo above that it is longer than the flaps, but not wider.  It only has to be wide enough to allow any clecos to have "passage holes" through the 1/4" lid which was on the original wing spar box.  Pay attention to the cleco hole pattern below.   Notice that TWO sets of cleco holes exist at most of the locations, but there are three places where only ONE set of holes were needed.  Counting from the aileron end of the flaps, those three rib locations are the first, fourth, and sixth rib locations.  Also, note that I almost chose a placement of the holes that could have fallen on the board at one end of the box.   That is certainly NOT what you want to happen.    So be sure to place the first rib cleco clearance holes about 1.75 inches from the end of the box.  The length of the box is 88 and 7/16th inches.  I don't remember why it came out that length since 90 inches would work just as well.  Shorter than 88 inches would not work as you can see the cleco passage holes are getting close to the ends. 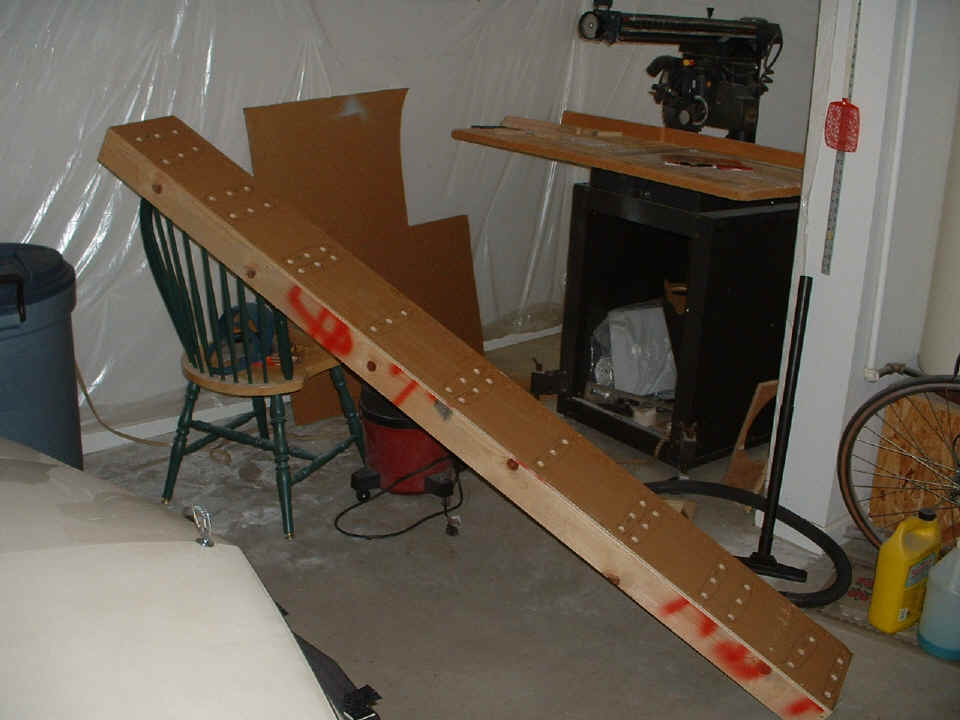 Speaking of getting close to the ends, here is what I am talking about.   The holes at the end are very close to the board across the end.  Also notice that the second set of holes near the end of the box are not square to the edge of the box like all the others.  Those offset holes line up with the inboard flap rib which are parallel to the side of the fuselage.  You will learn all about that later in the construction of your RV-9/9A. 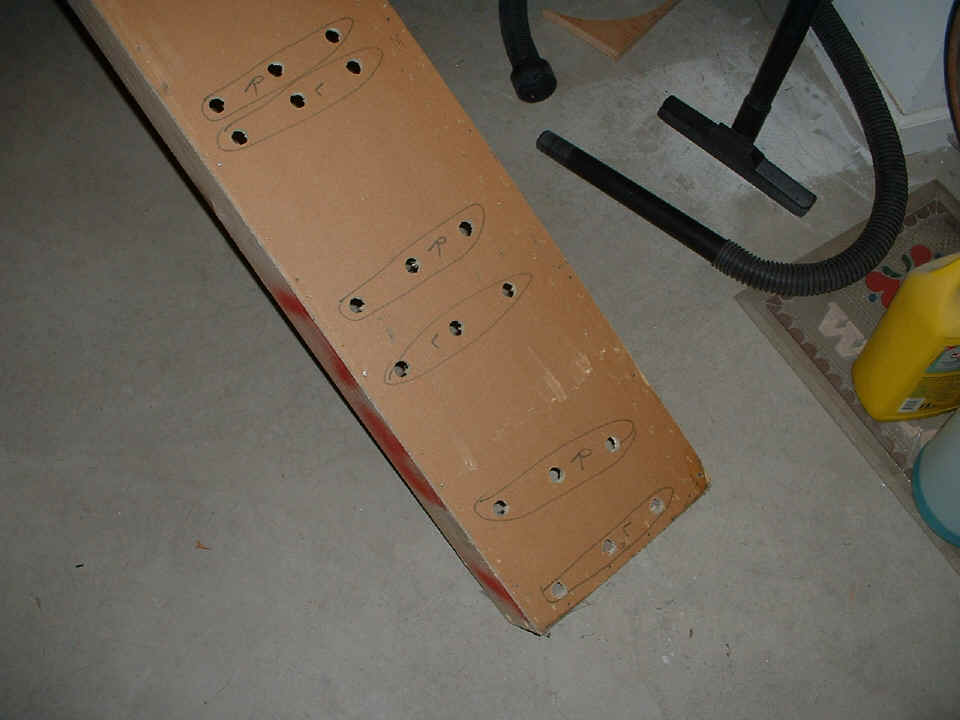 This close up shows the large cleco holes and the many holes from the trailing edges of both ailerons and flaps.  The cleco holes were only used during flap construction.  You can also see the heads of the one-inch wire nails I used to secure the 1/4" lid to the boards while building the box for the ailerons and flaps.   The cleco positions were in every other hole in the flap ribs.  The holes were drilled with a flat-sided 5/8-inch wood bit.  The holes are clean on the top and ragged on the bottom (inside the box).  There are numerous #40 drill bit holes from the trailing edges of the flaps and ailerons to cleco them solidly to the box during the construction process. 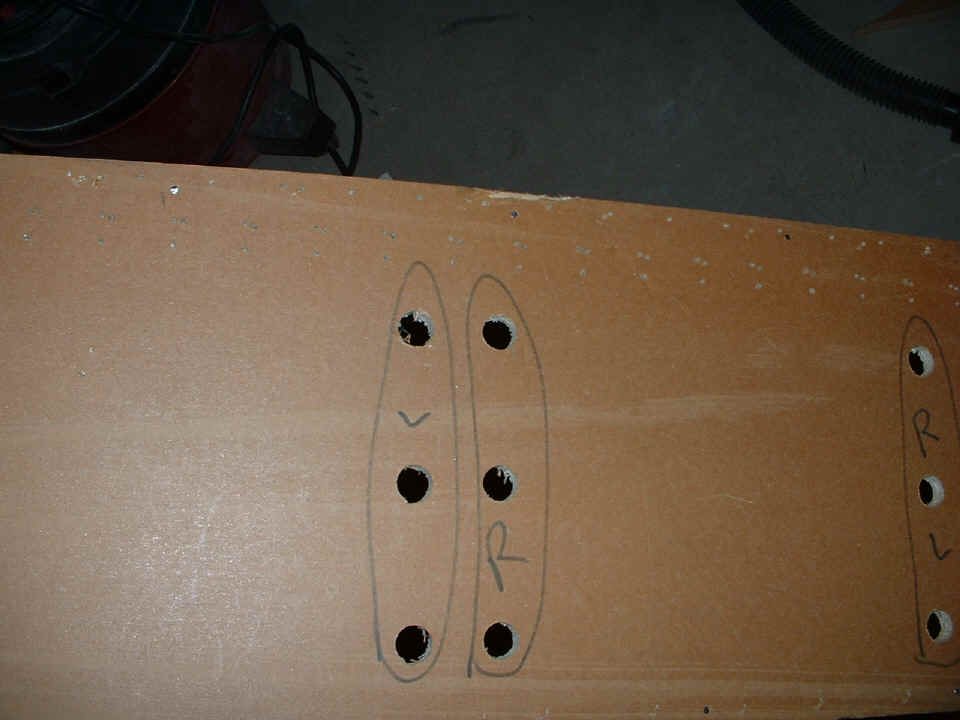 Now, where to place the cleco holes?  Use a small combination square to get the holes in a line perpendicular to the sides of the box.  Take all the measurements from the flap skins to be sure how far apart the clearance holes need to be drilled in both directions along the surface of the box.  As you can see, only two sets of holes will be used for both the right and left flaps.  All the other ribs will require additional holes to pass the clecos into the box while the surfaces of the flaps sit flush and square on the box top.

May 30, 2003:  I finished riveting the LEFT flap and hung it on the wing to check the fit of the hinges again.  All is still fine with that alignment.  Look Ma, no clecos!  I spent a good part of the day doing my 5th BFR at Collegedale airport.  I am good to go flying for another two years. 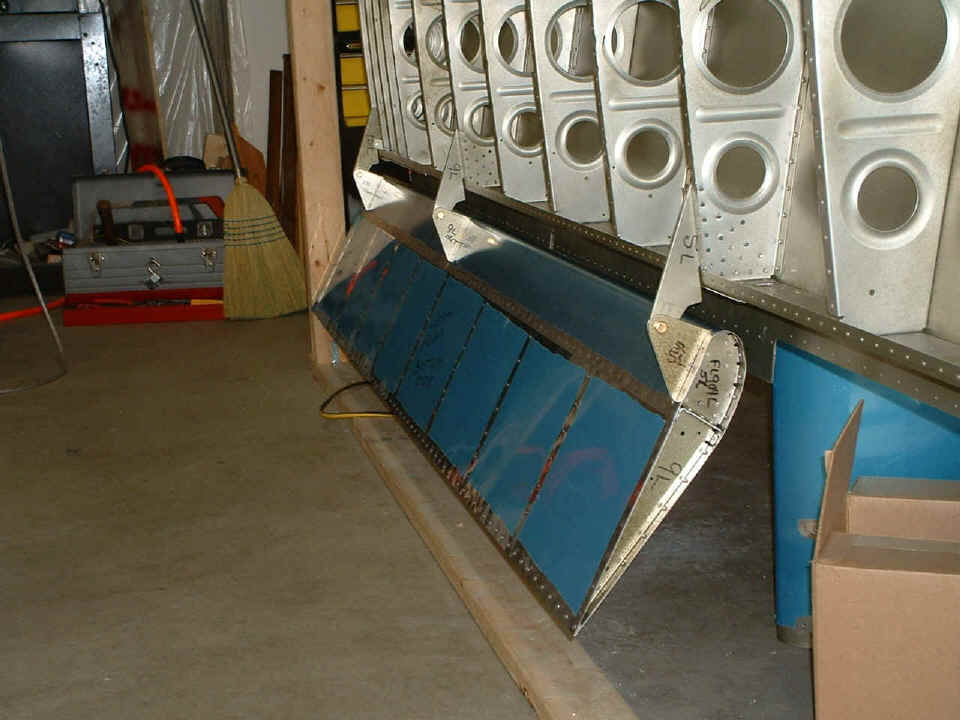 June 6, 2003: The LEFT aileron is completed and installed as you can see.  I started on the RIGHT FLAP final assembly tonight and hope to complete it tomorrow (a Saturday) and work on sealing up the LEFT fuel tank, which I have been putting off for a while.  I went flying again last Saturday with two friends and then to visit my ailing mom on Sunday, June 1st.  She is in failing health and I have spent some time with her this past week.  It was good therapy for me to get back on my project again. 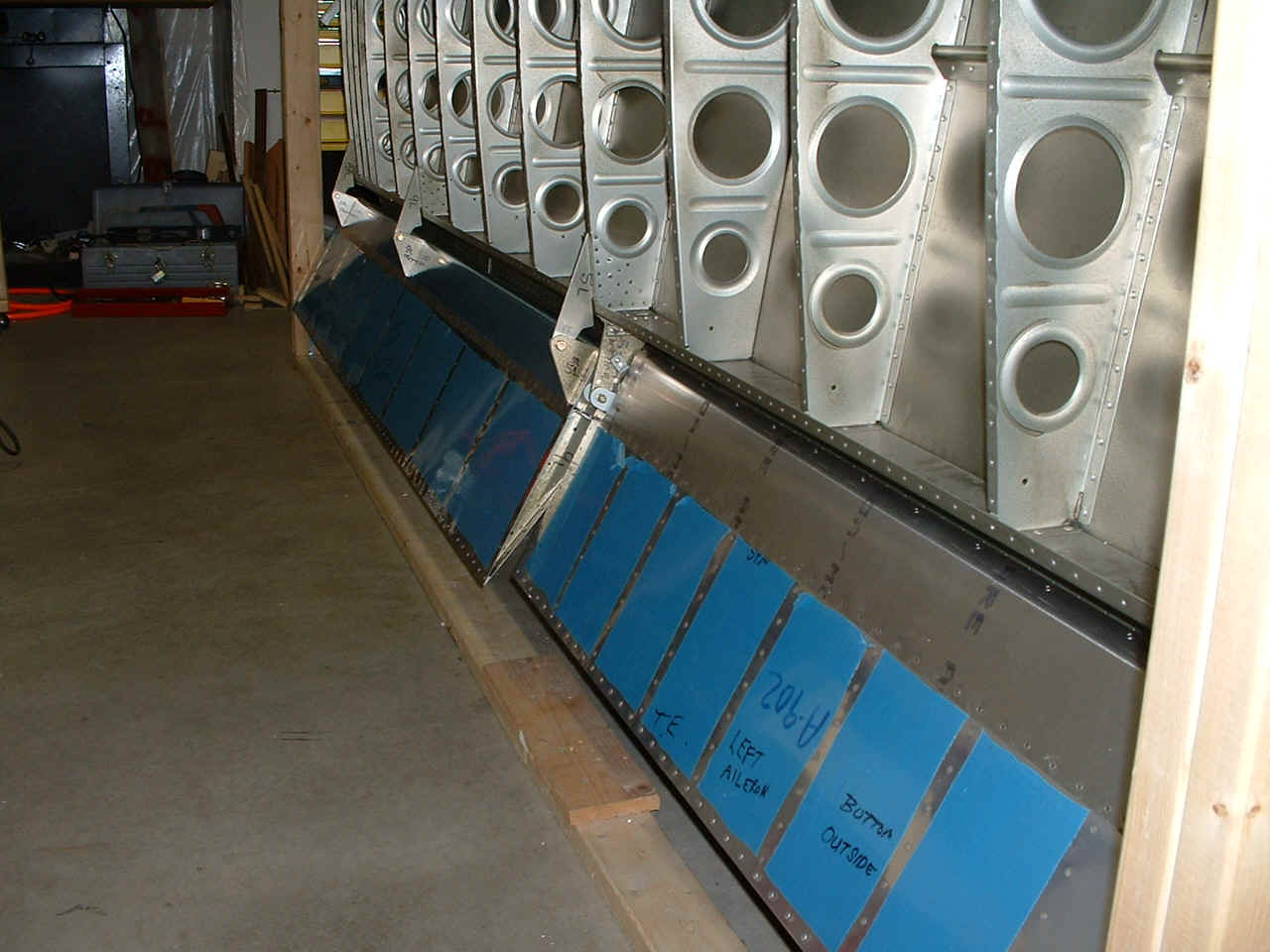 June 10, 2003:  I have finished the aileron and flap for the RIGHT wing and set them aside.  I have returned to doing fuel tank chores.  The RIGHT fuel tank now has all its ribs riveted in place.  I have to finish sealing the ribs tomorrow along the shop heads of the rivets and the seams of the ribs to the tank skin.  There are two nose rib reinforcing plates to be installed with the outside ribs of the tank, which will probably take place tomorrow.  I also took some time to work on the aileron push rods tonight after putting the fuel tank aside to let the sealant start curing.  Here are the pix: 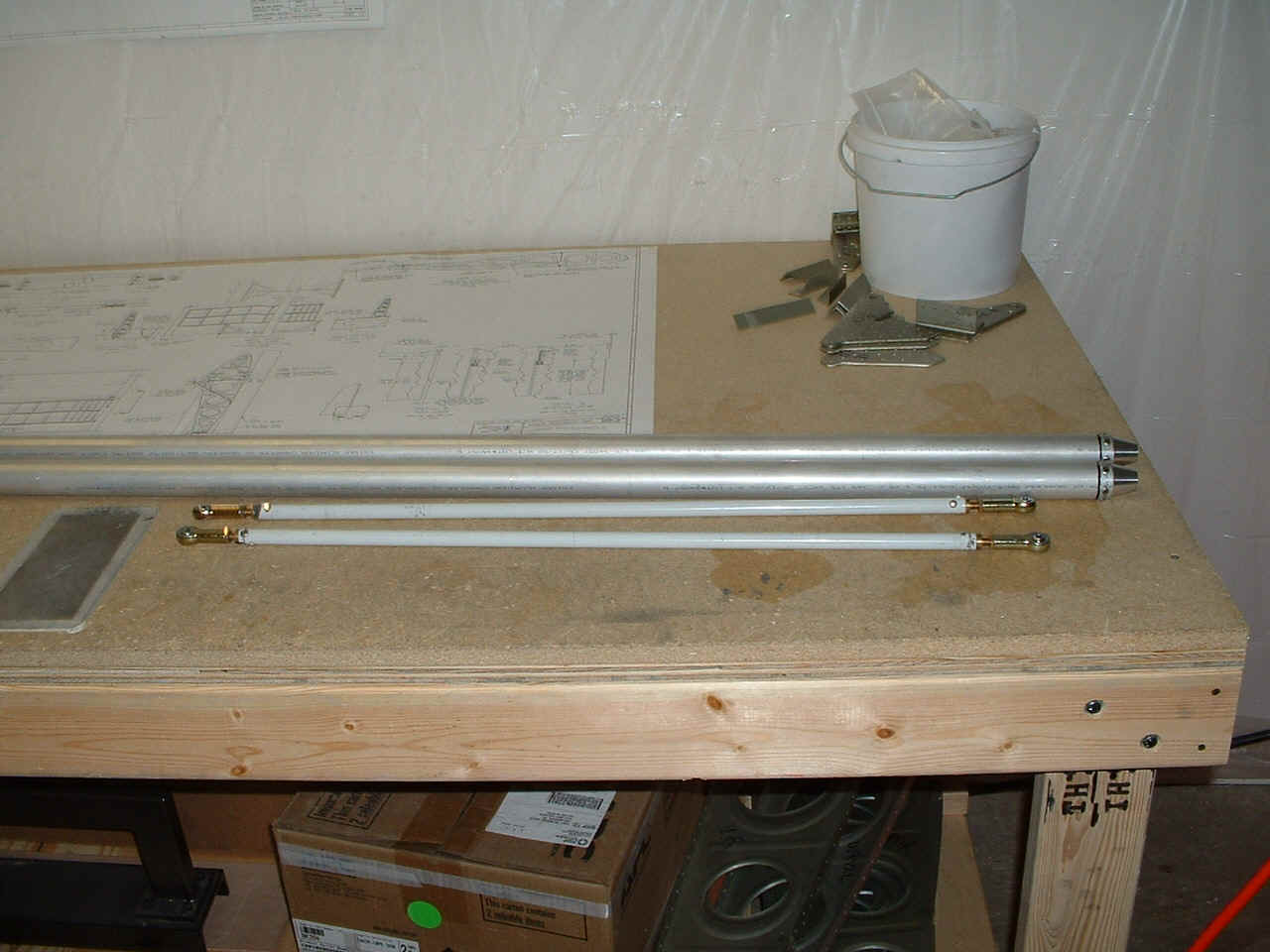 My total time working on the RV-9A empennage and wing kits now stands at 463.25 hours. 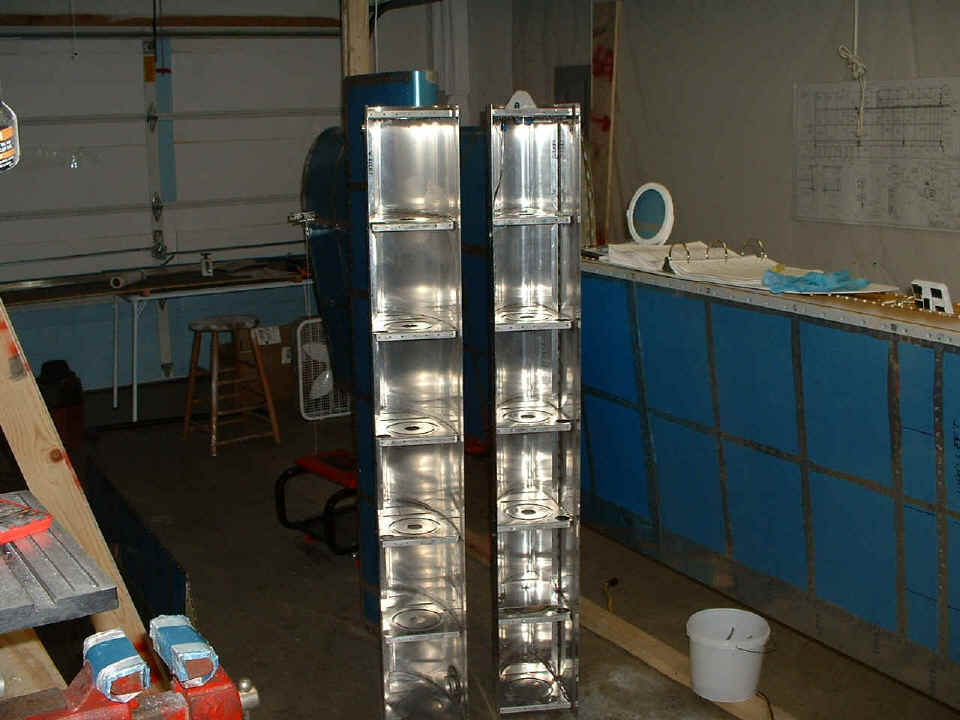 As you can see, the tank on the RIGHT in this picture is the LEFT fuel tank and it is still waiting for me to install the rear baffle plate.  I thought I would leave it off until I get the second tank completed to the same stage of construction.  The tank on the left still needs the fuel sensor plates, vent line, and fuel pickup tube installed.  When the LEFT fuel tank is completed, it goes on the wing in this picture, then the wing goes into the storage saddle to make way for the final assembly of the RIGHT wing on the construction jig.  That should go very quickly since the parts are all match-drilled, primed and ready for me to start riveting.