July 25, 2010: There are several "reviewing stands" available for anyone who wants to take photos of the flight line.  The one that is nearest the International EAA sign is where we each had a chance to take some "panoramic" photos of the area.  What is noteworthy in this picture is all the airplanes parked to the right side of the taxiway on the right half of the photo.   Due to wet and soggy grounds in the "North 40" camping and parking area alongside runway 9/27, these airplanes are parked here temporarily. 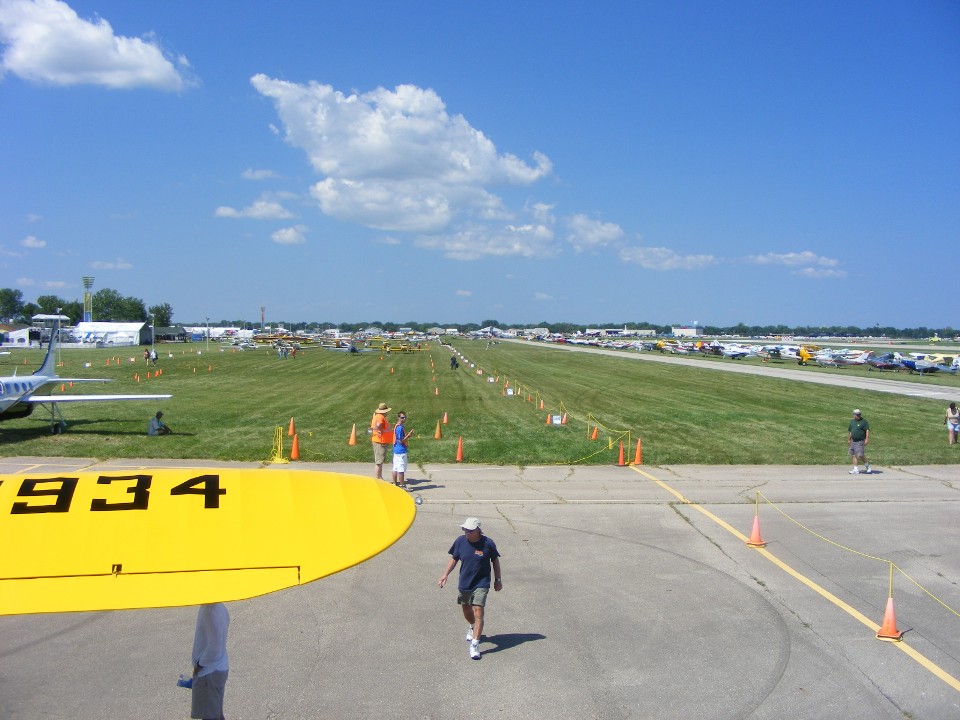 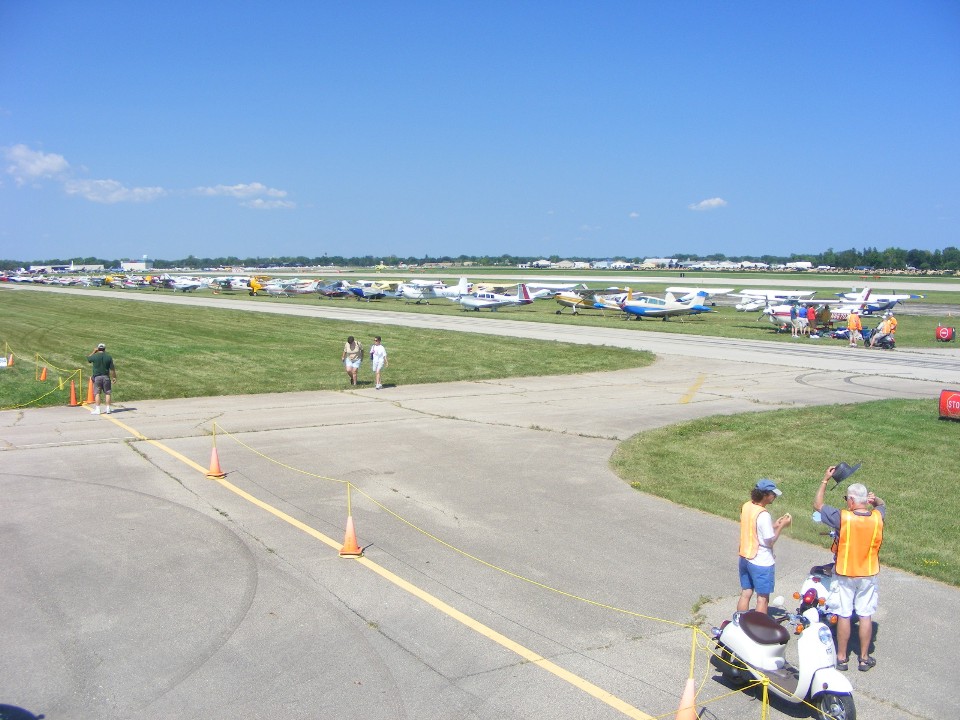 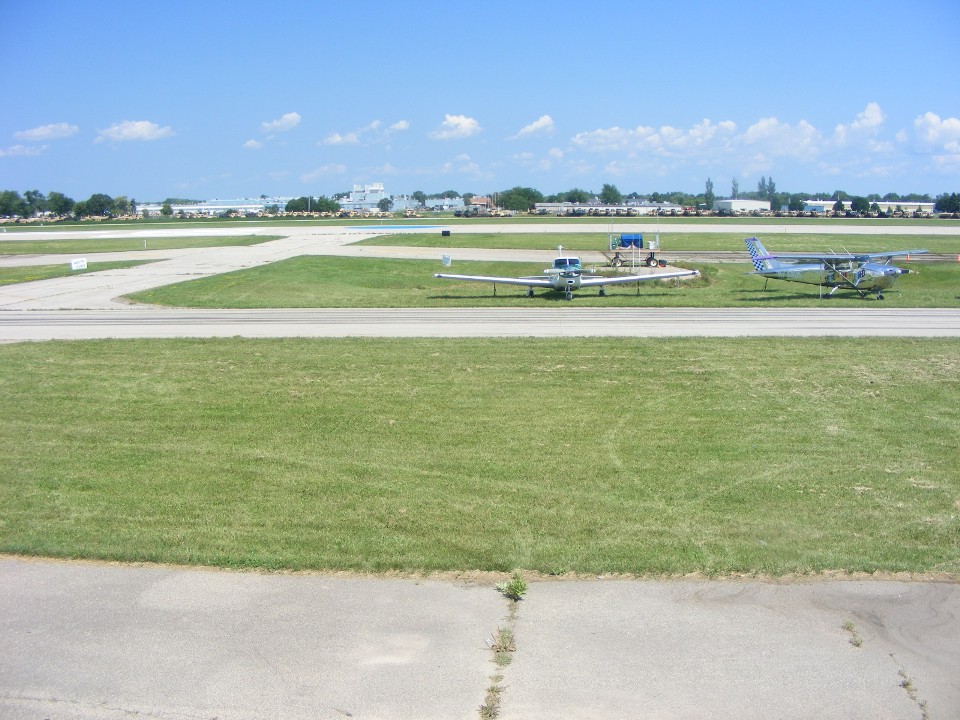 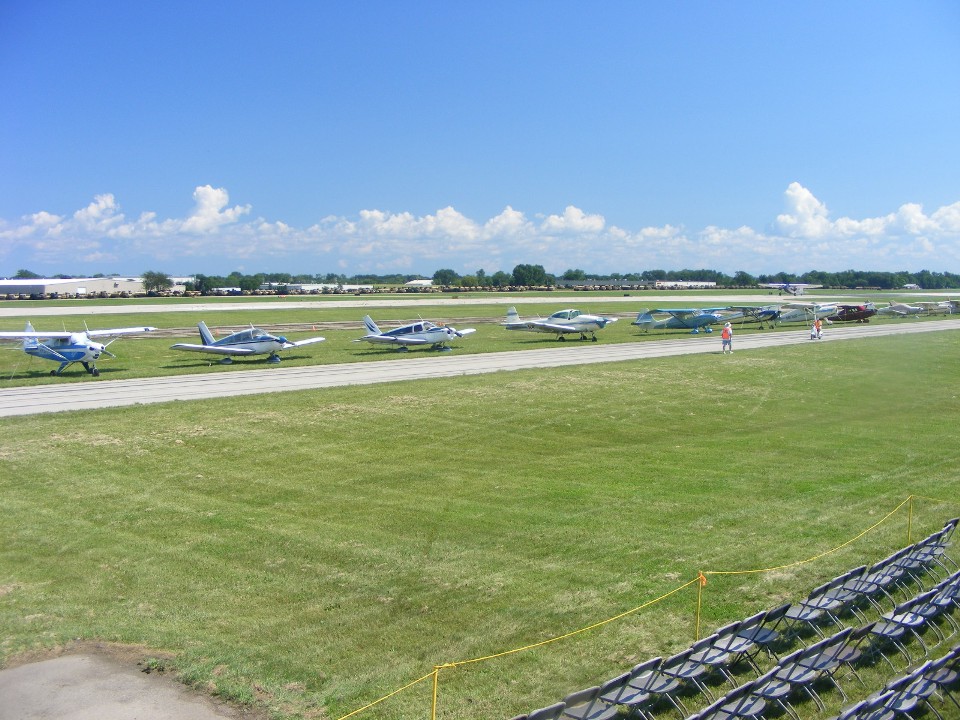 A Ford Tri-motor airplane from the late 1920's has just landed and turned on to the taxiway toward show center.  Notice how far the parked airplanes extend to the south alongside runway 18/36. 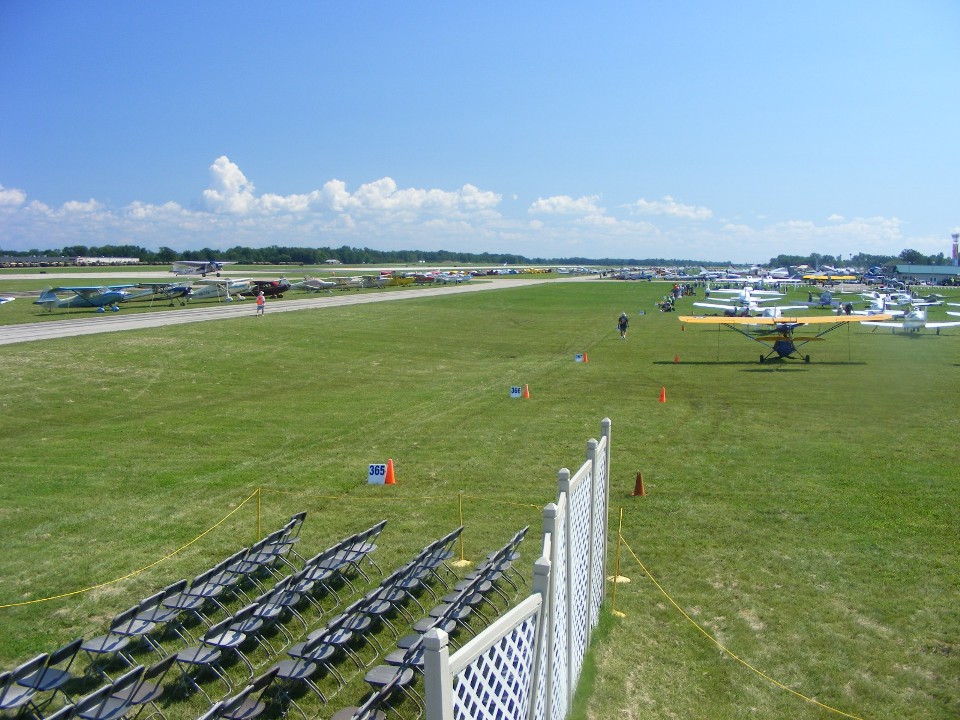 This photo looking toward AeroShell Square shows how the muddy conditions were in many areas of the airport and why we were delayed in our arrival here from Saturday afternoon, until just after 12 noon today. 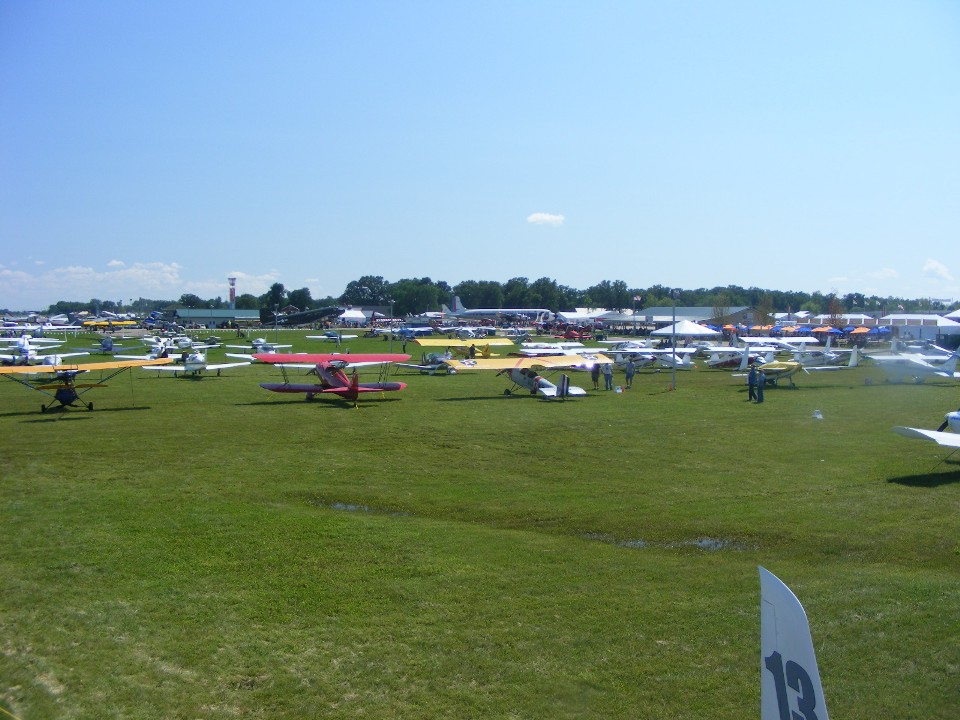 Layout of the exhibit grounds have been changed this year.  More large exhibitor tents were added in the new areas.  That spot in the sky above the Honda tent is a Bell model-47 helicopter giving sight-seeing rides from the grass field Pioneer Airport near the EAA Museum.  If you have ever seen the opening credits for the television show M*A*S*H, you have seen the Bell 47 chopper. 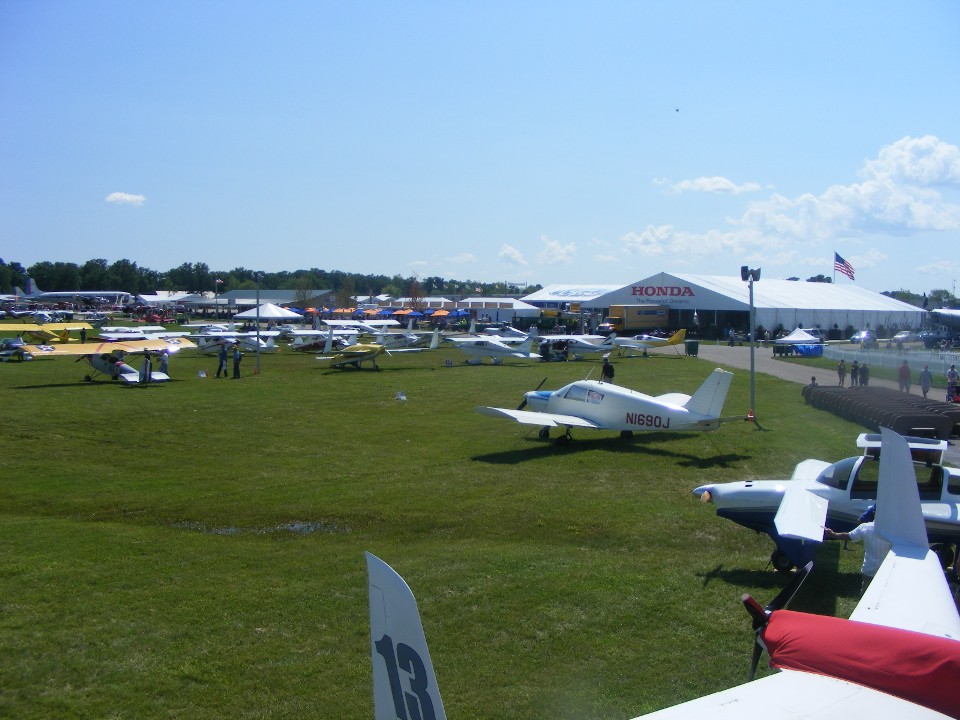 This photo includes the new control tower.  That is Edward with his water bottle at the right side of this photograph taking his photos from the viewing stand vantage point. 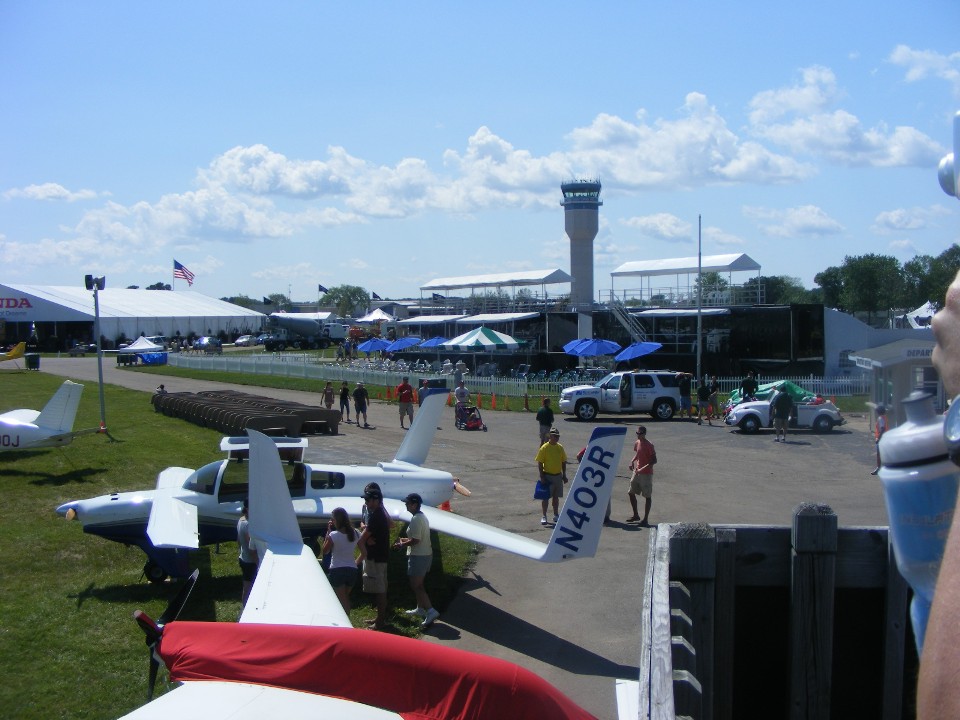 During the daily airshows, the "Air Boss" controls all airport takeoff and landings from this building.  He talks to the airshow performers providing the aerial entertainment and cues the next performer when each act is finished.   There is no curtain on this open air stage.  There is the Bell 47 helicopter again in the upper right corner of this photograph flying from left to right.  This time, the angle is such that you can see the tail boom, which is metal tubing with aluminum skin over the structure.  A large Plexiglas bubble canopy covers the pilot and passenger seats. 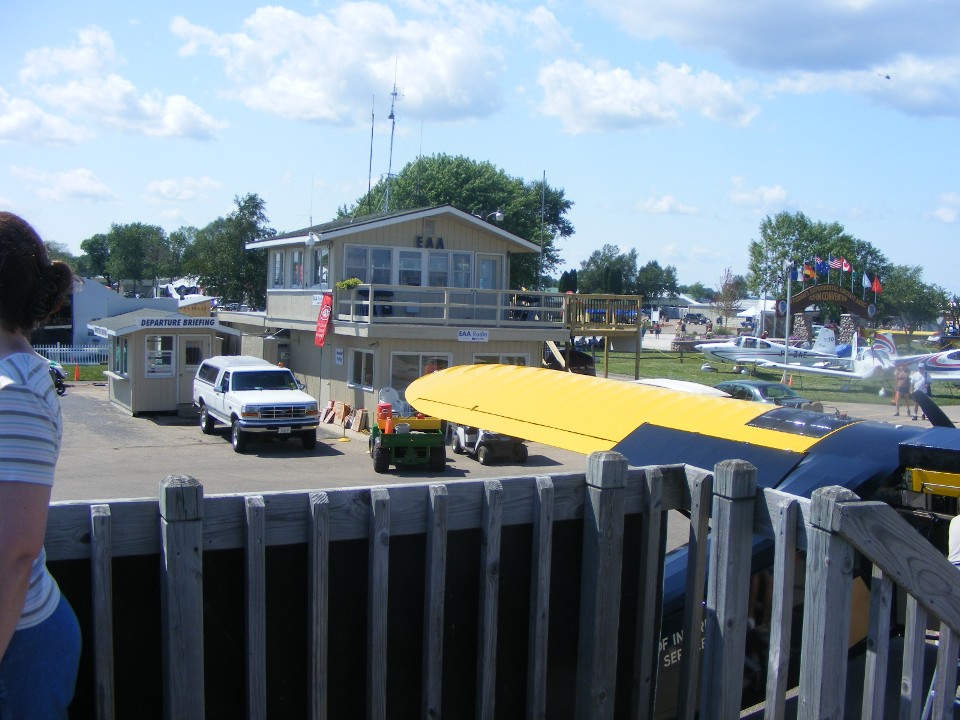 Workers are preparing to fold the wings back on this airplane by the reviewing stand.  The flaps and wing control linkages have to be disconnected and the flaps folded up on top of the wings before they can be swept backwards and stowed above the aft portion of the fuselage. 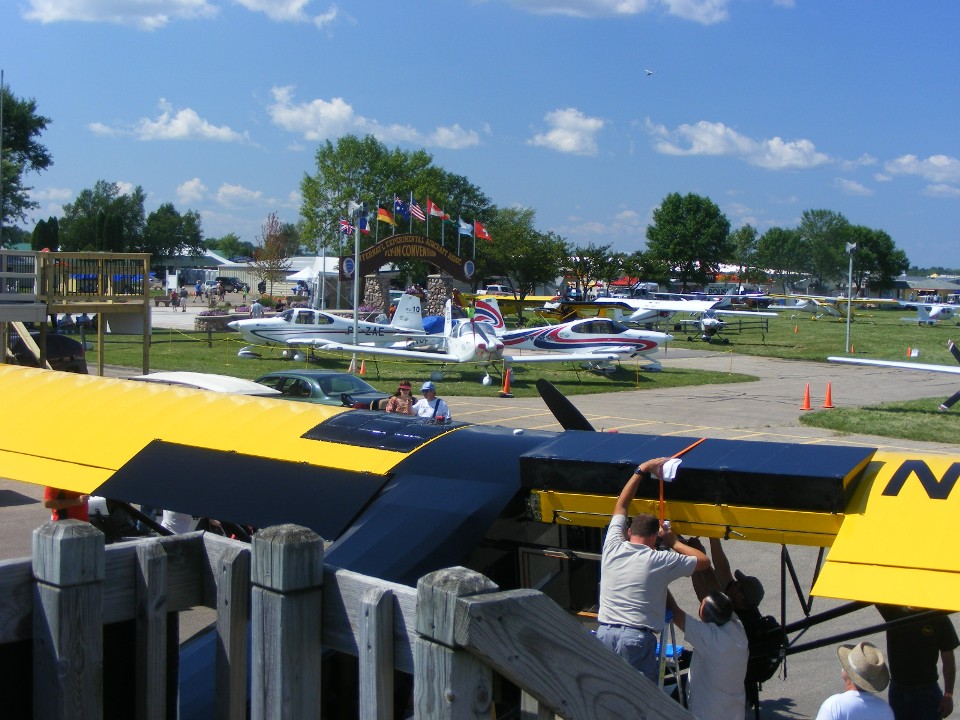 The turboprop Aerostar (Speedstar) is seen in this photo.  Homebuilder's Headquarters is that small building with the Green Roof seen beyond the white tent seen beyond the Speedstar. 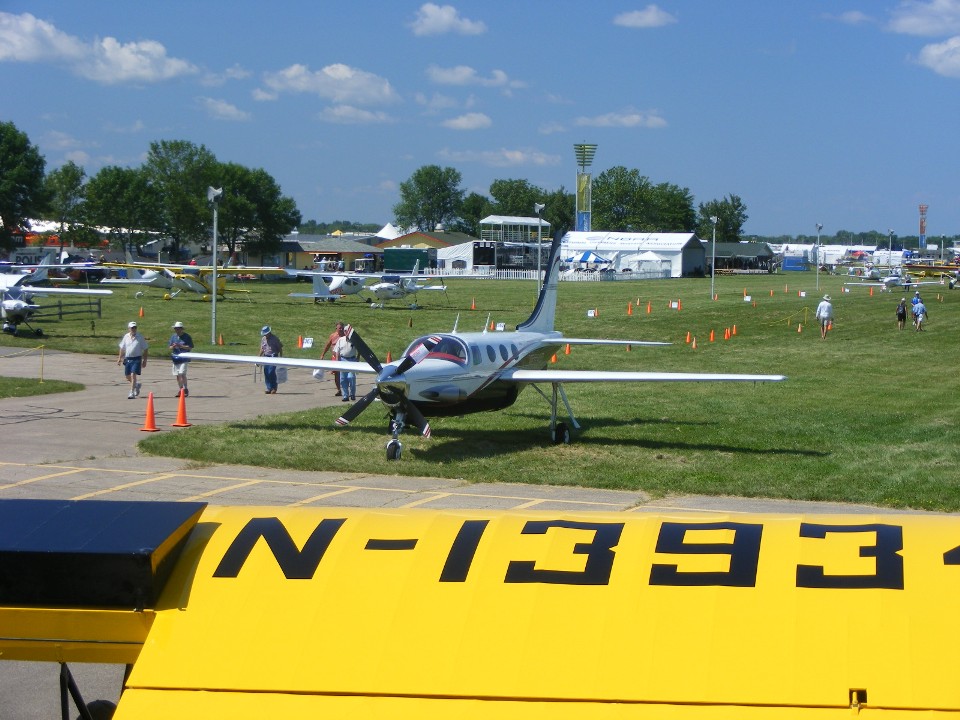 I don't usually have folks taking photos of me on a trip like this one.   Today, here with my son, it is OK for sure, on his first visit to Oshkosh and the big show known as AirVenture. 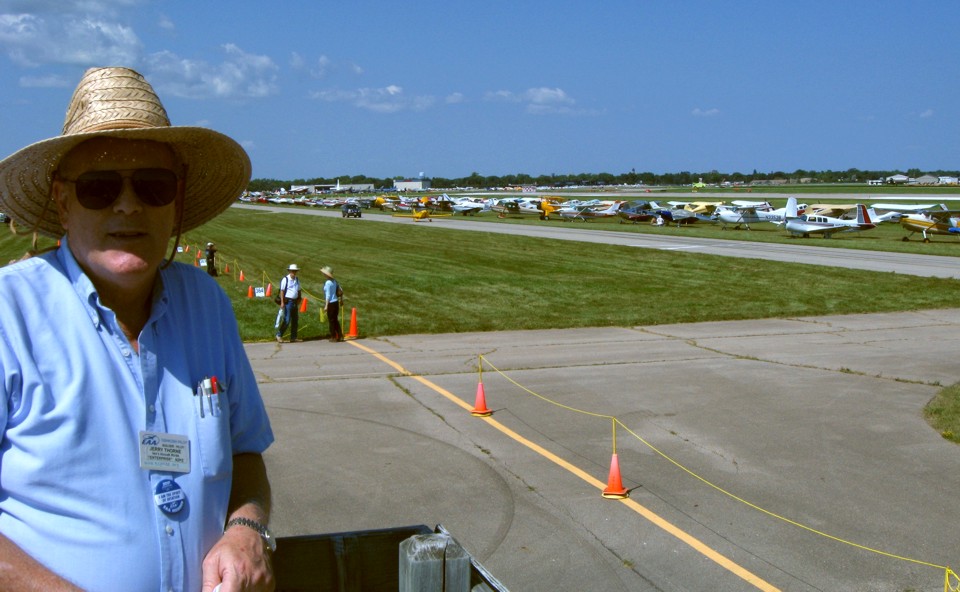