June 6, 2022:  Monday - We headed out to get our usual Wendy's drive through take-out breakfast items.

This image shows a mid-day image when there are a large number of Wendy's customers.  We got here early and were parked in the shade of the green building on the East side of Wendy's parking lot with no other cars.

We went out the back exit from Wendy's and turned right on Washington state route 4 toward an interstate route 5 junction.

This intersection is where state route 4 turns northeast for a short distance then turns East to cross the Cowlitz River bridge.  Turning left with WA route 4 was taking us to the other bridge that crosses the Cowlitz River going into Kelso.

Here is the view through the truss bridge from route 4 looking south at the Allen Street Bridge.

Pacific Avenue is the first north/south cross street after the WA route 4 bridge.  My GPS is pointing NORTH from this intersection to use Pacific Avenue to get to the next interchange for I-5 northbound.  Turning LEFT here goes through a residential area on the way to the I-5 connection north of the one that is near the motel where we stayed last night.

We are getting on I-5 northbound at exit 40 until we get to a route to Mount Saint Helens going East.

It turns out the next exit north is exit 49 with route 504 going toward Mount Saint Helens.

A short 9-mile ride north on I-5 takes us to the southern route from I-5 Exit 49 to Mount Saint Helens.  There is a return route that meets I-5 at exit 63 that I have used in the past.

This A-Frame house was partially buried during the 1980 eruption of Mt. St. Helens Volcano.  It is located at 9718 Spirit Lake Highway, Washington route 504.   The "A-frame house was finished right before the eruption, but never lived in by anyone.

This is a photo I took with my old digital camera and put on my web site in September 2014.  This house was buried with about four feet of MUD inside and dug out by hand to show the original floor inside FOUR FEET below he new ground level after the eruption and mud slide down the river that is behind this house. Toutle, Washington  Outside this souvenir shop is a statue of Bigfoot composed of volcanic ash, and plenty more to see inside. 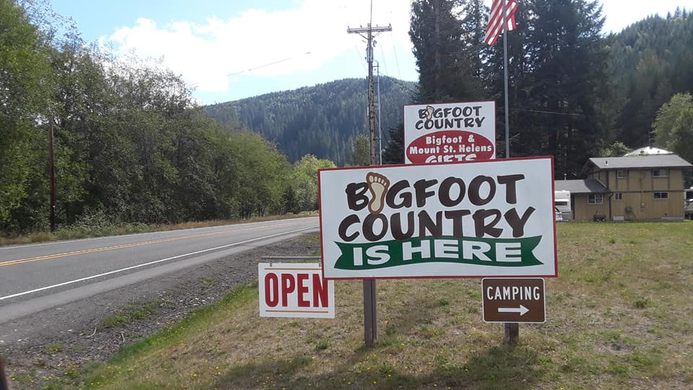 Here is an Aerial View of the Mount Saint Helens Forest Learning Center located about 34 miles from the town of Castle Rock and Interstate 5.

This Google Earth ground view is from the year 2007.  We paused here for a rest stop and some tourist literature about Mount Saint Helens in our 2022 vacation trip.  This is the building seen in the aerial image above.  The 2007 Google Earth image does not have the higher resolution of the new Google Earth images from 2019 and later.

With some luck with Google Earth, here are the images I could not get with my camera during my earlier visits here.  The top of the volcanic peak was always obscured by clouds.  The top of the mountain was 1,200 feet higher before the 1980 eruption.

I have been to Mount Saint Helens three times and have never seen the top of the mountain with my eyes or a camera due to low cloud cover at the peak.  With this image from Google Earth, I managed to see the top of Mount Saint Helens.  I did see it from an airliner that departed Seattle Tacoma airport heading back to Florida a number of years ago after a business trip.  I only saw the top of the mountain poking through the clouds from that airliner.

This is the bus stop at the south end of the parking lot where folks can walk up to the main view point for Mount Saint Helens.

This is the main parking lot near the main view point at Mount Saint Helens.

This is the visitor building at the main view point for Mount Saint Helens.  They show documentary movies inside.

Here is Linda's photo of the billboard in the viewing area showing the mountain before and after the 1980 eruption.  About 1,200 feet were blown away from the top of the volcano.

This image shows how plant life has returned.  The animals have also come back to this area.  The day of the eruption, everything was destroyed on the north side of the volcano.  Mountains had their trees laid flat by the blast wave.  The trees rooted behind the mountain tops had the tops of trees that stood tall enough to be caught in the blast were sheared off.

Here is my similar view looking down at the lake in front of Mount Saint Helens.  All the trees that were blown away in the blast were carried away toward the Pacific Ocean by the landslides.  One of news videos taken after the eruption showed some trees that passed under the Interstate 5 bridge and did not destroy that bridge.

All the Mount Saint Helens photos above were taken from the Johnston Ridge Observatory.  The image below shows the devastation on the side of the mountains facing the volcano.  All the trees in the "shadow" of those mountains have their old trees intact.  The BLUE lines are the GPS ground tracks of Google Earth camera vehicles that have come this way.  The BLUE triangle at the observatory show the turn around track for the Google vehicle.  All the BLUE dots are locations of photographers who have sent in their 360-degree images to Google Earth for viewing by the public.  You can see those photos only while logged on to Google Earth.

Here is the sign to put us on the correct route at the next intersection with a right turn for our next attraction, the town of Toledo, Washington.  The image below from Google Earth was captured in June 2016.

On the way back to Interstate 5, I used Washington route 505 to see the small town of Toledo, Washington.  This Google Earth image from 2007 has poor resolution, making it blurry.

When you compare the 2007 image above with this 2018 image below, the resolution is better for sure.

The US Post Office is near the center of town and confirms we have not substituted different photos.

This is the left side of a large mural visible to folks entering the town of Toledo from the west a.k.a. north side of town.

Showing the LEFT end of the mural reveals how it is wrapped around part of the building as seen below.

This image shows a large part of the mural on a FLAT wall with excellent 3D rendering.  The Wink Theater in my hometown of Dalton, Georgia had the ticket booth between two sets of double doors painted here as part of the mural.

The motorcycle cop reminds drivers to slow down to the speed limit through the town of Toledo, Washington.

It is time to leave Toledo, Washington via the north side of town on route 505,

We followed route 505 to the north and then west to Interstate 5 where we head SOUTH down toward Portland, Oregon before going EAST for our hotel tonight.  This Shell station was our comfort rest stop before we continued our trip today.