July 28, 2019: It is SUNDAY after lunch and a visit with Linda's daughter in Atlanta.  Now we get to see what traffic problems lay ahead of us today.  This aerial image looking south shows the crossing and junctions of three interstate highways just south of the State Capitol and near where the first Atlanta Braves Stadium was located.  A new stadium was built to accommodate the 1996 Olympic Games.  The old stadium location is painted on one of the parking lots for the new stadium.  I-75 and I-85 joined north of the main business district and I-20 cuts across the middle of the city going East and West and connects to I-75 and I-85 as seen below. 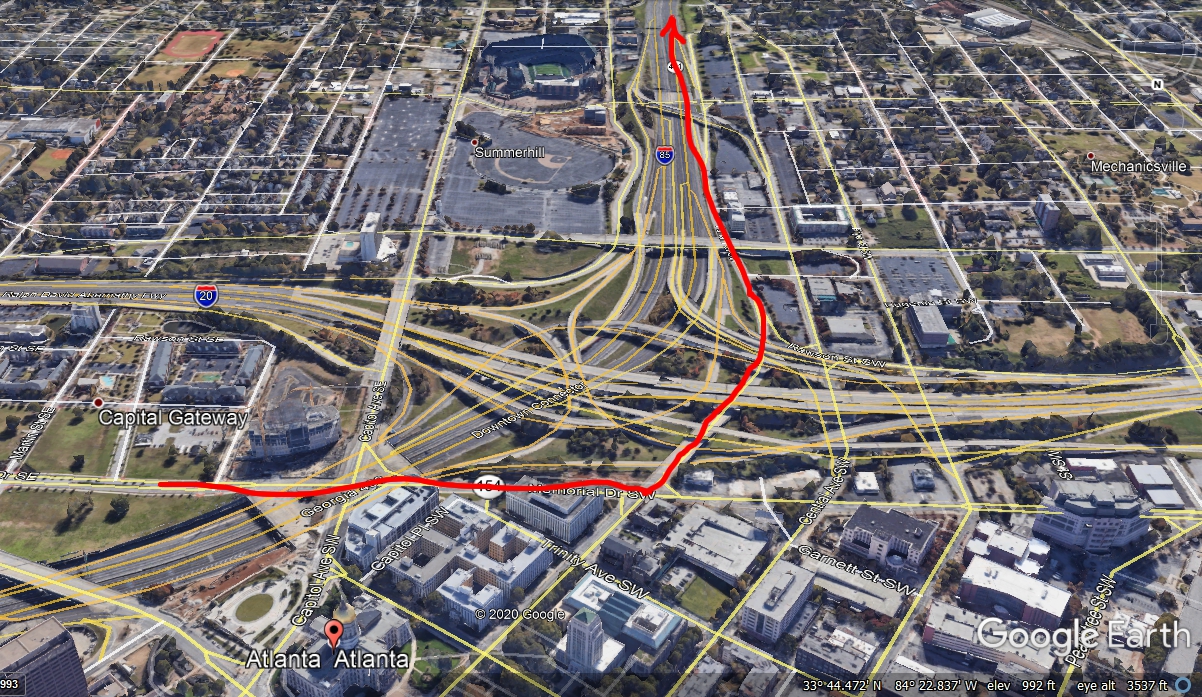 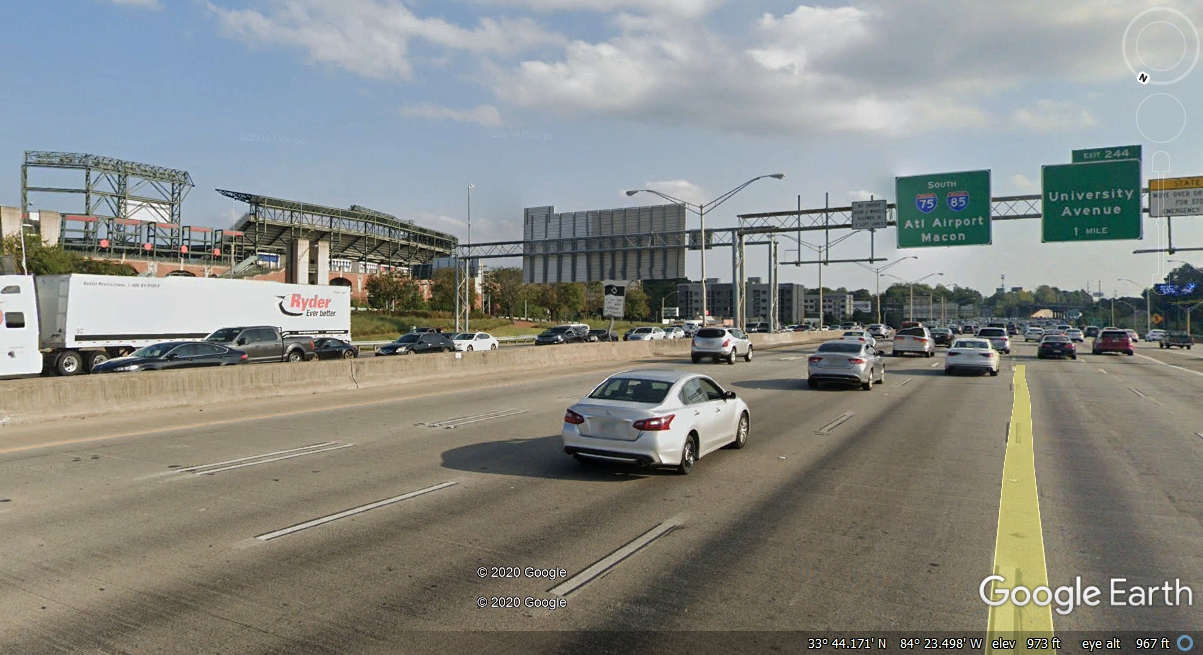 Here is another aerial view of the south side of Atlanta and the world's busiest airport.  There are FIVE parallel runways with their adjacent taxiways.  There are SIX terminal buildings  connected by underground subway trains.  The intersection where I-75 and I-85 split to pass by the airport on the East and West sides is evident in the bottom of this image.  That 63-mile loop around the city known as I-285 is seen at the right side of the image without a route number.  I-85 exits southwest near the top right corner of the image at the same intersection where I-285 turns East and passes on the south side of the airport.  When the southernmost runway was built, the runway and the associated taxiway were built on OVERPASSES across the interstate highway.  Over at the left of this image you can see a RED and BLUE interstate shield covered with a state highway symbol 407, which is the state of Georgia route number for Interstate 285.  We are following I-75 down past the East side of the Atlanta Airport near the little town of Mountain View. 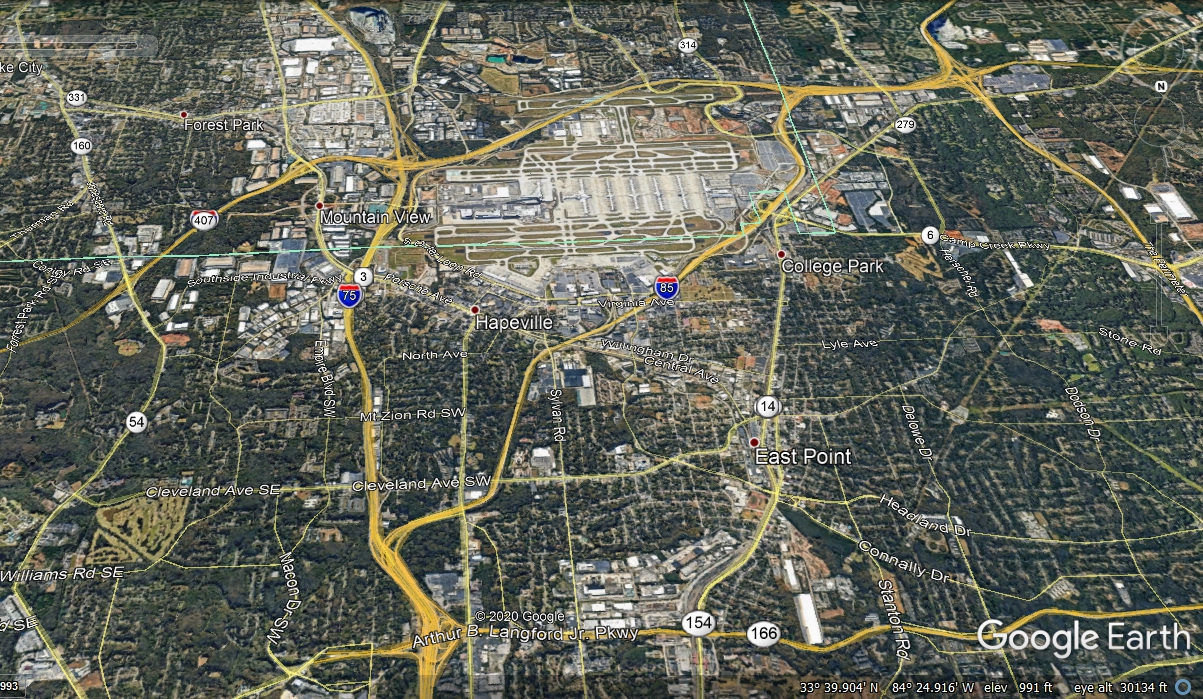 The southbound traffic on I-75 passes this signage for the old US 41 and US 19 highways going south toward Griffin, Georgia beyond I-285.  The westbound I-285 route is another way to the airport terminal. 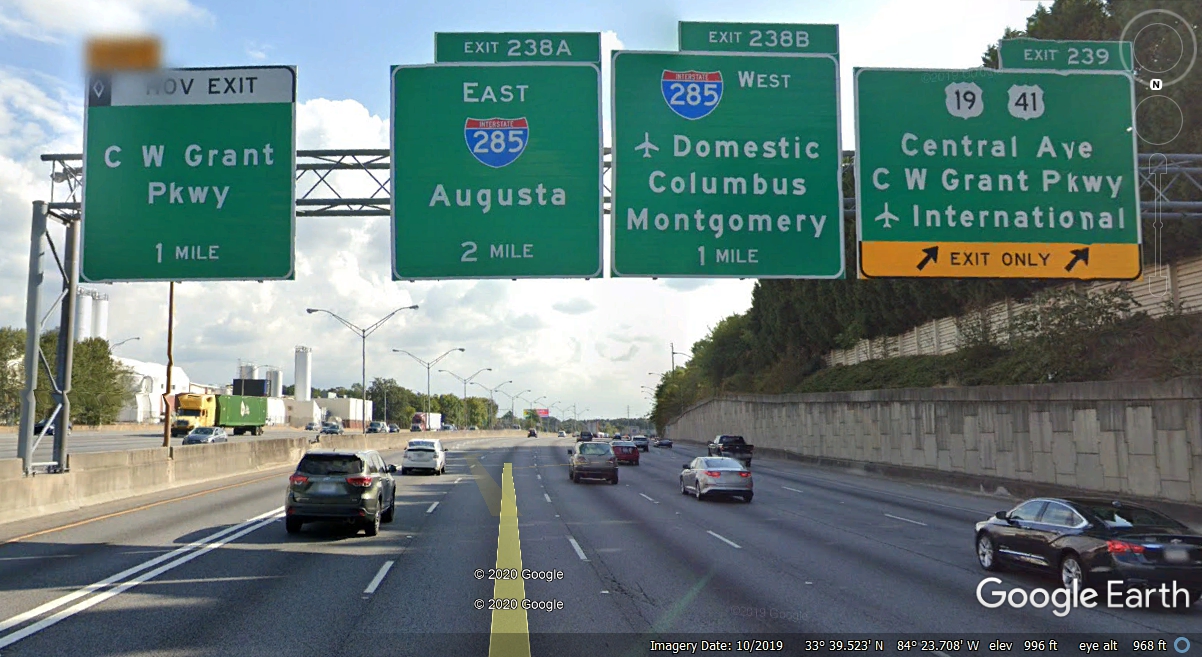 Back in the 1960's there was a Ford Motor Company assembly plant located here just below the US 41 and US 19 routes adjacent to the NEW I-75.  The airport was much smaller then with the only passenger terminal on the north side of the runways at that time. 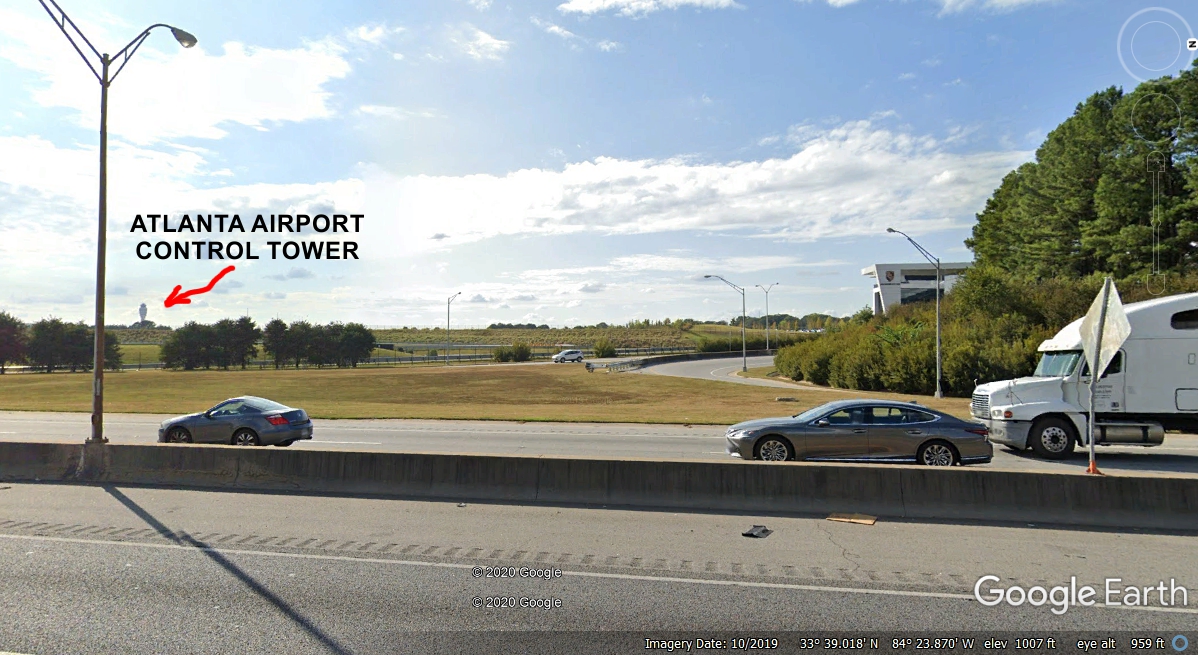 This is an exit I think about every time I pass this way.  Staying on I-75 for another 7 miles could put you into a big traffic jam.  US 41 and US 19 is a local four-lane highway with cross roads and traffic lights for about 10 miles that can be slow.  After that, the four-lane highway goes 42 miles from this exit to the south side of the town of Barnesville, Georgia.  Beyond that point US 341 continues down to cross I-75 at the town of Perry, Georgia.  It is a more scenic route in some areas, and there are a couple of good restaurants in the first 10 miles south of here on US 41. 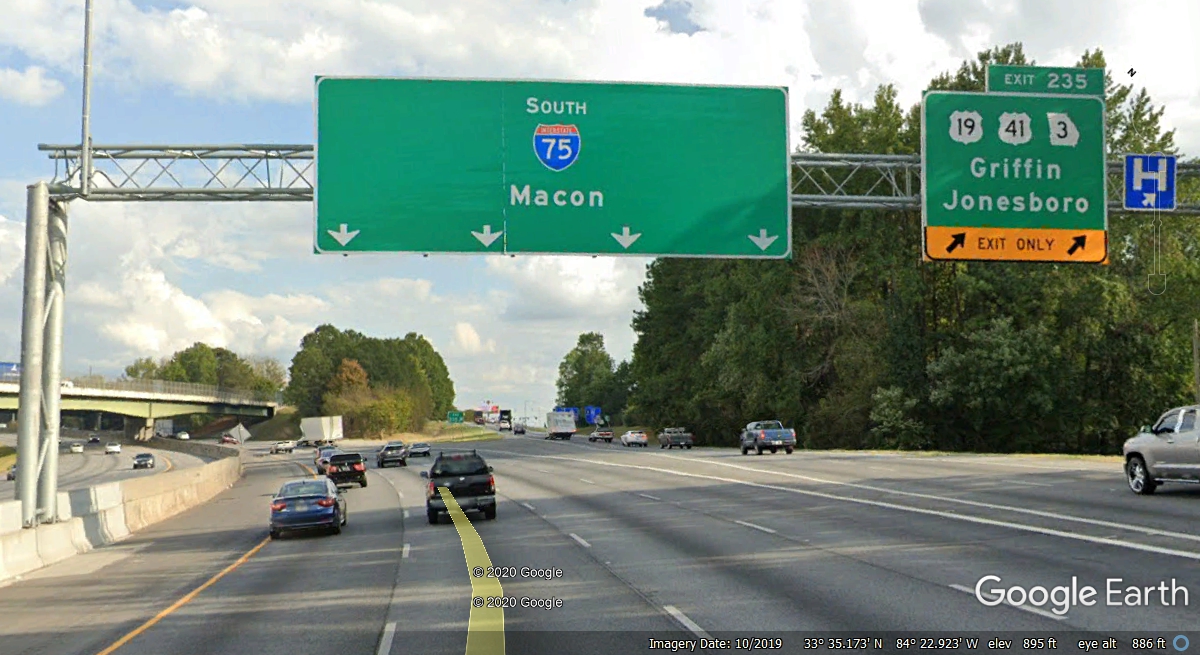 My usual concern with heavy traffic came true on I-75 as we reached the connection of I-675 to I-75 southeast of Atlanta.  We got into slow traffic just before the merge and for about five miles south of there.  There are truck terminals in the southeast parts of Atlanta.  Trucks from I-285 from the East side of the city are merging here from FIVE lanes down to FOUR lanes.  I rarely see traffic flowing easily here unless it is late at night. 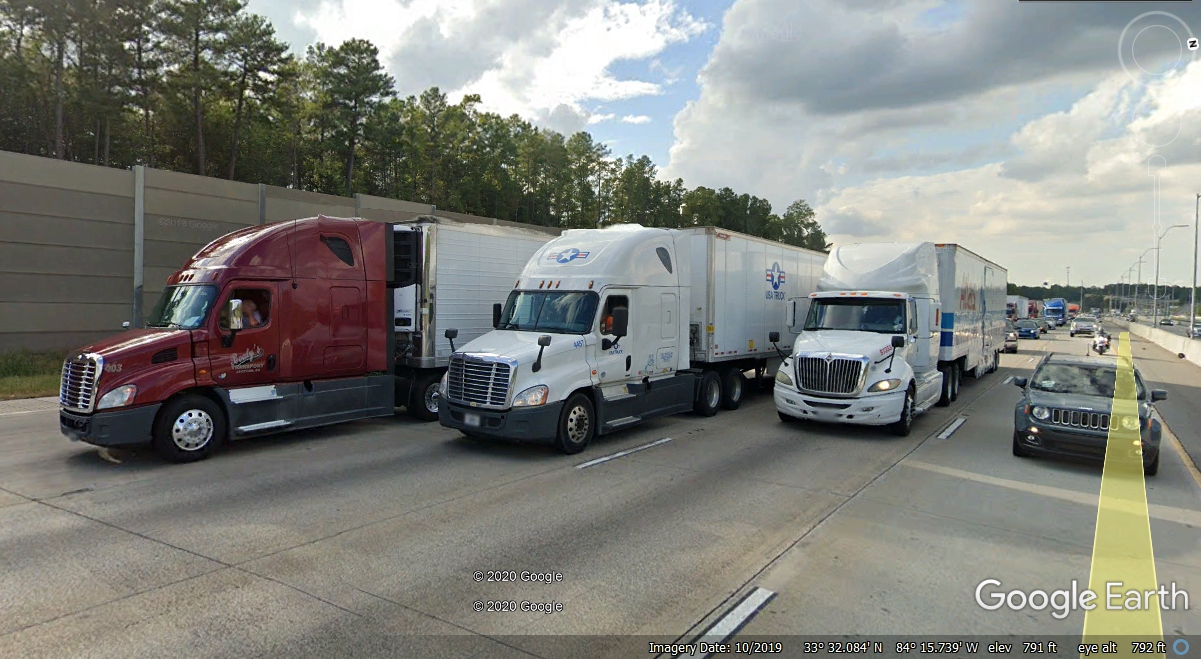 When I reached exit 225, we were on a hill and I could see traffic ahead that confirmed I needed to get off I-75. The southbound I-75 had been reduced to three lanes and it got slow enough I decided to get off here and head west to US 41 to go south completely away from I-75 and all the truck traffic.  I am amazed how Google Earth has used a number of satellite images that do not contain traffic, or they have touched up the images to show empty roads. I turned right at the end of this ramp on to Hudson Bridge Road.  Over the years I have passed this location at multiple times of day and it is always a busy place. 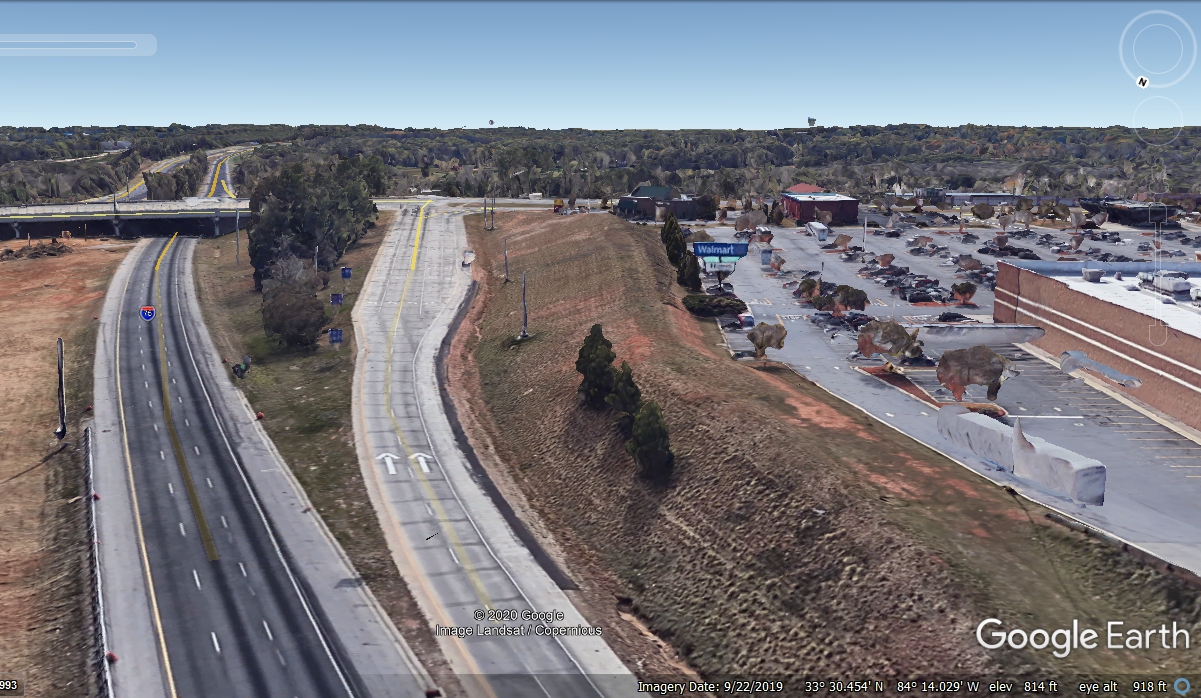 I went west on some local roads until I connected to the US 41 four-lane highway going south to Griffin and Barnesville, Georgia. 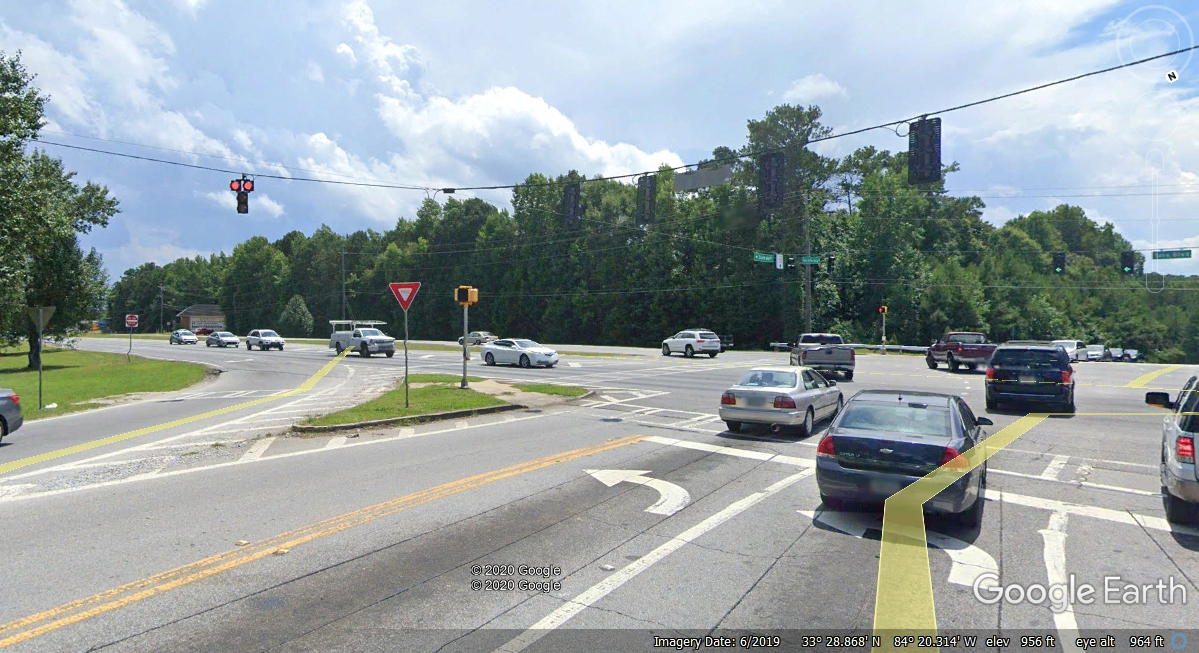 Once each year there is a famous NASCAR 500-mile race held at the Atlanta Motor Speedway on US 41 near Hampton, Georgia here with all big-name pro race car drivers . 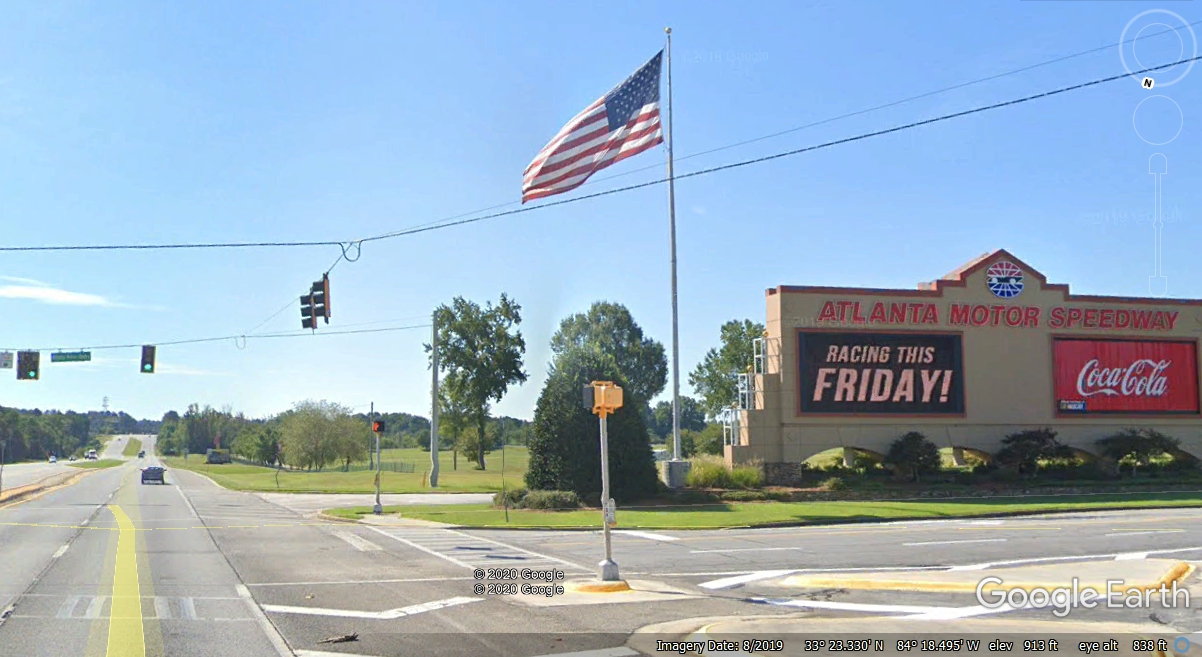 About 30 miles south of the raceway and below Griffin, Georgia and Barnesville is where US 41 heads East toward Macon, Georgia.  The four-lane highway ended about 2 miles north of this intersection.  I continued south on US 341 two-lane until I got to Fort Valley, Georgia.  This highway has plenty of PEACH TREE groves, and Pecan groves.  That is the area that made Georgia "The Peach State" as seen on their license plates. 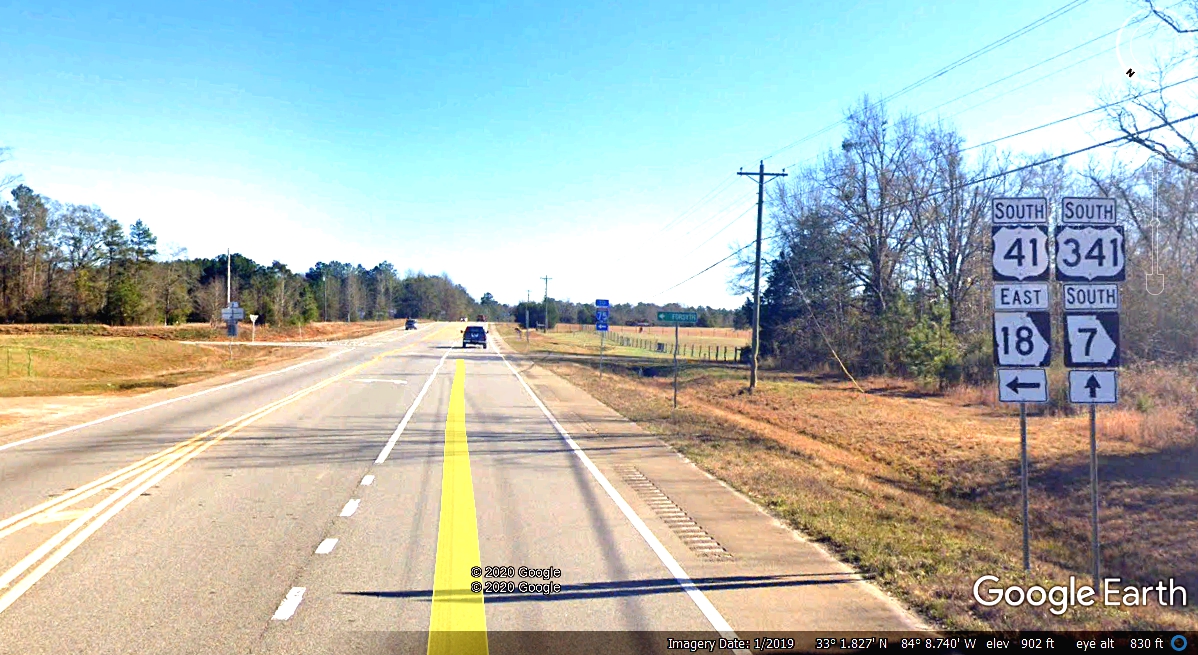 I took the US 341 bypass around Perry down to Hawkinsville. 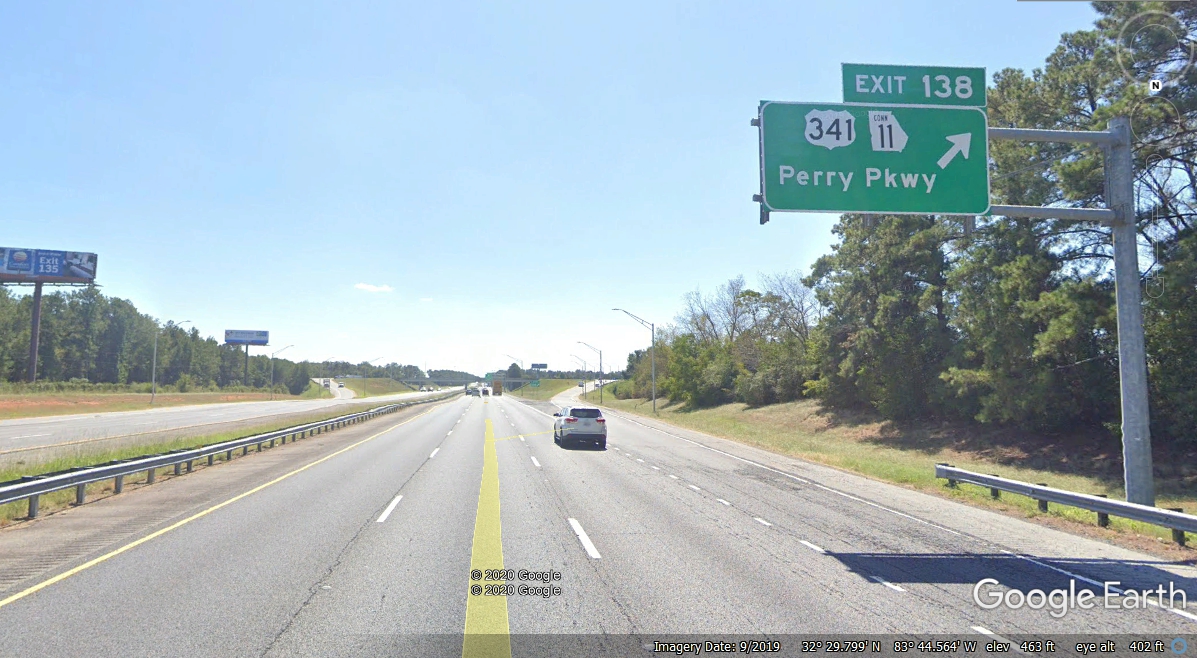 About 2 miles past where the bypass connects to US 341 going to Hawkinsville, we went through a grove of Pecan Trees that covered the highway. 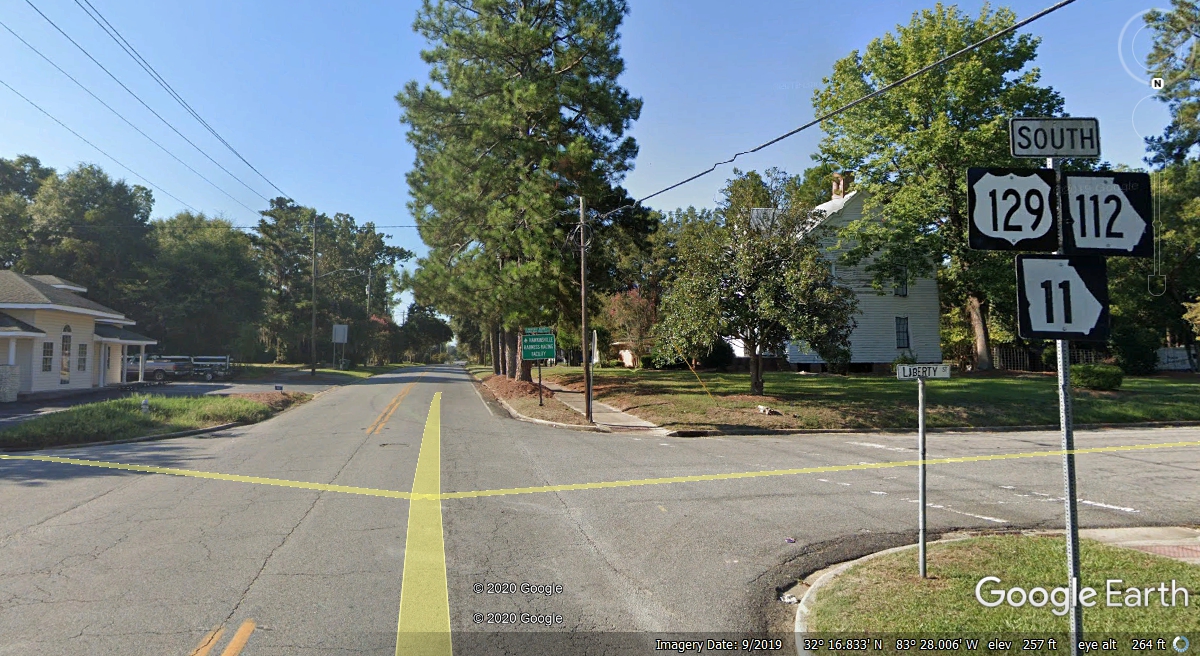 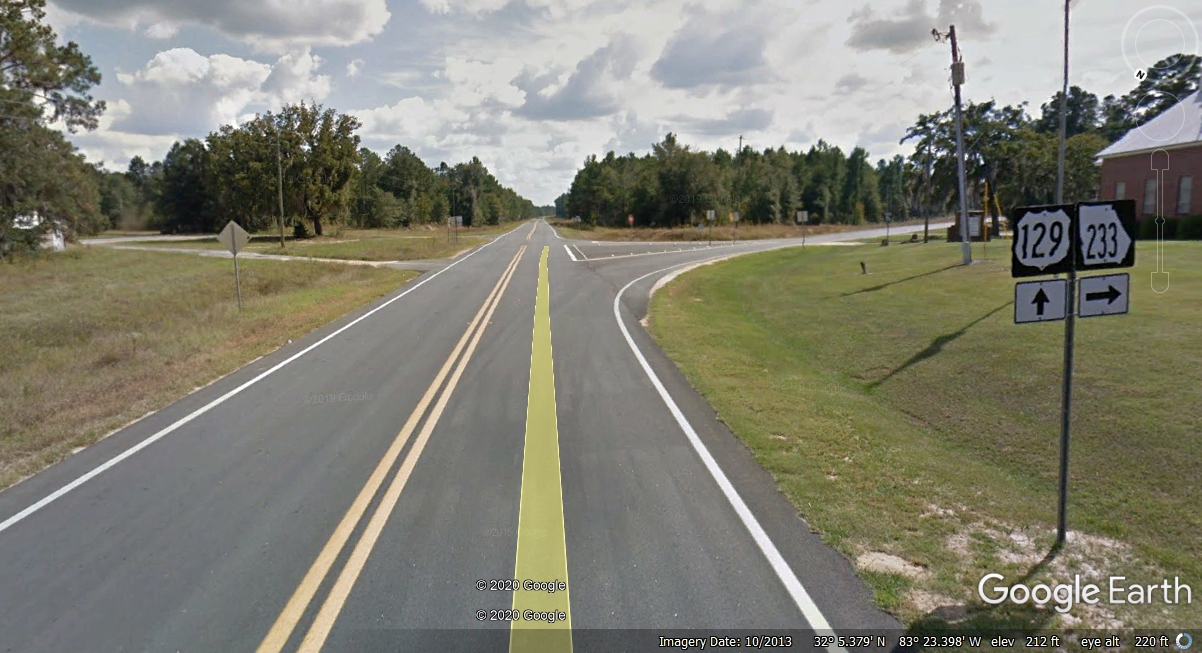 This aerial view of Georgia Route 233 reveals plenty of farm land and not much traffic.  We did not see much traffic when we went this way back to I-75 southbound. 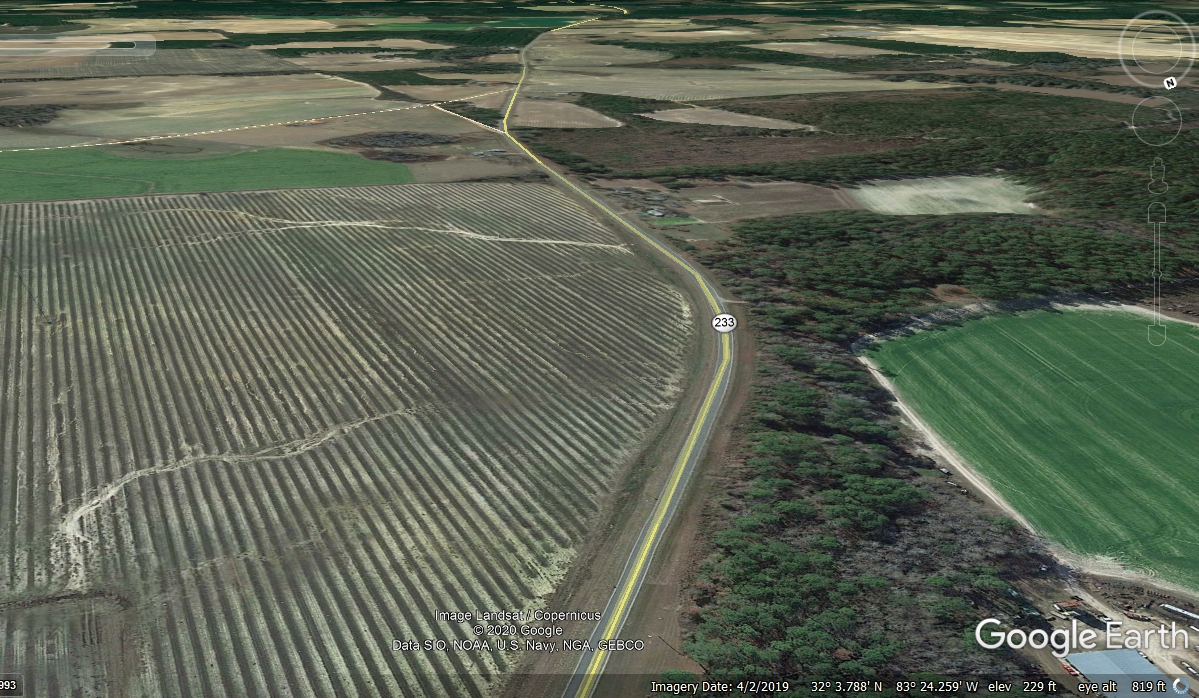 US 280 is an alternate route through small towns from Savannah to Columbus, Georgia.  US 80 goes through bigger towns north of here like Dublin and Macon, GA.  This is Rochelle, Georgia, a farm town for sure.  At US 280, we went west to the little town of Pitts, Georgia, then south on Georgia route 159 south to join I-75 south Exit 84 at Ashburn, Georgia. Here is the small town of Pitts, Georgia.  When I was in college in the late 1960's, there was a guy in my electrical engineering classes whose middle name was Pitts.  He preferred the name "Pitts" over his first name: "Eugene."  The intersection for Georgia route 159 is in the block just past the green sign ahead. 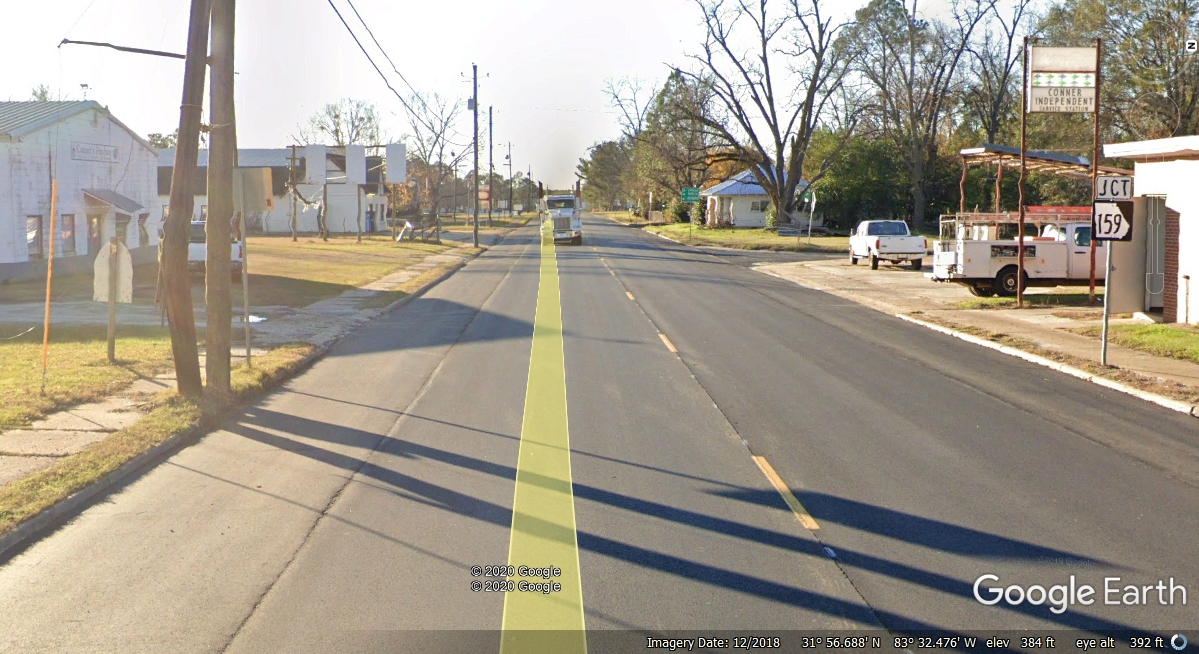 Ashburn is our next town located on Interstate 75.  I am showing these images from East to West as we are traveling in that direction on July 28, 2019.  The Google Earth camera vehicle drove this route from West to East.  That is the reason you see the same truck in these images as it follows the Google Vehicle. 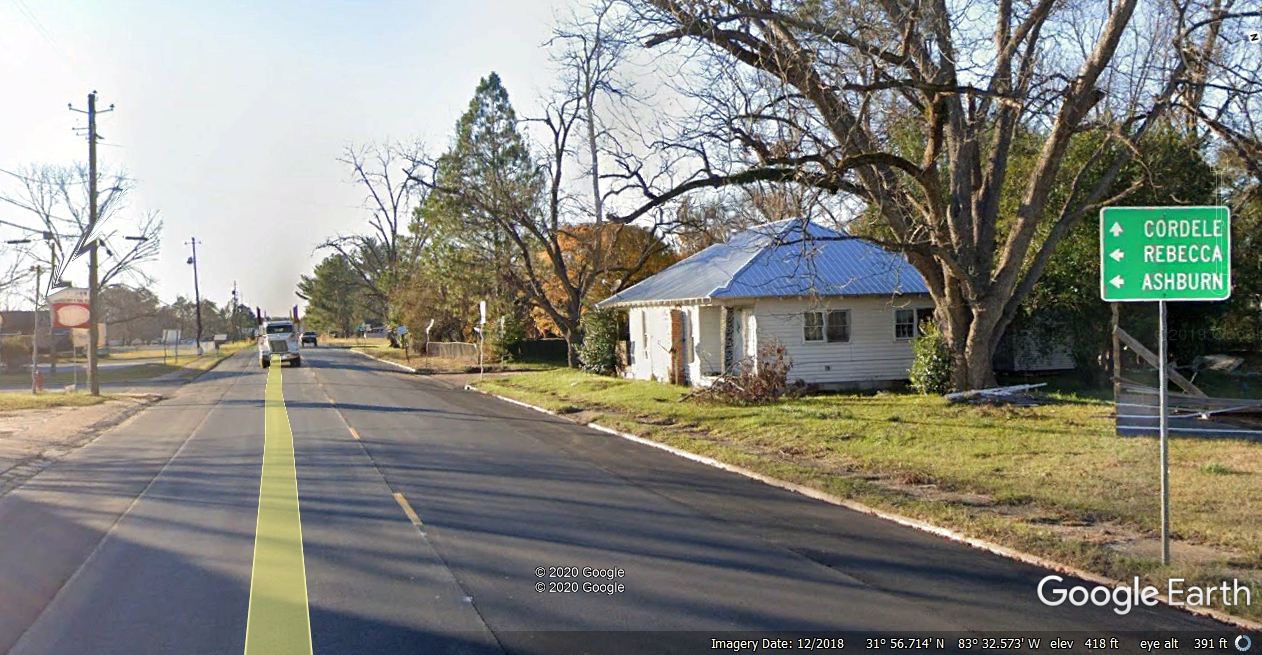 We finally get back to I-75 Exit 84 via Georgia Route 159 through more farm land all the way to the Ashburn exit.  This view is looking south on a normal traffic day in this part of Georgia 84 miles north of the Florida state line. Our next stop was only 22 miles south of where we got back on I-75 at exit 82.  Linda wanted to go to Adcock Pecans near Exit 62 to buy a couple of bags of shelled pecans. Here is the "famous" Adcock Pecans" tourist attraction and rest stop in Tifton, Georgia.  We stopped here at 5:55 PM today.  We got out of here at 6:11 PM after a quick break and with the bags of pecans tucked away in the car. Here is the BLUE GPS ground track showing how we dodged some traffic jams on I-75 at two different locations. Our next stop was for dinner in Valdosta at this Longhorn Steakhouse at 6:52 PM with our departure at 8:15 PM.  This startup data point was the last one for the trip as the coaxial cable at the input to the GPS finally lost contact with the GPS antenna. We got the last fuel for the trip at the same Murphy Oil station we used going north when we started our trip. The distance from the gas station in Valdosta to home in Kissimmee, Florida is 228 miles.  It was dark when we got off I-75 and on the Florida Turnpike. 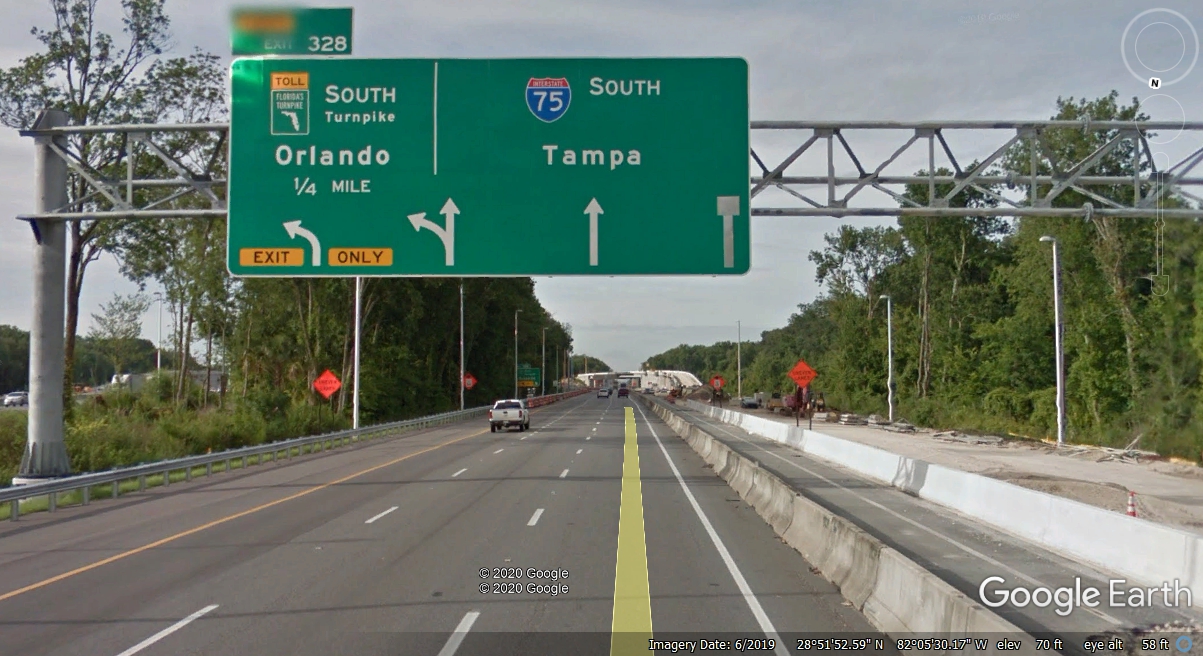 Since my GPS was out of service, I looked at Linda's Sunpass toll road account and found we got off the Florida Turnpike at 11:34 PM.  We got home just after 11:38 PM just a few miles south on US 441 from this Turnpike exit for Kissimmee and Saint Cloud.  It felt really good to be home and not in a motel on this night. April 19, 2020:  I have been working to create these 40 web pages about our July 2019 vacation for quite a while.  Today, I finished the last changes to this page with this entry.  I just revisited my Delorme Street Atlas version 9 map of the entire trip from beginning to end.  I have accounted for the detours and the gaps in GPS coverage due to my coaxial cable damage on the right-angle BNC connector from the GPS antenna.  I also added in the route from the dinner I had with Wendell and his wife from the restaurant near Chickamauga on Georgia route 2 over to my old condo in East Ridge, Tennessee.  I forgot to turn on the GPS when leaving the restaurant.  The total trip mileage now stands at 3,985.1 miles traveled from July 19 to July 28, 2019.