July 26, 2019: This on-ramp to I-75 southbound is about 320 miles from where US 2 first enters the Upper Peninsula of Michigan from Wisconsin.  This is our way back home with more adventures along the way through Ohio and a family visit in Atlanta, Georgia.  US 2 goes across the overpass ahead on its way with I-75 north to the border with Canada. 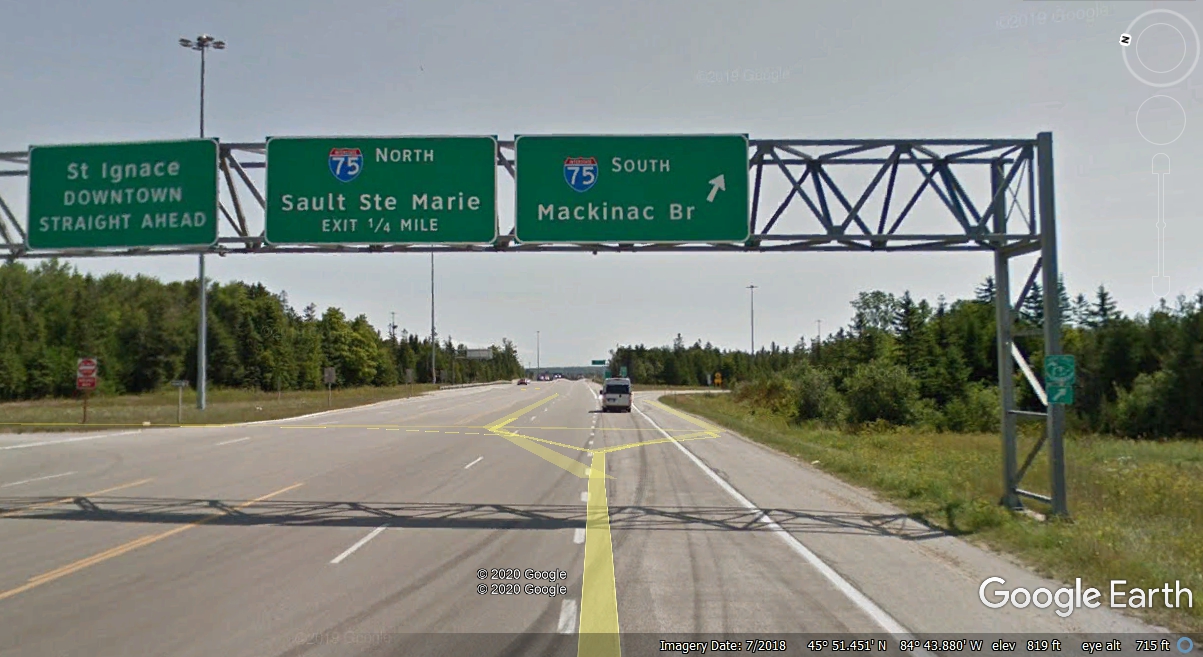 We did not take this Bridge View exit when we passed this way on July 26, 2019.  As I process all our photos and scenes from Google Earth, I decided I would take the path of the Google Earth car to see the bridge from this side road.  The other bit of information in this photo is that it is 343 miles to the Michigan / Ohio state line on I-75. 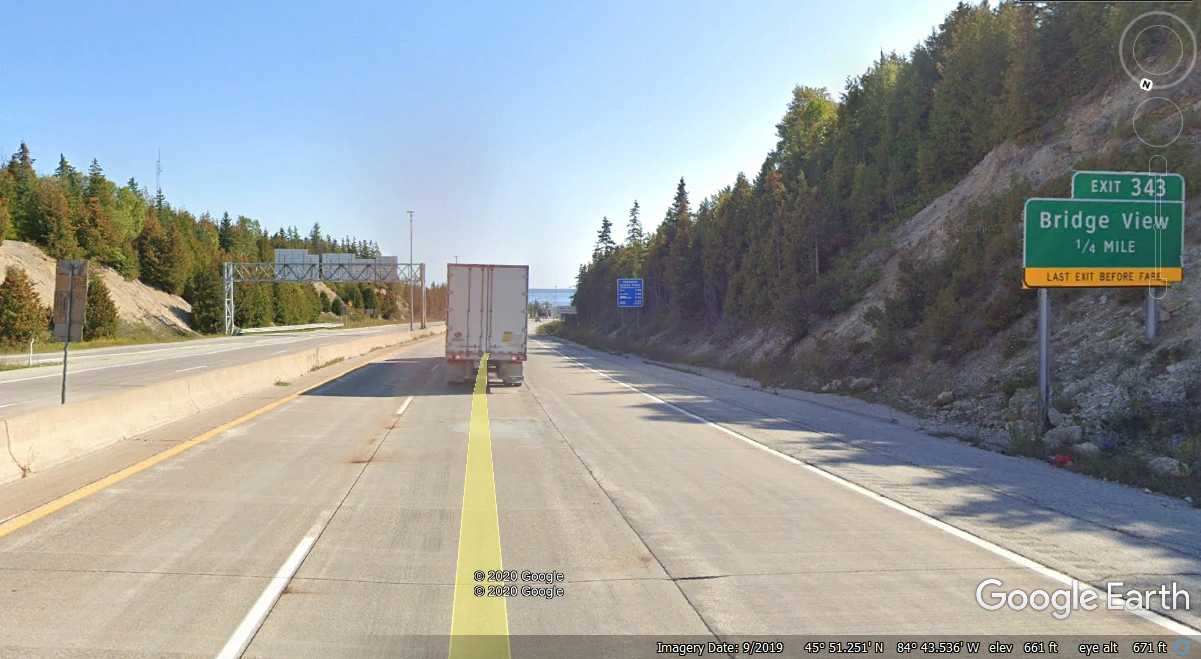 Here is a view of the bridge from the Google Earth camera car about three-tenths of a mile west of the I-75 highway connecting to the suspension bridge. It was also an overcast day in July 2018. 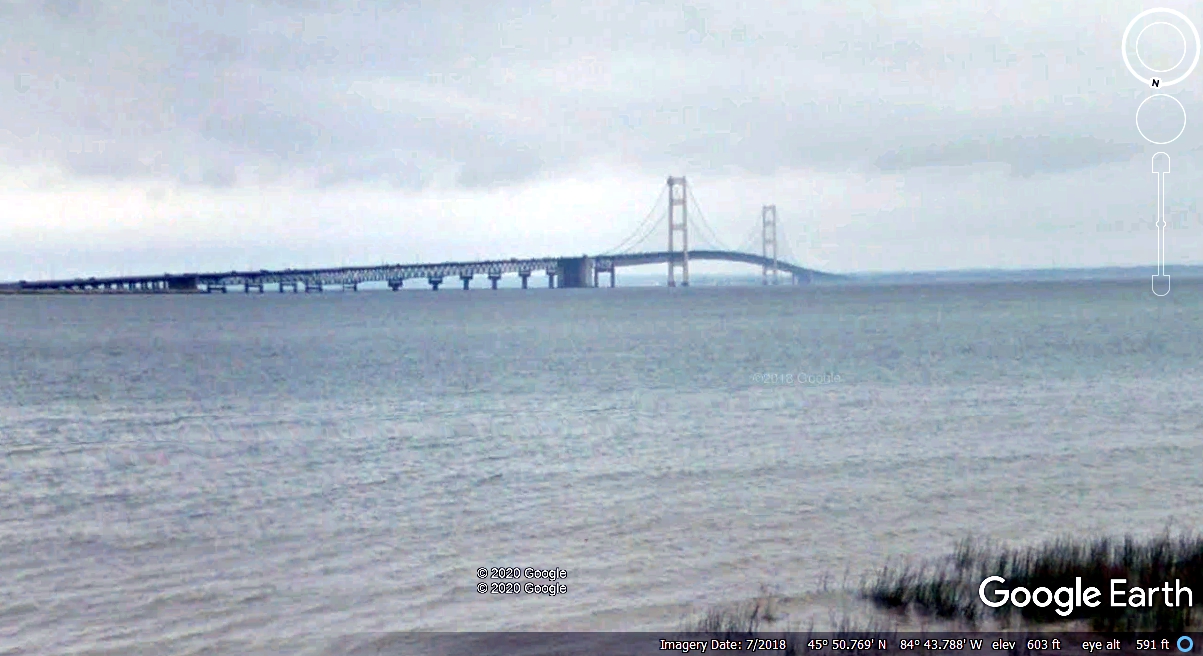 This is the Google Earth view of the southbound toll gates. 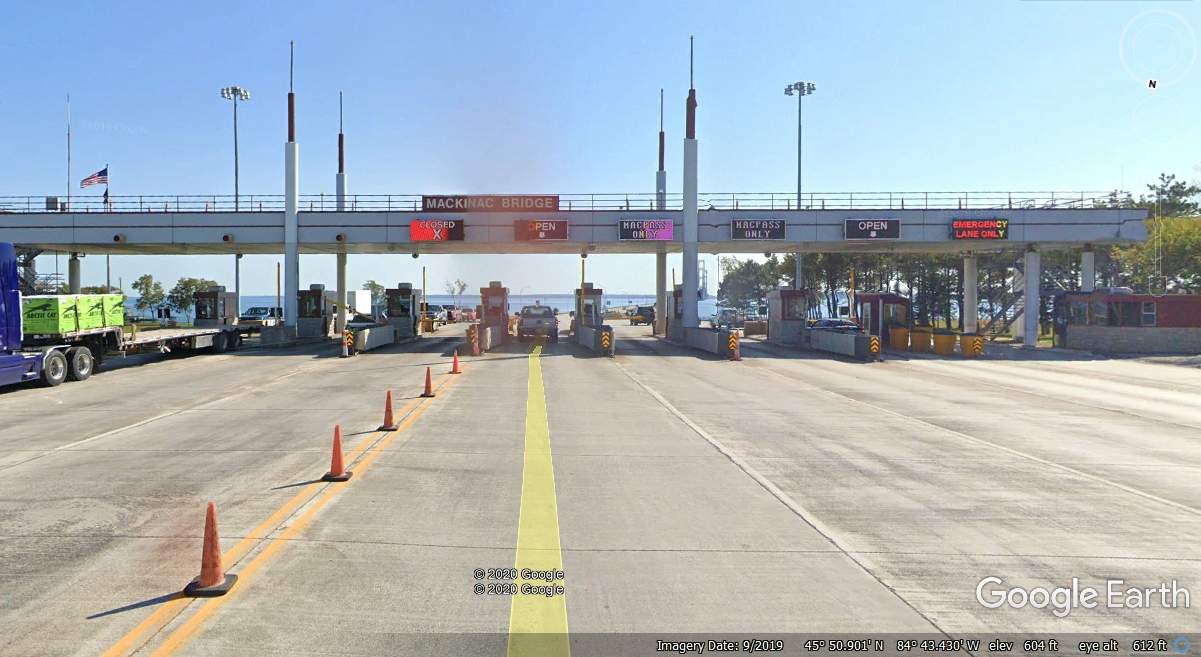 And of course, Linda took this photo as we were approaching the CASH ONLY lane to pay our $4.00 fee to get across the bridge to the "Hand of Michigan" since it looks like a hand in a mitten, not gloves for every finger.  Anytime you ask someone from Michigan where they live, they will hold up their RIGHT hand and point to a part that corresponds to a map of lower Michigan.  Of course, if they live in the Upper Peninsula (You-pers) they do not hold up their hand except to point away from the hand where their home is located in the Upper Peninsula. 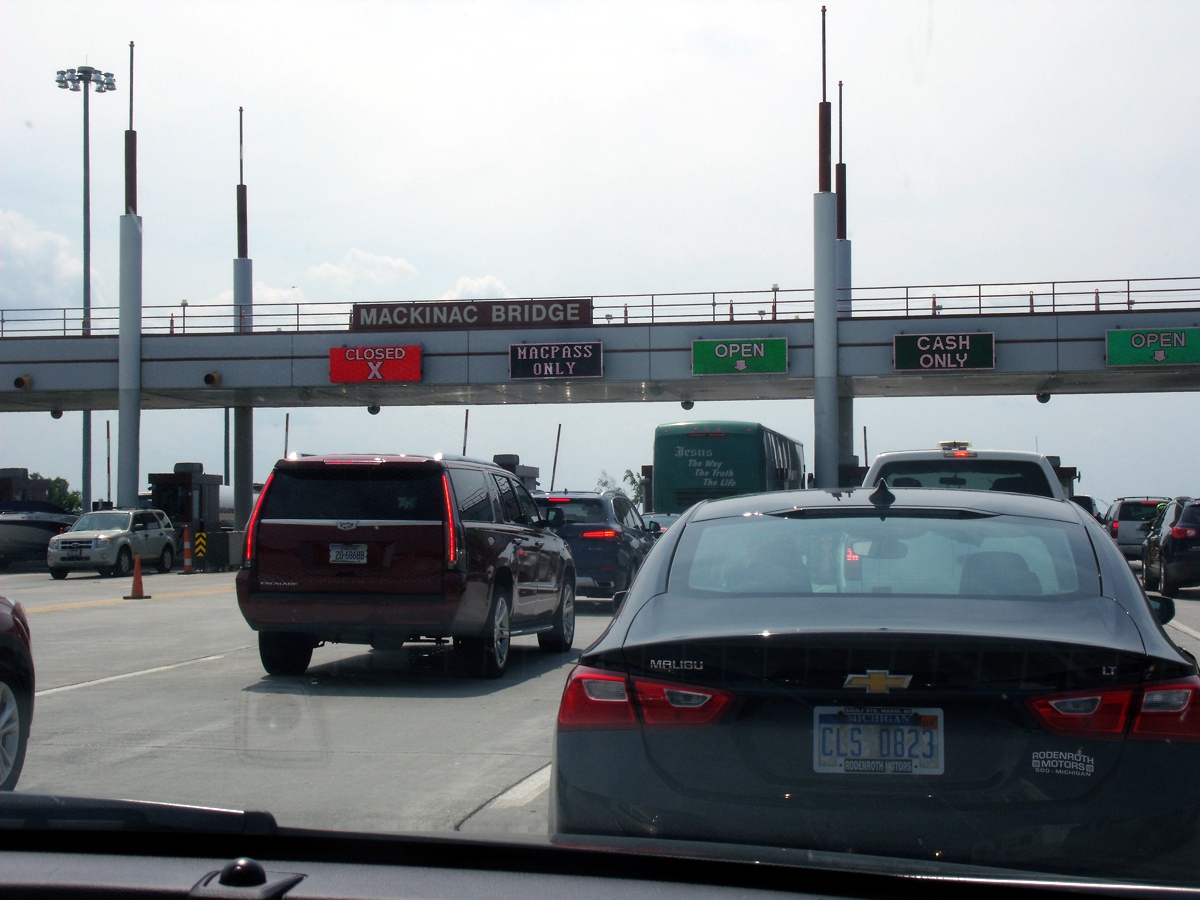 Here is Linda's photo taken after clearing the toll gate heading south.  It was a hazy day for us with some high-level overcast clouds.  I used the "auto adjust" in Corel Photo Paint to provide more contrast. 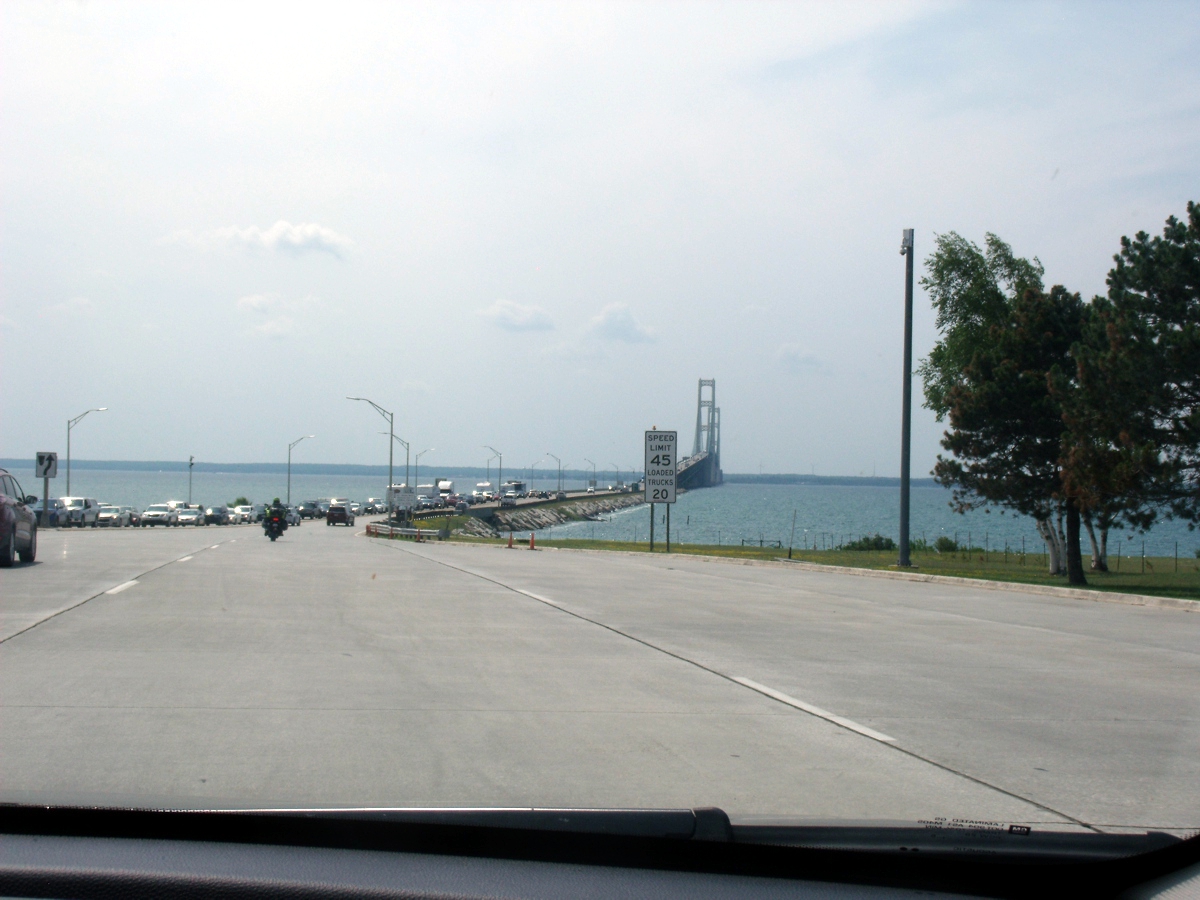 When the Google Earth photo vehicle approached the bridge in September 2019, they had a bright sunny day as you can see here.  The driver did not clean the camera lens shield in the forward direction of the camera ball.  The brown haze at the center of the image below is the result of poor cleaning. 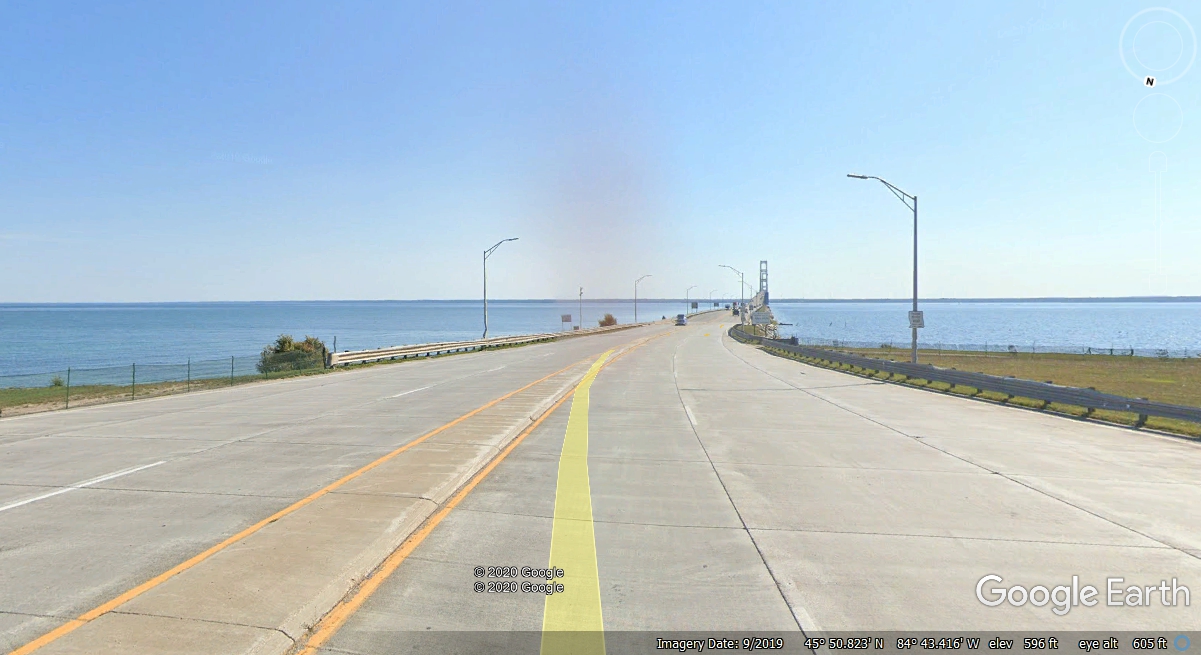 This view looking northwest from the Google Earth camera vehicle has a clean lens as we look back to the shore where US 2 approaches I-75 and the bridge. 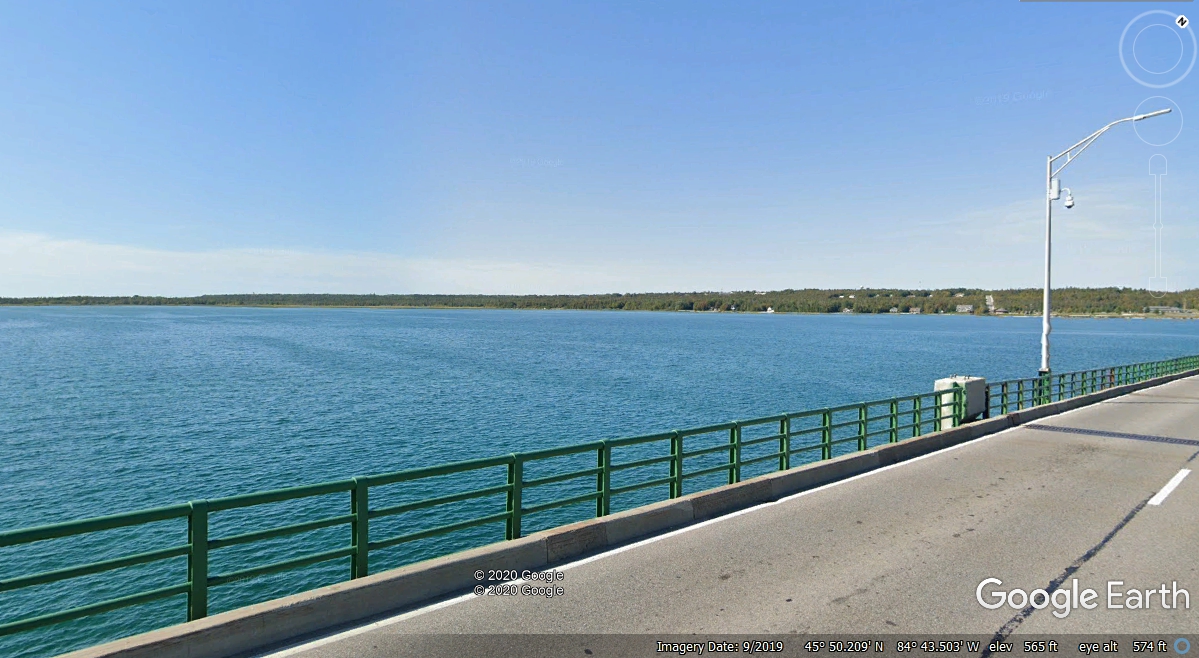 Need I say anything here? 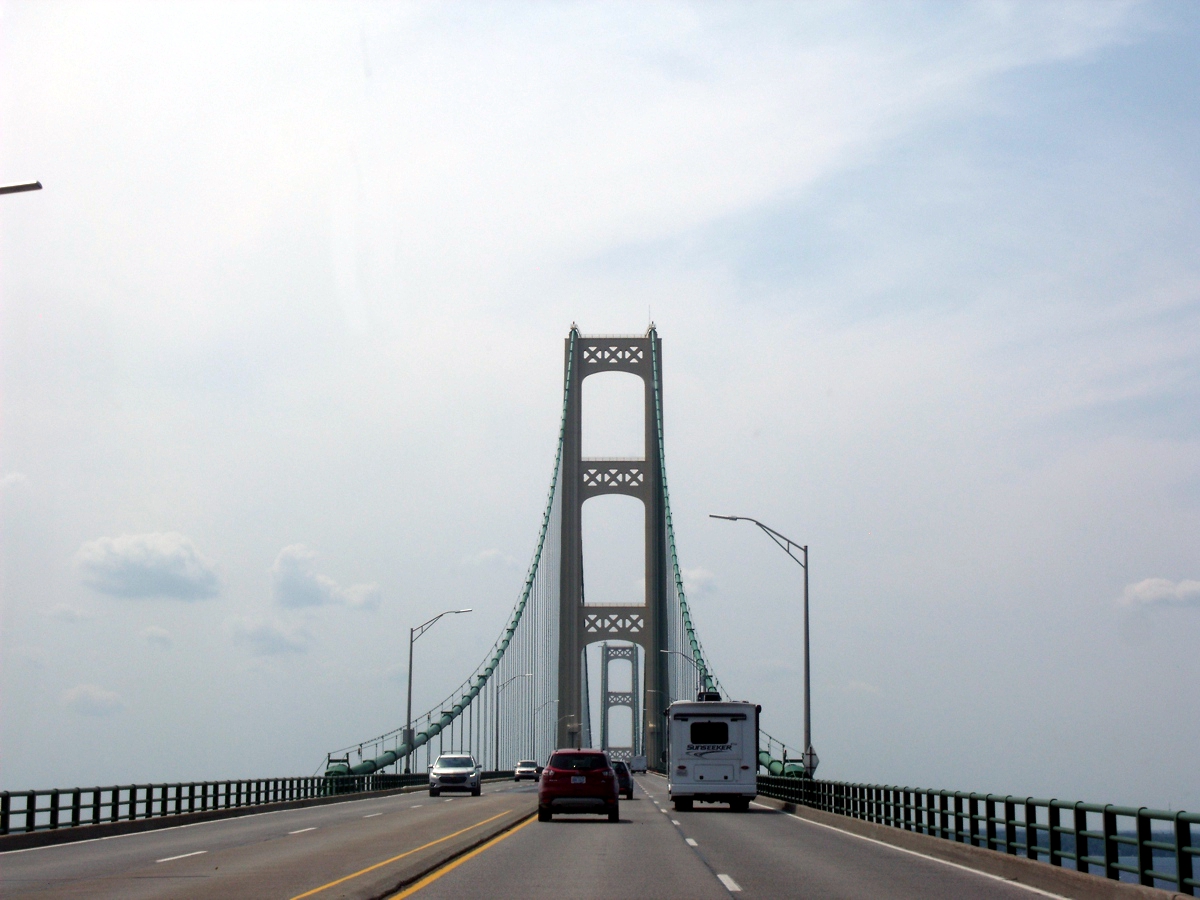 Closer to the TWO TOWERS that hold up all of the suspension bridge sections. 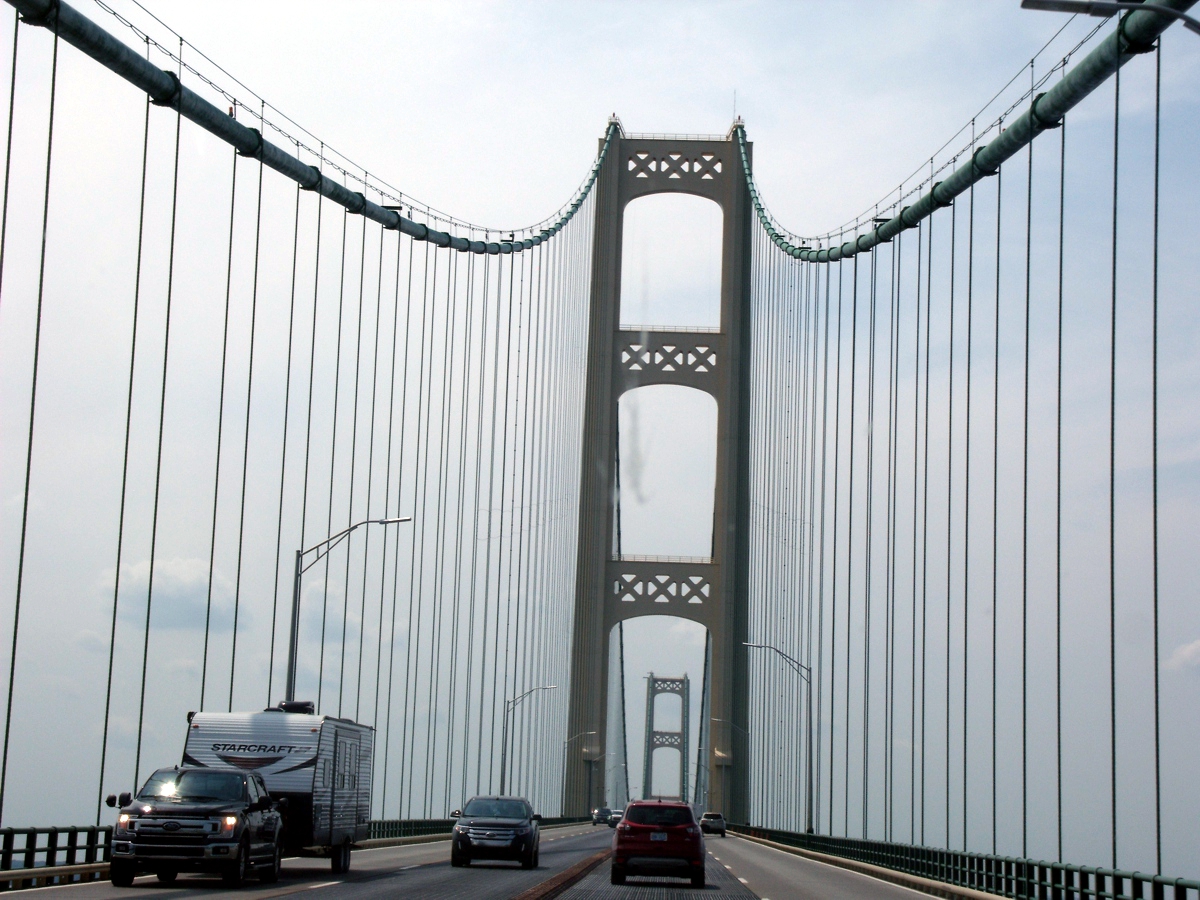 I went to the middle of the bridge with the Google Earth Camera car and looked West at a couple of ships out there on Lake Michigan.  I discovered this weather vane with wind meter were on the very center of the bridge at the highest point of the roadway.  I also noticed a blue-green light at this location. 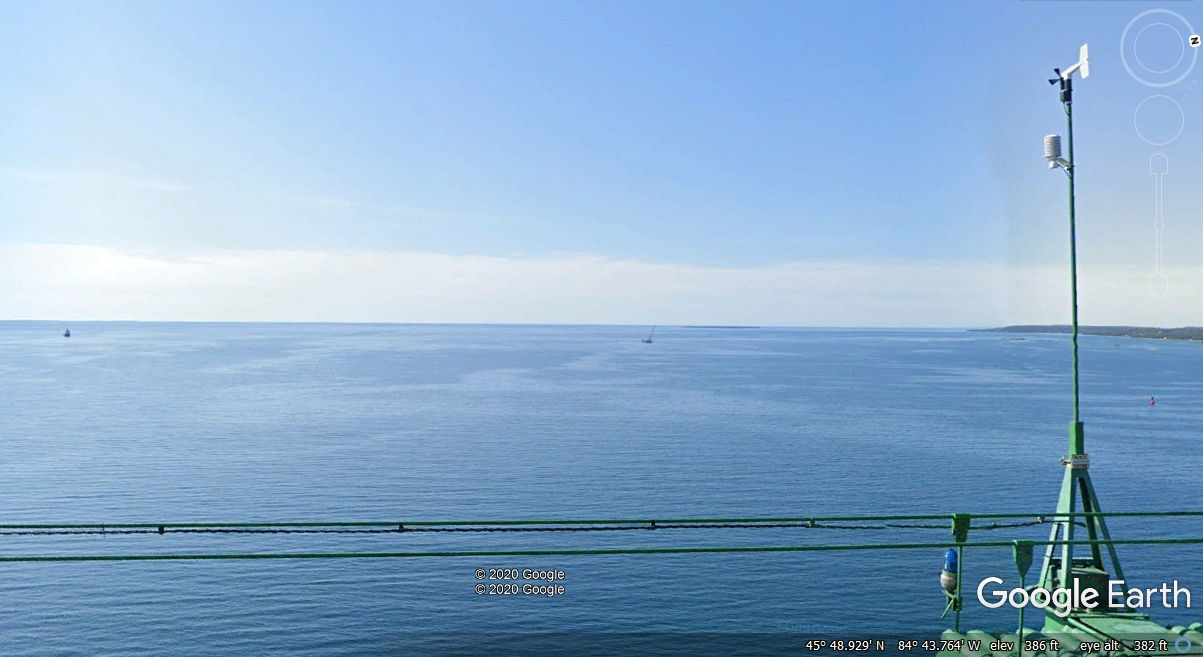 About 120 feet south of the weather vane, there is a RED light seen at the left side of this image that also shows the two ships on the Lake Michigan west side of the bridge. 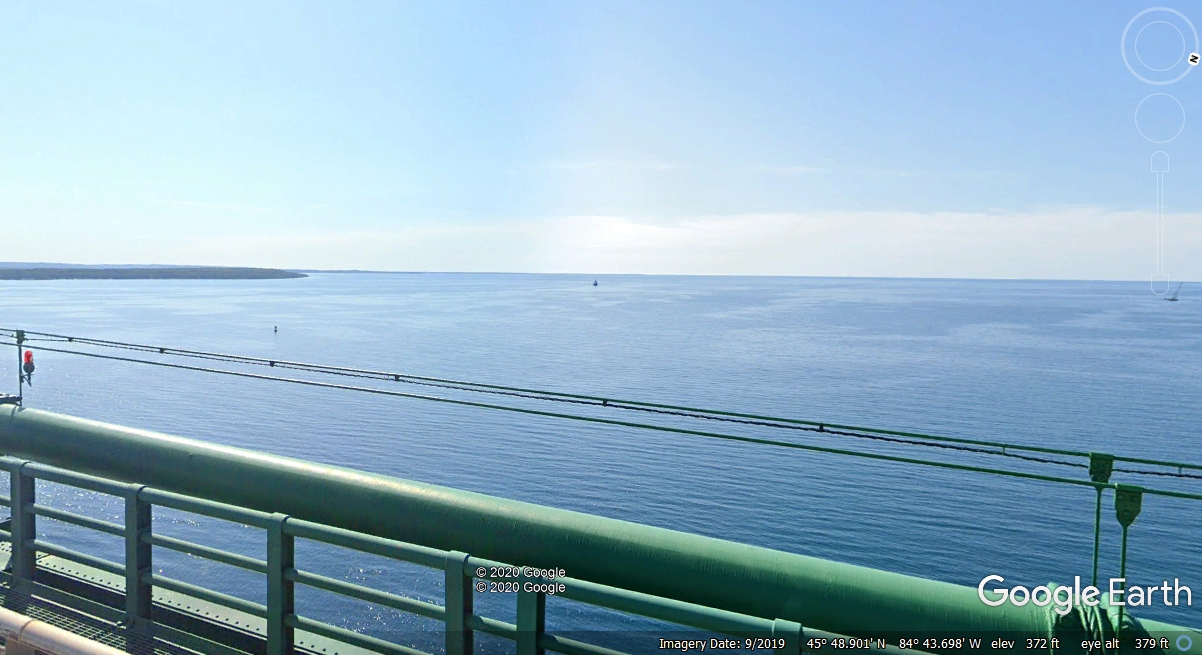 When I thought about the placement of the first two lights, I moved to a point 120 feet north of the weather vane location and discovered another RED light.  These three lights apparently mark the ship channel under the highest point of passage under the bridge.  The two RED lights are below two of the highway lights for traffic on the bridge. 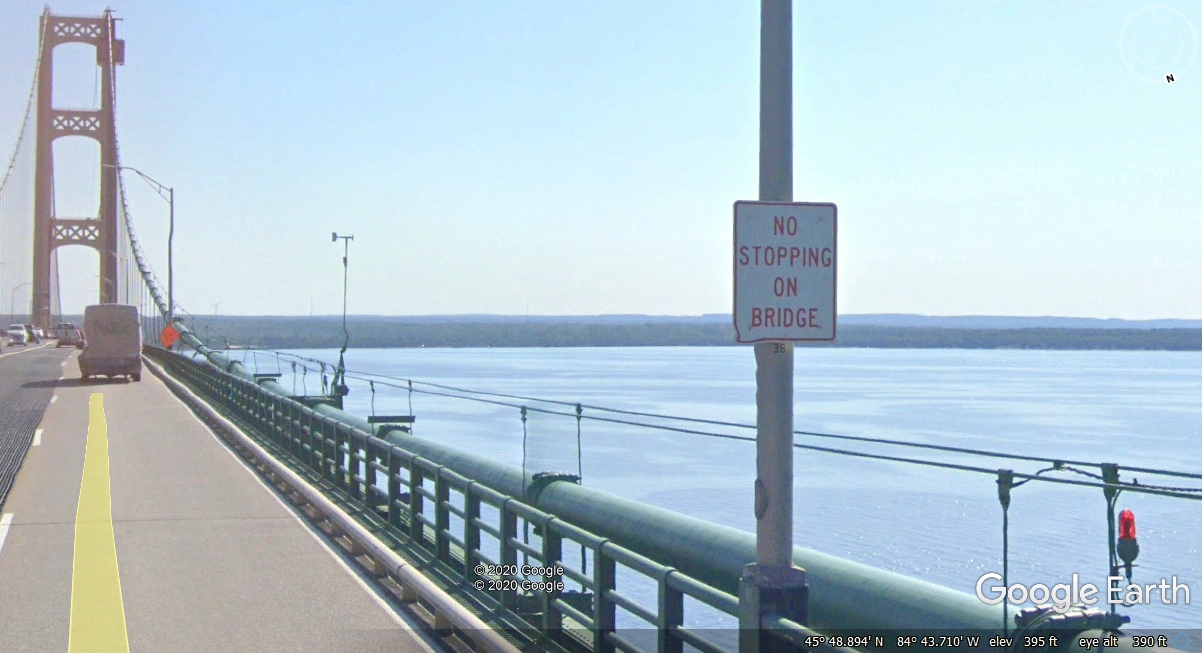 Here is a view looking Northeast toward Mackinac Island from the center of the suspension bridge.  I thought about Mackinac Island while preparing this page.  I looked down at the island as seen by Google Earth. I reached for the little man on the right side of the Google Earth window and pulled the man down to a street and the front porch of the Grand Hotel.  I was greeted with images from a back pack camera operated by a Google Earth person walking about on the island.  Take a look at the street where the boats come to the island.  It is truly a wonderful place just over 5 miles from this camera location at the center of the Mackinac Bridge. 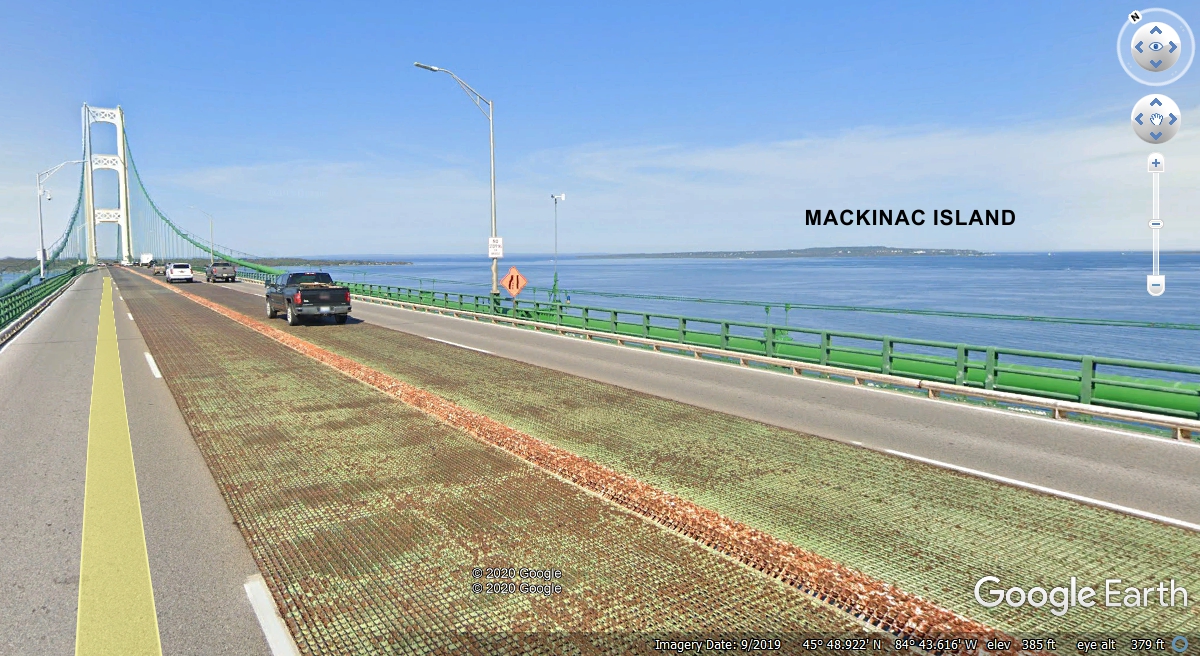 Here is an aerial view of  the town part of Mackinac Island where the ferry boats dock.  When you leave the dock and get on main street, turn left and you can walk down main street. 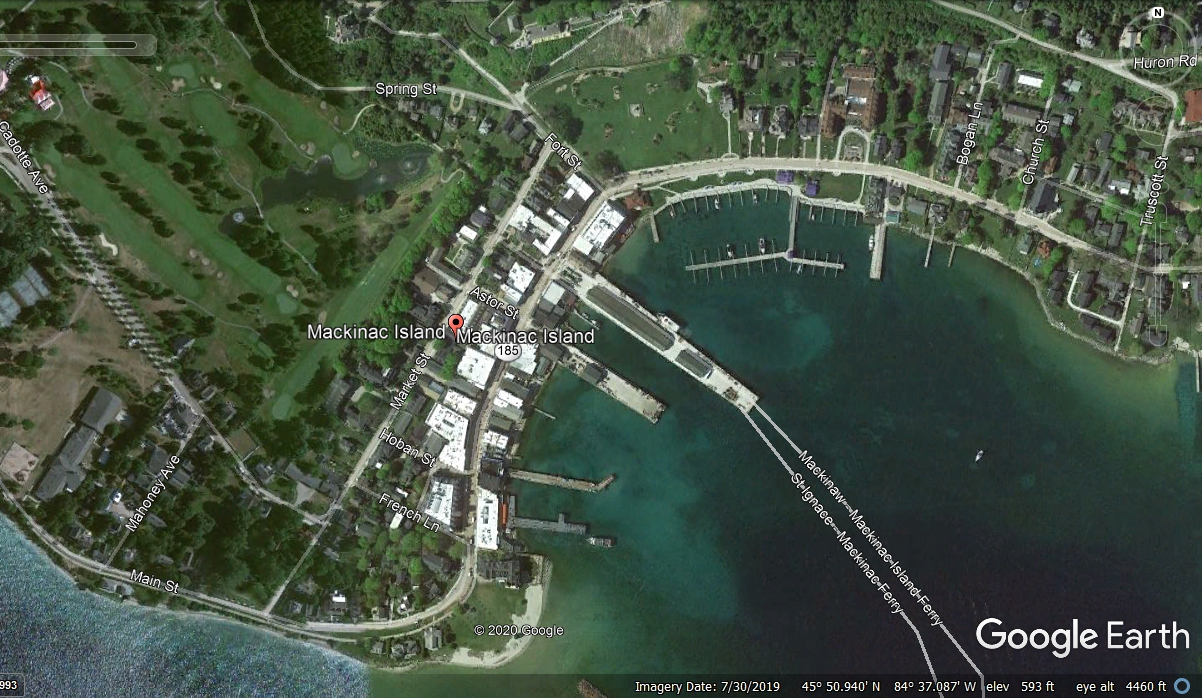 This is a Google Earth view of Main street looking south.  While you are taking your tour of Mackinac Island, you can walk the grounds of the Grand Hotel as the same crew that used a back pack camera to get this image you see below 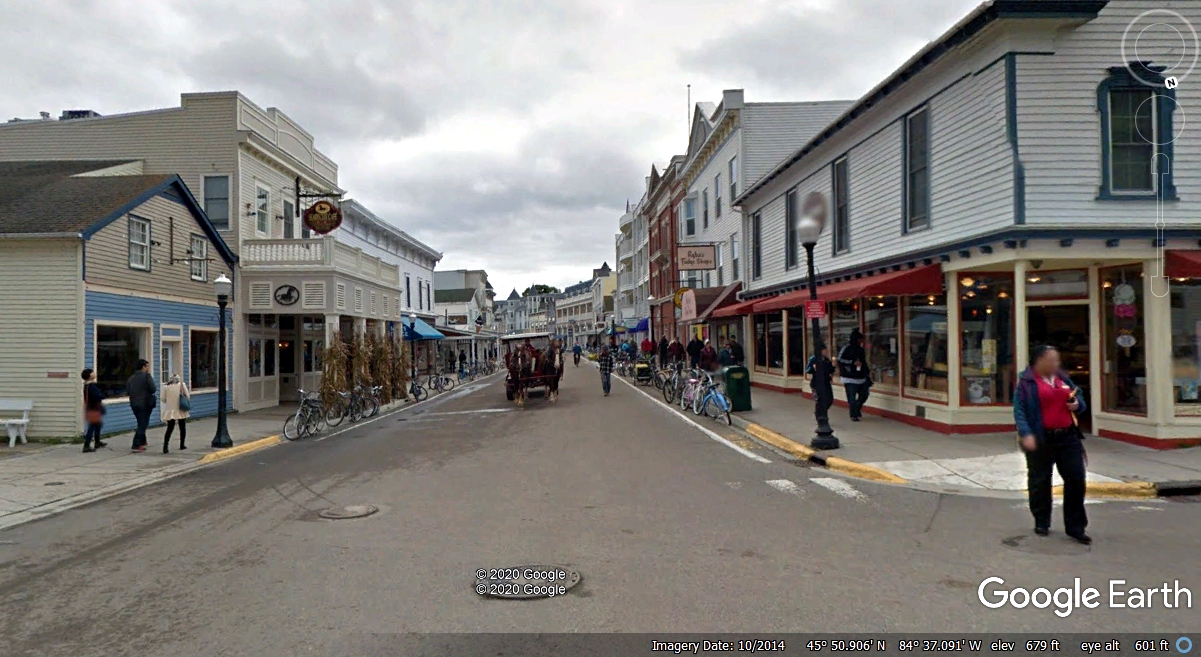 When you look down on the island you will not see the typical BLUE LINES created by Google Earth camera vehicles.  Just drag the little man from the right side of the Google Earth screen over a street you want to walk.  If the back pack camera man went there you will see his images in the normal "look around" fashion of Google Earth.  ENJOY! 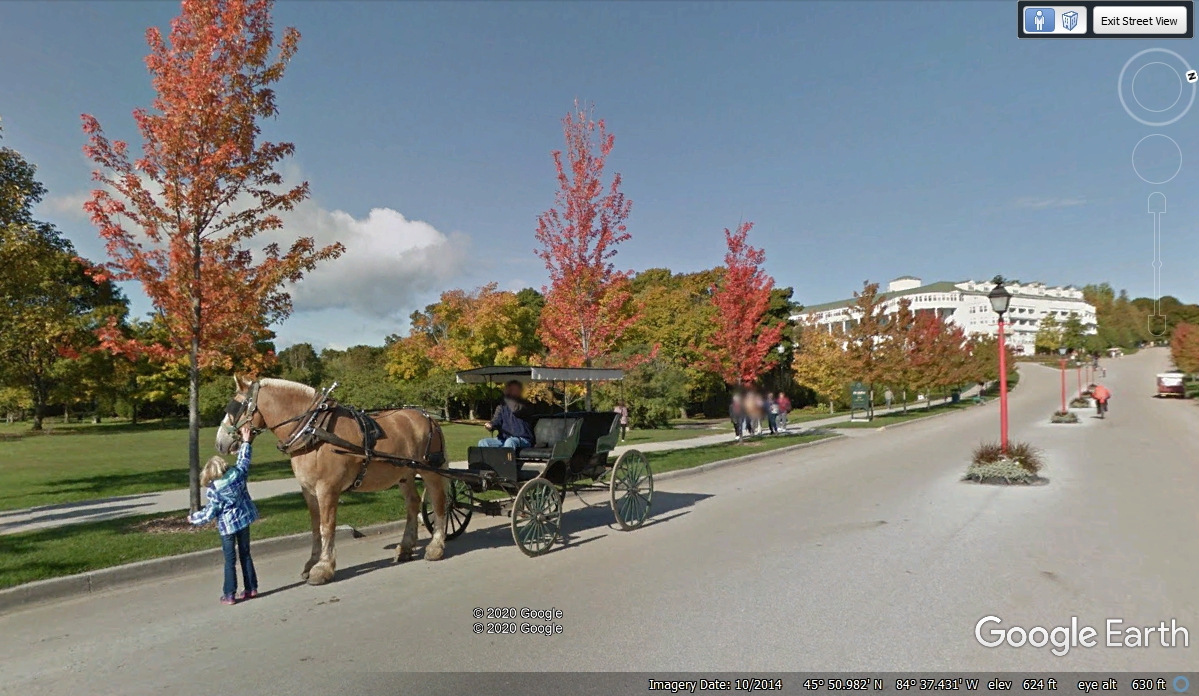