May 15, 2004 was a day of flying from Fort Lauderdale to Seattle.  It was a rainy day as many are in this area of the Pacific Northwest.  It was a long day of TWO airplanes and driving from SeaTac airport down to Kelso, Washington via Mount St. Helens.

This mural is in the little town of Toledo, Washington on the way from Interstate 5 to Mount St. Helens.  This neat mural is the first thing you see coming into the "downtown area". 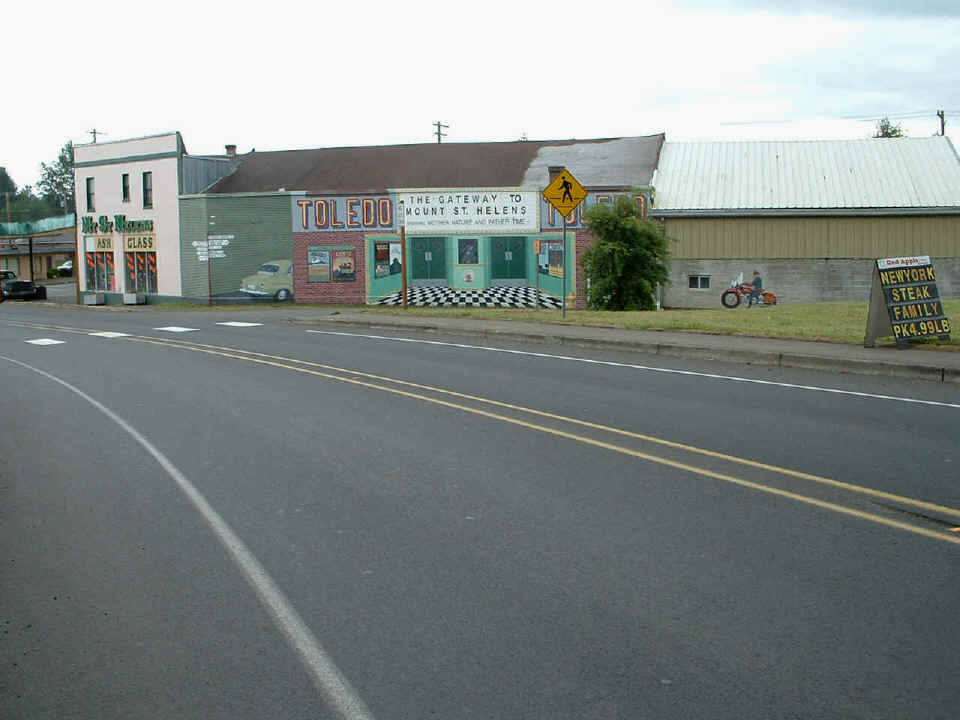 The "NO LEFT TURN" sign is real, the "movie house" is part of the illusion, as is the motorcycle cop and the car parked in the "alley" next to the movie theatre. 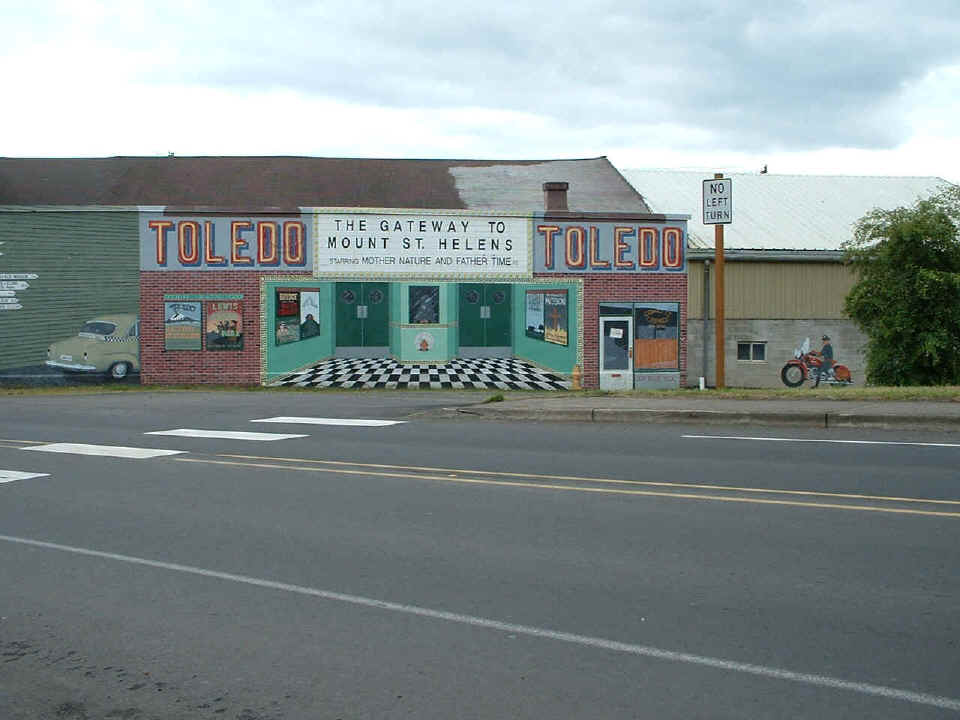 Even the "yellow fire hydrant" is part of the illusion here. 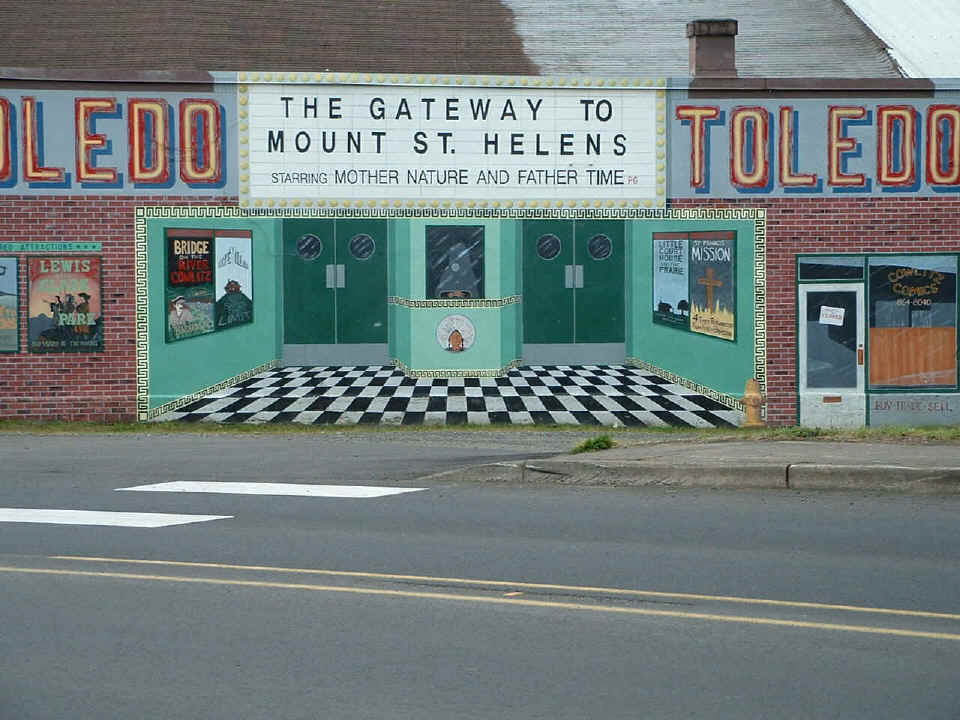 Just up the street to the right of the mural in Toledo is a little bit of nature's springtime color. 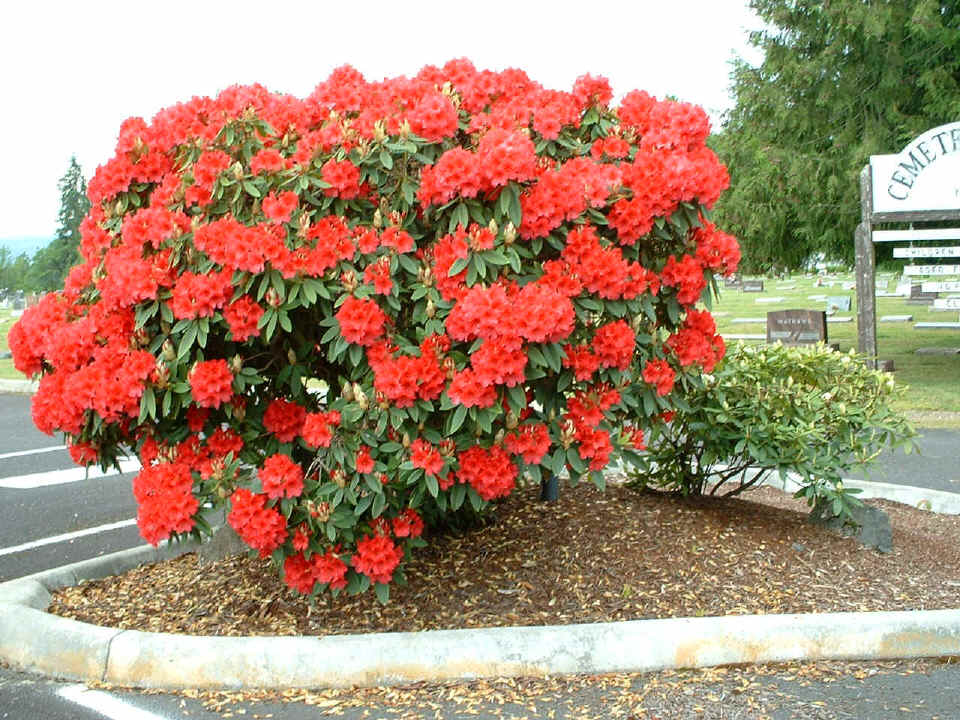 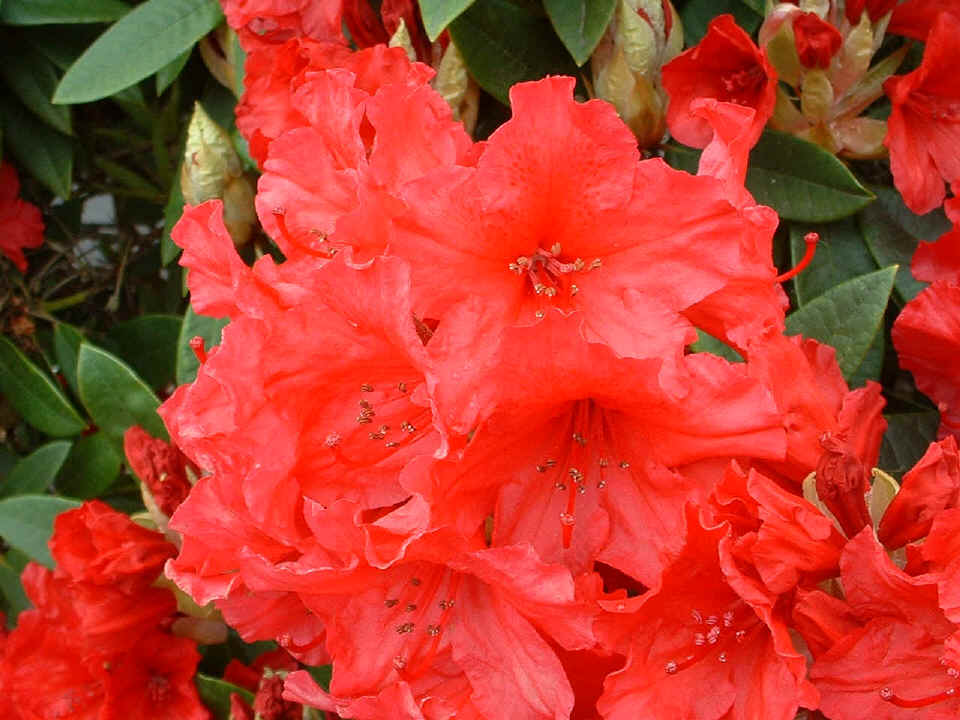 Heading toward Mount St. Helens on Washington state highway 504 (Spirit Lake Highway) finds this tourist stop with a "big foot" standing right next to a buried "A-frame" house that was finished right before the eruption, but never lived in by anyone. 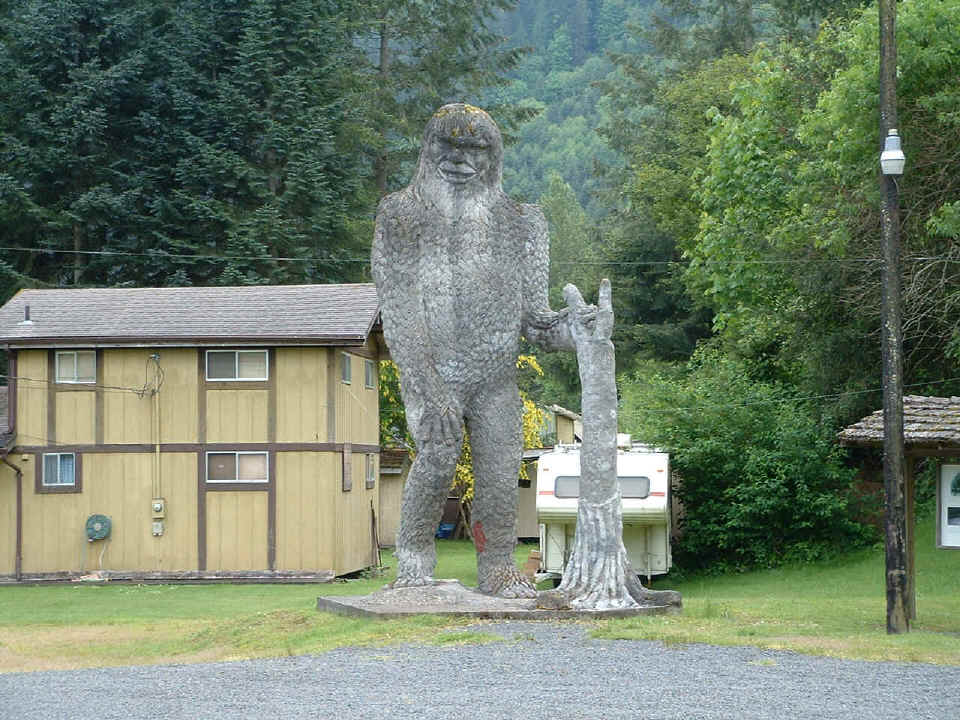 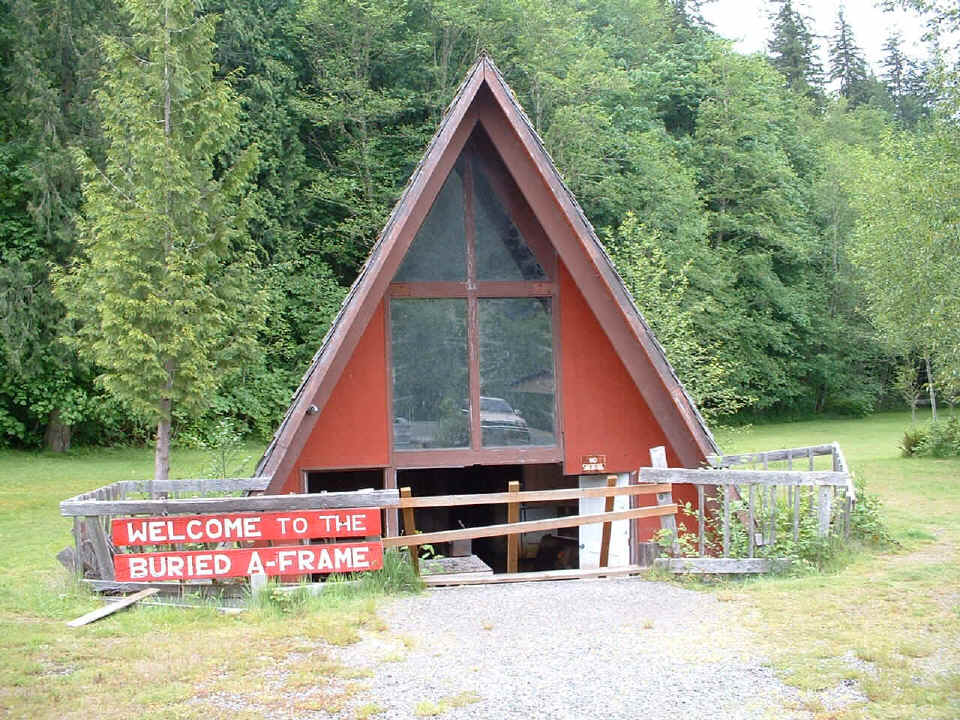 Further up the road, there is a visitor's welcome station with this scenic view right behind it.  This is the North Fork of the Toutle River with a large debris field from the mountain that has come down this valley.  You can see the clouds up the valley which completely shrouded the view of the volcano itself that day.  Sadly, the clouds never parted, and I did not get a picture of what remains of the mountain. 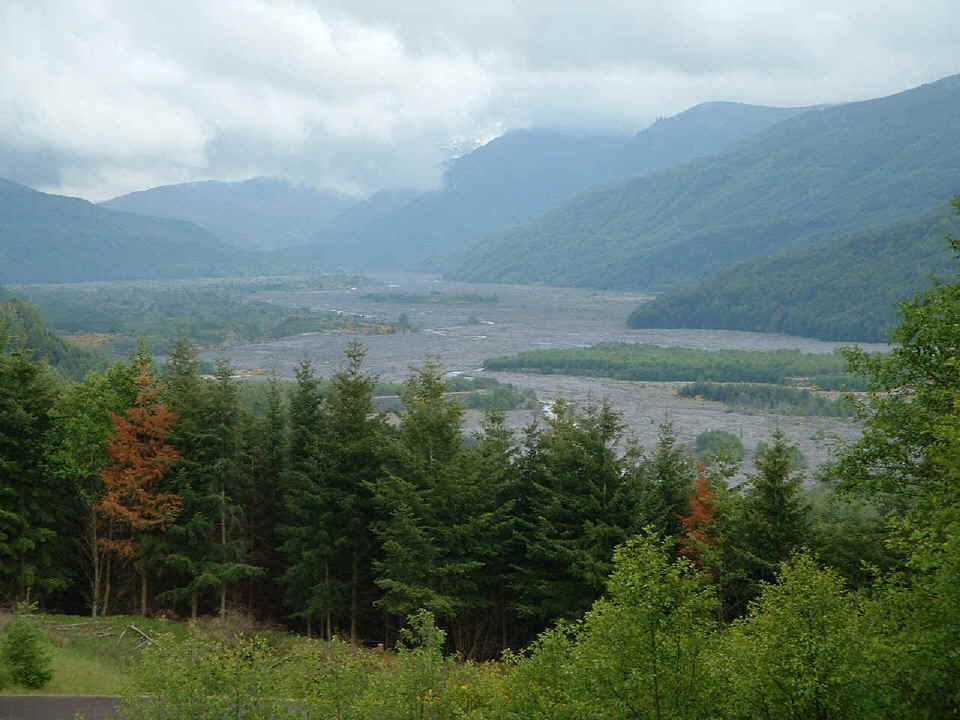 September 19, 2004 entry:  I was on another trip to Washington state and wanted to try my luck again with Mount St. Helens.  Last time, the fog layer was at the viewing site, and nothing was visible.  This time, the fog layer was around the mountain.  Here are three photos that show some of the area between the viewing area and the volcano.  The valley floor was raised about 150 feet in the center of this photo.  The beginning of white near the top of this photo is the lowest level of the snow on the mountain before the fog blocks the view of the peak. 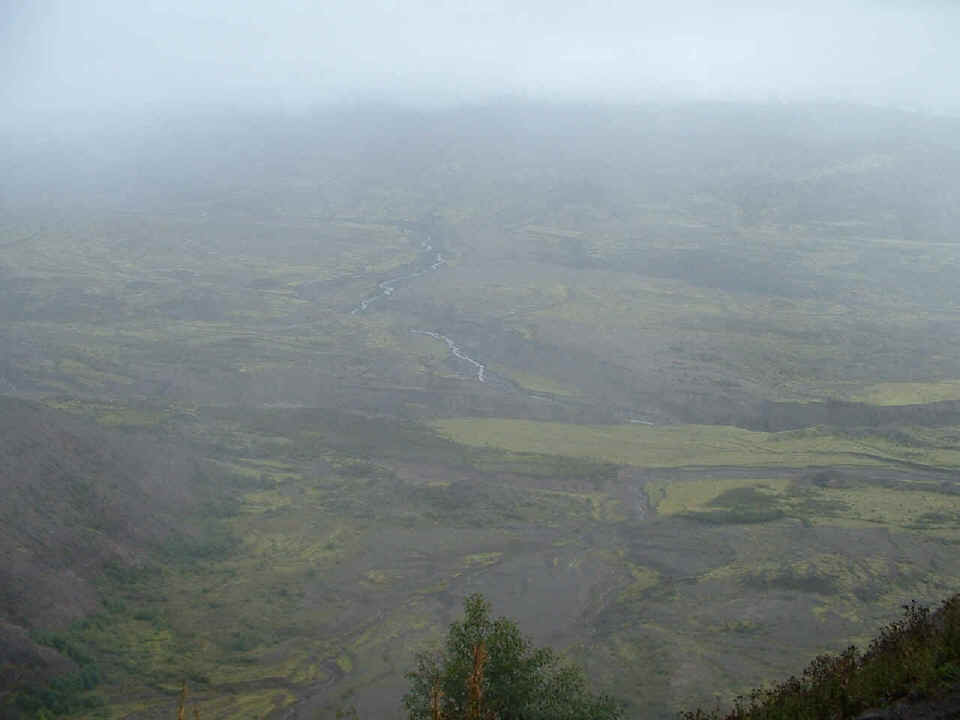 The photo below is looking just to the right of the mountain and downstream for the landslide, etc.  I had hoped when this clear air came in, it would bring the mountain into view, but no such luck. 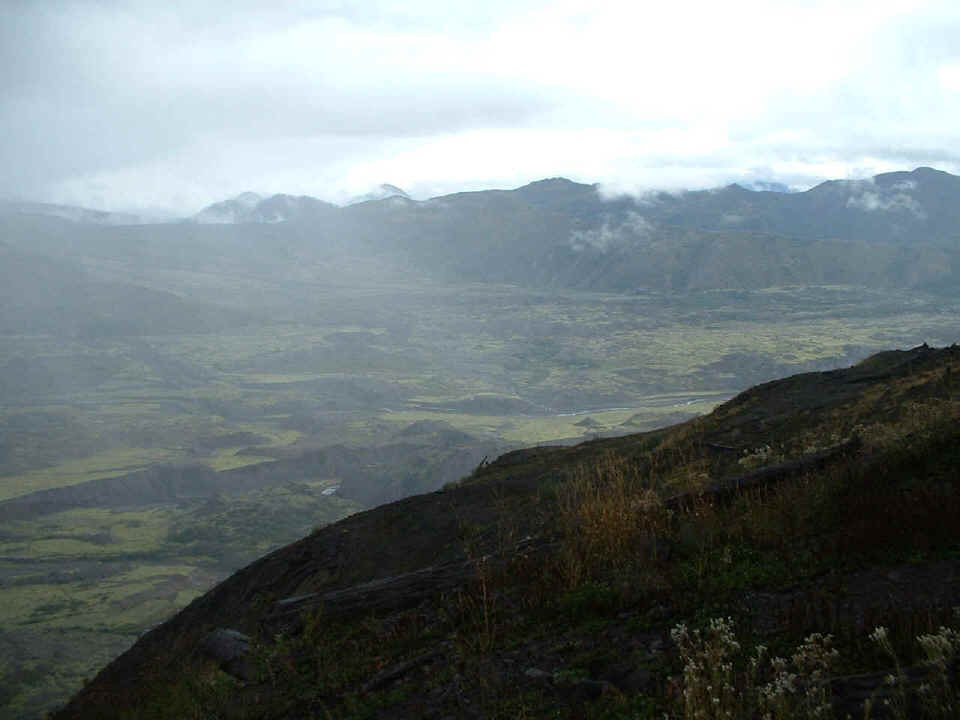 This last shot shows just a bit more snow field on the mountain and gives a good idea of how the clouds roll in around the mountain. 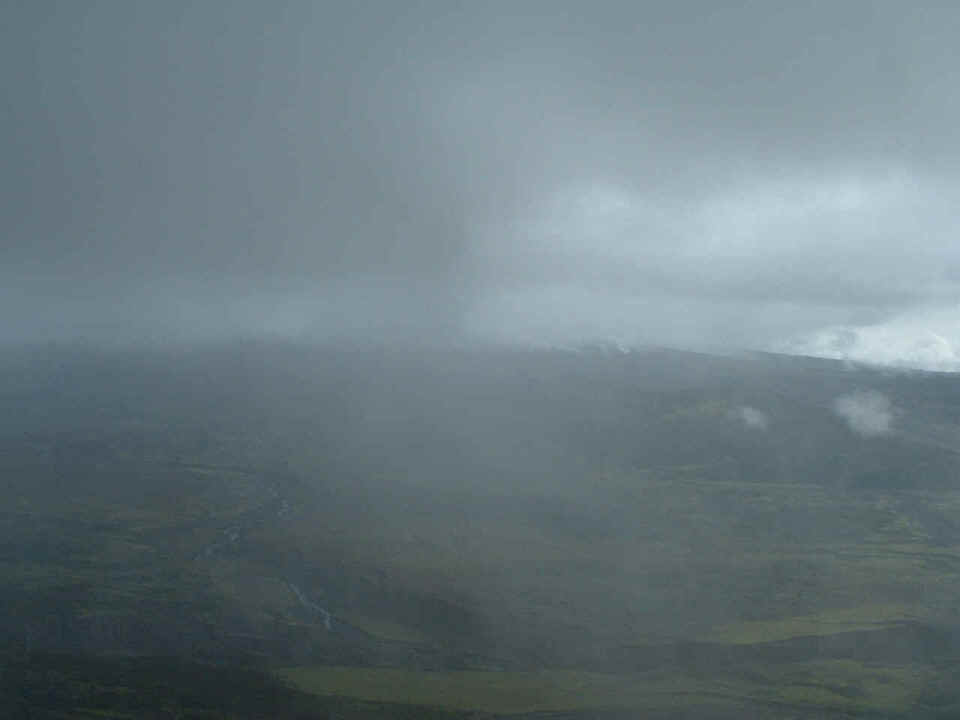 On the way down Washington route 504 at the village of Silver Lake, this sign was alongside the roadway. 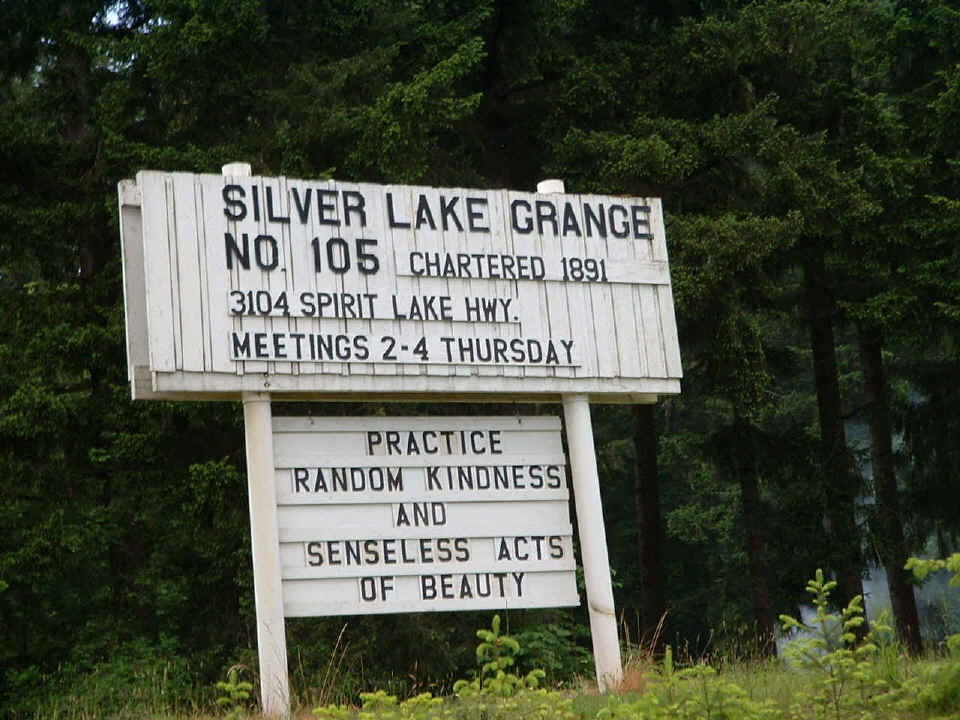